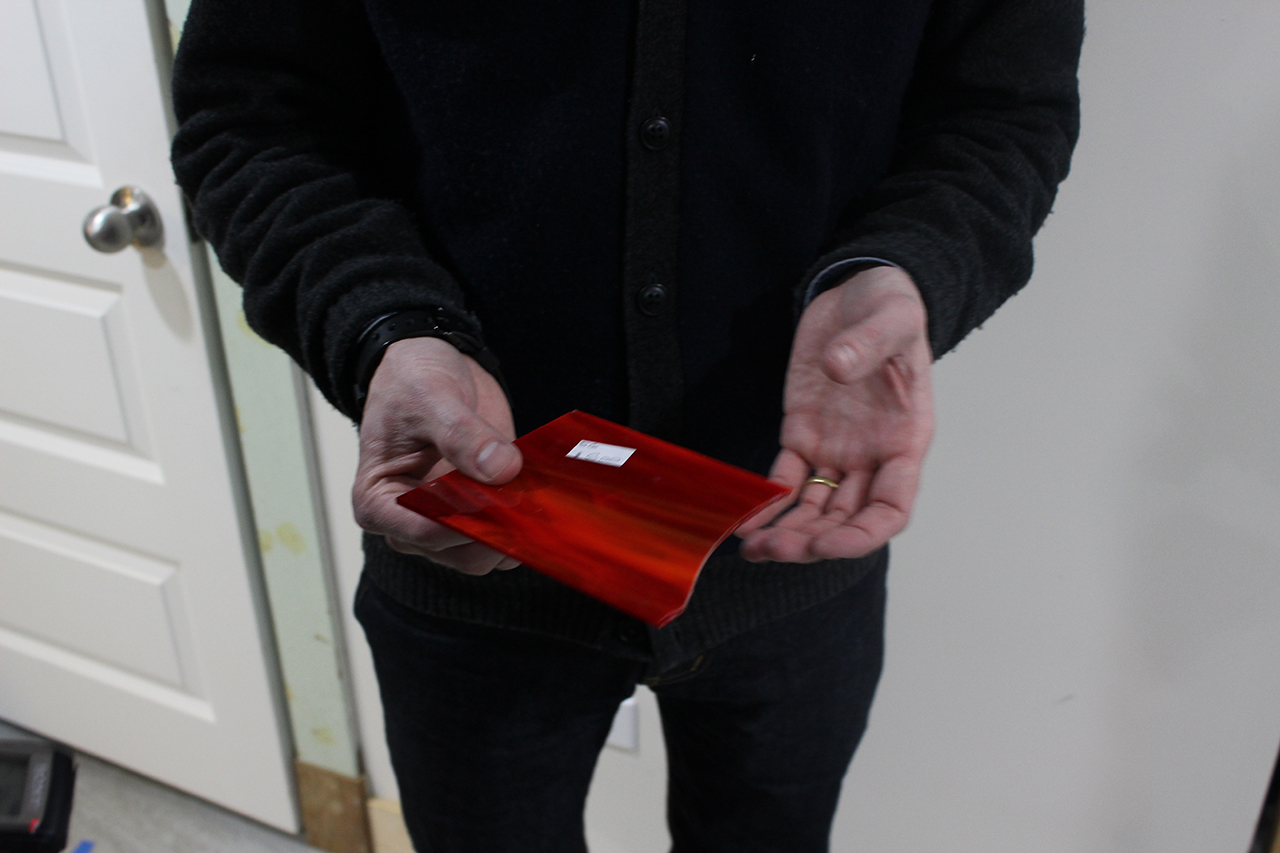 Andy’s studio resides in the basement of his Bucktown home, a floor below his family who frequently visit his space. Dedicating time to fully exploring a variety of materials, Andy consciously combines the ageless with the new to create varying materialistic depths in his sculptural pieces.

I\W: Do you make the stained glass included in your sculptures?
AH: Most of these I got from my dad who was a crafter in the 70s. When he gave it up, he gifted it to me as passing the torch. For years I didn’t really do anything with it. I did these plaster/glass experiments as a material experiment, then I started really feeling the relationship between the softness and coldness, or fluidity and rigidity. 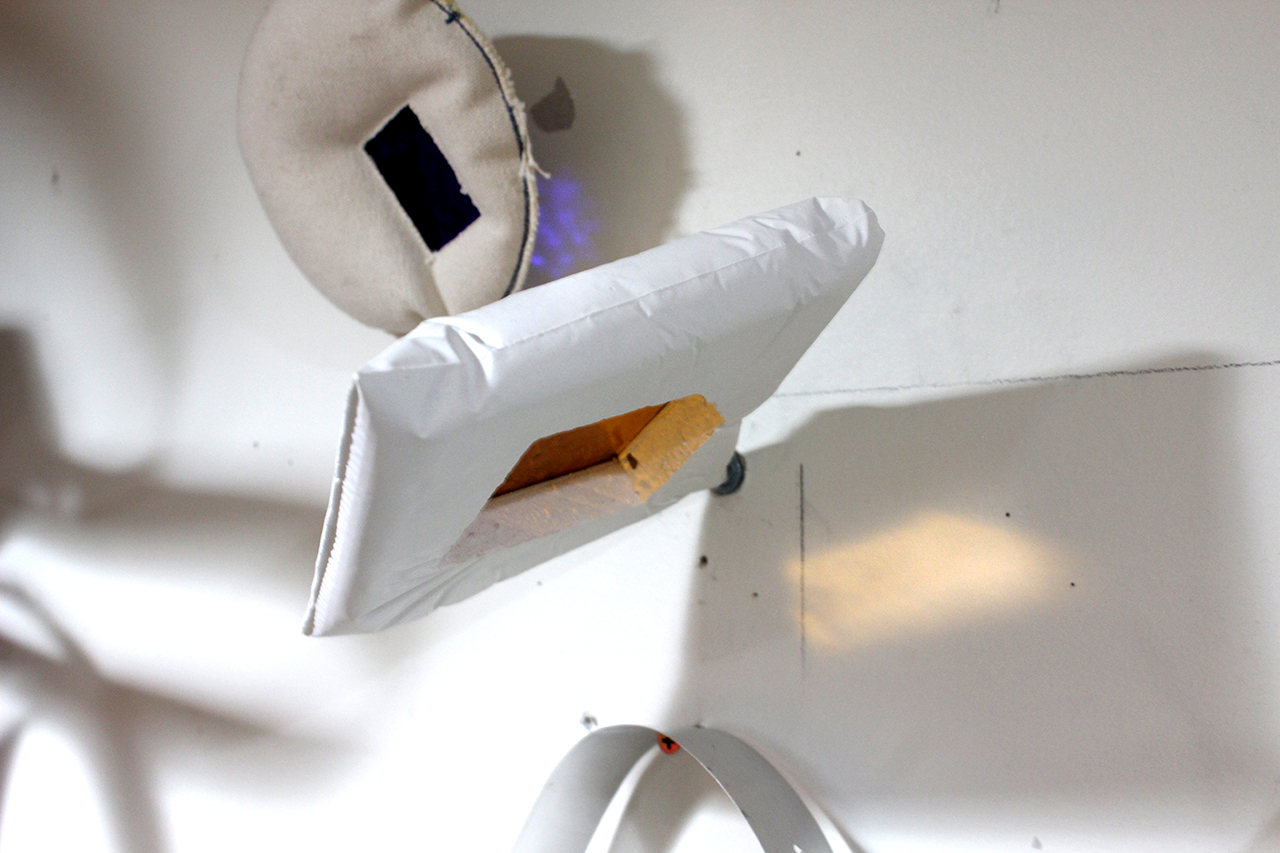 A lot of your pieces play with the patterns of light, is that an important aspect of your work?
I have a few objects that are born out of that cootie catcher, paper fortune teller game. My children and I were playing that around the house and at one point I couldn’t get the object to do the right thing. I started focusing on the wrongness of the attempt. This faux-origami. But when you put it under various lighting situations, it makes this pattern almost as a drawing. I could never get it to do the same thing twice. It does something different every time. So as a system, I became obsessed with it. What it is really is a square that is subdivided into 32 triangles. I started thinking about it as something that is elusive, and never held in one position. I was motivated to capture it. I made different scales. 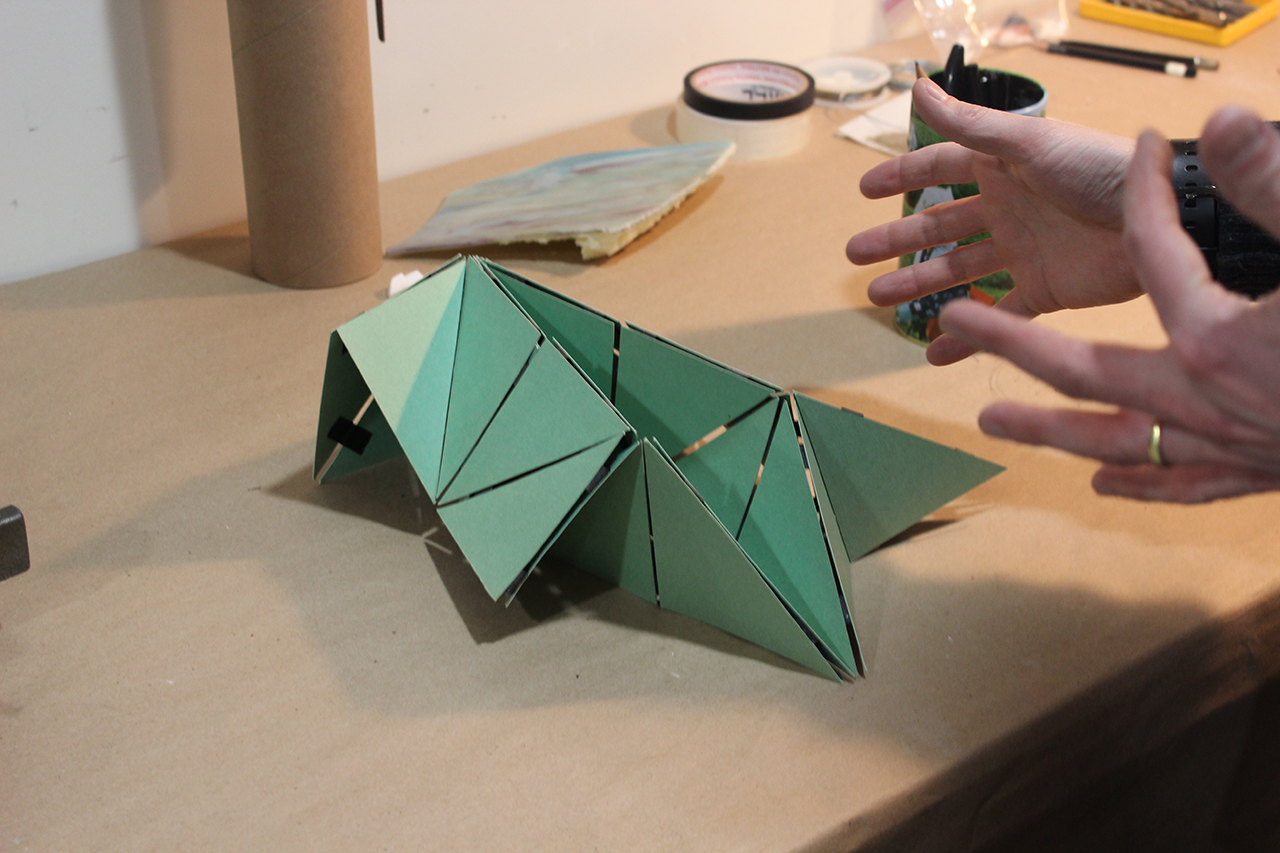 How do you decide which position you want to keep your fortune teller-like objects formatted once they are formed out of metal?
I did a lot of study models. There is this idea as a maker of stuff, I grew up studying ceramics and one of my teachers always said ‘Between the time that you start something and the time that it’s finished, how many times do you touch it?’ Kind of this mantra of efficiency. I have always carried that as a motor running in my background. I thought if I could get the square and manipulate it in only one or two simple ways—what is the most possibilities that this thing has? The autonomy of its order, or its personality is in your hands. You can now establish it in anyway that you want. However it projects or communicates with you, I want it to be a thing that does not really have function or recognition, but it is ultimately unfolding and playful throughout its existence. I wanted to do something that gave options. 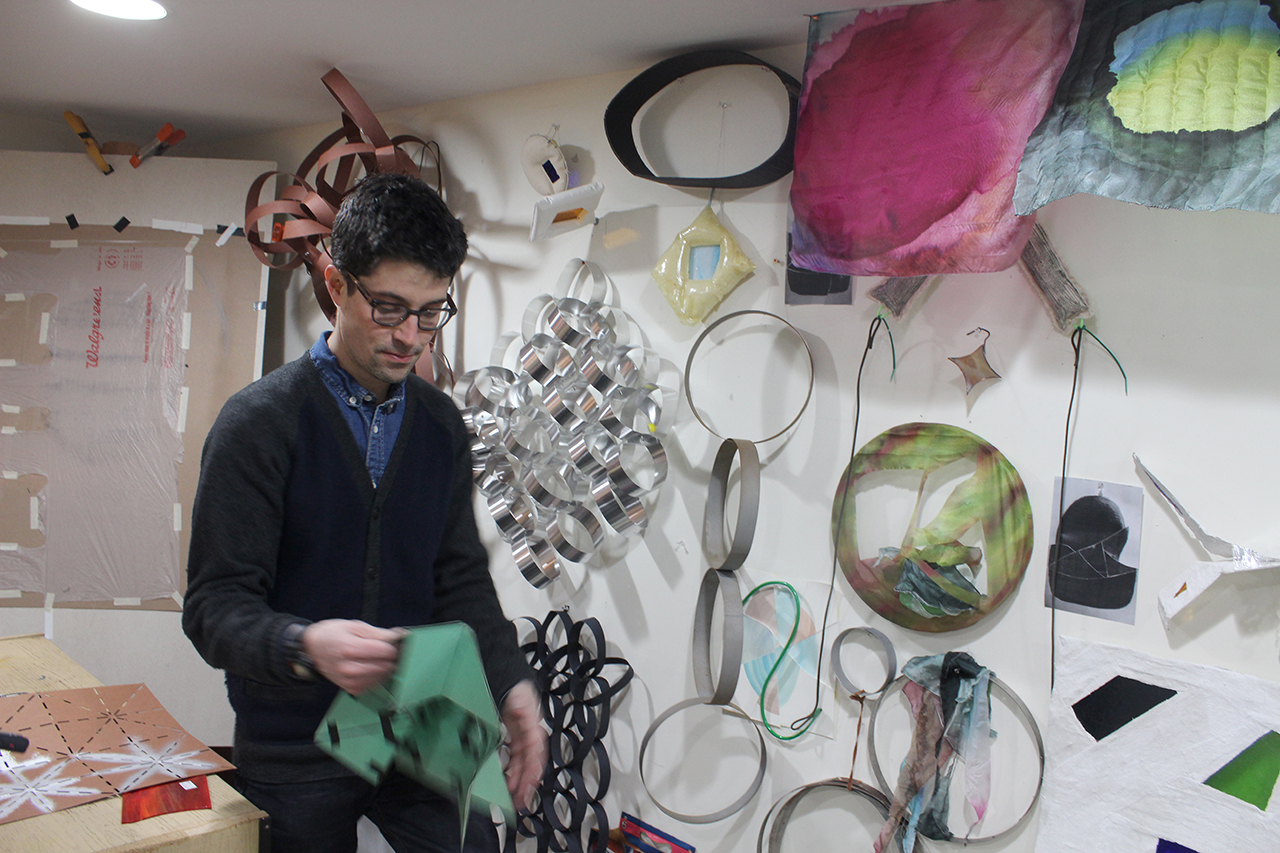 You play with a lot of different materials in your work. What is one material that you have come experiment with more more recently?
I just got into silk. Silk for me was a way to continue exploration of traditional material, one of the oldest traditional materials. This stuff just lasts. It is also really interesting, maybe in relationship to glass because they are both these supernatural materials. Silk is made by worms, and glass being a product of sand. There is something about that conversation I was interested in. Also I had never worked with silk. I thought it was an interesting contrast to metal, combining welded Corten steel with silk seemed like a real interesting shift for me. It is always rusting, the material is never the same. I really wanted to say, here is a material that is 3500 years old we know based on science that it will last that long. What if we merge it with something that we know because of the way that it is engineered, that it will eventually disintegrate. I like the balance between those two. It is highly unlikely that the world will exist that long, but if it does it will be interesting to see what happens. I put the sculpture on these 3D printed hardware parts that keeps it off the wall. These pieces are the unknown. We don’t know what they will do. It seems like it is durable, but it is the wildcard. You have the ancient material, the one that we know is dying and the one in the middle we don’t know. 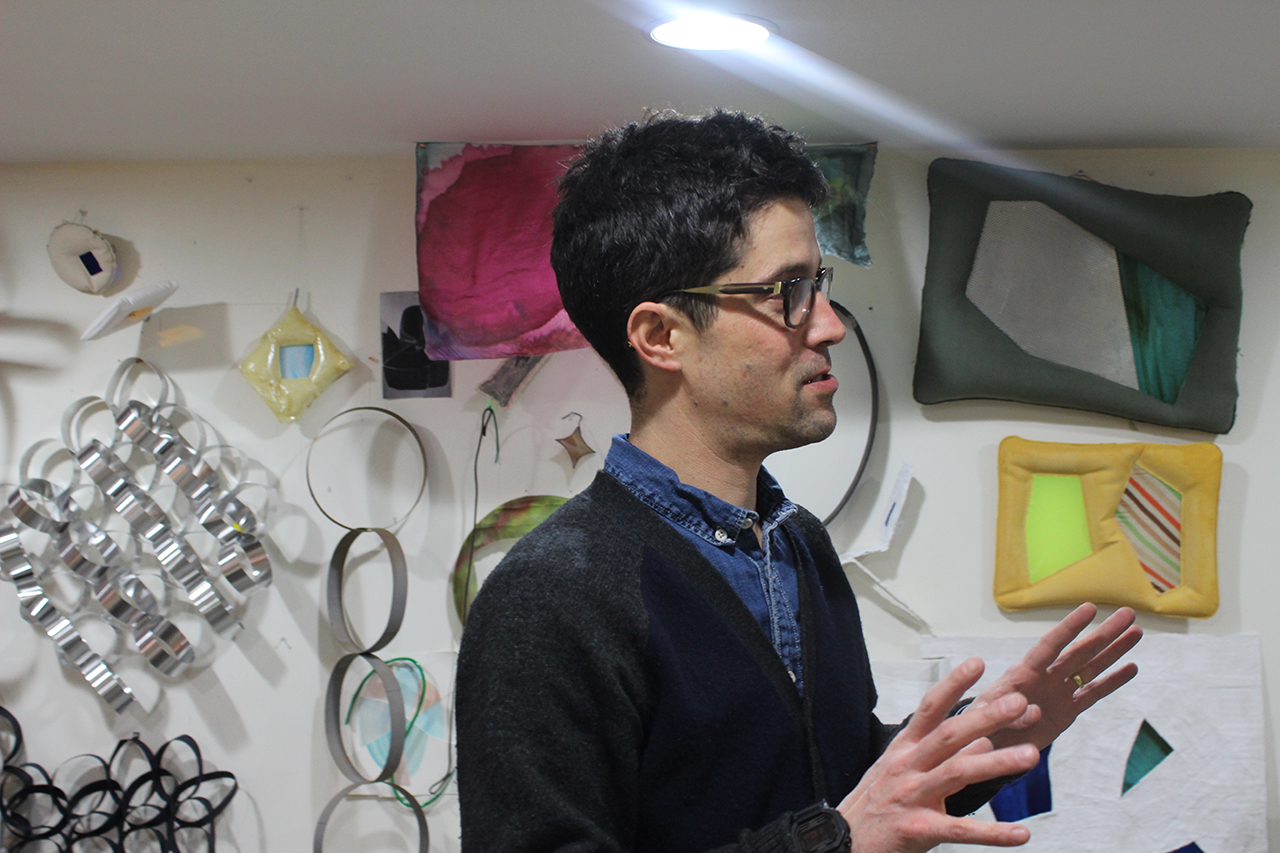 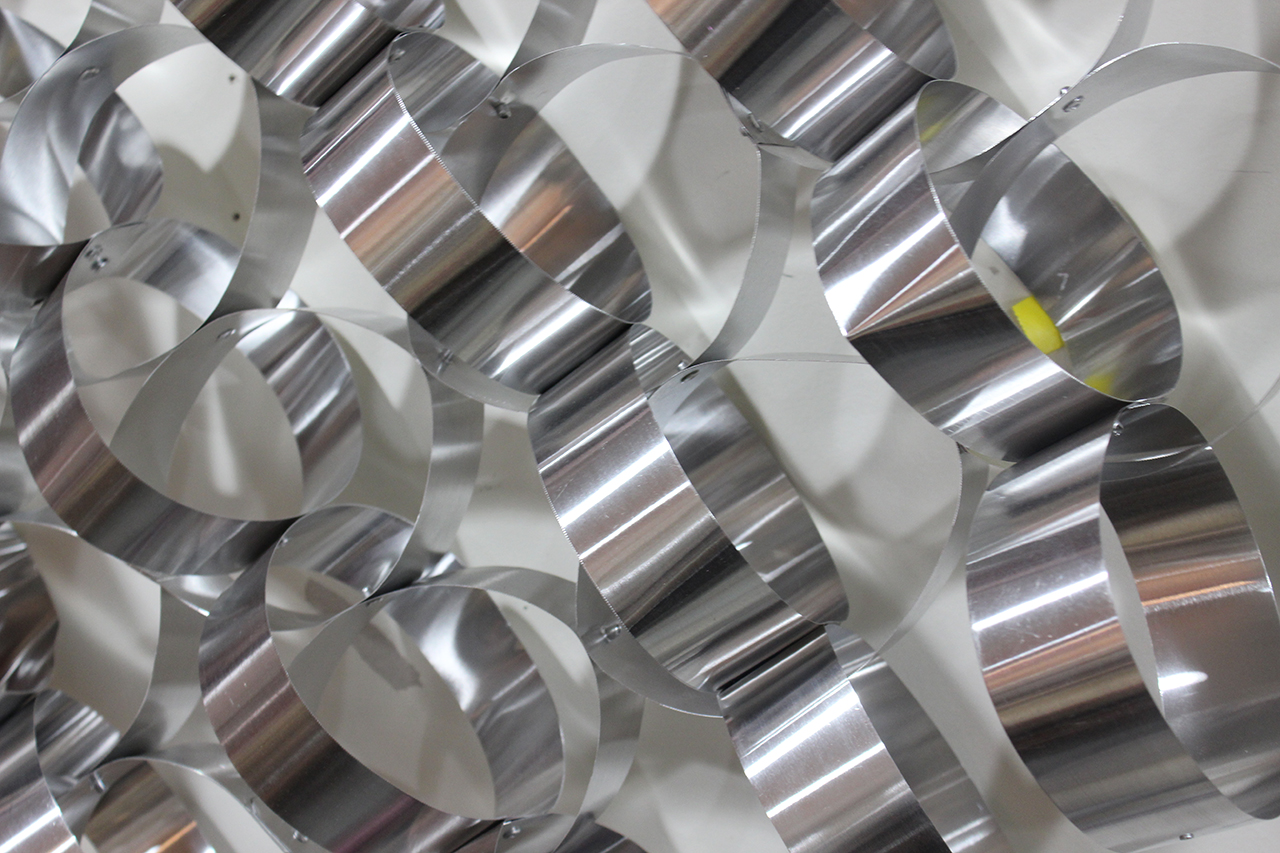 What inspired you to create your TGIF piece?
The TGIF piece was made in ’02 and at that time I was doing a lot of reading of sustainable design. I moved to Chicago from Vermont, which is the soft energy capital of the world. The piece was born out of listening to the radio as a kid, the whole TGIF program, and how that influenced my relationship to the work week and how definitely people cut loose on Friday. Thinking about this cold technology, but at the same time it was not cold because it was powered by sun. It felt human and universal. I started thinking that my interest in this stuff could become conceptual sculpture. I built it for a site that is adjacent to the Green Line train. The initial intention was to provide, for this one month, this icon of every Friday there would be this thing that you can anticipate or release your own tension through. Ever since then it has been shown around a little bit. It is always funny to show it in a gallery context because for the most part when people visit, it is not on. It just sits there. It is only on on Fridays. 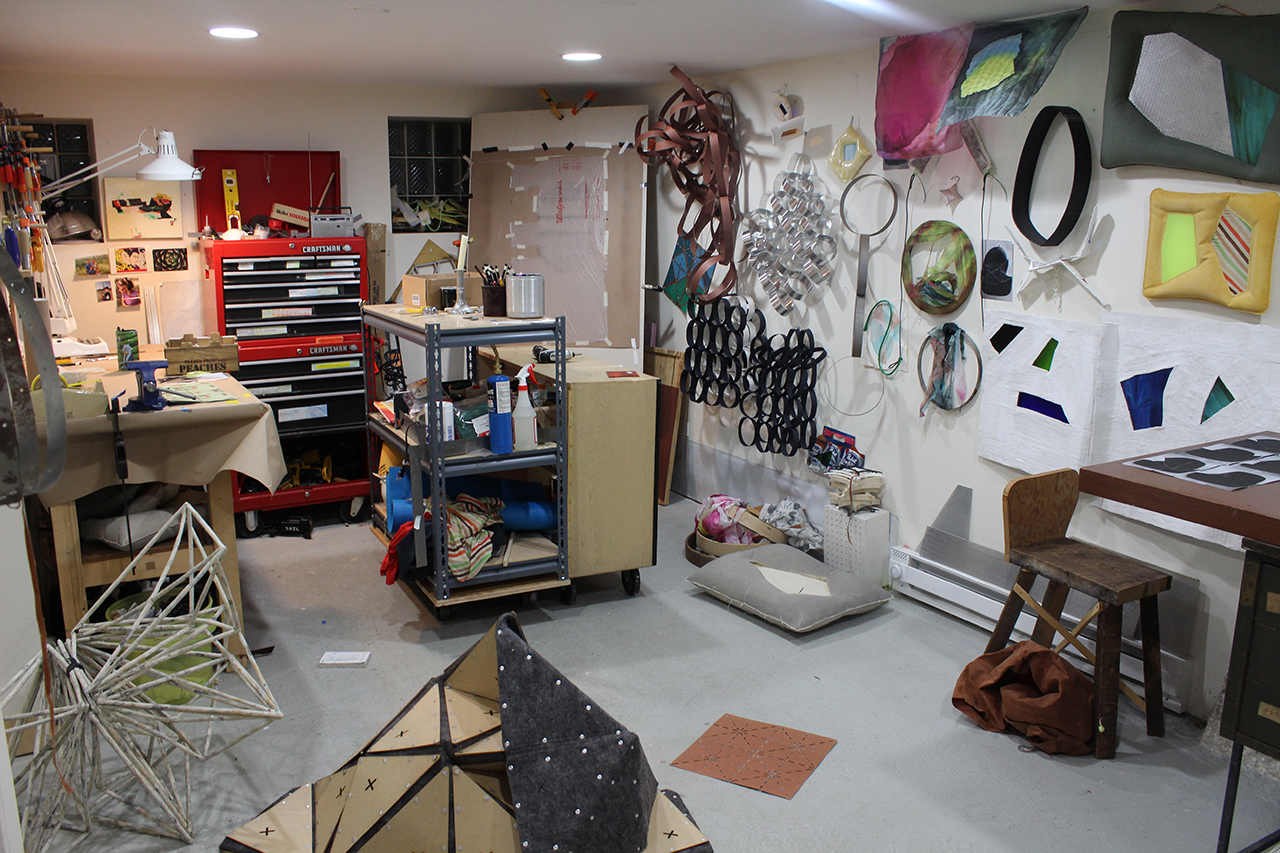 What is your relationship to the work week?
I have two kids that go to school each day. We have a pretty regular schedule. As a faculty member, I teach three days a week so there are two days that I have studio time or whatever needs come up with the family. When I was younger, when I was an undergrad and after undergrad and after grad school I worked some 40 hour jobs. They were always in the trade. I come from a place that is very blue collar.

How do you balance your studio life with having a family?
That is part of the reason that the studio is here. It is the old farmer mentality of living with the work. It is easy for me to come down here between eight p.m. and midnight. It is also easy for me to come down here between six and eight a.m. or when I get home from work for an hour, or my kids come down here and rock on the drums and play the keyboard while I do stuff. So for me it is kind of essential to have this here.