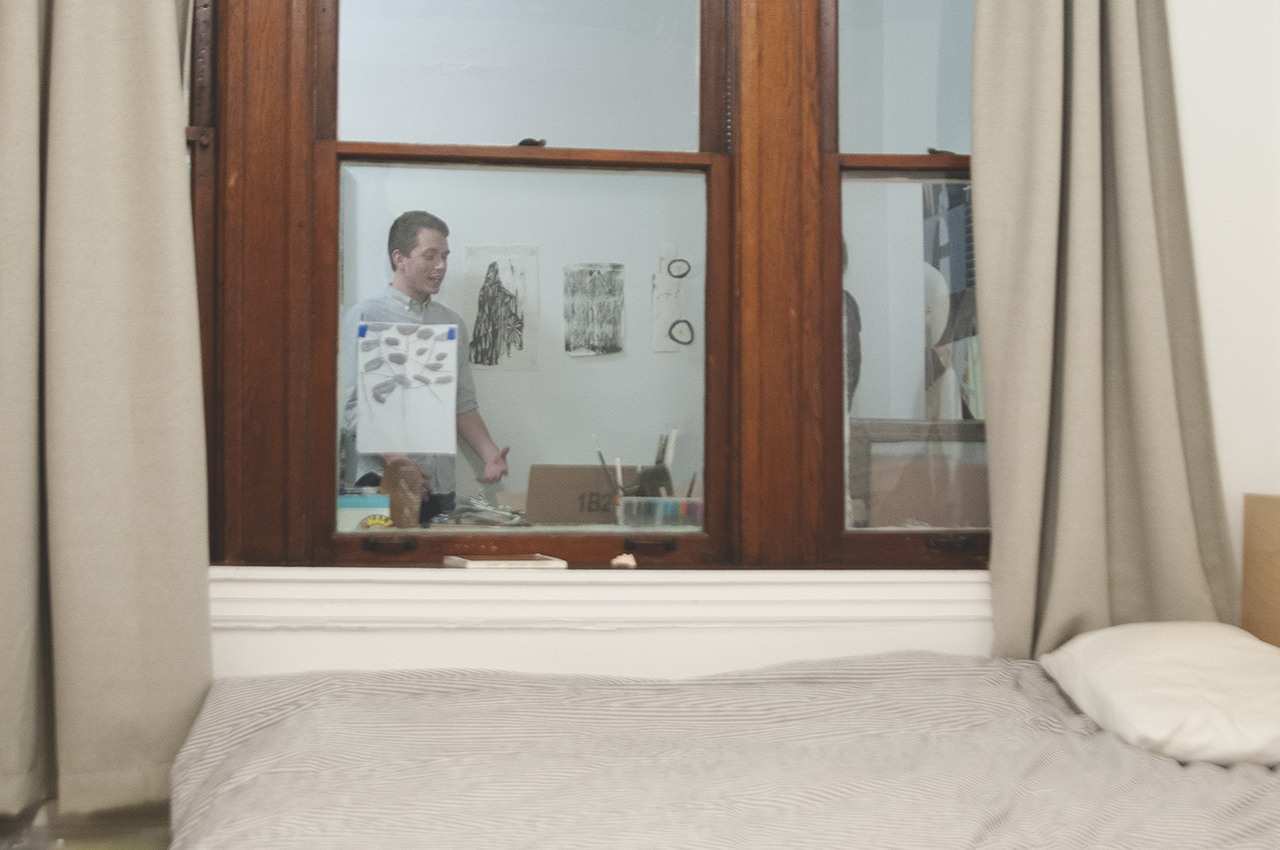 Wyatt paints beams of light onto his darkened landscapes, their presence often growing to act more as characters to the narrative rather than visual attributes. Previously focused on printmaking, Wyatt harnesses the practice’s devices and methodologies to create layered scenes akin to juvenile sets, his cut-out and painted figures taking on the appearance of props on a stage.

I\W: How does your printmaking background inform your current practice?
WG: I made prints mostly in school. I didn’t make editions usually, and worked mostly with fabric as a substrate. Printmaking was a medium that helped me create images while employing bizarre processes, and greatly subverted my expectations. I didn’t really focus my practice in painting until late in my college career, but I think the step-by-step layering process of screen printing helped me plan my intentions out. A lot of my paintings start with a geometric preoccupation, and they tend to build from there. There’s a chance in printmaking to freeze smaller, isolated parts to an image that I really liked. Transitioning to painting in that sensibility was a bit difficult at first. 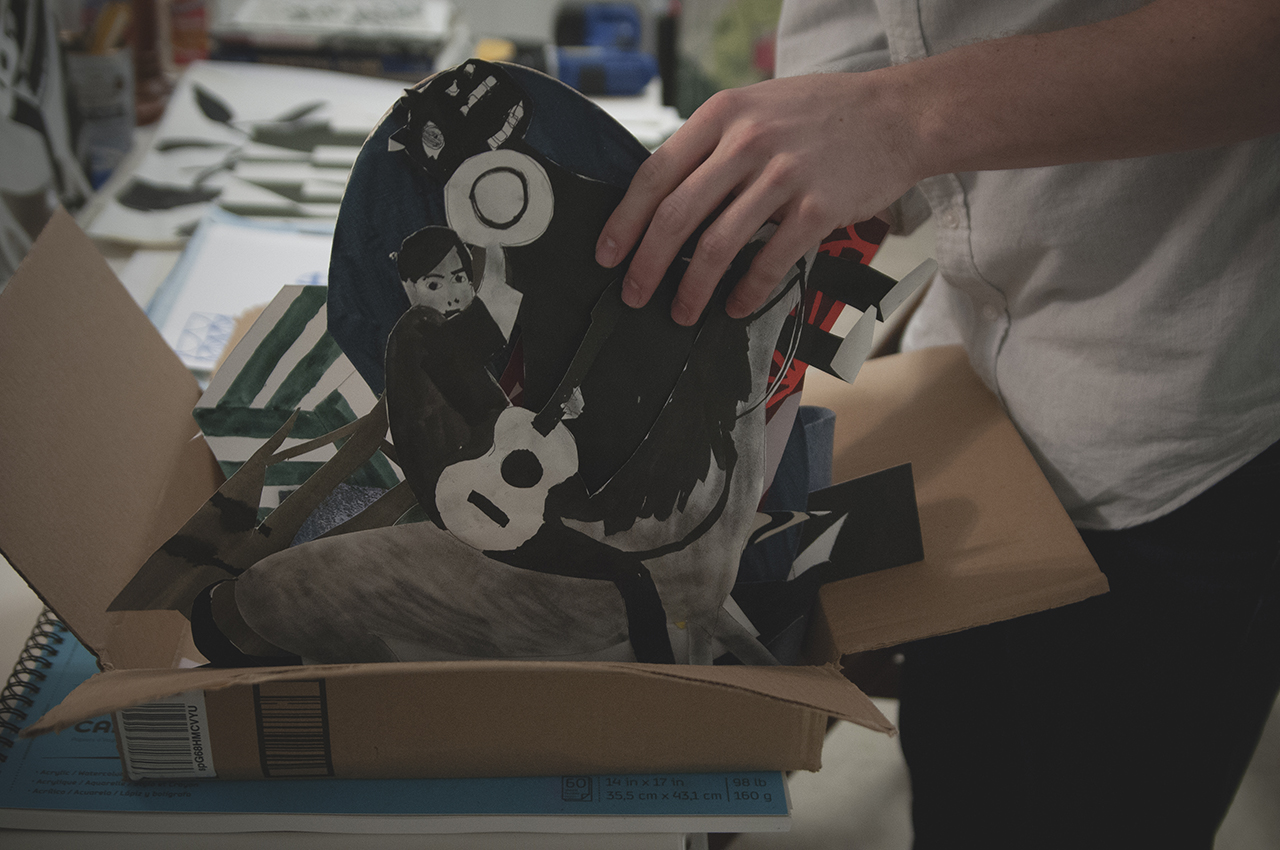 Do you feel like you are more committed to your painted objects because of this history of freezing moments?
Weirdly enough I started making tracings of the objects and characters I wanted on my canvas. I used to throw a lot of them away once I finished a painting, but I have picked up the habit of saving them. I will draw out the figures I want to have on a painting and trace or freehand them based on a rough “demo” of their form. I saw back in school that Henry Darger did something similar, and that resonated with me. It makes the concept of authorship a little more dynamic and complex. Likewise, when I was making large screen prints, every image started as a black and white layer that I could work on at any time or place. Recently, some things that started in an isolated mode of making stayed isolated, like the freestanding works in my most recent show of PLHK. 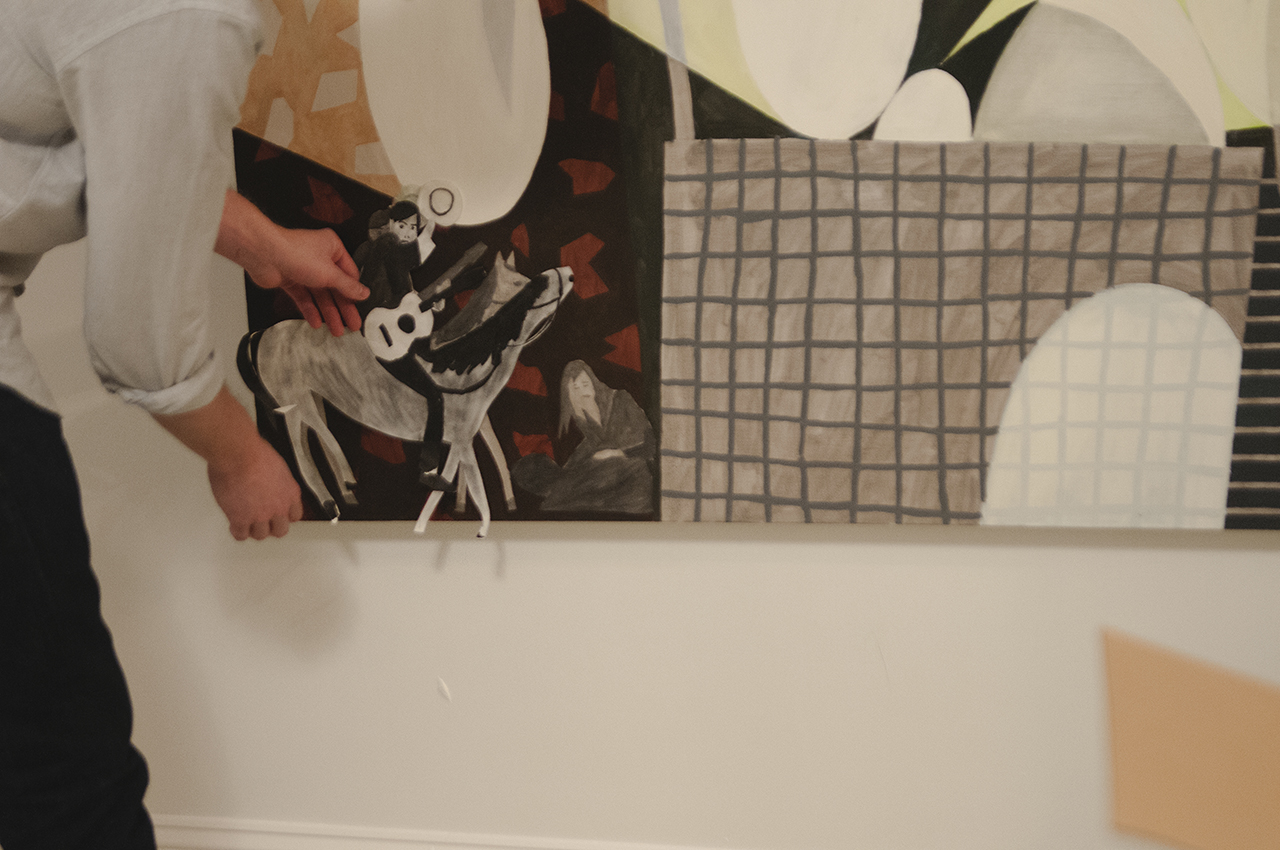 How do your works relate to theater sets?
I wonder if people arrive at that conclusion naturally because I do like to reference it a lot. David Hockney, Luc Tuymans, Picasso and many others have made stage designs, which prompted me to explore it literally. I think there’s potential for each element to come from a different origin on a stage, almost to an exaggerated extent. These pieces meeting together in the same place is important—they are not completely united. I like that there is some sort of tension between one style that seems totally alien or abstract, and another that seems familiar. I like the feel of a painting that looks like the process of a juvenile set design. You might think of a variety of hands painting a set. Maybe one kid makes the backdrop, another kid makes the roof, and then halfway through painting the horse they run out of paint and they have to mix a color to match. I like that sensibility because it is true to what people experience internally, and it helps preserve the exploration that takes place. The “stage” element of some works has become pretty deliberate, and I am still investigating it in a way. 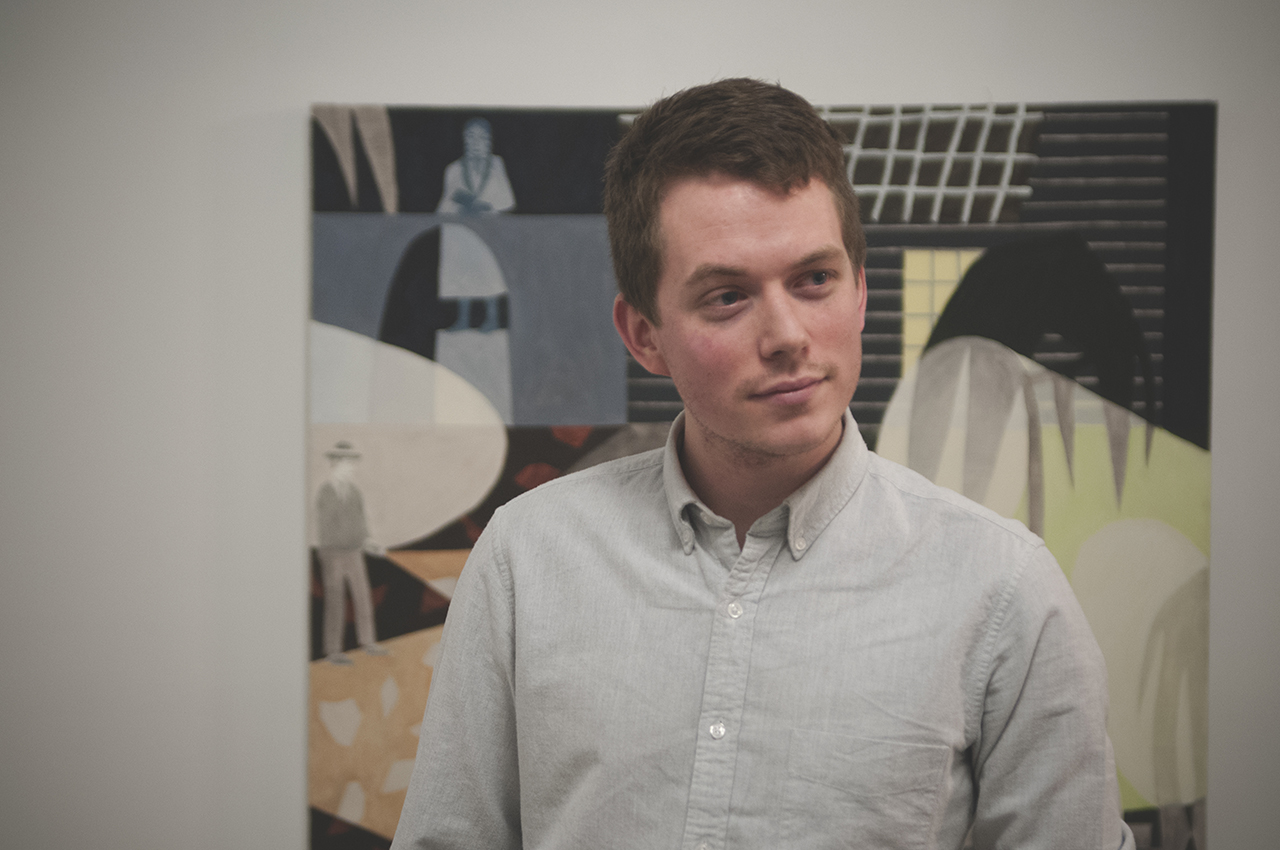 Were your cut-outs at your recent show at PLHK a more intensive study into that staged idea?
Yes, definitely. I feel like it was a venue for all of these different elements I had been working on in the studio. The elements came from different times and places, but it was all while I was digging into characters from books and movies and experimenting with different drawing styles. It was a way to work on these things individually, and then not know what they were going to look like, just put them in their places. It provided the same sense of branched out faculties that screen printing did. Objectively, I realize that people are looking at a miniature set design that was constructed kind of haphazardly in a bricolage fashion. It doesn’t sit like a painting to me—there’s a sense of desperation in it that feels comical. In the show, I tried to deal with my own sometimes myopic tendencies as a creator and to both celebrate and poke fun at that condition. 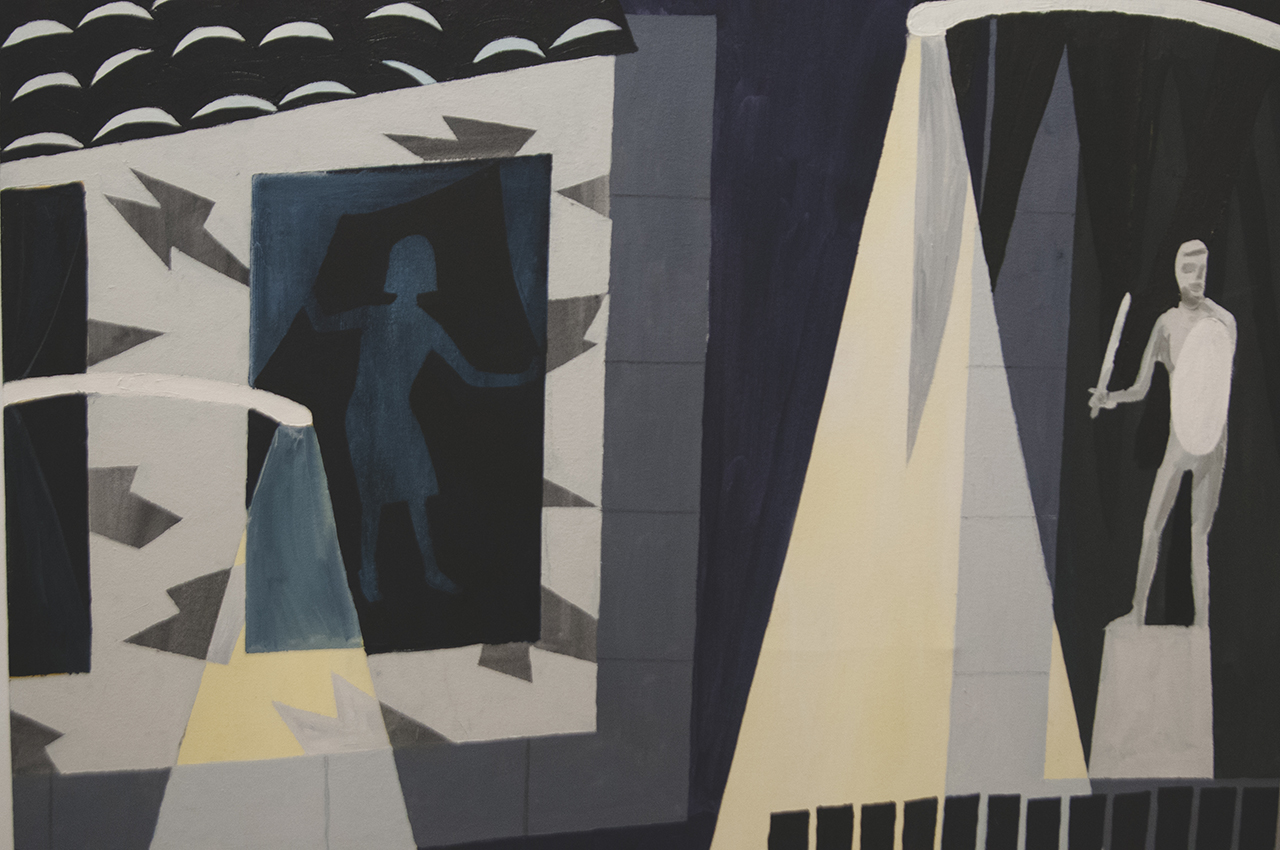 What is the intention behind the heavy blocks of light you create within your paintings?
I’ve always been drawn to using visual phenomena like smoke, beams of light, etc. A lot of these paintings are based at night because the subject matter is more in its place, and is a bit more cerebral and dramatic. The light devices impose a supernatural and abstract element on top of the paintings’ landscapes, so it’s another tool I like to bring along when forming scenes. Giving these abstract elements such a visual precedence in an image hints at the possibility that they are more than they seem. Maybe these everyday phenomena trigger something symbolic, or grow to personify a new character. 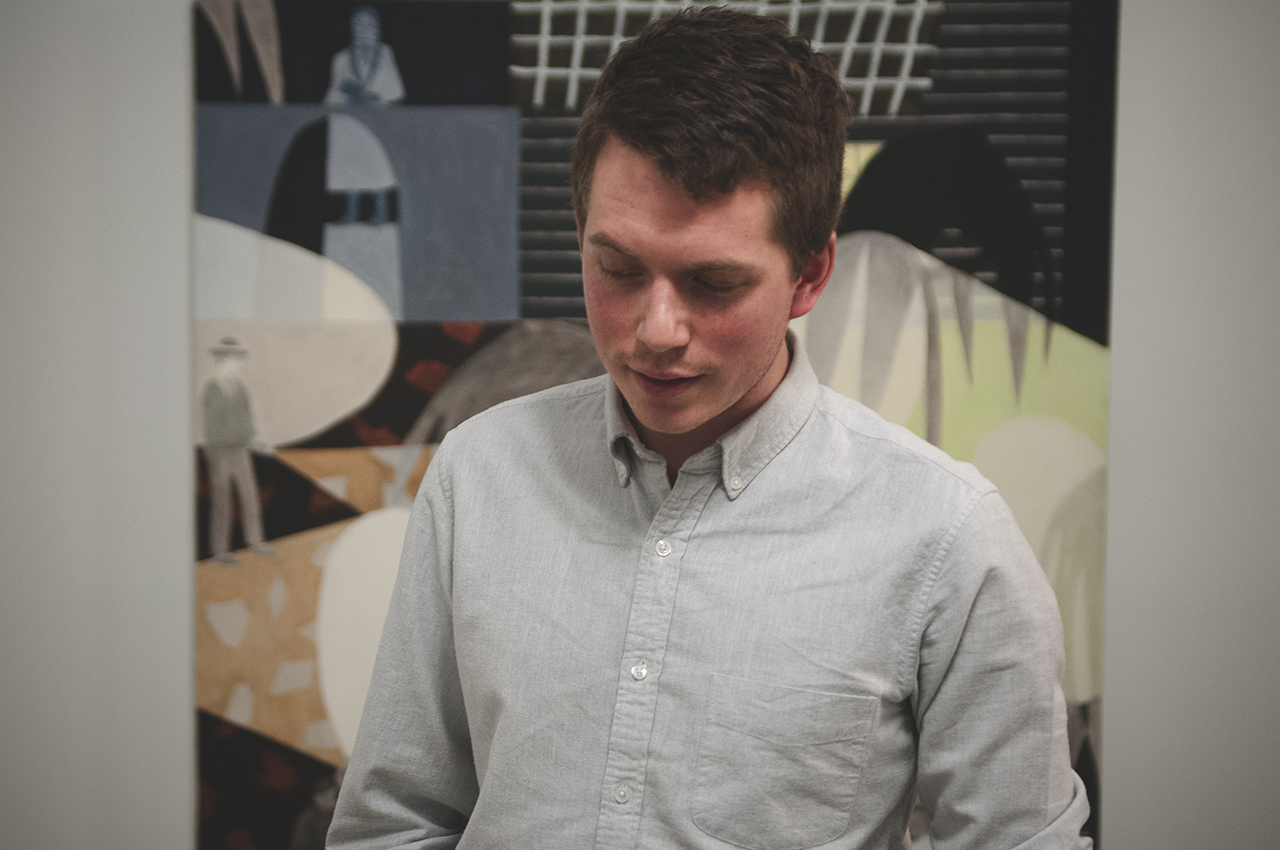 What new direction are you going with your work after your show at PLHK?
The show was devised pretty quickly. It sprung directly from my studio practice—a lot of work was still in flux. Instead of starting from a place that was solidified and polished, I wanted to keep it in that primordial state. A lot of the works in the show were based off of these preliminary ventures with graphite and indigo pigment which then generated collages. I seemed to move further through making smaller, quicker works which allowed more flexibility for what could come next. I’m most likely going to move forward in that way. I’m open to the possibility of it evolving into a larger scale, or possibly toward the form of textiles. 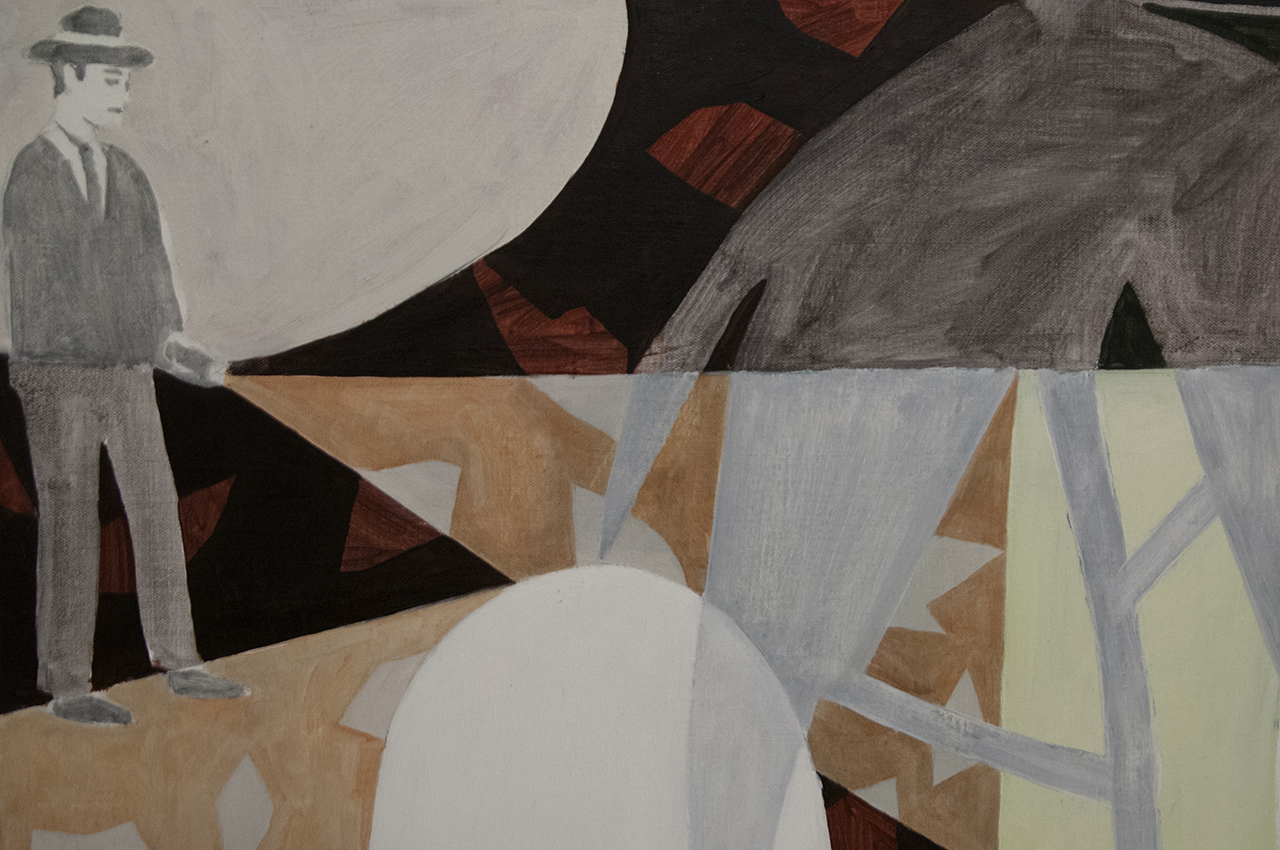 Your studio is a really interesting set up with your bedroom looking directly into your workspace. Is that inspiring or terrifying for you?
It’s odd, for sure… It reminds me of the movie Rear Window where I’m put in this voyeuristic situation, but the distance is pretty critical. It’s tethered to this sort of domestic side of my life, the activities that you have to do in order to not go crazy or get lost. When you’re surrounded by your work all the time, your ego can get a little imbalanced and the studio can have an oppressive force on you. But for me, so far, the situation has helped me continue a steady circulation with my work. I like making my practice similar to Rear Window in the sense that I can make some cryptic meanings out of what’s in front of me, even if those conclusions can be rearranged.