Working equally between painting, print-making, and blogging, David produces content inspired by Youtube comments and the week’s current topics of obsession. Trained in painting, he adds elements of craft onto his large canvases, subtly layering felt, googly eyes and glitter as collaged additions. Often generating dark subject matter on his own, Leggett also turns to his blog for viewer requests which can take his drawings and stamped images into even darker dimensions.

I\W: What is the most recent series you have been working on?
DL: Basically everything in my studio is recent because I tend to start on everything at once. Pieces are things in my studio that I have been working on for as long as 2011. It’s a constant start and stop with my work. I think people think I am more prolific than I am because I just start everything years in advance and it finally gets to a place where I decide it’s done long after. There is a lot of standing back and staring at a work. If I cannot think of anything else to do, or if the concept just feels right, it’s done. 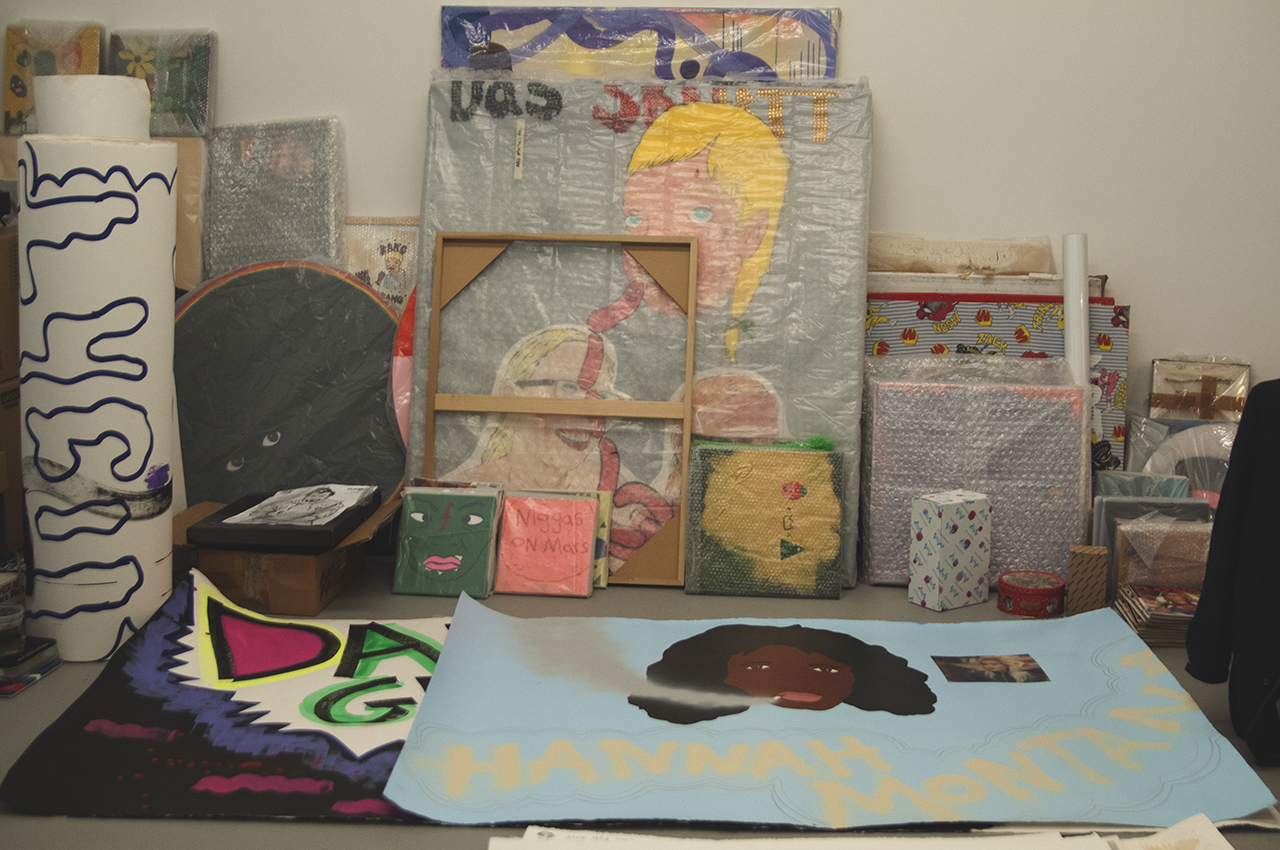 Was your blog, Coco River Fudge Street, a way to push yourself to create more continuously?
I was working on a collaboration while at at Skowhegan. When I moved back to Chicago I didn’t really have anything going on, and I wanted to continue the strength of that collaboration. I was also hoping to do something that would allow more people to see my work. I thought if I could get stuff out weekly I might get some traction, and eventually I started to get some exhibitions out of the process of making work for the blog. I started a more open-ended collaboration by accepting works requests from the Internet every Tuesday. People would send me words or whole phrases for me to depict. Many were extremely strange. At first the work I was producing was just scribbles, but eventually the work became more serious and less like like mini sketches. Now it is pretty automatic and I typically use ink, rubber stamps, and colored pencils. A lot of the content for the blog drawings come from pop culture and comment sections of Youtube or Worldstar Hip Hop. Whatever is going on that day in pop culture or within one of the many comments I screen grab daily can be a springboard to a drawing. I love reading the mean comments from websites because I feel they tell a truth about someone’s character with how they chose to live online. 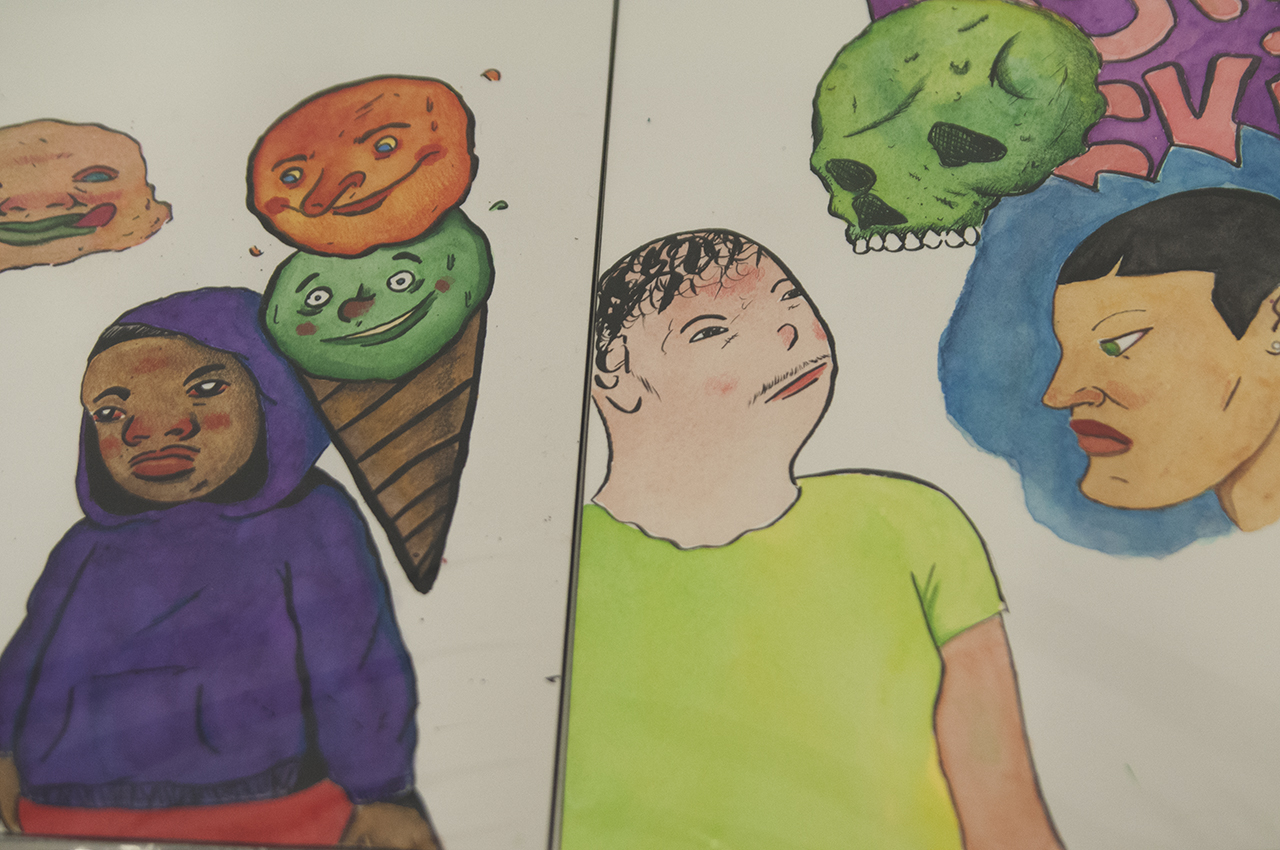 What was your biggest attraction to the Imagists, and how has that been reflected back into your work?
When I was in undergrad in 2000 I stumbled across their work in an art history book which I still own. It had work by Jim Nutt, Karl Wirsum, and Ed Paschke. I was an illustration major at the time and I had never seen work like that. Looking them up 15 years ago was nearly impossible. Looking at pop artists seemed more cold, the artists didn’t really like the things they were representing. It really seemed like the Imagists loved comic books and the low lifes. I liked that stuff at the time too which is what really attracted me to them. It didn’t seem like it was a dig at pop culture, but more of an embracing of it. That was interesting to me because I felt artists shouldn’t like what was considered lowbrow at the time. It felt freeing to me and my work.

There is an initial response to my work where people typically laugh and then they look at the piece longer and realize the joke is actually on them. Some works have racial, sexual, or religious humor. Often the viewer will become upset they laughed at something that they may consider disheartening. 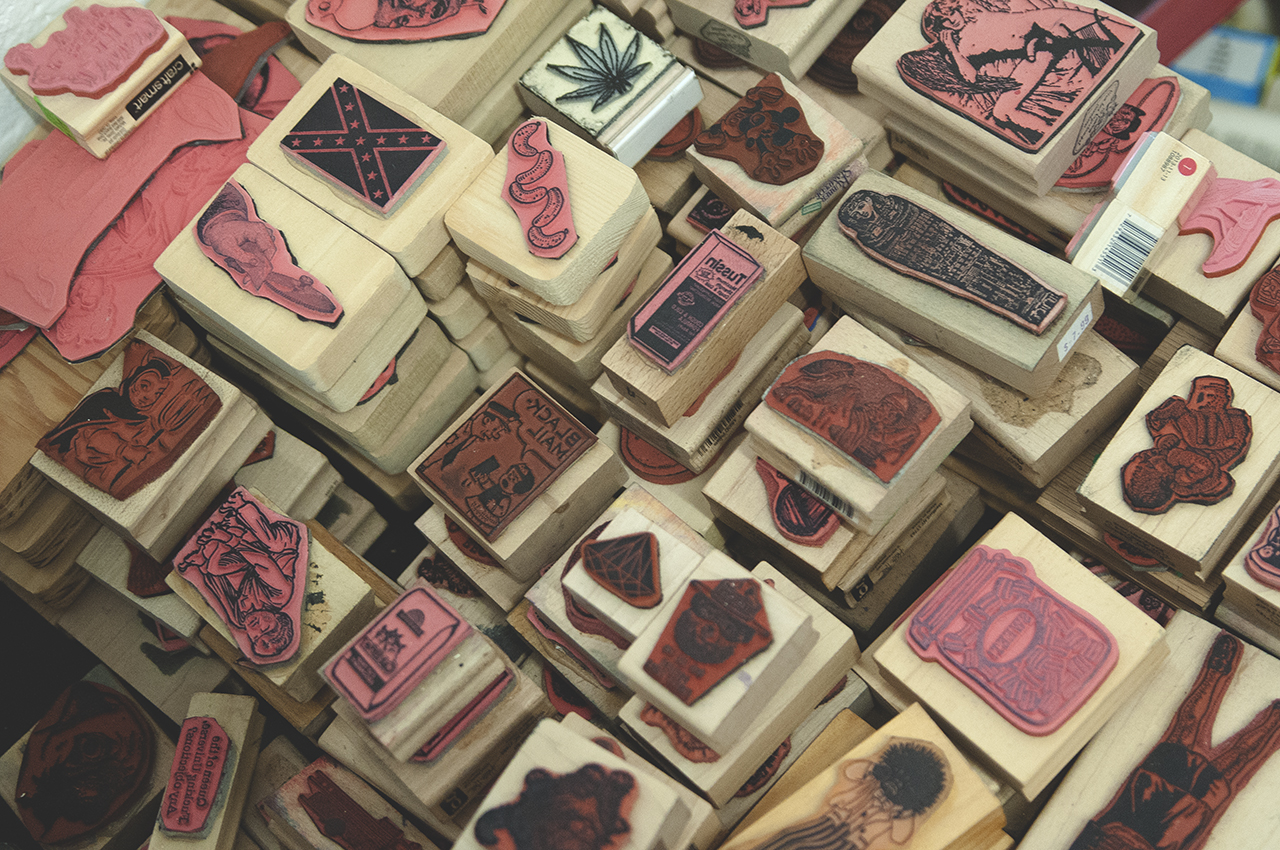 Do you view your work as subjective?
Sometimes I place my full opinion into the work and then other times I stand way back from what is on the canvas. I am never trying to be the moral guy for anyone. There is an initial response to my work where people typically laugh and then they look at the piece longer and realize the joke is actually on them. Some works have racial, sexual, or religious humor. Often the viewer will become upset they laughed at something that they may consider disheartening. To me a lot of the the world is too tragic to not throw your hands up and laugh. Being a former illustration major, a lot of the artists I looked up to were satirists like Ralph Steadman and Gerald Scarfe. They are much more hit-you-over-the-head with their work, but I always appreciated it. People don’t ignore images as much as they might the written word. 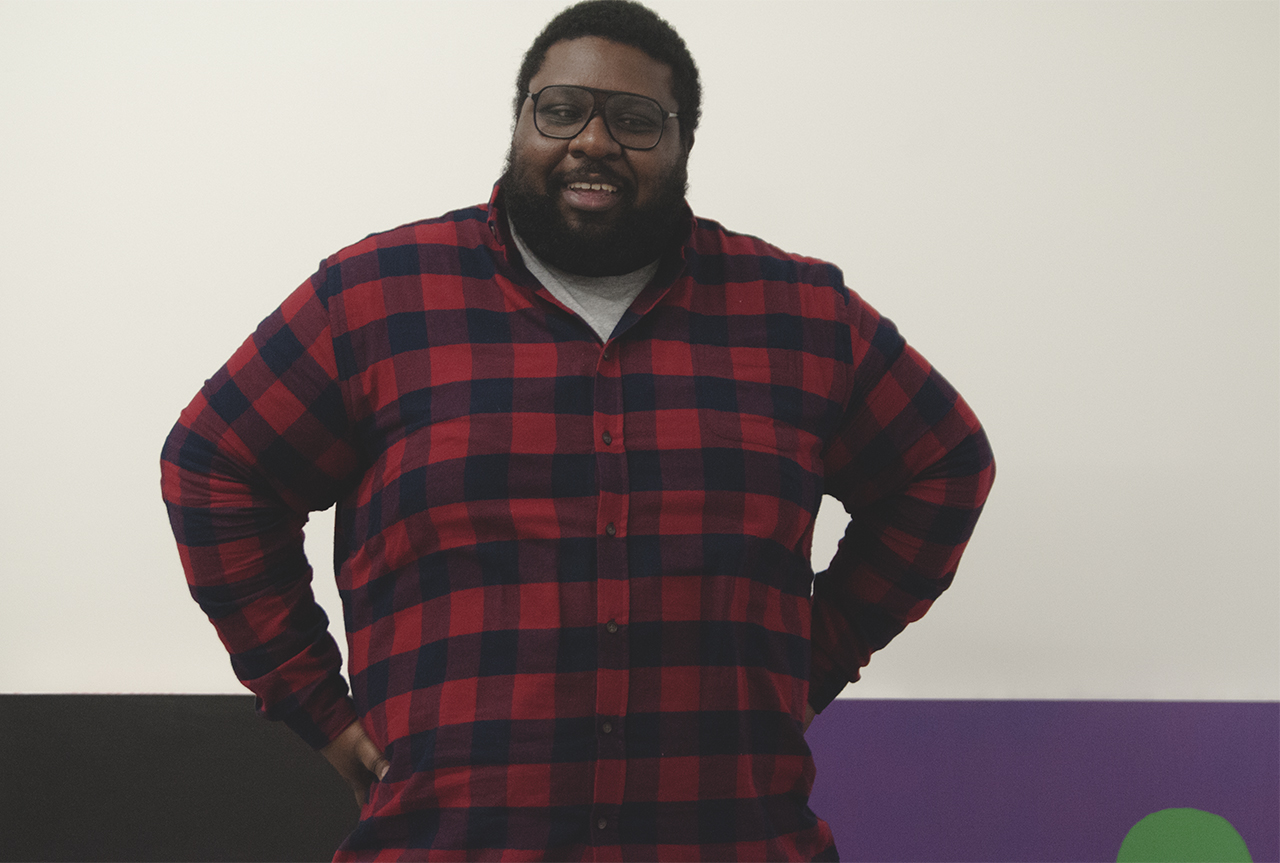 Is your interest in craft materials a way to more deeply connect with popular culture?
I feel like many people use craft materials in the same way, where I try to do it a bit differently in each piece I make. Once you add in craft materials you are trying to problem solve. How can I work this mess of glitter into this piece? How can I make this felt work? I don’t trust myself being a straight painter. I love painting, but I need to add a college element to add more to the work. I feel like people can be more attracted to craft materials at times. They are accessible. I don’t want the work to have glitter everywhere, I feel like it can be much more effective when they are added a bit more subtly and where the audience has to figure out what the materials actually are. Craft materials I use the most are felt, googly eyes, and glitter. They have the most familiar feeling to me. 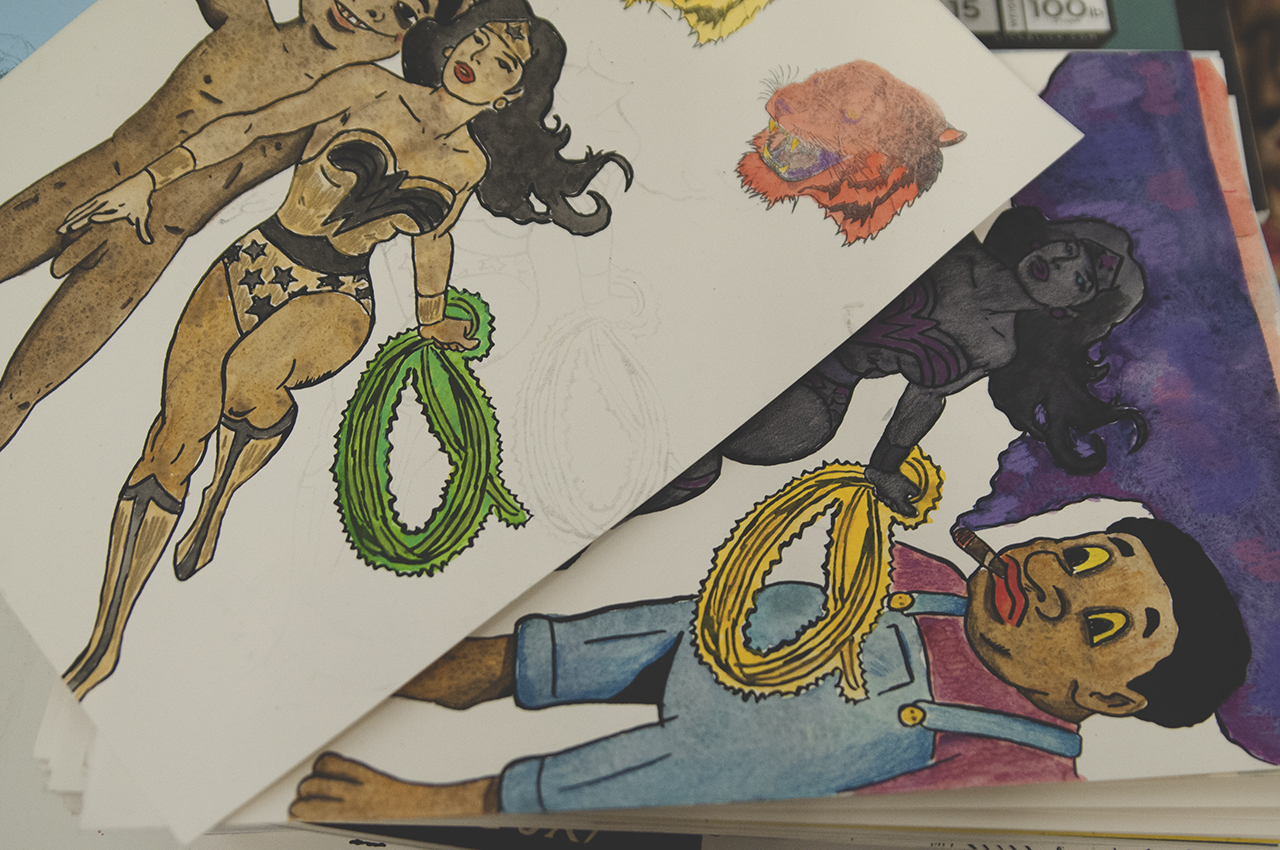 Why do you not view your work as controversial?
I feel like we can all think of ten things off the top of our head that are much more controversial than a drawing or painting. There is nothing in my work that is more fucked up than someone living in this neighborhood who can’t afford water or heat. I feel like there are people that really try to push the envelope, and that is not what I am interested in. I never know what people are going to think is controversial. I often wonder if it’s the current climate we live in that makes the work controversial. I get asked about being worried about blowback from people online due to the content in my work a lot in the past year. I never was asked this before. I think people are more politically correct lately and look for things to upset them. To me the blog is such an automatic thing. It is whatever is at the top of my head or what is going on that day—there is no filter. That is the difference between the paintings and the blog. I can think a little bit more about things when painting, I can paint things out. But the blog has to go out the same day and I refuse to work on it for more than an hour. 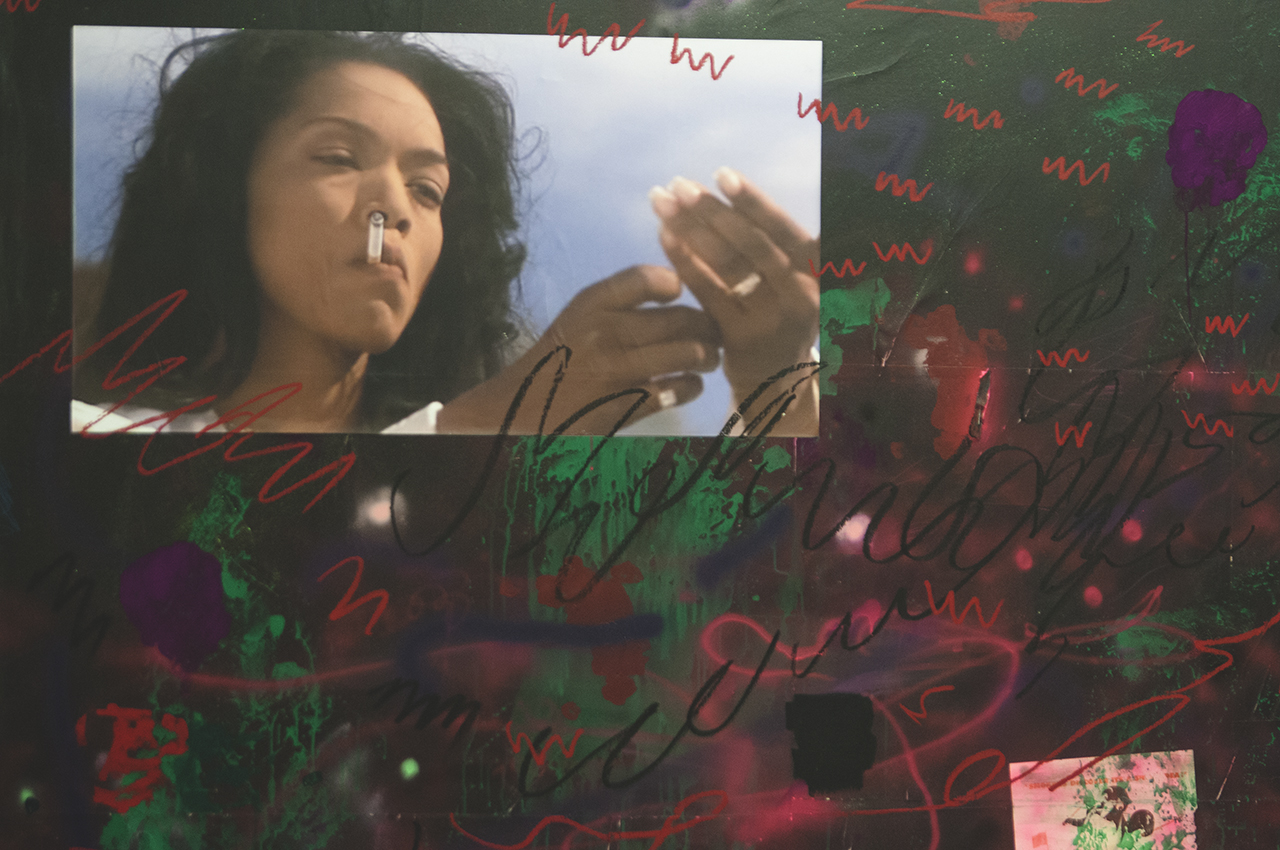