Entering into Aaron’s studio you immediately encounter several projects in different states of decay—loaves of white bread transforming into gruesome piles of sludge, and past-due bologna twirling above your head while other slices discolor the walls. Originally focused on video, his practice is more concerned with the process behind each of his pieces rather than their final image. Aaron closely follows how his work lives, rots, and dies, utilizing the mediums of sculpture, photography, or one-off performances which follow his destruction of a love seat within the context of an improvised death metal show.

I\W: How does your practice address the banality and absurdity of the day-to-day?
AR: I like working with materials and circumstances that are very domestic and familiar. I think there is a lot of potential in those materials to exploit this sort of disgusting and perverse nature of just living. All of my projects have to do with time—the passing of time, decay, entropy, and futility. I like trying to make the impact of time visible and relatable, and to take it from the very large scale to the very small scale of the day-to-day. It seems that we are not that connected to the slow changes that happen to us or those around us. 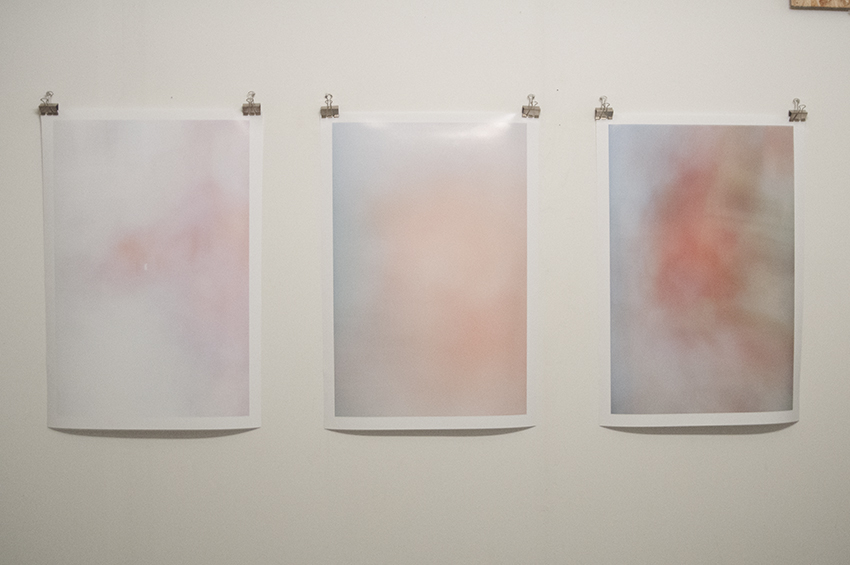 Are your experiments with decaying loaves of bread made in the same vein as these time lapse images?
The idea behind Untitled (Breadboxes) is that you don’t really know if they are still deteriorating or not, but they’re an attempt to preserve a moment. For those pieces, I’m thinking about how personal artifacts become really valuable to us and how we try to preserve our past so aggressively. Junk that has no value to anyone else, like bronzed baby shoes, or a childhood retainer, will exist for decades after we’re gone. It’s this tendency to unhealthily romanticize and fixate on the past that I find interesting. Especially when so many people seem to be equally haunted by their past. The bread is a super familiar image to me that signifies daily rituals like making school lunches. It’s really American, and comes from an idealized version of the US that is definitely an unhealthy fixation on the past that has been distorted and romanticized. A lot of the subject matter I’m interested in is thought of as wholesome, but is kind of a cesspool just below the surface. Wonderbread is bleached of everything that is good for you and sold as if it’s the greatest thing on Earth. I guess I like blurring those lines between what is and isn’t healthy. It’s all relative and easily confused. I think that’s really present in the breadboxes and in the porn images. The whole distorted fantasies, reconciling the dream with the reality, and a kind of inescapable decline as well. All things that I consider part of what we generally think of as Americana. 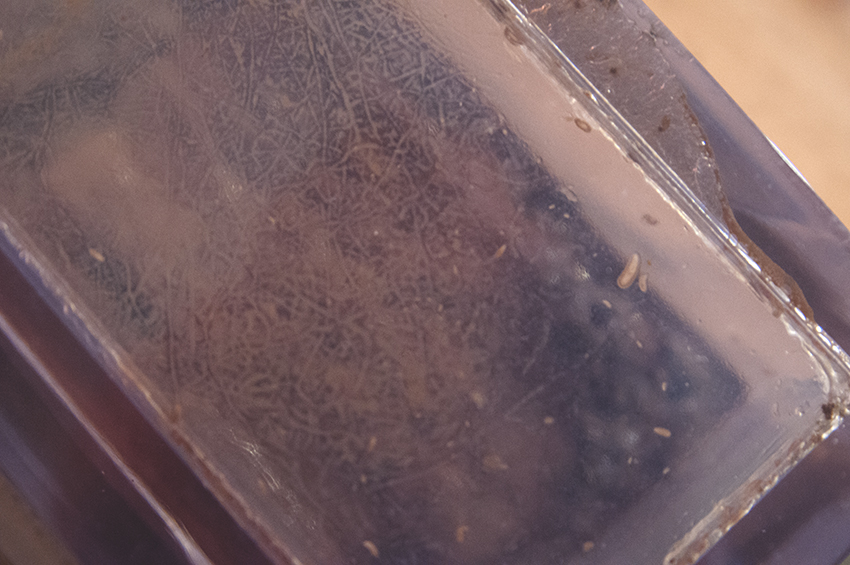 How do you fabricate the plexi boxes in which you seal each loaf of bread?
It’s essentially a plexiglass box encased in resin. A box in a box, so it can be its own ecosystem. If you imagine two rectangular boxes with their tops open, I fill the bigger one with a layer of resin at the bottom, and when it’s partially cured, put the loaf of bread down into it, and cover it with the smaller box on top. Once that seal is made, I pour resin in all around it and on top of it, filling up the bigger box. When it’s dry I take off the outside pieces of plexi so it’s just resin on the outside. Some of them have flaws where air sneaks in, but in most they are completely sealed off and create their own little environment. One of them cracked while it was drying and it deteriorated much faster. Now there are maggots growing inside. They all have their little quirks. It’s something that makes each one unique and stops them from appearing like some kind of slick minimalist statement. I’m interested in the flaws and shortcomings of humanity, so why should these be any different? I like that element of chance. 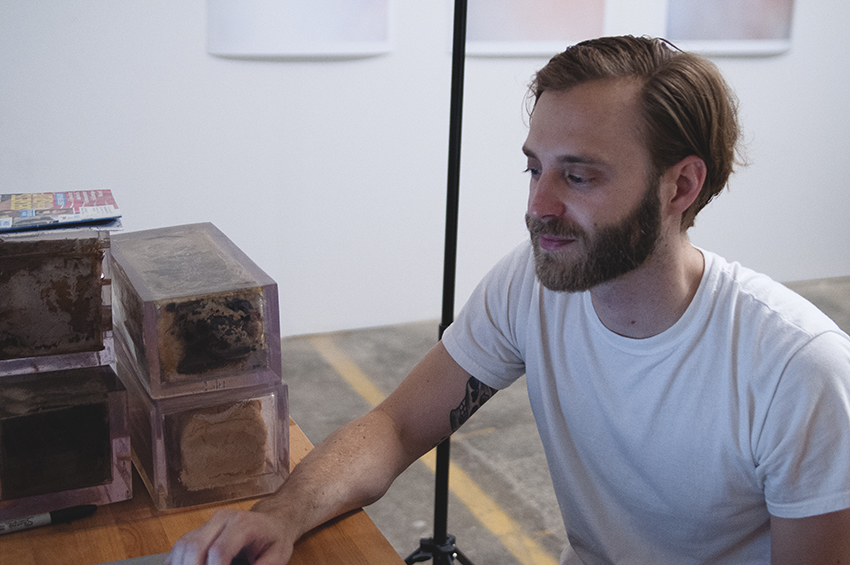 Can you explain the disco ball work in your studio?
I just wanted to make something joyful. I got the disco ball awhile ago for a completely unrelated project and knew I needed to do something with it. Now it is together with a sculpture I made out of bologna, and this slowly wilting orange that looks like a sun to me. It’s like a sculptural screenshot of life in the studio. The fact that the disco ball is reflective but also distorts, it’s a lot like the ethos that I am trying to convey in these pieces. I see it as sort of a rotating party globe. I just think it’s beautiful and fitting within these other objects. The sculpture is like my version of a mobile. It’s a model of the universe within my studio. 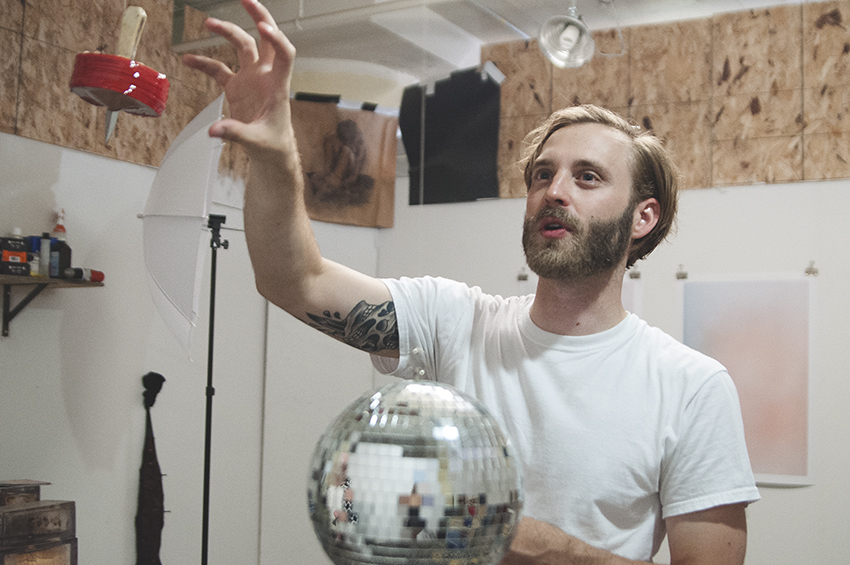 Do you feel as if you are more of a photographer or a sculptor? Or does everything come back to photography for you?
My background is really in video, but most of my work starts where I have some sort of a process that I want to play with and the end result might be a video of me doing that process, or the sculpture that is made as a result. Basically the document, whatever form that takes. I don’t necessarily gravitate towards one form or the other, but lately I have made a lot more photos and performances. Following my show at the Comfort Station, I wanted to mix up the way I work, and think image first instead of image last. It hit me when I was documenting the show, and the documentation wasn’t really doing it for me for whatever reason. I don’t think the audience is seeing what I want them to see sometimes, and it got me thinking about presentation more. I don’t know that I’m fully capable of creating work around the image first, strictly around the presentation, but I want to offset my thinking about that and see what the impact is. I want try to be a little more generous visually. I think that’s partly why I’ve been gravitating towards photography more lately. 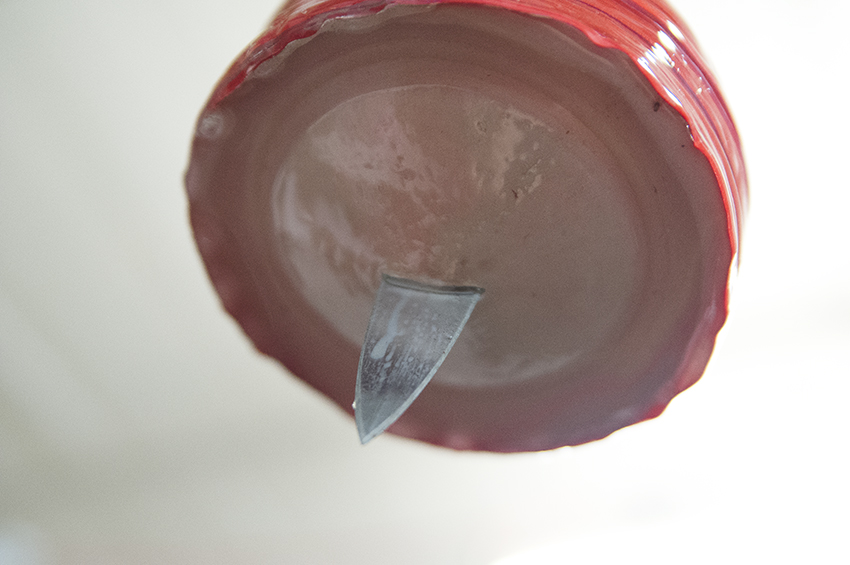 There’s a lot of uncertainty and problem solving in real time like any good relationship. I just love anything that has the potential to fall apart at any moment.

How does music and visual art intersect for you? I saw you destroy a couch last year during a heavy metal concert at Dock 6 Collective.
The time I spent playing in punk and hardcore heavily influenced my aesthetic interests, and I guess also the vulnerability and anxiety and aggressiveness and risk that I like to see in my practice and others’ practices. It’s less the music these days that intersects with art for me and more the ethos, ethics, and tactics. Underground music is where I first fell in love with critiquing culture and generally not giving a shit what other people think. There’s an amazing intersection of social responsibility and personal freedom in punk. It’s what brought me to places like Compton and New York and Japan, and out of my suburban bubble. Sleeping on the floors of strangers has a big effect on you when you’re 18, and people just take you into their home for no good reason. I think it really opened my eyes to what’s possible in terms of connecting with people.

That performance you saw is by far the most literal intersection I’ve ever made. Edra Soto and Dan Sullivan invited me to perform “Untitled (Warehouse Show)” at their annual Dock 6 Art & Design show last summer, which was the second iteration of a piece I had done a few months prior, “Untitled (House Show).” The format being that a group of people come together for one night to perform an improvised set, while I improvise with a series of household tools to dissect and dismantle a love seat. It’s a play on the DIY shows I grew up going to at people’s parents’ houses. I previously performed the piece with a different group of musicians, but for this one Dan and Edra got their friend Eorl Scholl to play drums and became my band instead! I told them that they could stop playing whenever they got sick of it or when the loveseat is halved. That’s the ultimate goal, to separate the two seats of the love seat. But I can honestly say that both times I did this performance there was a point where I 100% thought it wasn’t going to happen. Those things are well built! It’s a very visceral performance and it doesn’t take long at all to see that no one observing or performing knows what’s going to happen or how it will play out. There’s a lot of uncertainty and problem solving in real time like any good relationship. I just love anything that has the potential to fall apart at any moment. Everyone is making it up as they go along and it absolutely stops being fun at a point. 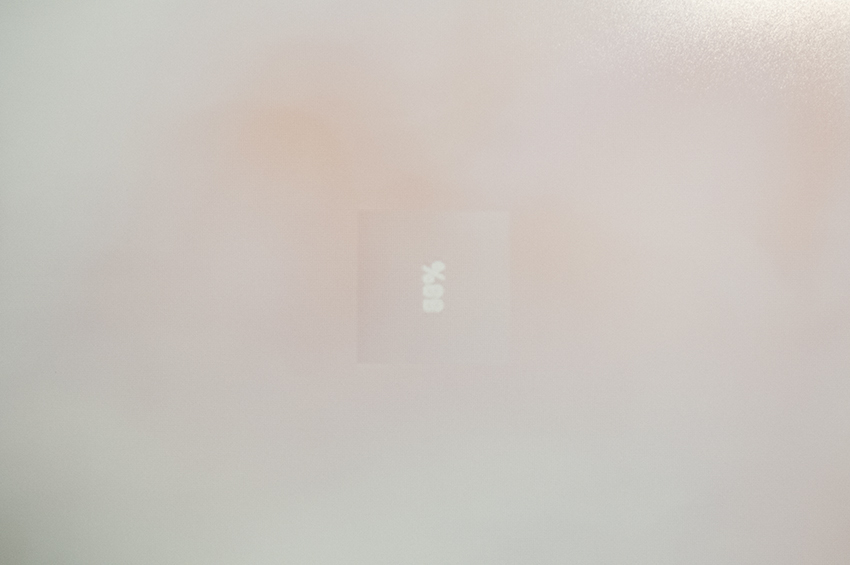 In what particular direction do your most recent projects seem to be going?
My recent projects have made a noticeable lean towards optimism. My work is still based in what I would loosely call existential nihilism, but that doesn’t seem to be what I or the world needs at the moment. So I’m working on a video where I’m kissing 21 Chicago artists through pieces of bread. Putting our germs on them to make a record of our relationship so I can let it grow and mutate for all of time. I’m going to isolate each one in resin like the bread boxes and present them all together for one last loaf.

I also recently started a thing I call Chicago Studio Visits, where I’m scheduling group studio visits with people in our little community and anyone can attend. We critique and chill and talk about the work, and hopefully get outside of our cliques a little bit. Like in school but better. Anyone that has been to a handful of openings knows that the last thing you talk about at an art opening is the art. I really want to get away from that and create opportunities for people to get to the heart of why we do this. I don’t know if this thing is a part of my practice or not, but it’s something I value.