Hailing from Columbus, Jennifer writes and directs films about places that are overlooked, the day-to-day scenes otherwise dismissed as filler. Injecting these stories with feminism, telekinesis, and multiple sub-plots, she creates worlds in which teen girls are often the stars, underdogs reigning as leads.

I\W: What inspires the relatively unremarkable landscapes and environments present in your films?
JR: When I left Ohio to come to grad school at SAIC, there was a trail of scorched earth behind me. Once I got here I realized that I had no business being in the city and certainly no business making work that was about the city. I have been here for 20 years and I have still not made a film that has a shot of the skyline, train, etc. We have shot a bunch of stuff in and around Chicago, but it is shots of interiors, or framed so we eliminate any traces of it being urban or interesting. When you grow up in a place that is unremarkable and you yourself think you are unremarkable, you create your own remarkableness and maybe it is in some sort of internal resistance. You either become super unremarkable or get super weird. It’s not even like I try to inject the unremarkable into the films, it is just simply what my aesthetic is—this ham-fistedness, this trudging through your day and making a bunch of little mistakes. 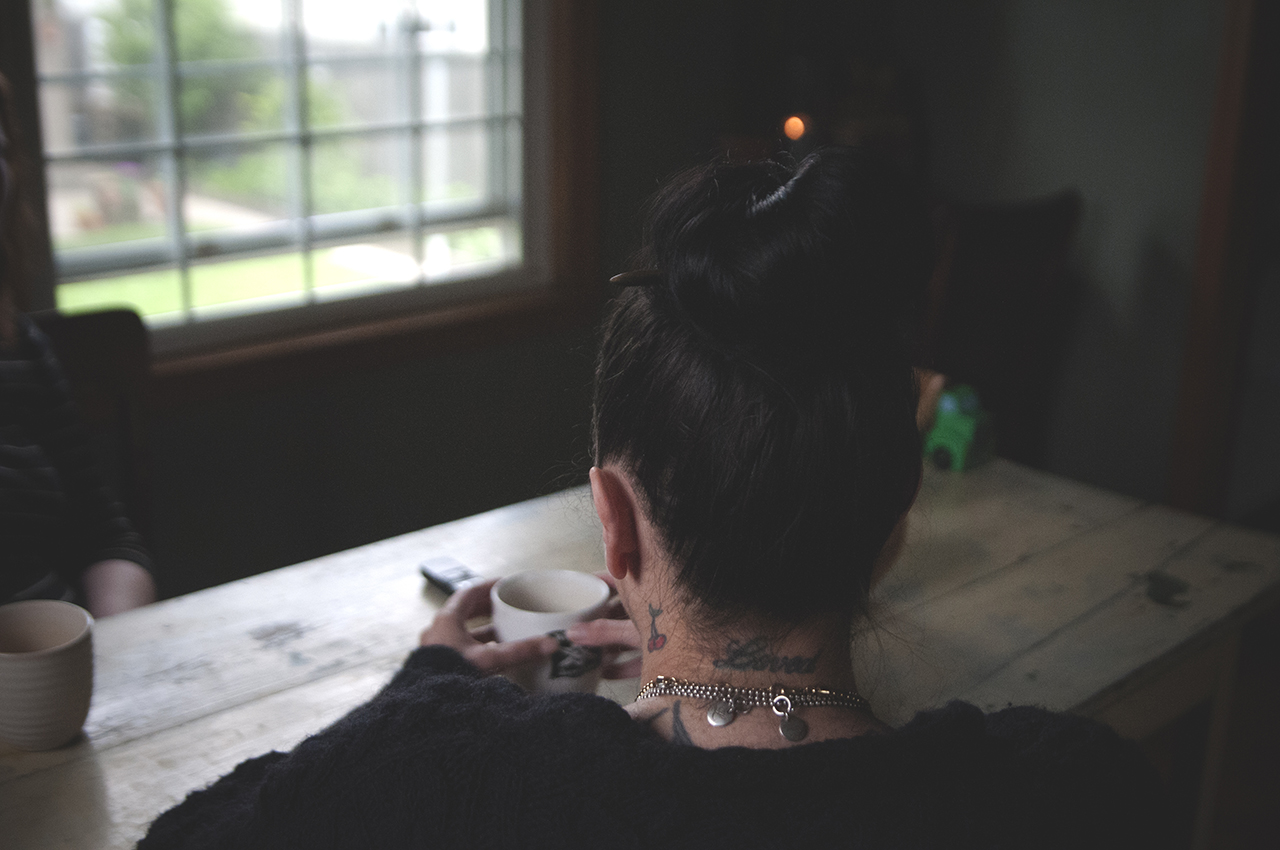 Is this balanced by your use of small elements of magical realism, tiny sparks of bizarre film editing?
For that reason I think that’s why I, in some of the recent narratives, place these injections of magical things that happen like floaty things or telekinesis or these magical moments where the Midwest and Ohio are utopia. There is this parallel world where you realize Ohio is shaped like a heart and there can’t be anything wrong with that. That’s where that magic comes from because we have to have a break, not just in our lives, but in that kind of cinematic experience. It can’t all be terrible. My films often present a kind of dystopia—everyone is out of sync, making one small mistake after another. The magical bits of editing represent hope for my characters and the broken little worlds they live in. The magical bits are the utopia and synchronicity, the possibility of transcendence.

What sources of inspiration inspire your films?
I like the potential for people who shouldn’t be having a meltdown to first of all have a meltdown, and then be having a meltdown at the worst possible time. In real life it is not that uncommon, but it is really extraordinary. When you see a stranger on the bus, train, or in a shop that is sobbing—it is disturbing. I feel like that deep emotionality that person is experiencing is vibrating out of them. It is a moment where humans become human. Even though I love a sad ending, I have tried to give more open endings within my films, try to give some hope. I don’t know if that is happening as I get older or if something about motherhood has softened me. Inspiration comes sometimes in a line of dialogue I imagine, or sometimes it something more visual that strikes me as really funny. For instance I quoted an exchange between my ex-husband and our oldest son for the script of “And I Will Rise If Only to Hold You Down.” The wife seems deep in thought and her husband asks what she is thinking. After a few moments, she simply says, “Star Wars.” It’s a moment that usually gets a chuckle from an audience. Someone recently told me a story about witnessing a teen girl get so mad during therapy that she pulled out her tampon and flung it at her own mother. I am going to use that eventually for sure. 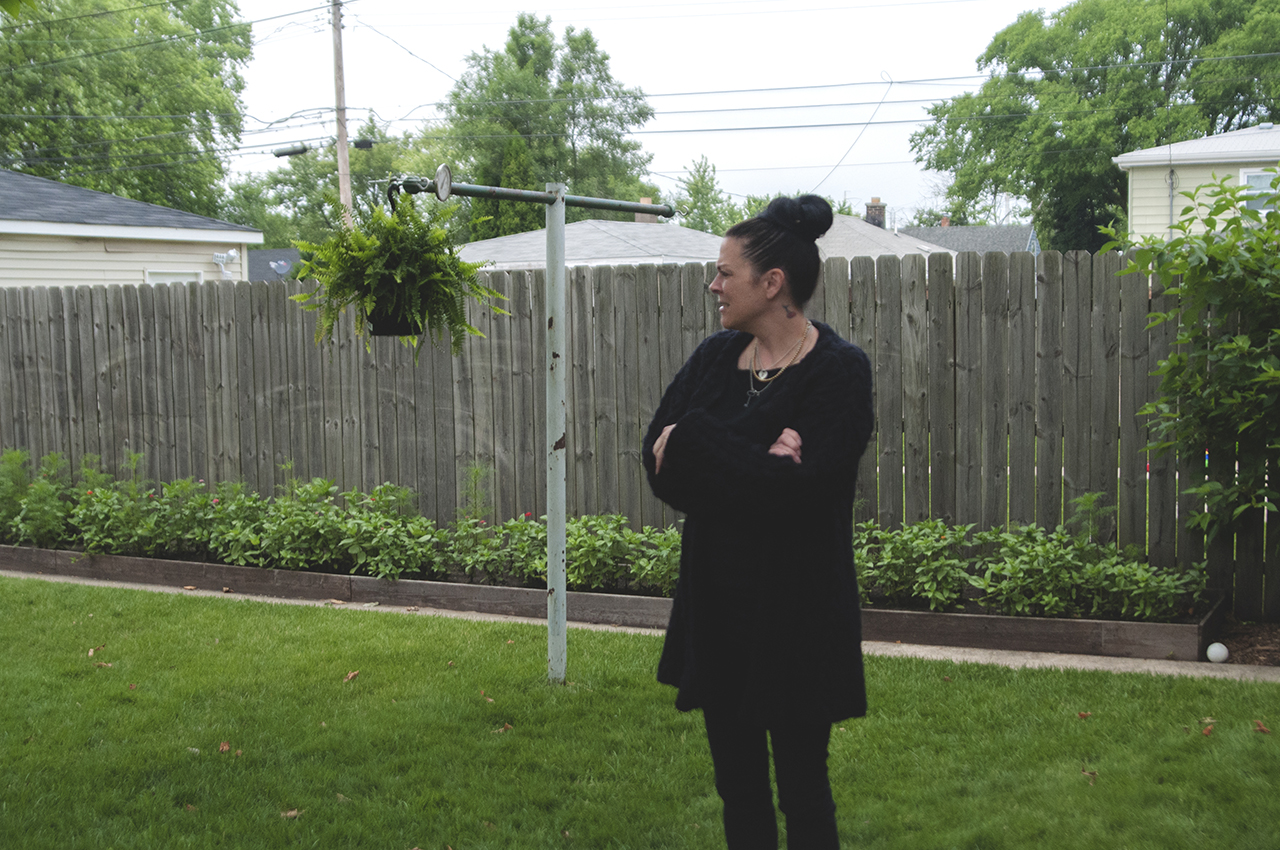 How did your graduate thesis “White Trash Girl” influence the work you are making now?
“White Trash Girl” chronicled the adventures of a female superhero. I didn’t grow up in a trailer or a house with dirt floors in Ohio, but I definitely had a sense when I came to SAIC that I didn’t come with the intellectual scholarly chops that a lot of the other students did or had. I certainly wasn’t making the type of academic film and video work that was coming out of that program. I was also making really goofy campy videos that relied on humor and these really unruly female protagonists. It occurred to me that I could make that unruliness a powerful trait. Crazy can be powerful, but both men and women use that word as dismissive. I wanted to take a character for whom maybe herself doesn’t identify as white trash, but maybe the dominant culture would call her white trash and that is her super power. I really made that as a way to upset my graduate advisors, but they thought it was pretty funny. In a way I am still making the exact same film and totally invested in the unruly female. It is my obsession. I might try to cover some other subject later down the road, but I like an underdog. I am a total sucker for those stories cinematically. I think presenting a female protagonist is feminist as well. It irritates me that the most popular feature film female director in the United States is Kathryn Bigelow who has made action films that are all men’s stories. It has always been important to me to identify as a female director. I try not to miss an opportunity to inject a little feminism into the stories even if it is someone having a moment of conversation where they make a reference to Kiki Smith. They are bringing up a kind of women’s history that feels really important to me. 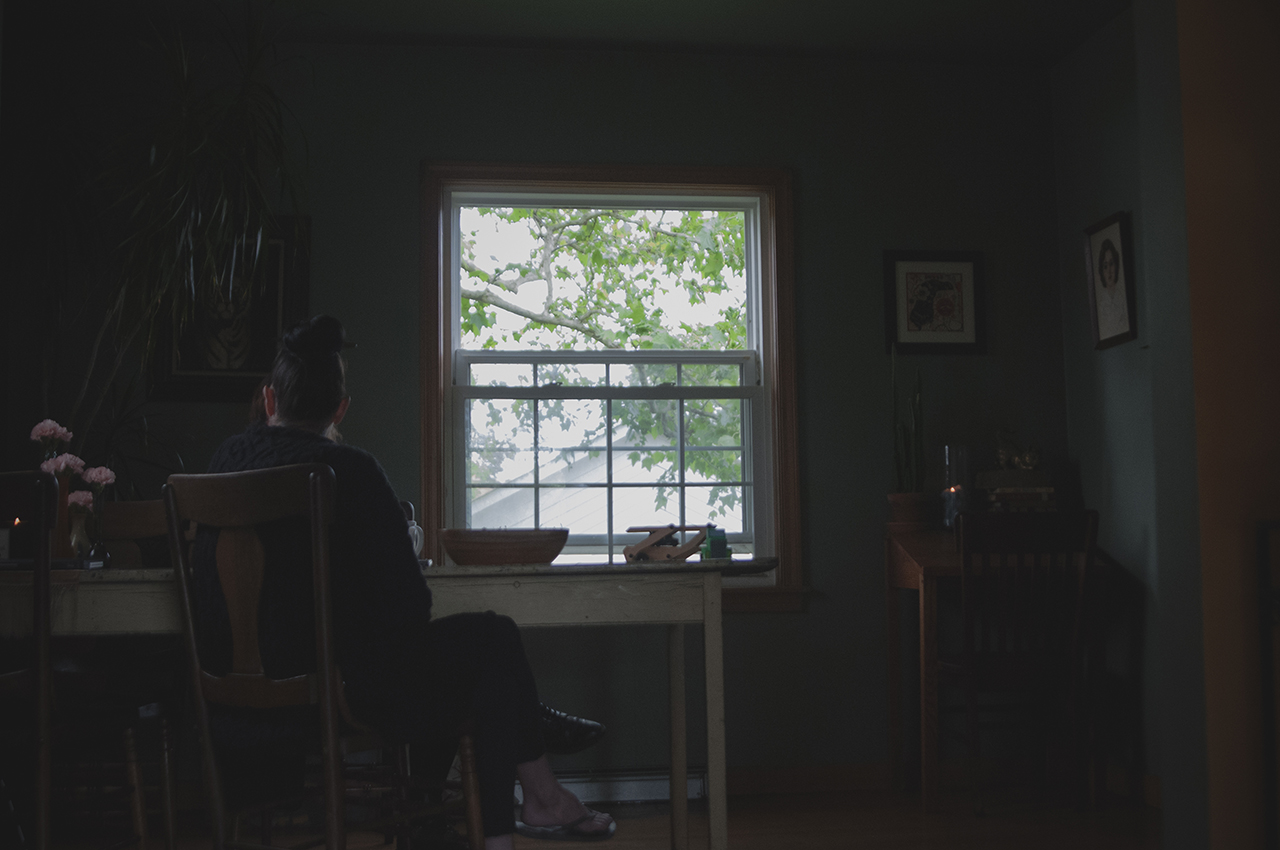 In what ways do you like to art direct a film in order to align more closely with your artistic vision, imbue a bit more feminism into the sub-plot?
In “A Million Miles Away” there is a girl that is reading Backlash. In real life is maybe not a realistic book for a 14-year-old to be reading, which is already sort of a vintage book, but not a vintage sort of idea in terms of feminism. You can miss that visual reference, but if not it’s not like you have missed the bulk of the story. I don’t want to miss that opportunity to inject a sub-sub-plot through art direction or props and wardrobe. Maybe that is part of teaching moving image in an art school where I am surrounded by people for whom language is not available or verbal language isn’t there in their practice. Teaching in an art school and being surrounded by more artists than filmmakers gives me more freedom to inject artful moves into my filmmaking. I am committed to cinema as both entertainment and art form.

My films often present a kind of dystopia—everyone is out of sync, making one small mistake after another. The magical bits of editing represent hope for my characters and the broken little worlds they live in. The magical bits are the utopia and synchronicity, the possibility of transcendence.

Do you intend to make a clear distinction that you are a visual artist as well as filmmaker?
I think recently, within the last six months, I have removed the visual artist aspect from my bio. I think it had been in there because I had had some recent stuff in the gallery world and felt it was necessary. I don’t know if I feel that way anymore, or as a part of my identity as a cultural contributor. I feel that I identify much more as a filmmaker that uses visual arts references. In a way right now I feel a little resistant to art and identifying myself as an artist and I think that is coming from some very post grad MFA life crisis or something like that. It has a little bit to do with teaching in an art school. I realized at some point that I am not afraid of wanting to entertain people, to have some sort of legibility or accessibility that belongs much more to popular film making. However, I think it is impossible for me to make a totally conventional film. I think I have made one, and then I still get a critic explaining how weird it was. I have that want to be slightly more populist in a way and have people “get it,” where sometimes I feel that it is the opposite for some artists who want that lack of accessibility or entertainment. 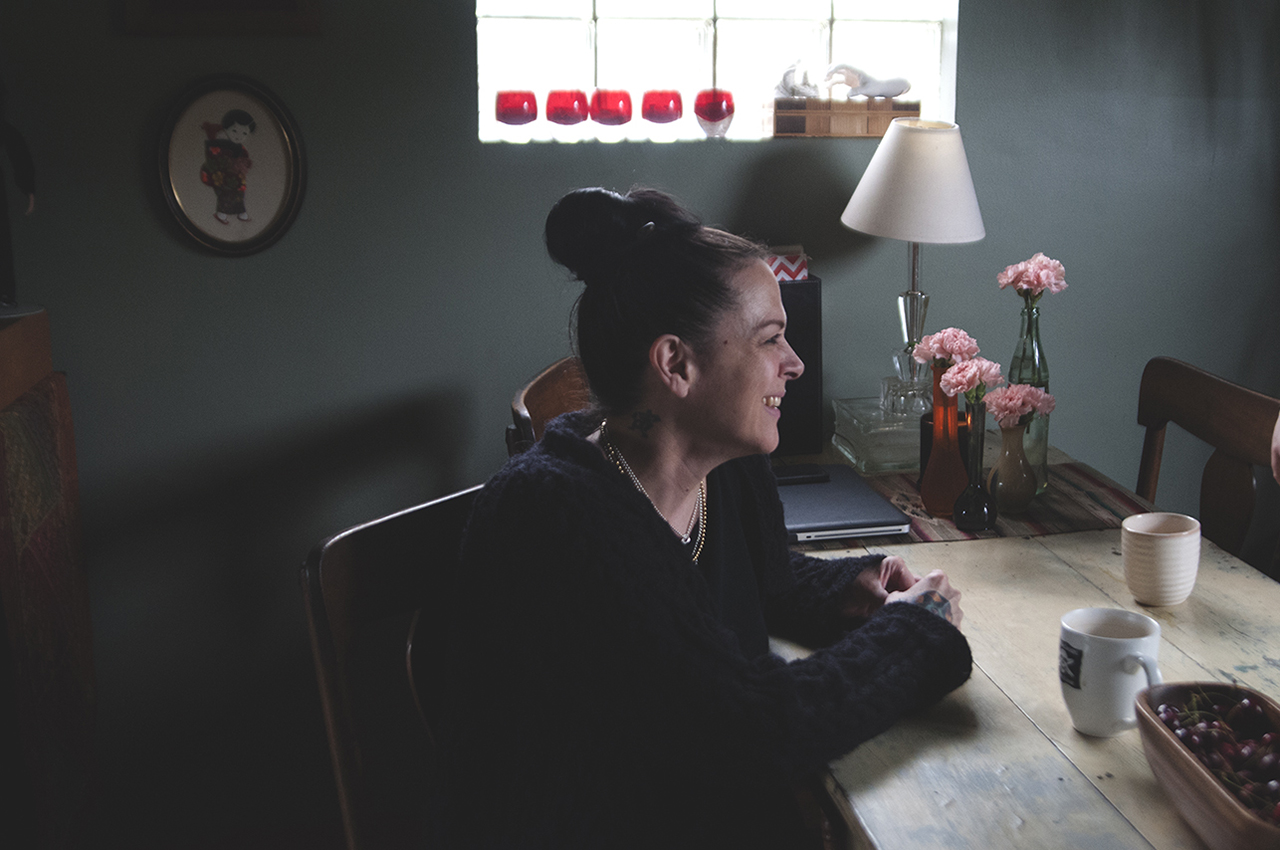 Can you talk about your upcoming feature film?
The feature length is called “As With Knives and Skin.” I received a Creative Capital grant to make the film but won’t start shooting till next summer. I have been writing it for awhile, but I am not the kind of filmmaker who just talks about their script for 10 years. Feature film or even short film funding in the states doesn’t really exist so why wait? I like to just keep working, so I made these two shorts that were adapted from scenes from the full length. If you watched those two films you would not get any gist of the feature length. 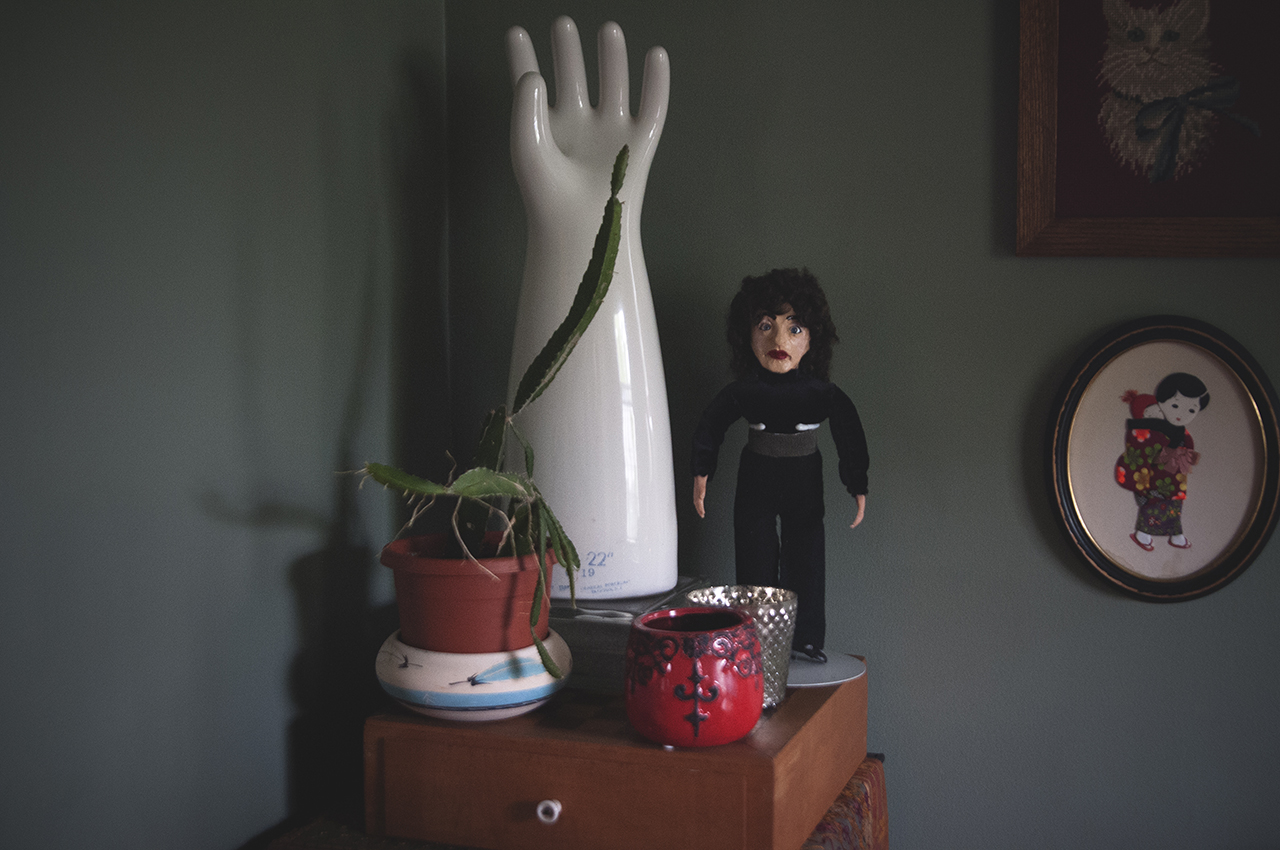 How do you approach feminism outside of your films?
My films approach social justice in a different way than Tracers which clearly has much more of a social justice agenda outside of artmaking and the popularity of that situation without having to define who we are or what one thing we consistently do. Feminism is really personal. Some people need really specific and academic panel conversations about feminism and LGBTQ, other people want radical crafting events, other people want film screenings and others just want the pencils. Tracers started after really just being exasperated with all of the gender inequality bullshit in art, filmmaking, and just general social structure, and noticing a lack of embracing the word feminist. It kind of caught on and that feels really good, but it also feels open and fun and personal. You can be the radical separatist or be the Say Yes to the Dress bride who is feminism light. There is a little bit of something for everybody.

I have always identified as a feminist and I have always identified my films as feminist. It’s an agenda that I unapologetically promote. My characters are primarily female—robust and complex. I am committed to presenting the female experience as transgressive, but accurate. That is not to say that I will never make a film about males and in fact there is a story in my head about boyhood that will eventually become a film, but it will be a feminist film of course and not called “Boyhood.” 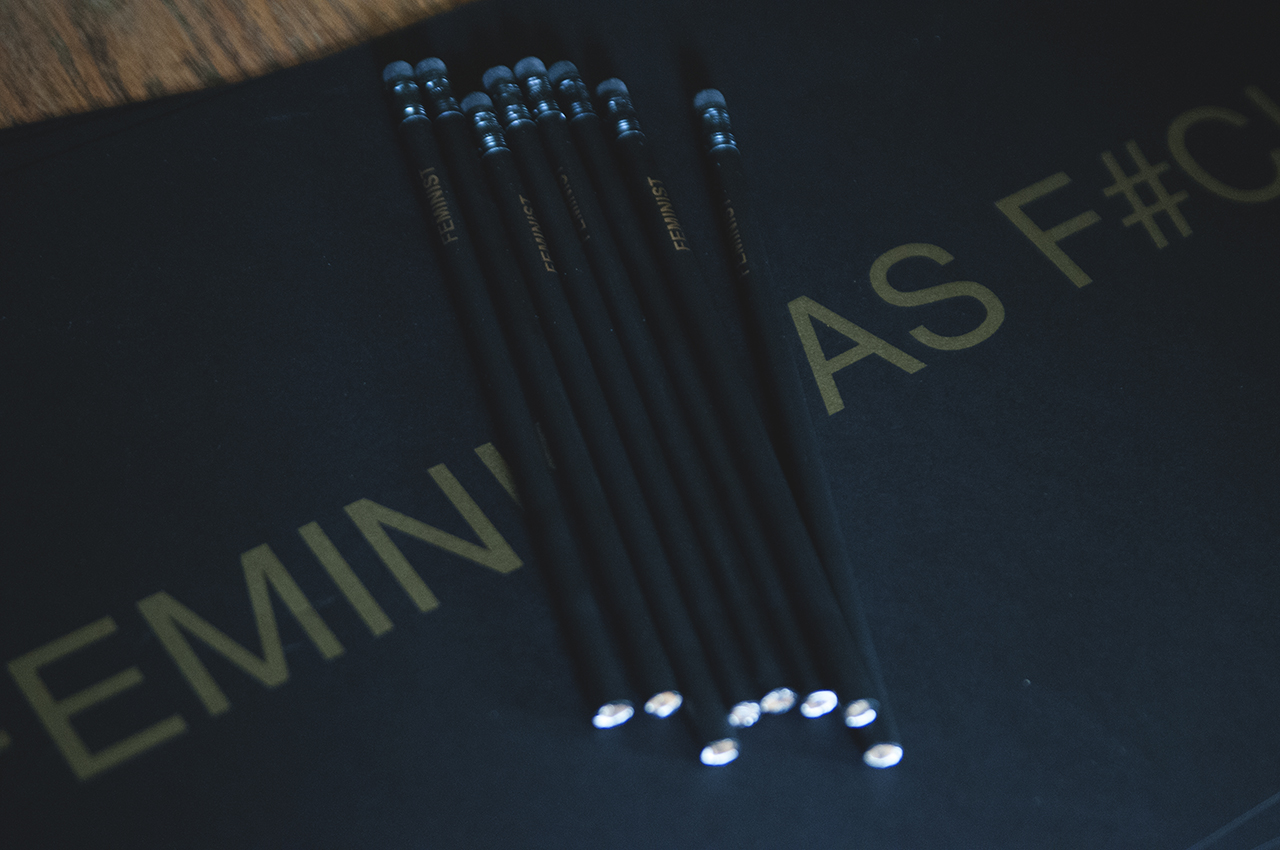