Previously collaborating with anonymous makers of discarded art, Margot has recently begun to work alone with her gestures, allowing traces of what she learned while painting with others to continue to influence her own vocabulary. These larger works, which focus on female images, emotionally link broad paint strokes with manic scribbles. The disparate gestures create a dichotomy within each subject’s face, conjuring an energetic aura that extends beyond the canvas’s edge.

What did you learn from working collaboratively for so long? It seems like the paintings still hold many aspects of those works.
It’s true. I think you said it right. There were aspects of another that I am still able to draw up in some sort of visual vocabulary. 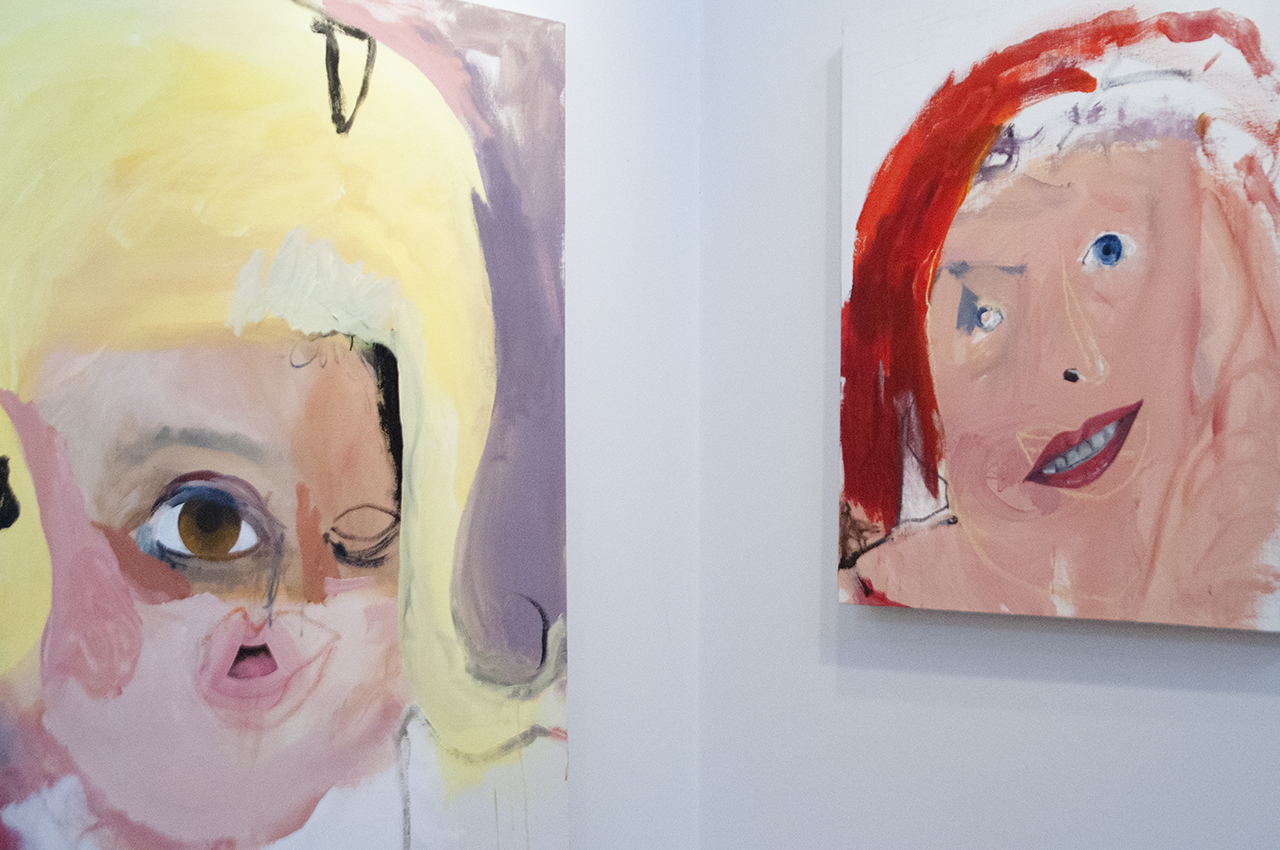 I love when faces peek through behind others. Do you feel as if you are trapping those faces, or liberating them so they can reach the audience?
I don’t think about that. I am working right now from the body and not the mind. What you may be relating to is the conceptual aspect of the earlier work, where what I am doing now is much more freeing for me. Not so much about concept, but about something else. I appreciate that you like the other, I did too. I like the idea that I could work with the other, and now the other is me. It is internal. 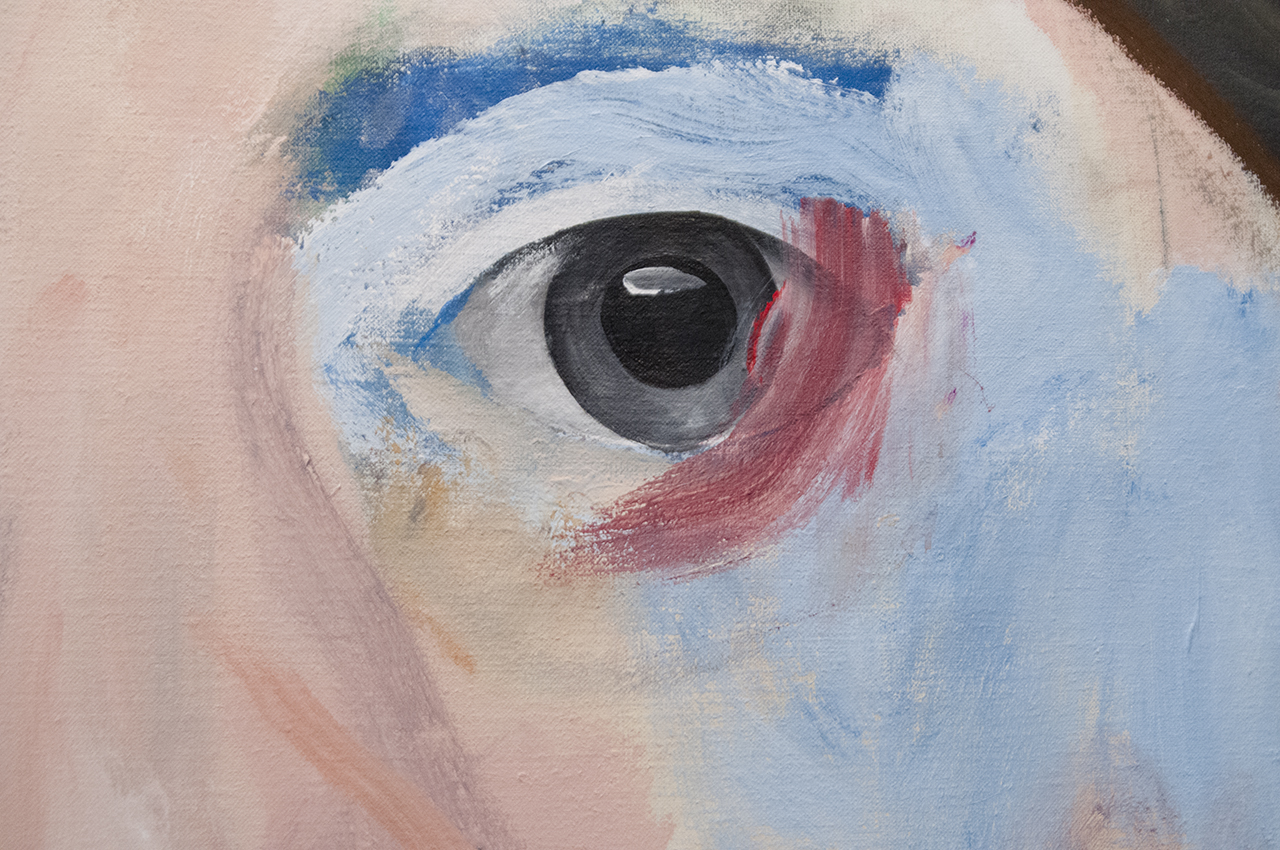 What is your process when you are first starting off on a canvas?
Body. It’s gesture—just a gesture. Raw and suddenly within a minute I see a face and it is a response like that. I have always seen faces. I look at the tile on a floor and I see faces. It is not hard for me to immediately respond. It’s all gesture and a couple of lines. For me it is just body. It is something known—openness to what can happen below the head and then what the head can do. 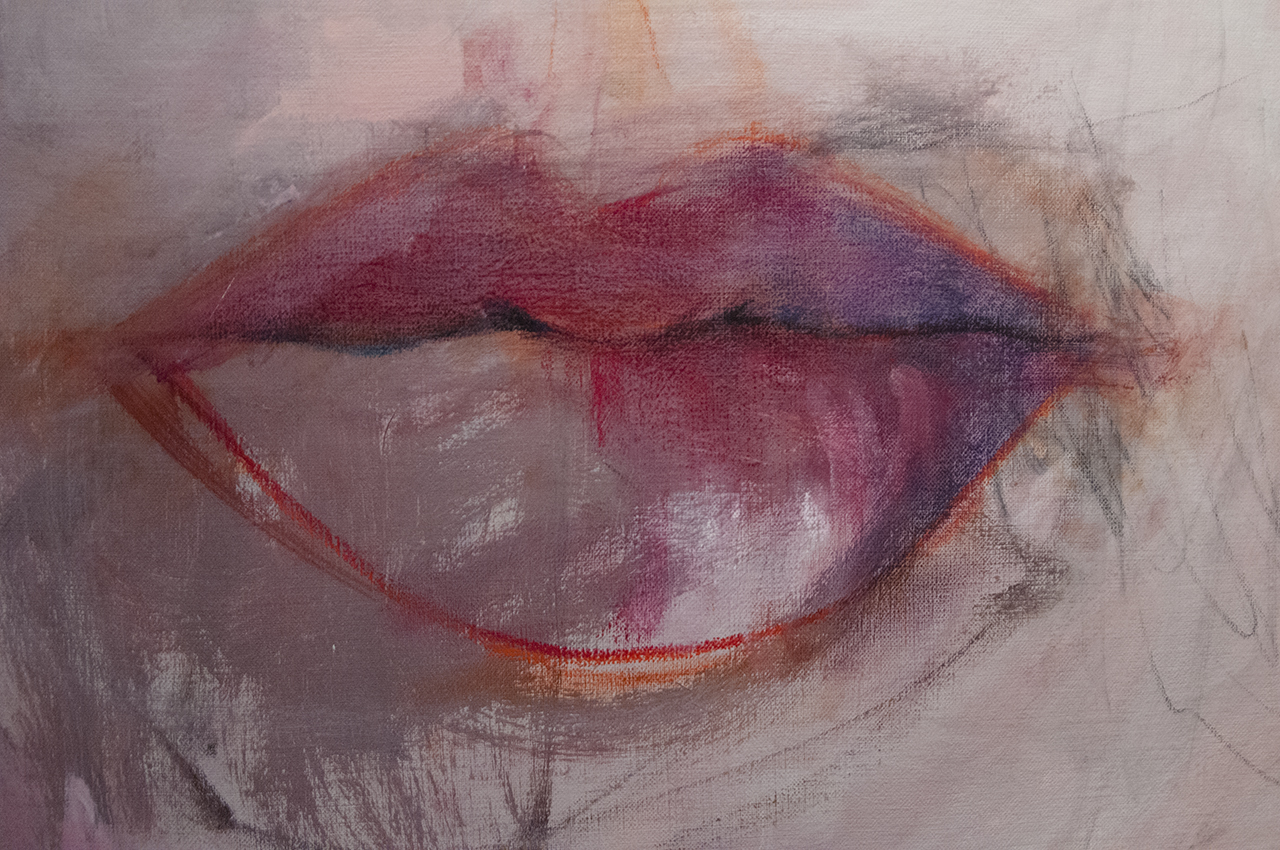 Why only women?
Why not? I am a woman. Who would I know?

Do you title your paintings as you go, or after?
Sometimes I know right away who she is, and sometimes it is maybe after the fact and very deliberate. Occasionally I’ll turn to John (Corbett) and he helps me title them.

Each mark and facial expression is made with a lot of confidence, while the women as a whole might seems a bit more self-conscious. Why do you think this unfolds this way in your work?
I love that, I really do. I think there is a dichotomy in the work and what you have spoken about is that dichotomy that may be internal for me. 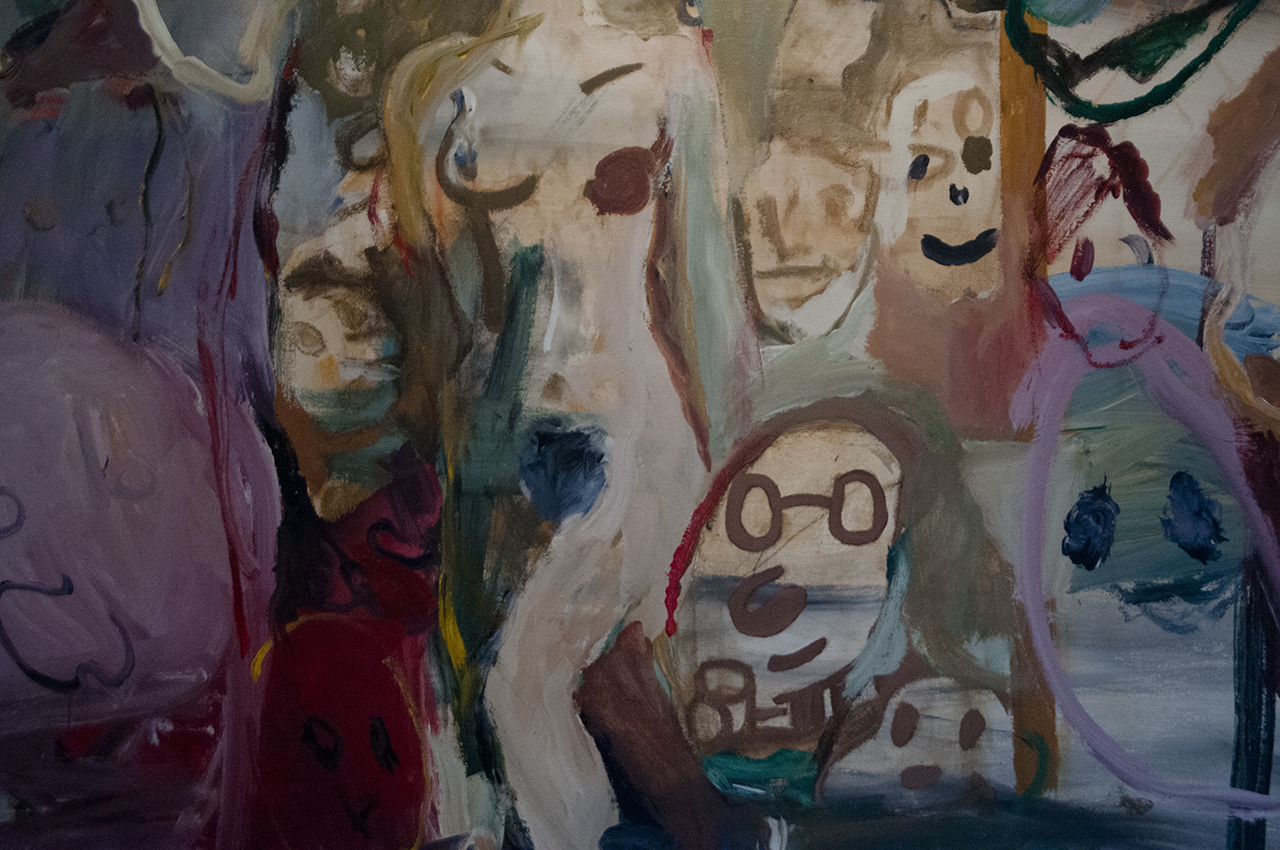 Do you ever get self-conscious when displaying your works? Nervous that others might see these inner parts of yourself?
Sure, sure. I think that they have been thought of as psychological portraits, and I don’t know if everybody wants that kind of thing revealed. I do worry about that aspect, but I appreciate very much that people also need to see it and appreciate it. There are times when I am surprised with what comes out. It can be shocking.

I like the idea that I could work with the other, and now the other is me. It is internal.

Who are some of your artistic inspirations?
I have deeply appreciated artists like Bruce Nauman, Arnulf Rainer, outsider art or Art Brut, the art of the insane in Lausanne, Switzerland, and abandoned and discarded art that I have found in flea markets and resale shops. The later of which I have found kindred souls and gratefulness. I also took a performance class at Ox-Bow with Marcia Tucker who was a mentor that was pivotal and helped me find a studio in NY which I enjoyed off an on for three years. 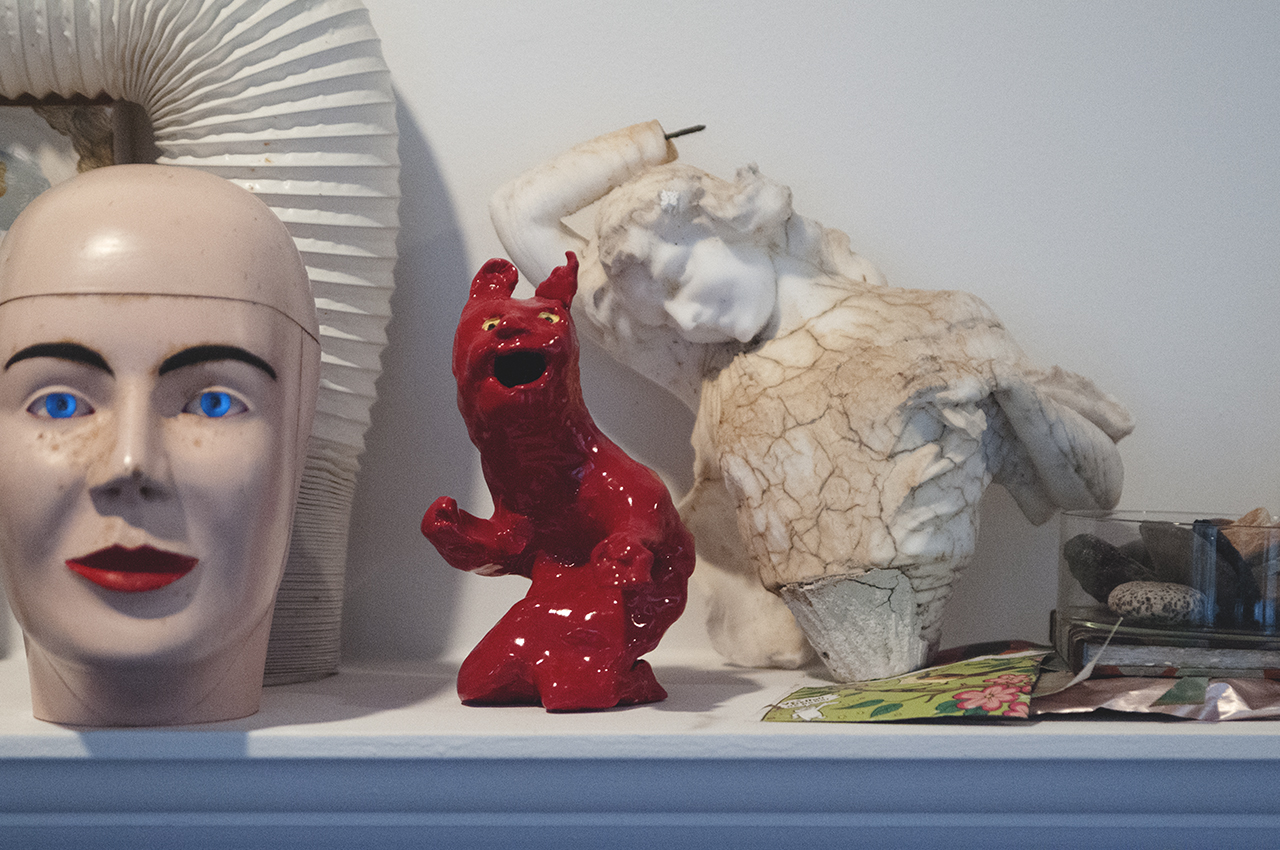 How did you continue your art practice after leaving SAIC?
Kwok Wai Lau, who came in from China to be both a student and a teacher at SAIC began teaching me at an art center near me. At this time I was a young married mother wanting to keep on with my practice of painting. He was enormously supportive, including me in more private painting classes at his home/ garage with five other like-minded women. When he left Chicago I began a journey alone and very differently. I began picking up the camera. 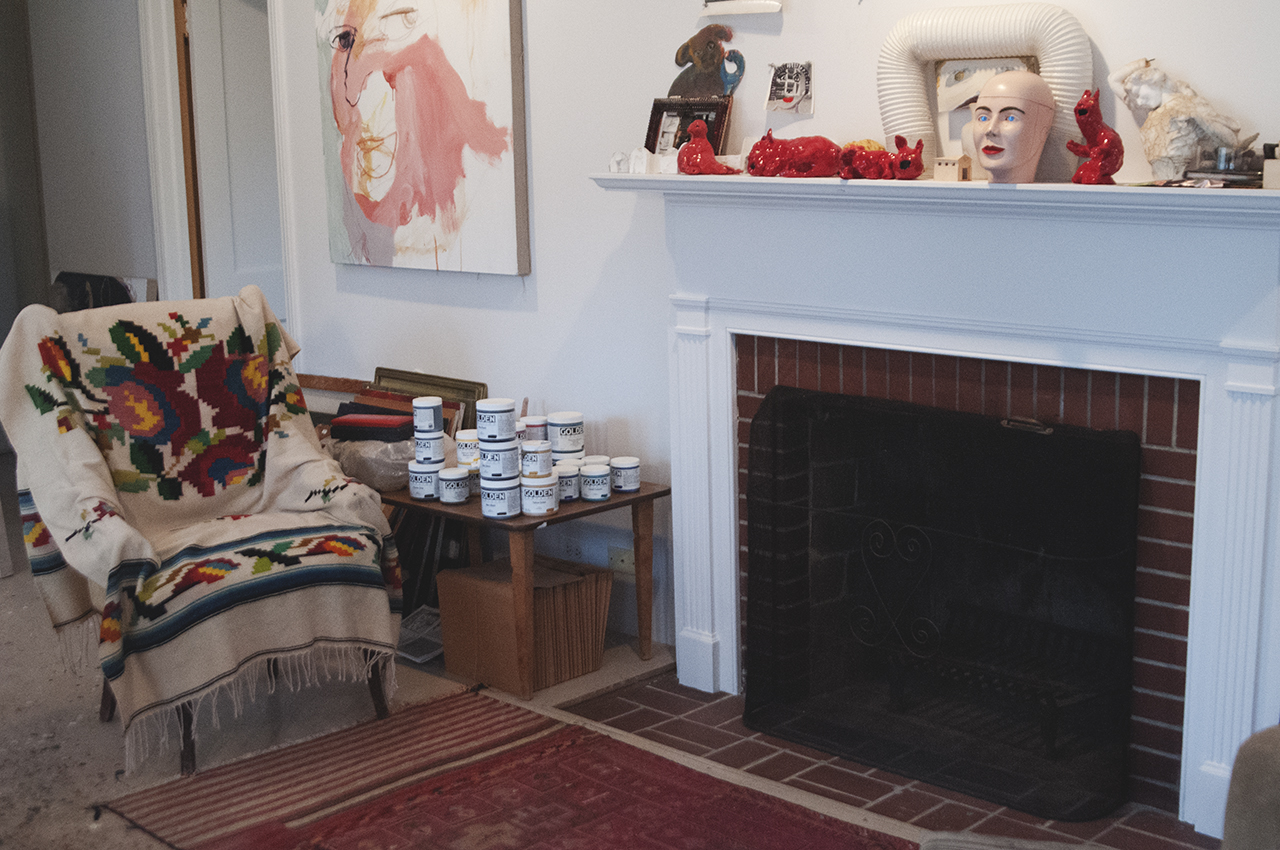 Has painting always been the constant in your practice?
I have done a lot of things, but my love is paint. I have done printmaking, I’ve done sculpture, I’ve tried watercolor, oil painting. But paint is the focus for everything. I also made these bricks that were both minimal and maximal. They had an image of a very big landscape that I took on my camera and placed on the brick. The brick could have been a part of that landscape featured in the photograph. Now I can look back and say that I can see where I was juxtaposing different elements together, and that was the real need. Now actually these works don’t seem so startling to me.

How long do each of your paintings take you?
80 years.