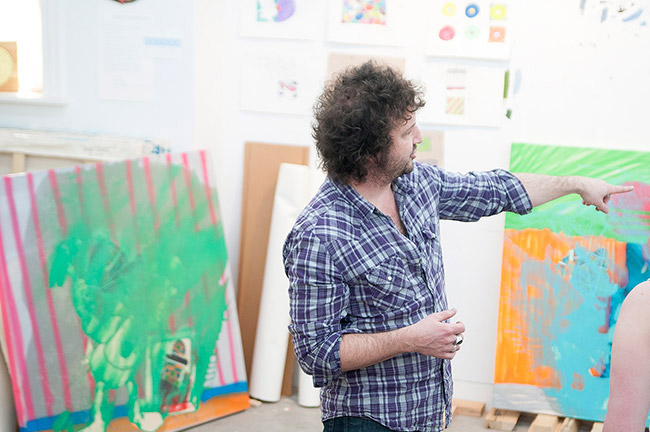 I\W: How do your paintings address American fear and paranoia?
AS: When I am making a painting and am in a state of being anxious or scared or alienated or nervous about the subject matter that I am using, I hope those nerve endings are present in the work. I think a way to open up the viewer’s retinal floodgates to accept that stuff is to have a kind of seduction and betrayal idea. There is the visual data that draws you in or seduces you retinally, and then once you are brought in, what I serve up to you with the other hand is something that I feel to be odious or not very savory. Sometimes it is very subtle, and sometimes it is very overt. I am not afraid to use American visual cliches, but then at the same time I warp and twist them.

What kind of physicality did you put into your body of work from 2001-2010?
That work is opaque and the surface is monolithic. It is entirely poured with no brushwork. I wanted the paintings to feel almost object-like and to have a sense of illusion. To do these, I would work with digital collages for weeks and weeks and weeks, and then I would come into the studio and draw the collages out and paint for about 15 hours. These works have to happen in one shot to have the whole surface be uniform. There was never any kind of coming back to it. The works were very production-oriented and executional. I would come in and spend months researching the image, and all that trial and error would happen in the digital realm. Then I would make these highly analog, very viscous works. They were from these two very different places, and I thought they worked very well. Not only did it make for funky paintings, it put pressure on paintings. The information coming to the painting is coming from a completely different texture, a digital texture. When it comes here, when the genesis of the painting occurs, it is absolutely liquid hedonism. It is no longer digital. It becomes all about pouring and spilling. I like those two very disparate things. 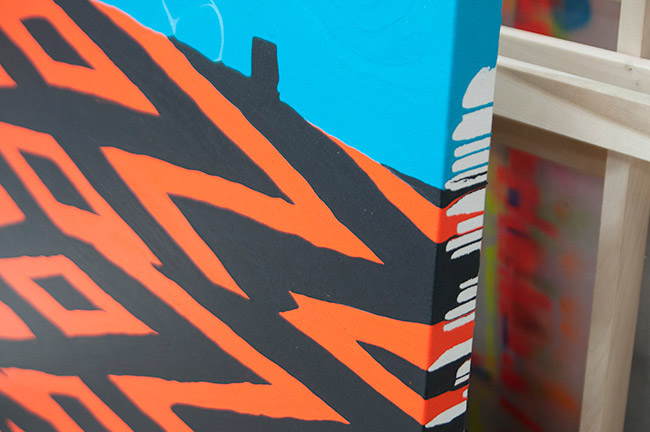 In what ways do you hope your audience is physically drawn to your work?
My heroes are Lynda Benglis, Paul McCarthy, Richard Jackson and Christopher Wool. Stuff is really intense in their work. These are the people where the thing is physical, and it is undeniable. As a teacher I am constantly having a discussion with my students about the impulse to make all pantings the visual indexes to paintings they have seen on blogs. The reality of the stuff is that it is as real as me standing in front of you. My body and your body is unescapable. It has to throb like that. I want that to happen. It brings you back to the stuff. You have to bring yourself to it rather than a constant window shopping for visual images. We never have to go anywhere, we can just sit around and compare. I still am a big proponent of how these things can be, how art can access your body and drag your body to the experience before your critical mind. All the music and art and film that I love really comes at you. You are having seismic quakes before you can wrap you brain around it, and then it is extremely pleasurable when it gets to your brain. You can be cerebral about it, but at the same time you feel like you got a sunburn.

When I am making a painting and am in a state of being anxious or scared or alienated or nervous about the subject matter that I am using, I hope those nerve endings are present in the work. 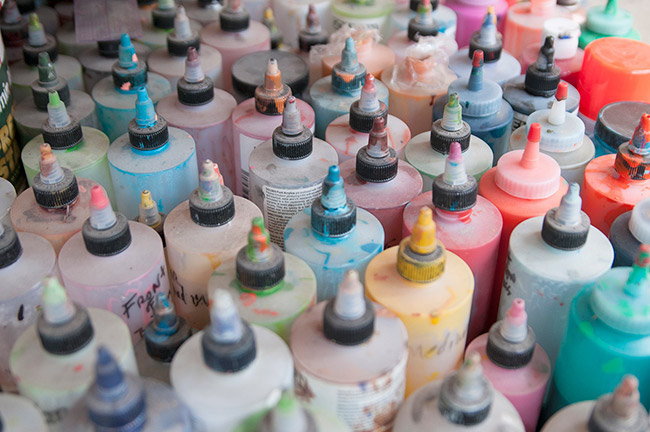 What was one show that really affected your evolution as an artist?
Helter Skelter. That show was a big deal for me. Paul Schimmel put it together in ’92 and was maybe the first time that Paul McCarthy had his outing. That show made me a believer that one show could change your entire outlook. This idea that a show in Los Angeles, the kind of sunshine place that creates the visual data and thematizes who we think we are and projects it to the world, could have a show that was about absolute darkness and depravity was amazing. That to me was the knowledge that there are things that exist underneath. 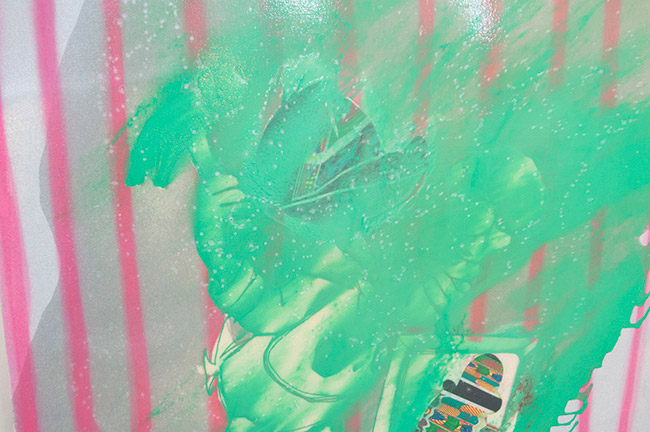 How did growing up in that sunshine land in the depth of media culture affect you as an artist?
It teaches you about seduction and hooks because that place is entirely about that. I grew up in the Santa Monica/Venice area. When you breathe it, it is like growing up anywhere, but then when you start to make art it requires you to be a bit reflexive. Part of art is analyzing yourself. In a way it made me really unafraid to take any visual culture and put it in the work. I am not afraid of excess or the hedonistic impulse. I am not afraid of using hyper banal imagery and pushing it in your face. I am not afraid of being crass. Those things do not exist there. Coming to Chicago and living here the last 14 years—when you move to a different place the start of your formative years starts to compress, the other things strip away. The sensations that were etched into you become even brighter. If I had never moved from there it would be interesting to see if my work would look like it does now. 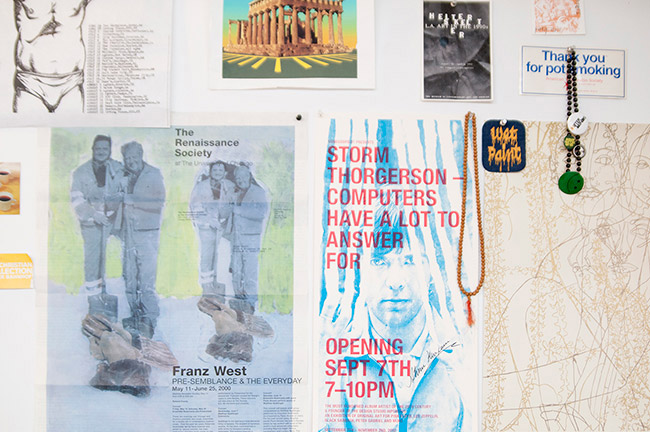 What is the most interesting way your pieces have been critiqued?
In Germany this cheeky reviewer said that my pantings looked like “Paint-by-Numbers on steroids” as a kind of very German, backhanded compliment. I think critique is fascinating. I don’t think you get a bad one. I think you just get different ideas thrown at what you are doing. If you are just too unnaturally married to your ideas, you might feel violated. The gallerist didn’t think it was a good review, but I knew it was all good. When I thought about Paint-by-Numbers, I thought how perfect it was—this uniquely American form of painting. It is the democratization of art, because art has never been about democratization. It’s always been about hierarchies of one sort or another. This Americanness that I keep coming back to is not about Nationalism, it’s about the equally hypnotic and betraying force of being an American. 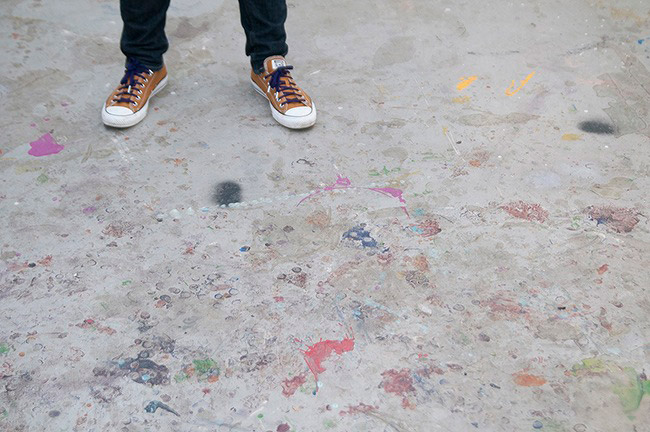