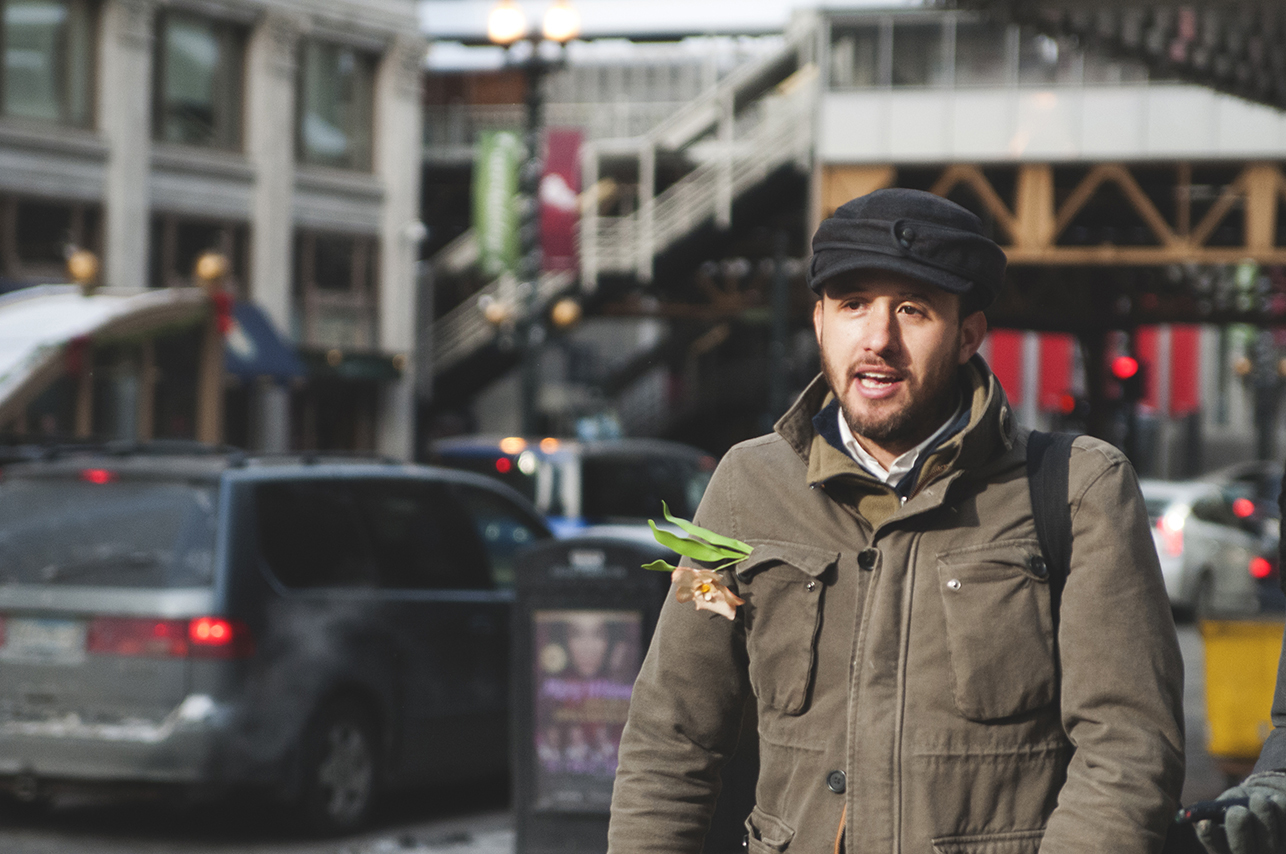 Alberto uses found objects to construct sculptures—creating meaning between objects otherwise unnoticed. His studio, untied to the physical, exists within home, office, and while in transit.

I\W: What is one thing you do every single day?
AA: One thing I do almost daily is drink coffee. I also walk to my office from 16th and State. These walks are always inspiring to me. I am doing something regulated. I don’t exercise, so this is my exercise. Because I am doing this regulated motion, it is the time I have the most ideas.

Drawing enables endless possibilities, yet your drawings tend to work with what is already on the page. Why?
It’s sort of like a journey, anybody who would go on my daily walk is not going to find any pleasure or joy in it because they always think about how far away their destination is. Generally speaking that’s how people are. They don’t like putting themselves through this kind of pain because they don’t see anything interesting along the way, or they don’t see it as a possibility to bump into somebody or come up with a new idea. I do this walk every single day, even though this is my least favorite street. It’s more about the idea of how many possibilities there are in the framework of the paper.

What was the first “Domestic Monument” you ever constructed?
It was in my other house. It was an end table with stacking blocks going through it, and it had something arbitrary on top. I made it because I went into my kids’ bedroom one day and I saw the blocks laying there and I saw the end table, and I made the connection in my head. I’m very interested in this idea of things on top of things. Having kids, there are always toys and animals around so I like playing with those. 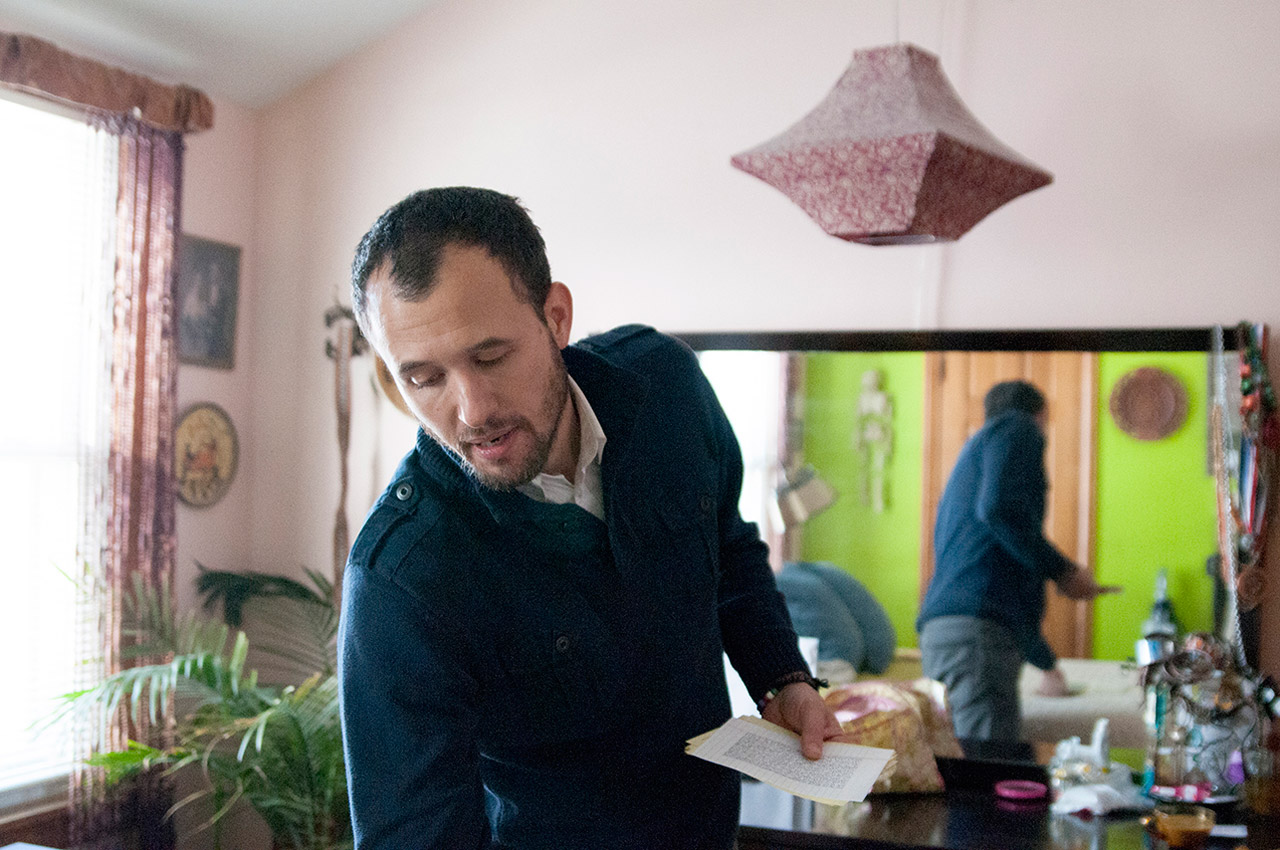 How do you approach your Domestic Monuments when making them in others’ homes?
I go into people’s homes and I will ask them to give me a tour of their house. They will set me free, and I will make one of these things. For me it is just making aesthetic choices—this looks good with this, or this creates an illusion with that. But what happens all the time is that for them it is so much more. There is a deeper meaning for them that I didn’t anticipate. I am making connections that they would never make otherwise with their stuff. It always has deeper meaning because it is their stuff and they live with it. It strangely becomes therapeutic—like I am a therapist of sorts. But all I have to do is arrange things, and I create some sort of bridge for them. 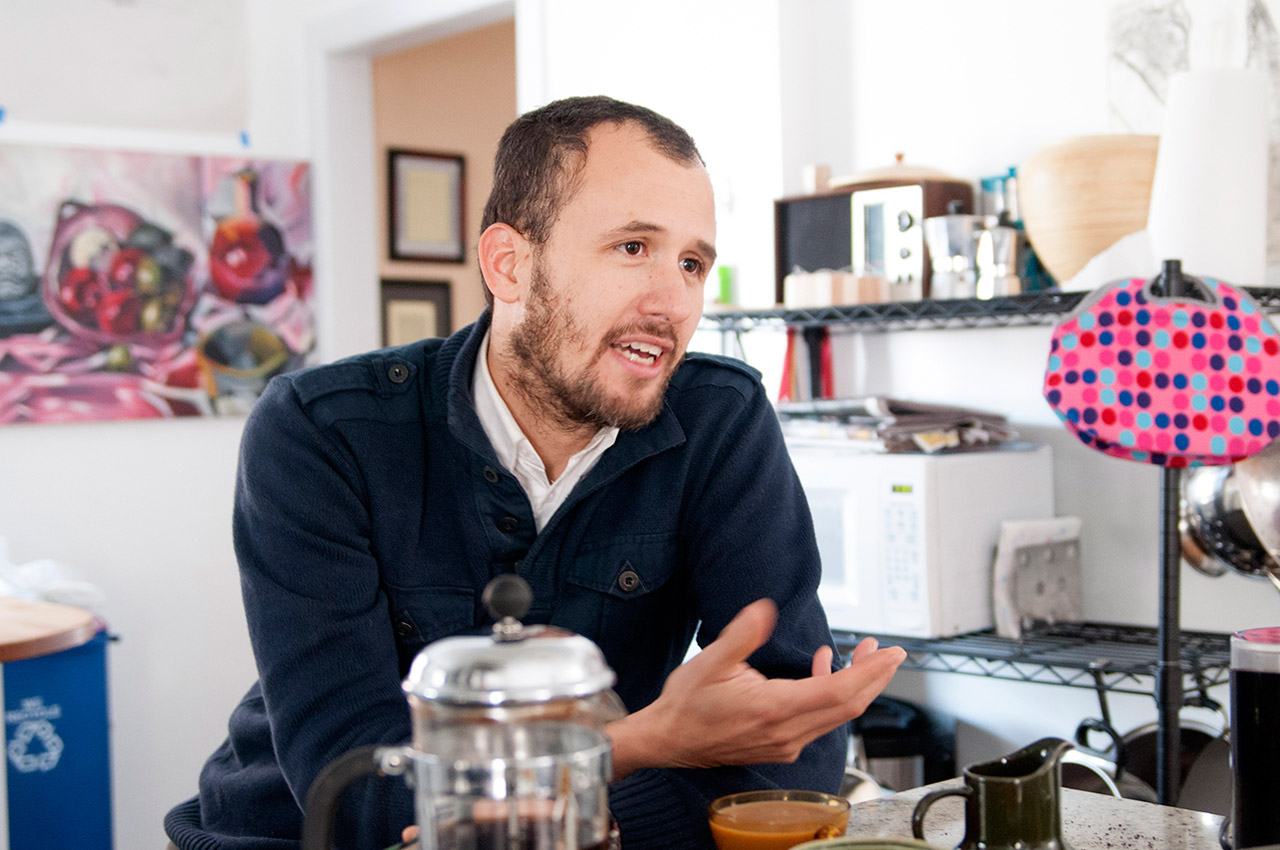 What inspired you to continue to make the monuments?
It just made sense. It was this idea that I did not need art materials to make something anymore. Like everyone, there is this weird resentment that comes with art stores and the amount of money that you have to spend at these places. I think making this realization that you go to art school for so long and they talk about archival materials and always using good ingredients to make work. At a certain point I realized that everything that was taught to me in art school is not true. Why do I need to make work that is archival? Why can’t I just use the stuff that is here to make work? There is a long tradition of using found objects to make artwork. Why can’t I just use the materials that exist in my home to make work?

I tried to keep a studio after graduate school but it just wasn’t a realistic idea for me. It wasn’t practical—this idea of having to leave the home to go and work at a studio. It was a revelation for me to be able to make work in the midst of home activity.

All these things that I do have so much significance for my kids. They are like symbols for them, markers. These things become legendary in our family lore. All of my kids do it in their own way. They have their own own name of the Domestic Monuments. They call them ‘Dismonumonuments.’ They mispronounced it and that is just what it became for them. 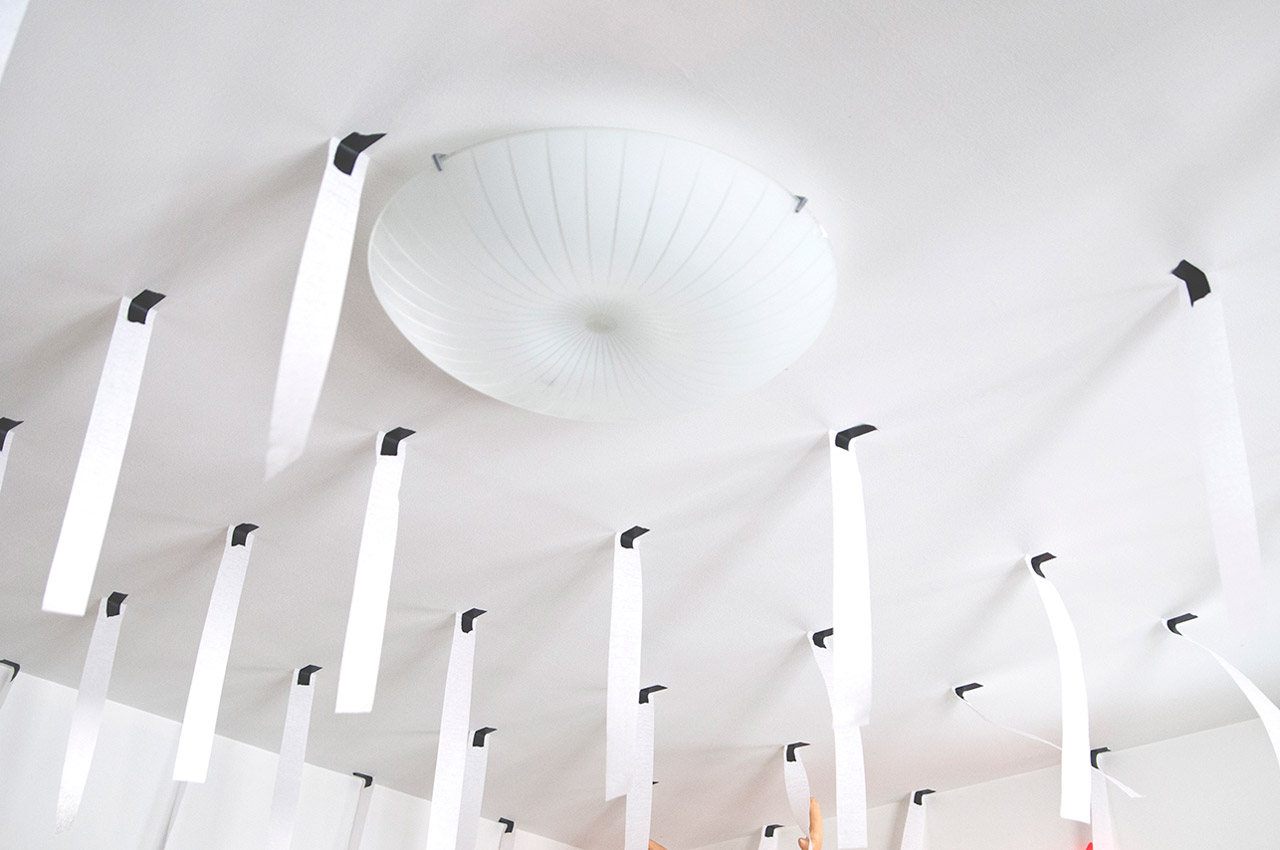 What is your infatuation with stacking?
I think it has to do with making decisions. One easy thing to always set as a default to is organizing things by size. Going to a restaurant it has always been so hard for me to make a decision about what to get. I used to beat myself up about that, that I was so indecisive, but I think I have finally come to grips with the fact that my indecisiveness makes me a more flexible person. Where people see it as indecisive, or see it as a negative attribute, I think of it as something positive where I am more flexible. I default to size because it’s an easy decision maker and I always like the results. It’s like collage. You don’t know what the end result is going to be, but it is always surprising. What object are next to each other because of size. Sometimes I make playlists that are based on size. You try to make something so poetic by arranging the songs, sometimes it’s corny. If you just left chance or size be the deciding factor, it ends up being more interesting. It’s like I never would have put that in that order otherwise, but it works. 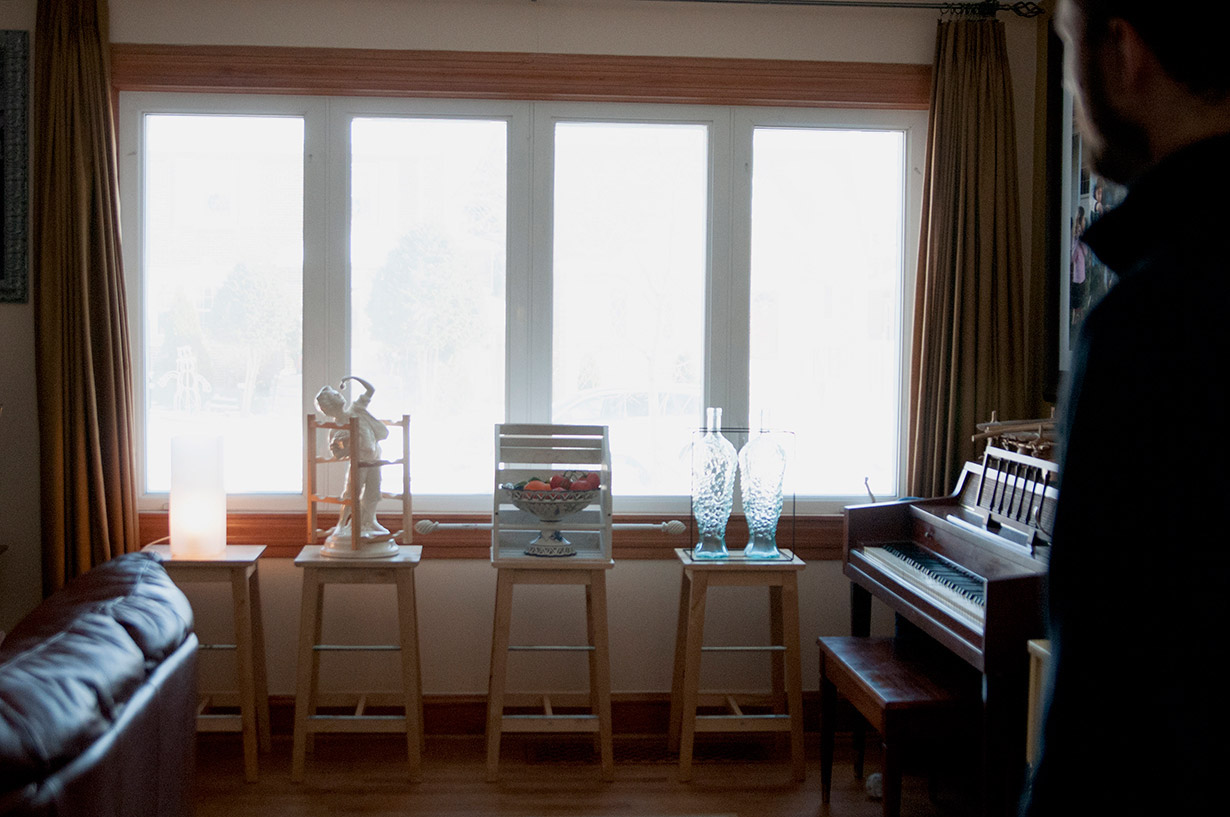 How do you think that objects come to have sentimental value?
You spend so much time with the object and it travels with you. It’s part of your daily existence, so at a certain point it gains momentum and power as the years go by. It’s been with you through all these transformations and changes that you go through. It almost becomes a symbol of another point in your history. I had my students make all of of these drawings throughout the semester. I told them that you might not think anything of these, but you should keep them and relook at them and decide after a year what you want to do with them. With time the drawings will gain momentum, they will gain power. They might teach you things in a year that they cannot teach you now. Time is essential to make that happen.

I like this idea that the objects can return to their original purpose. It doesn’t have to stay art. I’m not putting extra things into this world—it’s more about making connections.

We bought this house seven years ago. One day I was walking outside and this lady stops me in the middle of the street and she started asking me questions about the inside of the house. She told me that she was the daughter of the original owner and I told her to come in. She started telling me stories about the house. Then she came back another day and brought me photographs of the house. She gave them to me, thinking who better to have these photos. They are the original ones. It makes [the house] so much more powerful and you appreciate everything so much more.

For me it’s the moment for sure, that’s it. But I think the preservation of that moment is the vehicle to take that to other people. In photograph form it’s a vehicle of communication or a bridge of communication. I think there are different vehicles to use. It could be photographs, but I also play with this idea of memory and exclusivity. 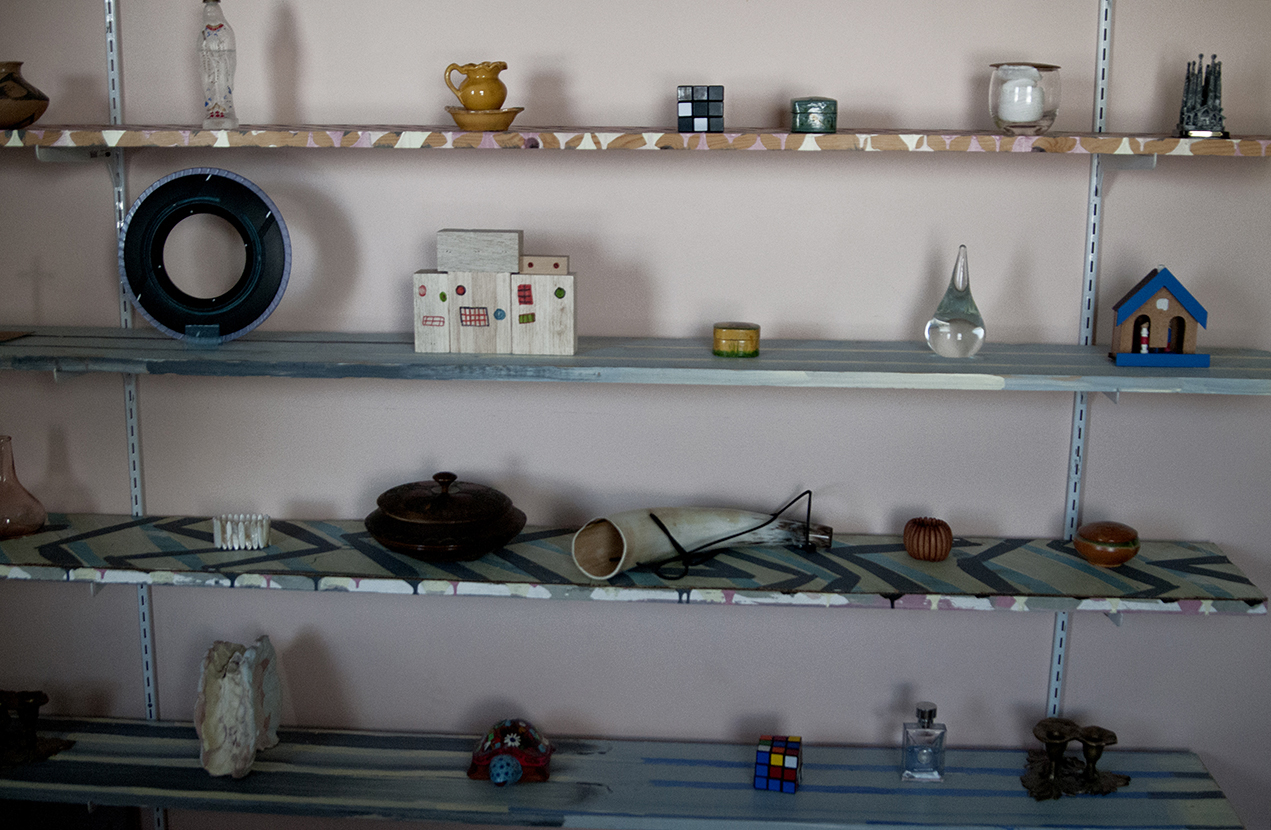 Do you feel like you play with nostalgia a lot in your work?
Yeah. Definitely. Nostalgia can be a corny thing. I had this teacher when I was an undergraduate at SAIC, he was a much older male, and I would paint these very nostalgic, romantic images. He would get really annoyed with me and one time he said to me, “Why do you always try to paint emotion into your work? When you get older you just feel.” In a way that is a very impactful statement because this guy was older and he lost his wife and that was common knowledge. I think it also had to do with this thing about people when I was going to school being so anti-corny, anti-emotional. Art was supposed to be this unbiased, distant and cold experience. I address those emotions and sometimes it is making fun of the fact that they are looked down upon or sometimes it is questioning their ability to be art. But I like that my art doesn’t exist as a tangible work sometimes. To me that’s exciting that there is no object. 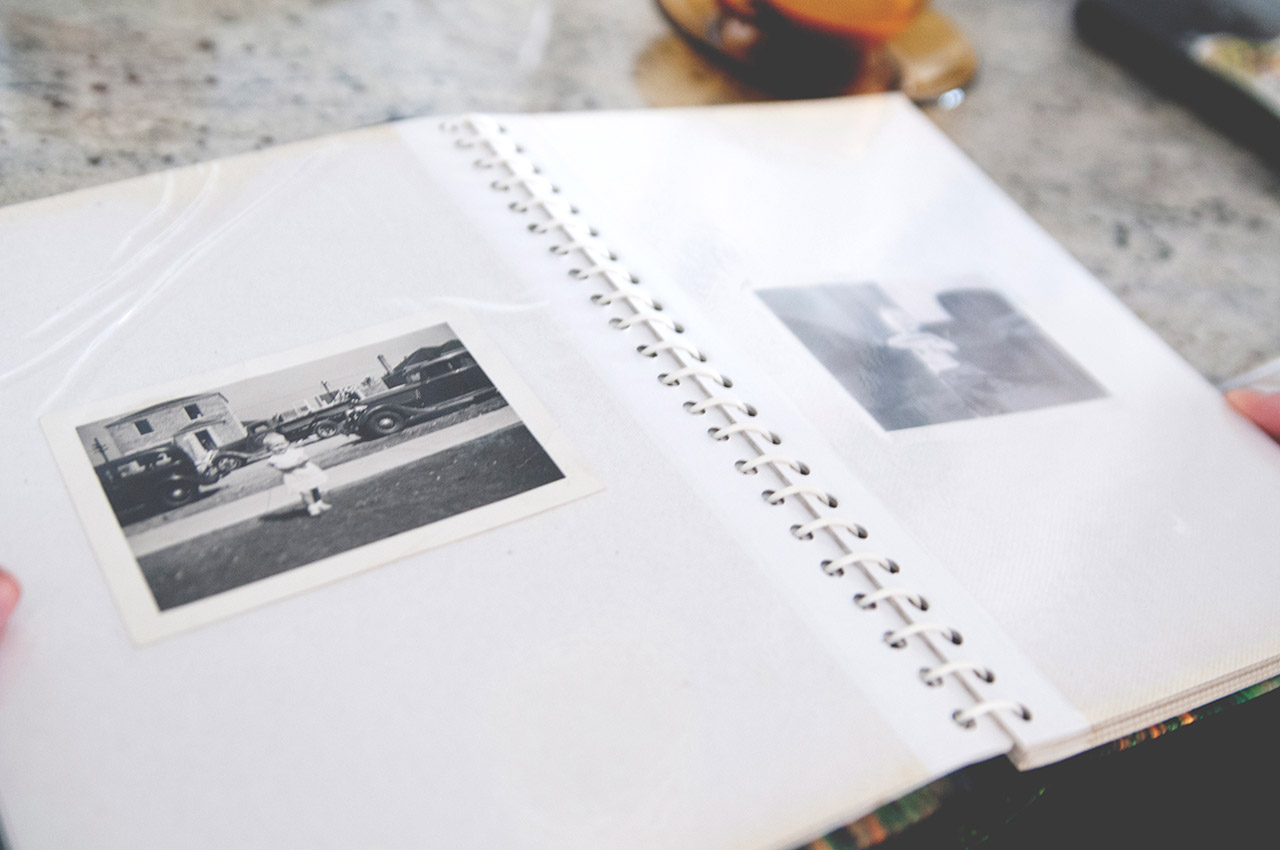 Why are so many of your pieces of work created with borrowed objects?
I think that has to do with taking up space. As a painter who never sold work, one thing that always disturbed me was having to babysit these things that I make. At a certain point when I run out of room I have to take them to my mother’s house. All these hours of work, just sitting there in the basement not doing anything but corroding. That always kind of disturbed me. I like this idea that the objects can return to their original purpose. It doesn’t have to stay art. I’m not putting extra things into this world—it’s more about making connections.