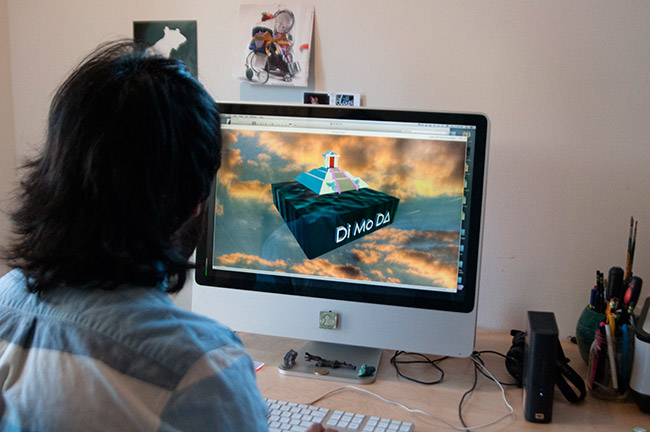 Alfredo’s virtual reality constructions delve into the exploration of both digital portraiture and architecture, creating online spaces for our society’s structures and those who inhabit them. Producing digital models of the exhibitions he participates in, Alfredo ensures the shows live forever, outrunning the restrictions of fixed physical spaces.

I\W: Can you explain your project Di Mo Da (Digital Museum of Digital Art)?
ASC: It is an online, 3D-navigated space. I have been getting really into architecture through building this project. For the museum we will have portals to enter different galleries within the museum which will each host a curated show, or solo exhibition. Instead of navigating to a gallery, you will enter each through a portal. We wanted to take full advantage of the platform and virtual reality. There are a lot of online galleries that just emulate a real gallery, and I think that’s kind of cool, but that is not taking advantage of what computers can do for you. We are also developing the project for the Oculus Rift. I am doing all the modeling and architecture and my friend William Robertson is doing all of the coding. The architecture for the museum is Mayan and Greek because it is a combination of both a classical canon and my own culture. I have been really obsessed with this idea of Mayan new media that came up back in 2011. 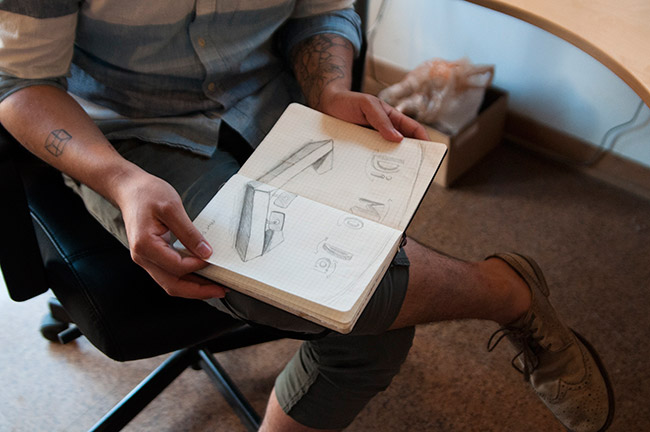 What is your obsession with Quetzalcoatl?
The obsession is multifaceted. I am Mexican and grew up with my grandpa being a tourist guide and history buff in Mexico. He would spend all of his time learning about Mexico’s history and Pre-Hispanic history. I grew up around this and he would always take us to these ruin and archeological sites. Quetzalcoatl is one of the main gods of the Aztecs and Mayans, and is this supreme bringer of everything good and everything evil, all at the same time. I always identified with this deity, and I guess it goes along with my personal mythology. I was born in the Chinese year of the dragon, I got really into it. Every time I create a Quetzalcoatl, it is a signature of myself. 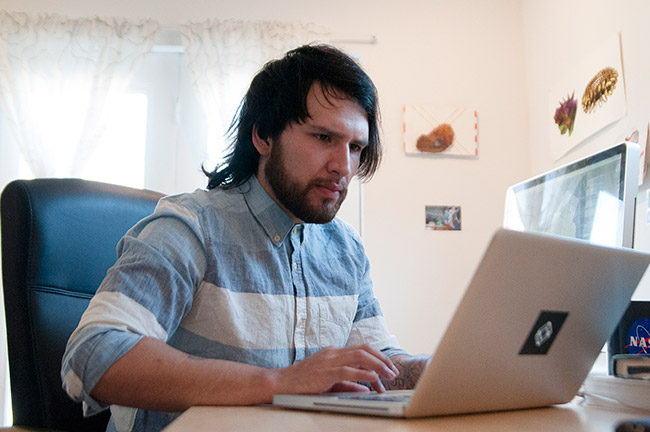 Does this also relate to our society’s increasing technological addiction?
I am keeping up with technological developments maybe more so than other people, so I kind of take a dual perspective of it. I am really enthusiastic about it and can’t wait to be a fully augmented cyber human, but at the same time I understand that there is a whole dark side tied to a lack of privacy. These wonderful machines also have to come from somewhere, and the more we adapt this technology, the more that comes from really poor countries. This idea of something that is awe-inspiring is beautiful and terrifying at the same time.

How are you utilizing the technology to express this theme?
Dither_D00m came around in 2011 right before the whole 2012 end of times predictions from the Mayans. Our society loves the idea of these apocalyptic predictions. Quetzalcoatl had a lot to do with it, saying it would return and define the beginning of a new era. We created Dither_D00m to showcase these apocalyptic messages we were creating. It was really dark and kind of nihilistic. I would maybe call myself a bit of a nihilist, but maybe a positive nihilist. Dither_D00m came from making fun of what was happening at the time in 2011 which was this Greek new media shit. That was kind of a big thing that happened, a micro-movement. We thought it was all about Mayan new media as a joke response, and thinking entirely the opposite of what that was representing. It started growing from there and eventually became a performance group. 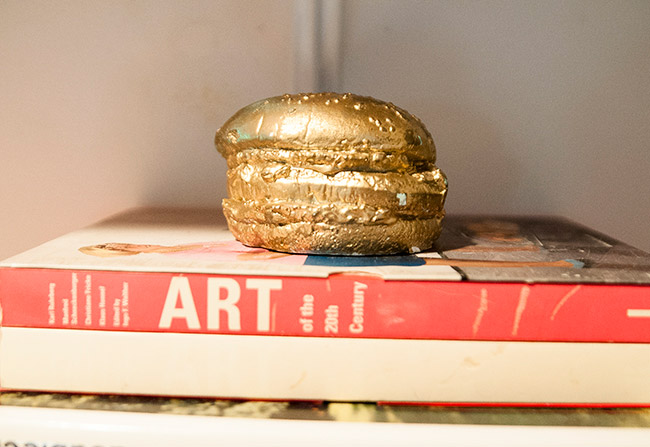 I am keeping up with technological developments maybe more so than other people, so I kind of take a dual perspective of it. I am really enthusiastic about it and can’t wait to be a fully augmented cyber human, but at the same time I understand that there is a whole dark side tied to a lack of privacy.

Did you start your practice focusing on film?
No, I actually started out in sculpture, and that was all I wanted to do. I used to be a serious sculptor, and then discovered video.

How many periphery projects do you have running simultaneously?
A lot. It is kind of problematic because I am also making music videos for other people and doing other projects and it is this frenzy of creating. In a way it helps me thrive because it keeps me always doing something. Sometimes I feel like I half-ass things because I am spread so thin, but nobody knows the difference between something that is half-assed and glitched. Maybe that is demanding of myself—when I finish a piece I know that I can be satisfied, but sometimes I wonder what it would be like if I could focus on single projects at a time. There is also the internet nature of my work where you need to always be producing material. Part of the culture that I feel like I belong to is this net culture, and these things that you are constantly updating like Tumblr, Facebook, Twitter, etc—which are part of my production mode now. If I am not in 100 different places at once I feel like I am not doing anything at all—I am nowhere. 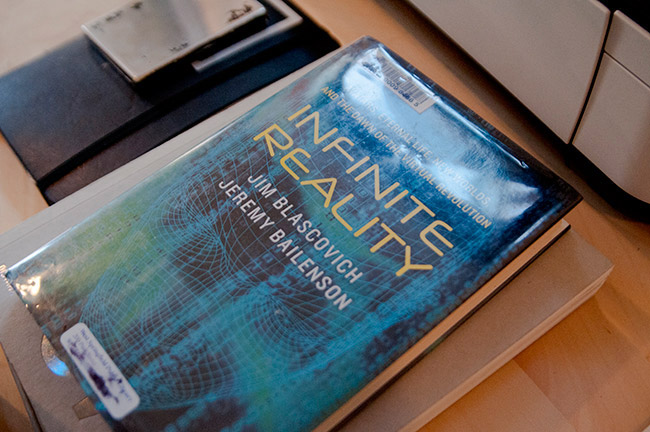 How do you feel like you fit into the glitch art scene?
For this past show Paul Hertz asked me if I consider myself a glitch artist, and I said no, because I don’t think I am. I think I am just an artist, but the influence of glitch on my work is totally undeniable. I wouldn’t blatantly say that is what I do. I know a lot of people in which that is their entire practice. I think I am more interested in approaching glitch from a more lateral way where I can grab references to glitch whenever I need to, instead of dedicating myself to just finding glitches. I do find it to be something very contemporary and relevant to our everyday life. We experience glitches daily, and they are not always cute. I am a parallel of the scene and I feel like when I came into it, it was already thriving. I don’t feel like I am a founding artist, I feel like I found it and they embraced me and I embraced them, and now I am floating around it. 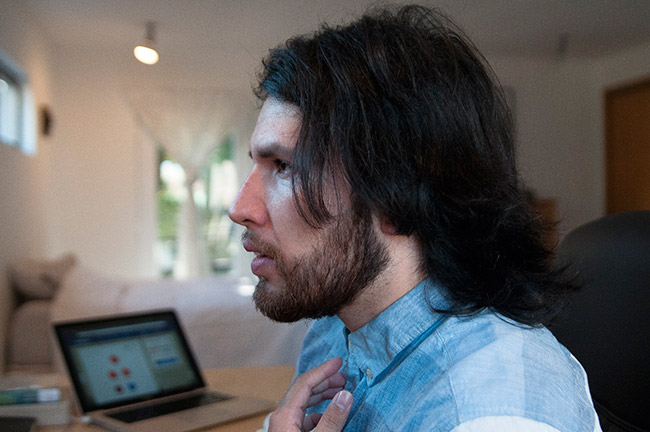 You seem to have many Surrealist influences. Do you feel like you are contributing to a Surrealist new media?
I have definitely thought about that a lot. Here is a total cheesy bit of information, but the day Salvador Dali died was the day I was born—January 23rd 1989. Dali is hugely influential to a million people, and personally I thought he was great because he was so ridiculous and honest. I would definitely say that there is a Surrealist influence. The digital portraiture I create is coming from painting, even though I haven’t touched a paint brush in more than a decade.

You often create a digital space for the exhibitions you participate in, either during or after their run. What is your purpose for creating these parallel digital spaces for the exhibitions?
I just think that is the only way, because the majority of people will see the work online. Only a very small percentage will see it physically because they are in a fixed physical space, and it has a limited showing. The documentation of it is always going to be more widely spread than the actual thing. For example Di Mo Da is breaking that because there is never a physical space at all. You can look at it any time. For this case I wanted there to be an online aspect to my exhibitions as well, because I knew that was a way to have the shows live on.