Allison Reimus: Contending With the Edge 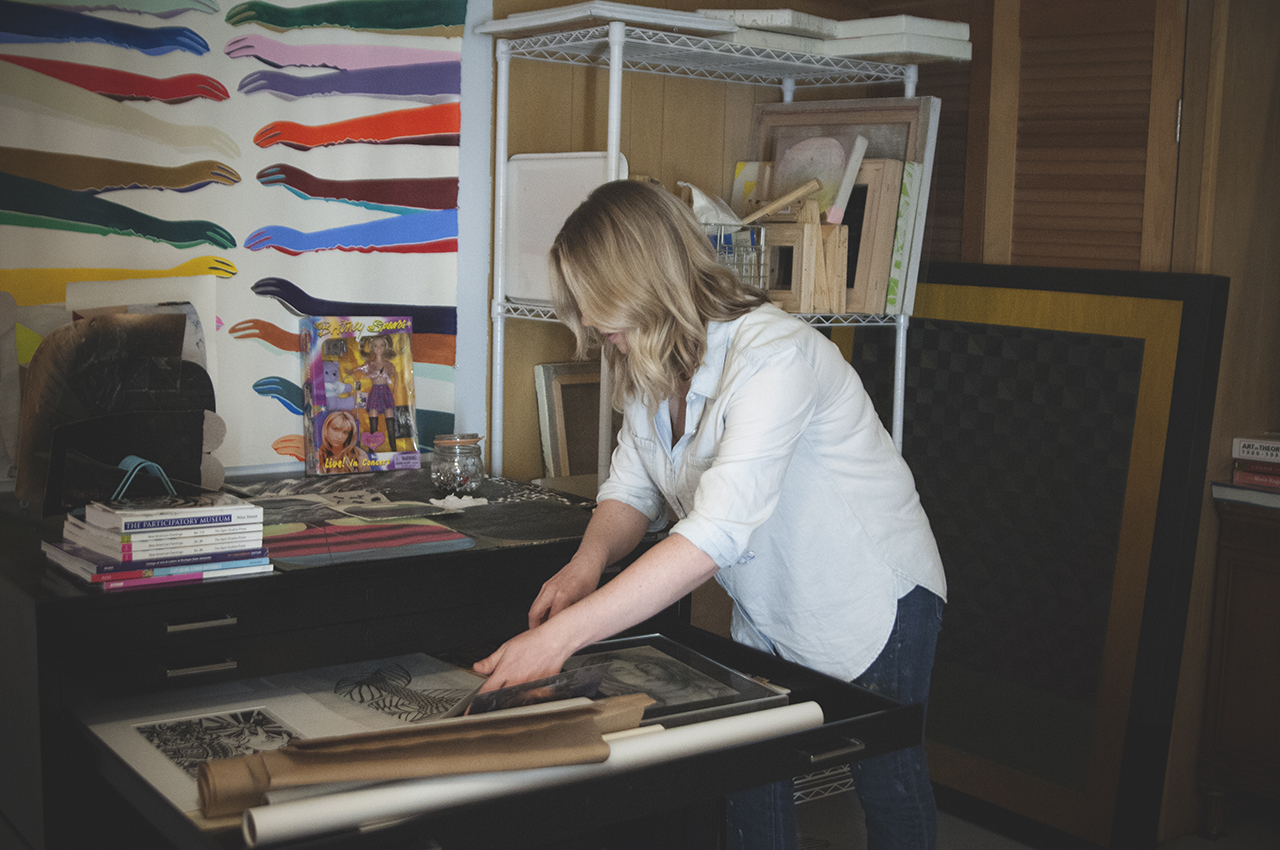 Allison flattens 3D vessels onto her canvas, concentrating on the static object as an active subject. Constantly thinking about what her vessels should contain, Allison has begun to add texture to her works—first discovering the idea to layer alternate materials after a piece of her ceiling literally fell on her head. Observing both the subject (vessel) and painting as objects, Allison continues her paintings to the edges of her canvas, allowing the often looked over area to become another focal point in her piece.

I\W: When did you start your vessel painting series?
AR: I went to the takt residency in Berlin in 2012 and it was amazing. I visited lots of museums and was constantly looking at different types of ancient utilitarian vessels. I kept thinking how at one point they were strictly for function and valued for their usability, but how with time their value and meaning shifted. They were once useful and necessary objects and now they are displayed behind glass and taken super seriously for entirely different reasons. When you take the practicality out of an object, its either forgotten about or eventually praised for its decorative qualities—its historical significance or both. I couldn’t help but relate those ideas to painting. I spent most of my residency making crap and finally in my last week I made some vessel paintings and it just felt so right. I came back to Chicago and have been painting mostly vessels ever since. 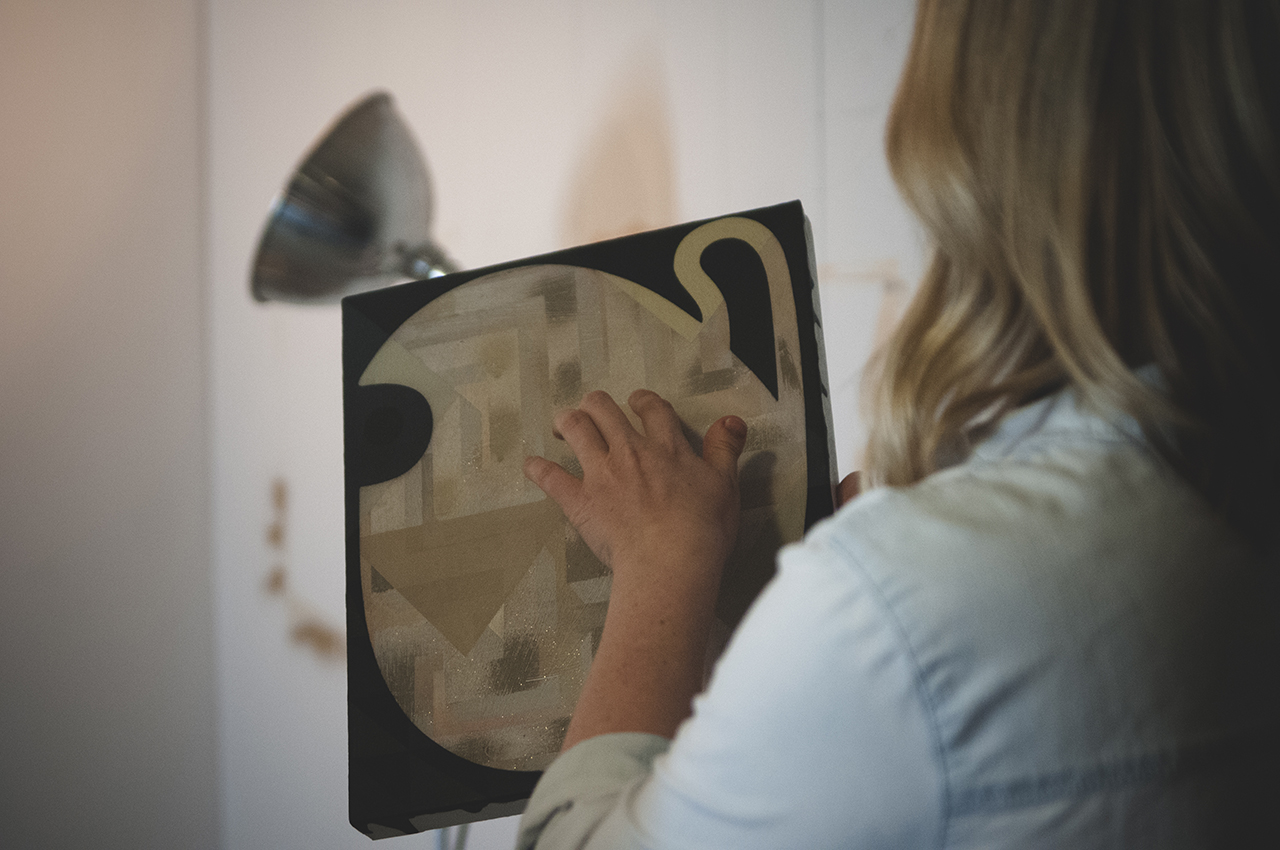 What was your interest in flattening these 3D vessels into 2D works?
My obsession with vessels also relates to how I was raised. My mom and grandma have always had an interest and an attachment to their milk glass collections, and other decorative vessels and objects. I’m always wondering what kind of value the objects have to them, whether its aesthetic, sentimental or monetary, or maybe it’s just for the thrill of the hunt. I felt the need to explore this in my work which has always been two-dimensional. I’ve also really been into historical still life painting for as long as I can remember. I think that having a personal and familial connection to a group of objects made a broad subject seem more accessible to me. 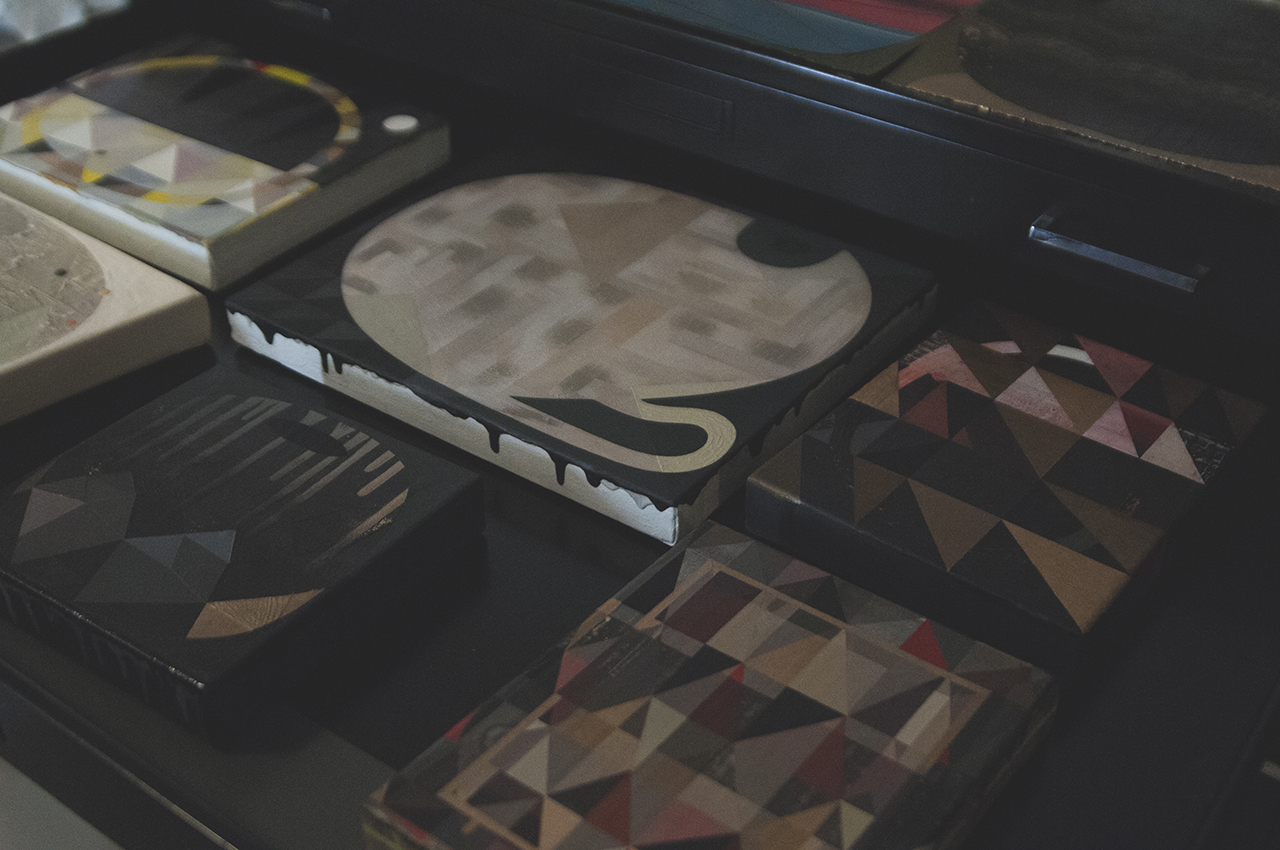 You’ve often talked about the shift in your work after having kids. Can you explain exactly how your practice has changed?
Sure. I think my work has gotten more interesting to make because living life has became more interesting, and that carries over into my practice. The typical studio day has totally changed, meaning, there is no typical studio day. I try to work when my kids nap, at night, and on weekends. Somewhat regularly, my husband will use his vacation time so I can have whole uninterrupted days. It’s like your life goes into a sort of chaos and hyperfocus all at once. It’s a weird thing to figure out at first, but like all major life changes, you eventually do because you have to. Now I have only a few hours here and there for studio time and I can’t waste it. That forces me to make bolder decisions. I have given myself permission to not be so hard on myself and to loosen up. Trusting my own instincts without fear is something that parenting has taught me. If I make a painting move that wasn’t the best decision, I know I can go back and change it. No big deal. It makes painting fun, and why not try to have fun? I don’t sit around and anticipate every decision anymore, I just try the things that feel right. I think that new attitude is reflected in the paint.

Has this loosening of your practice inspired the new materials you have begun to incorporate?
Yes, I think so. In my newest piece, I glued pieces of ceiling tile that fell on my head while painting. Like in cartoons when someone is trying to think of an obvious answer to a question and something literally falls on their head, that’s what happened. We recently became homeowners and that stuff happens—pipes leak and the ceiling falls on your head. Instead of getting mad, I thought it could be an interesting addition to the painting. Why not? I’m always thinking about what my imaginary vessels contain. This particular vessel now holds the ceiling chunks, which I covered in oil paint and metal powder. Obviously, they no longer identify as being part of a ceiling, but have become a decorative element admired by me for their texture and shape. They will cast real shadows on a real painting of a fake thing. That’s the stuff that really gets me going. I noticed that the light on the wall was casting a shadow from the chunks, so I decided to paint that shadow in. I don’t know if it matters to me if people notice it’s a fake shadow, but I appreciate those things in other paintings. I like the little decisions that slip under the radar. 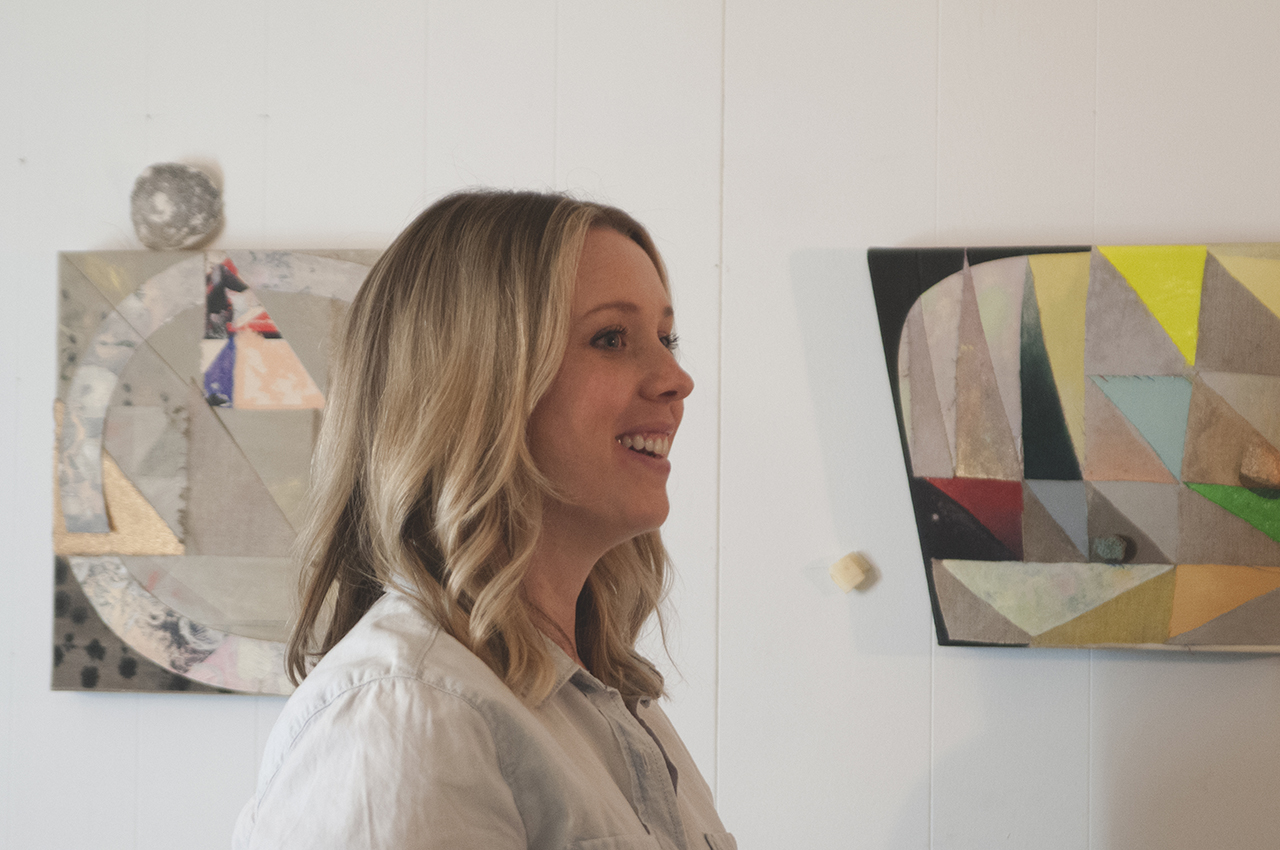 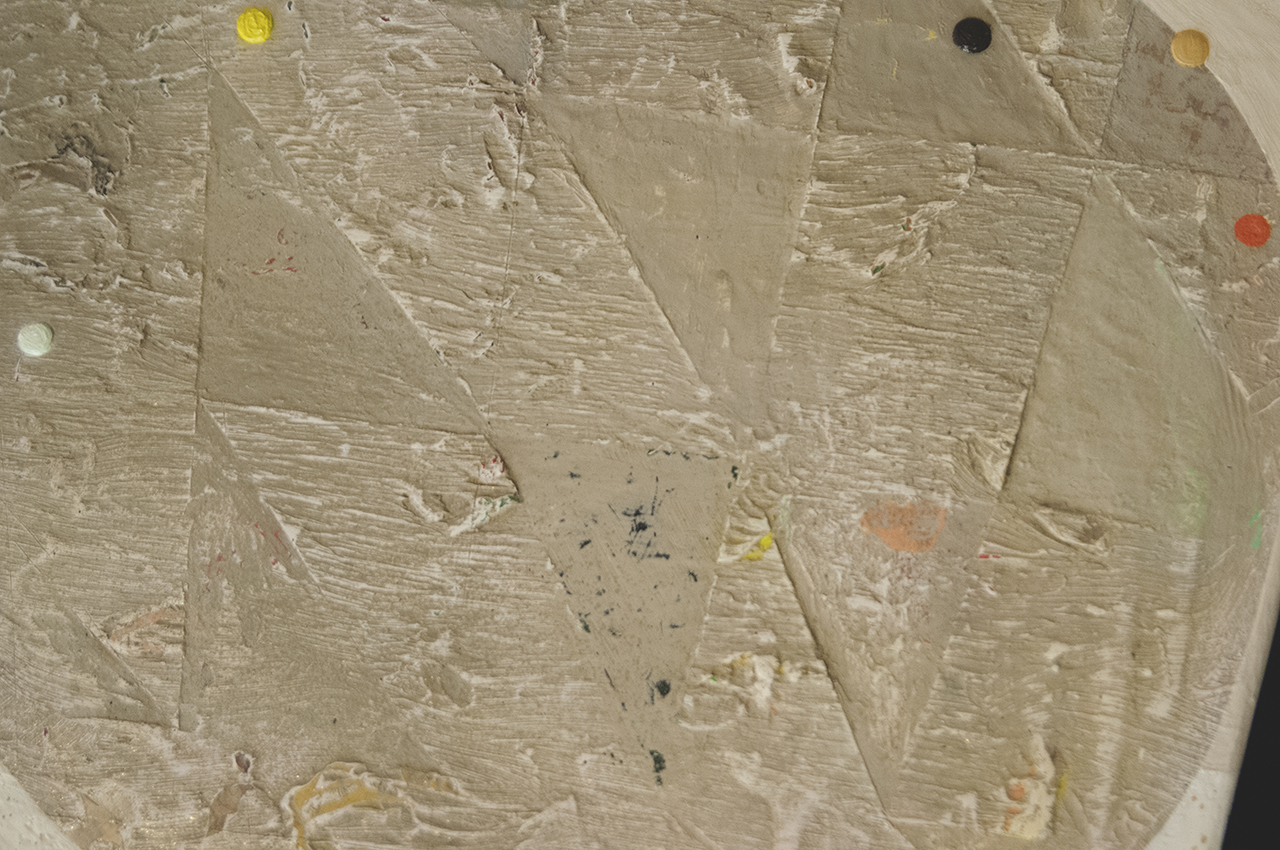 Can you explain your rhombus-like canvas shape you have begun to adopt?
That idea came after painting the vessels awhile, which were all rectangular. I wanted to try something new. I like to think about painting being like an object, so I figured I’d try to paint on a surface that was also shaped like a vessel. Is the image the object? Is the painting the object? Can they be one in the same? I wanted to make it feel like the image was pushing out the sides of the canvas, almost as if it existed first and the edges had to adjust themselves to mimic the image. So now I have two vessel shapes in the same piece. I love repetition with variety and addressing the same idea in multiple ways. The rhombus-like shape, I think, makes the edges seem a lot more relevant than the rectangle does when you think about how it relates to the content. 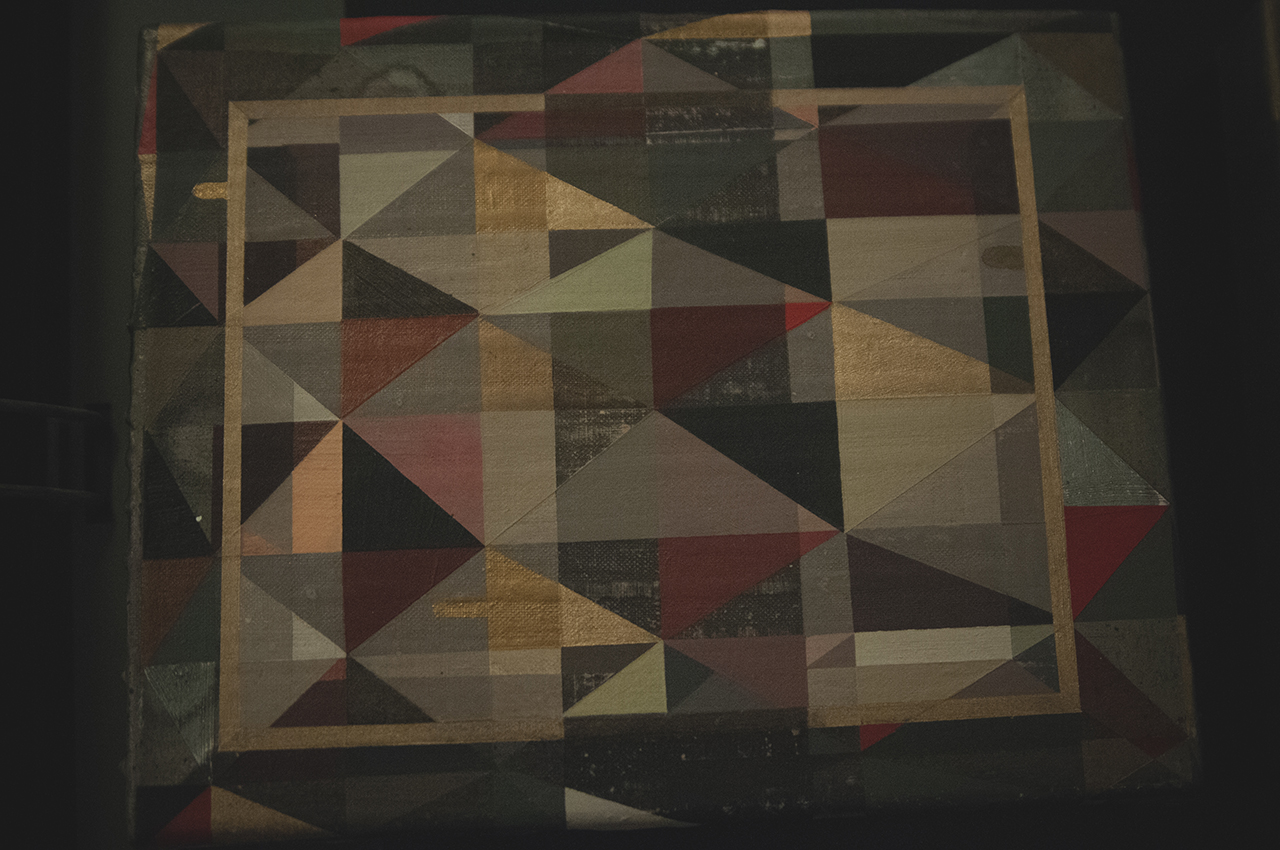 Why do you have this constant urge to collage?
I don’t like to waste stuff, so I keep scraps of paper, old work, and other materials I find interesting around the studio. Eventually I need a break from working on the paintings, or I get stuck and I need to do a different activity to refresh. Collage helps with that. I like the immediacy and I like the way it feels to manipulate paper and build up a surface that almost feels sculptural. It helps me think about paint in a less rigid way. Once in a while I’ll have a moment where I think I am going to work big and it never seems to work. That happened recently. I had a big, beautiful stretcher built but the painting was a disaster. I knew I had to cut my losses. I kept it around, not wanting to waste the materials, and ended up using it to collage bits on these new paintings. I am using parts of the failed painting and weaving it into new work. You could say that is a formal decision, but I think it also has a lot to do with the way I think—trying to make something work that shouldn’t. 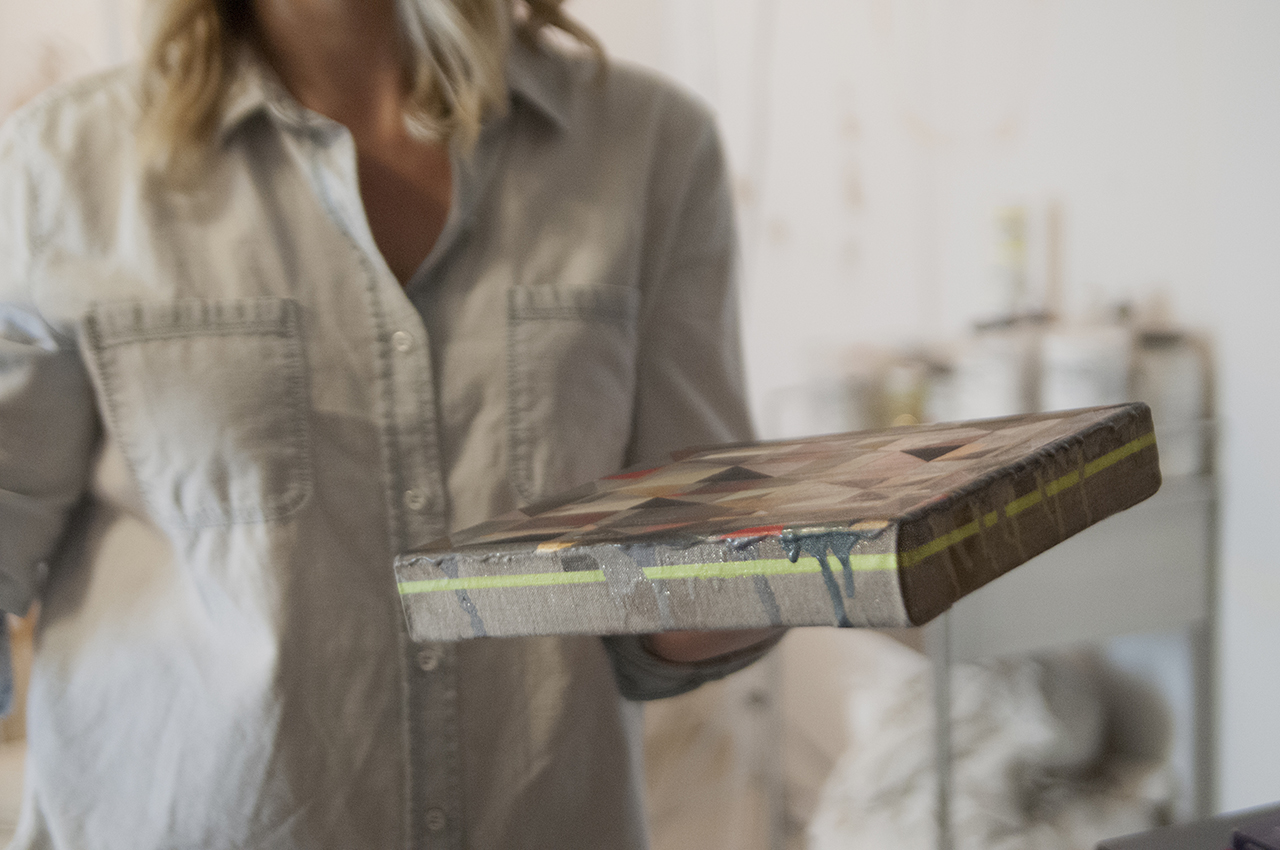 What is your process for creating each work? Why do you end up accumulating so many layers?
Usually my paintings start out really loose and gestural and I try a bunch of different ways to get into it. It could be a color combination, a shape, a texture, anything. My ideas change at least 15 times during the course of a painting, and then eventually I narrow things down and am able to bring it to fruition. I have a lot of moments where I think I know what I’m going to do but it all changes the next day. That takes a lot of decisions, good and bad, and therefore creates a lot of layers. Leaving areas where you can see past decisions and evidence of the hand is something I’ve been trying to do but I’m also still fighting that part of me that has a tendency to tighten things up. The paintings that I like the best of mine have this weird tension where they exist in both worlds and vibrate in-between.

Can you describe your interest in contending with the edges of each of your paintings?
Whenever I go to an exhibition I immediately look to the sides of a work to see if the artist contended with the edges. I am completely obsessed with them. The edges are evidence to the fact that a painting is not just a representation of ideas, but also an object and I can’t ignore that. It is so interesting to me that the direction of a paint drip on an edge implies the orientation of the canvas when it was made, in my case flat, but the object eventually hangs upright. Its a mark that puts the maker and the material on the same platform. Occasionally I use the edges to extend the composition and sometimes it works. If I think it feels arbitrary, or like an afterthought, I know I need to make the surface more interesting.