Connecting each aspect of his painting practice back to drawing, Bradley translates quick sketches in pencil to life-size works that create a physical connection between the viewer and the painting. Recently he has begun to incorporate the use of extended brushes as a way to break down this drawn dexterity, moving away from the predictable nature of each line. Color is then filled in to these large, sketched forms, a frozen narrative where contemporary iconography consciously dates the work.

I\W: How is drawing integrated into the process for each of your paintings?
BB: I really consider myself a drawer and not a painter. The way I try to understand every formal element in a painting is by thinking about drawing. I draw at every stage of a work—from conception, to imagining certain images or narrative ideas, to finally refining drawings that I feel will make interesting paintings when scaled up. Recently I have begun to draw with these long tools as a way to remove dexterity from my work, a technique I stole from Matisse. Things can get really predictable and I often end up defining the character of my line too quickly. I am trying to develop ways to remove the skill from my work. Sometimes to begin a work I will apply tinted gesso in the form of abstract shapes. After they are on the canvas I will put them through Photoshop and draw on them without being so committed, and try to find forms. I don’t project, I just find their natural form. After this step it is kind of like using a coloring book. There is no abstract expressionist romance where the paint is creating the painting on its own. If I decide to whimsically alter the painting, it is usually based on a narrative idea, or because the larger scale has declared some abstract necessity, or graphic necessity. 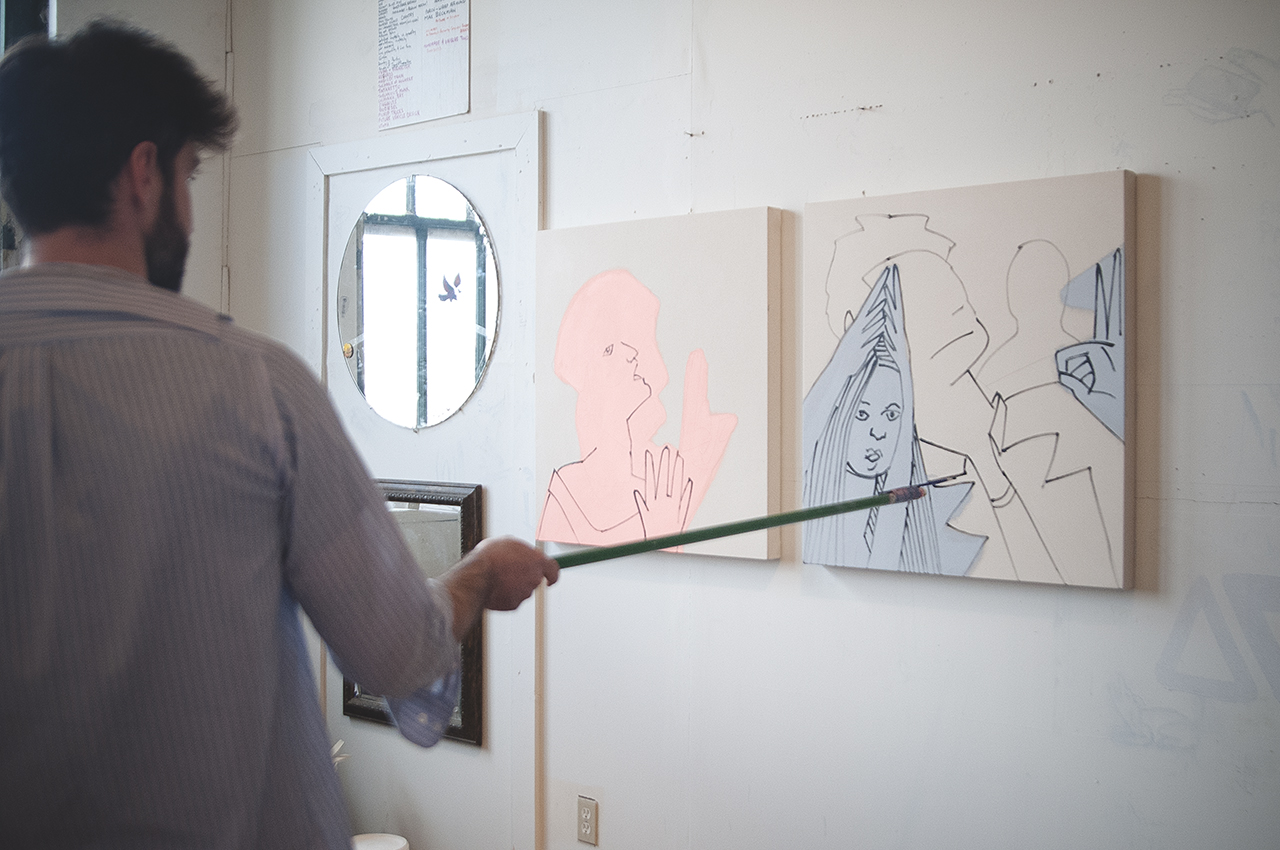 Do you attempt to produce a narrative for each work?
Not an explicit narrative exactly. I would like the narrative to remain open. I do however try and collect loaded symbology for each work. Recently I have used yoga pants and really florescent running shoes as well as the iPhones that I have been painting for quite some time. They used to have blank screens because I wanted them to seem empty. Now I want them all to have clocks on their displays as their imagery. Each one is going to have an old fashioned clock on it from here on out. The clock is a loaded symbol, the icon is a loaded symbol. You can interpret it in many ways, but it is also alludes to a specific narrative.

Why such specific choices in the clothing for your characters?
The yoga pants and shoes point to both fashion and a lack of fashion. I feel as if they are super dated. If you see a narrative figurative painting in a couple of years where someone is wearing yoga pants, you are going to know that they produced the painting sometime between 2009 and 2015. I think that is a good thing for my work. A lot of time people think that because a work looks dated that is a negative, but I think those are positive things. Figurative narrative painting, all of those things together are the most traditional, classic modes of working in art. It’s important for me to embrace contemporary iconography because just by their nature these paintings are connected to art history, which is also an important move for me. 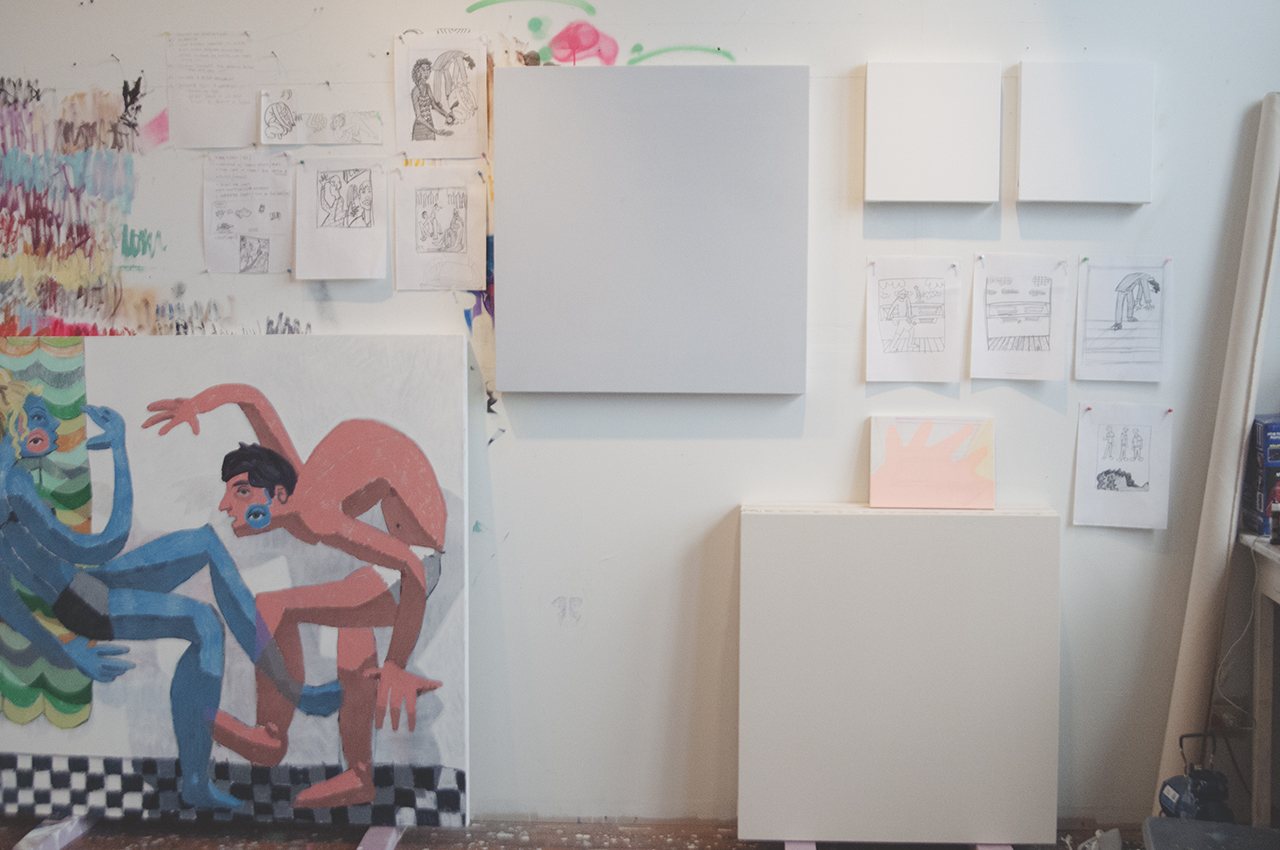 Can you explain your titling process?
I think it is fun to title my works. I would like them to be a clue to the narrative, but not be an answer. I also love allegory in painting too. If they are going to be ambiguous narratives, then I want the titles to hint at whatever that allegory is. In my show at Johalla Projects, one piece had two titles: An Active Nook and Tub of Damocles. I called it an active nook because I was thinking of a closed and staged set. I come up with a title at the beginning when I am creating the drawings, and then another title will sometimes happen through working on the painting. Damocles is this mythological character that always had this dagger or sword, he was a king that made a deal with Dionysius and he always has a dagger hanging over his head to remind him that power is tenuous. The composition with the penis in the middle of the painting was this almost violent but cartoony image. I wanted to relate it to actual art historical allegory. Even though you can make that image, you can read into it more and it can actually be about that sword of Damocles, but that type of thing isn’t so important. Keeping an open read is most important for me.

Why do you tend to work so large?
I don’t think I work so large; I used to work larger, but I’m trying to be more economical these days. I want the figures to be roughly human scale because I like this physical sensation where you feel connected to what’s going on inside the work. The idea of walking into to a painting, bringing a deeper physicality to it. I think a lot about scale, because I constantly struggle with scale translation. I’m very comfortable drawing with pencil on a small sheet of paper; this is the scale within which I invent. But my painting mark is large, and I’m most comfortable working larger (human scale); however, I’m always struggling to get the same sense of immediacy in my large painted mark that exists in my spontaneous little pencil line. I start painting these characters and then sometimes they appear as individuals in my life, but I don’t plan on that going into a work. It can be an abstract painting cliché. I like romantic notions in art, but I guess I try to think about abstraction in a different way. The narrative being abstract rather than the imagery being abstract. 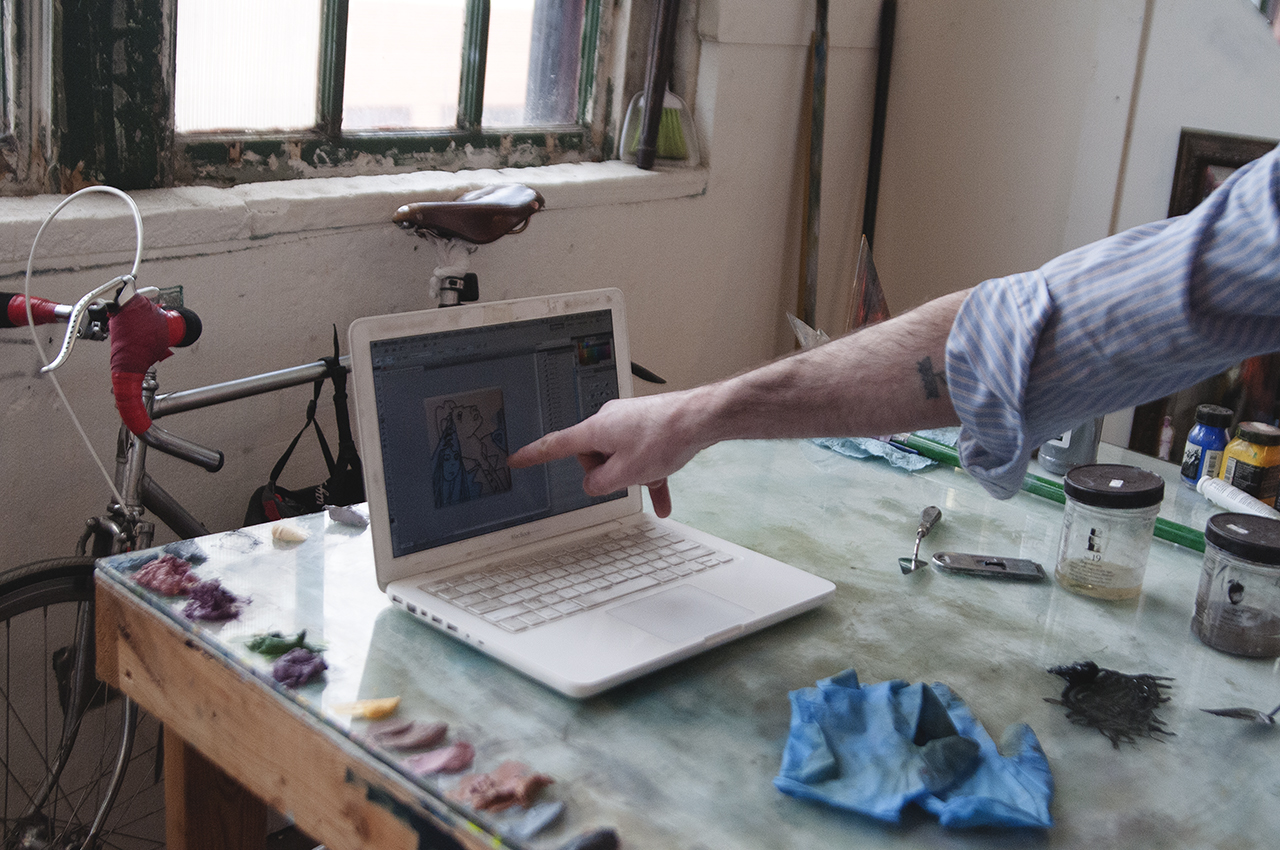 What is your obsession with bathtubs? You seem to have a fascination with placing your characters in the bathroom.
There are lots of allusions and a lot of potential in terms of an interior environment or any kind of environment. There is a lot of potential for interpretation in the bathroom as well as a lot of symbology that can occur. You can be alone in the bathroom and there can be intimacy with you and someone else, there can also be a sexual situation or a lonely situation. In terms of narrative there is a ton of potential. Presenting a story is important so you have to make a decision on the site. I was meandering two and a half years ago and made a couple of bathroom paintings and kind of came to that realization that I can paint water, I can paint reflections, I can paint patterns, I can make nudes and it all makes sense in that setting. It can work to my advantage narratively. I was working closely with one of my heros and she said, “You should stay in the bathroom for awhile.” Now I’m just trying to get out of the bathroom.

Why did you title your recent Johalla Project show “More Maladroit Mojo?”
I called it More Maladroit Mojo because I like the idea of clumsiness and awkwardness. It is very important and always has been in a way because it is exploiting your own vulnerability in art it is super important. I don’t like looking at art that takes itself too seriously and it is impossible for me to be too serious and pretend like I am in control as an artist, so why not make the narrative about control or being awkward. I did one painting called Beer in the Shower and I was taking some process shots of it and I sent one to my friend when it was close to finished. He explained that he loved the painting in the beginning because it looked like I was actually drunk when I painted it. What I understood, is that it would be beneficial to be always present with the painting when engaging with it. The mark-making should not be rehearsed, but it should always be the final mark. It should be consequential to the narrative, to the represented thing being painted. Of course, this is a very difficult prospect and doesn’t always occur so easily. 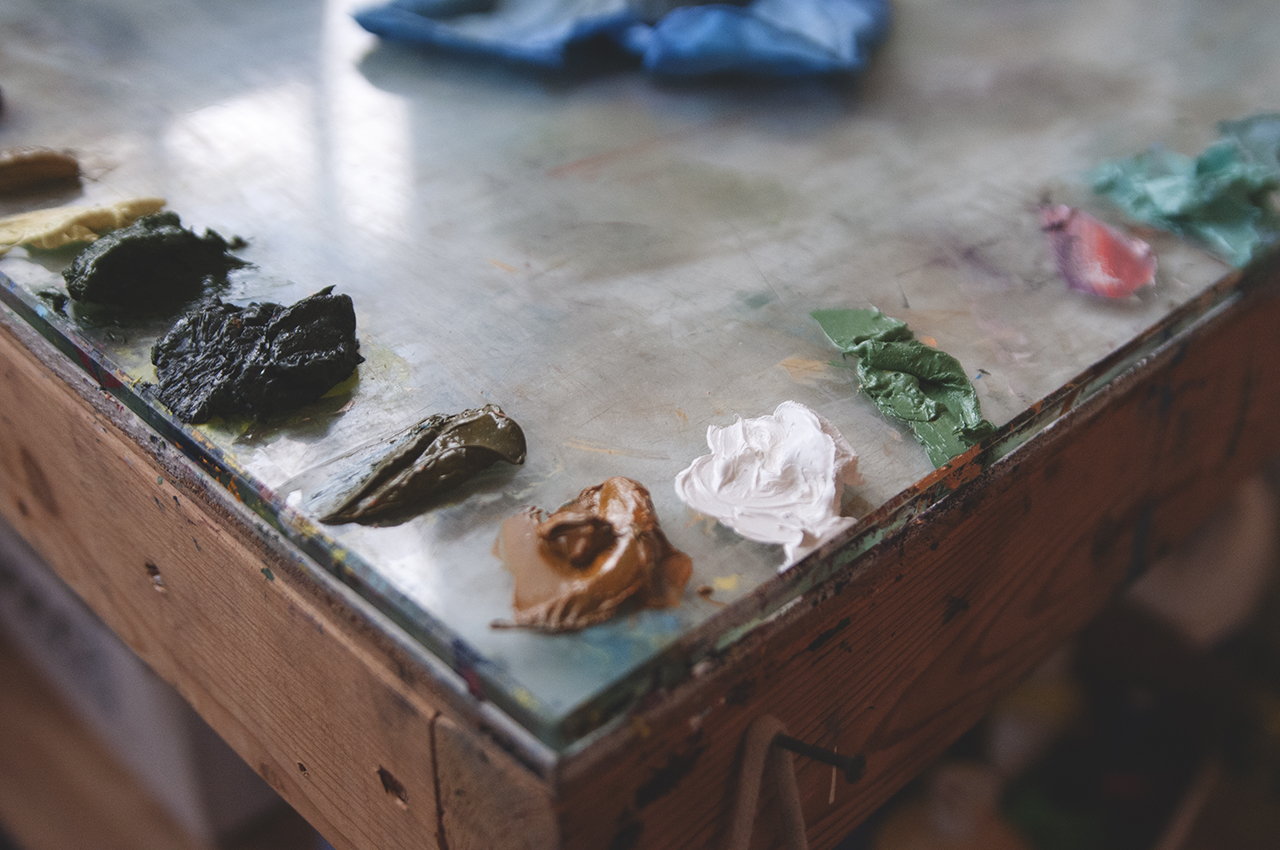 Why do you paint the edges of your canvases? What does that confront for you?
The patterns are purely decorative, but usually refer to something going on in the painted image or narrative. For the same reason that I sign the front of the paintings, and the same reason that I embrace any sort of taboo in the painting world—because I’m trying to assume the absurdity of the act. No one cares what you do anymore in painting because there are no rules and everyone is just rehashing modernism and art history in different ways. There are however a few taboos that are frowned upon. The painting is an image and not an object so you don’t consider the sides of the paintings, they are supposed to disappear. Signing the front of the painting is so outdated and ridiculous and egotistical. 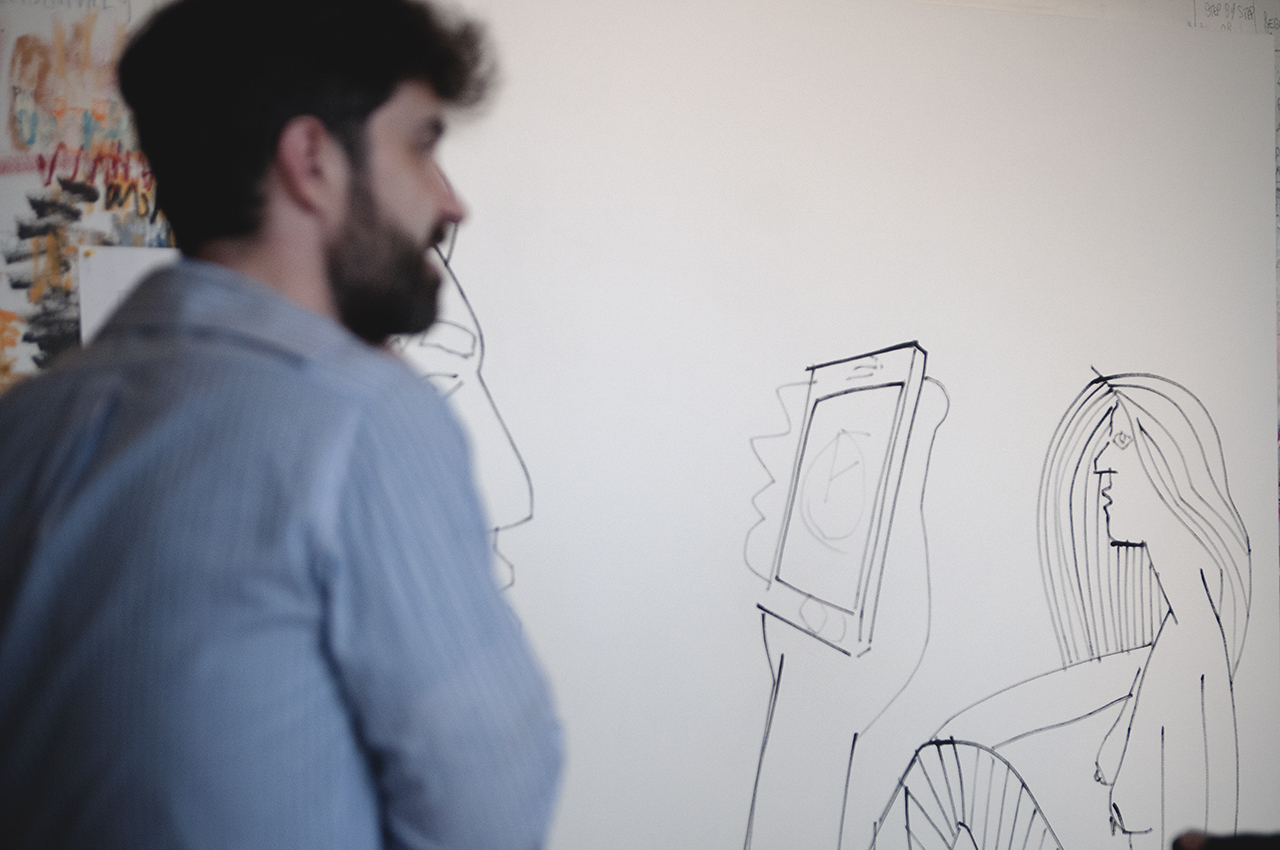 The mark-making should not be rehearsed, but it should always be the final mark. It should be consequential to the narrative, to the represented thing being painted. Of course, this is a very difficult prospect and doesn’t always occur so easily.

How do your woodblock prints fit into your practice?
It’s always been a printmaking process that I was attracted to because all printmaking is very much based in drawing and historically it’s used to tell a story. It’s also a challenge if you are talking about just black and white images, it is a challenge to compose a readable image that is semi-realistic. I have only completed two, and the first one was for my Devening Projects show last fall. It was a surprise for me how well it fit into the language of my paintings. I of course love the drawing that is involved its process. 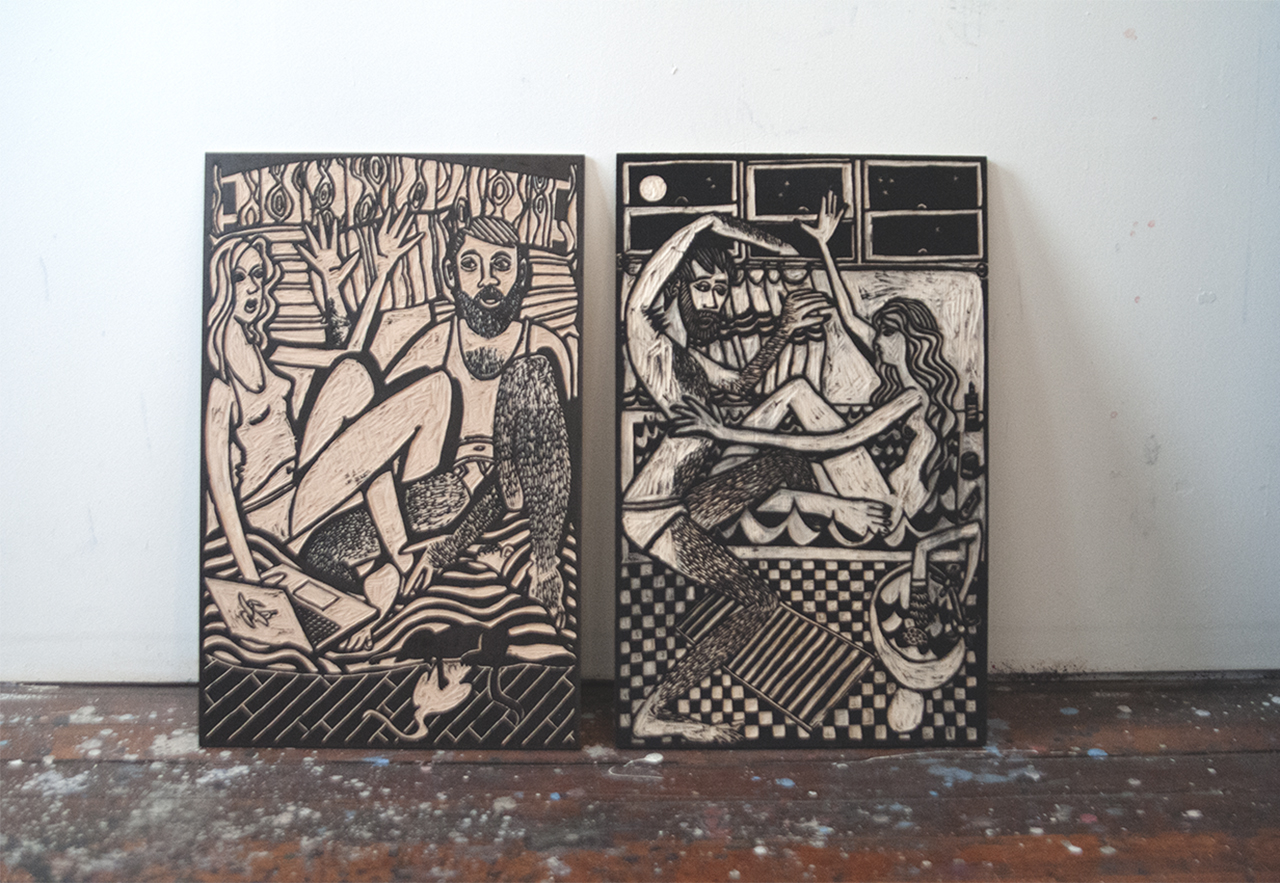