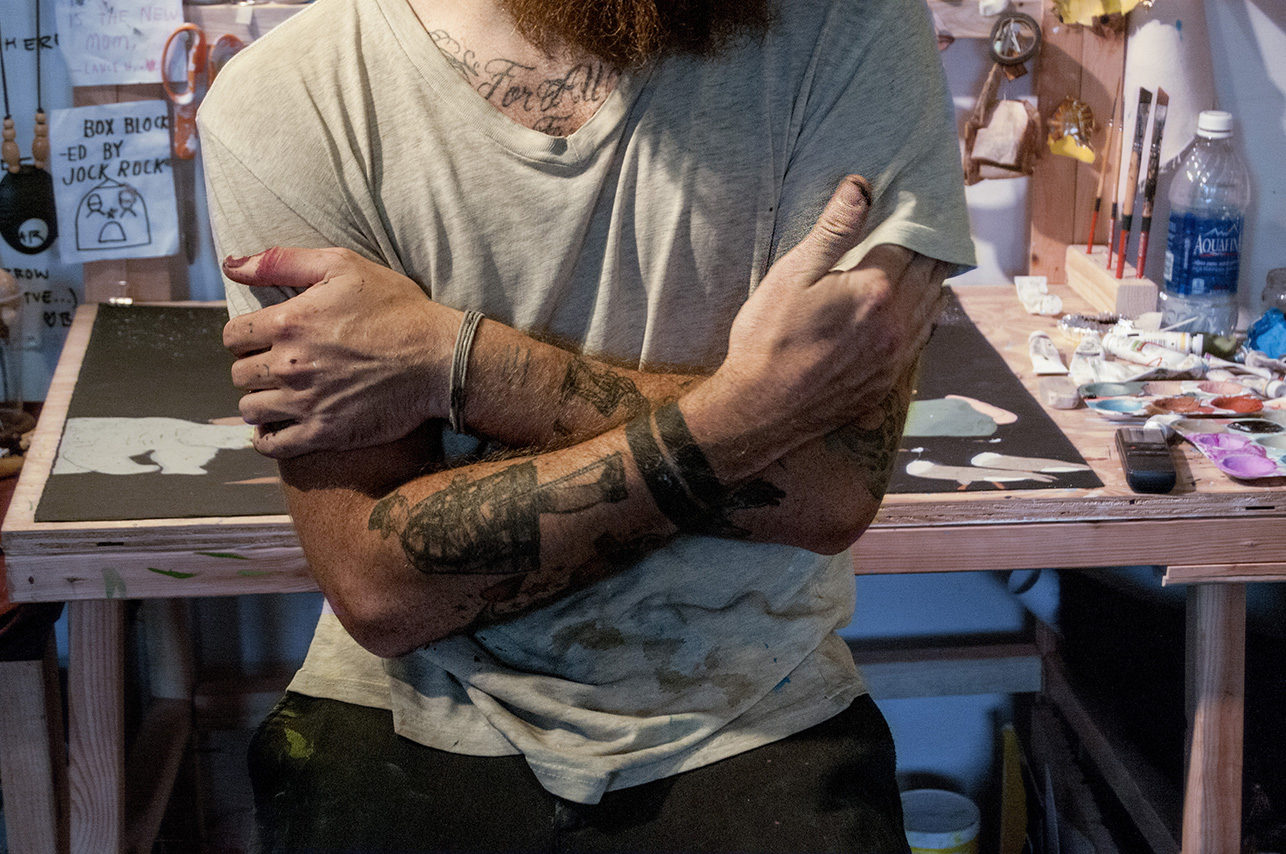 Charlie pulls inspiration for his work from childhood pow wows, societal rituals, and a lifetime of skateboarding. His delicately devised tribal universe can be found in his studio and gallery, The Peanut Gallery, in Humboldt Park.

I\W: What series are you working on right now?

CM: The Lost Tribes of Renni, the ones that are up right now at Peanut Gallery.

What was your inspiration for the series?

I was making tribal guys before, but they were more like one-liners with no detail. There was no story or anything. I just started making a story, and they started developing out of that. I like the idea of creating an entire place. It’s a place I want to be, so I just think of all the things I wish were possible in that environment.

What sort of narrative did you develop?

It’s based off of a lot of Eastern philosophy as well as Amazon and Native American tribes. I went to India a couple of years ago, and when I came back I started making these tribe paintings. It’s just slowly been evolving and developing into what it is now. From a joke piece, to now creating an entire world with alphabets, their own myths, and their own gods—back stories to each thing that is going on. I feel like we have a deep connection with tribal roots, ceremonies, and rituals but we don’t think we do—or we think we’ve lost it. But you look around and it’s still super evident… just in different layered ways. 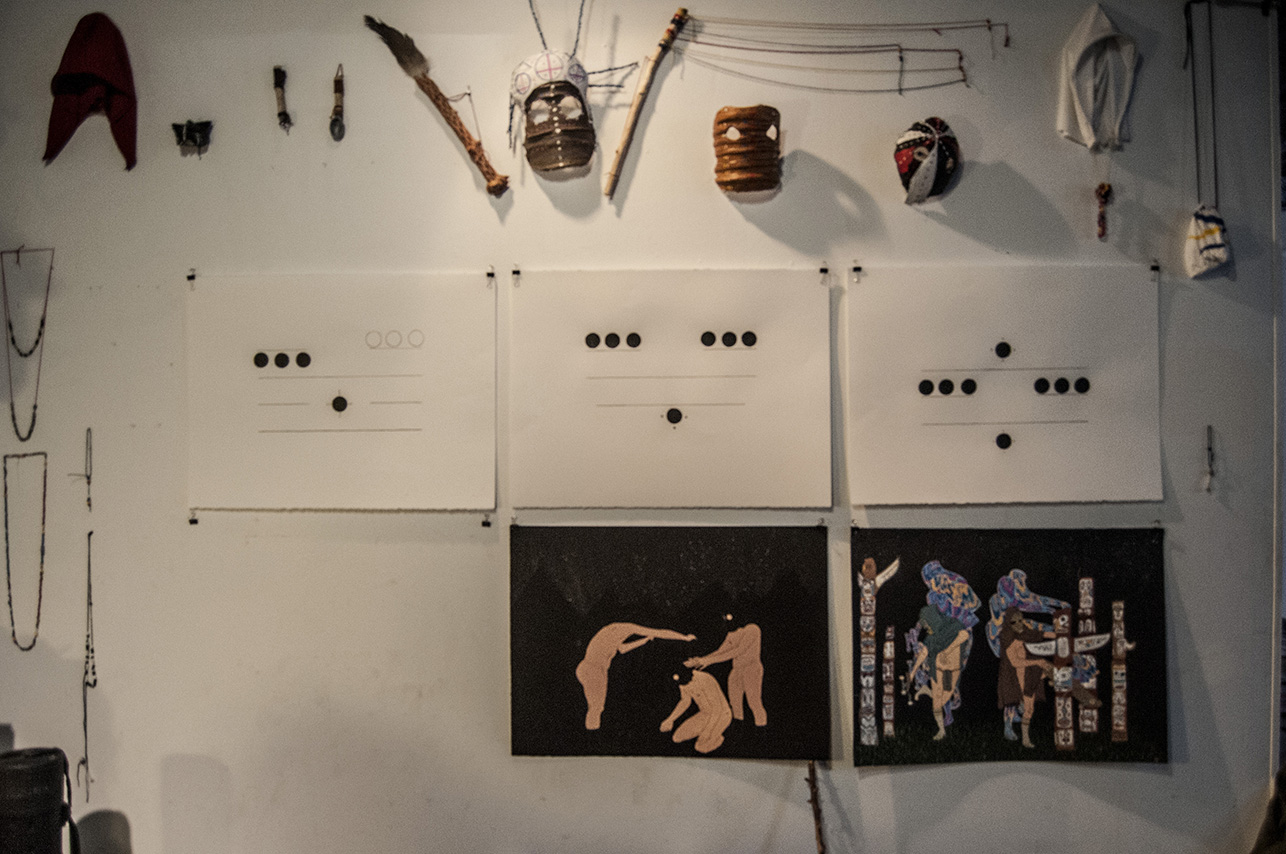 Where are you able to see these roots in modern society?

The way that people are always in their own sets or groups. Even for music and bands it seems like people congregate. There are other people that they are friends with, but it’s kind of knit groups of people. I see ceremonial stuff, like putting on make up, the way you dress, even if you’re not thinking about it—it’s still some weird ritual.

What kind of universe are your tribes existing in?

It’s interdimensional. There is a lot that references to stuff on earth, but it’s kind of its own spiritual realm.

What materials do you use? 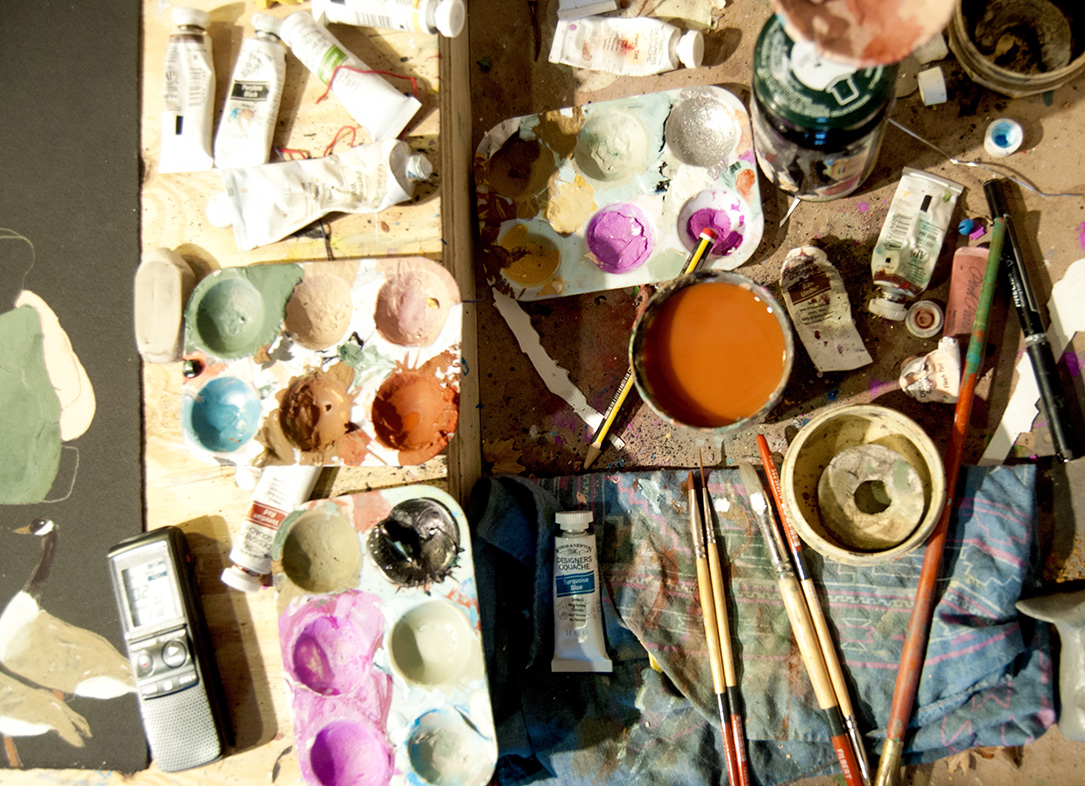 Which aspect of India inspired you to come back and work on the tribe paintings?

The experience itself. It is a 180-degree difference than what it is here. I had always felt a connection to how spiritual it is out there, and the connections that they still have with that. I think going there and seeing people living like that just hit something with me.

Can you explain to me your childhood involving the Native America culture?

I was born in Arizona and my parent’s are kind of ex-hippies. They have always been into, my mom especially, Buddhism and Native American culture. I was always going to pow wows, seeing the reservations, and doing stuff like that with them. I am always interested in the connection that tribes have with their environment and the world.

I feel like we have a deep connection with tribal roots, ceremonies, and rituals but we don’t think we do—or we think we’ve lost it. But you look around and it’s still super evident… just in different layered ways.

Would you say that was an influence with the work that you are doing now?

Oh yeah definitely. That stuff is obvious to it. The native stuff definitely had an influence—growing up around them, their myths, and all the ceremonies and rituals. That’s always been something I’ve loved. 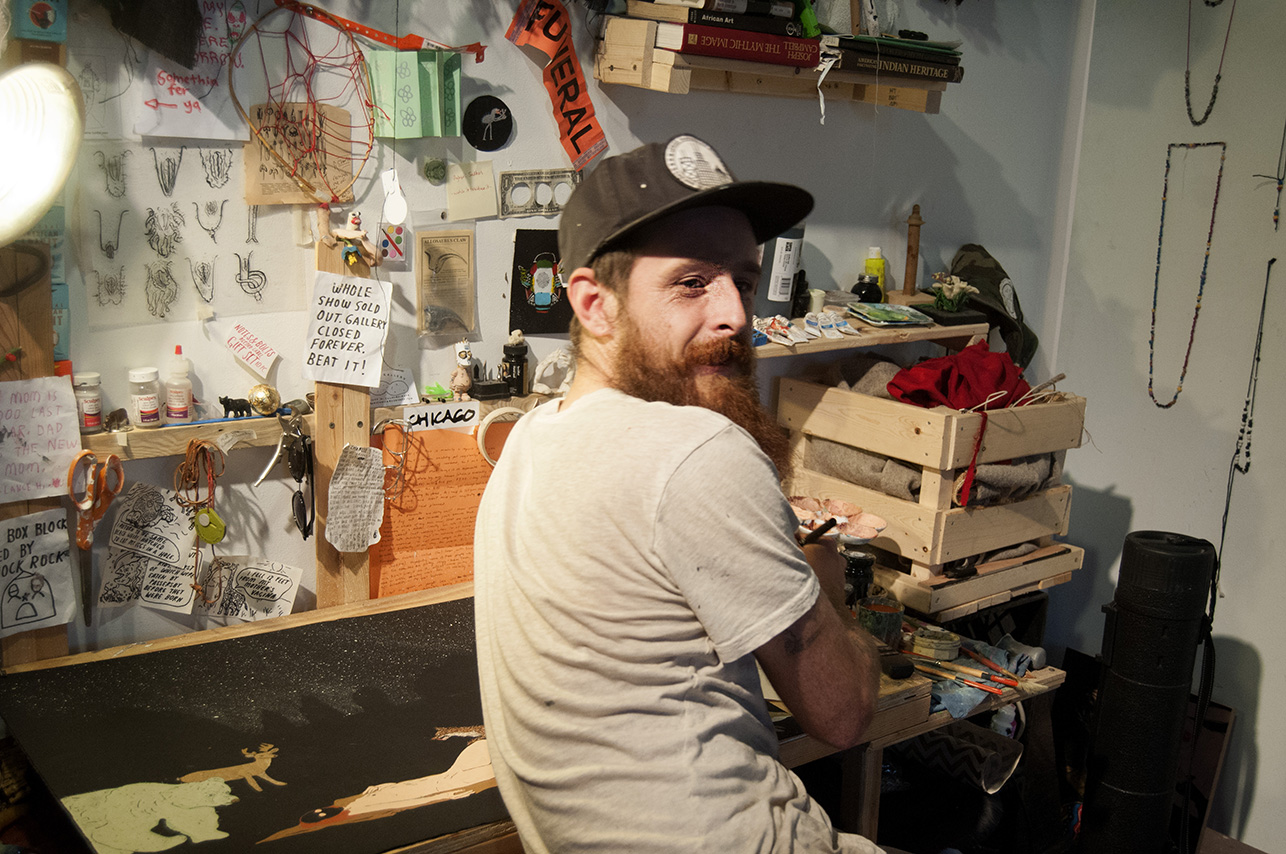 Why does most of your work have masked faces?

I don’t know yet. I started doing it because I was terrible at making faces. There will be face paint in some of the other ones that I am going to start doing, but I like the idea that there is always a mask. There is always a veil—there is always something to hide people. The faces are not important. It’s just the actions that are going on. There are a lot of teachings about the veil that’s covering all of us. I like that, and I think that was part of it in the beginning—these masks. Sometimes their eyes, you can see things in them, which I like. I like that it’s only the eyes that you can see. 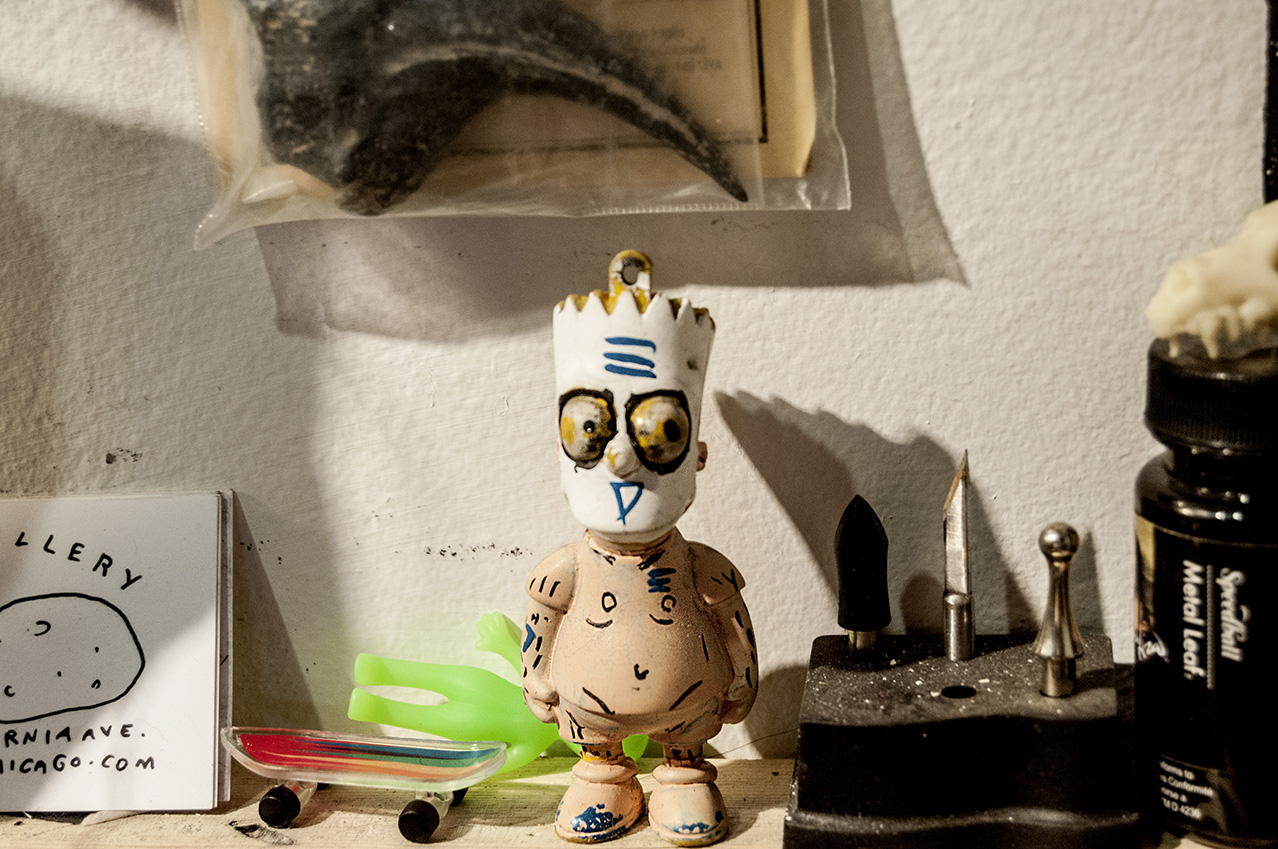 What does the motion symbolize in your art?

Constantly flowing, always moving. I just like movement, and I think that it is good to show. Being stagnant is probably a fear that I have or something, and I think that it is important in the paintings to make sure that there is action going on. The beads and the flare that dangle off of them is an easy way to mimic a motion that’s happening.

What type of music do you think your tribes are listening to?

It’s a lot of chant. Brandon Howe and I are starting to play music again to go along with the tribes. We’re going to go get some more instruments from Andy’s, some tribal acoustics, and we are probably going to decorate all of this stuff to have it fit in with the world.

Do you have any rituals that you preform yourself? Possibly in association with making your art?

Oh yeah, each day I come in here. In the summer it’s not as much, but in the winter when I’m spending much more time in here I come in, take off my shoes, light some incense, fill up my water, straighten up certain stuff. There is probably other stuff that I don’t even notice. I have to have stuff in certain spots. 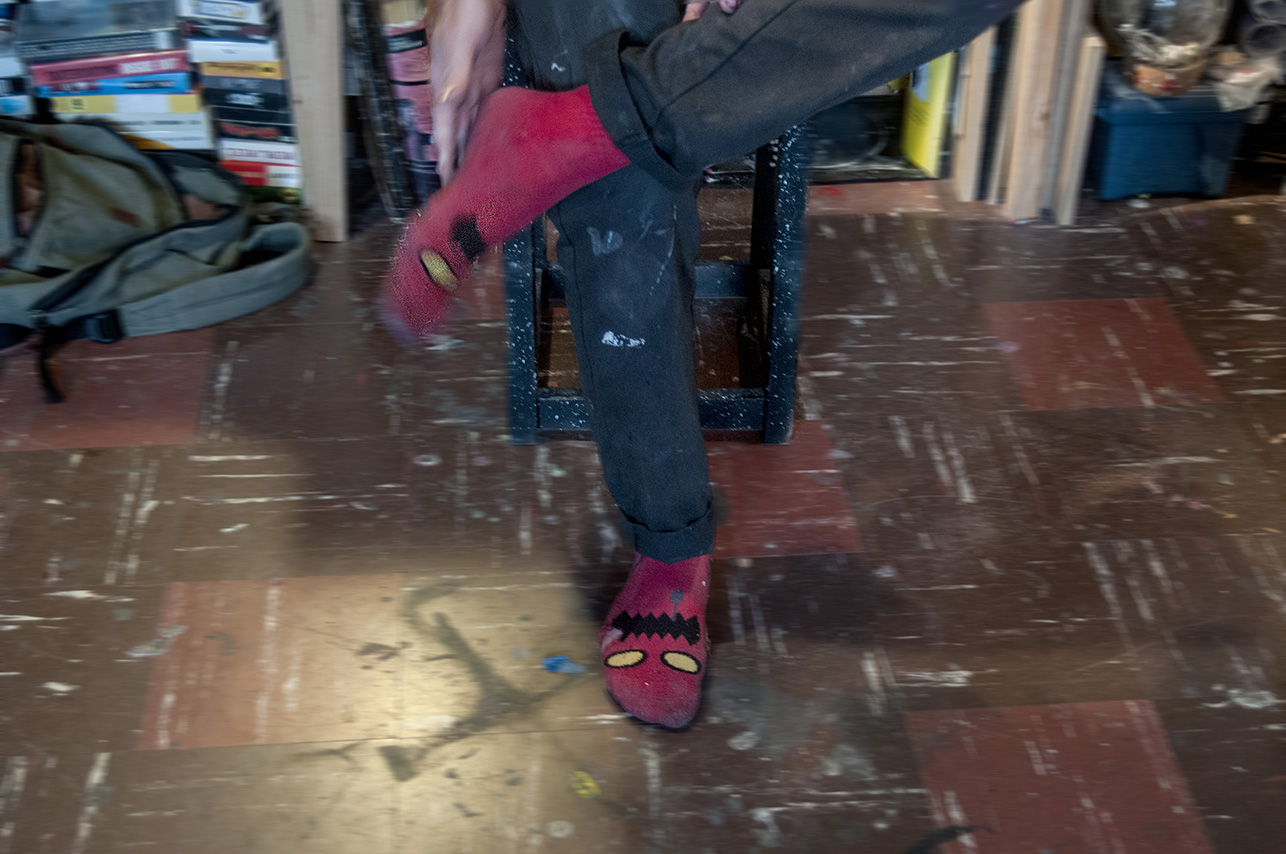 Where have you pulled your greatest inspiration from?

Actually for me it is pretty easy—skateboarding. It’s a way to look at everything differently. As a skateboarder you look at things that people use on a daily basis and you think of it totally differently than how the rest of the world does. ‘What things can I create off of these manmade objects?’ The drive I have now is definitely from skating when I was younger. It just switched for me. The passion that I had for that as I got older and had some injuries…all my energy went into art. There are a lot of pro skateboarders that are becoming world famous artists. It encompasses fashion, music, art and performance art all in one thing. Growing up doing that, being around it, I think has been what has inspired me. That and going to India are the two.

We also want to know about your vagina drawings. Are you just really connected to the birth canal?

Those started as I was sitting in Midway Airport one day. I was just drawing people’s vaginas. They were on a little piece of paper. I think there is just way too much dick art out there. I don’t want to say that it’s overdone, but it kinda is. It’s boring now, so I just wanted to push it a little bit. Especially when I started printing the shirts, it was all girls that wanted them. I got decent responses. I didn’t get anyone that was pissed. They are just fun, and then I kept doing them. 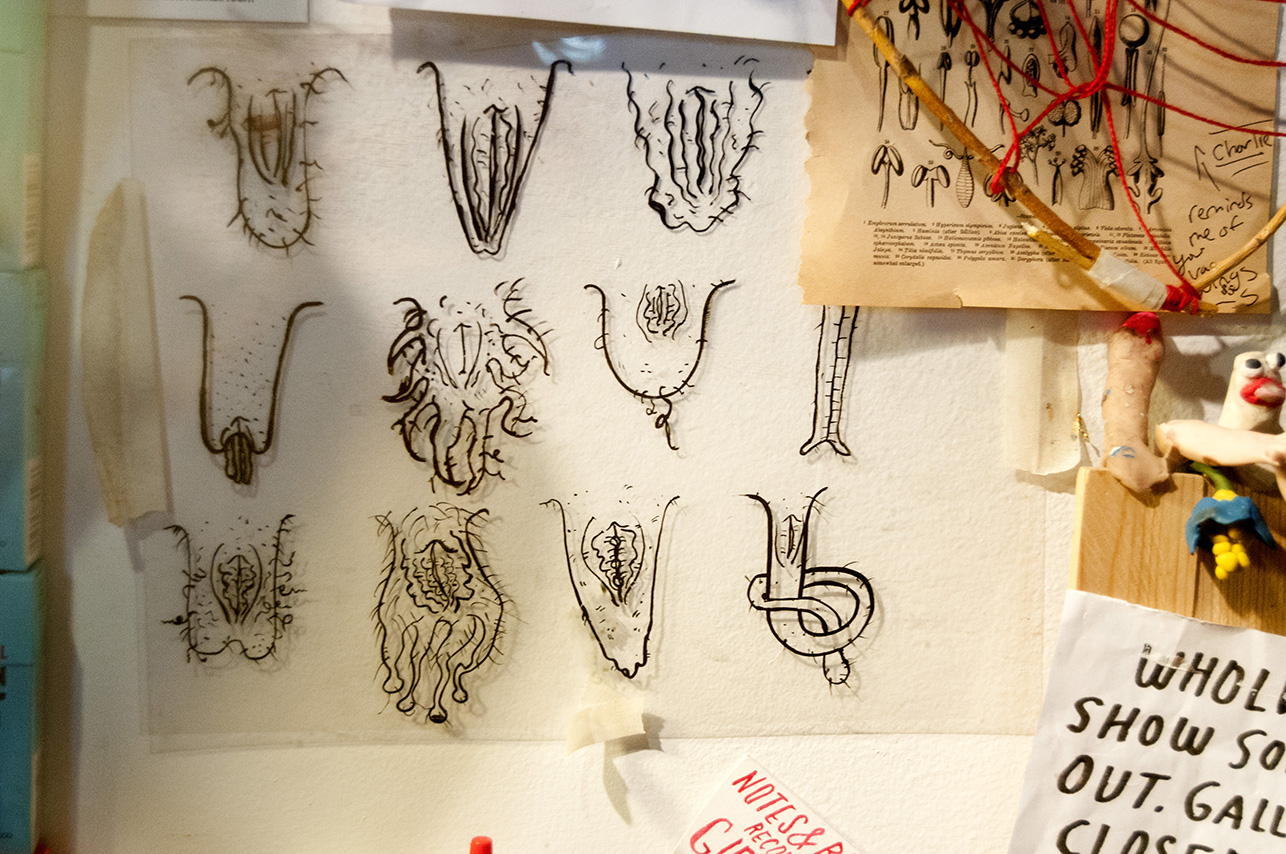 Why did you decide to name your gallery the Peanut Gallery?

It’s a funny story. At first we were in a space that had a room number of ‘345’ and we called it ‘345 Gallery’ thinking we would change it sometime. We were having a conversation and my friend Kelly said that Lone Star Steakhouses were really classy. And I was said that they were not—there are peanut shells all over the ground. We were going off on her about it, then we said that we should fill our gallery with peanut shells all over the ground, have a bar at the end, and have no peanuts for anyone to have. We were just joking around, and looked and no one had the name. It makes sense because we are a goofier gallery. It fit really well with our personalities, the idea of the space and our idea of art in general. It worked well. We like to think that we are kind of a nobrow space.