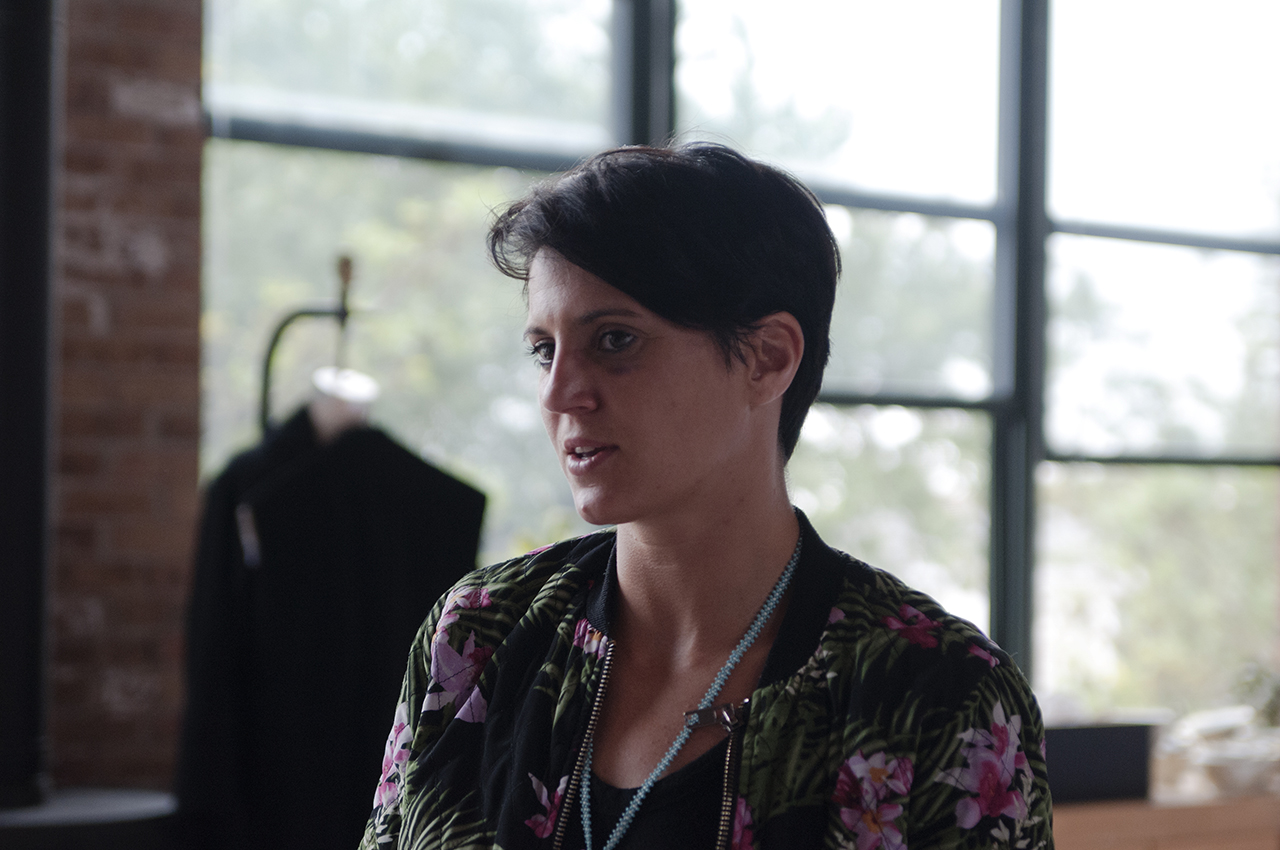 Located on the first floor of her Logan Square loft, Cheryl’s studio exists in a state of organized chaos, mannequins standing erect amongst piles of collected china tableware. With a background in fashion and boxing, Cheryl’s performance, projects, and sculptures speak to the combined history of an object or movement, excavating memory from sculptural objects and her own muscles. Recently Cheryl has begun to work with local youth, encouraging them to express their own histories through both poetry and spoken word.

I\W: Does your work always stem from the body?

CP: Yes, everything starts from the body for me. It starts with identity. I used to always think of fashion as an excuse for me to not position myself in sculpture or performance. By studying fashion I was still with the body, I was still with material and identity, but it allowed me to traverse through those other disciplines more easily and no one had a problem with it. I am always thinking of the user relationship—whether the user is the viewer, or whether I am the user as a performer. What is the function of it and how is it functioning? How is that changing over time? I think having that design background helps me ask those types of questions. I am seeing that relationship and those conversations that don’t necessarily happen in other disciplines.

Do you feel that your sculptures have an aspect of performance as well?
I think they have a built-in design element. I either take an object and dematerialize it or shift the scale of it and through that bring in poetics. I take an existing framework and I remove one small thing and replace it. Each sculpture suggests the body, either in the potential of movement, activation, use, or in the construction of it. There is always evidence of the physical relationship of the body to the object. 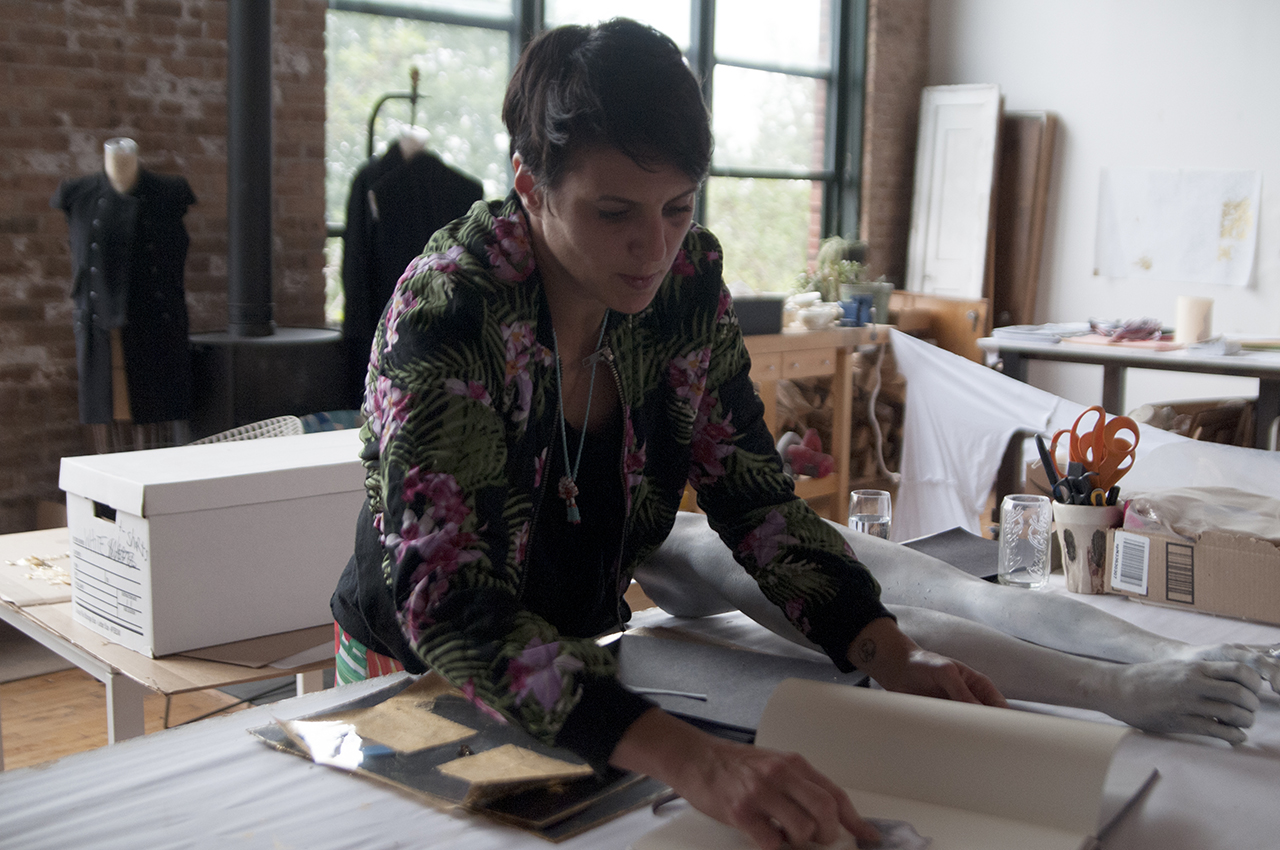 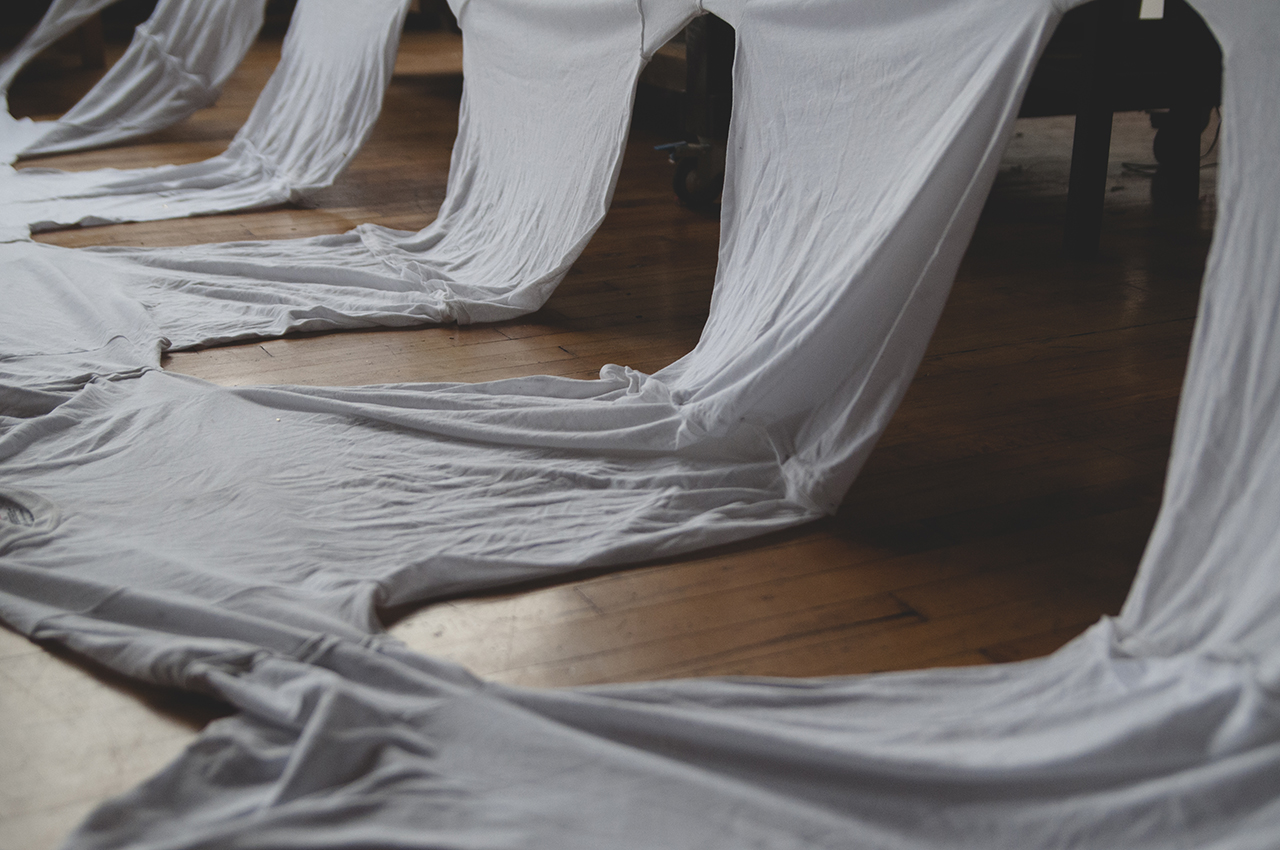 Why do you keep continue to come back to the use of china in your work like in your Urns and Tops series?
Material speaks. Part of the domestic environment when I was growing up was really minimal, but when the china was taken out it always carried this specific value. My family all changed or shifted or related to it in a different way. I remember running through the room and you would hear it rattle if you were too loud. It was even in a space that you couldn’t go into, and there was a fear built around that. I also just think it is a beautiful object. I don’t want it to break, but I like making the work so beautiful that the beauty becomes so intense that I feel compelled to break it. Beauty is really powerful, and juxtaposed with destruction it becomes really strong. For the Urns I am really interested in lineage and history and things passing. Even with my interest in boxing, it is only because of all my trainer’s fights, and because of his trainer’s fights before his that I am doing what I am now. With the china there are all of those memories built into it. It is an honorable moment that has been handed down to you in your family. I collect china on Craigslist, so I get to meet the people who sell it to me. The people feel obligated to tell me why they are getting rid of it. Most of the time it is death or divorce. 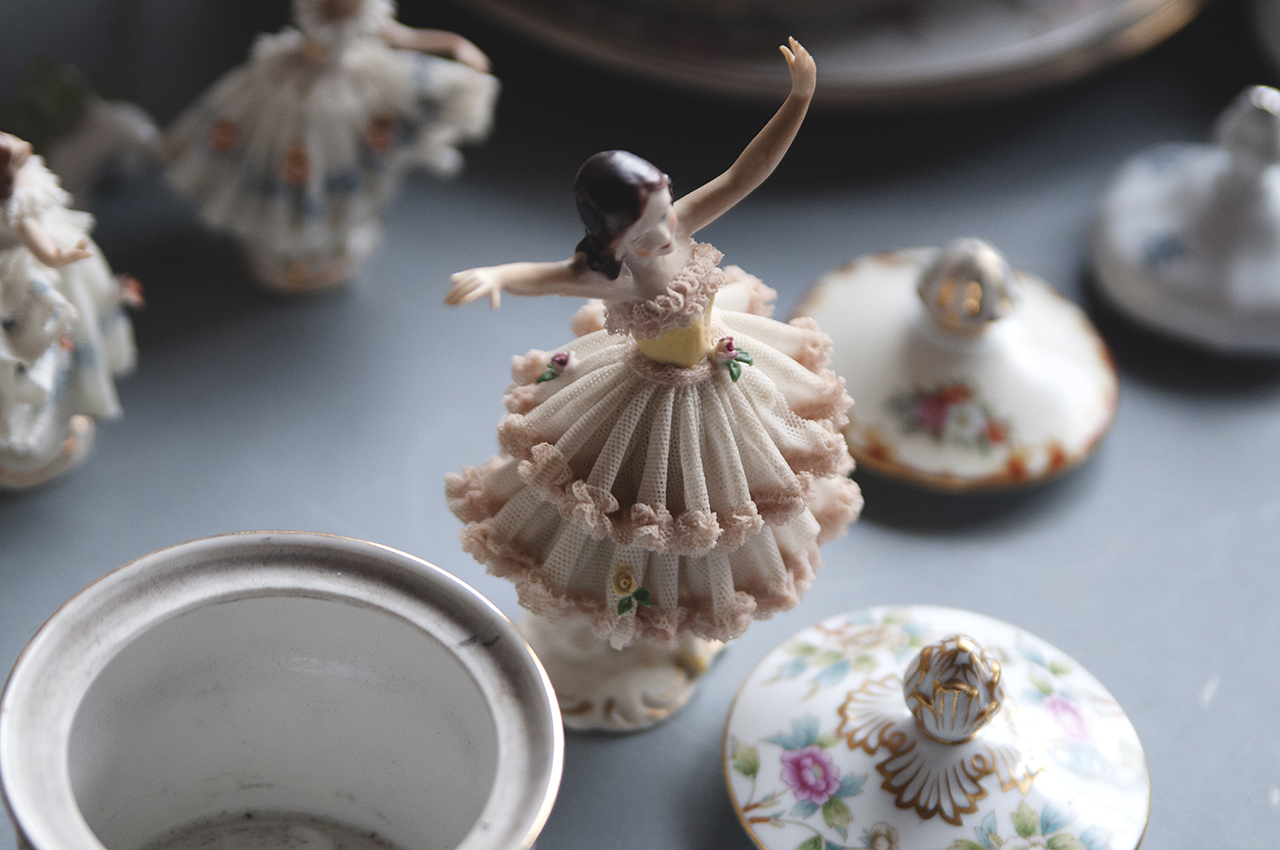 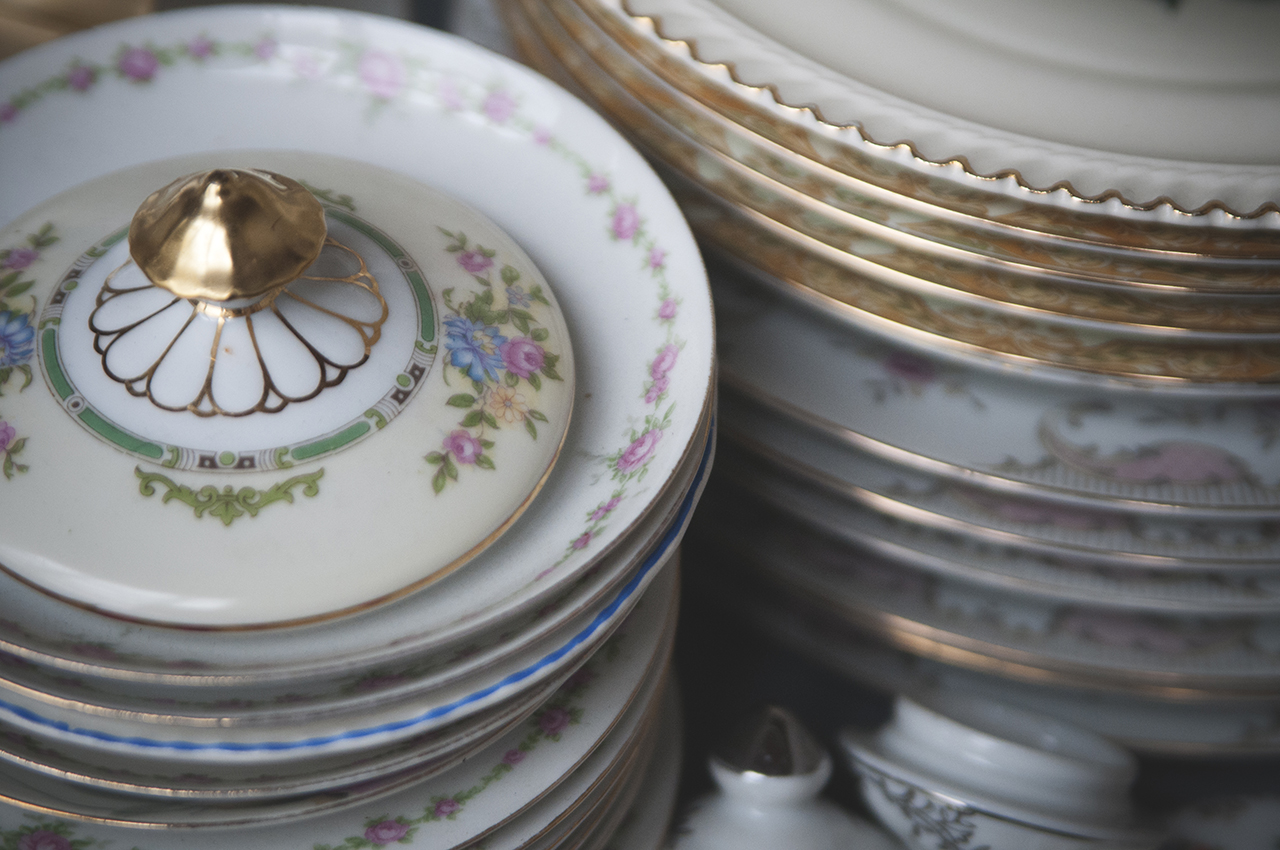 When did you start boxing and how do those concepts work their way into your art practice?
I started boxing three and a half years ago. I wanted to look at it in terms of research. I am really interested in physicality: the will, endurance, tolerance, also that taking and giving of something. When I am at a ring at my gym and sparring it is different than when I go into a competition. It is the same ring but something, that life of it, has changed. In Muay Thai there is a move called “The Clinch.” In this move, I would hold behind your neck and you would keep swimming and moving as I have you by the neck. The first time I did it I could feel all of these stories leave my body. I think of how our muscle holds information and how our culture here in the West has become so dependent on language as a way to process our past. How do we start to understand how stories can be released through the body?

How did you transfer your interest in boxing to your project “Just Yell?”
When I was at Louder than Bomb this year the first youth who came out was incredible. Everyone was dead silent and it felt like he was defending himself and was also defending a community. Poetry to me is design—it is language sculpted, whether the way it sits on the page or it becomes stacked when I speak it. The language he was using was puncturing holes at the same time as it was holding up walls. It was both defending the body and filled with hope and I think there is something in respect and self worth and that connected me to the boxing. Boxing is a space in which we know the rules. It is a space to fight for respect, but there is also an agreement between the two where those sides become negotiated out through the body. That became this framework to contextualize that young person in that arena as a safe space. That context can allow us through that hope of their poetics to grapple with what they are saying, and our full bodies need that. 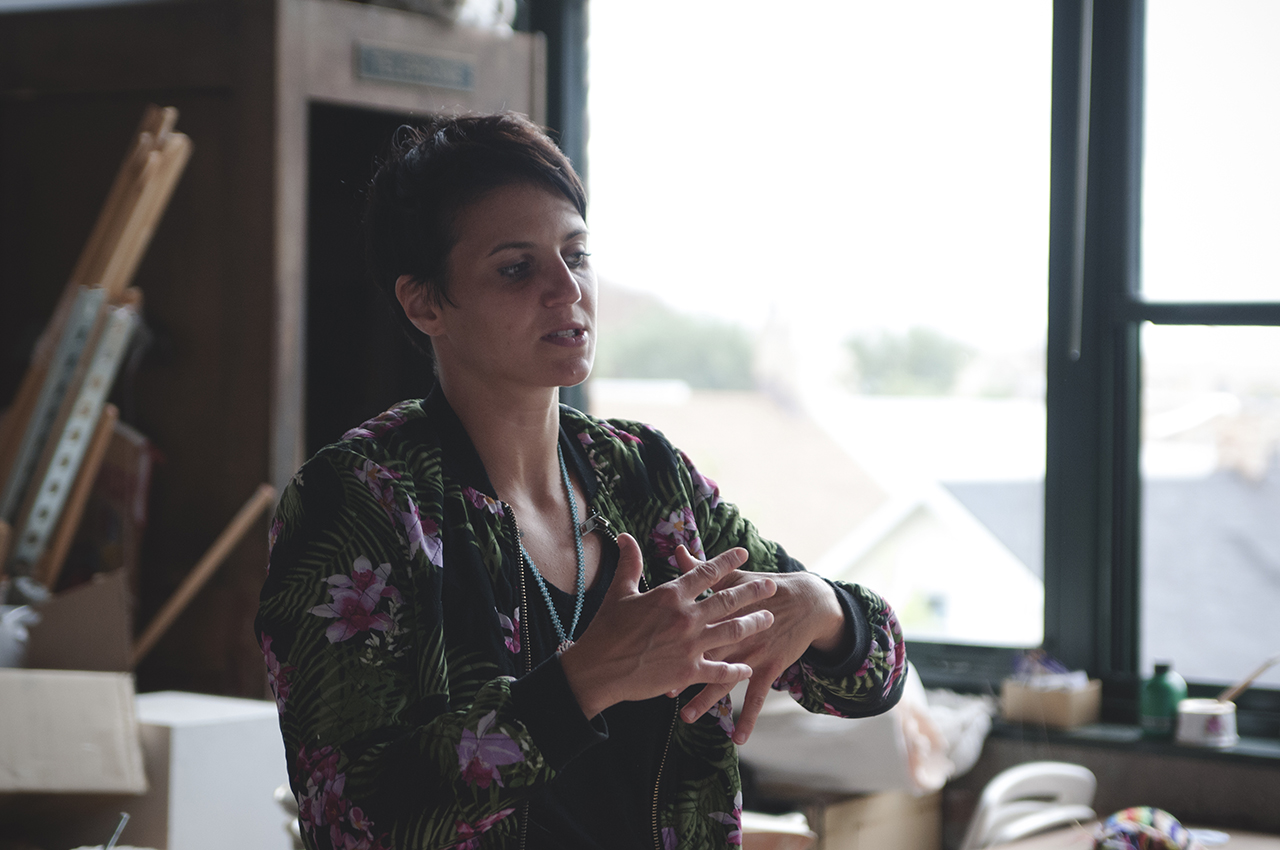 When did you start working with youth in Chicago?

I did the banner project first in fall 2010 to 2011. It was the first project I did with their text and then that evolved into a more formal framework for “Just Yell” in fall 2012 and spring 2013, and my opening for Monique Meloche was in Spring 2013. The series is called A SILENT I. 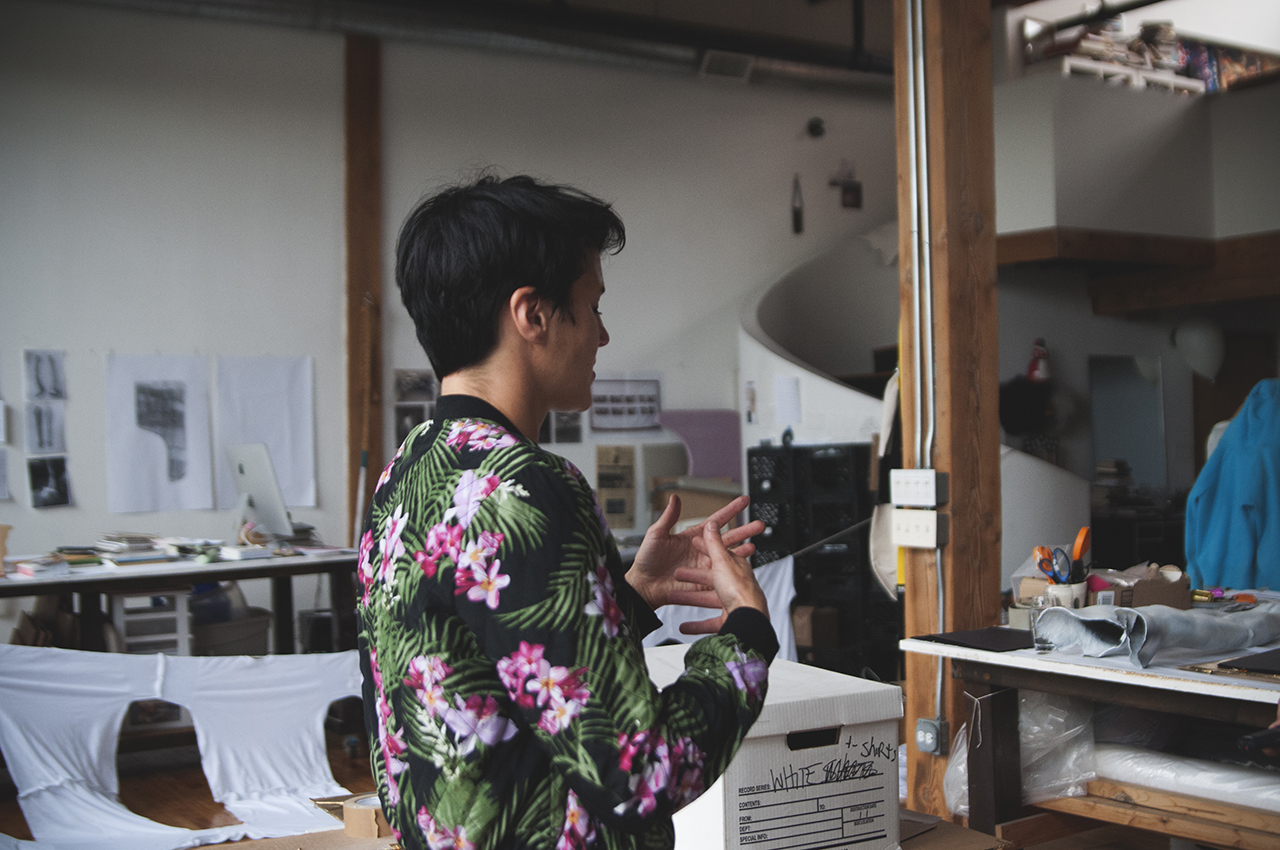 I invited the youth to tell me one truth and one lie about themselves and they did not need to tell me which was which. I then selected 20 and had them produced on championship style banners and installed these in the gymnasium at their school.

How does that context shift when you are working with the kids in the high school and then you bring that into the white-walled gallery space?
For me that decision happened for a few reasons. One was that I wanted to confront this primarily white, wealthy audience that is going to a gallery. I wanted to bring in those issues and to have those conversations. Some people thought it was too slick and sexy, but that is part of seducing them towards the project. One of my friends said that you need to lure them in with beauty, and then crack them with a punch. I wanted to have these objects that did want us to come to these conversations. At the same time there is also steps that have to be taken. By having that work in the gallery it is validated. So from that and having that opportunity to show that work and document it in that space and Monique supporting everything and doing programming, it had a public package that could be understood and experienced from other people. Now that project is able to move to these free institutions like the Cultural Center or the Poetry Foundation. I am able to introduce and make comfortable a tool in the city for young people like the library at the Poetry Foundation that is free and open to the public. The Cultural Center is now going to continue the open mic I started with my DCASE residency, from June -August 2015, which is going to live beyond the project and now they have that safe, free space to share their voice. They are both sites that people from different neighborhoods are going to. The decision to bring it to the gallery was a catalyst into these other venues and opportunities.

Poetry to me is design—it is language sculpted, whether the way it sits on the page or it becomes stacked when I speak it.

How did that project translate to the Poetry Foundation?
The Poetry Foundation was actually new for me to find. I proposed the idea of the exhibition and programming to them. I showed them the book that I had produced in collaboration with the young people and said I would love to establish a relationship with them. These young people need to know that this is here and that it is free and available, and they were really supportive of it. I used the language and aesthetic of athleticism for a lot of reasons and one of them is that being in the United States it is a comfort. We know how to read that language, we feel confident when we see it, so we know how to approach it. We are ready to take what has been shifted in it, because we have entered into it with confidence and trust. I wanted to bring that color and voice to that space, because the immediate read of The Poetry Foundation is ethereal, so I wanted to break that sense that we want to whisper as soon as we walk in. By using the all-American varsity aesthetic to contain poetry and have it installed at the Poetry Foundation it is positioning poetry alongside and with the conversation of sports, and our country’s values on sports. This intersection then takes the voices of these youth into the same arena as the athletes, which transforms poets into champions. 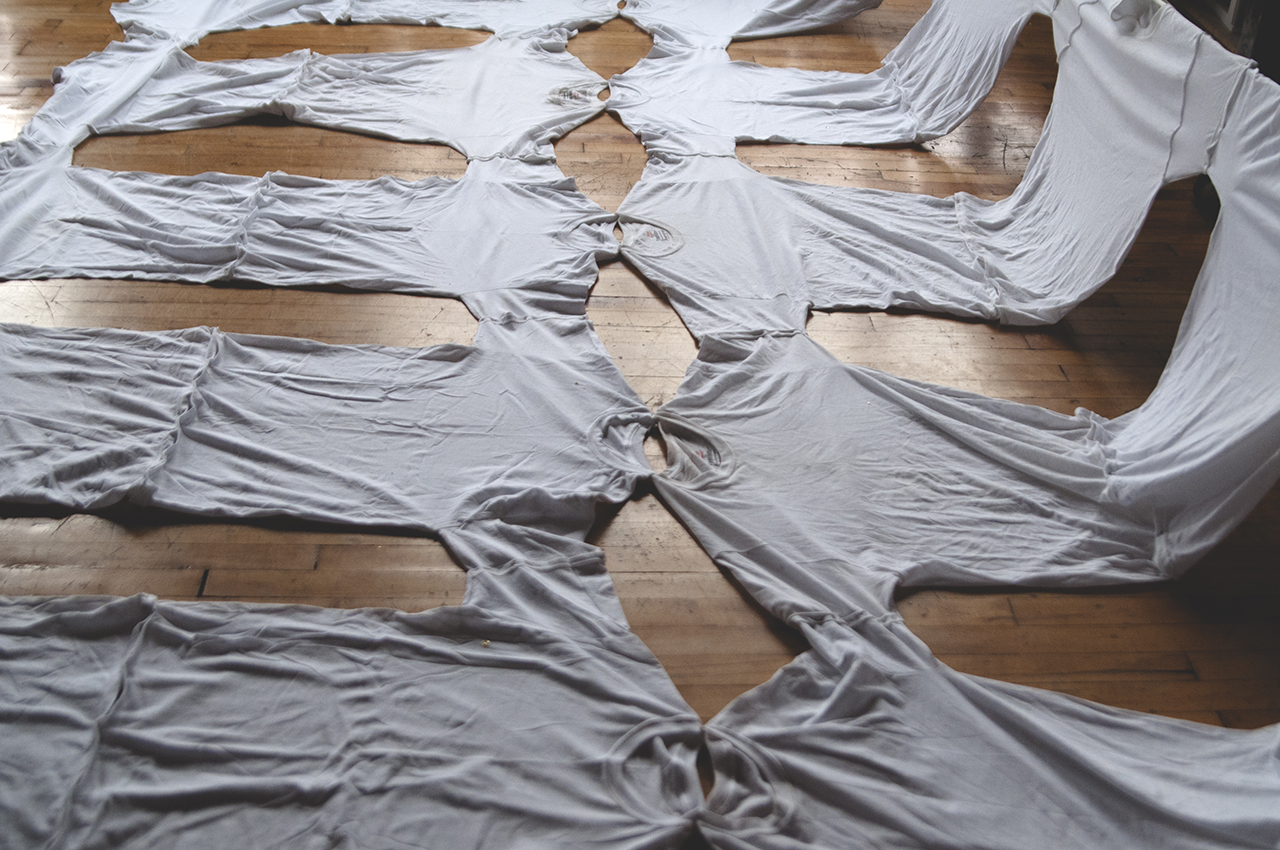