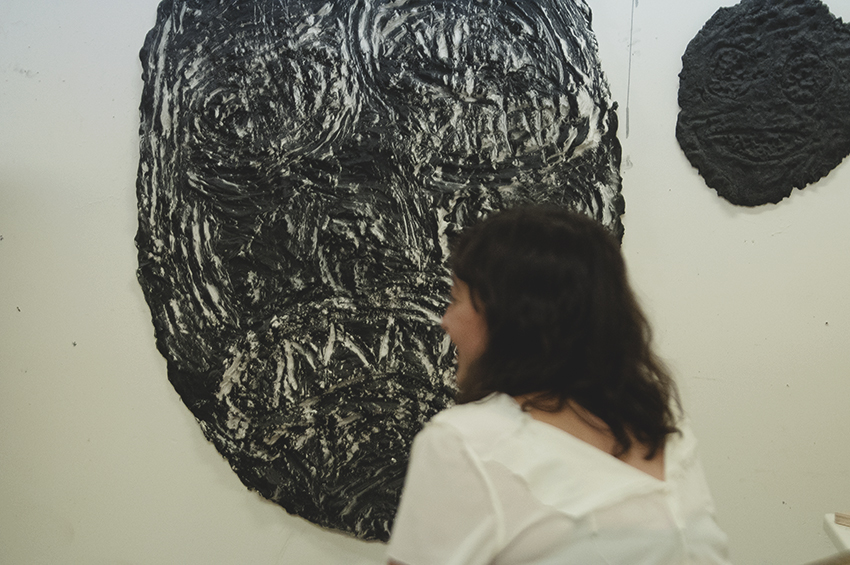 Chloe forms animals and other large-scale beings from concrete, sculptures that force her audience to either confront or avoid their presence. Typically these works are produced in the same texture or shade as an exhibition’s floor, an attempt keep the pieces consistent with their surroundings despite their unavoidable size. Recently Chloe has begun to translate her gestures in cement to those in rubber, producing cartoonish images that can be viewed as both humorous and aggressive.

I\W: You typically work quite large in your practice. Is this to properly amplify the gestures of your hand found in the work?
CS: Yeah, definitely. With my new body of work, these screen pieces, there is such little mark making involved that I think it is important to see every detail. I was having a discussion about scale recently and thinking about it is used as a way to manipulate where someone is in relationship to the work. It is a way to organize a viewer around it. I like the power of scale to force a sort of empathetic interaction with something, sort of like the opposite of modern architecture. I think that is an effective way of working for me still. I think I want to start putting my sculptures outside, or making them so they can exist in public spaces. I would like to make them permanent. Someone was saying the other day to me that making work in public is pretty selfish. But, making art in itself is kind of inherently self-centered. I think if the works were going to be outside, someone should be able to eat their lunch on them. Or really do whatever they want. 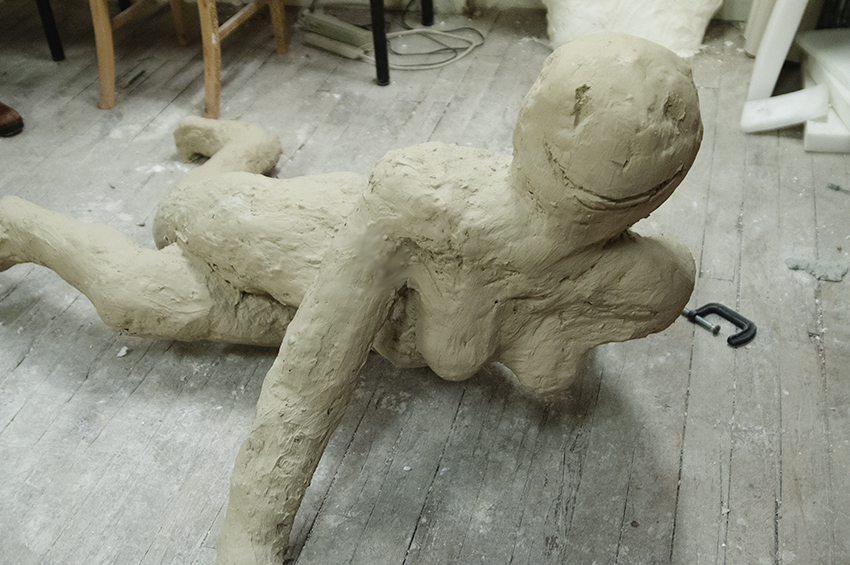 I\W: Is functionality something you are attempting to explore in any other areas of your practice?
I like thinking about functionality, not as something that has a purpose, but that can be purposed to do something. Like these screen works are repurposed welding screens, and they could also be used as room dividers or windows.

I\W: What place are the markings on the screens coming from? They look to me like demonic coyotes.
They are actually boobies. It is a motif I have been working with for a couple of years. I was trying to figure out the best way to make that mark, and just repeated that face a lot. I have this drawing I did in 2007 that I copied from a porno I saw, which is this woman with these giant boobs. It has just resonated with me for whatever reason. I like the idea of female genitalia becoming humorous or aggressive. It is what it is. And that is something I feel like I can’t get away from in my work. It is what it is no matter what. 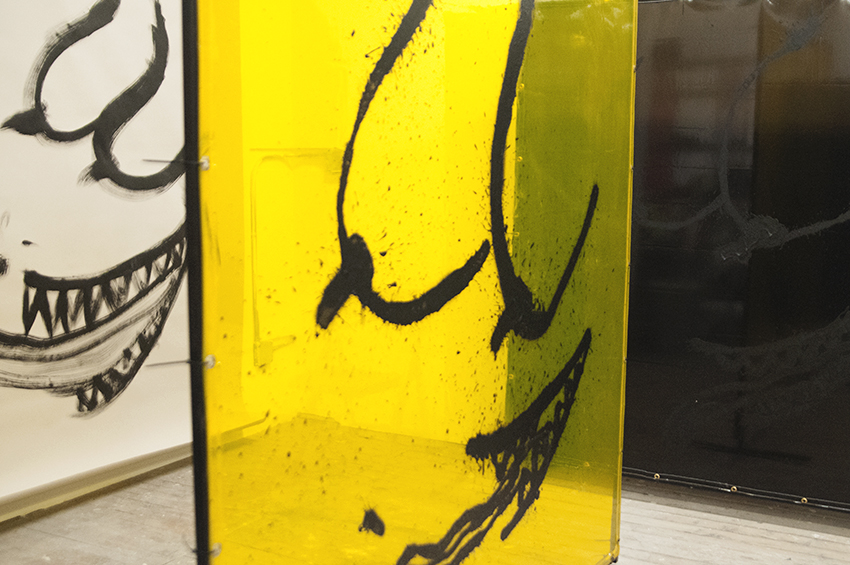 I\W: Some of your works, like your Concrete Expression series, very directly reference emotion. Are you channeling the emotions you feel while you are making these works, and others?
I think inherently it’s going to happen whether I know it or not. They are all kind of self portraits. It took me awhile to become comfortable with saying that. I think everything you do is a self portrait in a way. It is so common for artists to be able to intellectualize their peers’ work, but then when it comes to their own it is very difficult, at least for me. And maybe that is a place my practice comes from too, is a reluctance for explanation. I am making something that doesn’t need to be explained, or something like that. 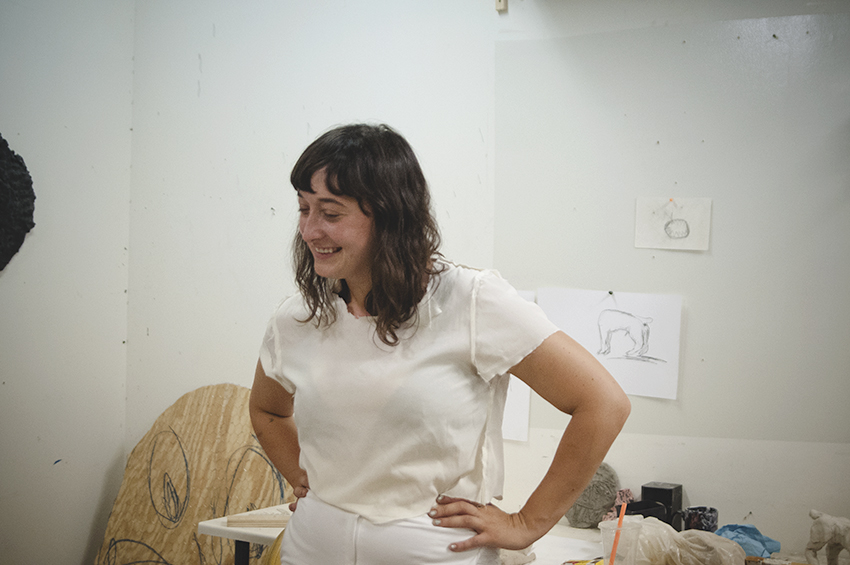 I\W: Do these markings on the screens require a faster gesture than those you make with your cement pieces?
They do actually. They are so big that they need it. It is crazy how fast the rubber dries, but it is good. I try not to discard many things I make because it is a big commitment to work large, so with the screens you just have to accept what comes out.

I\W: How is it moving from working in cement and plaster, where there is this fight back against every gesture, to working on these screen where there is a much more fluid motion?
It is stressful because there is a lot less room for error. When you make a big clunky sculpture, there is so much more room to mess around with it. With these however, there is no room for error because there can’t really be an error. I am not really a painter so it is difficult to make a painting because there is this mark, the mark is there, and then that is it. I don’t know if they are paintings, I guess they are paintings. It is quite stressful I think.

I\W: You recently made a work for Atlanta Contemporary where you banged the word “Welcome” into one of the walls of the museum. Do you view this piece as intimidating?
No. I noticed a lot of visitors were amused by it and surprised. It is this aggressive thing, but it says “Welcome” in a way that is physically punctured into this white gallery wall. I don’t view it as some institutional critique thing. I think it is more of a welcoming gesture. Who wouldn’t want to see that? Who wouldn’t want to be welcomed into a space like that? I used regular hammers to make it, not sledgehammers, but we tried all sorts of different things. The walls were really, really thick. The best method for the work was just going after it with a regular hammer. It was a very good workout. 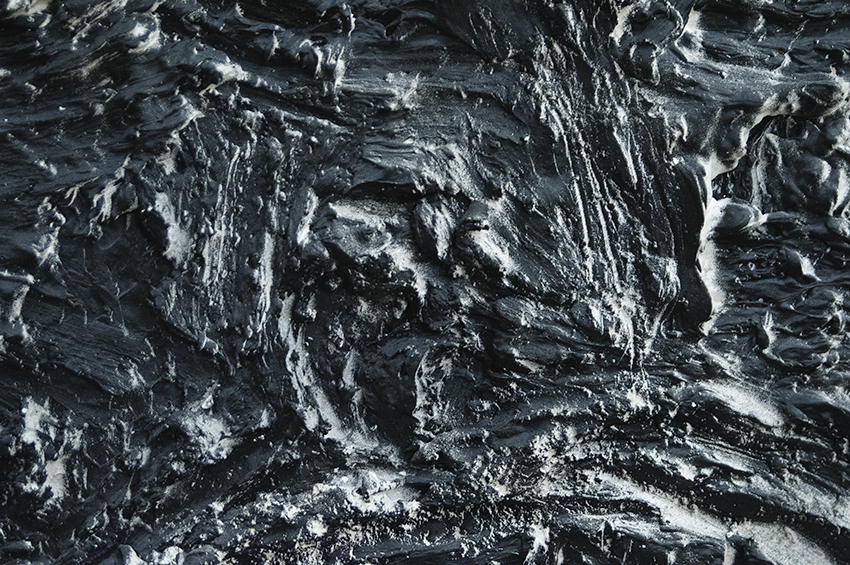 I\W: Why do you often make your sculptures to match the material or pattern of the floor of the space that they are displayed?
That is a pretty regular motif for me lately. I did that with this piece which was a big upside down fist. It was in this space called Mint in Columbus and then it was recently in a show at Night Gallery in LA. I had these pictures of the floor and matched whatever was on there and replicated the texture. I think it is a good solution for figuring out how to finish something, just practically. I never really want to use color superfluously. I don’t know how many connotations a color would have, so I think the best solution is to make it just the same as everything else. 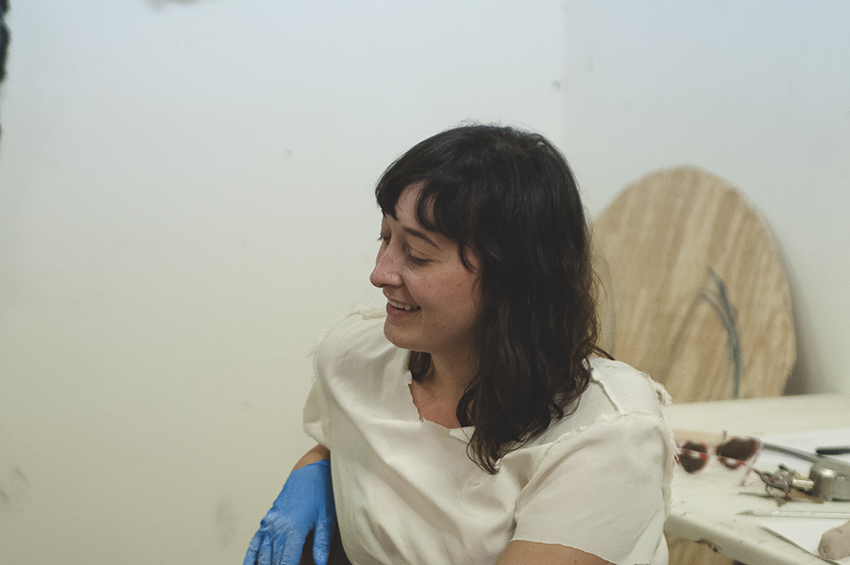 I\W: Is the decision also a way to draw more attention the shape of the sculpture?
Yes. I think it draws more attention to the figure itself. I think it is kind of poetic as well. I couldn’t tell you why, but I think it is. It can be really disorienting, but it can also be really consistent. They are these big clunky things that kind of disappear into the background at the same time. Often times I can’t articulate why I made a decision until a minute afterward. I feel like it is so much easier to talk about something I made five years ago. When it is so recent, when you are still getting it out and making it, it may be a finished work but it is still part of a larger body and it is still being flushed out. I know there is a reason why it is the way it is but I can’t quite articulate it just yet. Maybe that is why it is working, it is developing a good language. 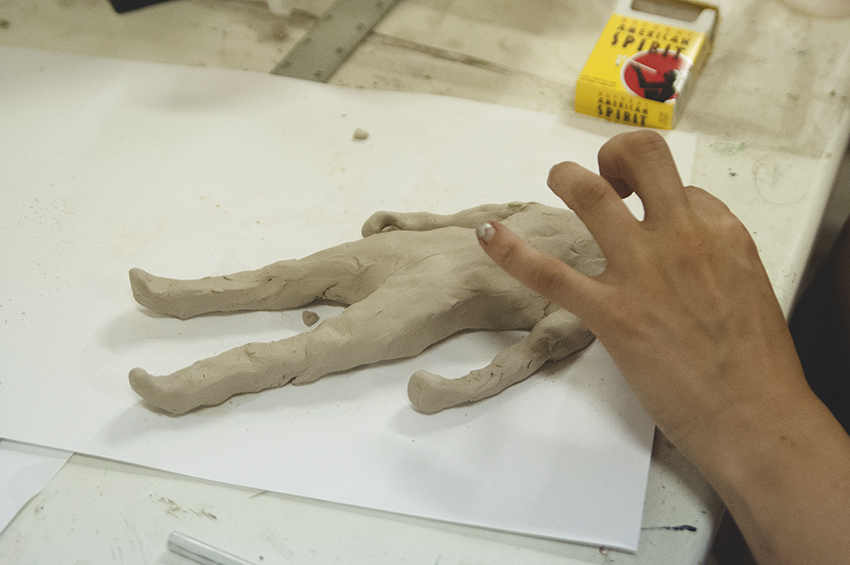 I\W: Where are the forms for your larger sculptures drawn from?
The first one was a replica that was made like 500 times the scale. I was making these replica of found sculptures or discarded sculptures and I decided that I didn’t really want to do that anymore. I did one in Toronto that came from a mixture from a figure sculpture that I saw in a junk shop and a nightmare. This woman I made references Christina’s World by Andrew Wyeth. You can’t see her face in the painting and I wanted her to have one in my sculpture. I don’t want the reference for this piece to be the most important part about it, however. 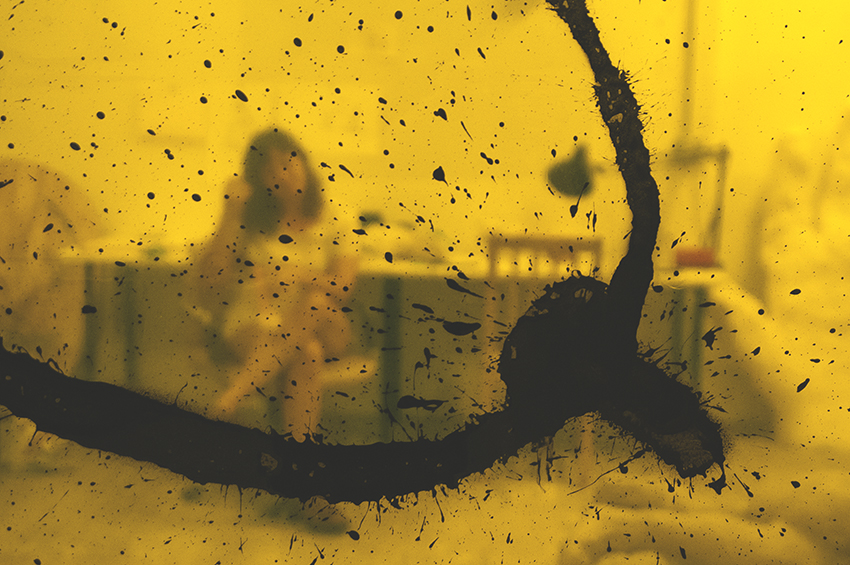 I\W: What is the process for titling your shows? The titles and press releases often seem like they are coming from a very quotidian place.
Yeah totally. Sometimes they are quotes. I had this show in Toronto last summer titled “Never Stop Following Your Fucking Dreams” which I got from this EDM festival with a friend that was a photographer. There was this DJ and he was djing for all of these 16-year-old kids on molly. And the DJ just said that like three times and the teenagers were all just face melting. I was so taken aback. I thought how awful and evil and manipulative. This is some guy who is twice their age and got lucky becoming a shitty EDM DJ. Often the titles are excerpts from life. The press release for that came from this really morose conversation I heard between these two women on the Ashland bus. One was talking about how she had to continue speaking to God because her brother was in recovery. You commonly overhear people talking on public transportation, but I heard it so soon after the weird EDM event that they two events happening so close to each other just made a lot of since at the time. It was a nice comparison to my own experience.