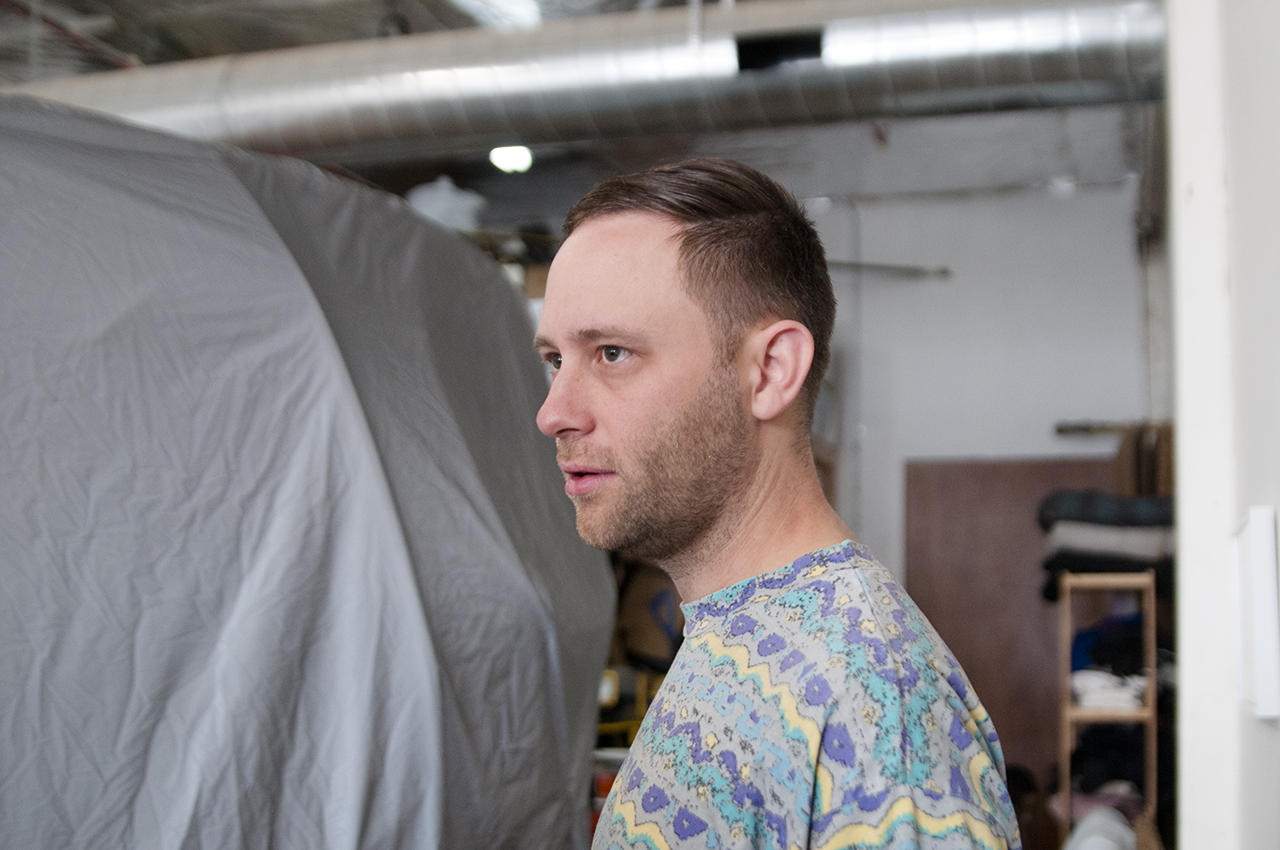 Chris’s studio is interrupted by a large reflective orb, a sculpture that exists as both present and absent. Absence is often an area of interest for Chris—mining images that have been purposefully deleted or encrypted. Through this digital ritual Chris explores the corruption and failures that surface through bringing back an image that has already been lost.

I\W: Can you talk about your inspiration and process of inserting your latest large sculpture, “Cataphote,” into different environments?
CM: This project started when I was living in Iceland and I started working with retroreflective fabric. I was thinking a lot about landscape when I was living in Iceland. People are really motivated to photograph the landscape there because it is amazing and beautiful, but I also found that it was problematic for me to fall into that trap completely. I feel like landscape photography is tainted by this history, especially in America, of Manifest Destiny and colonialism and thinking about how landscape photography made its way into some of those conversations. I am also thinking about the way tourists see the landscape versus how Icelanders see the landscape, and it is very different. I was working with this material and thinking a lot about scale because there are no trees in Iceland. It is weird because when you look out onto the landscape there is nothing to fix you or orient you with how big things really are. 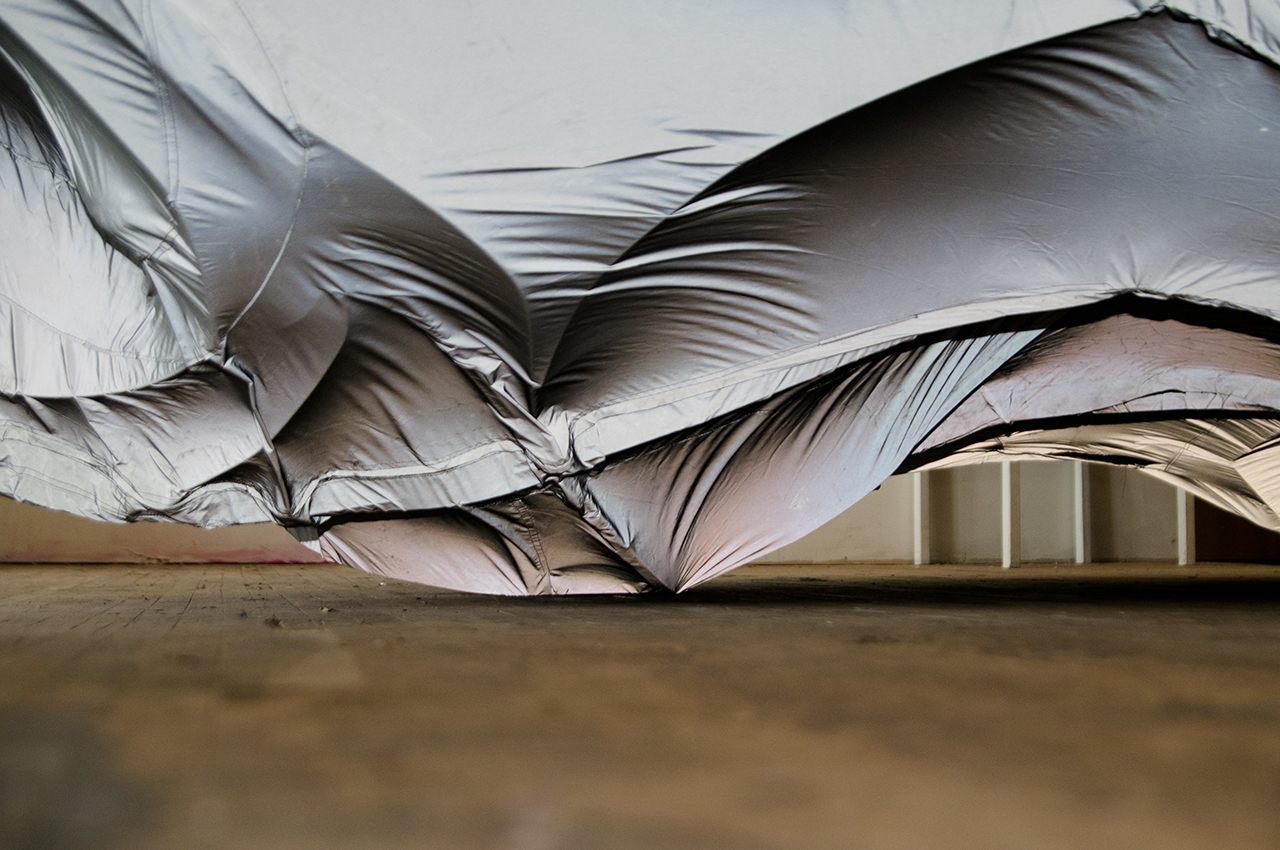 What inspired the shape of ‘Cataphote?”
When I was living there I heard about a dead whale that had washed up and I traveled to go see it. I was really struck by how present the creature was. It was the biggest thing I had ever seen. It was as long as my studio and just enormous. It was in the middle of nowhere so not a lot of people were going to see it, and I was thinking about how they are the biggest animals on the planet and no one ever sees them. There is this weird presence and absence shift, this volume that is present but it is also invisible. That led to “Cataphote,” which is the French word for reflector. I teamed up with an artist that I met at Skowhegan named May Wilson. She already worked within these forms, so we were able to get together and work on it and make something that is both present and absent and also think about how this material functions in a post-photographic space and possibly emulating something that is 3D-modeled or Photoshopped. I have been working with this material for a long time, but not at this scale. I knew I wanted to make something that would approximate the size of the whale and the experience of being around something like that. I am still thinking through this project and deciding whether it is something that should exist IRL as an installation, or if it is just the image of the thing that is more important, or both. 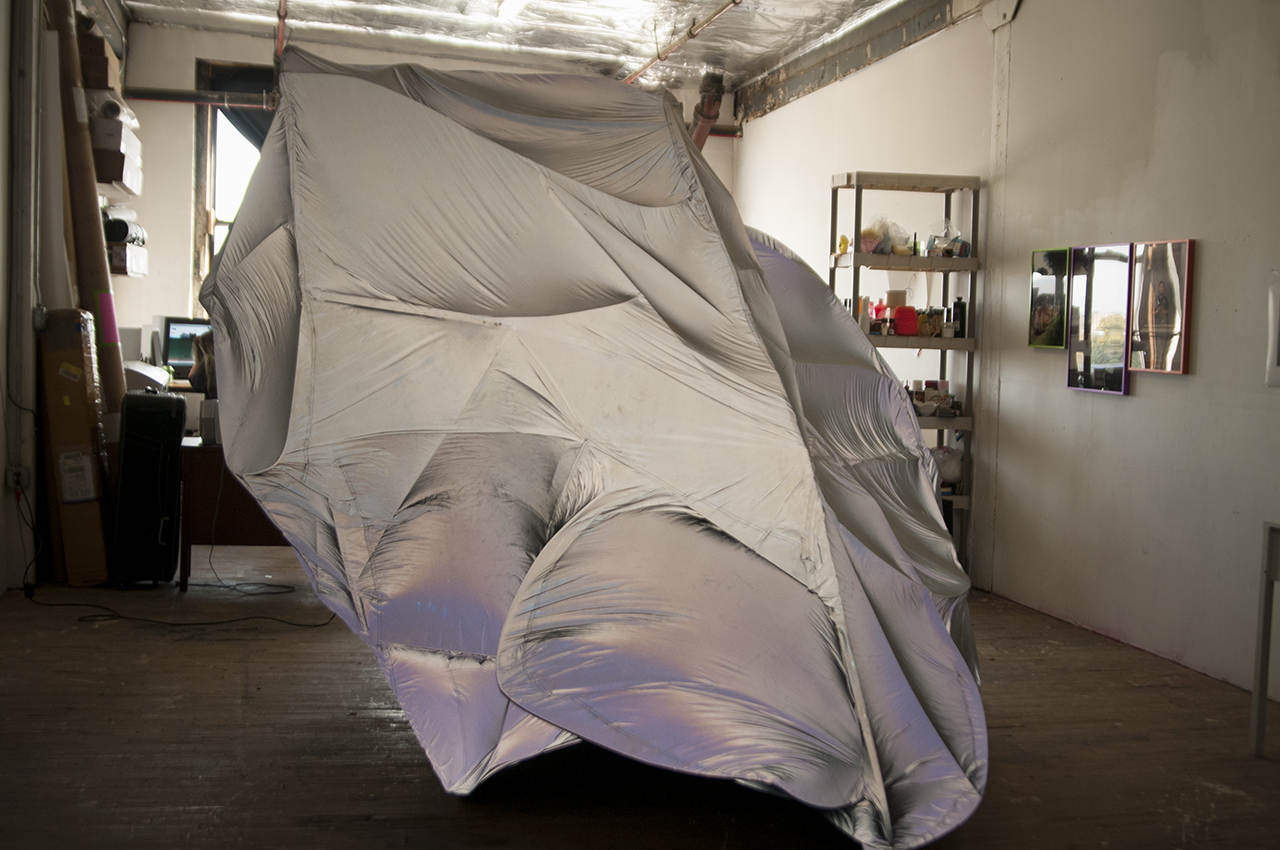 What is the inner structure of the sculpture?
It is basically like a big tent or one of those car covers, but made of welded steel round bar. I have been really obsessed with those for awhile. May and I were thinking a lot about spacecrafts, amoebas, and meteorites, and we had a Google Doc going, because she lives in San Francisco, with different kinds of shapes that we wanted to be inspired by. It breaks down to 16 pieces, but it still comes down to a pretty big pile. When I got it back to Chicago I had to create a labeling system for all of the inside parts.

What other projects were you inspired to pursue while abroad?
I did another project while I was living there where I hacked into the file server of the Icelandic National Road Commission called “Dark Data” and I pulled images from this web camera array that they have around the country. I was thinking about that as a way to access a landscape image that was not rendered through a Western point of view. The camera array totally fails however. It is dark half of the year and it is super cold and a lot of the images are just useless. I was really excited about that useless image. There is also a specific utility that series has which I think is closer to the way that Icelanders see the landscape. 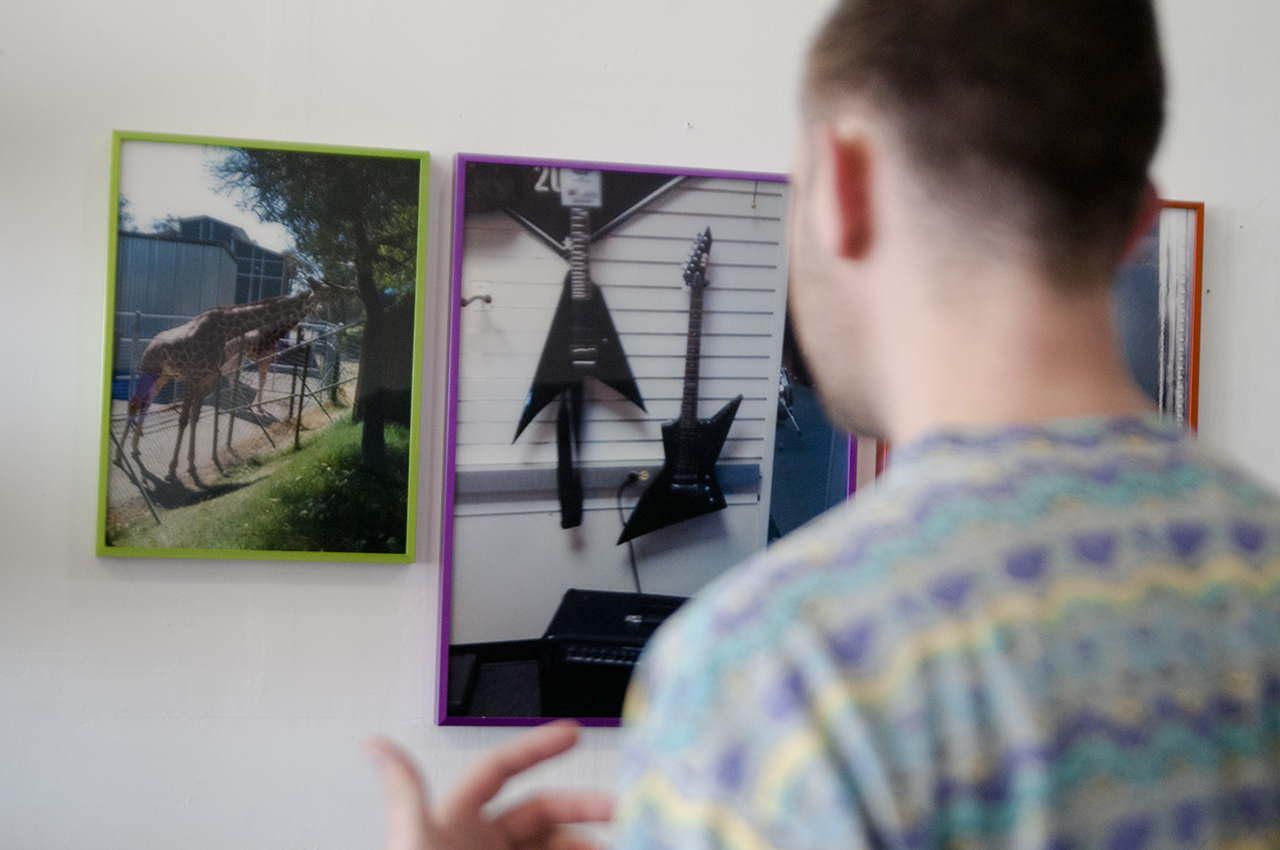 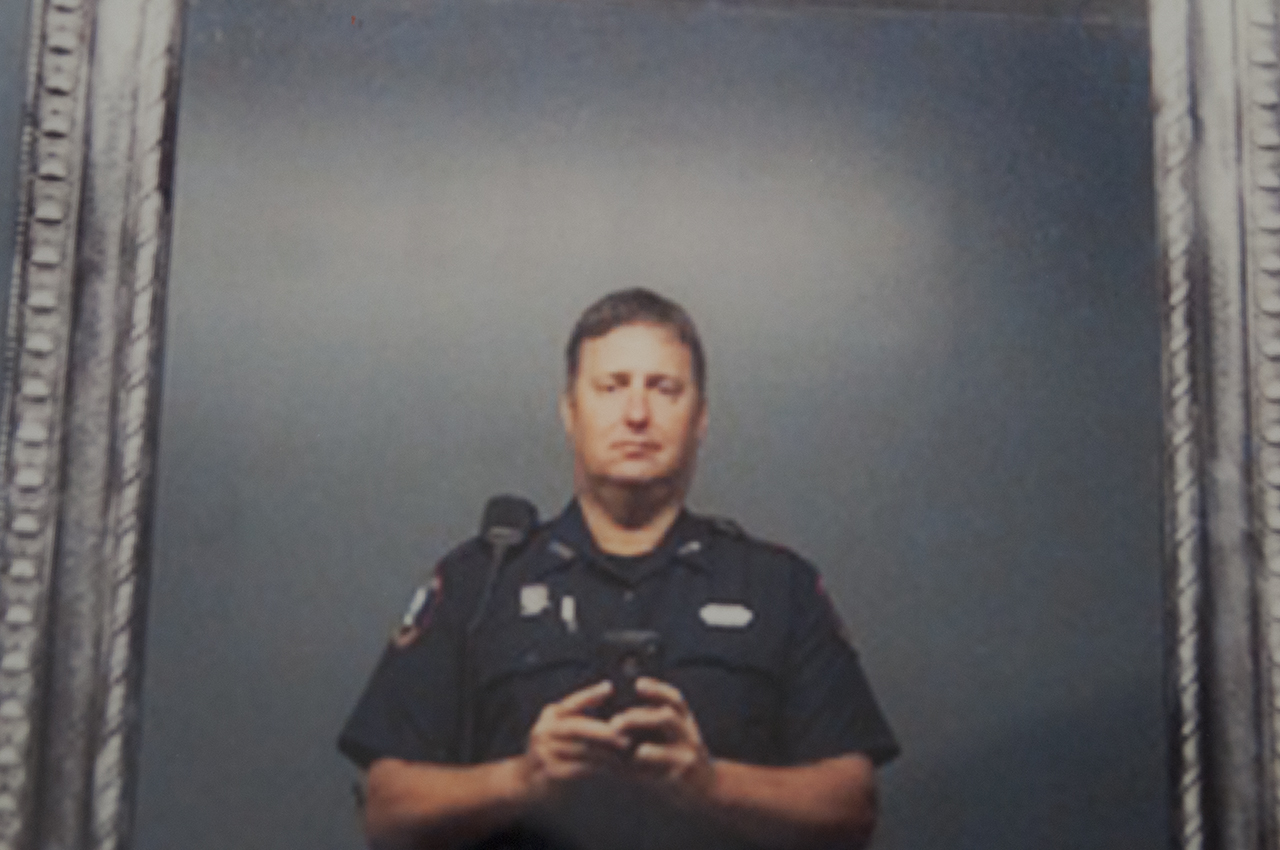 What about the subject matter of your show Brute-Force made you hang it in such an organized chaos?
I spent a lot of time figuring that out and wanted to do something that kind of worked with the randomness of the images and the process of getting them. For Brute-Force I gained access to this intermediary server where your photograph goes when you send someone a picture message. It goes to this server and then goes to your friend. I don’t know who any of these people are, and none of them are the same people, so there is this randomization that is built into the project. I was using a brute-force technique which basically tries every combination of characters to get a file. I was acquiring one at a time and it was kind of a slow process. Hanging them that way I was thinking a lot about how we look at images and also how fragmented that looking is. It turns out that there is a whole range of years and subject matter that I found.

What process did you use to edit down the images to the specific ones you displayed within the exhibition?
I got around seven or eight hundred of them, so I spent a long time editing. This is similar to other projects I’ve worked on where I’m faced with dealing with an archive and making decisions, and wondering if I show the entire thing and how I make a selection. I have been working on this project for several years called “Anthology” where I pull images off of memory cards that I get off of eBay. They are used memory cards so I can “undelete” the data, and for that I was really interested in this point of interruption when the recovery software fails. I didn’t want to show 700, and I didn’t want to be neutral with what I was doing, so I decided to just make all of the decisions. I chose the scale for each piece, all of the frame colors, and edited the order. Everything. That was really fun for me to take ownership of working with these images. I ended up doing an edit that represented the whole project and range of things I got, but also the coolest ones. There is an image of a turd on a poster that is one of my favorite ones. 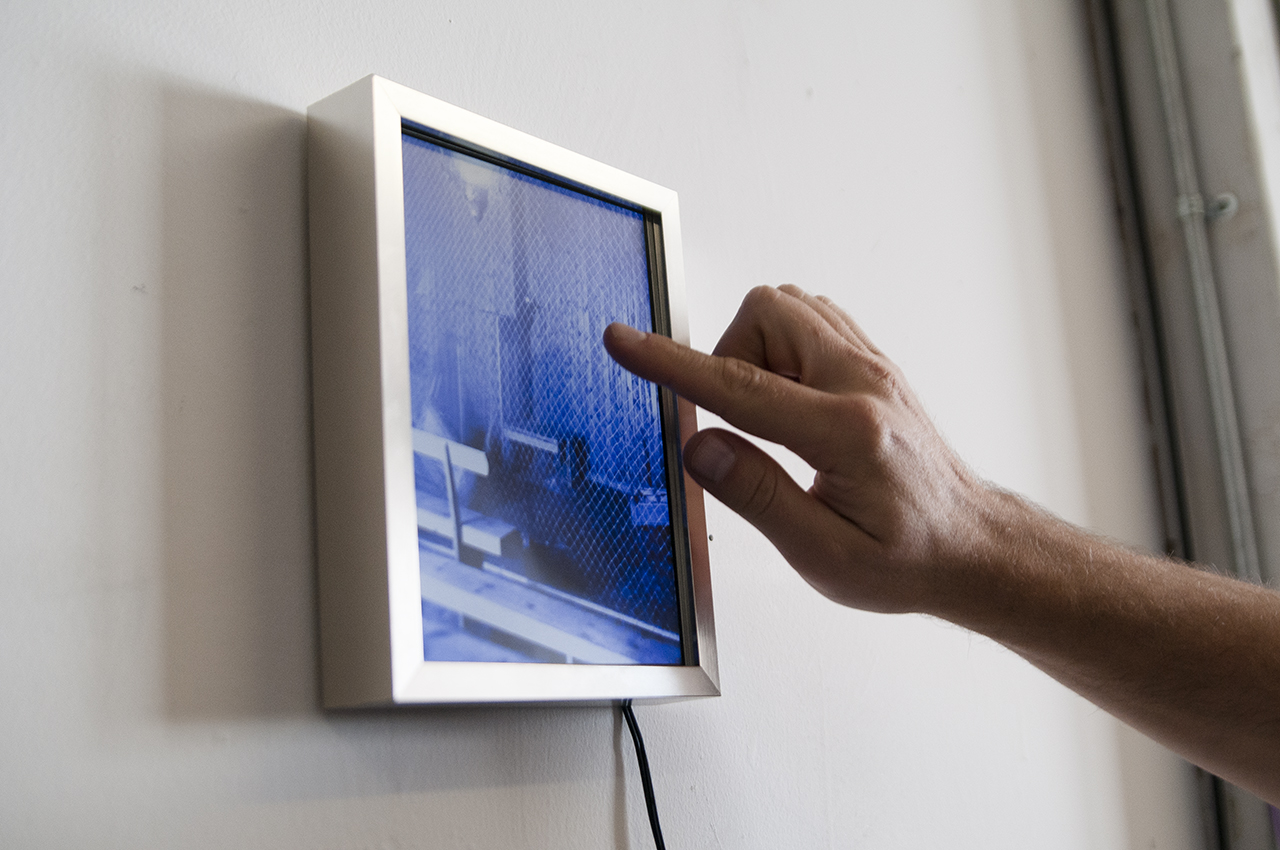 For the selection for “Anthology,” were you more interested in the subject matter that you were finding or the corruption of the image?
The rule of that project is that I take every single corrupted image I find. Earlier on I was making edits and deciding which ones to use and now that I have been working on that project for seven years, the point of that project is to just have all of them. I am not really interested in the images that I get that are whole images because they are not as revealing. They are images that we are familiar with, but the more interesting moments happen when I am trying to recover the thing and it is failing. 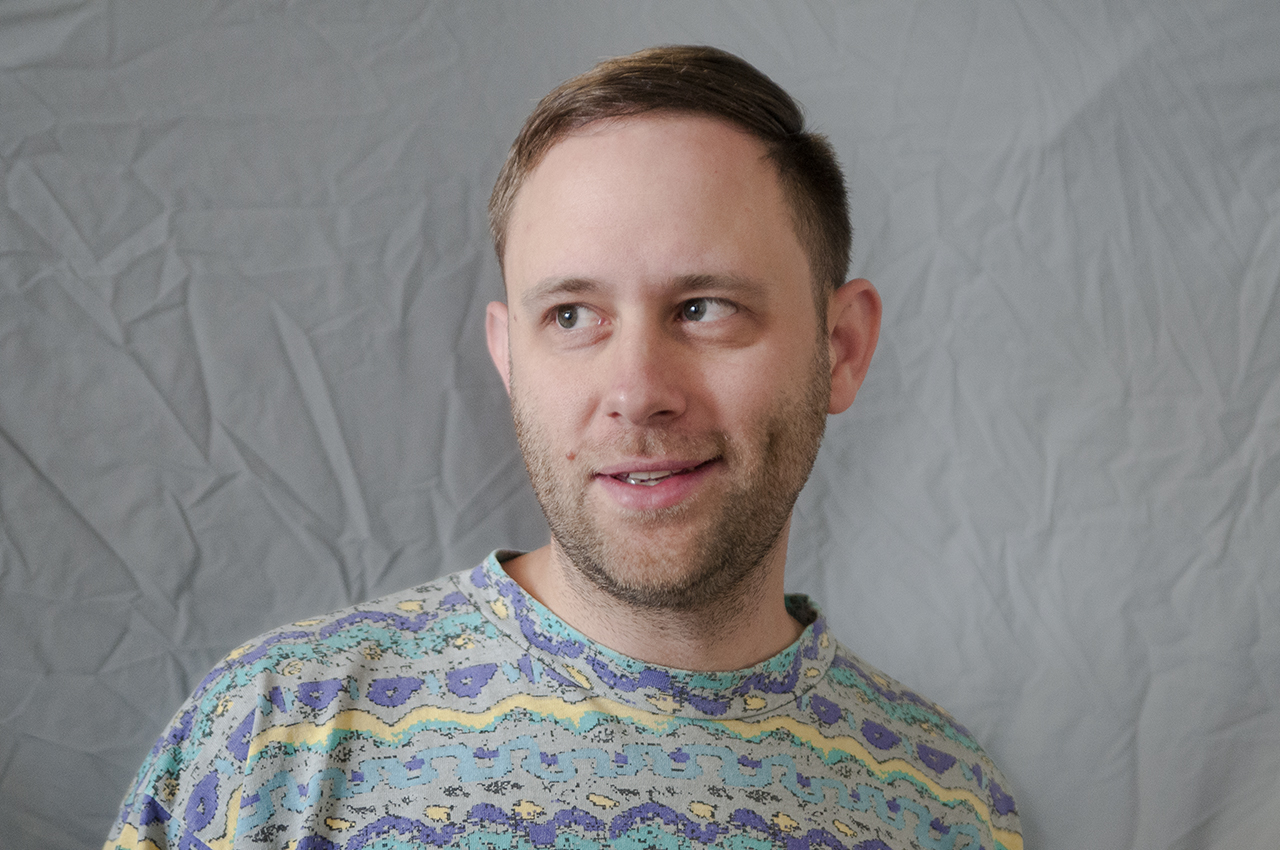 How many memory cards have you purchased throughout the project?
A lot, hundreds. I was trying Craigslist at the beginning but am just buying off of eBay now. It is hard to find them on there. eBay is awesome because I can get stuff from all over the world.

Can you explain what work has stemmed from your interest in WikiLeaks encrypted files?
I have done two projects with Wikileaks. They released these files called their insurance documents and the idea is that they are secured with one of the highest levels of encryption in the world called AES-256 and it is impossible to crack, although people are trying. There is this giant file that is encrypted and nobody knows what is on it and it is supposed to offer protection to WikiLeaks and Julian Assange, so if Julian was to get suicided, then everyone has this file and it is also available via torrent. There are a handful of keyholders in the world and if something were to happen, those people can release the key and then it will unlock it for everybody. The only thing that you can read with the file is the binary, I have done a couple of projects where I am just working with that binary structure and for one file I did this really enormous print and more recently they released three new files and these files are insanely huge. One is 3.5 gigs another one is 65 gigabytes and another is 350 gigs. I had to buy another hard drive. To torrent that was insane. It took two months! But then what do you do with that information? There is an A, B, and C file and I have been turning them into videos. My assumption is that if something is that large it has to have video, it has to. I don’t know what the hell else it could be so I am trying to work within in the structure of what I can assume it would be. I work with this program that converts a small chunk of the binary into a color value and it is just cycling through all of these colors to create the images.