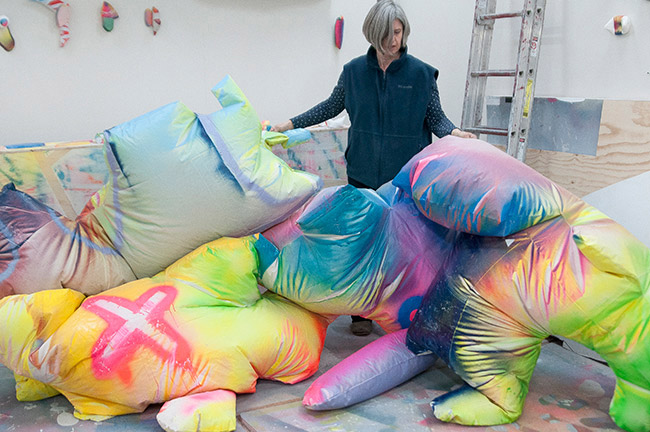 Claire’s studio is located behind her Oak Park home, a space often too small for her large, inflatable creations that tend to spill out into her backyard between plots of tulips. Like the flowers speckling her yard—vibrant yellows, pinks and blues splatter her amorphous objects inciting the innate desire for touch and play.

I\W: How has your move from a basement to an aboveground studio affected your work?
CA: This space has really transformed the amount of white and light in my work. I didn’t realize quite how much difference moving up above the ground would make. Since my new studio is still quite a small space, I occupy it very quickly. It is easy enough when I am sewing my pieces because they are fluffy anyways, but when I am inflating them I have to move out into the yard. I do wish on a daily basis that I had about six times the space.

How do your inflatable structures relate to the human body?
I think of them as figural rather than figurative, but I really think about them as being hunks of meat or blobs or amoebas. There is something that you can grab onto potentially, but it is not necessarily clear. I am interested in appendages and limbs and explicit body images that can be sexual, or playful and cartoon. I have been making these things that have torso or elephantine qualities to them. I am looking for something that is more grotesque. A mix between grotesque and explicit or raunchy— definitely more animal. 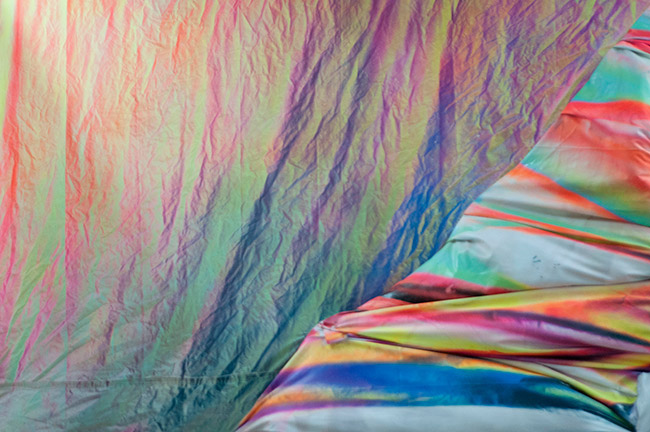 Do you typically choreograph the movements that people perform in your objects?
I usually work with people to figure out the choreography because they can’t see in the object. I also like working with untrained dancers as well as trained dancers. A trained dancer could do leaping and jumping normally, but in that object it is much harder. Often I’ve manipulated a piece of music. The object I did at ACRE was kind of cow-like, so I was interested in a country kind of vibe. I was thinking about cowboy boots and line dancing. I have a couple of pieces of music that I am interested in, but I don’t have a firm idea of what I want to have happen. 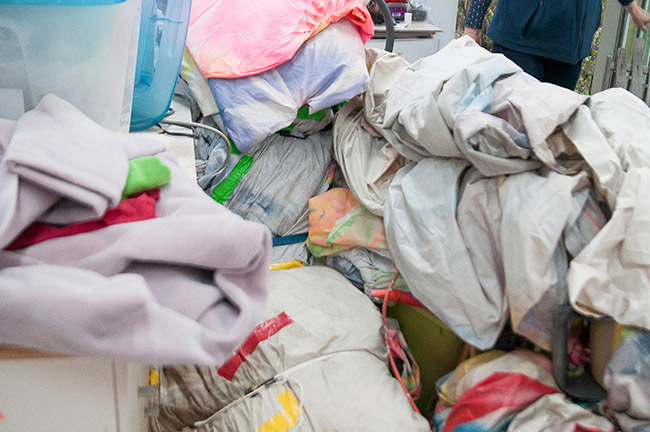 Is your intention when you place a body in one of your structures to purely show the object’s potential?
I guess it is showing the absurdity of the object once it has this entertainment factor to it. My impetus to making these things is mostly about taking an anti-stance, or having an antagonistic relationship to both painting and sculpture. I am not interested in static objects necessarily. I like that the inflatables—even when they are static objects—have a breath to them somehow. The moving thing is also me not being interested in theatre, but being interested in making the object move. It is more about upsetting the applecart somehow in terms of how people understand painting or sculpture as potentially existing. I have also been thinking lately about how the person inside the sculpture becomes the monument, becomes the static image, rather than the person having to do a song or dance.

Photographically [my pieces] look bright and graphic and clean but then when you see them up close, they have got a real crustiness or imperfection. I like that dog hair and dirt and earth collects on them. 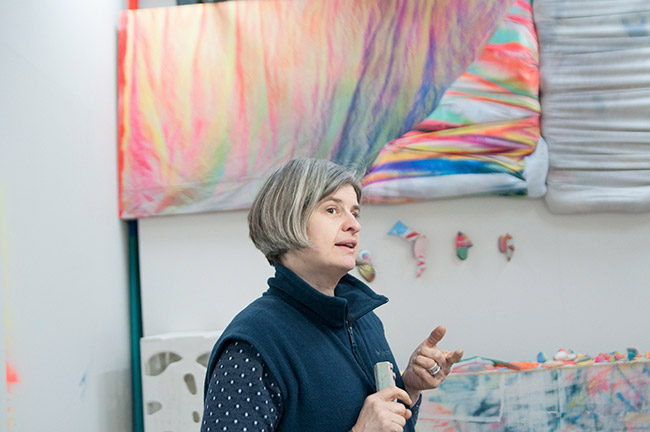 Can you explain the logistics of how someone enters one of your inflatable sculptures?
Each one has its own fan attached that is glued into a backpack, and then the backpack is sewn into the material of the inflatable structure. The fans I buy from a website called Zoro Tools and they are “personal blower fans.” There are two sizes of fans that I use for the larger and smaller pieces. When you are waiting for the structure to fill, I have a velcro tie that I keep the scrunched hole tied with. It is basically like birthing a child. The body then seals the hole, and lets the object inflate. 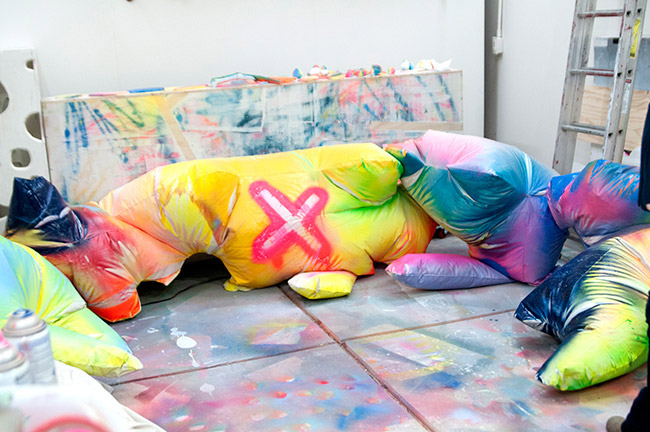 Do you enjoy playing with the overpowering aspect of the inflatable objects?
Yes, very much so—in terms of the physical scale of the object. I for some reason, for as long as I have had kids, have had this weird image in my head of a large architectural form with short legs sticking out of it. All of these scale shifts are in response to that relationship of human and shelter. I realized when I first started having kids that the architectural cube thing that I have always been interested in now has a relationship to freaking out about having kids and having to protect them and giving them shelter. I am not really interested in garment, but I am more interested in the weight that a human being can carry—that idea of responsibility. I think less literally about those things now, I think I have gotten to a stage where the kids are old enough now and it’s a whole different ball game. I think the work is now about me playing with these symbols or material or forms that still have a relationship to playful stuffed toys or bounce houses or odd cartoonish, blobby things. It is a much more playful, intuitive process where I don’t really have necessarily one individual image in my head. 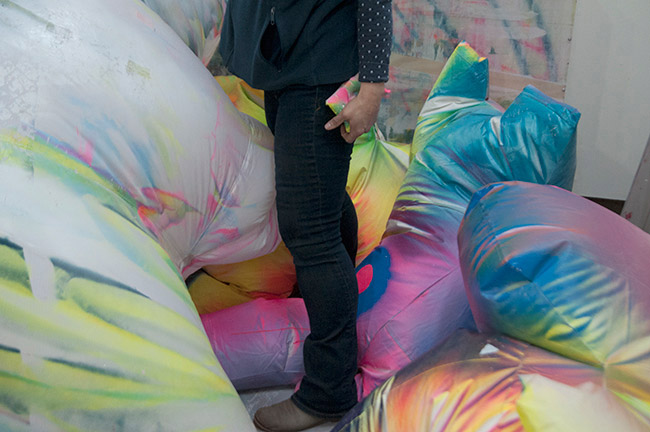 Has your work always been so vibrant?
Pretty much. In graduate school I went all black and white for a year because my undergraduate had been bright, colorful grid paintings. I have always been fascinated by the perception and visual energy that is imbued in color side by side, in complimentary colors. I am really interested in how they engage with the senses in a different way. They are not cerebral. I am very interested in them being physical—nasty in some ways. I think the other thing about these objects is that photographically they look bright and graphic and clean but then when you see them up close, they have got a real crustiness or imperfection. I like that dog hair and dirt and earth collects on them. They do age substantially each time I show them, so I have to do a lot of upkeep to them as well. I patch, clean, wash and repaint them often.

Do you feel like your objects are performing, even without a body inside?
Right. That’s what I love about the static ones, the non-dancing ones. There is so much less pressure on them, and they don’t rip as easily. I don’t have to organize people. I am in much more control of them, and I do like the breath of them, or the pressure that people can put against them. A lot of people engage with the work because of the color and the playfulness of it. I love when people are engaged in a way that they want to touch and get up close and personal unlike most contemporary art work where you do not touch. I am intellectual in some ways, but I totally appreciate that immediacy that people to respond to the work as well. It becomes an important part of how the work is existing.