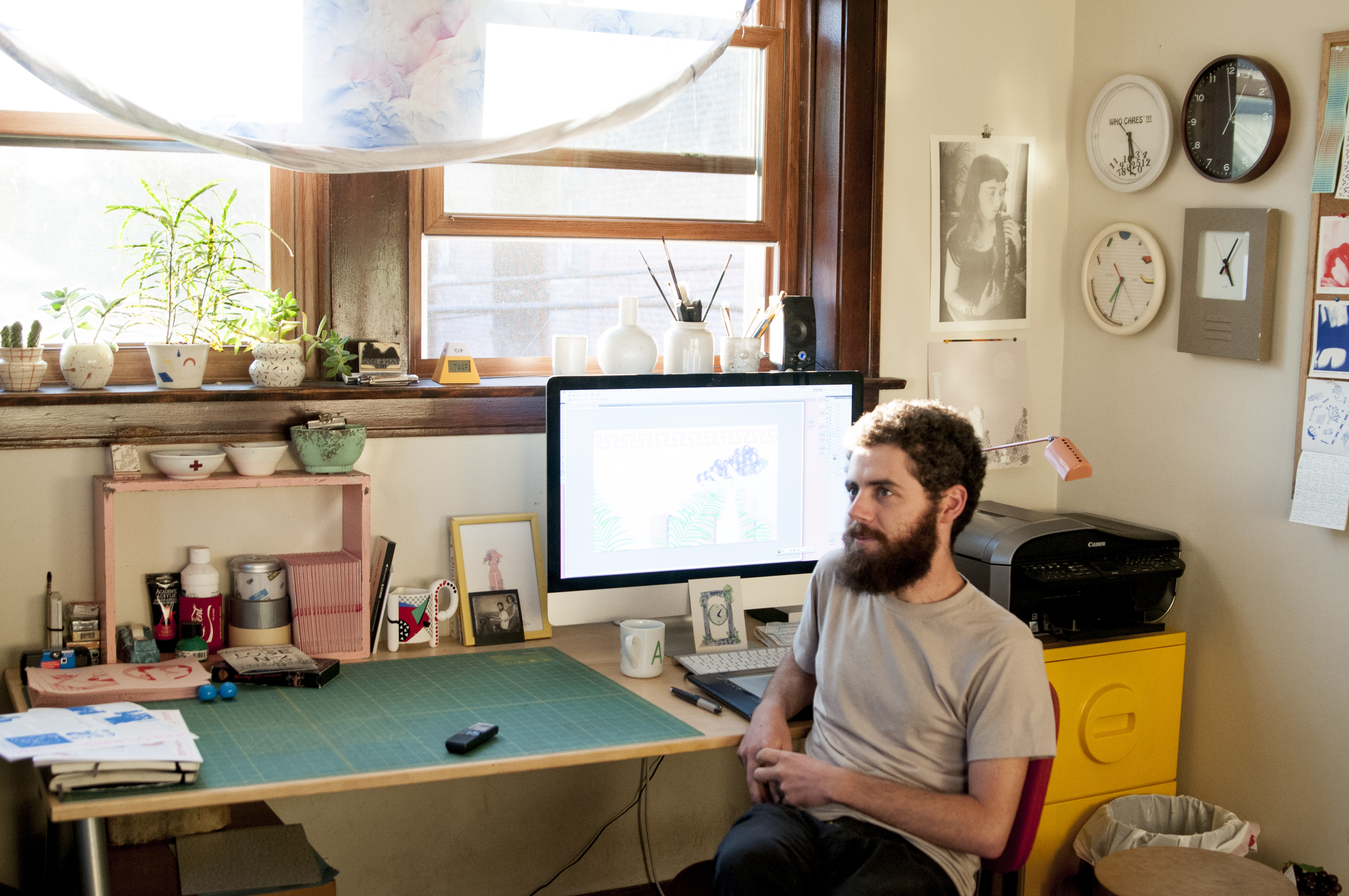 Clay gave us a tour of his studio and home in Pilsen. It used to be a funeral parlor, but is now home to a live man, Risograph, and three-legged dog.

I\W: How would you describe yourself as an artist?

CH: I want to call myself an illustrator. I don’t feel like there is much difference between art and illustration. I just like more graphic things. I try to keep it relatively light-hearted, not take it too seriously…which I think is important to me as an artist. The art that I want to put out into the world is about light-heartedness. 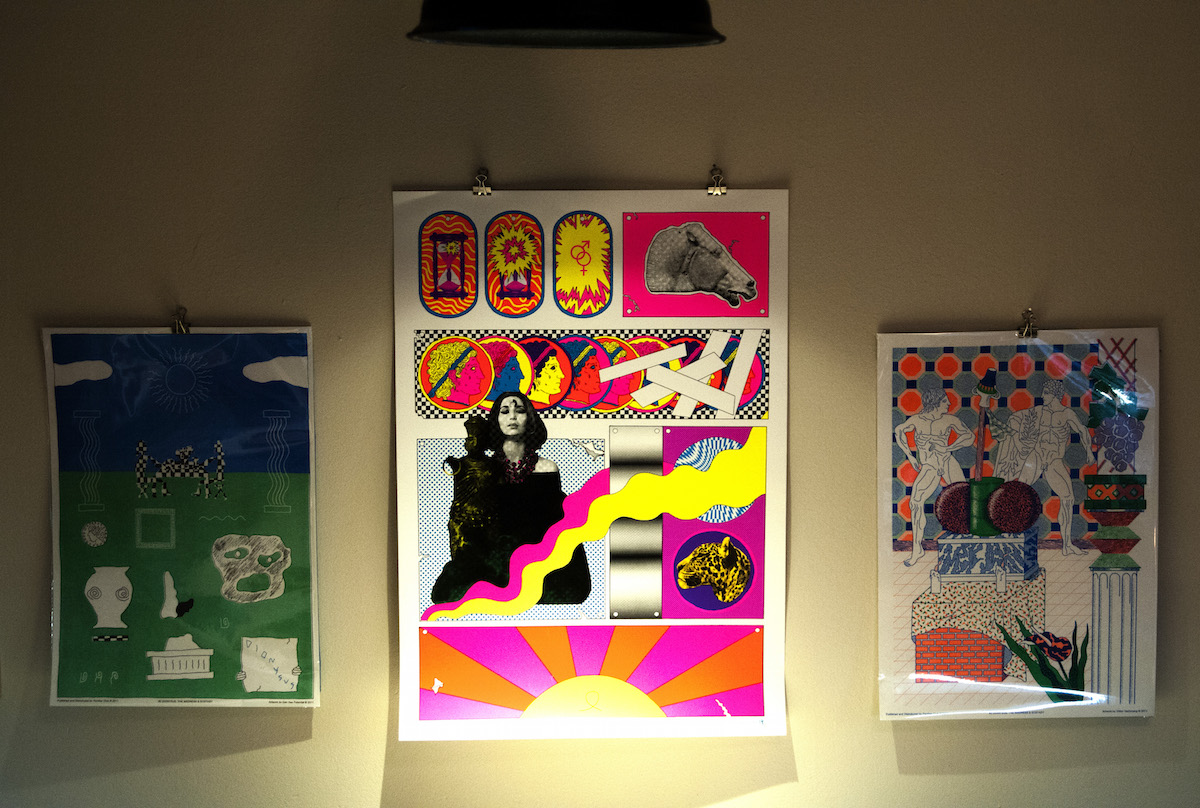 A lot of your work features very surreal environments. What kind of universe do these pieces exist in?

For me, part of it is trying to create a universe. Basically as I learn to draw new things, I add things to this universe. So I just use the same objects over and over again. I slowly add new ones in and then slowly phase old ones out. I’m really into interior decorating and design. I feel like I approach drawing the same way as I would approach decorating a room—I just have a space, and I fill it with objects.

Where does your interest in furniture come from?

My dad is a real—not hoarder—but collector. He is a little bit of a pack rat, so we grew up going to a lot of flea markets and garage sales. He was constantly collecting stuff and our house was just full of knick-knacks and artifacts and amazing furniture. I just kind of grew up around that stuff and it always interested me.

Did you watch a lot of Pee-Wee’s Playhouse as a kid?

Is that an inspiration do you think?

Do you personify any of your objects?

Not really. Everything feels pretty static to me (until I put googly eyes on it) 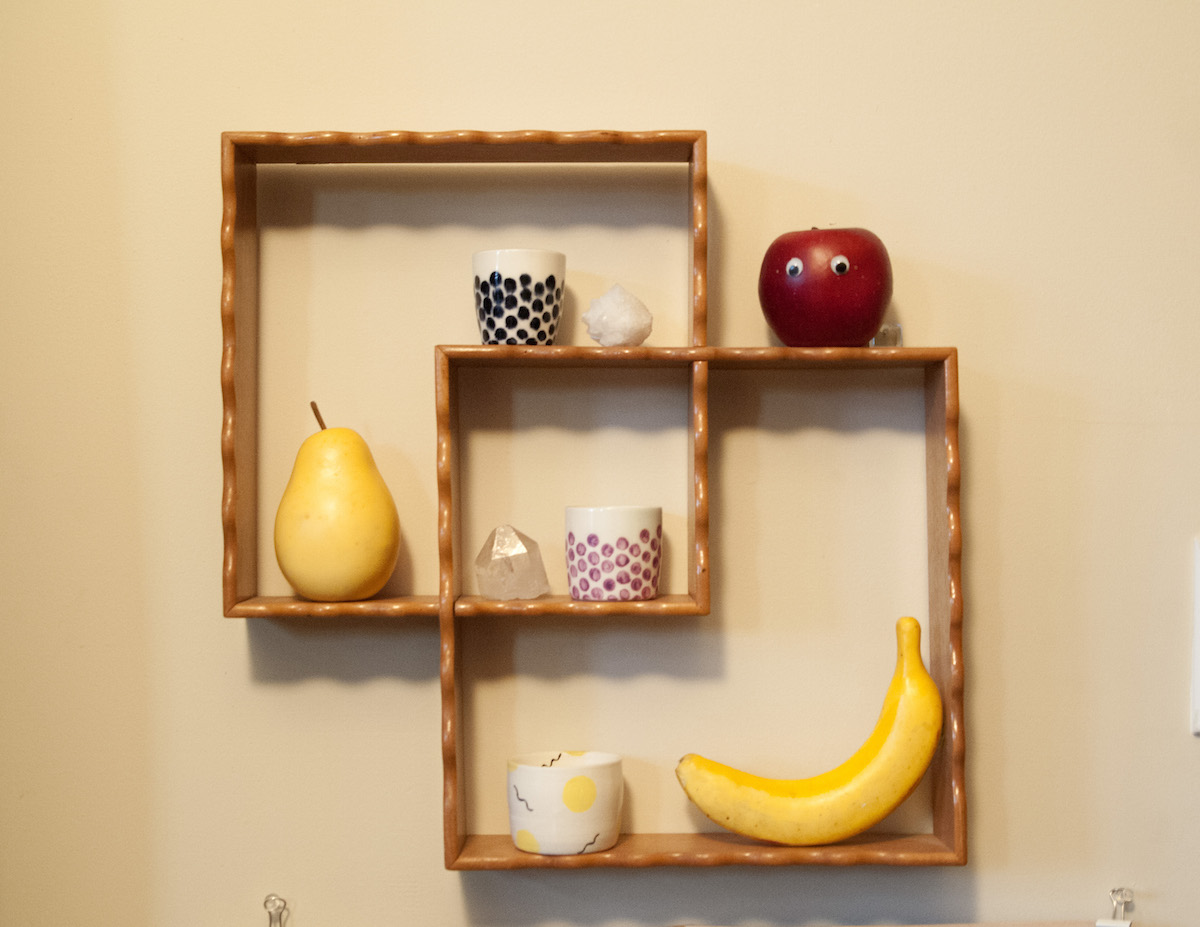 What do you think the most important aspects of collaboration is?

For me, it’s kind of about getting outside of my comfort zone. I don’t actually feel very comfortable collaborating, which is mostly just a lack of self esteem and a fear of drawing in front of other people. So I think it’s just a good thing to do—to push yourself. I try to collaborate as much as possible because it helps me, and also it’s just a fun thing to do. It seems healthy to make things with other people, and get their perspectives on the things that you’re doing.

I feel like I approach drawing the same way as I would approach decorating a room—I just have a space, and I fill it with objects.

Do you usually collaborate with strangers or friends?

It’s mostly strangers. People I get in touch with on the internet. There are millions of tiny, tight-knit internet communities, and I feel like I’m part of one. It’s often people whose work I’ve seen and liked. I’ll just send them an email and sort of start a relationship that way. A lot of the collaborating is just done over the internet, so I’ve never actually met these people. A lot of the times I’m collaborating with people that I would have most likely just end up copying anyways because I really like their stuff. It’s more fun to work with them than straight up steal. It’s a way to justify stealing from them.

What is your most interesting collaboration you’ve participated in?

My favorite collaboration I’ve done is probably this calendar with my brother, Wiley. Wiley Jr. is my dog, and my brother is Wiley Sr. It was the first time that we have ever really collaborated on anything. He has definitely been one of my biggest influence artistically my whole life. The calendar was just one of those times that I was like ‘Okay, time to step it up and bring my own thing to the table’ after copying him for 25 years. So that was really fun. 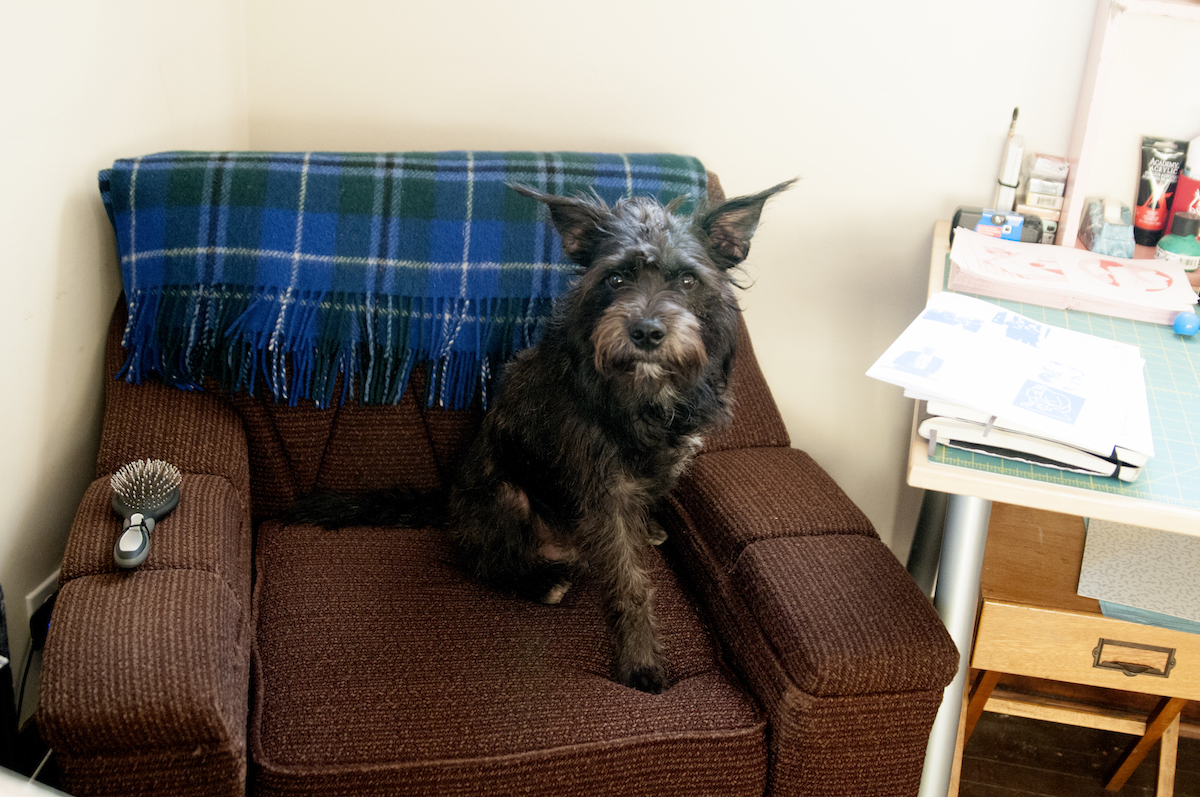 I am obsessed with the boobs you do.

I just did a fresh pair today!

They are perfectly shaped. I am kind of jealous of them. Who has had the most perfect pair of tits you have ever seen?

You mean in person?

It doesn’t have to be in person.

I can’t even really say that there is any one pair that sticks out. It’s just a general appreciation—a broad appreciation. It’s just a good shape with a lot of history in art. A real powerful symbol. It’s just another one of those things I added to my repertoire of objects to put in a room. 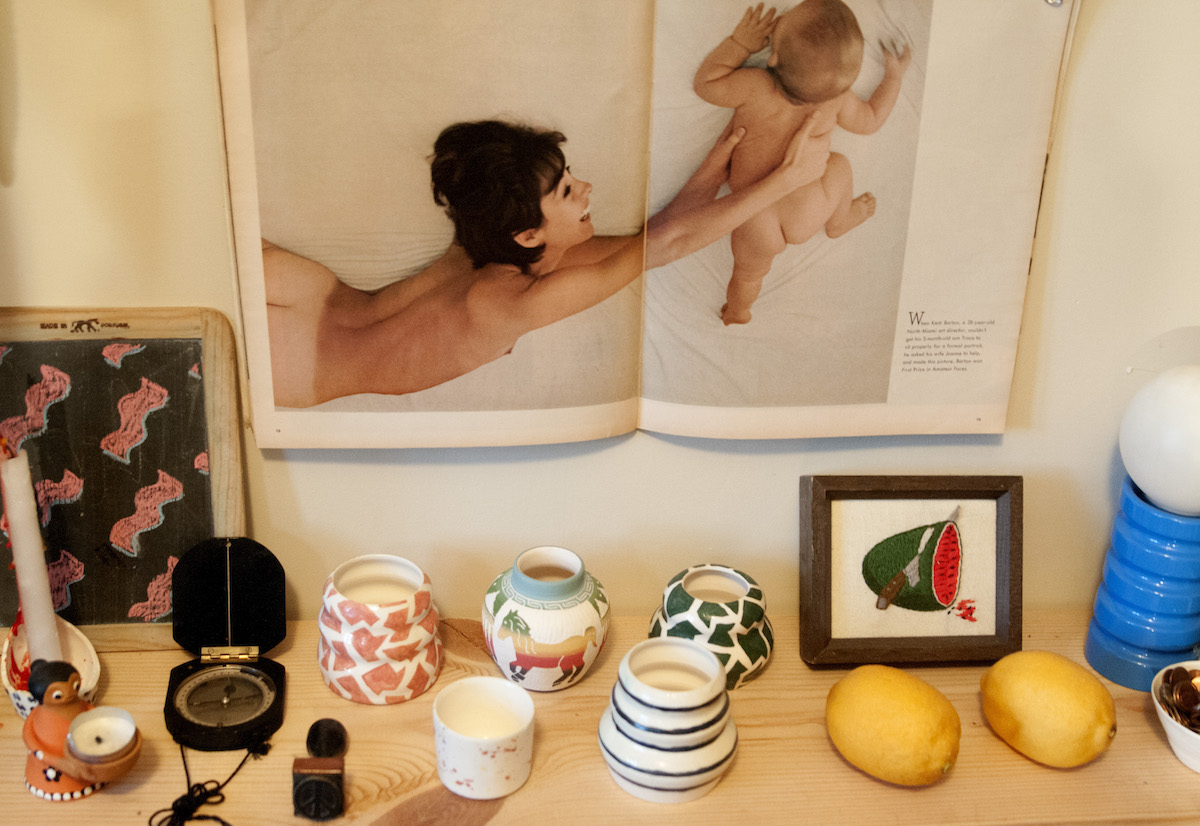 What materials do you use?

Just about all of it starts with pencil and paper. From there it will either just stay a pencil drawing, or I will turn it into something digital. Then I just use Photoshop for everything. A lot of things are just completely start-to-finish Photoshop drawings. Then I have this printer. This is a Risograph, it’s basically like a screen printing machine. It behaves like a Xerox machine, but it prints in a way that has a more handmade quality. Like screen printing, you print one color at a time and just keep feeding the paper through for each color and build up your image that way. It’s a really fast, cheap way to make multiple color prints which is awesome. I spent the last year just getting more involved with that. They are becoming pretty popular amongst self publishers. 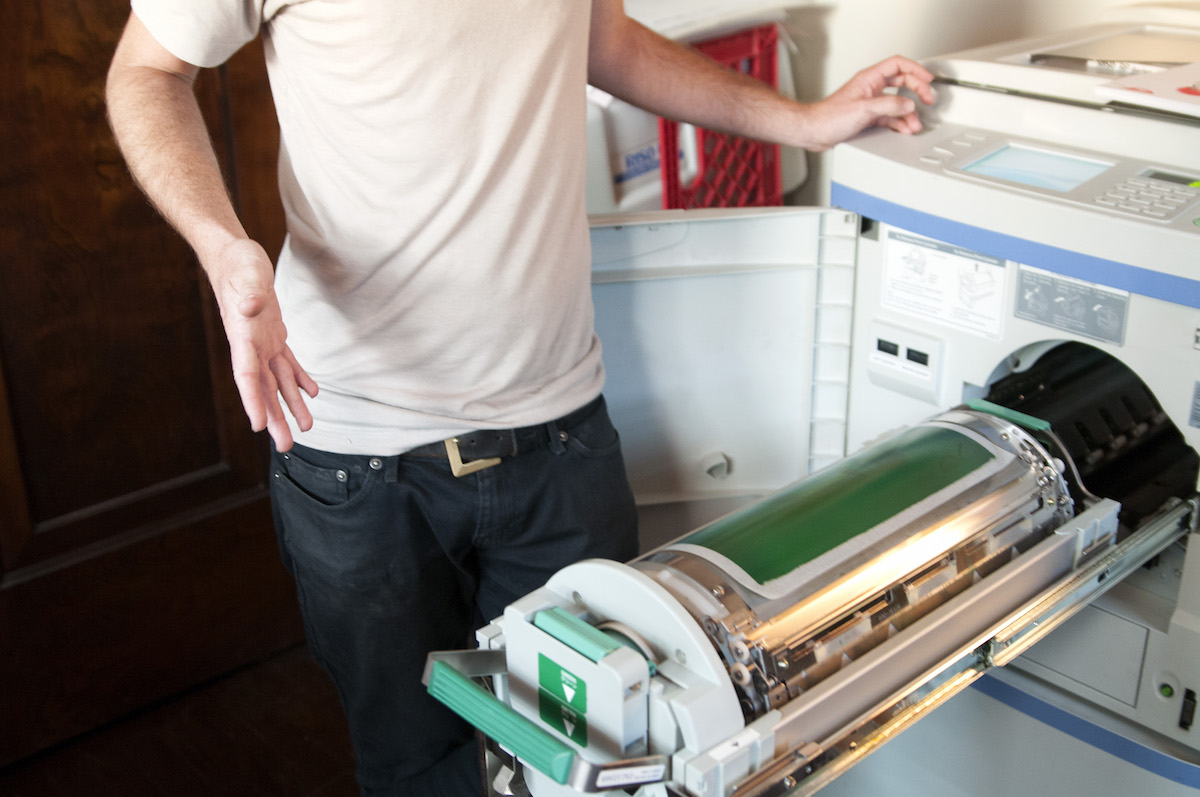 How did you end up being able to get your hands on one?

You can find them used. I just got one off of Craigslist in Chicago. I had wanted one for a long time and when I moved back to Chicago after living in Canada, one popped up so I got it.

How did you come up with the name ‘Tan & Loose?’

That name started as a joke between me and my friend Courtney Reagor. It was just something we started saying one summer. That was the vibe of the summer. ‘We’re just going to get tan & loose.’ It just remained an inside joke for a long time, and we would talk about starting various projects within that theme. Then I started Tan & Loose Press as a little side project. Once I made the website I was basically in too deep and I couldn’t change the name. I feel a little bit stuck with it.

But it fits your vibe so well!

Yeah I think it does, and I am slowly coming to embrace it because it ties back into the light-heartedness. It’s important that people don’t take it too seriously, so I think that name does help with that.

You’ve mainly just been printing your own work under that?

Yeah so far it’s been mostly my own stuff. I will take odd jobs here and there, but I don’t really consider that Tan & Loose.

Yeah that started as a sort of exercise to learn how to use Photoshop when I got out of school. So every Sunday I would sit down and make a digital drawing. Then it became a bigger thing, and it slowly became the main focus of that blog. So I just committed it to that.

I like how a lot of your stuff looks wet.

That’s a good way to describe it. It’s almost becoming a problem where I just put this shine on every single thing.