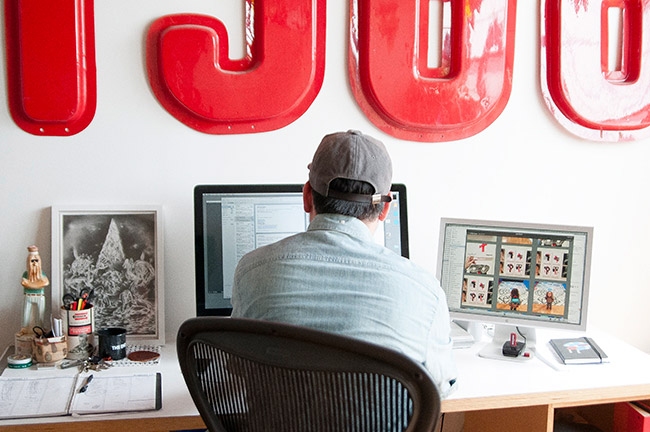 Once obsessed with limiting the connections between his paintings and graphic design, Cody has recently migrated to an acceptance of their related imagery, allowing his painting to become more planned. Cody continues to produce graphic design work for his company Struggle Inc., while also focusing further into the overlapping influence of cut paper collages within his large metal sculptures and paintings.

I\W: What are the common themes that you incorporate in both your graphic design and fine art?
CH: It all starts as shape-based. It is shape-based in the visual aspect, but in my head those shapes are telling a story to each other. I am utilizing these very simple, clean shapes to tell a story even if I can’t necessarily translate that to someone. I used to try and avoid as many similarities as possible between my personal and design work. For many years I thought they were completely different. In my most recent series of paintings I have been more comfortable letting them merge. Stuff would cross over visually before, but now my metal sculptures are starting as cut paper collages, and those are the things that feel just as at home in my design work. The collages get edited on the computer, where before all my paintings started with a blank canvas. I felt that it was important to be a painter that just painted. Now I have been doing studies ahead of time, and working on my pieces more like graphic projects. 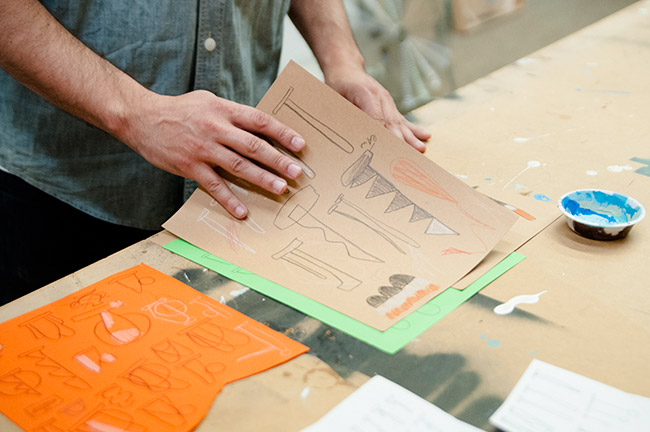 So you’ve begun to feel more comfortable with planning painted pieces?
I think its time for both my paintings and sculptures to exist in the same world. There was always a difference between the sculptures and the paintings, they weren’t one-to-one even though in my head I thought they could be. My new paintings are similar shapes, just translated differently. I think it is exciting to see the same piece of paper exist in a painting, and also exist as a large piece of metal. 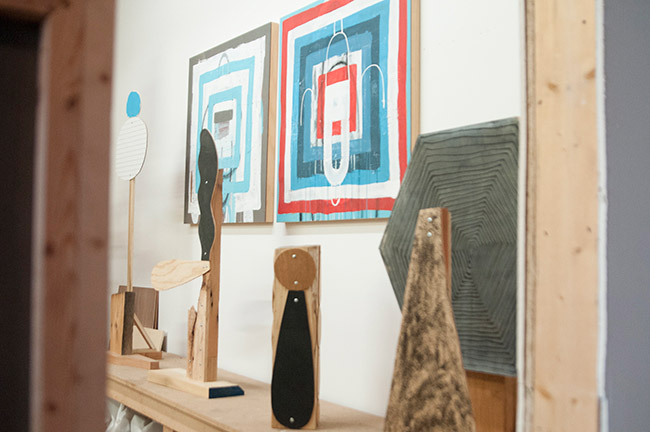 How have you been approaching ceramic works?
My ceramics have been more of just studies. I was excited about the process and getting my hands dirty. I don’t have a kiln, so it is still just experimenting. I would like to get deeper into it within my practice, but it is still just how far I can get with the materials that I have. I am definitely going to explore that further, but right now my focus has been these larger metal pieces.

I used to try and avoid as many similarities as possible between my personal and design work. For many years I thought they were completely different. In my most recent series of paintings I have been more comfortable letting them merge.

Do you think you abandon more ideas tied to your graphic design or fine art work?
Definitely more for the graphic. If you are presenting to a client, you are showing them three to four ideas and they pick one, where for a painting that doesn’t happen. I guess I am doing paintings that never see the light of day, but it would be rare that I would go to a gallery and say “Here are four paintings, you get to choose one to show.” I am the client, where I basically get to choose what I show. This is what always made me like doing both, because one had this client that kind of got in the way but gave you a new set of challenges, and the other was all personal expression. Someone could decide to not show a painting you produce, but can’t tell you not to create it. 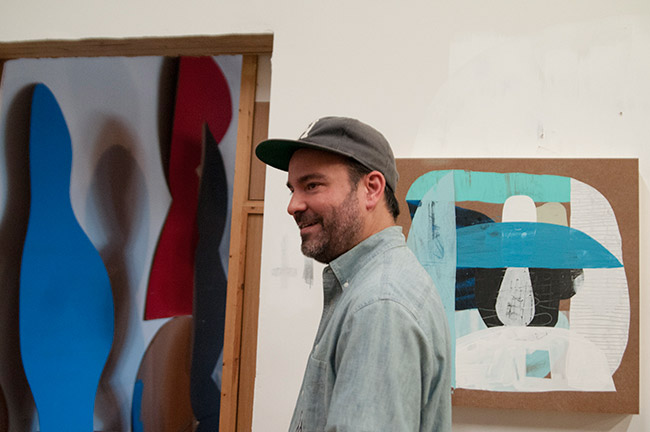 Site-specificity seems to be very important in a lot of the works that you produce, why is it so critical to many of your pieces?
I kind of just got into it. I was doing a lot of work on the streets with some friends and it rose out of that. I was picking up a lot of scraps down in Pilsen. If you are going somewhere and trying to find materials on the way and just make something with that, there is a challenge. It is pretty open and free. If you started with a sketch and just bought all the stuff that you needed to finish it, that doesn’t seem as exciting as having no idea what you might find for your sculpture. The last time I went to France, I found all the materials and tools I needed there and it greatly impacted what I actually made as opposed to just shipping 15 finished sculptures out there. It is much more about the location. It isn’t even anything that deep, it’s just about having this true connection to location and to that experience. In my head it’s about that week while I’m there and what I worked on more than what the final photo of the individual sculptures were. If I just sent everything, I wouldn’t have the same connection to that show or experience. 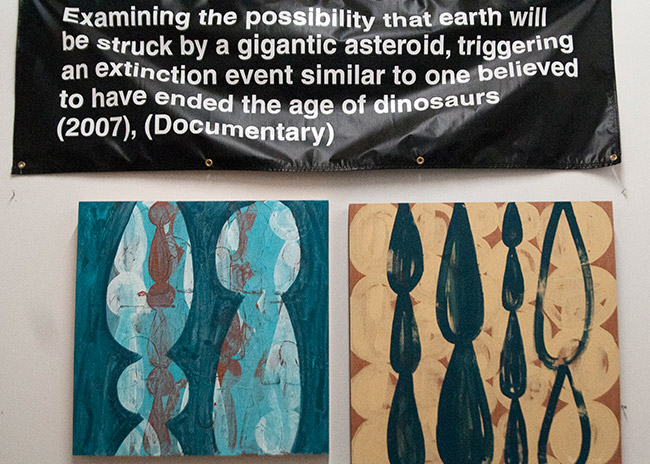 How has that site-specificity influenced your work outside of sculpture?
I don’t know if it relates as much to my paintings. It definitely plays a bigger role in the sculptures, based on getting so used to using whatever materials you have on hand as opposed to buying just whatever you need. You tend to just make stuff more on the fly. Even the stuff I have in the back of my studio, like piles of wood I have been collecting for years. It’s almost the same as finding them on the street. I am just taking ten pieces of wood out and saying that I am going to make something with those today and see whatever comes out of it. It’s all changing on the fly, and with what you have on hand. It’s about the process of making it, rather than the final product. No one ever gets to see those steps. 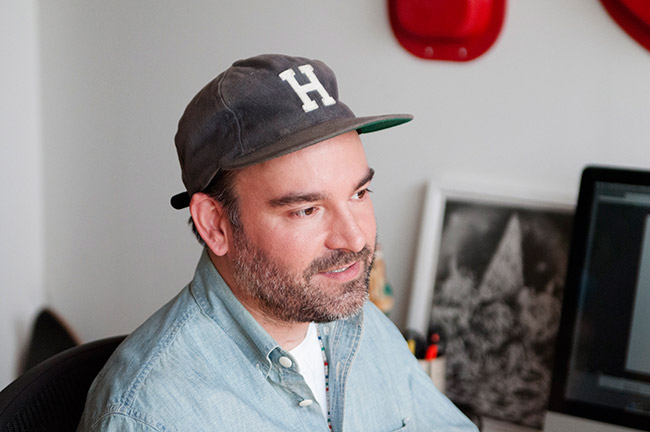 Do you tend to stick to color themes consistently?
Somewhat. I have been trying to avoid that part of my process, but there are some colors that I just really like and work with them until I feel like they are done in my head— they just keep showing up. I use red, white, and blue a lot which definitely have triggers for different people, but that’s not really what it’s about for me. It’s about how they work together. It’s tough. I tried to make green paintings, but they just turned out weird. Some colors I just don’t feel comfortable painting. It comes in waves. The blues I will use will change. The blues I was using six or seven years ago were much lighter. They are really different than those that I am using now. I think that probably started by me just scraping for materials. If I buy a gallon of paint from Home Depot, you would have enough of that to last a long time as opposed to a tiny tube that you replace every day. It probably started that way 20 years ago when I had no money and had to use that blue paint because it was all I had. I hadn’t thought about that, but it is probably how that started. If I am making a painting and comfortable with the colors, that is one less thing I have to worry or get freaked out about.

In what ways has your work developed in Chicago that you believe it couldn’t have developed in other cities?
That one is kind of hard to say. People always ask about my Chicago influence. I love it here and have lived here for so long. I will probably live here forever, but I don’t know how much of my work’s influence is really Chicago-based. I think the fact that materials are from here makes a difference. If I lived somewhere else where I didn’t have access to scrap materials… I probably wouldn’t be making sculptures out of scrap materials. It’s kind of hard to tell how Chicago influences my practice, it’s difficult to judge the influences that go back and forth.