Danny Giles: The Utility of the Synthetic 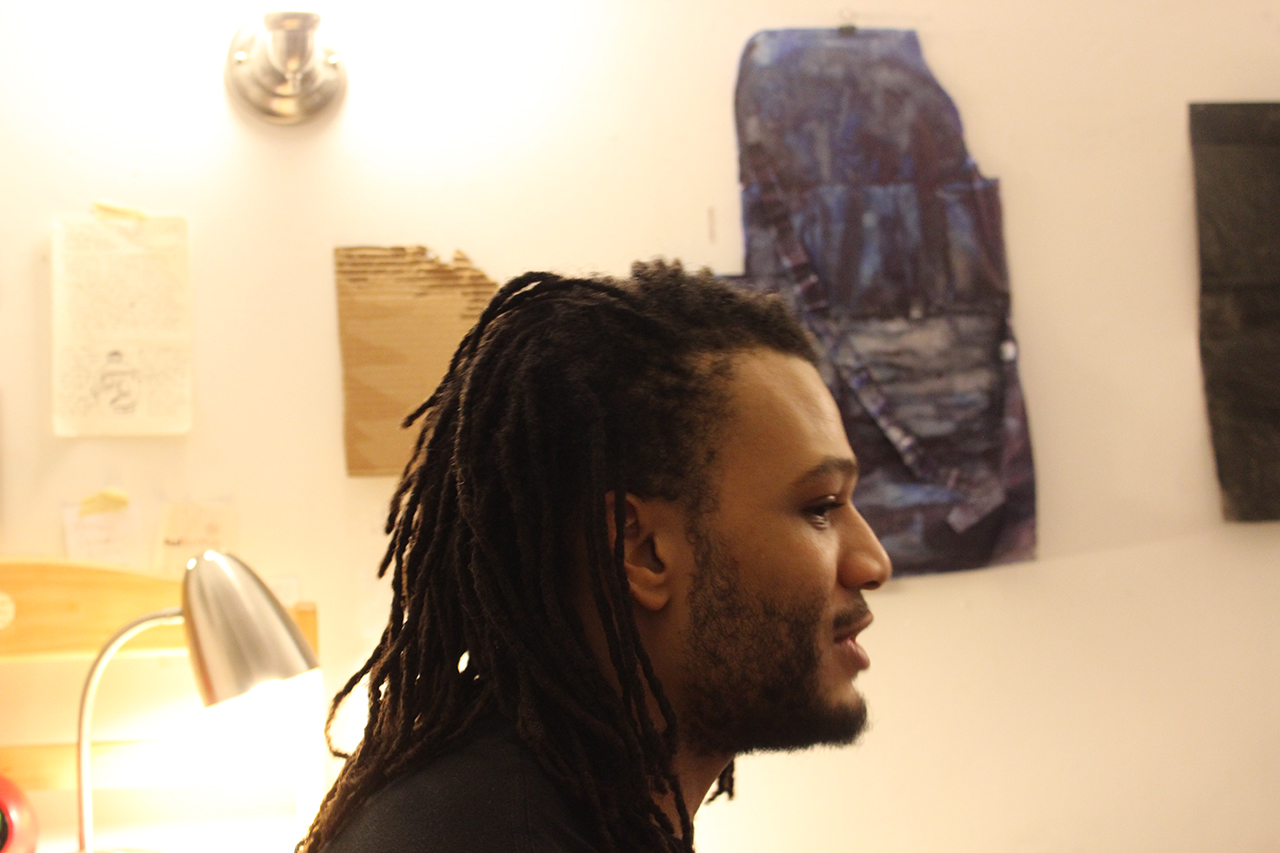 Danny works from the home studio he shares with his partner in Rogers Park, a zen-filled apartment with lightly-colored walls and plush floor cushions. Creating work from florescent lengths of synthetic hair, Danny stretches the material’s ability to point both away and towards the human body.

What is your draw to synthetic hair?
DG: I started using synthetic hair in undergrad, and it was a really intuitive material. My studio was downtown, and I realized all of the other materials that were available to me other than art stores or hardware stores. I am interested in signifiers of identity, and playing with where formal language overlap. It started out as more sculpture, with just a few different weird objects and then into grad school I started using it more two-dimensionally, more like ready-made brush strokes. I would buy these super cheap lengths of hair that were $1-$2 a length for a pretty good amount of material and I would use them to create compositions with the wall or space.

Were you more interested in the synthetic nature of the hair or the fact that it was hair?
I think the idea of it being hair more than anything drew me to it, but also the fact that if you think about the material for long enough it quickly becomes hair—and not hair. It has the potential of assuming that role in the right context, being put on the body, but the way I was using it was always displacing the material. It was inviting this slippage with how far I could stretch the ability of the material to signify these disparate ways, as well as alluding to a body. I like that it’s very much like paint. It is a plastic medium that is capable of different things. 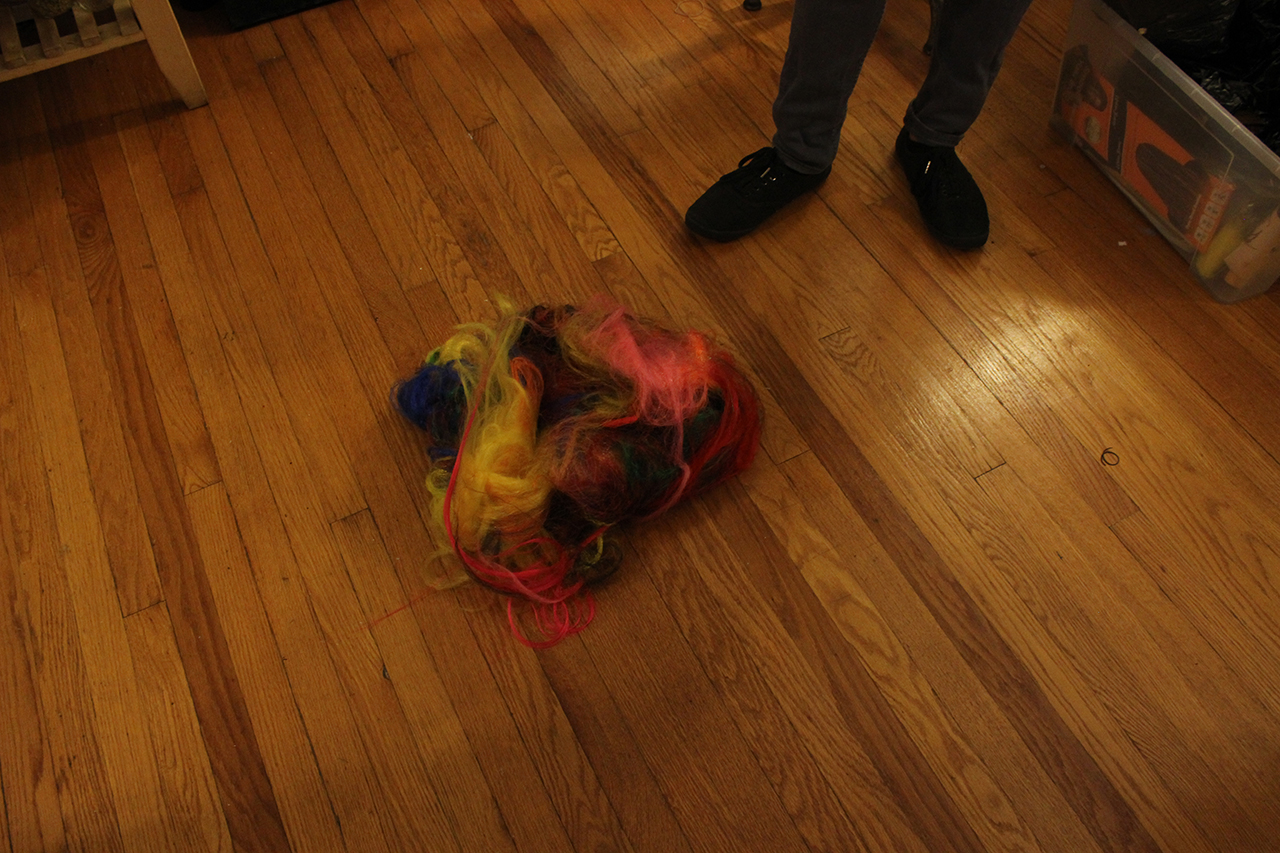 What was the significance of using plexiglass with the synthetic hair for a few of your pieces of work?
When I started to really focus in on what the material meant, or what it could mean, I got a lot more interested in estranging it from its immediate origin—what it would ordinarily be used for. Taking it as far away from the practice of hair adornment, exploiting the lack of the body and the space that it was shown in. Plexiglass is this object that is meant to be invisible, but is totally instrumental and present. I like that function of the plexiglass, how inviting in this perception of an apparatus that is compelling this material to perform visually, but then that apparatus is trying to sneak into the background. It is separating you and the person at the currency exchange or you and the bus driver. It is always there, but it is super invisible and it also speaks about architecture. 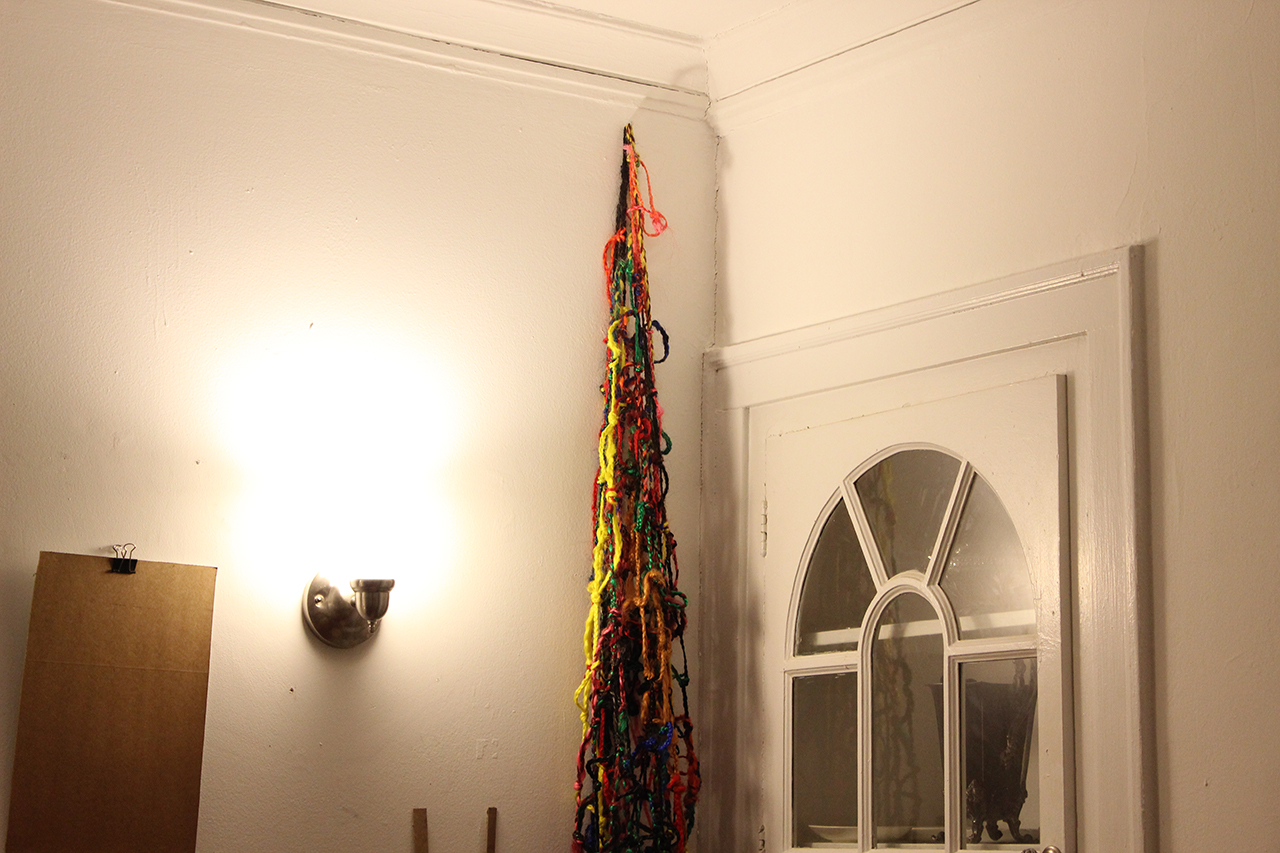 I am interested in where these kinds of visceral and aesthetic judgements get invoked, but are maybe troubled by actually looking at the material conditions that are there.

How has your work with hair morphed more recently?
It took me four or five years working with the material to start braiding it. I actually made a net, which is a pretty new thing.

Why a net?
It just felt right. My thesis show was really heavy in the hair installation stuff, and I wanted to put that away because it felt a little overbearing. I didn’t feel like I had done everything I could do with the hair, or maybe the right thing, or given it the right gesture to create exciting meaning. I don’t remember how I came to start braiding it, but maybe not working with it for awhile made me realize that I should do the most obvious thing with it. Now that I have started to do it, I am really interested in the idea of utility— if this apartment was burning down, the net is probably the only piece of artwork I would take with me because I can use it. 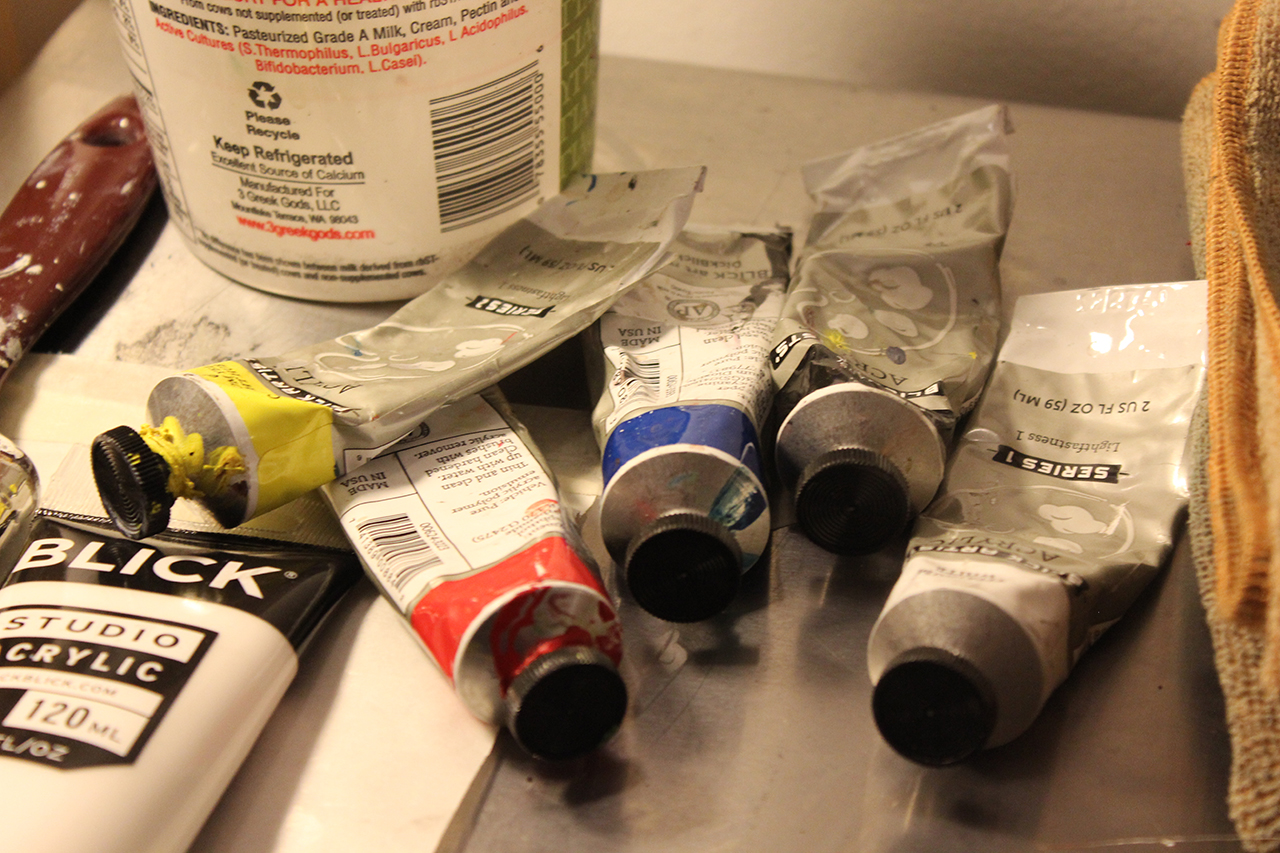 Are the bright colors of the hair another way to mimic paint, or do the colors have their own implicit meaning?
I don’t think I am at this point concerned about making it behave like paint. I think it already has that built into it through color and line and texture. It shares a lot of space with painting vocabulary already, so I wouldn’t say I am pushing that or really thinking about it especially right now. 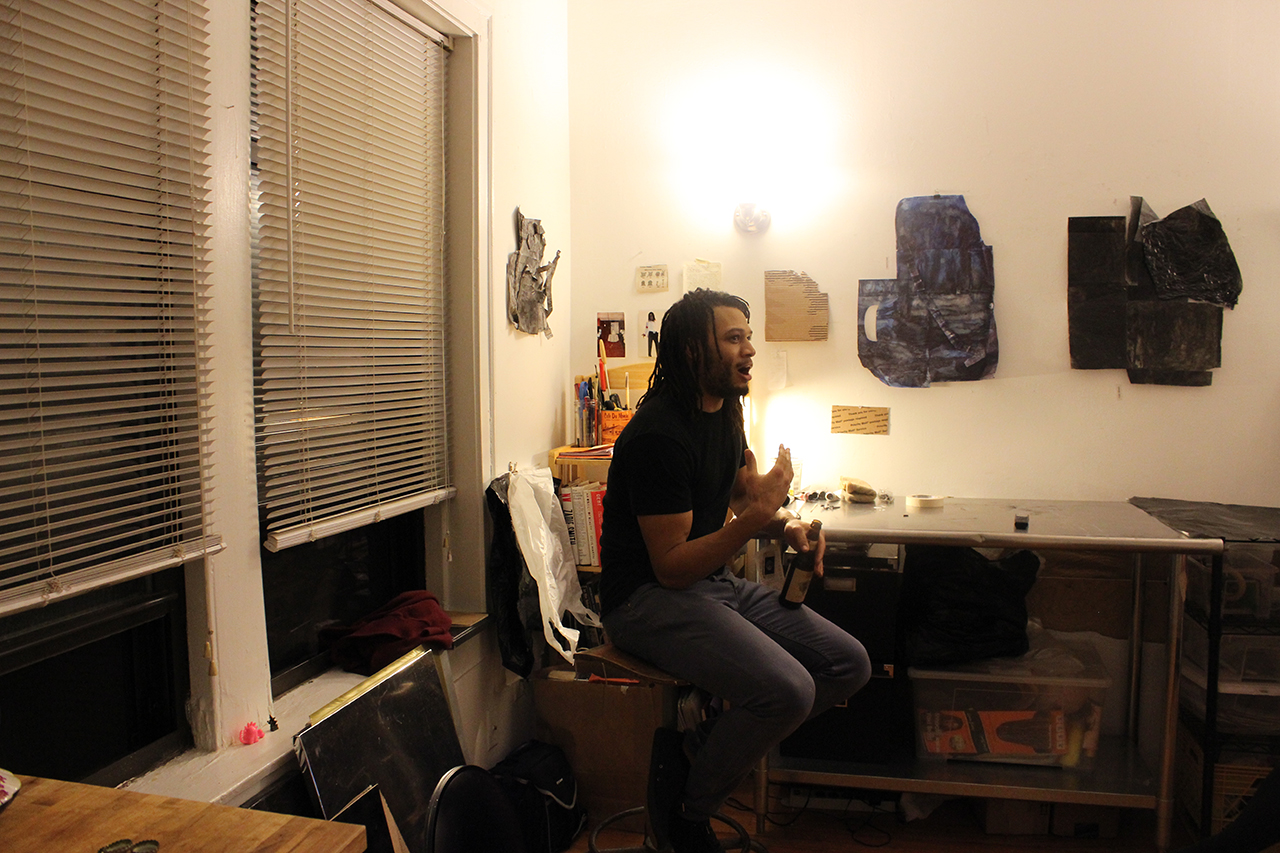 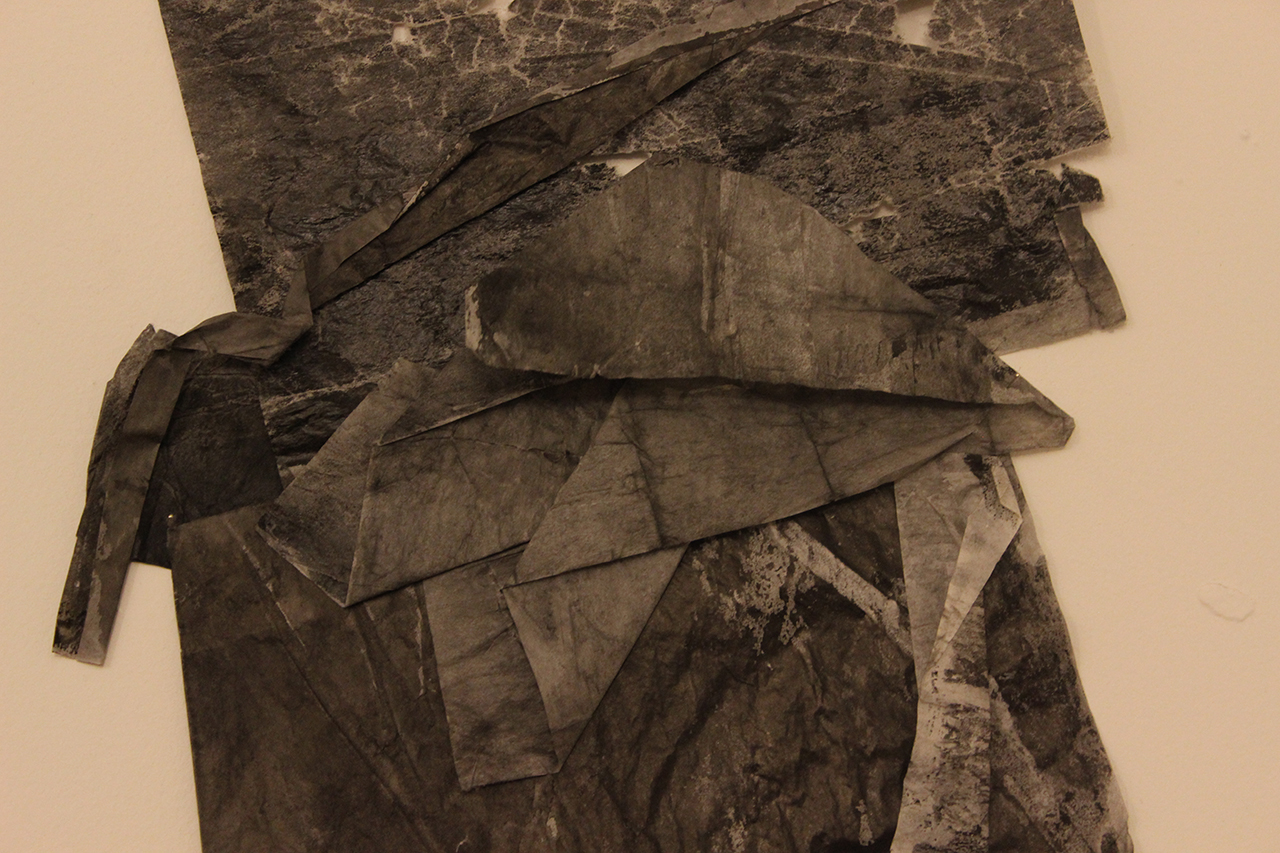 Do you play with the grotesque nature of hair off of the body?
I think it’s more grotesque when it’s put back into some kind of bodily scenario. This hair is so sterile, it is just plastic. I am interested in how it signifies the grotesque, but when I am working with it, it is just material. It is just stuff. I think in some of the installations it becomes sort of exalted. In one piece I just used the cut ends of the synthetic hair and it became this sort of misty field, which is sort of visually transcendent in a way. I am interested in where these kinds of visceral and aesthetic judgements get invoked, but are maybe troubled by actually looking at the material conditions that are there. That net is made out of hair extensions, but it is so physically close to a manilla or nylon rope net. It is easy to read the work just in terms of ‘oh you bought that as hair extensions’ but the more I work with it I think the easier it has been to just deal with it as material.

Are your drawings your most recent pieces?
Yes. I started those drawings this summer. They started out as really intuitive and reflexive formal exercises about ink and paper. But I realized lately that I have returned to a lot of ideas that I had really early on in similar work I made years ago. I was really interested in entropy and using gesture as a channeling of the effects of time. Not using gesture as a mark of my individual creative genius, but trying to think about a surface in the way the elements and shit floating around us thinks about a surface. I was making cut and folded paper constructions that were mediations on things like boxes and bags that you would find in the street. It’s about this sort of constructedness, but also about this constructed vessel being an impossible vessel that never really existed, and can never really contain anything and that bares these marks of the process of time. It’s the kind of work that when I sit down and do a lot of it, I discover a new language to talk about them with. I wouldn’t say I am at the most precise moment in verbalizing these pieces, but I think they kind of come from a place that is really foundational in me as a maker. 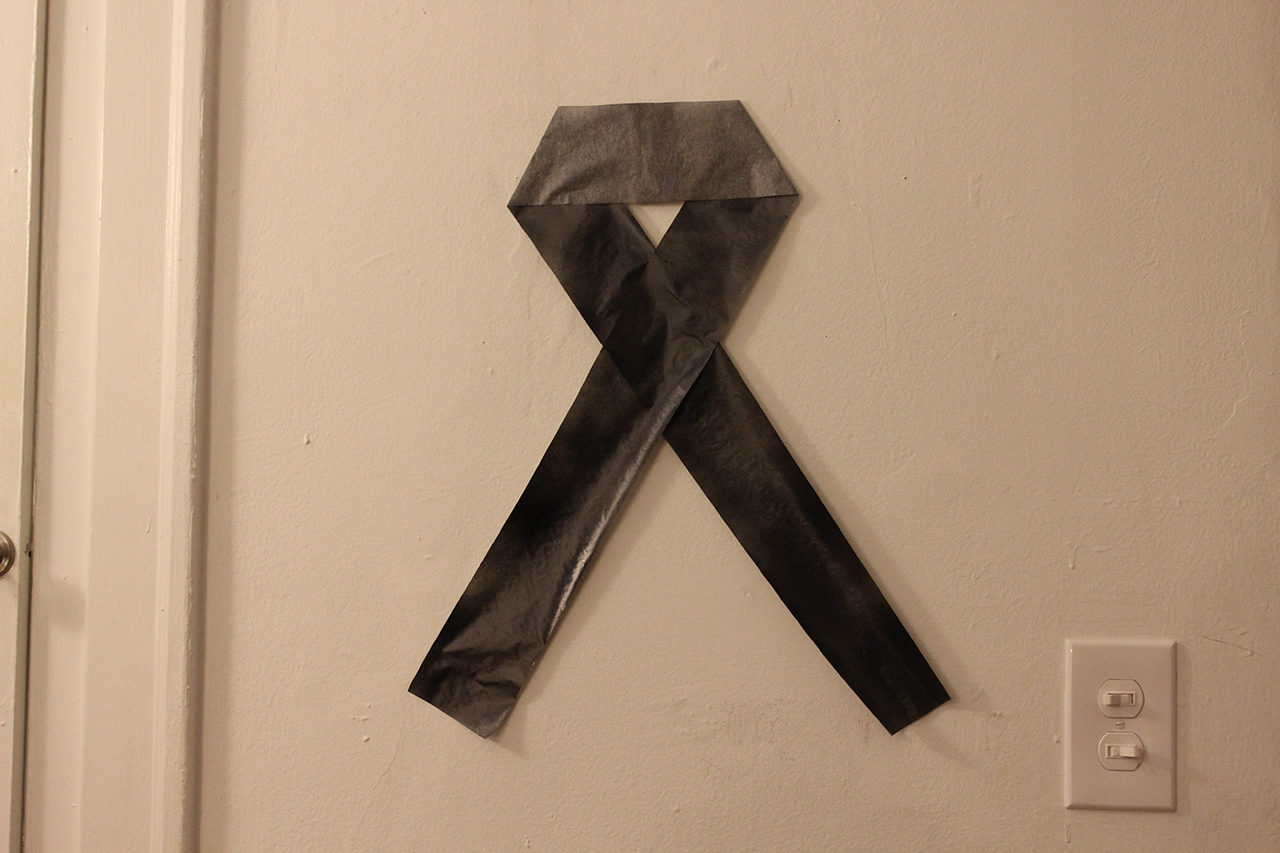