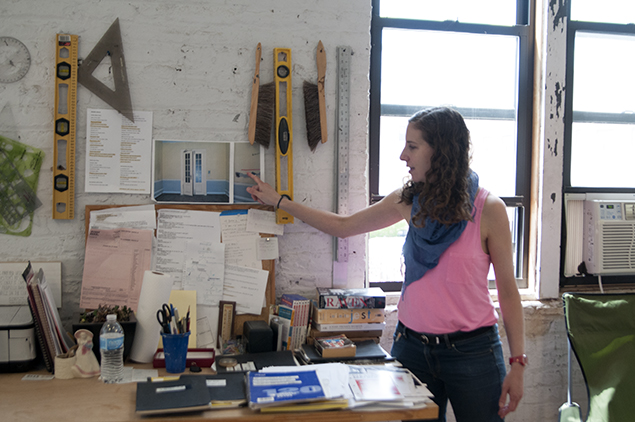 Deb works with the mysteries weaved into her own life, the bizarre misalignments that others might overlook. Fact informs fiction, mixing the two elements into a strange connection that cannot be untangled. Deb’s sunny studio in the far West Loop provides a perfect location for her endless people-gazing, large windows providing the vantage point for the train tracks and travelers who traverse on them below.

I\W: How do you use color to present your storylines?
DS: Color is a tough one for me because I want to go and incorporate every color in the rainbow. I want to do everything, and yet it has to somehow integrate into the story in a way that doesn’t seem superfluous. I have been trying to mimic blueprints lately, and there is some level of color coding with my text. I have a main, secondary, and tertiary voice. The primary text is what’s happening—what you observe and the general gist of the story. The secondary level of text is the more subjective, and the third level of text is the deepest and darkest, it is how it really is for the viewer.

How much of your stories involve fact, and how much are pure fiction?
Everything is based on some level of truth. I can’t make up a story, I wouldn’t know how. It always has to be based on something. I get confused the further I go with where the line is—it is all gray zone to me. I did this project about the Denver International Airport where there is a whole conspiracy about it being the headquarters for the New World Order. In a short span of time it has become a really mainstream conspiracy theory, and there definitely is some truth to it. I am not a conspiracy theorist, but I am intrigued by conspiracies— mostly by the ones that are funny. You have to step out of conspiracies, have some self-awareness, and not get so wrapped up in everything. With the Denver Airport theory I was more interested in how other people were evolving this into side theories in such a short span of time. 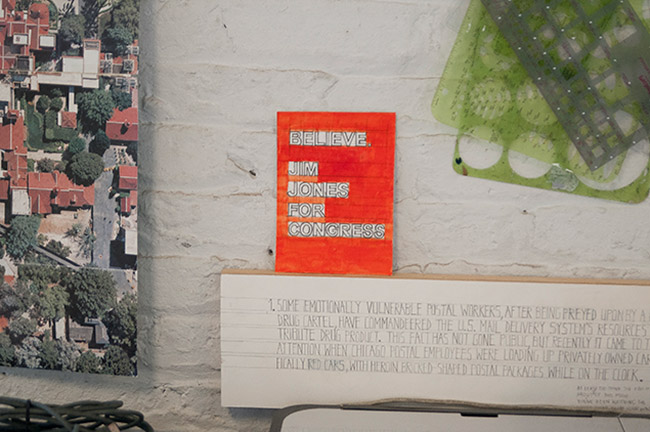 Are your pieces produced by the narrator? Are they objects that would live within their home, or are they your filter for the narrator’s work?
I don’t know. I think about it, but I don’t have an answer. I always go back and forth on it. If the narrator was truly in charge of everything, it would be sharpies and cheap paper and highlighters, there would be no page layout. It would be really rough. I know that it is not necessarily the narrator who is choosing the way that something is going to look. Other times I think they are choosing it because they want it to look like it has some level of authority. If you ever read some sort of manifesto, it will look very official. I think about it all the time, but if I get so caught up in what the narrator would actually do, if they were actually this person, I feel like it would be too easy. It would become a bulletin board, which is almost too expected. 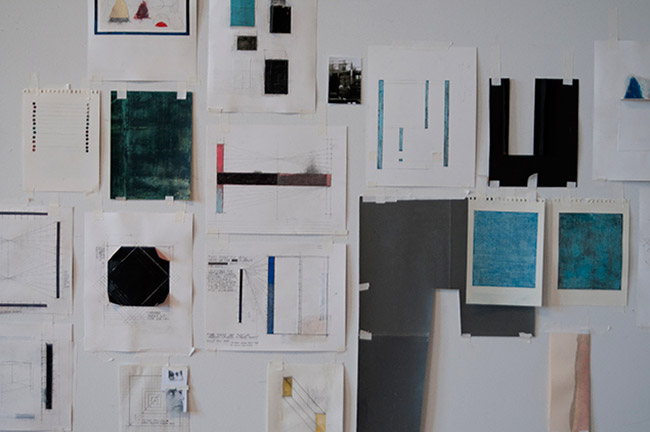 Are your eraser marks your way of putting your own touch within the voice of the narrator?
The eraser marks are the narrator, the self doubt. It definitely comes from the narrator. It is so hard to say that I am not the narrator, but I am writing in the narrator’s voice. It is fiction, you write in the voice of a character, but it has some level of autobiography. It is technical. If I am writing something and I don’t like how it looks, or it doesn’t sound right, or it is not legible enough, I have to get rid of it and redo it. It is definitely a writer’s process. At first I develop it on the laptop, print it out, and then I place it next to the piece so I know what is primary, secondary, and tertiary text. If I think the text doesn’t look right, I rewrite the draft in the top right corner, and then erase it or white it out. Then I redo the original text, and erase the draft. I use the surface as my draft, as well as the final. I call it the “plumbing” behind the piece— the thought process and visuals of something in flux. It is never totally right. Maybe it is never in the spot where I want it to be. 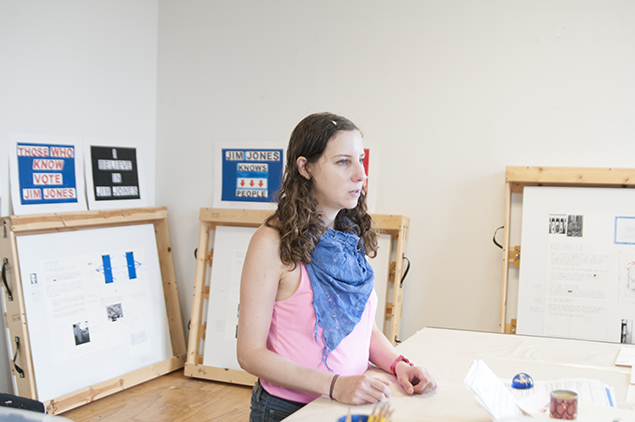 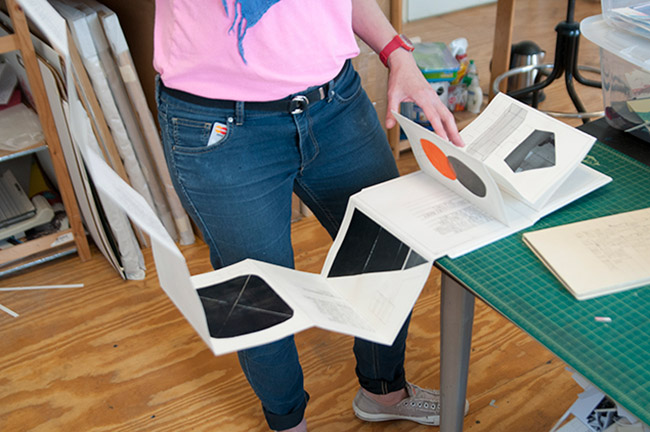 How did you develop the block-style of your lettering?
It used to be taller and written with pen and ink or a thin brush, but it was looking too much like somebody else’s voice. I have this background in graphic design, and I have always wanted to be an architect, so I kept thinking I wanted to channel a more architectural writing and use pencil. That is where that comes from. I also use a straight edge for every single letter—it takes forever.

Is your lettering also a way to keep your narrator gender-neutral?
Yes, because I don’t want it to be a woman’s story or a man’s story, I just want it to be a story. That’s definitely part of it. They are also blueprints for a larger scenario. They are clean, maybe some more than others. Even when it is clean, it is still on some level rough and on purpose. 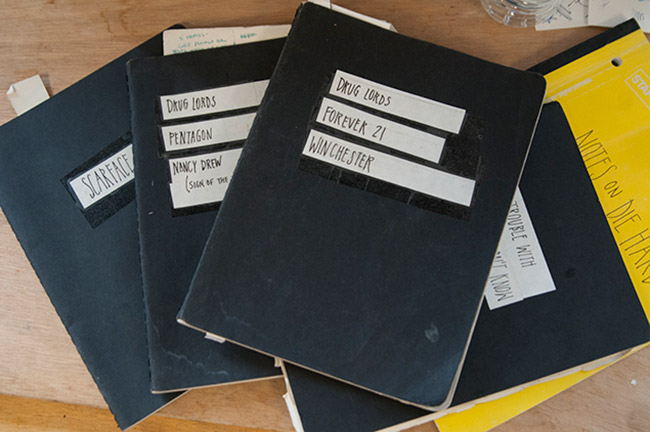 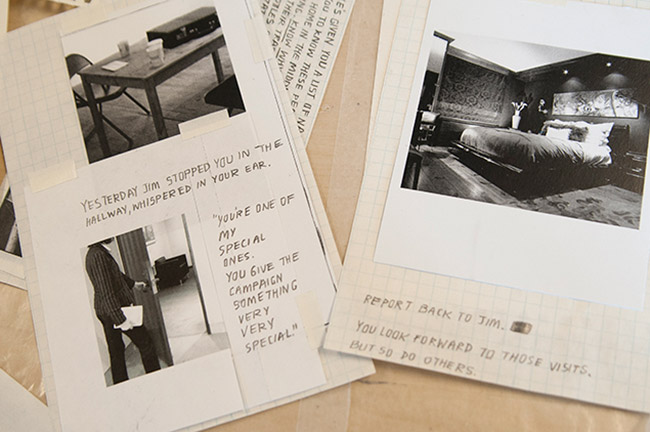 Are there other ways you ensure that the narrator remains gender neutral?
There is never a name, and there is never a love story. Although you might think someone in the story is attracted to you, it will be a man in one story and a woman in the next. You also don’t entirely know how old the person is. There aren’t enough clues. 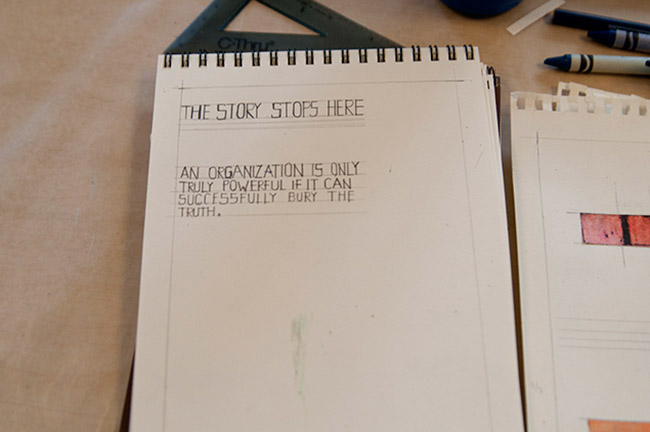 Do you intend to keep producing larger-scale conspiracy pieces?
I am at this point where I have been working in this vein for 10 years, and instead of starting another long, huge project that would take two years to research, think about, and do, I want to reflect on my last 10 years of writing. There are so many avenues that I didn’t go down, so many edits that didn’t happen. There is all this text that I could use and could incorporate into some small, discrete drawings. I am going to a small scale now. It is a temporary scale down, but it is so much more fun in a way to go back and think about visuals. With very simple media I am trying to fake blueprints. For the last 10 years it has been a pretty great and stressful period where I would always come to the studio because I had to meet a deadline. This really became a place for deadlines and work, and I didn’t like that feeling. I decided that I needed a breather, and I needed to find the joy of color and surface and shape and go back to the very basic. I love doing this, I love finding out what happens when I layer and erase and think about the alchemy of very basic materials. Those are the things that I am having a ton of fun with. I am really focusing on the visuals and thinking that I will always be able to match something with an image, but I am not going to worry about the text. The text will not lead and decide what the image is, the image will decide what the text is. I am reversing.