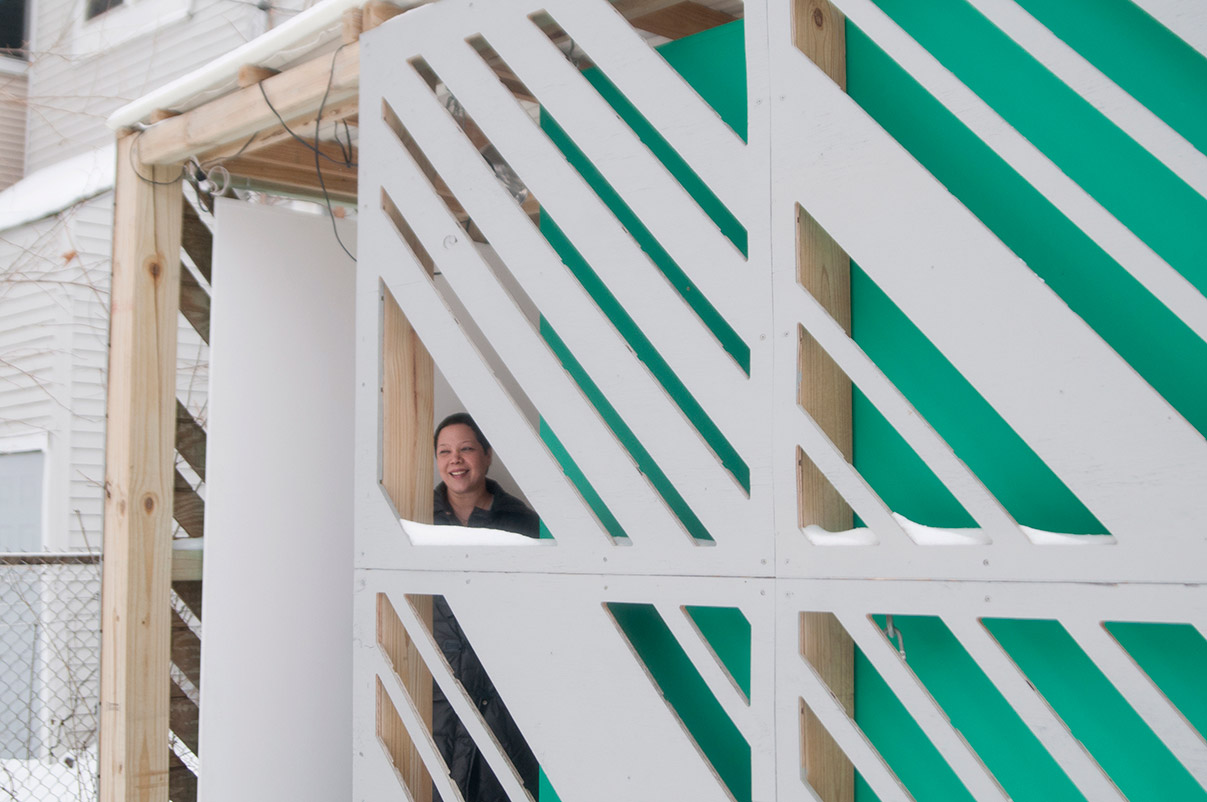 Edra is a conceptual artist working out of her home in Garfield Park surrounded by two dogs, several masks, and an array of work that her and her husband have collected over the years. It was this collection that was a major piece of inspiration for THE FRANKLIN, an exhibition space and free-standing structure existing just behind their home.

I\W: How was THE FRANKLIN conceived?
ES: I got invited to do an exhibition at Northeastern Illinois University and I asked my husband to team up with me because he had been helping me fabricate my work— I was interested in what was going on in-between us. We had a year to have conversations about the exhibition. I feel that a lot of my involvement in Chicago has been with artist-run spaces. Thinking about that, it was the initial part of this project. We have gathered a lot of work through trading with friends. That set the tone for this project. We decided to create a space and exhibit part of our personal art collection in it. That was how THE FRANKLIN started. Somehow you have the need to have art in your house, other artists’ work. It is an impulse.

Can you explain your piece “Excess of Joy?”
It is a diptych of two laughing faces—double joy, or comedy. People always tell me about my laughter, which is something I never hold back. I started thinking about it kind of playfully. I thought that maybe I could integrate that into my work and see what it means. I did a recording of my laughter that is going to be a part of my upcoming exhibition. 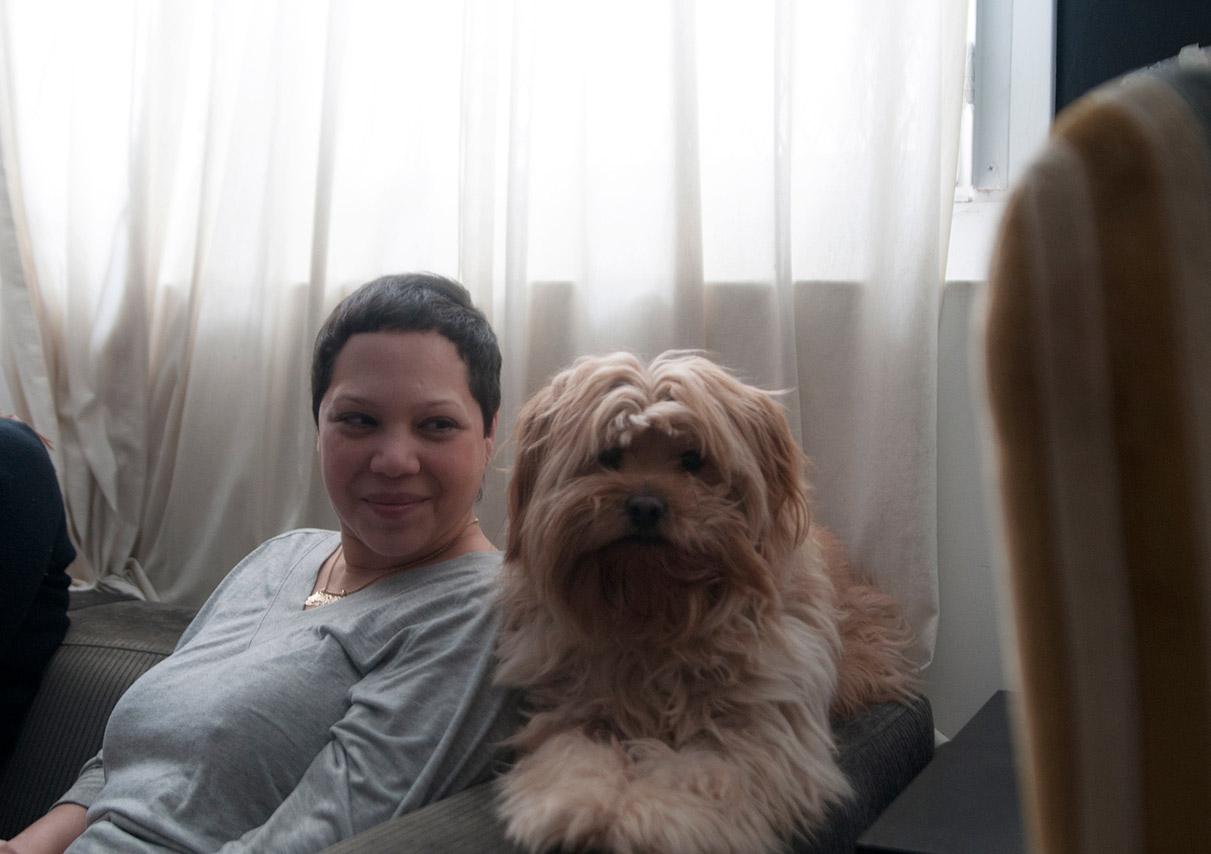 What did you use to help evoke your laughter?
I used…Eddie Murphy. I needed something that would motivate me to laugh. I wanted it to be very open and honest—not trying to force myself to laugh. I cannot watch RAW without laughing. It was pretty easy. I looked for it on YouTube and used some headphones so you cannot hear anything but my laughter. I listed to all the laughter that I recorded and it was rhythmic—I could make a composition with all the sounds that would be cohesive. The composition is about two and a half minutes. The record is going to have the same recording on the front and the back to keep with the drawing and diptych. They are for a show that I am having at Trinity College. 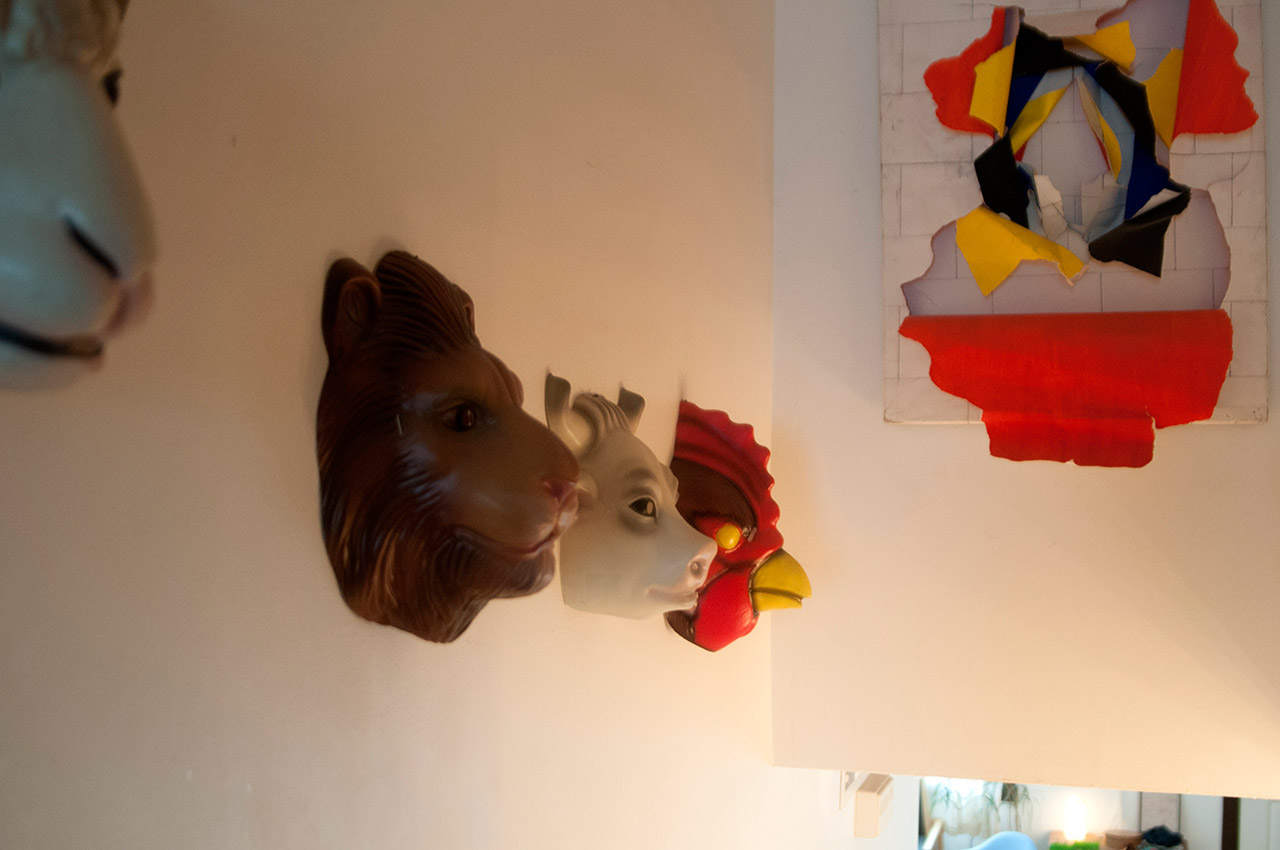 What is the process behind creating your masks?
I use gouache and different tones of black and graphite. They are very simple. I try to use very basic materials to make my work.

There are always questions about identity and culture, but I think I got to a point that I feel comfortable using these things that are a part of my upbringing, my language, and my culture and celebrating them.

What are the similarities between the masks and shells you have been making?
They both contain some kind of organism and are also mythical and Caribbean. I am very enthusiastic about Caribbean aesthetics and African masks and art. I really wanted to bring that to my work. I just decided to not be concerned about it and let it happen. There are always questions about identity and culture, but I think I got to a point that I feel comfortable using these things that are a part of my upbringing, my language, and my culture and celebrating them. The masks started coming into my earlier work in relation to Iris Chacón. She is a very interesting woman because she really incorporated the Puerto Rican identity in her show. She is kind of over the top and crazy excessive, but she was not just a body—which is usually how women in Latino television are portrayed. A lot of Puerto Rican friends from my generation know who she is. It is fascinating to revisit this as an adult when you know what you are looking at. 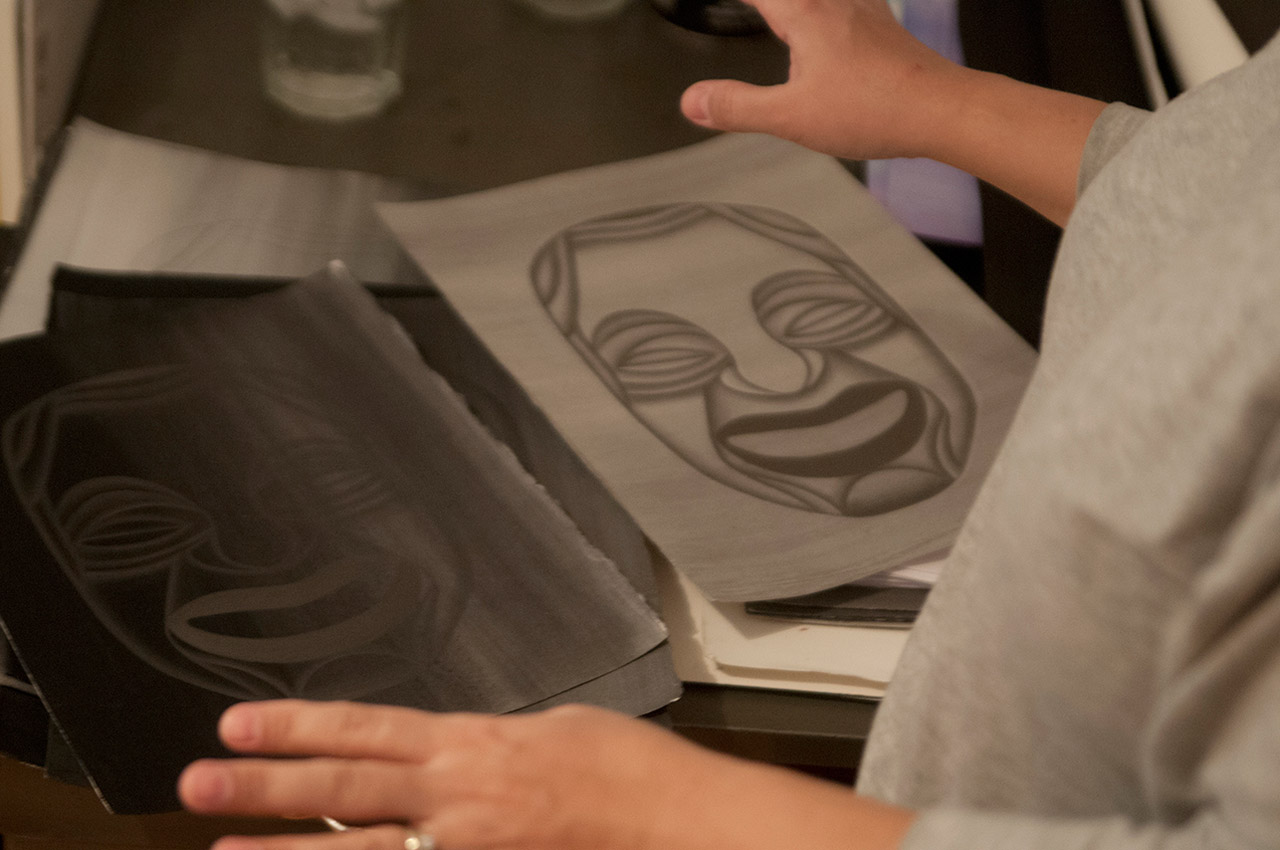 What is the attraction to the animals that you use in your work?
I had a series called The Greatest Companions. It is kind of complicated, but it all comes from this relationship with my dog Foster. I found him in the alley when I was going through an illness. I had an operation and when I was in bed for a month he became really passive and a great companion. I did this whole series that was breeding the world of Iris Chacón with my own world. I kept thinking about her as a personality and also thinking about myself and using this as source material. I didn’t want people to think that I wanted to be like her—I was motivated by her strength. She is insane. She is like fire. I kept thinking about this relationship between the beauty and the beast. 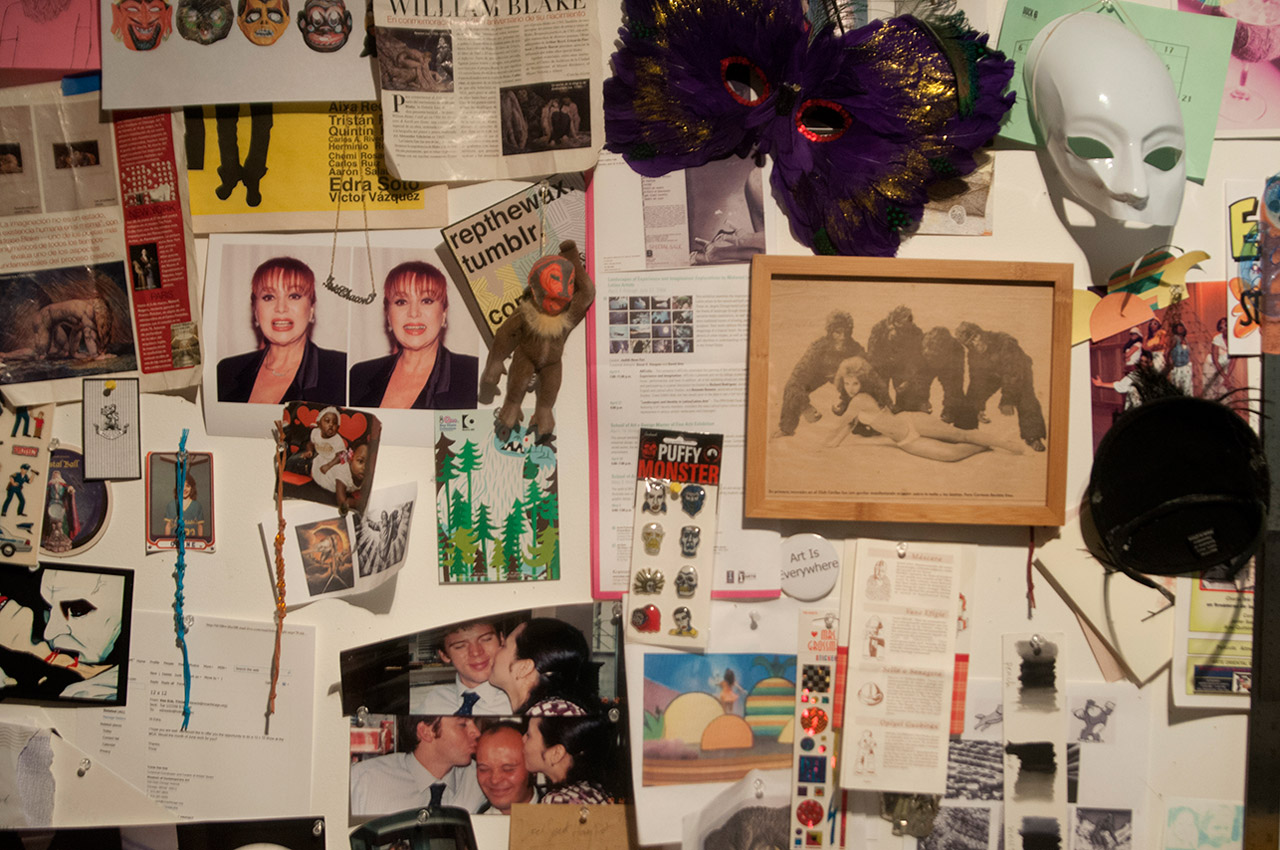 What is a more recent piece of work you have been working on?
I have been doing these fences that come from Puerto Rico. I feel that now I am branching out a little more with the designs and using them a little more loosely, not trying to copy them as much. I am trying to find public places for these fences. I have made them through my husband and the shop where he works at Dock 6 Collective—which is a collective of furnisher designers and fabricators. I use the CNC machine, a machine that cuts the wood in the way I need. I have a friend that makes the renderings of the designs that are compatible to that machine. I also need help installing the fences, so it is a production. 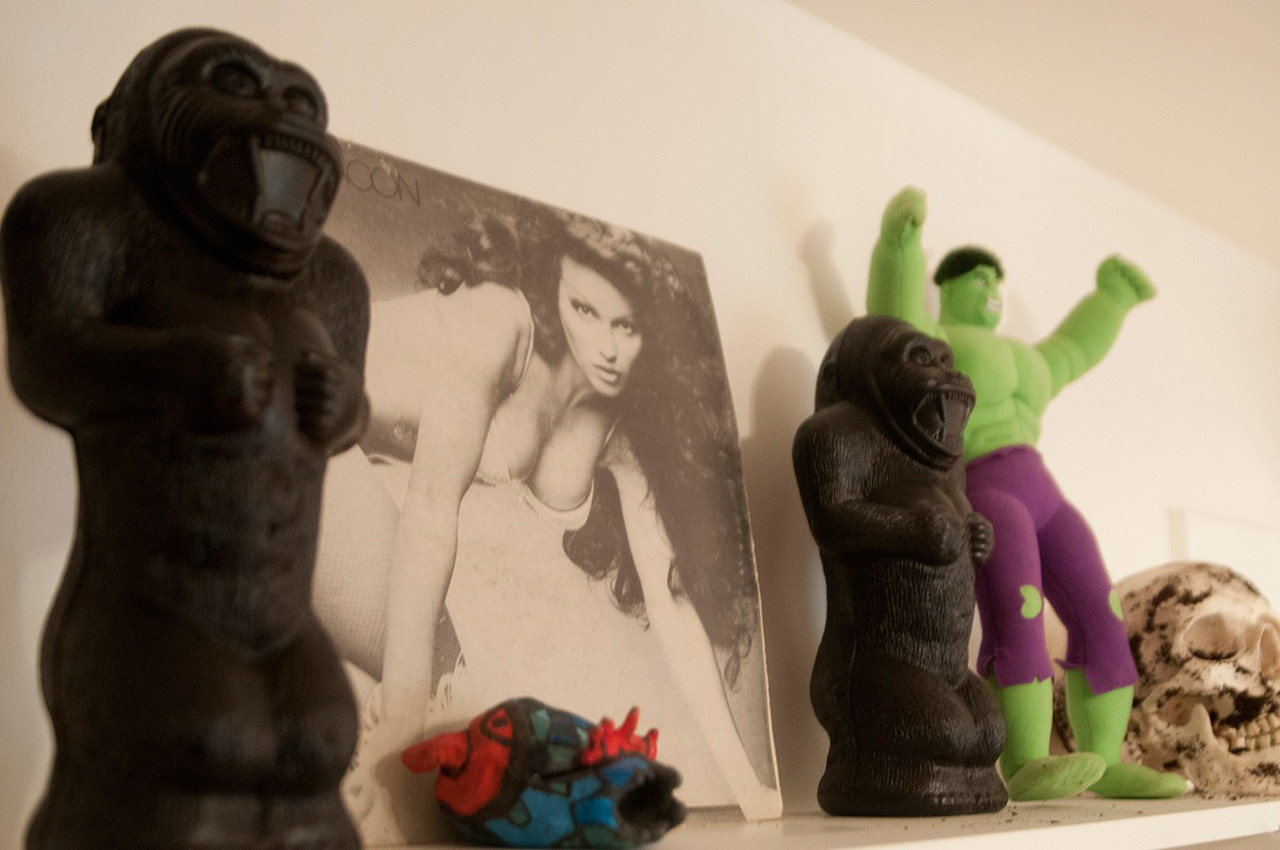 What is the symbolism behind your fences?
I don’t think about symbolism, I think more about the transformation that the fences bring. The first thing that really got me interested in the fences is the geometry, the shapes. I felt that when you remove them from their original place they start speaking. You look at it and you feel as if it could be from anywhere. I like that, and feel like it has a lot of potential. That was the first thing that made me believe that this project could exist, and there are a lot of things you could say about it. I am working on proposals for this project—I asked my brother-in-law who writes about politics if he could write an essay about it. I asked him what it means to fence a place in the United States with a Puerto Rican fence. 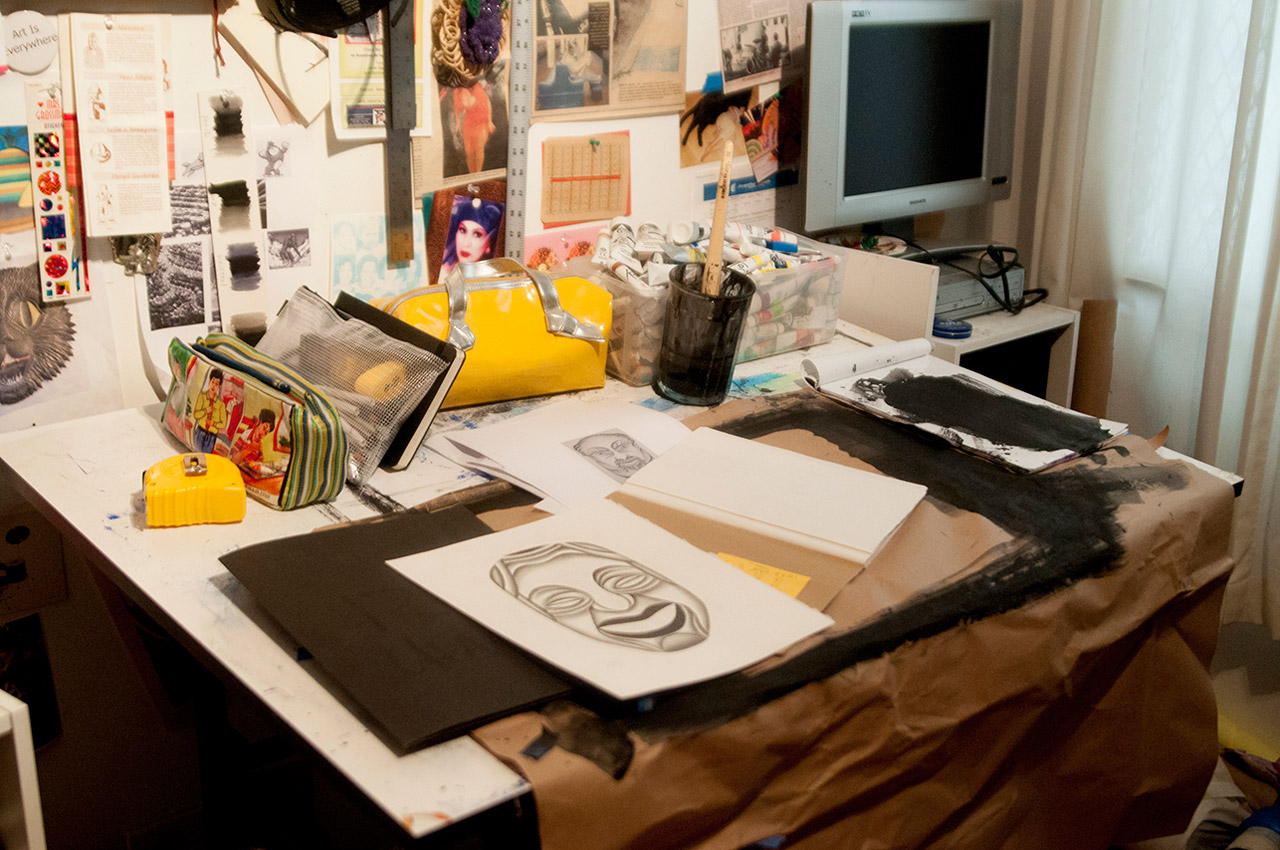 Is “Graft” just the title you gave to your fence at Terrain, or is that an idea that you want to bring to more exhibition spaces?
I was thinking about transplanting and “graft” is a word that came up as a possibility to name this project. I had my doubts about it because it looked like it could point in a different direction. I think it works, so I have kept it. The fences have a lot of potential because of how they become something else when they are removed from the original context. They imprison and they decorate. I feel confident that there are so many different ways of reading them. One thing that I feel that they achieve by themselves is that they look like they belong in the space where they are installed. I wanted them to disappear in a way—I wanted them to be a part of the structure and the architecture of the space. I didn’t expect that they would translate so well from what I wanted to do. You make something and you hope it says exactly what you want it to say, and then it actually does!