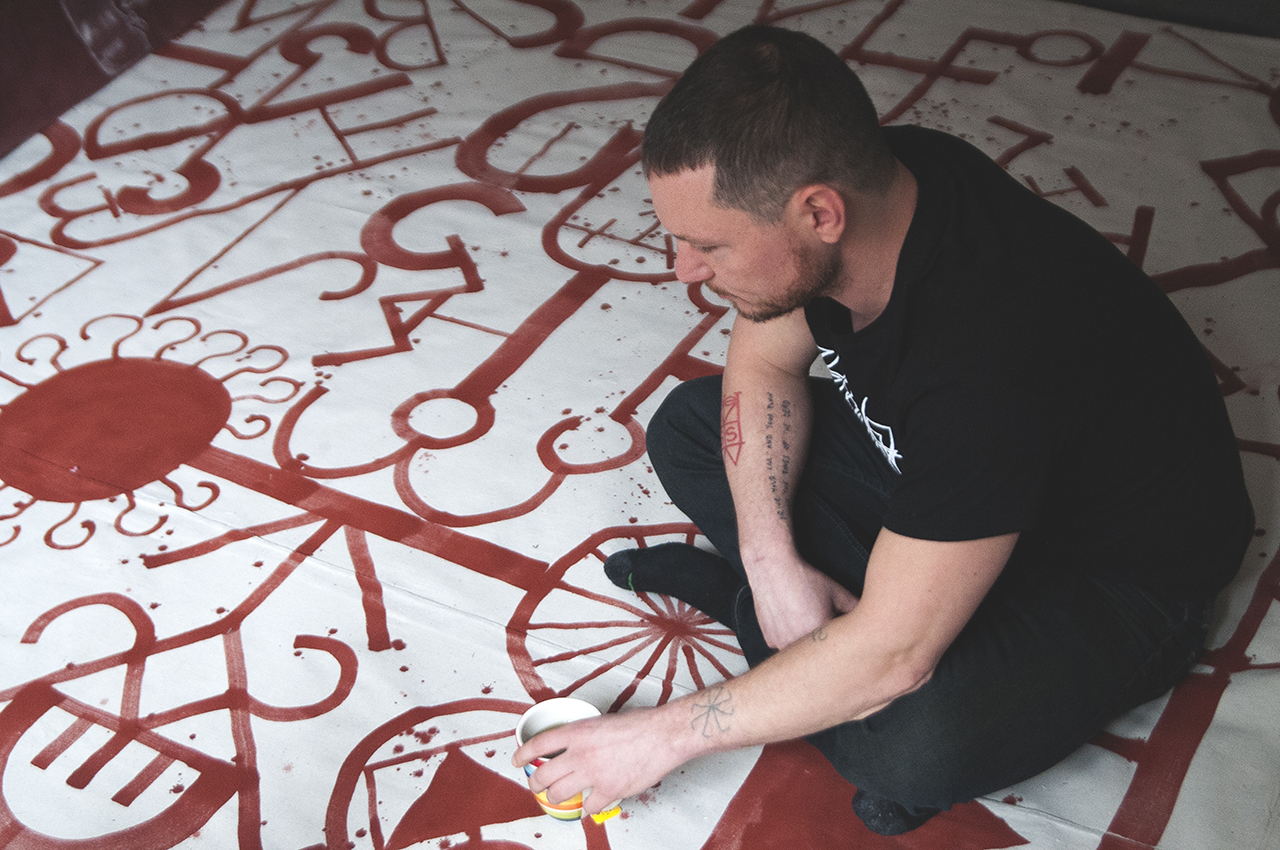 Focused on sigils, Elijah turned his drawings into portable ritual spaces, a way to propel his images on paper into real space. His history of experimental rituals now informs his large, drop cloth paintings, charging them through the act of making each work. Focusing on a specific group of symbols at a time, Elijah allows them to fall out naturally as desires and worries emerge or evolve.

I\W: Can you give a brief history of how you found the occult symbols that you use in your works?
EB: When I was in my early 20s I was interested in Thee Temple ov Psychick Youth, which was a cult invented by Genesis P-Orridge who was in Throbbing Gristle and Psychic TV. The cult combined interests from industrial music, and later rave culture, with elements of chaos magic. That is where I first encountered sigil magic. My interest went underground for a bit, but I started experimenting with it again after grad school under a confluence of influences. The influences included Coil and Scott Treleaven’s show at Kavi Gupta about the Salivation Army, a queercore chaos magic zine. There was a lot of queer occultism in the air, and I was following all of those threads and sigil magic kept popping up. When I first started drawing them it was a little bit of a joke because of the way that one charges a sigil is to visualize it during the moment of orgasm. I liked the idea of giving abstraction a sexual context. Then I just really enjoyed drawing them and became more invested in the occult systems that they belonged to. 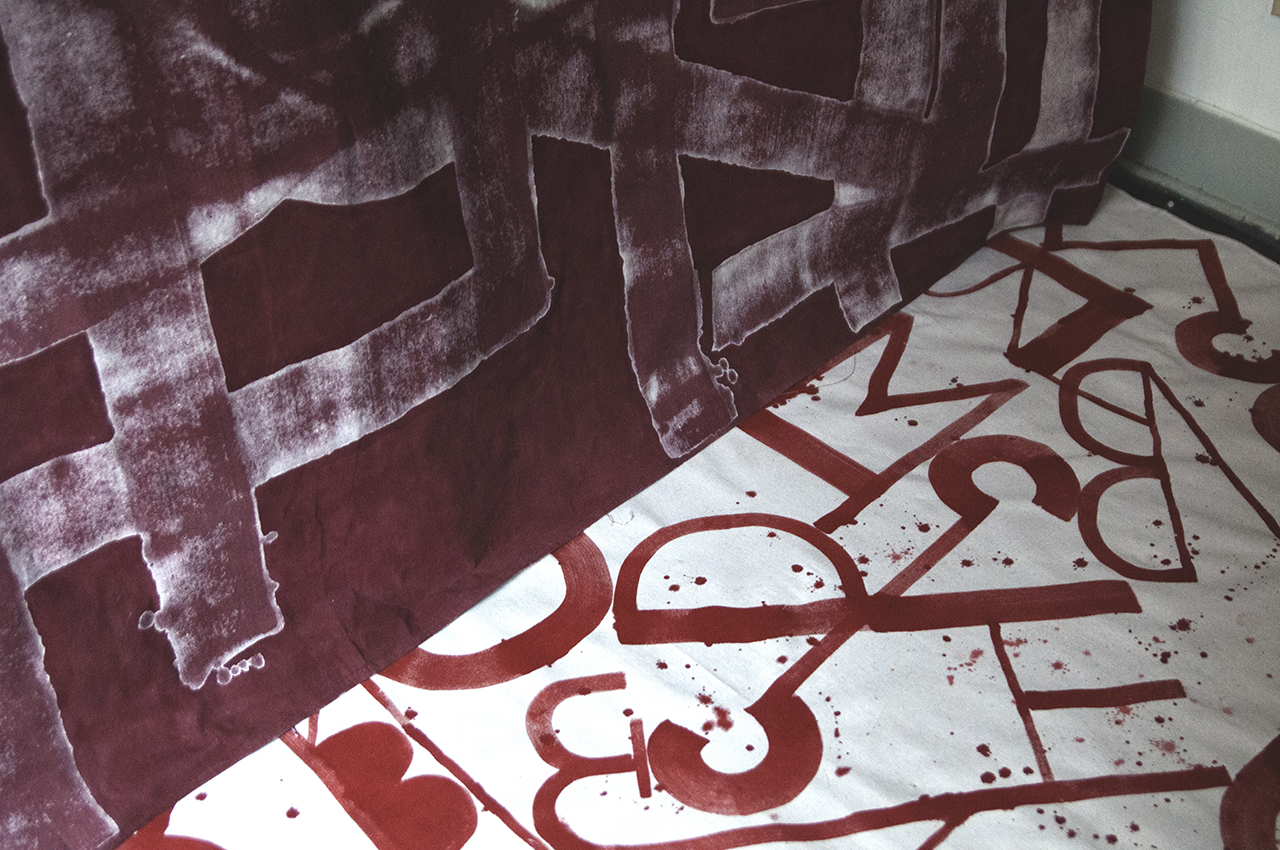 Did your drawings then morph into the drop cloth paintings?
I started doing experimental rituals in my studio, using drop cloths as portable or collapsible ritual spaces. These rituals were based on things I was reading, but also the drawings I was making. I wanted to do in reality what I was imagining on paper. The rituals consisted mainly in painting the drop cloth, creating the ritual space, plus a handful of other gestures. I started to like the results, and began thinking about ways they could exist as works alongside the drawings. I don’t banish the four corners or ejaculate on the symbol each time I make a painting. Now that history provides a context. 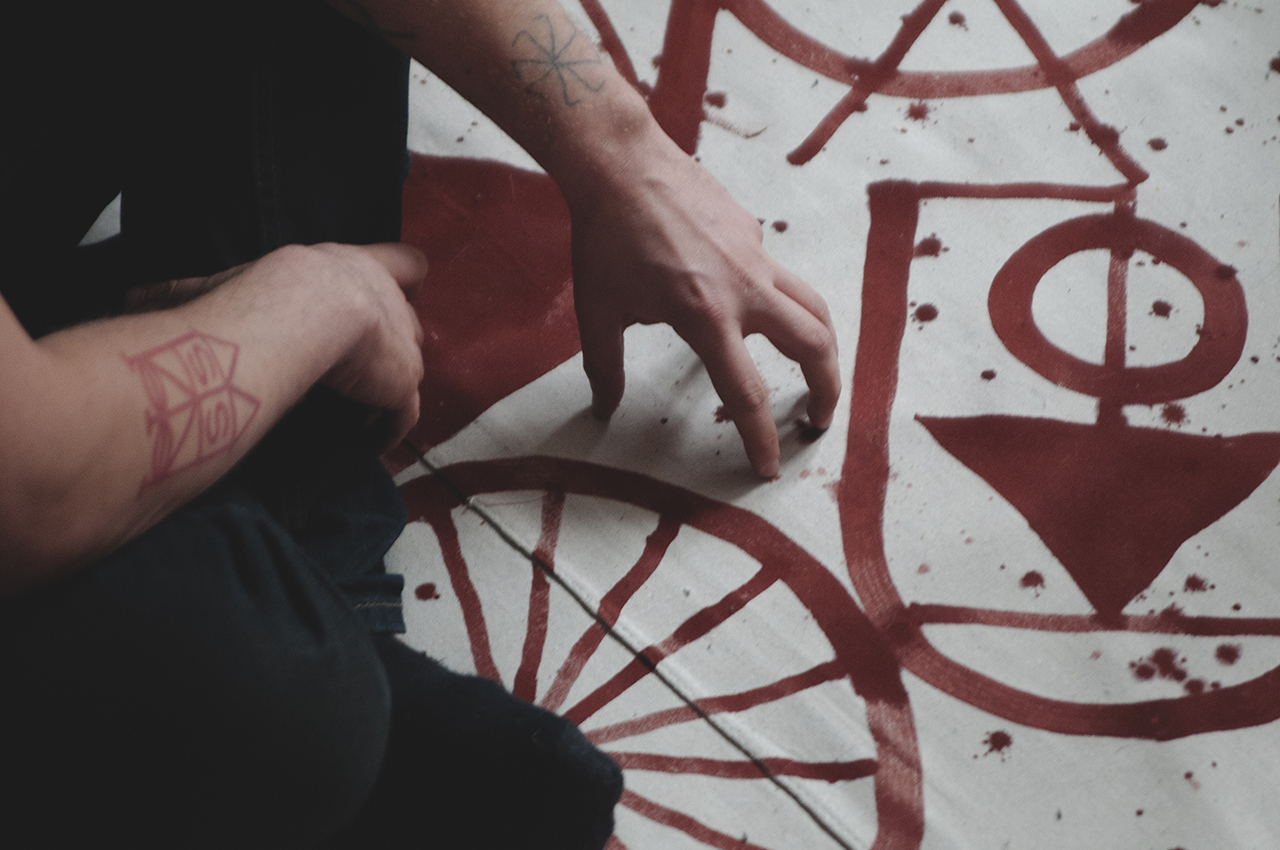 Where do you get the content for each of your sigils?
The content largely comes from private wishes and desires, although I also have other symbols on which I’m working that I didn’t arrive at using the prescribed method of symbolizing a specific desire. There are a set of solar symbols loosely based on the black sun and solar anus. The black sun is an alchemical symbol, a paradox, a sun that sheds darkness rather than light. The solar anus is a concept of George Bataille’s, the renegade surrealist. I also have a set of forms that loosely combine the lineaments of a face with anal asterisk forms that I’ve been calling “demons.” I’ve been doing a lot of writing about those, trying to figure out what they might mean.

Do you feel like the viewers’ eyes are helping to manifest the sigils you produce?
No. I think my pieces are charged by their careful making, but I don’t think that the viewer looking at them necessarily activates them. I think of the work as having two or more faces, one of them is magick and the occult, one of them is the visual art, and then there are other more secret or difficult to describe faces as well. I have made sigils for other people, though. They give me either the actual wish or desire, or just the letters (you construct them by using the letters from the wish or desire). It is then up to them if they want to charge it or not. The mechanics behind sigil magic is all discredited science—it is make-believe! But there is also a kind of realness to it. Magick and mythology, for me, more persuasively describe and influence all those psychic states and mechanisms that are the territory of psychoanalysis.

Is your color palette related to the sigil’s content?
Sometimes, but for the most part no, definitely not in any programmatic way. When I first started drawing sigils, the paintings that I was making were figurative ones of naked men in the woods in vaguely mythological situations. The boys were red and purple and green. The sigils gave me an avenue in which to explore color apart from representation, and then the representational work got nominally more realistic. The color in the sigil paintings is motivated, but not systematic. It’s probably better to cite an example. This past summer I made a painting called “Eden, repeat” in which I lifted the palette from a painting by Hilma af Klint. I also frequently use red, blue, and green, the three primaries when mixing light, because of the solar-anal imagery—dirtying them up to give them an excremental tint. 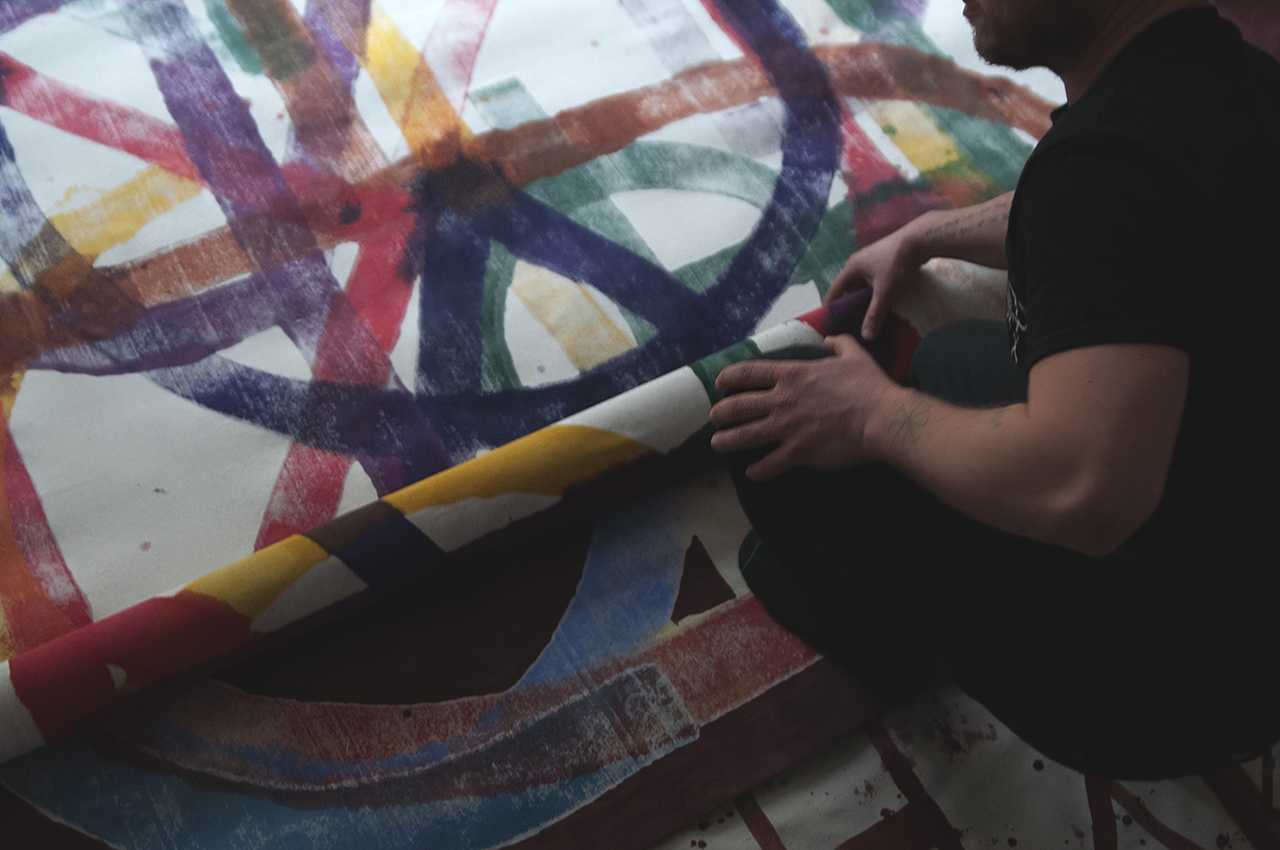 Once you have created a sigil does that release you from your wish or desire?
I wish it would release me more. Every so often, I will abandon the symbols I am working with and create a new set. This happens naturally as desires fade out, emerge or evolve. Any given set reflects what I am generally worrying about at a given time. I think of them collectively as being an alphabet of desire. I can’t take credit for that, it is Austin Osman Spare’s phrase— the early 20th century Occultist that invented this version of sigil magic. Usually the set is a dozen symbols or so, but right now I am working on a more involved project and there are more than 20 that exist in clusters.

I think my pieces are charged by their careful making, but I don’t think that the viewer looking at them necessarily activates them. I think of the work as having two or more faces, one of them is magick and the occult, one of them is the visual art, and then there are other more secret or difficult to describe faces as well. 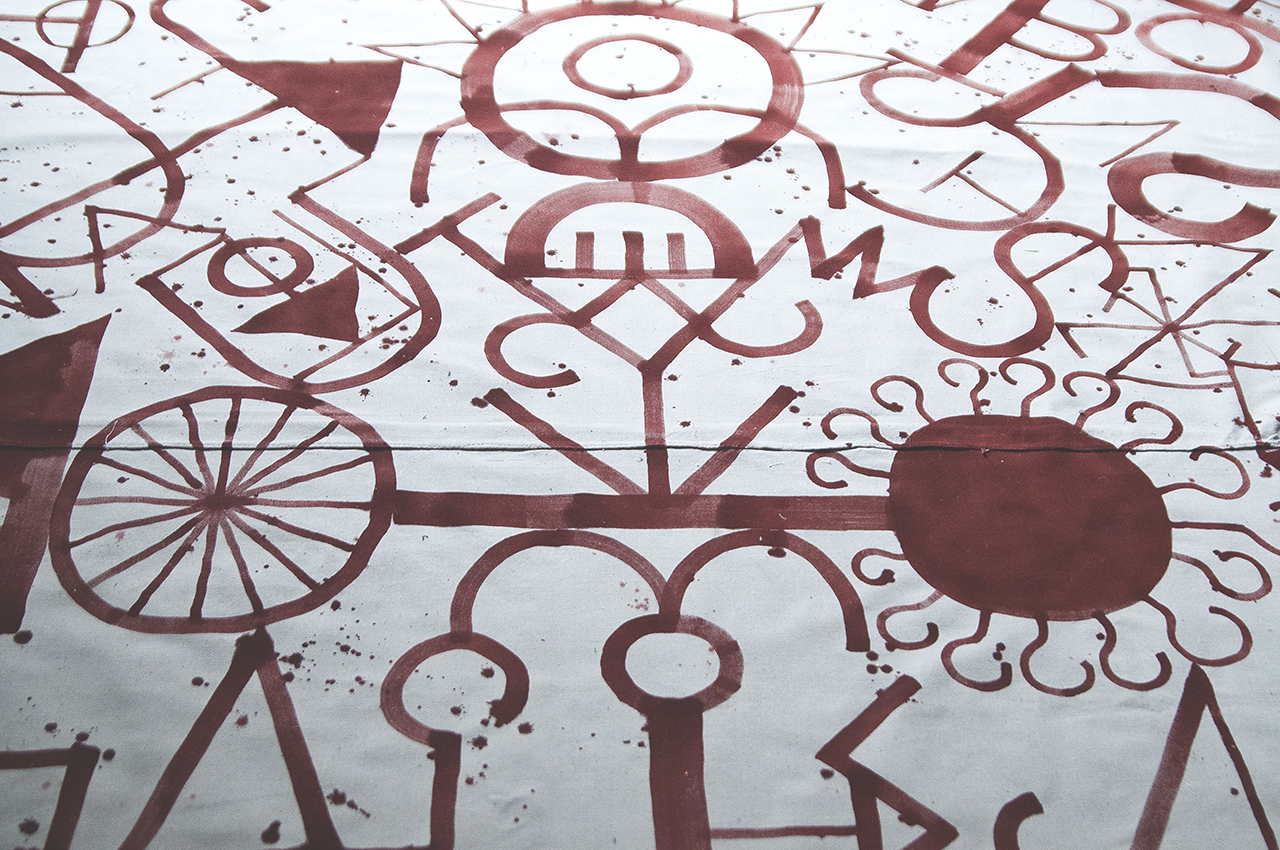 Can you explain your portrait series?
In my last show at Western Exhibitions there were two straightforward portraits, one was of the devil and the other was of John Balance, the lead singer of Coil. After I finished the show I regretted it wasn’t just portraits and drop cloths because I thought there might be a purity to that gesture, just faces and symbols. All the portraits are of friends, lovers, or heroes— artists and writers from the past that I wish were friends or lovers. The portraits I am working on now are ostensibly members of a cult I am inventing which basically cobbles together the various interests I’ve been pursuing since about 2008 or thereabouts. They are called the Bachelors of the Dawn. 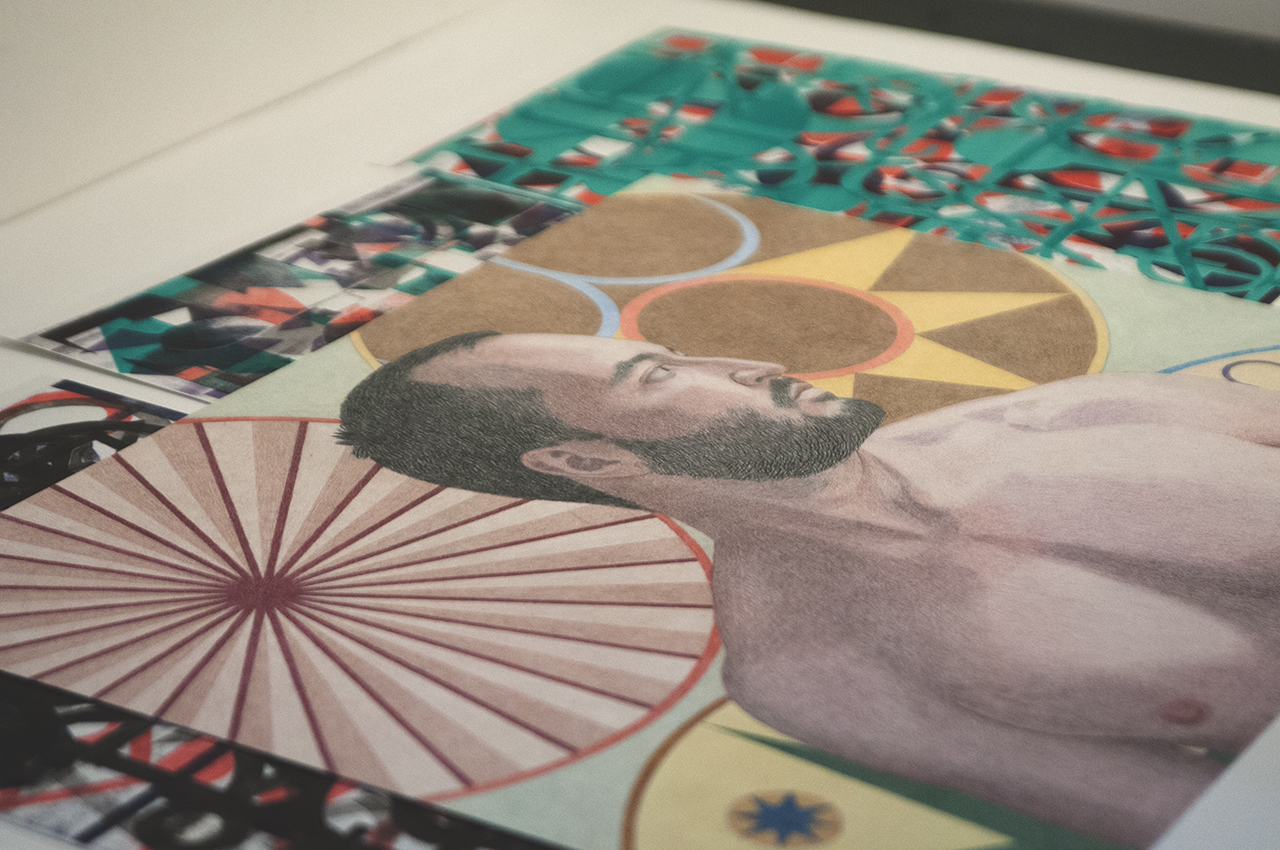