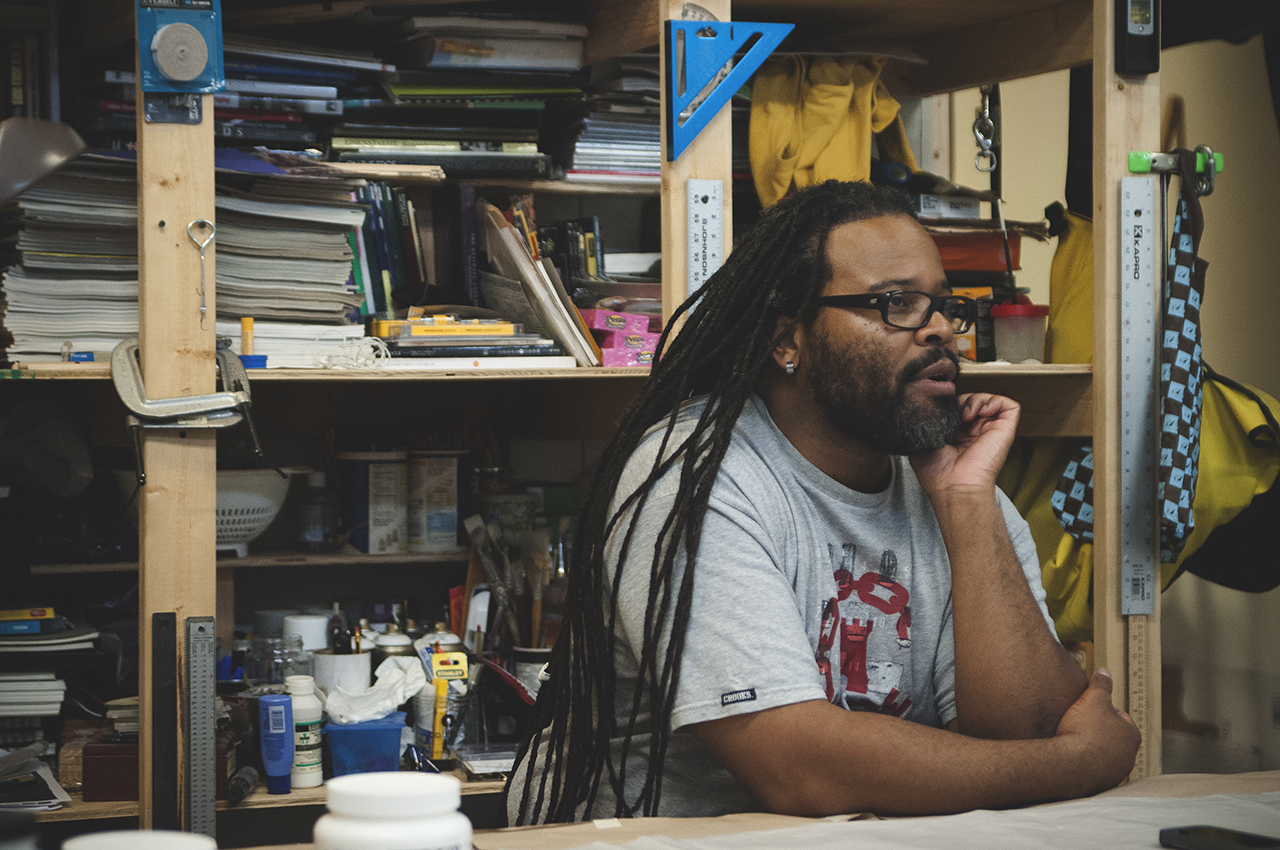 Enlarging and compressing images he takes of textures on the street, Esau creates photographic collages that explore environments of which we all traverse. By repeating their way through several iterations of collages, the images mimic the subject in which they are derived and layer their own experiences in a similar fashion to the textures they contain. Recently Esau has moved into a project focused on insistence, using found materials to supply the content for his now colorful compositions.

I\W: Why did you decide to transition from photography to creating image through collage?
EM: On the most basic level— I was broke. Lack of finances will do many a thing for an artist. When I came to Chicago I wanted to continue making really good photographs, but I just didn’t have the money to do that. I started to look at myself as the photographic medium but sans camera. I think collage for me is something that works extremely well for that. It goes hand in hand with photography and painting because all of these things historically evolved together. Photography stems from the mother, which is painting, while collage was always there as this redheaded stepchild. And by that I mean the medium of collage has been viewed historically as a “cute” and odd form of expression. Not to take anything away from painting but the use of collage or “pasting papers/materials” has quite possibly been the medium that best questions social constructs that exist in art and society. I am really going back to bringing the photographic image into my work, but in a very different way. It’s not about the photograph itself, but it becomes delineated further— a further removal through enlargements of the photograph that I incorporate back into the collages. To me it is extremely important that the elements are removals from the actual photograph so the language can keep moving forward. I want my formal work to have a conceptual base. 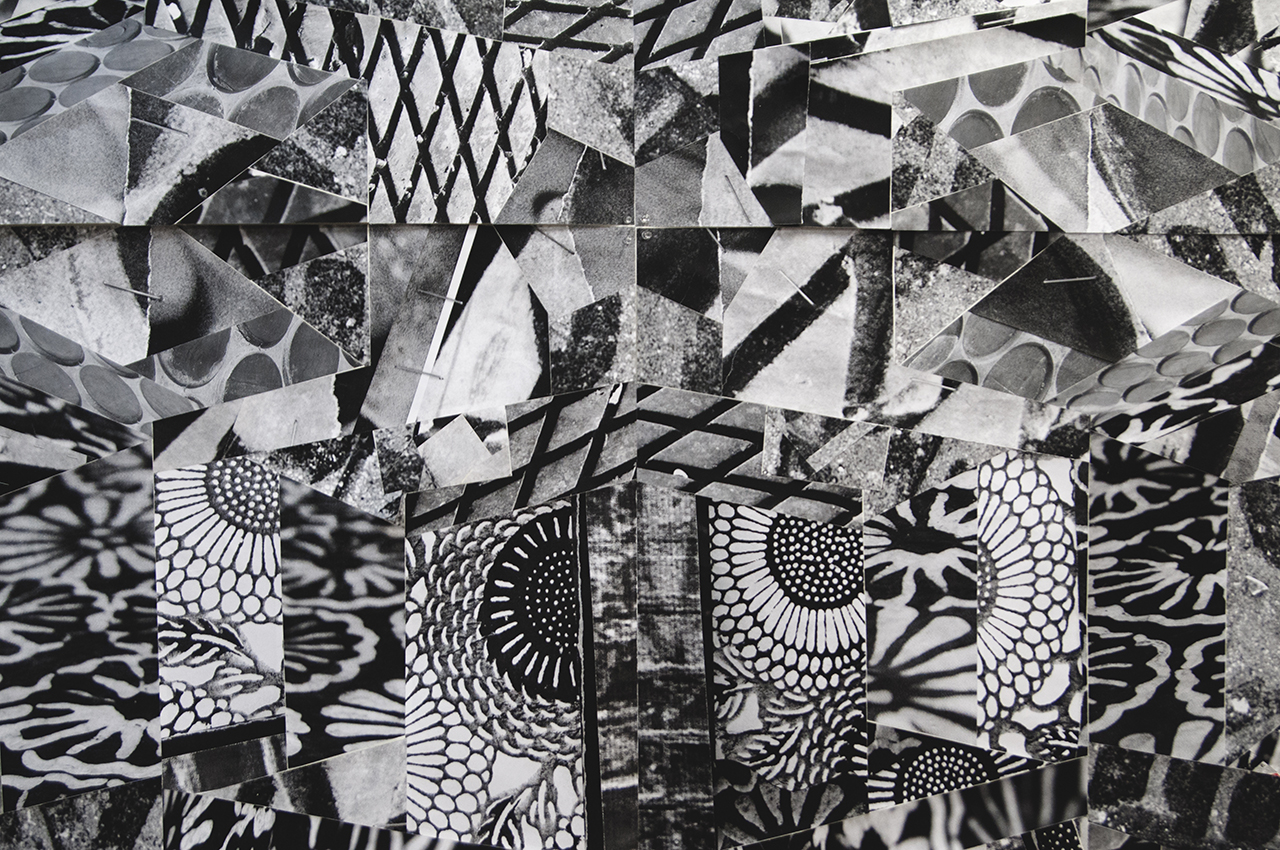 How do you regenerate your imagery into future iterations of your collages?
If a collage is in my studio long enough it will end up living in a new work, a new form. They become detailed and compressed, detailed and compressed. It’s almost how trash breaks down and becomes part of the soil again, it continuously becomes a part of the creative process. I’m not totally sure of how important walking anyone through “the process” is. I’m really trying to get away from conversations about process in my work and move instead towards language. 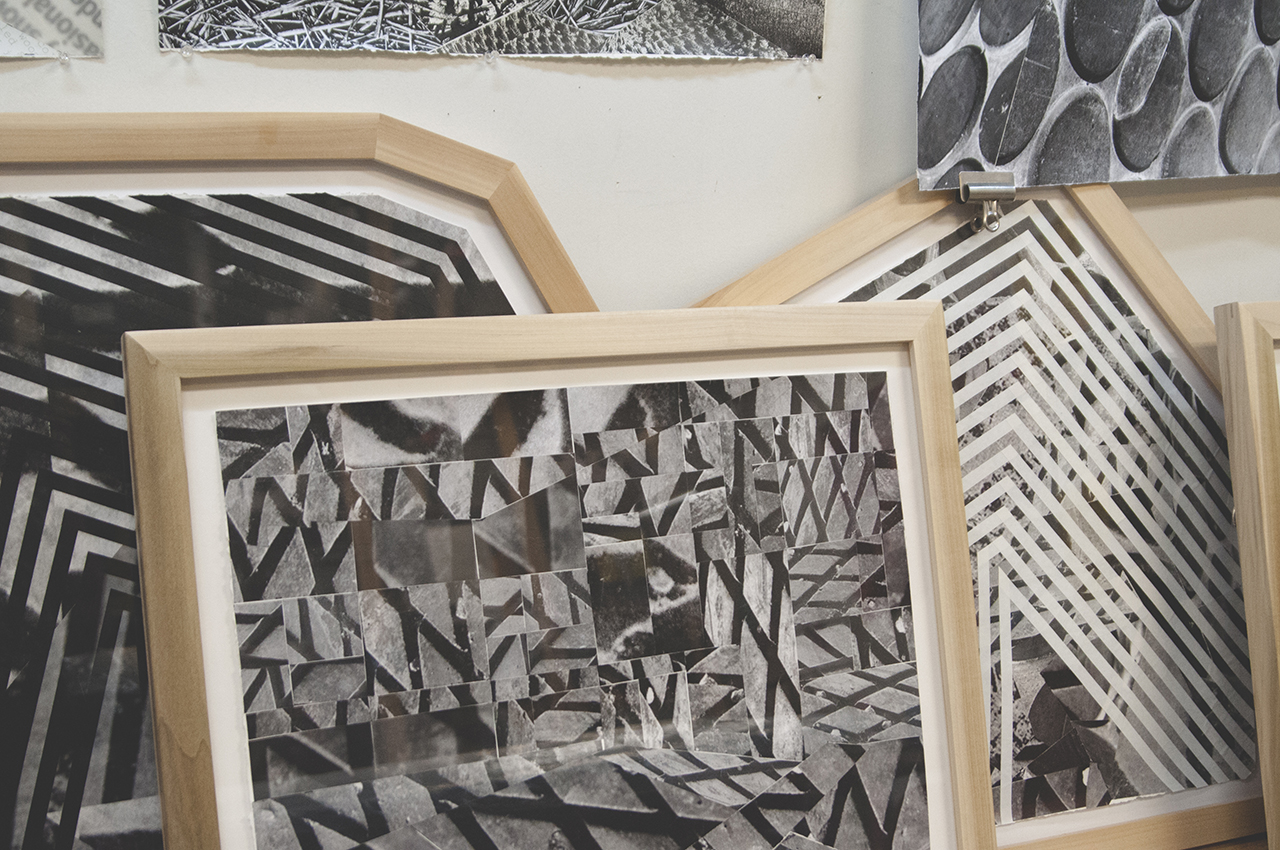 What is the content of the images you use in your black and white collages?
The images are of surface—the surfaces that we all travel. My photographic process tends to be very cerebral. My photographic process influenced my collage process and the collage process then came back and influenced the photography process. I am thinking about this commonality that we share through an experience of moving through the world. I like to think about our influence on the environment around us, and the detritus that we leave behind. I want to capture how we communicate with that. In this way I am photographing people, but doing this through their once presence, what still lingers on the surfaces they once touched.

It’s not about the photograph itself, but it becomes delineated further— a further removal through enlargements of the photograph that I incorporate back into the collages. To me it is extremely important that the elements are removals from the actual photograph so the language can keep moving forward.

Your titles often reference the specific location in which an image was taken. Are you concerned at all with the environment in which you find these surfaces, or just their texture?
I feel like I should say yes and no. The space came through earlier in my photographic space but now I am just referencing that. I am now referencing it a bit removed. When deciding how to form my collages, I usually choose subjects that I have a lot, if not daily, interactions with. We are all creatures of habit, we often traverse the same routes and I am constantly soaking up my surroundings—how they are evolving, breaking down, growing up and engaging with light throughout the course of a day. don’t know if I notice things differently from others,  but there are these times when the entire world looks like the movie TRON, a series of lines based on energy. Everything catches my eye and it can be quite intense and actually annoying sometimes. I love texture, detritus, and patterns. I also have a love affair with lost gloves. There’s a collection of them in the studio.

How has Philadelphia influenced your work in Chicago, I’ve read that you feel as if you are an outsider in both locations.
Philly is a town where religion and identity can seriously dictate how one is received.  One’s religious identity in Philadelphia can almost transcend race…almost.  But it fails in doing so and just furthers the myths of race, gender and patriarchy by adding another layer to the shit cake. On a basic level, Philly made me technical, Chicago made me more conceptual and more concerned with language. Philadelphia and Chicago are really interesting spaces, Chicago being so segregated and a lot of people not recognizing that, even if they were raised here. Since the 13 years I have been in Chicago, Philadelphia has gone through a multitude of changes that I can’t even identify with. Race is a social construct that is not real, but we have made it real because we have made racism real. Race is a segue for racism and they balance each other out. Racism is tangible, so it has made race tangible as well. However, we are all just carbon based energy life forms. When the carbon breaks down it is gone and it is nothing but energy, and energy cannot be destroyed or created, it can just change form. So are you telling me there is white energy and black energy? It’s just energy, that’s it. By recognizing that and making that a part of the practice, I am invoking a language that offers a way of refusal and access. 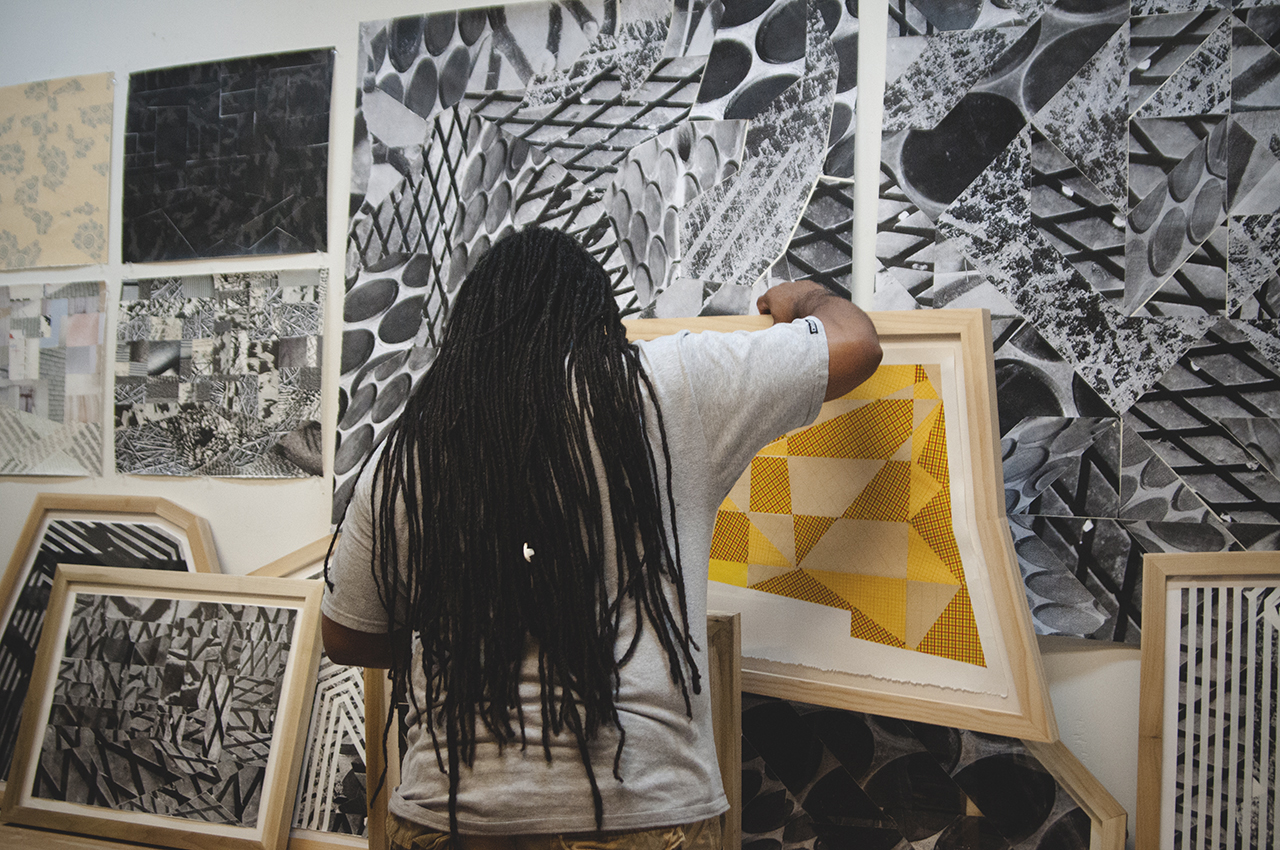 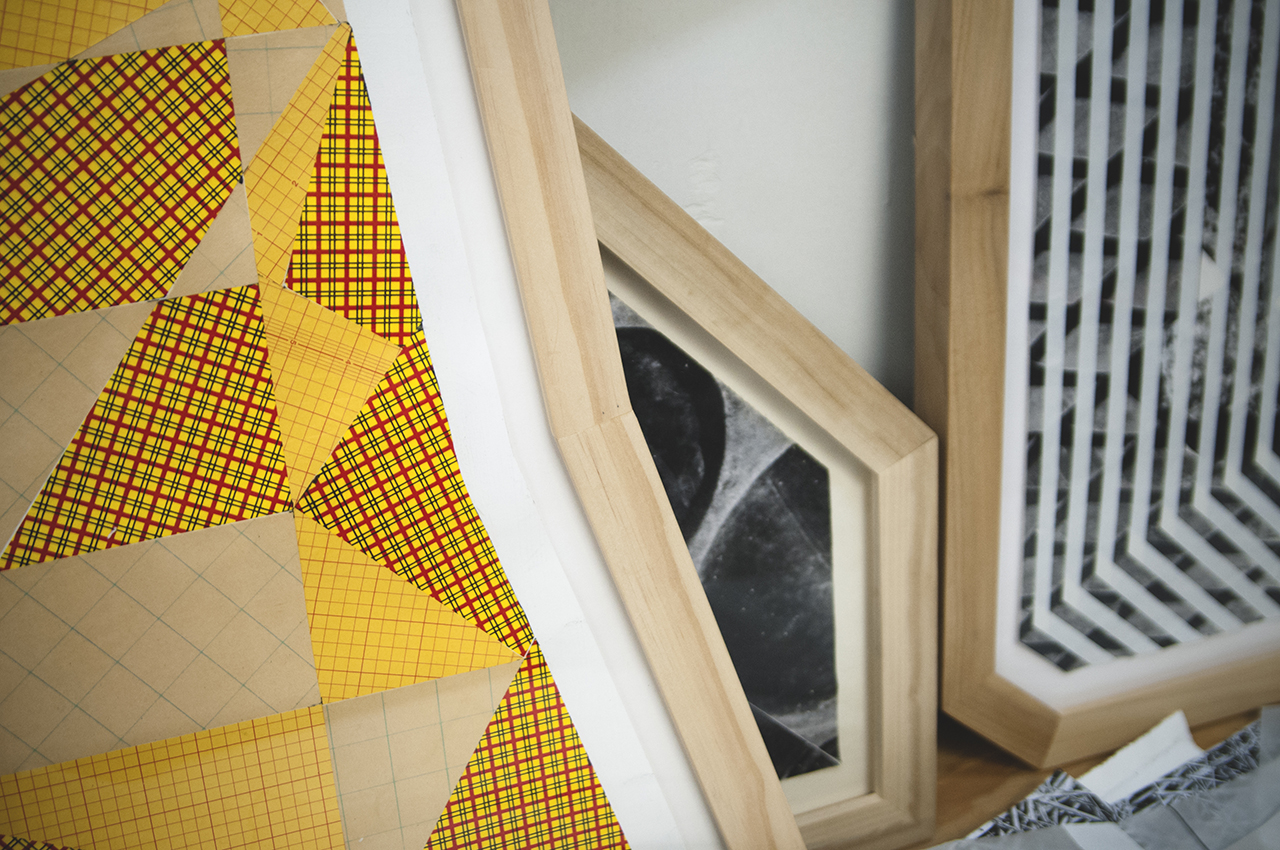 Why did you decide to start making your frames mimic the shape of your collages?
I am really interested in the work becoming a total object itself. I was intrigued by how we as artists have gotten away from making our own frames, and I wanted to control the process from beginning to end. I believe there is this moment of tension or disbelief to the full piece. The awkward framing leads to the pieces almost never being straight in space on a wall. It is always vibrating and moving. There is a speed with that. 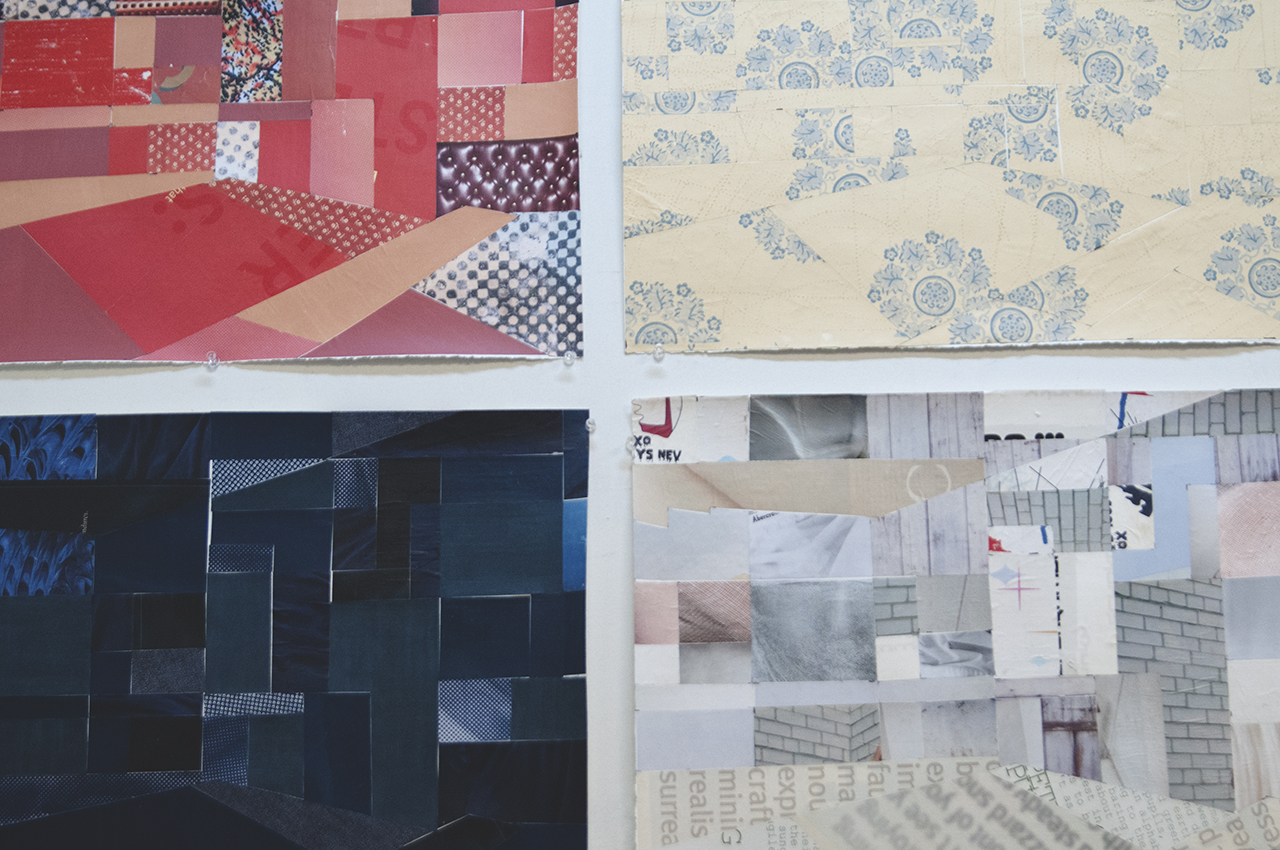 You also have collages that utilize found materials. What is the importance of incorporating these wallpaper samples and magazine clippings?
There’s this idea of insistence. It is like using a word constantly but evoking different thoughts behind it. That is why these things keep evolving, it is this landscape that keeps presenting itself. I have made 15 out of a total of probably 200 in this particular project. They are mainly created from salvaged materials, but I have been also exploring very basic materials like wrapping paper from Target and stuff like that. The ever present use of found and appropriated material is making a claim for a separate idea than my photographic collages. It is not focused on repetition, but insistence as a positive outcome that is discursive. The material itself, whether it be found or appropriated, offers conditions about thinking about ways of access.