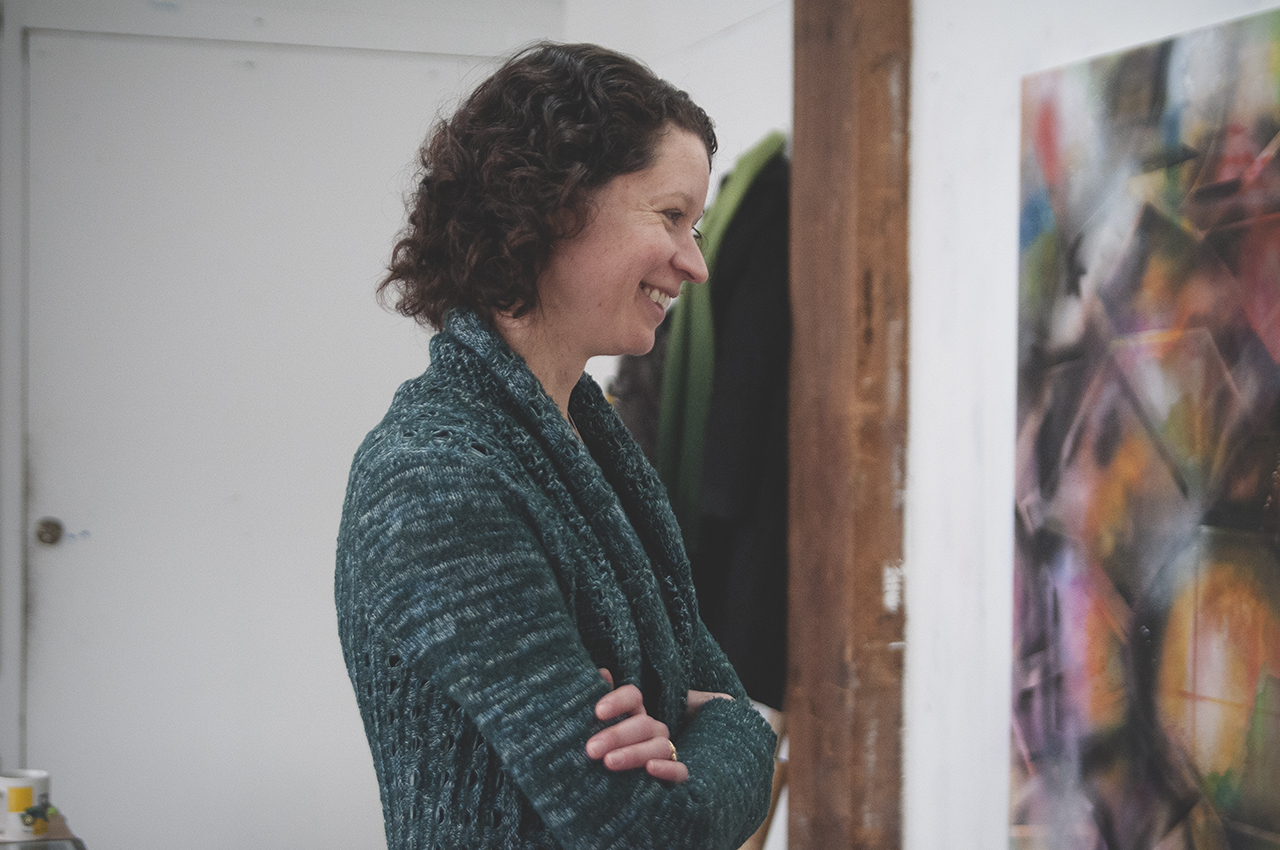 Producing illuminated marks on paper and canvas, Holly switches back and forth between two and three dimensions, craving the variety inherent to her colorful practice. Building up color slowly through spray bottles, she softly layers colors she considers joyous, which turn mysterious once covered with graphite and resist. Inspired by both a science fiction and practical definition of portals, she often encourages her two and three dimensional work to reference that of a fourth dimension.

I\W: Can you explain the relationship between your drawings and sculptural paintings?
HC: The sculptural pieces initially grew out of a painting and drawing practice. When I was in graduate school I was producing really watery imagery, and at some point I was moving the paint around on the canvas in different ways very much like Morris Louis or Helen Frankenthaler. I decided to take the canvas off the frame to think of ways I could manipulate the paint through it. I was trying very hard not to make an image from nature because I wanted the works to behave as if they were formed by their environment. I progressed to sculptural forms, and then went back into doing flat work, and then back again to sculptural work.

Why did you feel this need to move back and forth between the flat and sculptural within your work? Do you still feel this need to work in both dimensions?
Yes. There are so many possibilities in the materials of painting. There is the canvas itself which is not unlike a material used for a garment, and I like that it can take on a bodily mass. It can be hardened, light, inviting, or monstrous. More recently I was working on these illuminated marks, and that process got translated into how I was thinking about cutting fabric and reassembling seams in my soft sculptures. I have a certain obsession with repetition of activity, and a love for movement. I like the ability to move from more illusionistic space to a sculptural form that can engage with you physically and be reconfigured with or by the body, as was the case with a series of works I began in 2014 entitled Propositional Objects for a Future Interior. The sculptures are meant to be manipulated and touched while the drawings are more concerned with landscape and its atmospheric conditions that are prone to change, but there is also an attempt to locate some system of support within it. I think of it kind of like an innie/outie relationship. 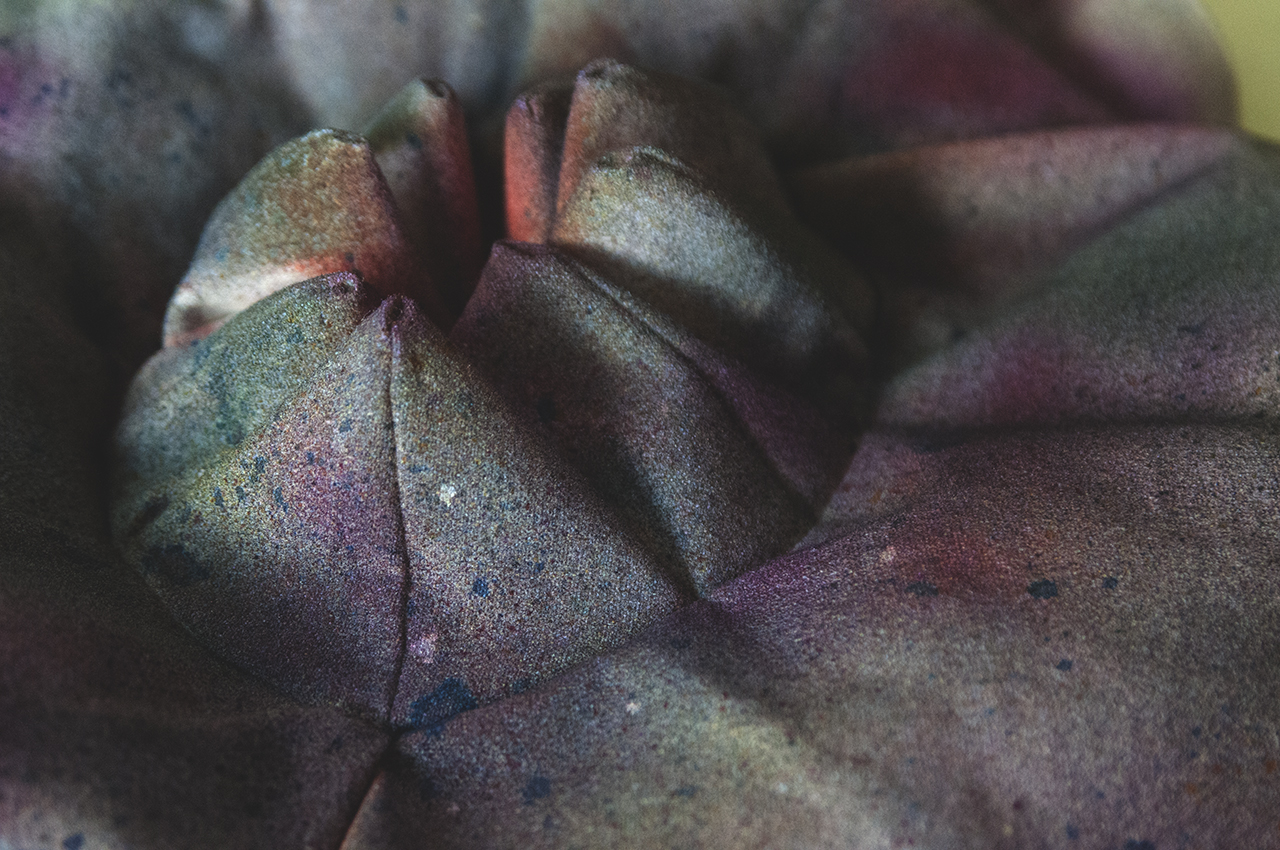 How do you relate your drawings to photography and vice versa?
Despite their material, many of my photographs are drawings, drawings with light. Similarly, I think of many of my drawings as mimicking a photographic process. The underpaintings are masked when graphite is applied, and once removed the illuminated diagram is what you see. This creates a photographic quality to how they look when finished as well as during their creation. Depending on how thick the layer of graphite is, it is almost like a photogram in a way when the tape is removed and the material is brushed back over exposed areas. In a photogram actual objects are put over the paper and then exposed to light. This series of work is putting something over painting and then exposing it to darkness. 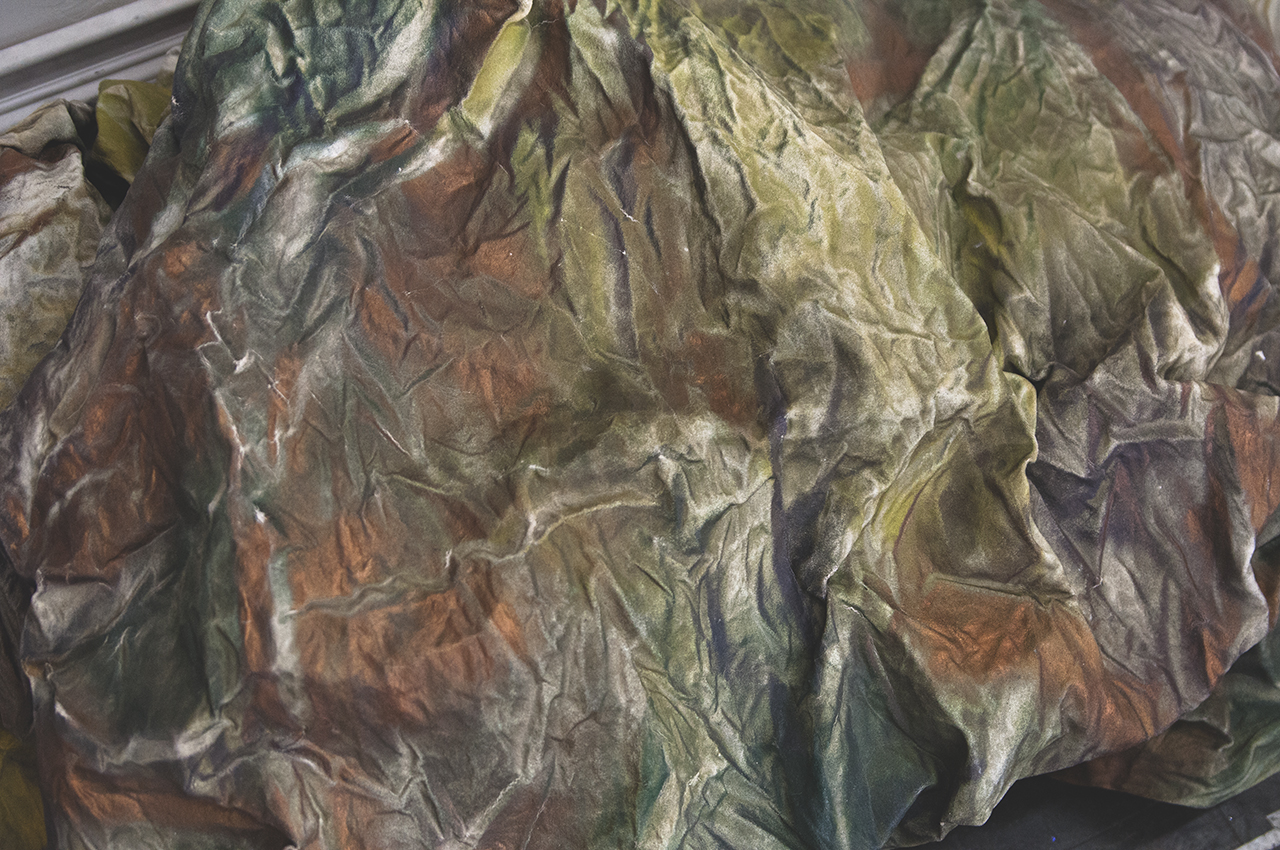 Can you talk about your interest in portals and how they manifest themselves in your work?
Portals have been an inspiration for artists for a long time—this idea of transporting from one place to another. It has also been really prevalent in pop culture and science fiction movies. For most of us, day after day, we are staring at screens, inserting our minds into flat spaces. On the web, everything is labeled as a portal that you need to sign into and provide some kind of security code to access. A portal also refers to the doorway in architecture. I am fascinated by the idea that there could be parallel universes easily accessed through a portal to another dimension.

When I started down this rabbit hole of inquiry by way of our culture’s obsession with the subject, it brought me to look at the Cubist’s and Surrealist’s interest in the fourth dimension, or a space that could be all around you but partially beyond our ability to comprehend it. Their interest was inspired by scientists working with these theoretical ideas. Now, scientists theorize there are a lot more than four dimensions and the idea of accessing this other space is of great interest to me. A portal seems a likely shortcut to getting there. In the illuminated linear forms of my drawings I was thinking a lot about architecture as well as hidden dimensional spaces— the bones of industrial buildings like skyscrapers, for example, but also more intimate support structures in temples and homes. I had an ah-ha moment when I was making a specific work around these ideas at The Banff Centre in Canada and this bulbous shape began to form like a weird sexual encounter somewhere between the monastic and the machinery of life.

One of my guilty pleasures is looking inside buildings and being able to access a private space as an outsider. Perhaps the science fiction versions of portals are not so different than the architectural ones. The hidden dimensions may be just beyond the walls we haven’t gained access to. 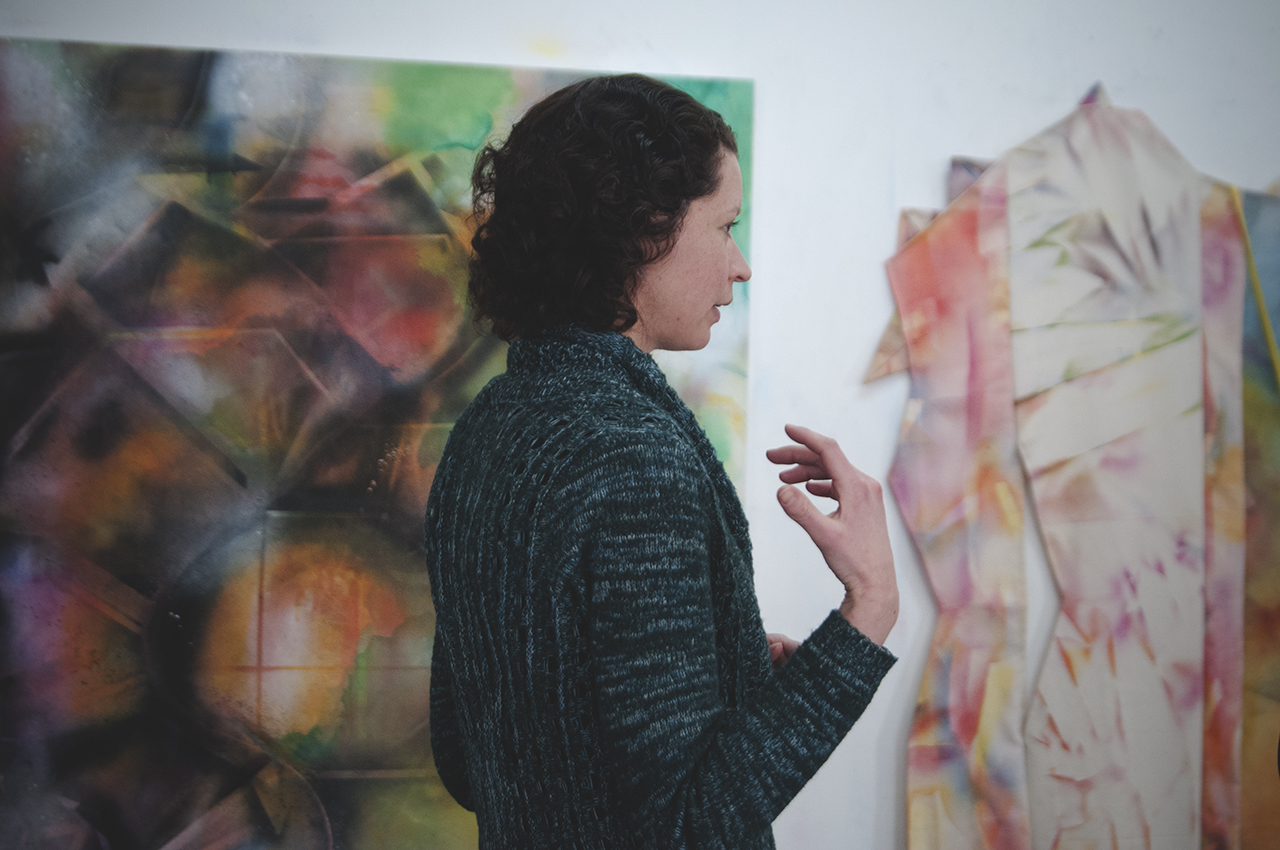 How do portals and architecture relate in your mind? How does your work form each?
Both portals in science fiction and architecture refer to a constructed type of experience. You couldn’t easily access a building without an entrance. Many of the portals you see in movies are modes of transportation designed to provide access to another realm or time. In the movie Stargate they go back to the building of the pyramids and discover that the people were being ruled by aliens from another planet. In Interstellar, the wormhole is the way to manipulate time and space that envelops the main character in a tesseract where he sees from all angles behind the bookcase in his daughter’s bedroom. In Being John Malkovich, opening a door behind a filing cabinet in a middle floor of a building puts you in John Malkovich’s brain! One of my guilty pleasures is looking inside buildings and being able to access a private space as an outsider. Perhaps the science fiction versions of portals are not so different than the architectural ones. The hidden dimensions may be just beyond the walls we haven’t gained access to. 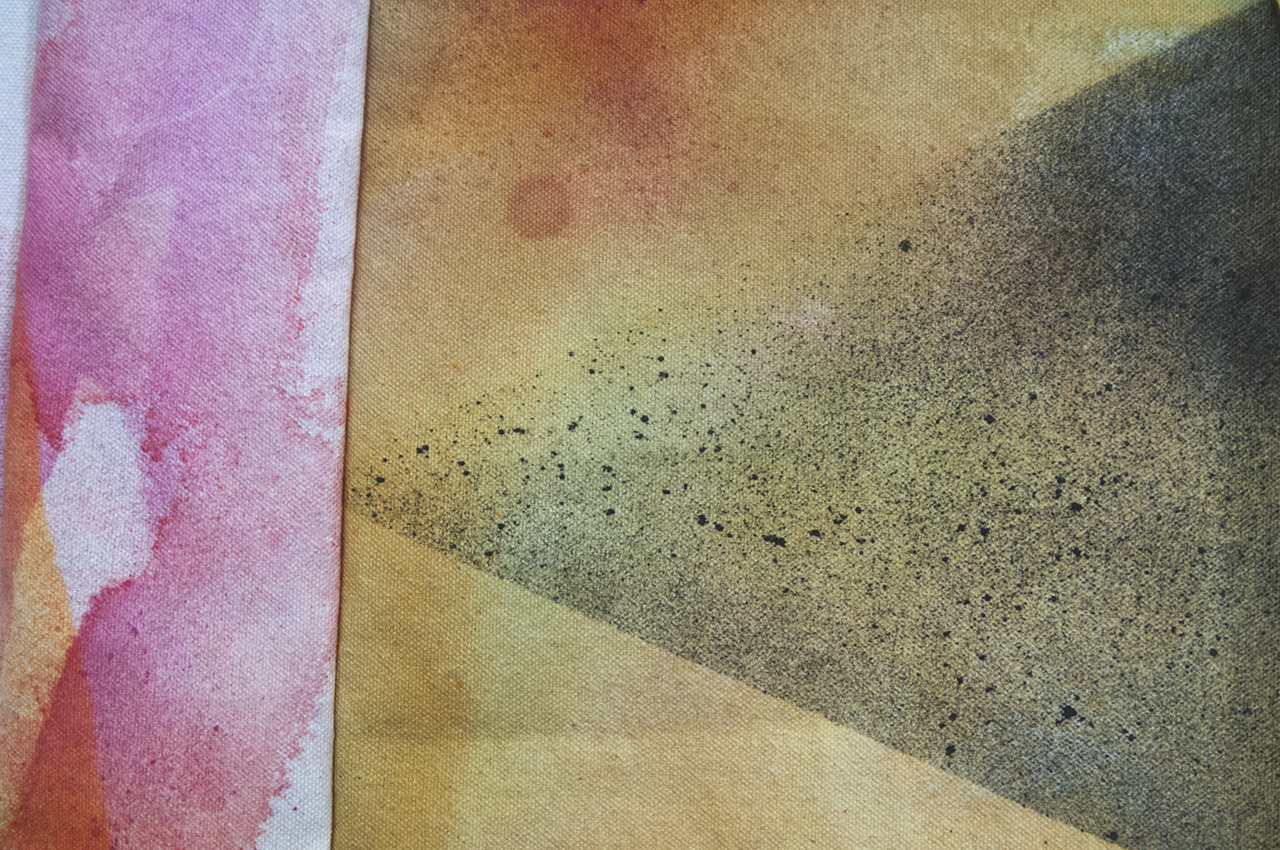 How have you historically built up color in your work?
One thing I have been doing for many years is using spray bottles for color application. I love bright, vivid color, but color that also has a lot of graininess, depth, and luminosity. I feel like when I am spraying, and using water colors, I can very gently layer and disrupt it. When spraying color, I use the primaries to form the secondary and tertiary colors through a misty application. It’s a different way of approaching color, almost like going back to pointilism. I enjoy the pixelation and that as you look closer the detail of the process is very dense but at the same time refers to something larger that opens up the closer you get to it. I am really drawn to color that is joyful or can be made mysterious in contrast to other materials. The color alone would be all light, but in contrast to the graphite, it becomes a script, a maze, an armature. The process of making the illuminated drawings begins with an underpainting, which are my moment to let go of any preconceived notions of what may or may not work with the understanding that what you see is not what you get.

I recently bought a book on the eye and was amazed at this story I read. This painter was in a traffic accident that left him with lesions on either side of his cortex and he was no longer able to see the full spectrum of color. Suddenly his world was in monochrome. He dreamt in monochrome and couldn’t even form the mental image of those colors he was so intimately associated with before the accident, yet there was nothing wrong with his eyes. That part of his brain that could make sense of the data received from his eyes was damaged. The images I can no longer see of the painting are somehow visible beneath the surface in a photograph which is a complete mystery to me except that without the glare back from the materials, you can see clearly through the work like an X-ray. Through the process of making the work, I am also concealing the final outcome of the piece from myself. 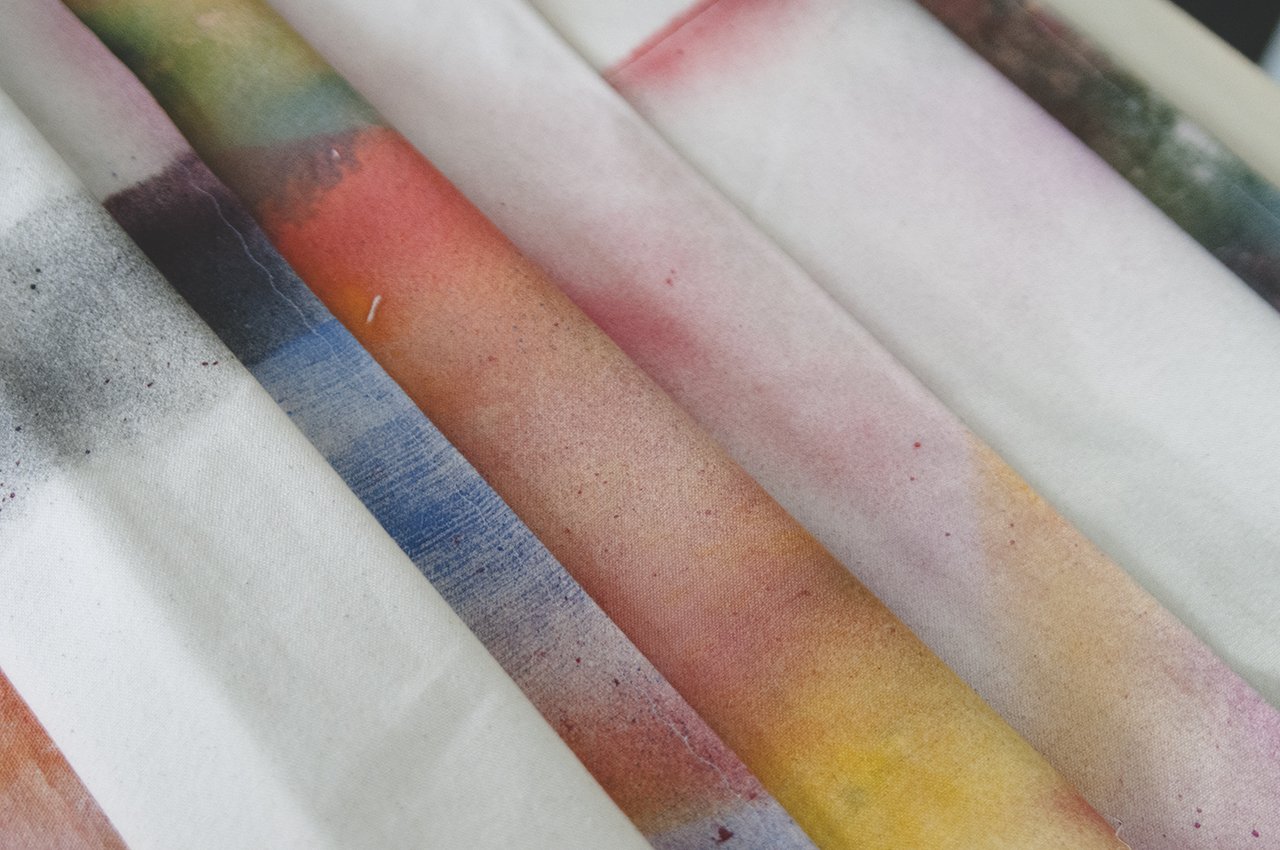 Are the visual seams in some of your sculptures a way to bring the domestic into your work? It almost looks like you are building the structure of a garment rather than a sculptural wall piece.
That’s a good observation. I’ve been working with asymmetrical geometric imagery for several years, while thinking about architecture and, at times, more specifically about the home. When I was a child, our home was on a newer street and I was able to witness the construction of several houses. I loved walking the foundation lines, imagining with my Dad how the rooms would be configured and playing in the dirt. A few years back, my father-in-law gave my partner and I the plans for a family home that he had never built. The plans from that house formed the basis for a project sited in the landscape that I worked on during a residency at 8550 Ohio. The notion of building a home, protected from the elements, carefully placed in its environment and planned with a certain nurturing intention really interests me. I taught myself to sew many years ago and have a fondness for pattern. I came across these elaborate geometric quilts that blew me away. They seemed radical to me as art, but of course, they were perceived as women’s work and I’m sure are still thought of as craft as opposed to art by many. I don’t buy into that distinction. I’m also thinking of these soft painting collages as abstracted movement that can be strung together into a sequence, not unlike choreography or atmospheric channel surfing. 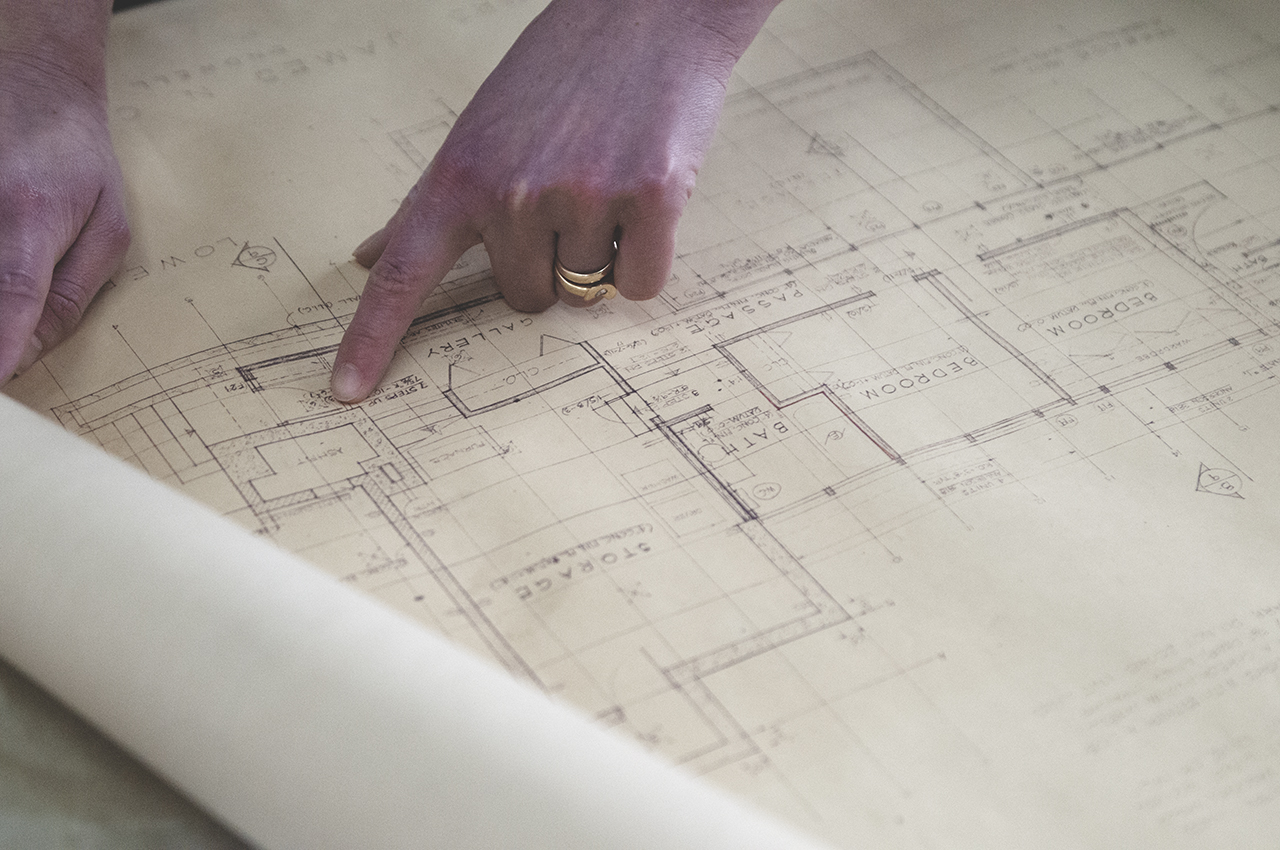