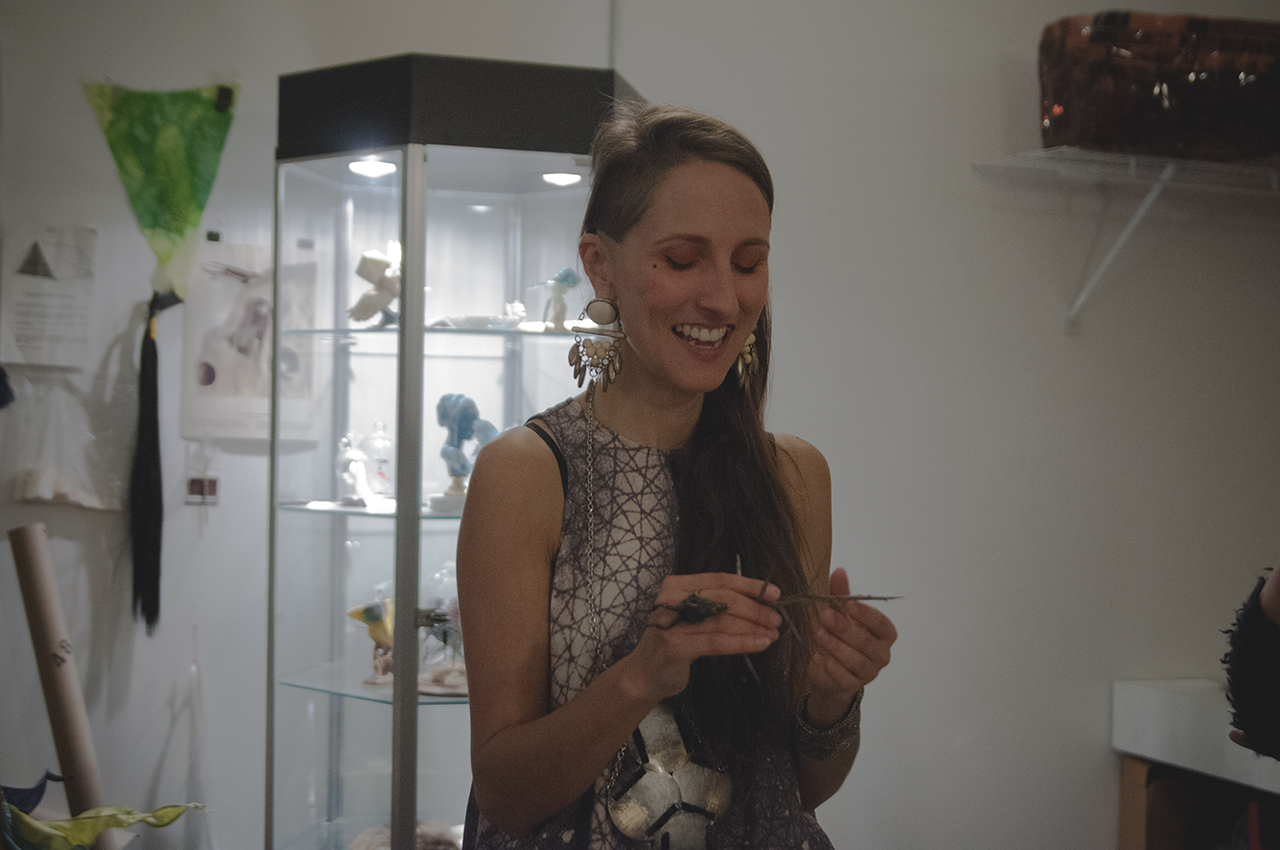 As a naturalist, artist, and activist Jenny is focused on prompting a dialogue that brings attention back to humans’ biological position as animals, helping us to connect more deeply with nature. Jenny organizes large-scale public artworks, balancing this with producing small, delicate sculptures in her studio. In 2014 she began a residency with the National Resources Defense Council, where she has since facilitated several projects that combine art and activism to raise awareness about locally threatened plants and animals.

I\W: How does your practice call attention to society’s tendency to address nature as the “other?”
JK: One of the things I am really interested in within my practice is bringing to life some ideas that I think are simple, true, and obvious facts, but which are completely glossed over and forgotten in modern society. Things as simple as the fact that we all came from nature. It’s just not in the popular dialogue that we ourselves are animals. We inhabit animal bodies. In urban spaces for example, even within the tallest skyscraper, we are still in nature because there are spiders on the panes of glass outside and bacteria on the carpets—and on our eyelashes. You yourself are imbedded inside of this body that is blood and bone and skin and hair. It is an animal body. You are never apart from nature no matter how ingrained in urban life you may be. 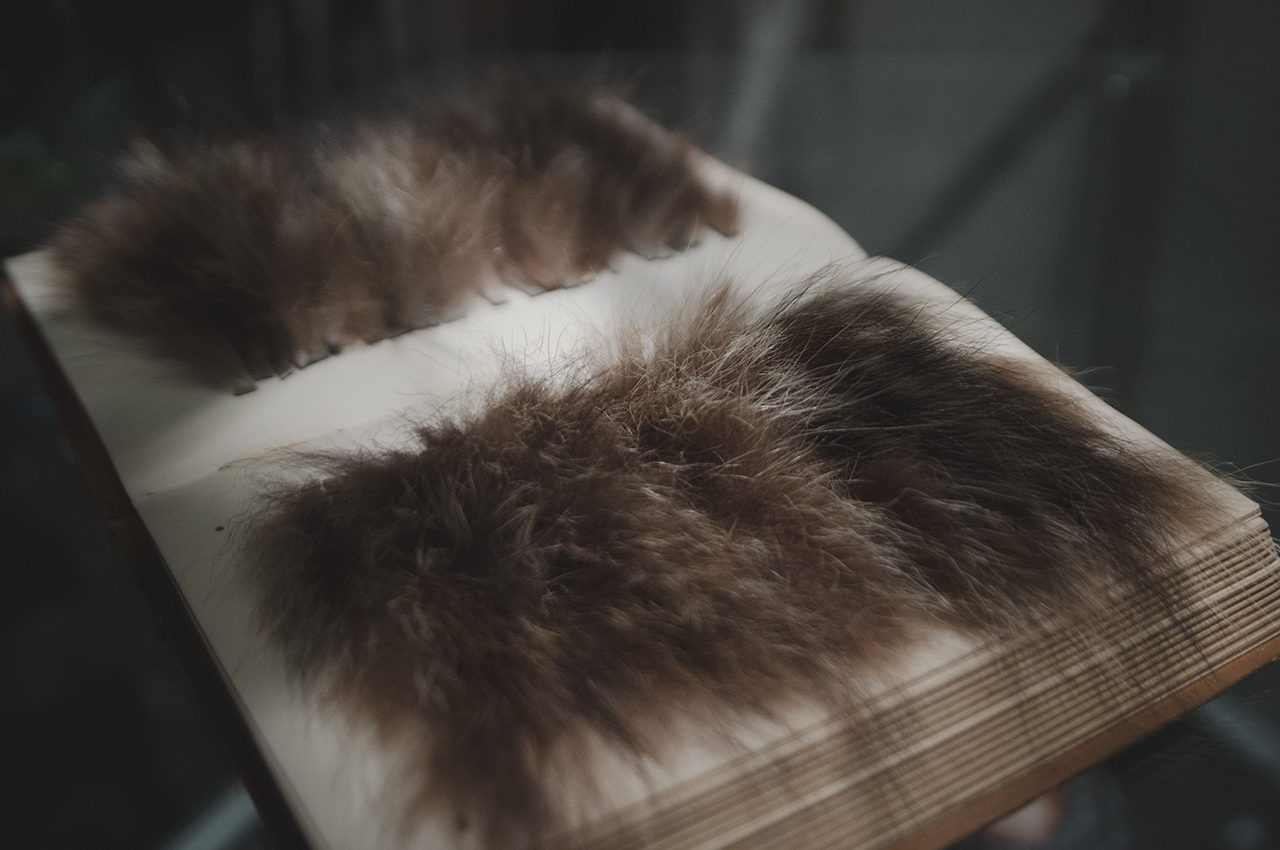 What ways does your work try to express these simple facts about our relationship to nature? Does it intend to bring us closer to our surrounding natural environment or just remind ourselves of our positioning?
I am trying to work against this idea that nature is something outside of ourselves, so I am often using strategies to create or suggest the possibility of a more sensuous, visceral relationship with the natural world. I have been thinking about it lately as this synesthetic experience. In my sculptural work I often use tactile materials like rough freshwater pearls, hair, thorns, fur—objects that can’t help but suggest the sensation of touch when we look at them. I read this philosopher named David Abram a lot; he wrote a transformatively beautiful book called The Spell of the Sensuous which I could not recommend more highly. He talks about re-embedding ourselves in the sensuous world. I think about that as an artist and trying to get people to remember to use their senses, which is a way to root ourselves in these animal bodies we posses, and connect more deeply with nature. For the vast majority of our existence as a species we have lived in the natural world with an innate awareness of the patterns and rhythms of nature. To have that completely excluded from who we are as a species these days is really bizarre and I think probably contributes to many people’s general unhappiness and dissatisfaction. Our world is also not nearly as exciting, challenging, or dangerous as the one we evolved for, so I think many people are suffering from a form of ecological boredom—and that a deeper re-connection with the natural world would benefit almost all of us tremendously. I don’t think nature is a completely benign, loving force, but you can see that there is at the very least some fundamental practicality to working with biological systems. What I am interested in as an artist is thinking about the psychological consequences to all of us as individuals—how it impoverishes our lives and our experience of what it is to be human when we forget about or deny this huge part of who we are as a species. 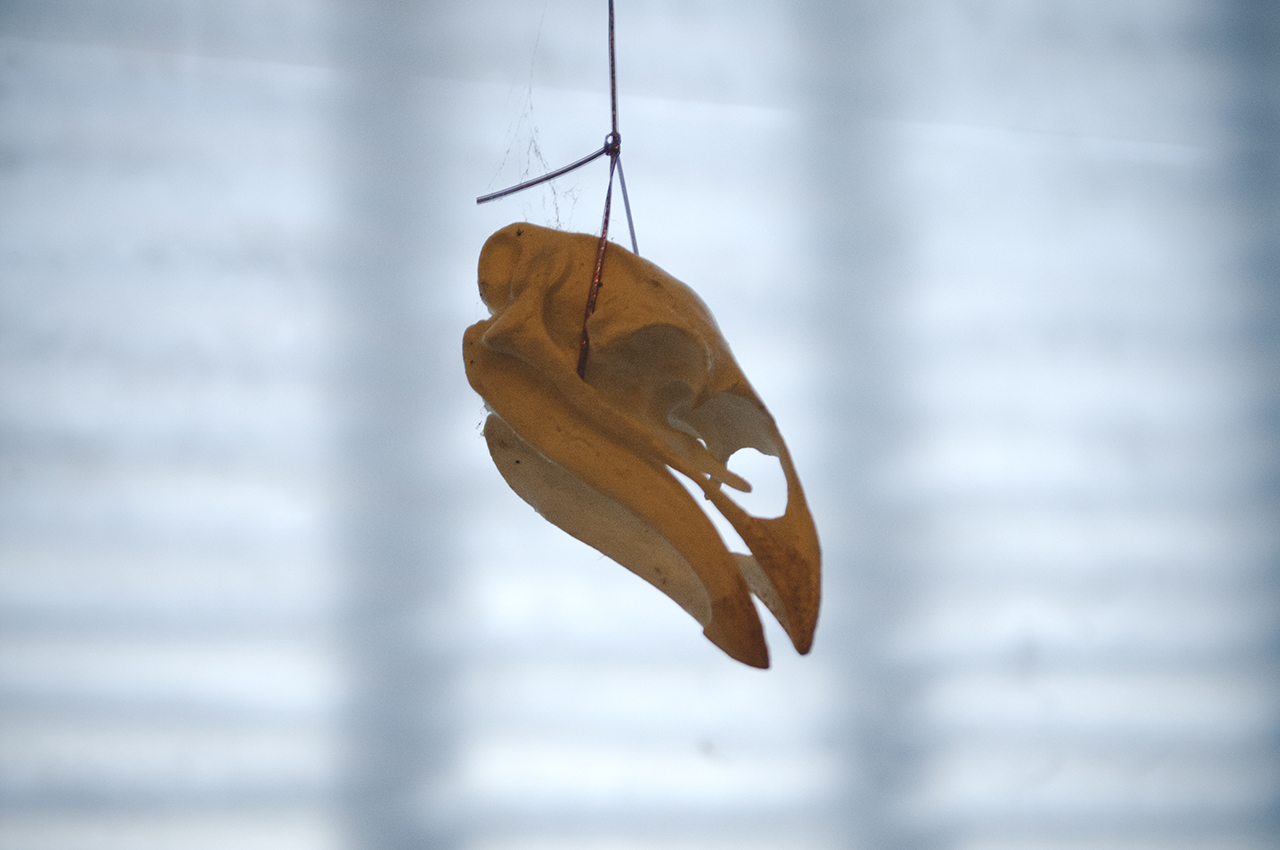 How do the large-scale public aspects of your work balance your more intimate sculptures?
The last few years I have been working on these large-scale public projects that are interactive and generally in public venues. I have been commissioned by museums or municipalities to make projects for a public space. During this same time I have also been crafting small intimate objects in my studio practice. I am interested in how these smaller works relate to the human body, works that are meant to be encountered by one person at a time, so the relationship to the body is very important. The public work tends to be quite the opposite. It’s been a satisfying balance to my practice because I can work in an intuitive and tactile way in the studio, and then the public projects tend to be quite large and complicated and require a lot of planning to create. They are a nice compliment to each other in being able to use a really research-based process that is maybe more conceptually dense, and then also having these kind of aesthetically-driven projects that I feel are all coming from the same place. 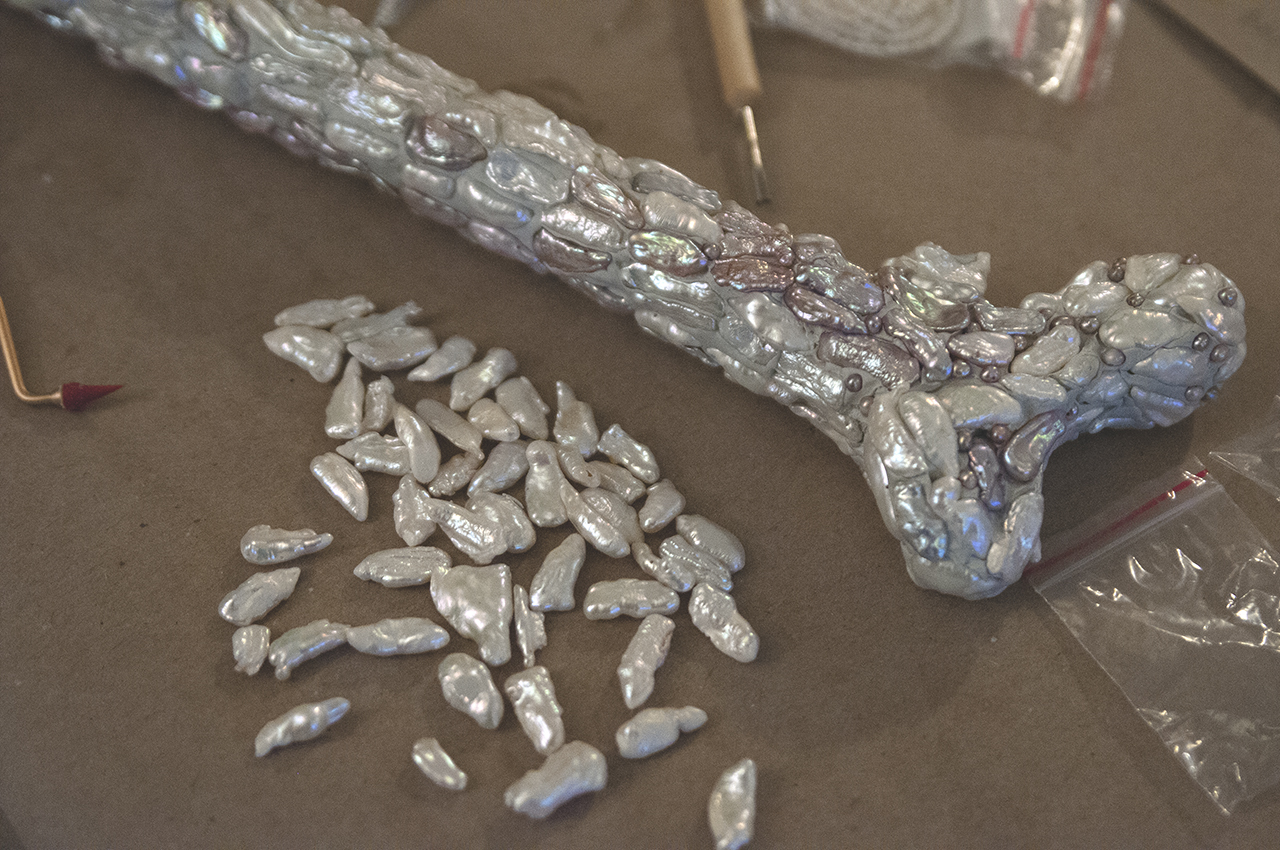 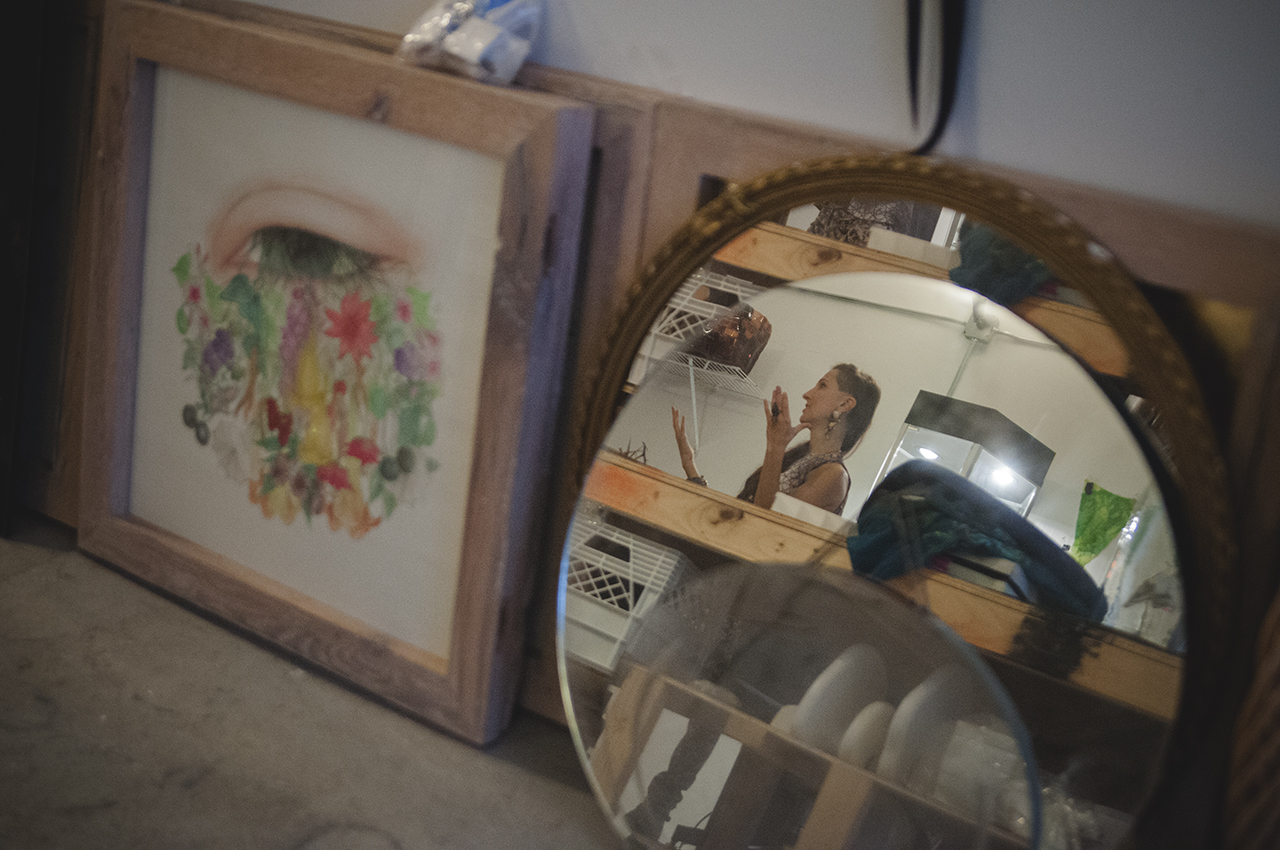 What type of work have you created during your residency with the Natural Resources Defense Council (NRDC)?
The initial plan with them was to have a year-long residency which started in April of 2014. I was embedded within their fantastic Land and Wildlife program, but it was such a fruitful, generative partnership that I am continuing on as a resident for a second year. This time I will be working with the Water program which is also headed out of the Chicago office. Working with them has allowed me to go back into my bag of tricks, my sketchbooks, and realize projects I have been wanting to work on for a long time. The projects I created during the first year were the Milkweed Dispersal Balloons project, Tell it to the Birds, and A Place of Light and Wind (for Lost Prairies).

MDB was commissioned by the Rauschenberg Foundation and debuted at the Pulitzer Arts Foundation in St. Louis, but has since traveled all over the monarch’s migration path. It is a essentially a food cart for monarch butterflies, whose populations have been reduced by 90% in recent years, largely due to Monsanto’s herbicide RoundUp, which has killed off milkweeds, the only plants upon which monarch caterpillars can feed. From the cart, we give out clear, biodegradable balloons filled with fluffy milkweed seeds, which participants are asked to take home to their yards or neighborhoods and pop, releasing the floating seeds to plant themselves. I choose a very tenacious species, Asclepias syriaca, which will grow well in urban environments, and provide a real, viable food source for migrating monarchs.

Tell it to the Birds is an immersive project created initially for NRDC’s booth at EXPO, though it has since also been shown in Millennium Park at the invitation of the Art Institute of Chicago. It’s a complicated project to try to explain briefly, but basically invites people to privately make a confession to the natural world, which is then translated into the song of an endangered bird chosen by the participant.

A Place of Light and Wind was a 38-foot photo mural on the front of the Violet Hour of intensely colorful, almost psychedelic prairie wildflowers, which aimed to raise awareness about Illinois’ threatened prairies. Though we’re called “The Prairie State,” less than 1% of our prairies remain, and most Illinois residents have never seen one. I wanted to give a sense of the beauty of the prairie, while also realizing the vision of the mural in backyards all over the city—so QR codes on the backs of every pollinator on the mural allowed passers-by to get free prairie flower seeds in the mail. 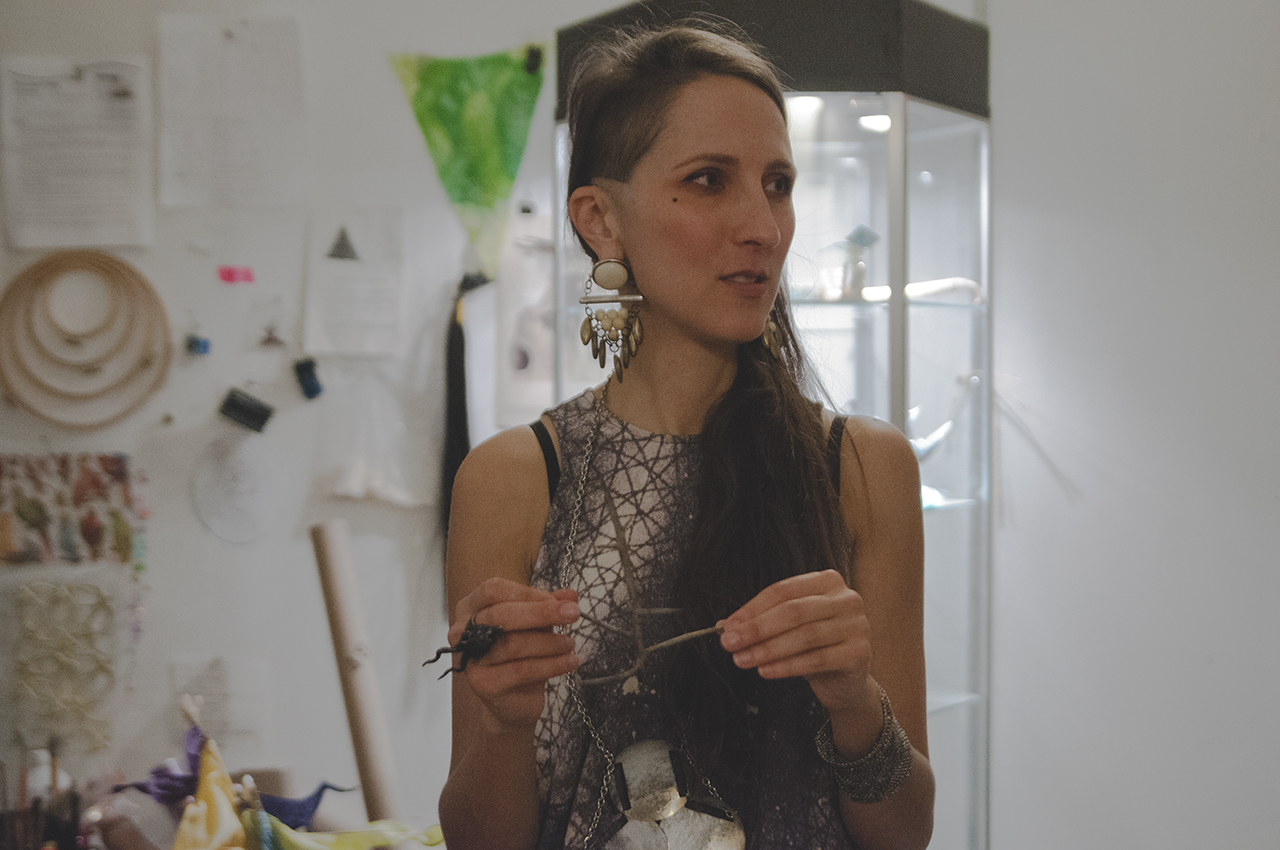 How did the idea your Endangered Species Print Project come to be?
I’m still working on it, but more of the day-to-day work has been taken over by my collaborator Molly Schafer who is in Chicago as well. We started ESPP in 2009. We were sitting around Molly’s kitchen table drawing banners for different factions of an endangered species army that was going to rise up and overthrow humanity—and we started to think about how we could use our animal geekery, drawing skills, and love of nature to do something that was actually going to create an impact outside of the traditional gallery system. So ESPP creates prints where the edition number is linked to the number of animals or plants which remain—so we are linking the rarity of the species to the artwork itself. We focus on critically endangered species, and also neglected or “underloved” species that don’t have a big organization working with them. We are often sending checks, for example, to the one guy in Hungary that is working with the Moldavian meadow viper. That’s the kind of story that we are interested in, and so when we give a $700 check to the small team that works on Panamanian golden frog conservation, it is actually a big deal and really matters. Conservation absolutely matters. It is not just sad stories. The biodiversity of our planet is our most precious resource and gift. 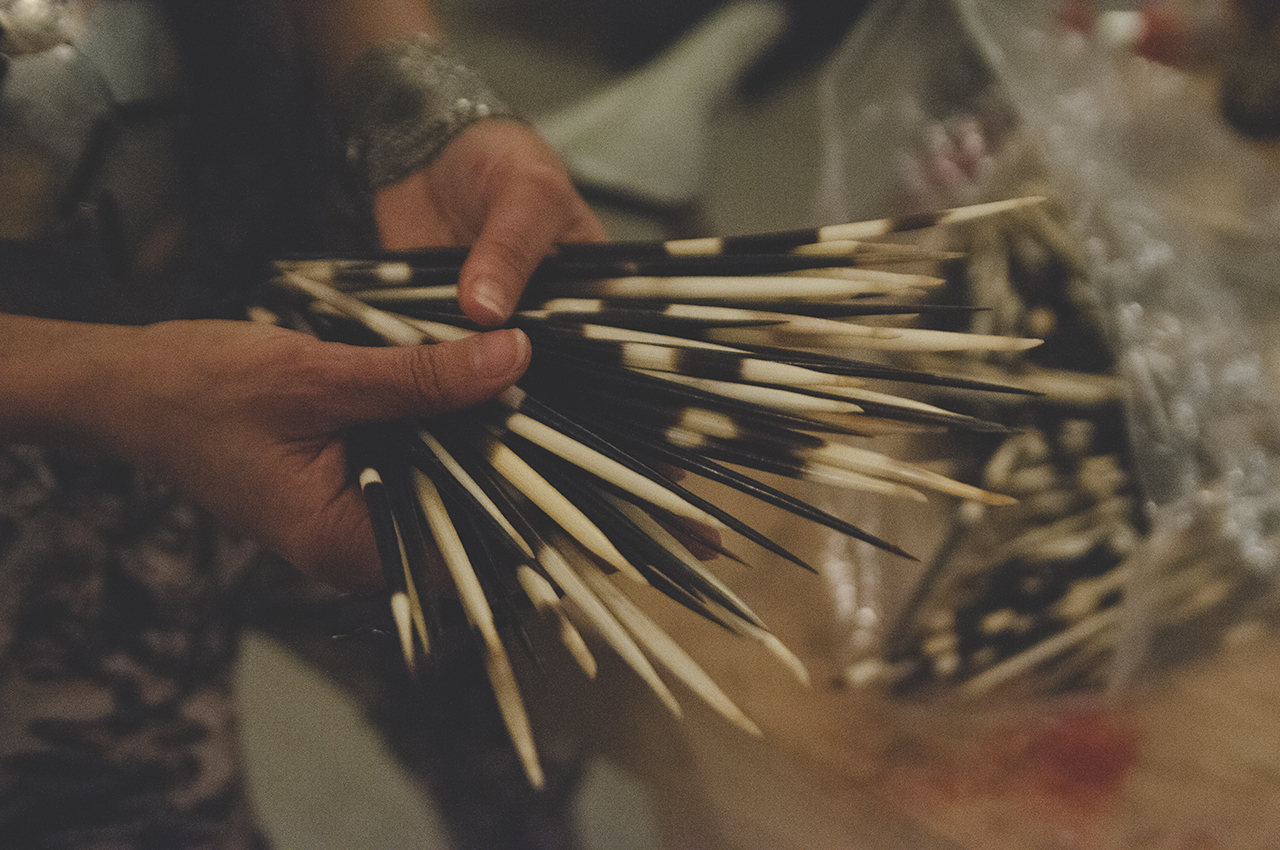 Can you explain where the inspiration for some of your smaller sculptural objects come from?
With a lot of them I am interested in looking at domestic objects and seeing how they become surrogates for a connection with the natural world. You get people decorating their houses with animals which I am not saying there is problem with, but there is a problem when the relationship ends there. There is a problem when you are only having a relationship with a cliched version of a creature and not with the reality. I am really interested in birds, butterflies, and flowers partly because these creatures are so strange and wild when you actually confront their existence, but people so seldomly do that. They have this Hallmark card idea of what a butterfly is and it just stops there. I am really interested in getting people to deconstruct this cliched relationship and re-encounter the bizarre. Some of my sculptures are covered in lichen which I like to think is re-wilding them or bringing them back into the natural world. With some of them I am thinking about them becoming surrogates for endangered species— they are fragile, delicate, porcelain creatures. These vintage porcelain objects are the things that people have nurtured and cared for, and were the ones that made it through all these years. It becomes an analogy for how we could choose to care for real birds.

I’ll be showing some of my porcelain bird pieces in an upcoming solo exhibition for a small museum in California, in San Luis Obispo alongside a new project which is also thinking about camouflage as a metaphor for embedding ourselves more deeply in nature. I’m creating a wallpaper from the deceiving eye-spots of butterflies and moths—and I’m also making temporary eye-spot tattoos, which I’ll be applying to people’s faces throughout the exhibition. Excitingly, these eye-spots, which serve to protect butterflies and moths from predation in the wild, disable facial recognition software when placed on human faces. So, just like the deconstruction of cliches about non-human animals, it’s making us bizarre again. The project suggests we could decide to re-wild ourselves as a species, embracing once again the beautiful, strange animals inside. 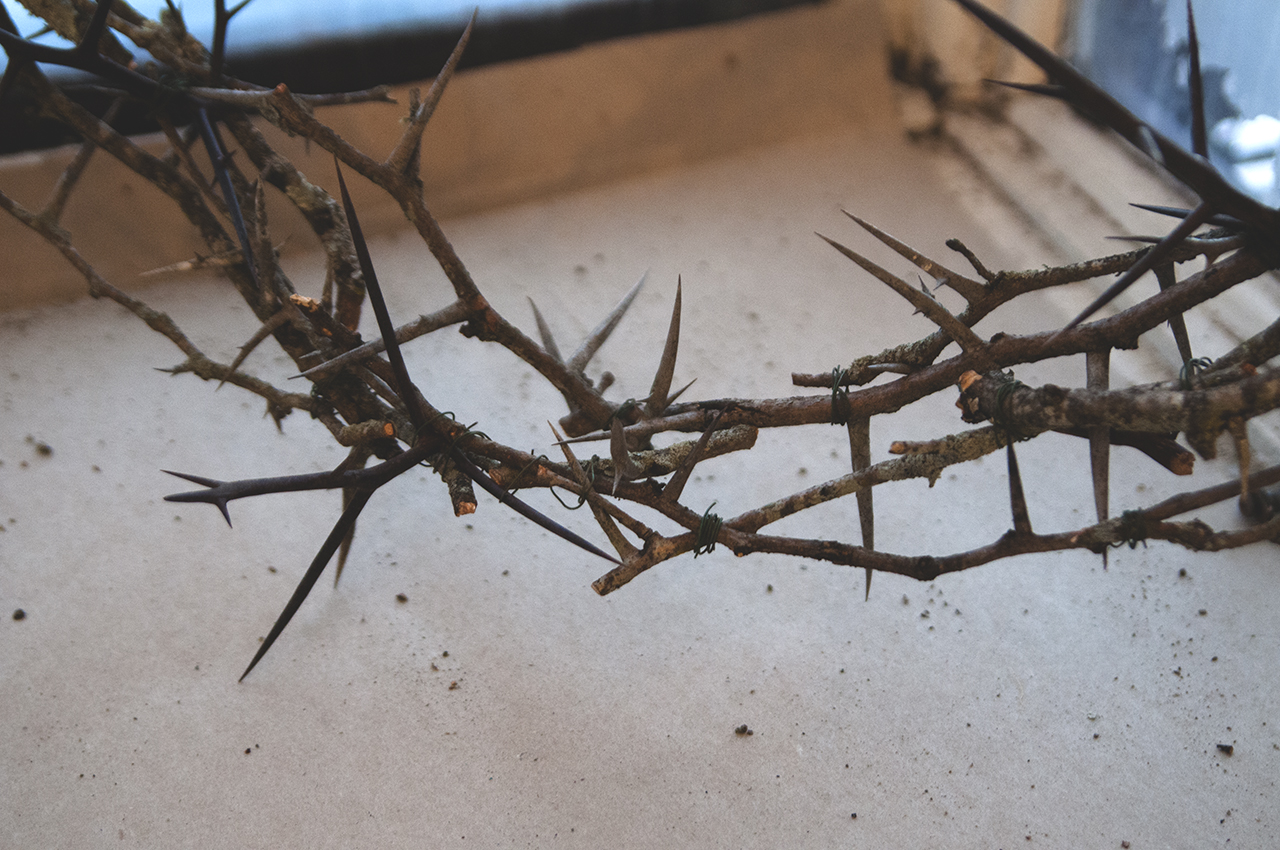