Jeroen Nelemans: Deconstructing the Life Form of the Digital Image 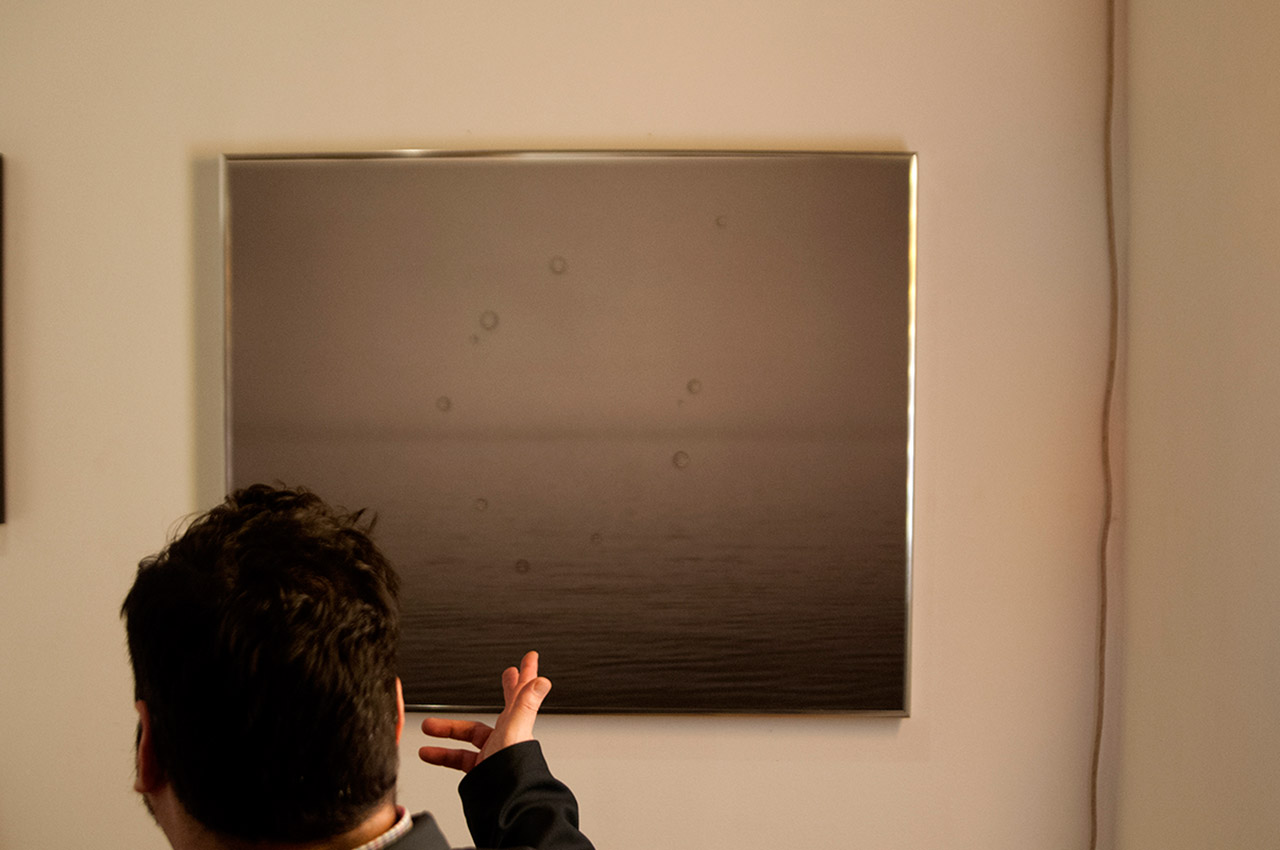 Jeroen’s studio in the West Loop is tucked in the same space as ASPECT/RATIO, his husband’s video art gallery. As a Dutch artist Jeroen is obsessed with light, using his work to pick apart its use in lasers, classic paintings, and the digital image.

I\W: What is your fascination with cycles?
JN: My previous work had everything to do with cycles. I was working with these large-scale installation pieces that involved the sun and water. They were very natural cycles. I would grow grass inside of AstroTurf. I would suspend the grass and AstroTurf six feet above the ground and the viewer would be introduced by the root system first, and then they could perch on this wooden pedestal and become a part of the landscape. I started working with nature partly because I didn’t like the sculpture department in my undergrad—it didn’t fit with me. I’ve always had an obsessive behavior with things. I like repetition, so maybe that is where cycles come in. In my earlier BFA work I would collect empty snail shells. I would go to parking lots or nature preserves in Miami and I would obsessively collect these shells. The obsessiveness is still seen in my work, but now it is clicking on the computer.

Has your obsession moved from more natural cycles to technological ones?
Absolutely. I think the cycles are a little less obvious nowadays, but I still have a rhythm in my work where I tend to work in series—which is kind of a cycle in itself. I like to put boundaries to my work or otherwise it continues growing and growing. Every time I am thinking of new work I always tend to go to reading again. From there and the previous work, it directs me in my new work. That has been a cycle for me since I graduated from school. 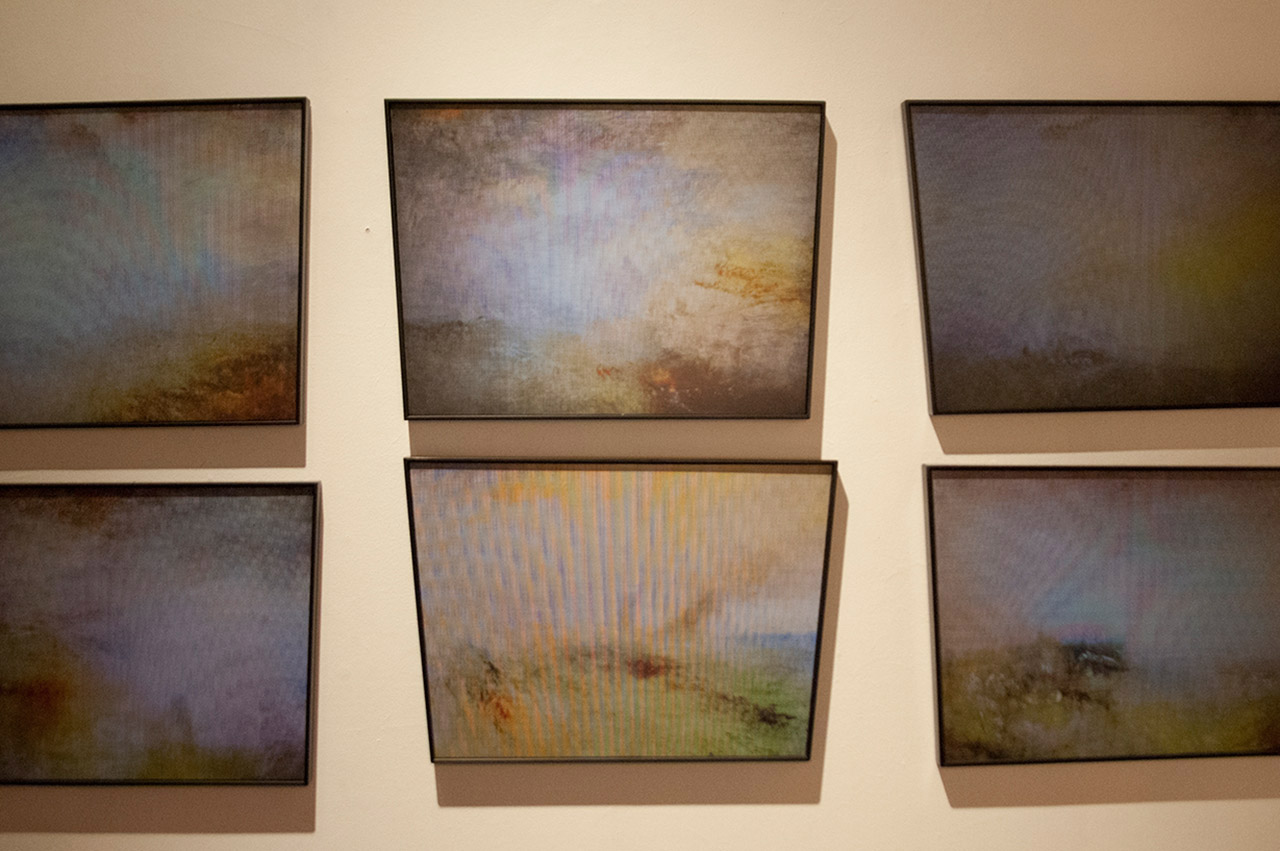 How did your large-scale installation work transition into your newer light-based work?
All of a sudden the safe haven of the Art Institute academic atmosphere was gone, and I had to reinvent myself. With my partner, who was heavily in the world of the video, I got exposed to a lot of video work. There was a crucial work with a goldfish called “Live Feeding.” That was a crucial part of my work because I was still using a natural element, but now I was imposing a video element. I used video to introduce that time element that my installations had. I was doing frame by frame work, very tedious. It took forever just to do ten seconds. I really enjoyed it because it was new to me. I had to learn Final Cut Pro, I had to learn video, I had to make mistakes. From there on, light boxes came. I wanted to go back to the object again. I gained a studio and all of a sudden I allowed myself to think three-dimensionally again. 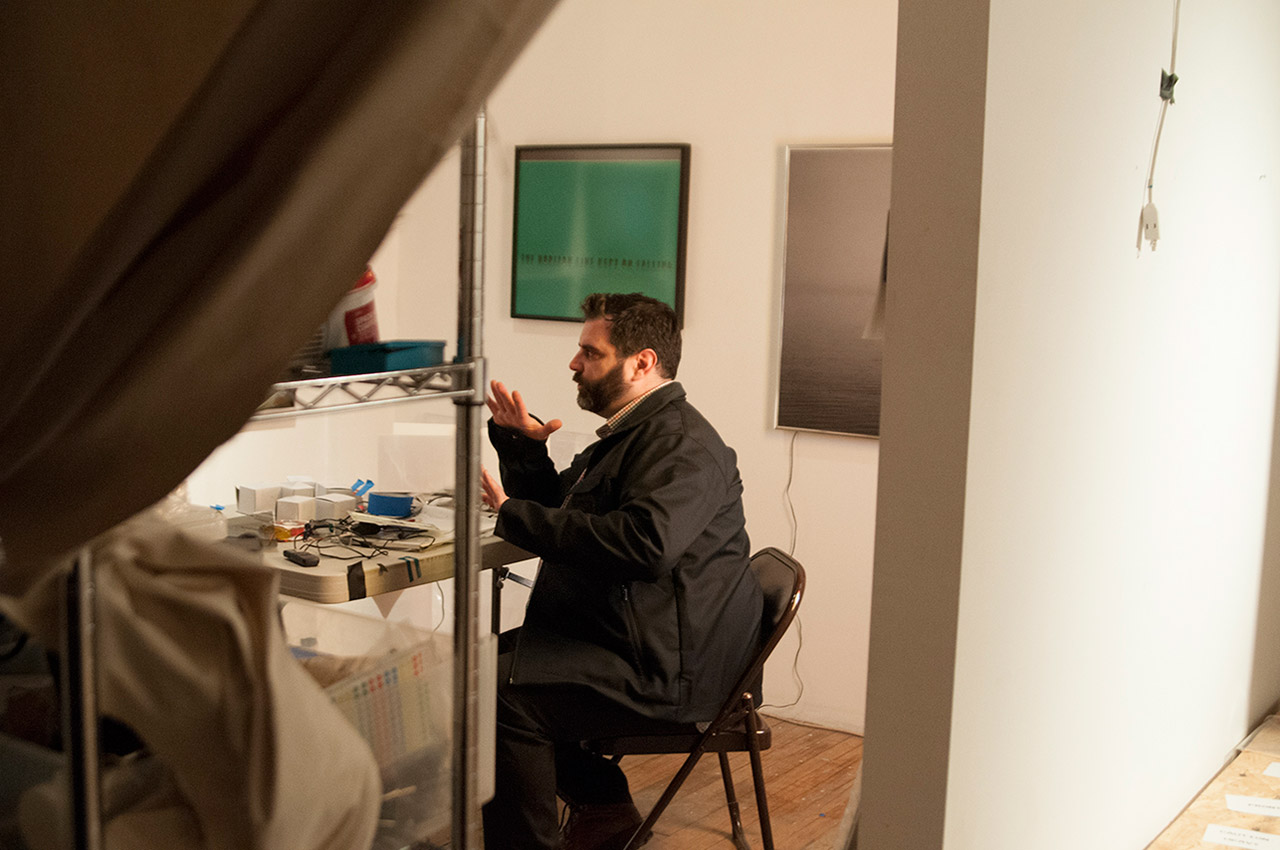 Will you explain the process behind your series, The more I see the less I grasp?
I acquired light boxes from Borders. I thought the boxes were beautiful, and the stores were closing. I got obsessed after getting one and wanted more. As mean as I was, I called Borders in different locations and asked ‘When are you shutting down?’ I was lucky enough to acquire eight of them, and as soon as I got them, I took them apart. This is something that I am doing right now with images, I am seeing the digital image itself as a physical entity, and dissecting them and seeing what I can do with them. With the light box, the first thing that was great was that the inside of them was reflective. I started working with self-portraits and that didn’t work out and then I realized that I needed to do something with the image and light. I shot it through a green screen. The other thing that happened is that they became unique pieces because the manufacturer’s number and all the other stickers that were inside became a part of the actual image itself. Even though the series was called The more I see the less I grasp, each individual piece was titled by its manufacturer’s number. What’s really important for me is this idyllic nature scene where the sun rays suggestively light up the lightbulbs that light up the image in the first place. That relationship is really interesting for me. 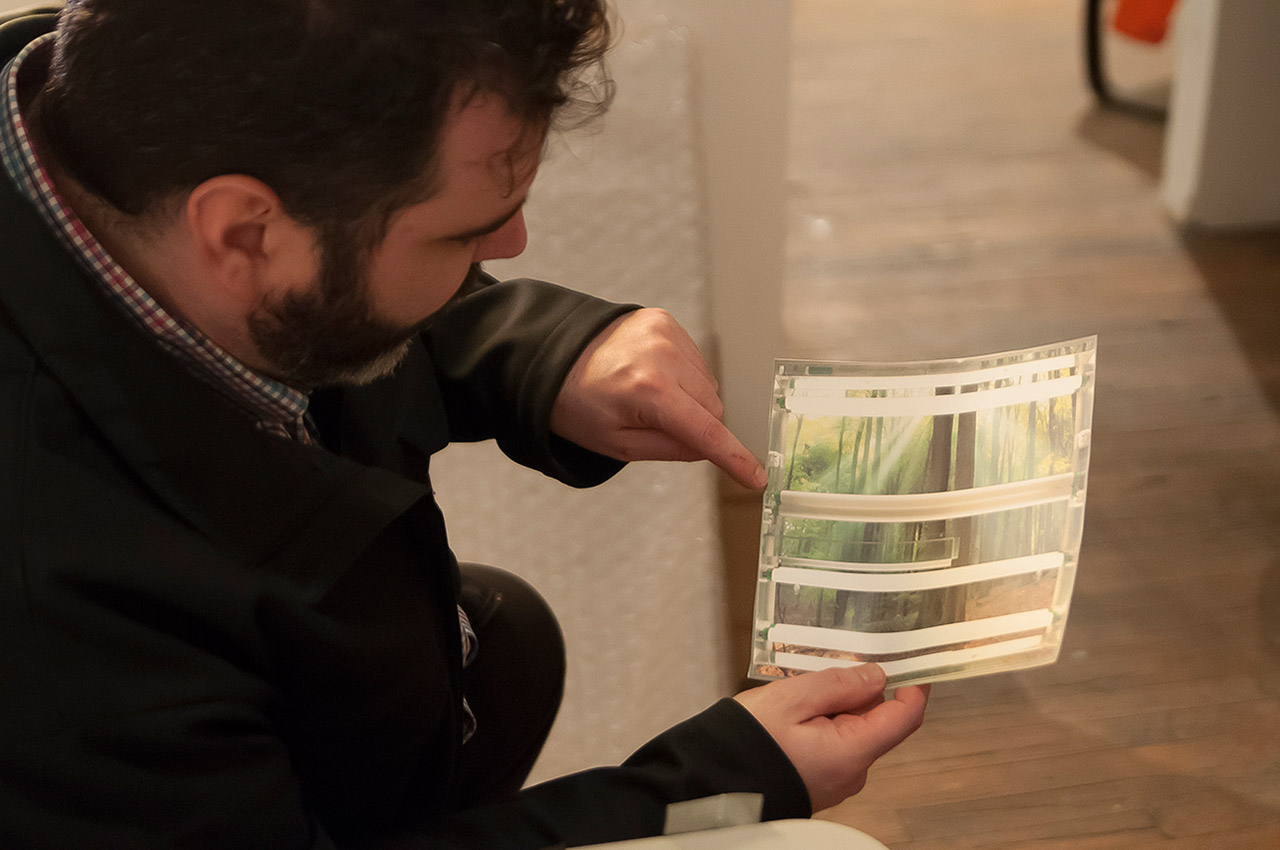 Do you believe that there can ever really be a purely natural image?
Do you mean an image of a natural scene? Nature itself or ‘natural,’ if you look at the dictionary, it means untouched by man. If you go by that logic, then nothing is natural anymore because we really fucked up the ozone layer and that fucks up every little square inch of the earth. Nothing is natural anymore. A lot of my earlier work is really residing in the Dutch history and Dutch culture and Dutch landscape where every square meter in Holland is designed. Even rural scenery that you really think is natural is completely designed by humans. So where my early work was really going between this ambiguity between natural and official, now I feel that there is no such thing anymore. We have to maybe redefine language on what’s natural and artificial. 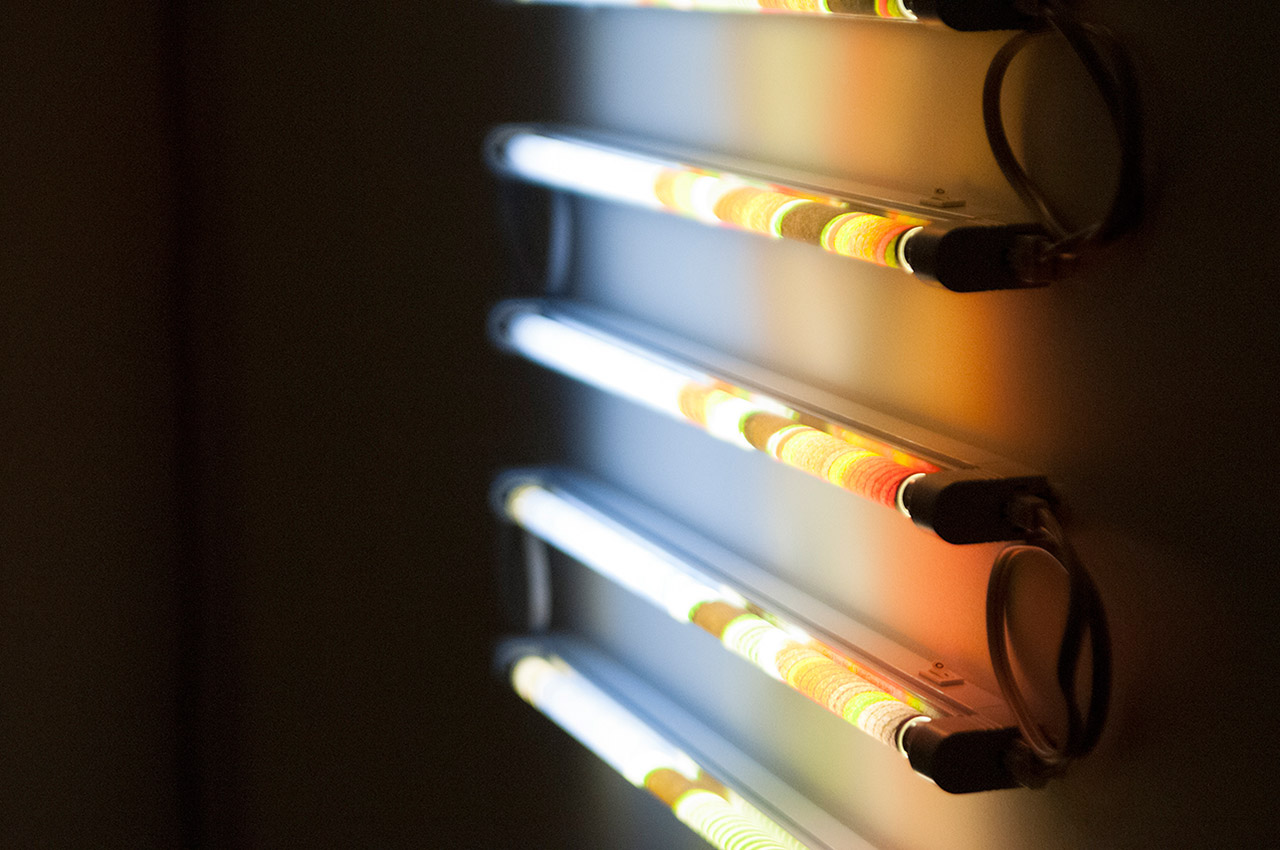 A lot of your work deals with artificial light. How do you think the progression of light through technology affects and influences our cycles?
It is not a matter of a cycle, it is a matter of accessibility. We have access to this world that is in front of us. We can go anywhere or be anybody on the internet. The fact that computers and cell phones are backlit has more to do with technology than anything else, but it is something that I should start thinking about a little bit more. For me, the fascination of being a Dutch artist, we have always been fascinated with light. 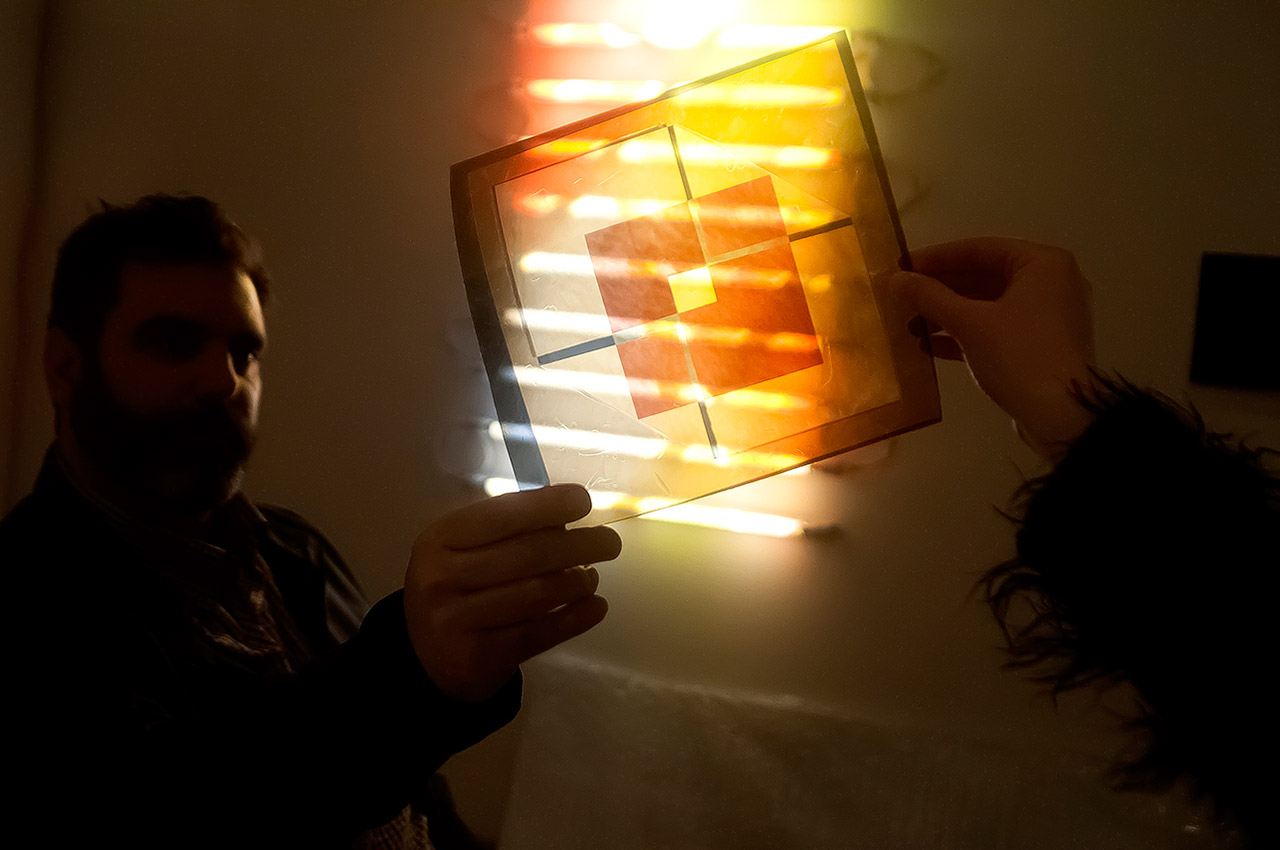 How has the internet changed the lifespan of an image?
I think it expanded it—I think it opened doors. Laws are catching up. A lot of different subcultures are catching up with what the internet can and cannot do. I think that is something that is intriguing. In my series Scapes in RGB I used a series of five light boxes with Hiroshi Sugimoto’s photographs. Sugimoto is a very famous black and white photographer who I admire greatly. What I did was I took a screen shot of the images and displayed them on my iPad and put physical droplets on top. These droplets started to function as a wide-angle lens, and actually showed the RGB that is inside of the iPad. Sugimoto talks about water and air as lifeforms. I am really highlighting the life form of the digital image.