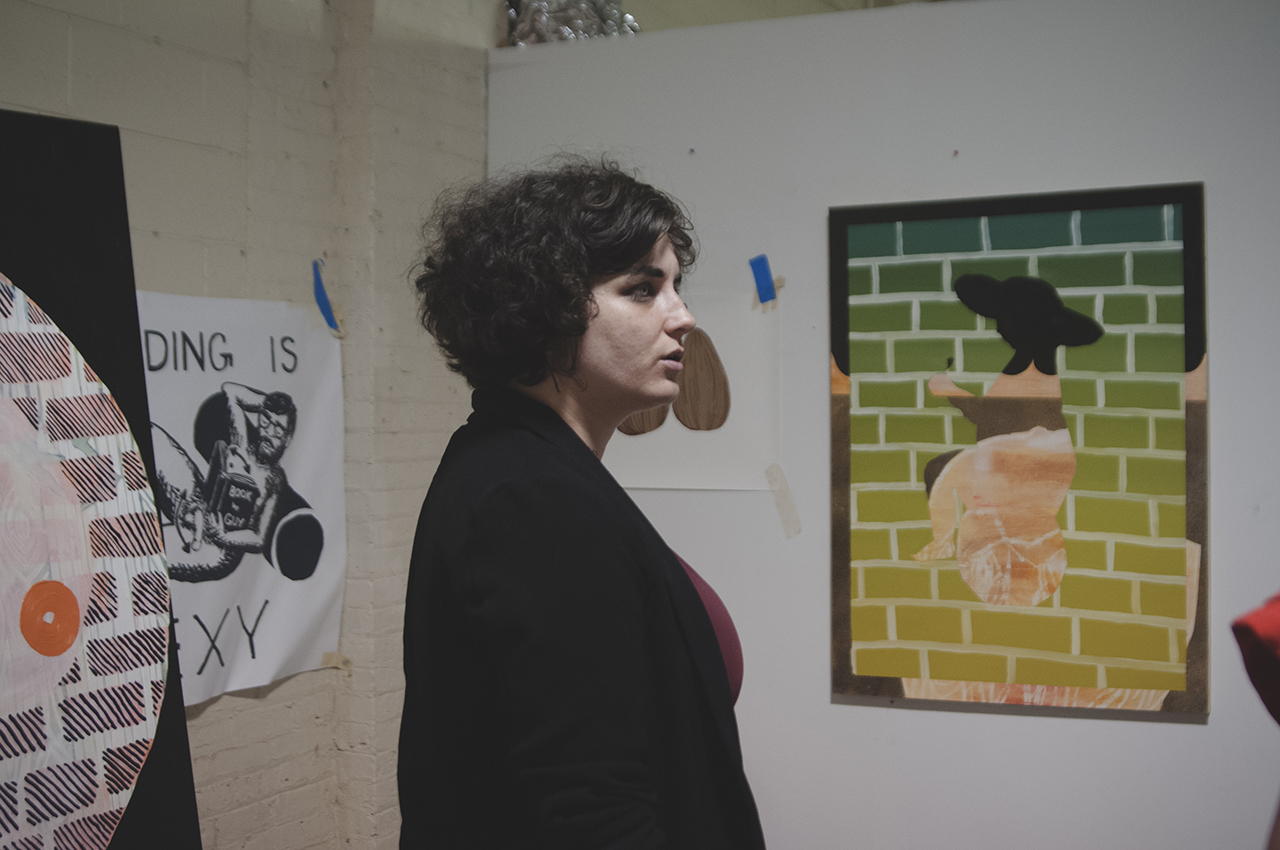 Often using comedic tropes as the subject matter of her practice, Jessica focuses on humor within her performance, drawing, painting, and comics. Relating comedy and art through their guarded expressions of vulnerability, she has begun to mask text within her work, forcing the audience to slowly absorb the words within their camouflaged environments.

I\W: Many of your works are inspired by stand-up, have you performed stand-up before?
JC: Yes. I have done stand-up, but only as performance art, which is convenient because you don’t have the burden being funny. For the context of art my work may be funny, but for the context of actual comedy it isn’t. This is convenient because I’m also kind of chicken. More recently, I performed some funny slideshows and narrative lectures at events like Brain Frame. The slideshows are comprised of drawings that I then speak over to tell some narrative. I did one that took the form of a fictional future police report about a person who shared my name. I think the precedents for this work exist in artists like Shary Boyle, Daniel Barrow but also comedians like Demetri Martin, who uses drawing extensively in his work. 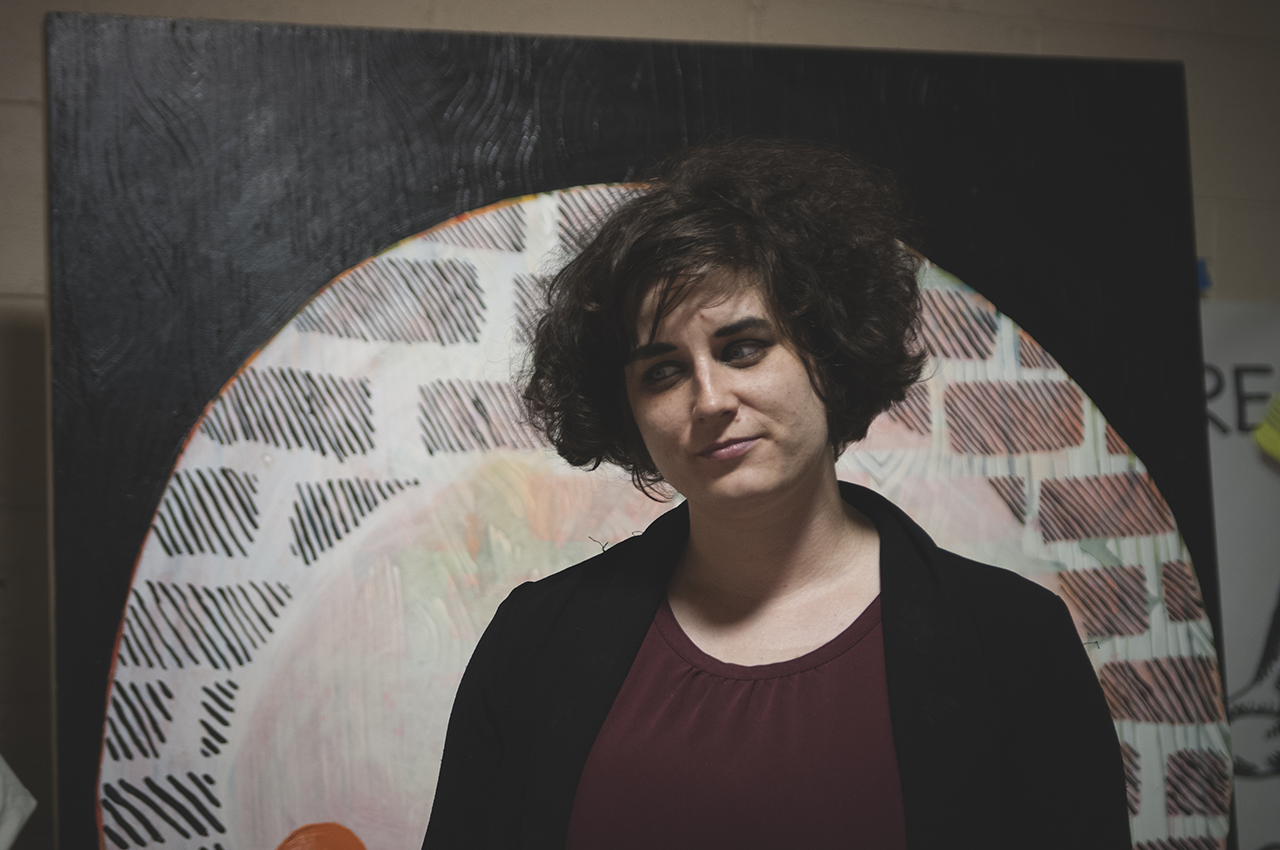 Would you say that you are a comic artist first and foremost?
No. I would say that I make comics, but I am more of a drawing person. Drawing is at the center of everything that I do, and the work expands outwards from there. I was in comics for a long time as my wage labor job. I worked for Drawn & Quarterly which is a graphic novel publisher—one of the best ones in the English language. They are in Montreal and publish Dan Clowes, Chris Ware and Lynda Barry—big cartoonists. I was doing that professionally for several years. I loved comics, but I was too intimidated to start making them until I left. Also, it’s a lot of work! I’m still learning, but I love them. I’m also a part of Trubble Club, a comics collective, with people like Edie Fake, Ben Marcus, Jeremy Tinder, Aaron Renier, and Grant Reynolds. I think there are more than 40 people who’ve been involved. The product of the group is largely jam comics. One person will do the first panel and then pass it to the next person and so on, then the best of those pages will be collected into printed books. For the latest book we published, for CAKE, we adjusted the model slightly. We each wrote a three-page story about an anthropomorphic hamburger and hotdog duo and then exchanged stories to draw them. I think that is indicative of the direction that the group is going to go. 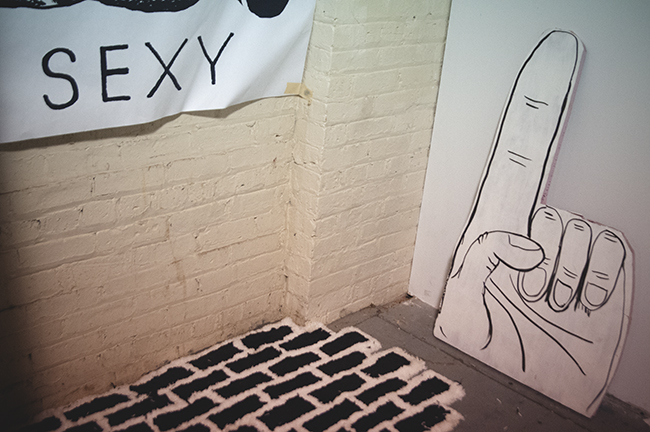 Do you like that comics give you a writing aspect to your work/practice?
When I first got into comics I already loved writing and visual arts, and comics felt like a perfect amalgam of these interests. I quickly learned, however, that comics are their own thing. The drawings in comics operate more like language than they do in a fine art context. They function in tandem with the words; the meaning is constructed through the relationship between the two. The medium is its own separate thing that is quite different than just imagery. I think there are ways in which comics can be more clear than fine art or literature, and that is interesting.

Do you feel like comics are more casual?
No. I don’t think that is true. Just look at someone like Chris Ware, whose books take an amount of concentration and energy that is unthinkable to me. When I make a comic it takes me a significant amount of time to map it out, and those end up generally being in the 12-page range. Making a painting is so much more immediate. You can just go for it. It if doesn’t work, you can just go over it; it is more malleable. If you are working on a comic and there is editing that needs to happen that is virtually impossible without starting the whole thing over again. You can’t just insert a panel in the middle of it. With painting you can gesso right over it. 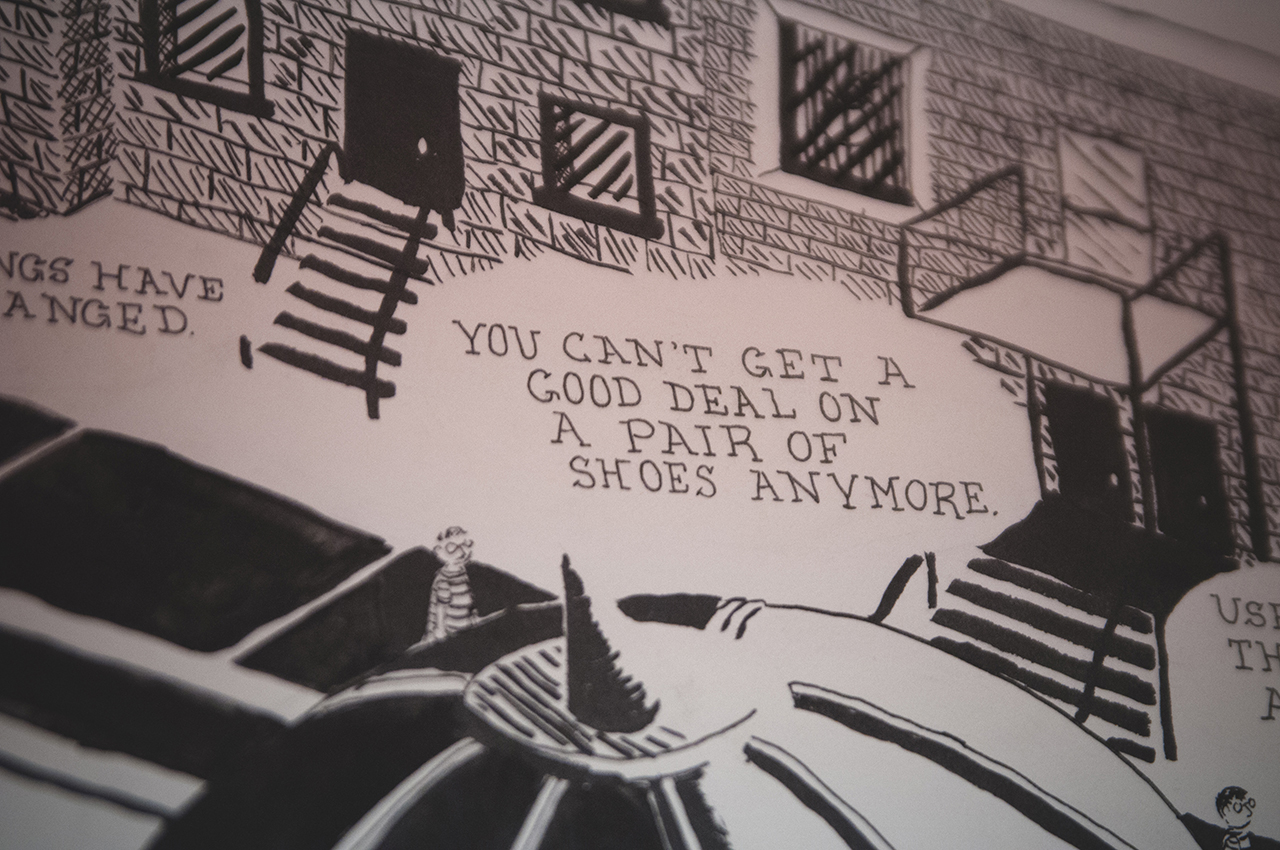 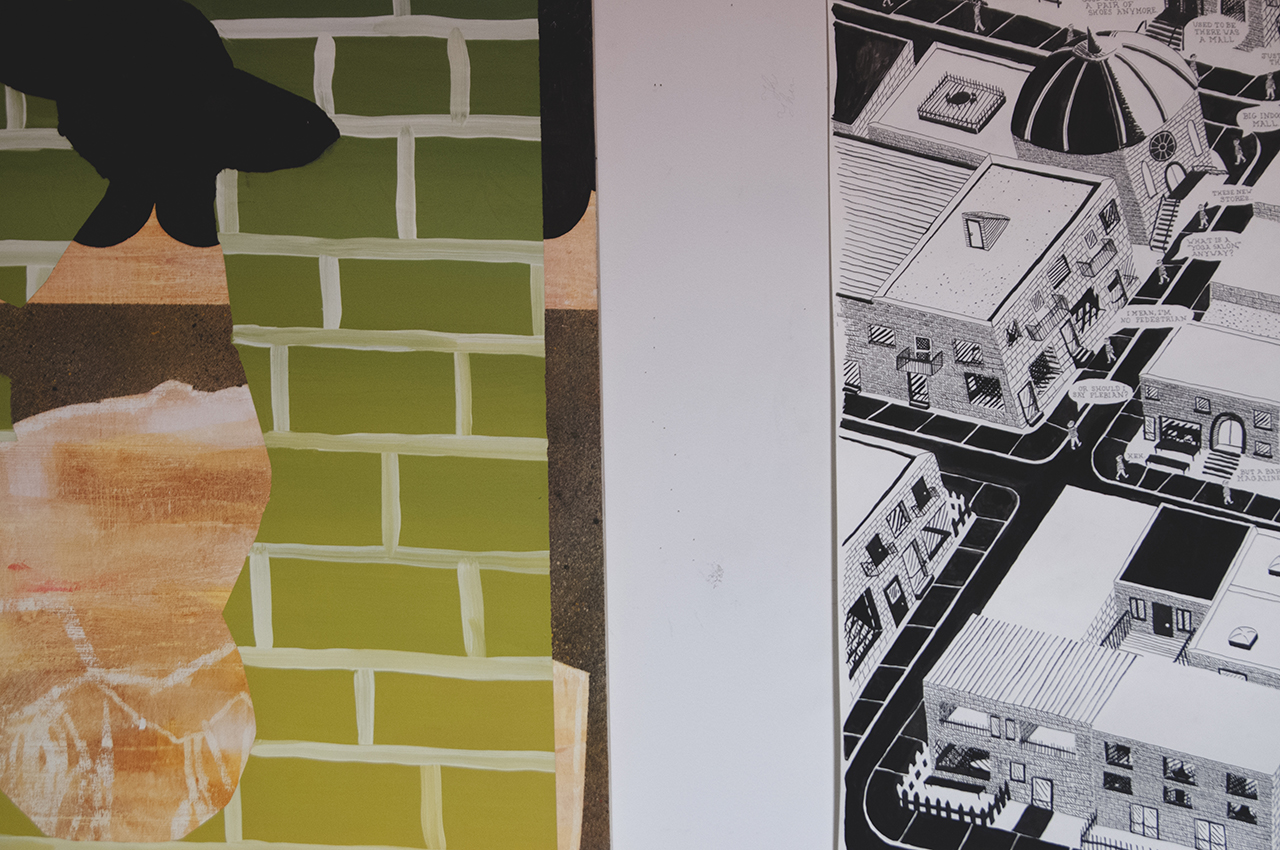 How often is painting incorporated into your practice?
Before I went to grad school I was painting all of the time and throughout grad school I was painting and then after I got out I basically haven’t been—just drawing. I paint with ink and gouache and wet material but the work is still in the drawing realm. I think that the division between drawing and painting can be somewhat arbitrary. I supposed that the line between the two for me is oil/not oil. I don’t really make oil paintings often these days, though I love them and could go back. Oil paintings feel like emergent things to me, like I will work and work at a surface and pull something out of it. The way I draw is very different, it’s often about executing some plan. And, while there can be surprises in this, the process tends to be a lot more rigid than when I paint. 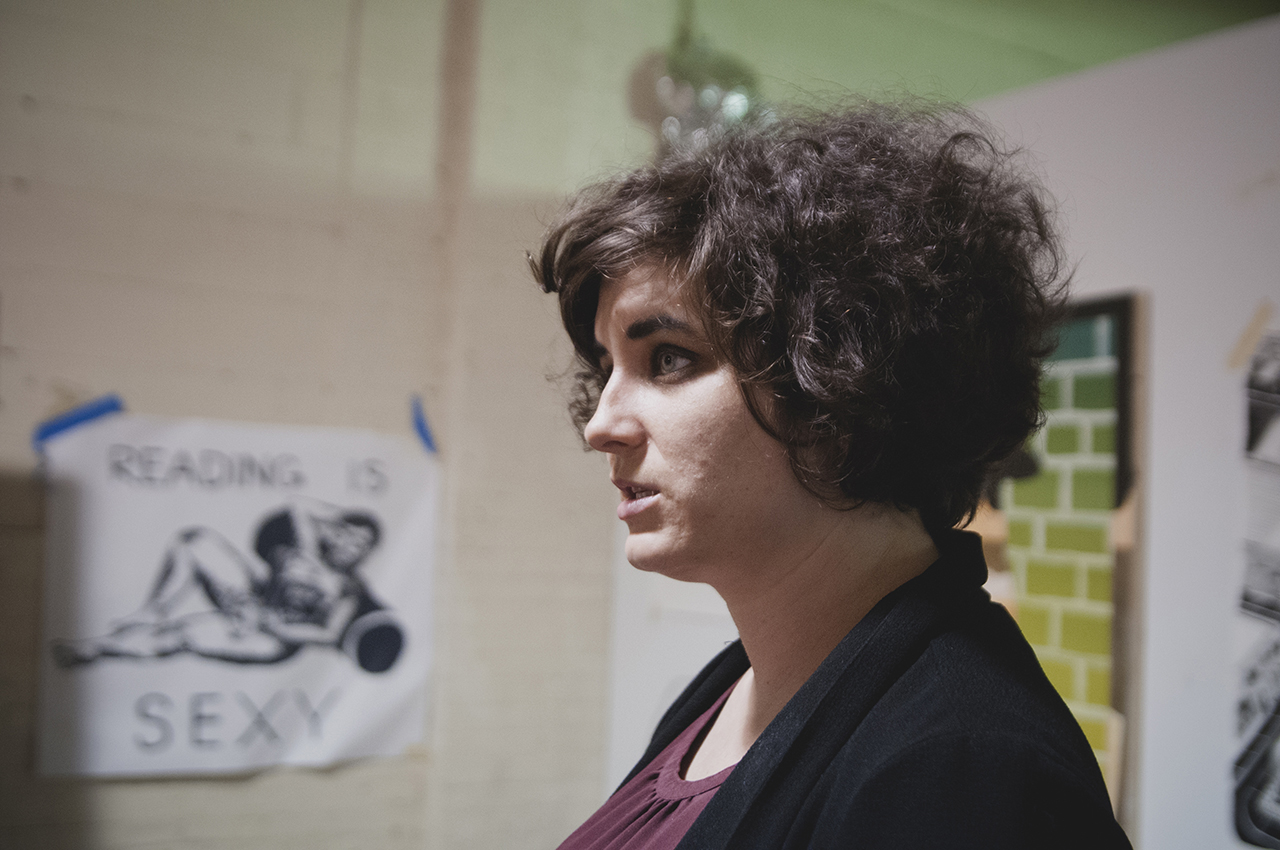 What is the purpose of camouflaging the words you have been incorporating into your newest drawings?
Over the last few years, I have started to draw these connections in my mind between stand-up comedy and adolescence, both of them existing as these positions of vulnerability. Comedy is a performance of vulnerability; the comedian is vulnerable, but it’s a controlled vulnerability, directing the audience to look one way as opposed to another. Adolescence is similar to that in some ways; it’s a position of vulnerability that the adolescent is constantly trying to obfuscate. Both comedy and art act as venues for expressions of vulnerability, but guarded and masked ones. There is this deflection and determining of how people see you. That was the impetus of masking the text in my work. I like the idea of using text, incorporating it, but also having it be unreadable. Texture and pattern does this obscuring. The text directs the viewer, controls the viewer’s interaction with the drawing in a way not unrelated to how a comedian surreptitiously controls an audience’s perspective. 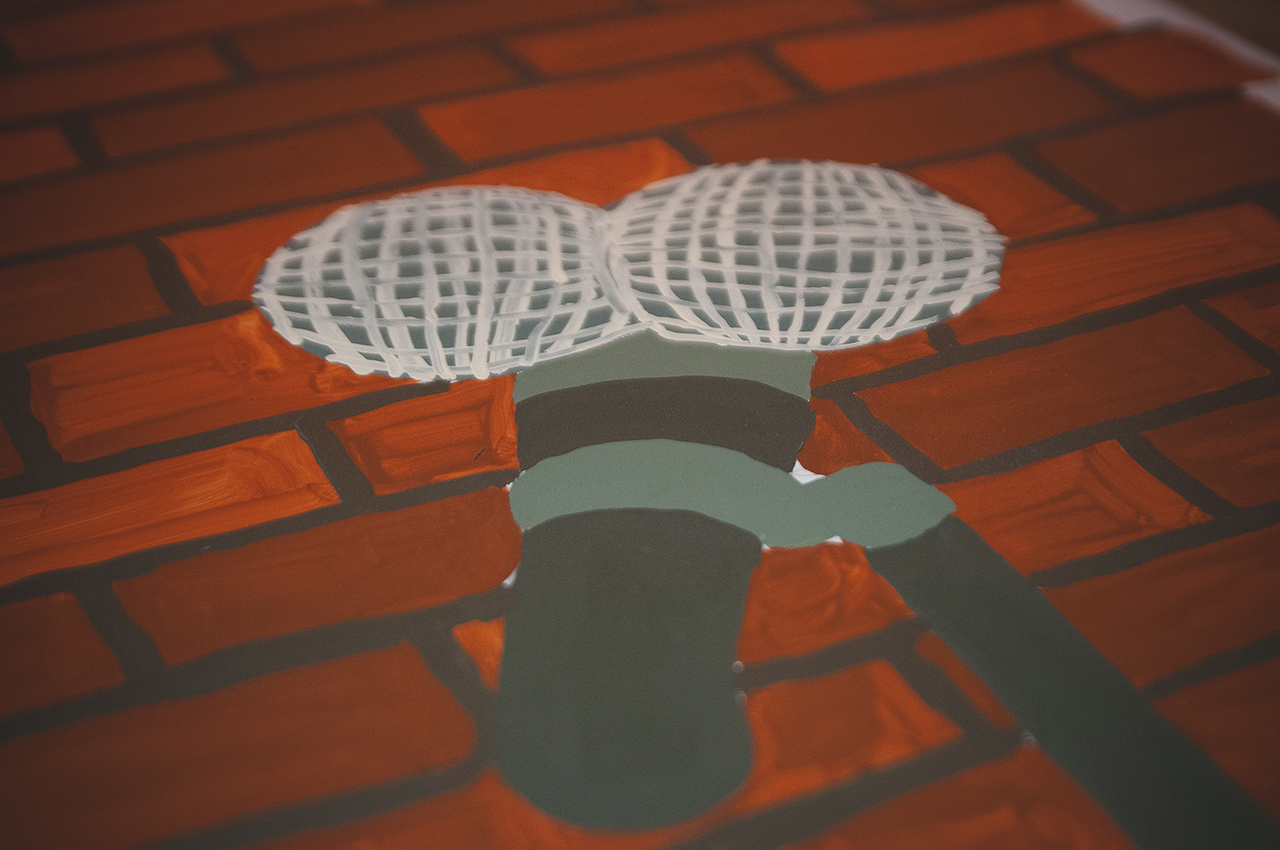 What similarities do you see between comedy and art?
I feel like speaking something out loud or making something publicly visible removes its power. You tell a story over and over and over again and it isn’t as potent as it once was to you. I feel that way with art, that it’s a potential exorcism. I don’t think that’s the case for everyone, but I certainly relate to this idea. If I make work about something that I fear and then put it out into the world, it won’t have the same type of power over me.

Both comedy and art act as venues for expressions of vulnerability, but guarded and masked ones. There is this deflection and determining of how people see you. That was the impetus of masking the text in my work. I like the idea of using text, incorporating it, but also having it be unreadable.

Do you consider yourself a comedian?
I am very interested in humor, which is how I got interested in comedy. Some friends of mine that were artists started working with comedy in Montreal in part because we felt like it is some sort of cheesy arcane art form. It didn’t seem very contemporary. It seemed sort of Jerry Seinfeld to me. We thought it was funny to do it as complete amateurs. We weren’t going to be good at it at all. As I have started thinking about comedy more and more it has become really abstracted from the actual thing—like using a brick pattern that becomes a symbol for public performance or humor. At this point it seems very dissociated from its source material. I am simply using the tropes of comedy. 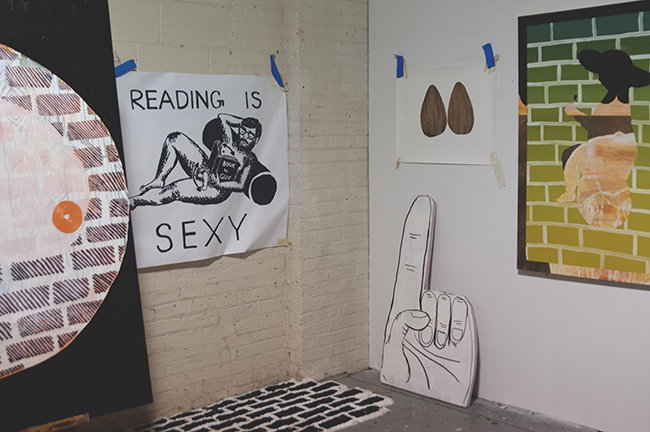 How are you pushing your drawings into the 3D?
With this new show at Roots&Culture, That’s What She Said, I started making everything in black and white, partly in an attempt to create a relationship between drawings and the 3D work. It is this aesthetic restraint that relates them to one another, since drawing, for me, is generally a black and white endeavor. While I was in school, I felt pressure to try to make everything go together. I had a lot of anxiety about connecting my comics to my paintings, or my drawings to my performances or whatever, but this seems less urgent to me now. Without intending to make it so, the work seems more interconnected now. It feels like a much more organic process. 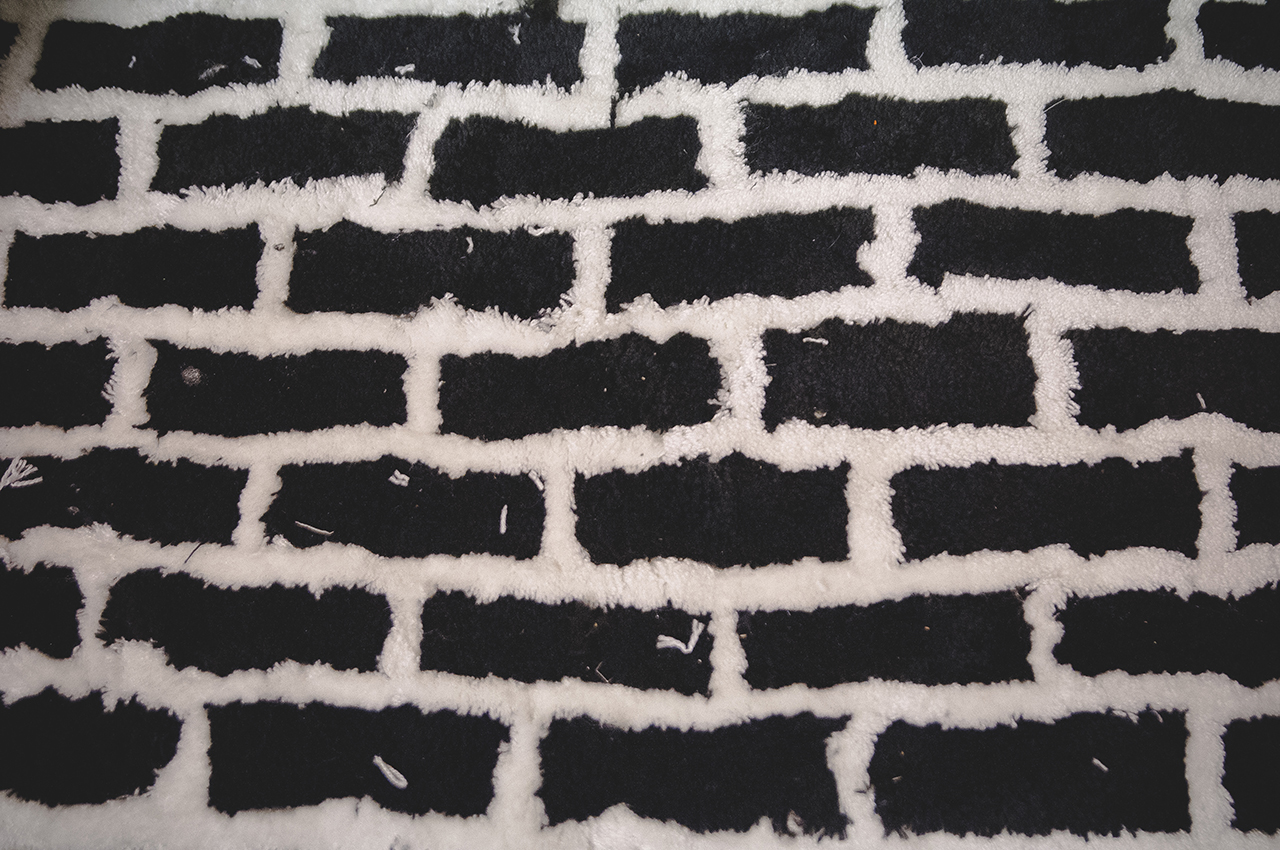