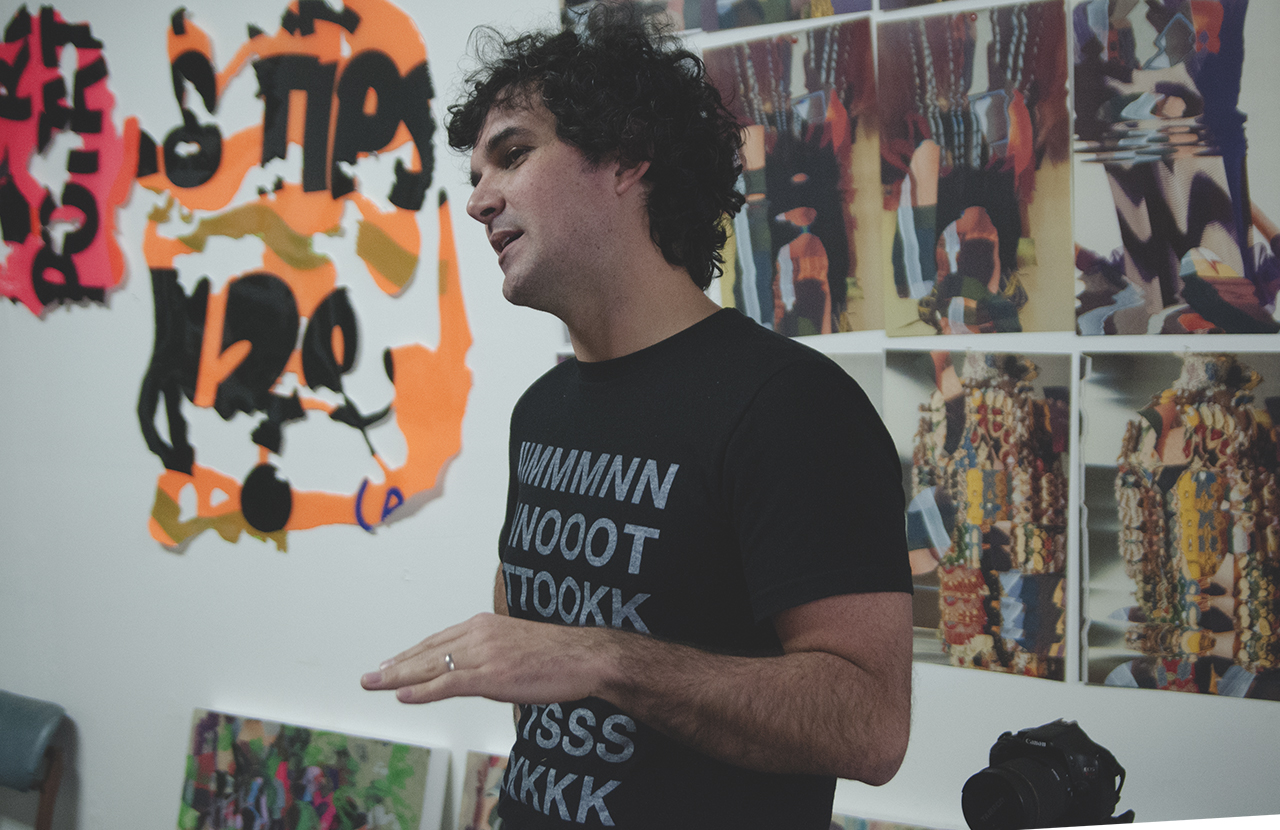 Layers permeate each aspect of Jordan’s practice, collages produced in resin, flatbed scans, and on video. Currently producing work created on flatbed scanners, Jordan prints, cuts, and layers back in elements that include photographs, paint, and imagery from books. Moving these pieces around on the scanner, he attempts to finds the perfect composition, often reworking original source material until the audience is unable to tell which elements are scanned, photographed or painted.

I\W: How has your practice evolved from collage-based works in resin to distorted flatbed scans?
JM: Part of it is just the expedient factor of being able to generate my own collage content. For a long time I really liked the mining of books and other texts. I enjoyed having to hunt for each specific piece, but that allure kind of wore off and left me with the problem that once you spend that piece, you will never get it back. It can be cumbersome to always get new material. The texts that I could previously manipulate were all old, and for a while I really liked that. There is just a certain point with any collage work where you have to decide if the pastness of the source material is something you want to own, or is something that is just automatic. With the flatbed scanner I can take several images and experiment with arrangements and then make as many copies of it as I want. I can go to the library at North Park where I teach and get new books that I couldn’t normally alter and scan them into collages. I think working with the flatbed scanner began in a very practical manner, and it evolved into a different way of working that has now allowed an infinite reproducibility. 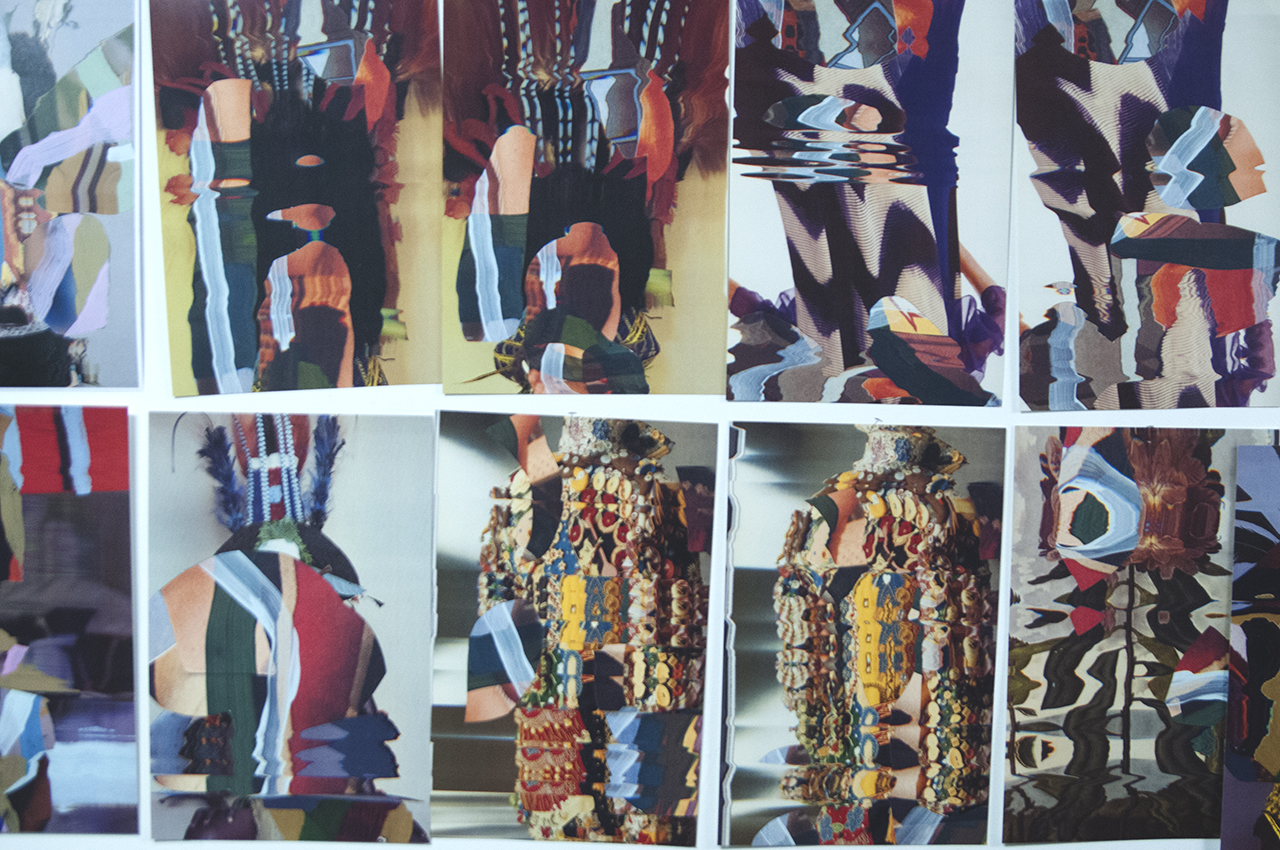 Why do you refer to these works as phenotypes?
A phenotype is a genetic form that has certain types of properties that have infinite variations. Digital media is a phenotype in that sense. I was thinking about how these same pieces of collage that are just moved differently are part of the same phenotype that I could theoretically makes hundreds of expressions from. So unlike previous bodies of work, these scanner-based pieces took on different implications because I could take one set of visual fragments and show them mutating slightly with each scan. Each one is related to the other, while being completely unique at the same time.

What source material besides books are you using to layer within your scans?
There are new books and then also older printouts. I will take past printouts I’ve made of other scanned collages and I will paint on them, cut them out, and put them back on the scanner with new material. Certain works have third or fourth generation pieces in them. There are also printouts I’ve made of photographs. I really like that sometimes you can’t tell the difference between what is collage and what is a photograph of a collage. I also integrate photographs of my computer monitor. At one point I wanted more imagery of football uniforms and realized I could just Google search images of them. I will Google a specific topic, expand the screen, then photograph them. The images have a grain which I can drag and distort on the scanner and add new textures.

It seems like you are then contrasting the digital from the physical, placing fabricated paint strokes alongside actual paint.
Exactly. I like the idea that something completely virtual can look really physical, and vice versa. Sometimes some of the physical qualities of the collage start to have a similar effect. I am using the same techniques of collaging in both ways of my working, where the physical collages are suspended in resin instead of being put on a scanner. I am trying to leverage similar visual effects by completely different techniques.

Does the physical layering of your collages relate to free improv music?
There is a certain thing in free improv music that I like which is this immediate success or failure. When there is a free improvising ensemble it is essentially a collaborative collage of sound. When I make collage I get to make my own decisions with what looks good where and what works well. With a group, when you make a choice, someone might read that differently and respond to it in a way that can lead to interesting results or complete meltdowns. I definitely have the later in my personal work. Most of my work goes through that stage. I try to treat them like ecosystems that develop and reach some sort of threshold where they will either get channeled into some final form that works, or I will push it too far and it will have a meltdown like Chernobyl.

How do your collage and resin coated pieces serve different pleasure points in your practice from the digitally composed works?
That’s getting right to the point with my resin pieces. When I first started making the scanner collages, I was really excited and really depressed at the same time. I very quickly had some effects that I was really into, and then I realized it was accomplishing what the work I was doing before had achieved but with 5 percent of the effort and investment. It makes these works seem almost futile. I am a little more at peace with it now because I think the physical works are now doing something the others can’t, and I am also realizing that they are more of a visual training ground. I don’t want to say that these are practice, but a way to cultivate ways of seeing. Part of the reason that I feel the scanner pieces have been so easy and quick is because I had spent hours, days, months, years on these. I don’t want to relegate these to drafts, but I did realize the importance of these for me is about a place to develop strategies that get deployed in videos or other works. 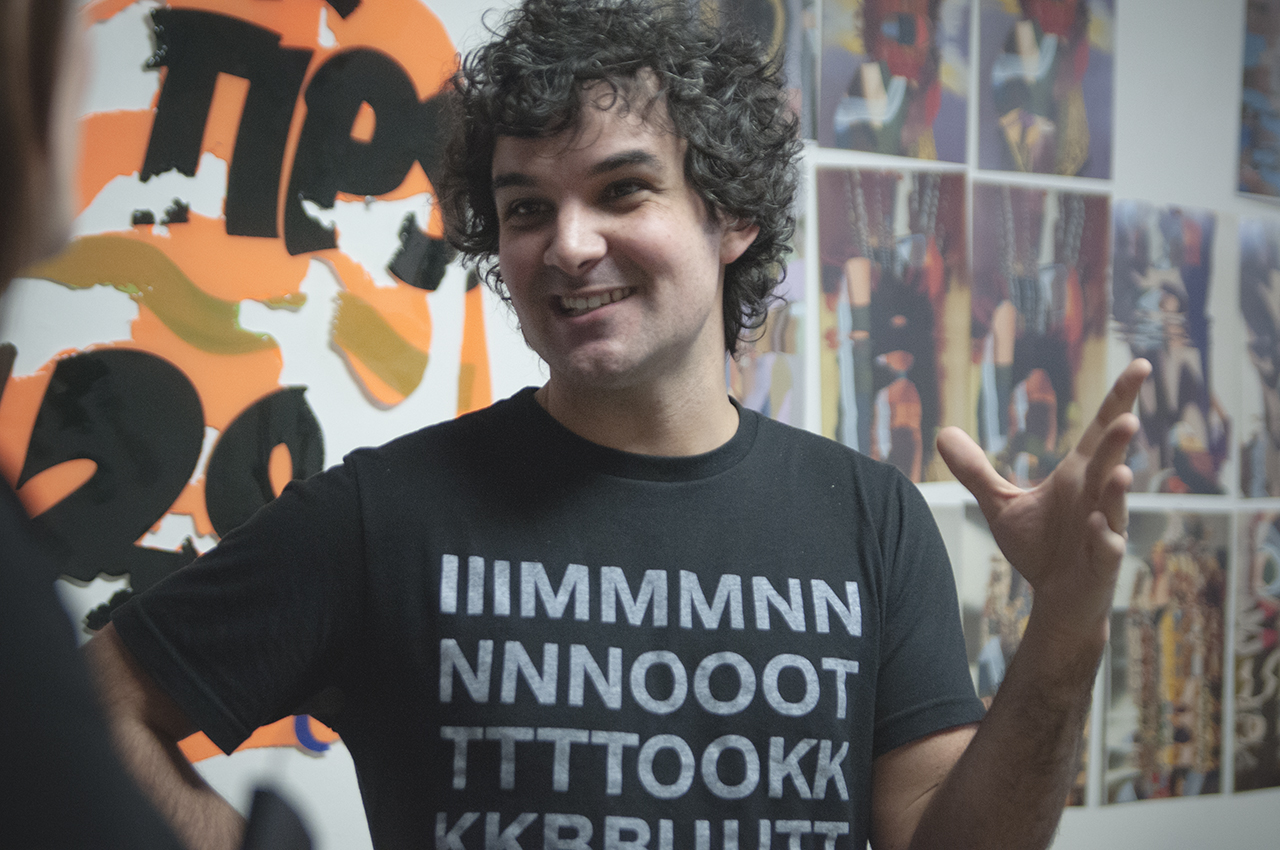 How do you incorporate video into your practice?
I dabble in music videos, but then I also have an upcoming exhibition at the SUB-MISSION that will be a video. In the piece I will be creating a 3D collage stencil out of videos. I am going to build a false wall in front of the back wall of the gallery which I will cut a hole in. I am going to have a projection inside the piece as well. It is going to be a trippy piece that is again made from layers. Part of the idea is the exploration of the physical distance. Will it be perceptible when you walk in? Will it collapse? Or will the back projection come forward in space? It will definitely get psychedelic. Part of the reference point is of a certain history of visual didactics. Abbott Thayer was this late 19th century painter who basically invented camouflage and he made these stencil demonstration kits where he would cut out the shape of a duck and put it in front of a field to show how the field’s natural pattern immediately looked like a duck’s coloring once the outline was imposed on it. To a certain extent there was this act of collage already at the beginning of the invention of camouflage. The other reference point I am thinking about is this moment right after the Bolshevik Revolution there were these avant garde artists doing this thing called psychotechnics. The premise was that the proletariat needed to be liberated from their automatic vision, so they made these laboratories for citizens to come in view these visual didactic space installations and come out cured of bourgeois vision. I am very lightly suggesting that this space is going to be similar, but with no goal. It’s more based around if a can viewer recalibrate their own senses to the video installation. 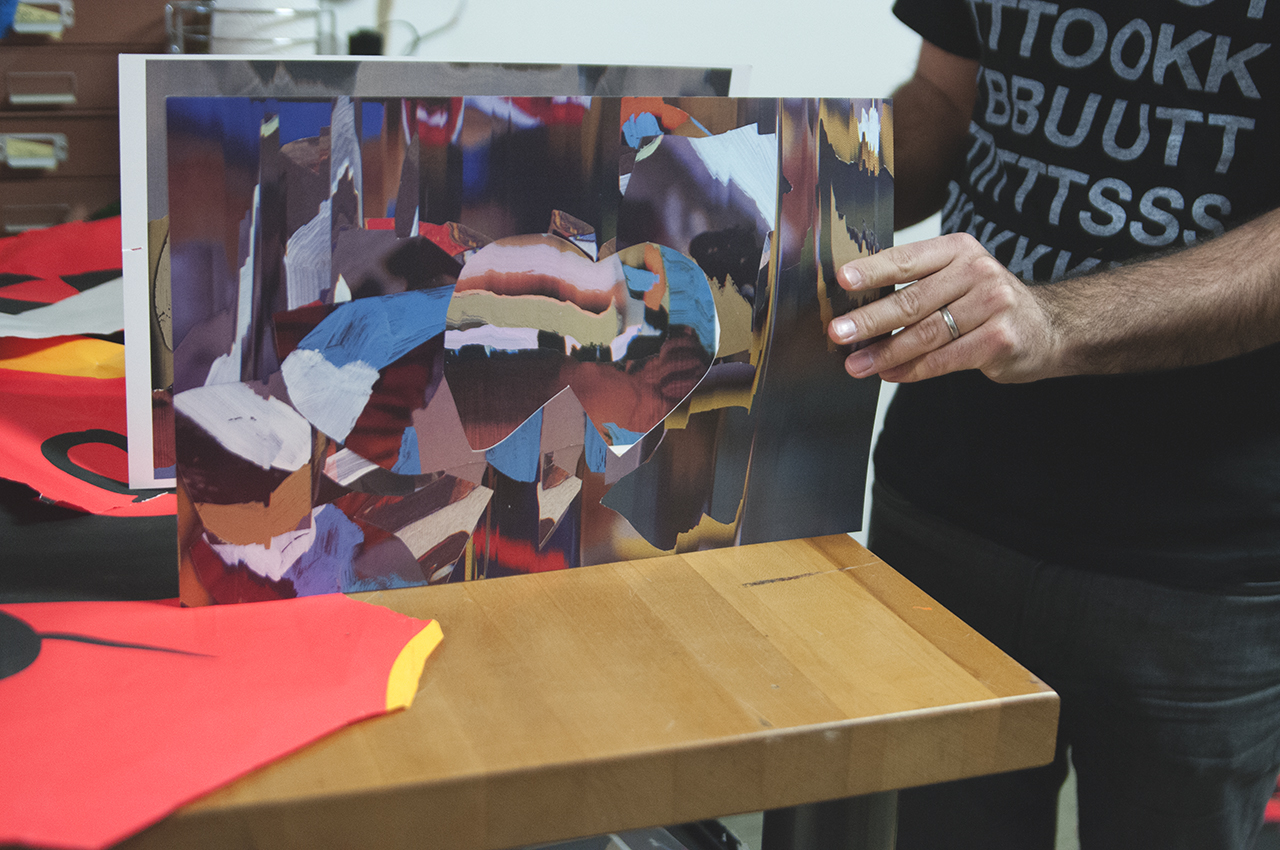 I love your reference with your work title Ghost Nets. Can you explain your thought process for relating this idea to your works?
I think it is a really interesting metaphor for collage because you have this assemblage of lost or obsolete nets, which are these capturing devices that have something textual about them too. The idea that they have a life after their function is extraordinary. They can form these complex ecosystems that allow for marine life to grow on them and fish to eat out of them. I feel like images are texts that we eliminate a lingering sense of a narrative or ideology from. The idea that they can still nurture you or insnare you is interesting. I was applying the title based on that. The function of certain elements can flip—a net or piece of garbage that is in the ghost net had one function when it was being used, and then when it got sucked into this weird assemblage in the ocean it got repurposed. That is what language does, and that is what collage is about for me often times. Recently I’ve become more concerned with the visual effects of what I’m collaging, but the visual anthropology of the pieces has always been important to me as well.