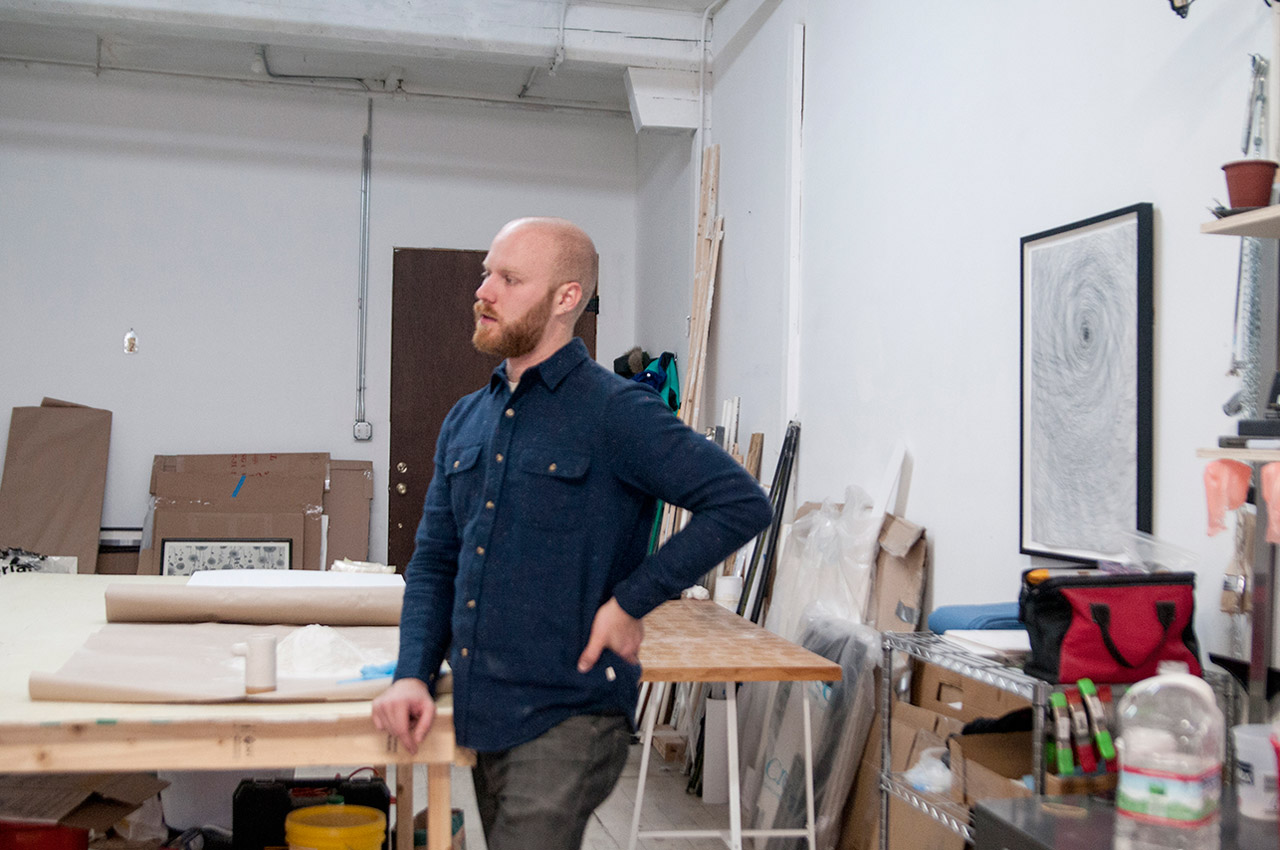 Joseph is an archivist and sculptor who encourages his audience to participate further than a momentary observation of his work. From his studio in Garfield Park, Joseph subtly manipulates materials to share experiences that cannot necessarily be seen.

I\W: How did you move from photography to installation?
JR: After school I stopped making photographs because I couldn’t pinpoint how I wanted them to work for me. Photographs weren’t doing what I wanted them to do, so I started making work with other materials. It gave me a lot more fluent language to work with. I figured out other ways to work.

How does photography mock installation work and vice versa?
I don’t know across the board, but for me I set up problems for myself and the way I solve them in theory is very photographic. One of the early works I made, “Long Life is in Store for You,” is an impression of a redwood tree on paper. I knew I was going to the redwood forest, and I wanted to interact with the trees. Initially I thought I needed to photograph a huge, historic, ancient tree. I had to make something with it, but thought a photograph wouldn’t work. How can I describe the life and the presence of something so enormous and so old? The way it trickled down was touching it and rubbing paper onto the tree, basically being with it and feeling it. The final piece is kind of photographic because it is the result of how to image something that isn’t here.

I would much rather have an indexical experience with materials, with objects, with everything around me than to photograph it. It creates a distance that became really uncomfortable with me, and I think that is why I moved away from photography. 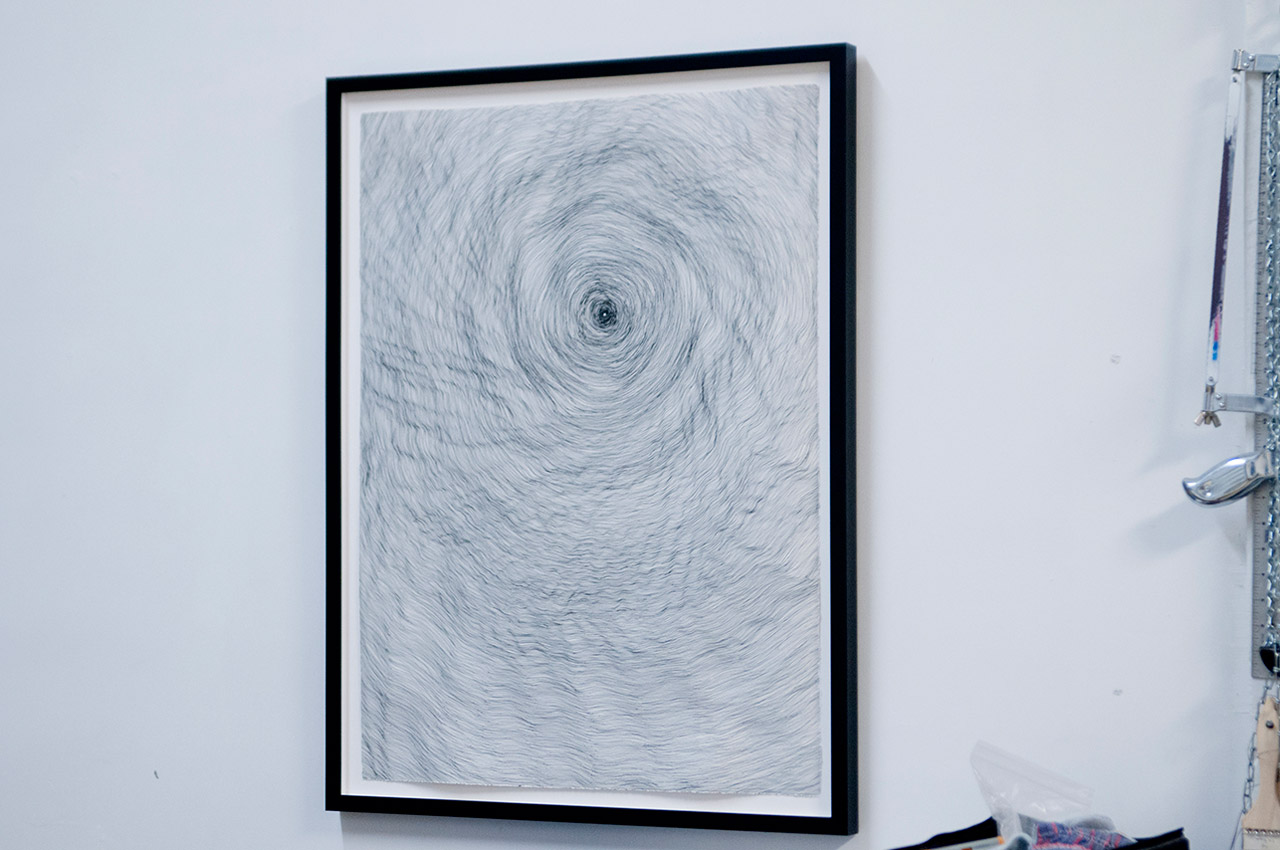 What senses do you like to play with in the viewer’s experience?
I really like asking people to basically build artworks, to complete them by way of imagining what has happened or what could happen within a work.

I did this piece called “Stalactite Meeting a Stalagmite” a while ago, and for me that was the first work like that. The piece itself is like an at-home science experiment, but it’s only completed when you imagine thousands of years of growth of this thing and that stalactite meeting that stalagmite. It has a lifespan of like 10,000 years, and every moment of its life it is moving towards one another. That moment right when they meet. You don’t see that. You have to become a part of the work. I like the push and pull and asking somebody to participate.

What are you working on right now?
This piece will be called “Puddle” probably. They are all mouthfuls of water spit into dry plaster so they form themselves into these cellular looking sculptures. The form is dictated by how the water moves through the plaster and how quickly it solidifies. They are really quick drying, like 20 minutes. All of these I made in probably a week and a half altogether.

What I love about it is I have almost no control over it. It is something that makes itself. It is kind of a way to reformulate a material. Taking water, letting it make itself into a sculpture, then putting it back into its form. It’s closing a loop while opening a new one. It sets up a new scenario for how to think about materials and the way things are made and how we appreciate them. 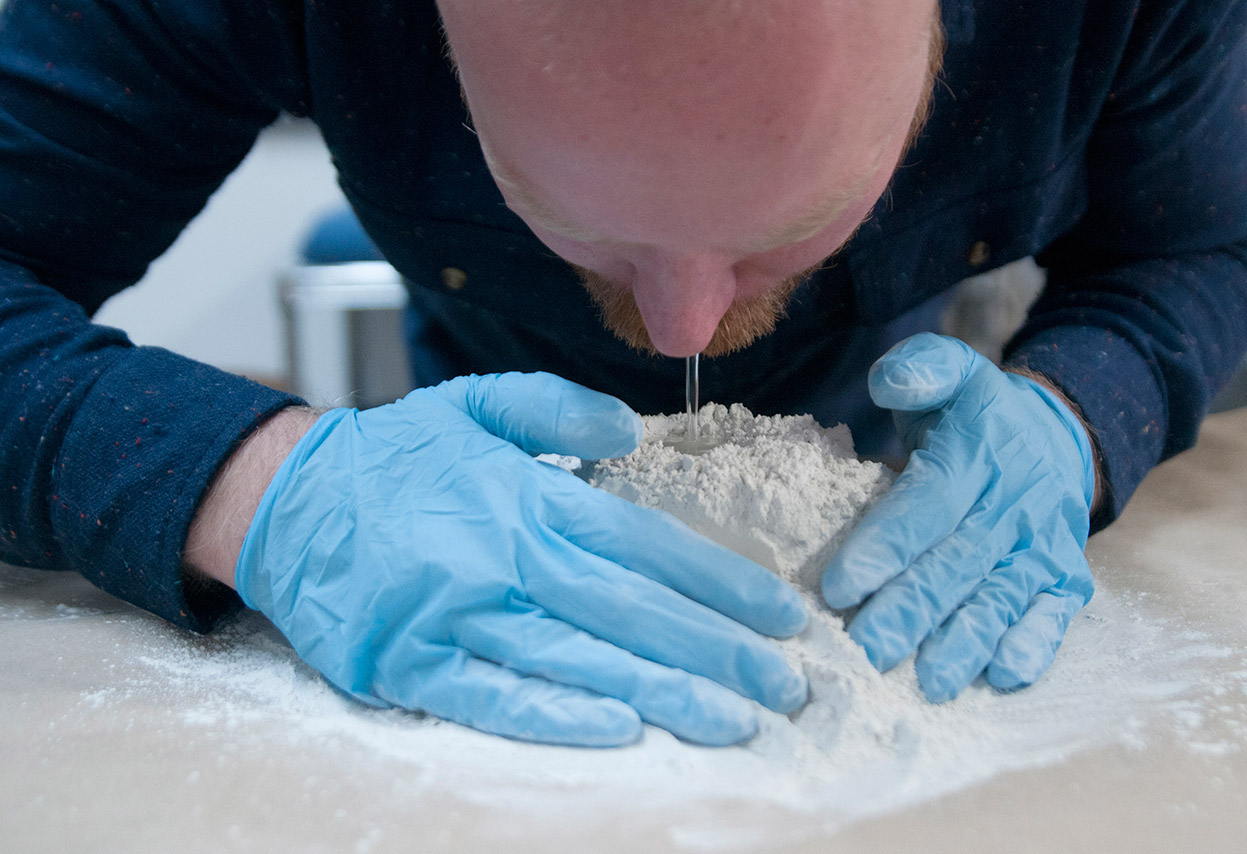 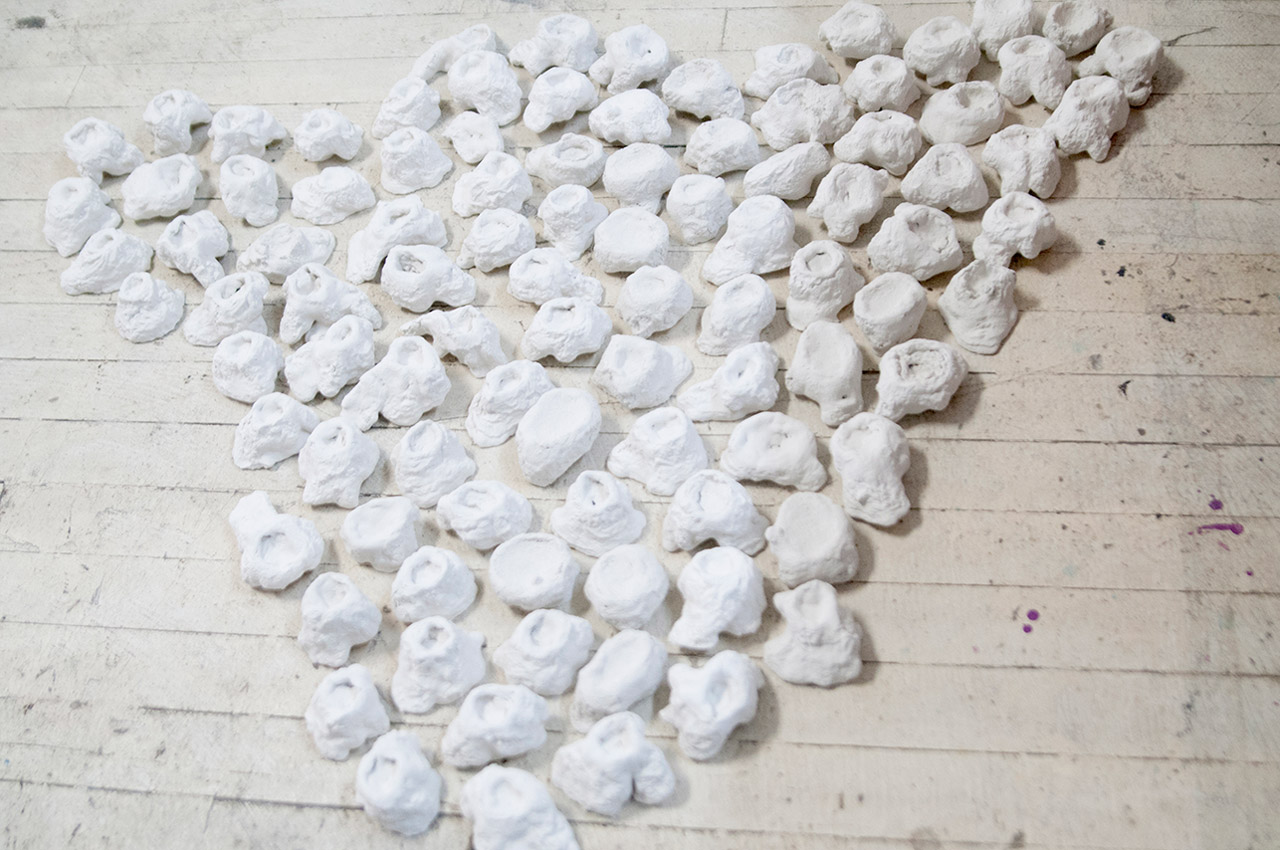 Do you spend more time focusing on the concept of your pieces, or the execution?
I spend a lot more time on the concept end and planning. I like to keep the making as simple as possible and as true to the materials as possible without much interaction from me. I am making these units of measurement, and letting the rest come together.

Are there restrictions you give yourself to help set up the rest of your work?
It’s kind of piece by piece. There are no hard and fast rules that I am following. Everything kind of ends up revolving around similar concepts or feeding off of past works and growing from them. I don’t have a strict format for how I make decisions, but I do try to keep the decisions as simple as possible and as honest to the concept as I can.

How has collecting others’ work influenced your own?
It gives me the time to appreciate others’ work more, and appreciate it by having a direct experience with it and being around a lot of work. Aside from Hornswaggler, I also collect a lot of my friends’ work and we do a lot of trades. I think about art all the time and it’s great. I think about it differently than a lot of people do because I am always interacting with somebody’s work. 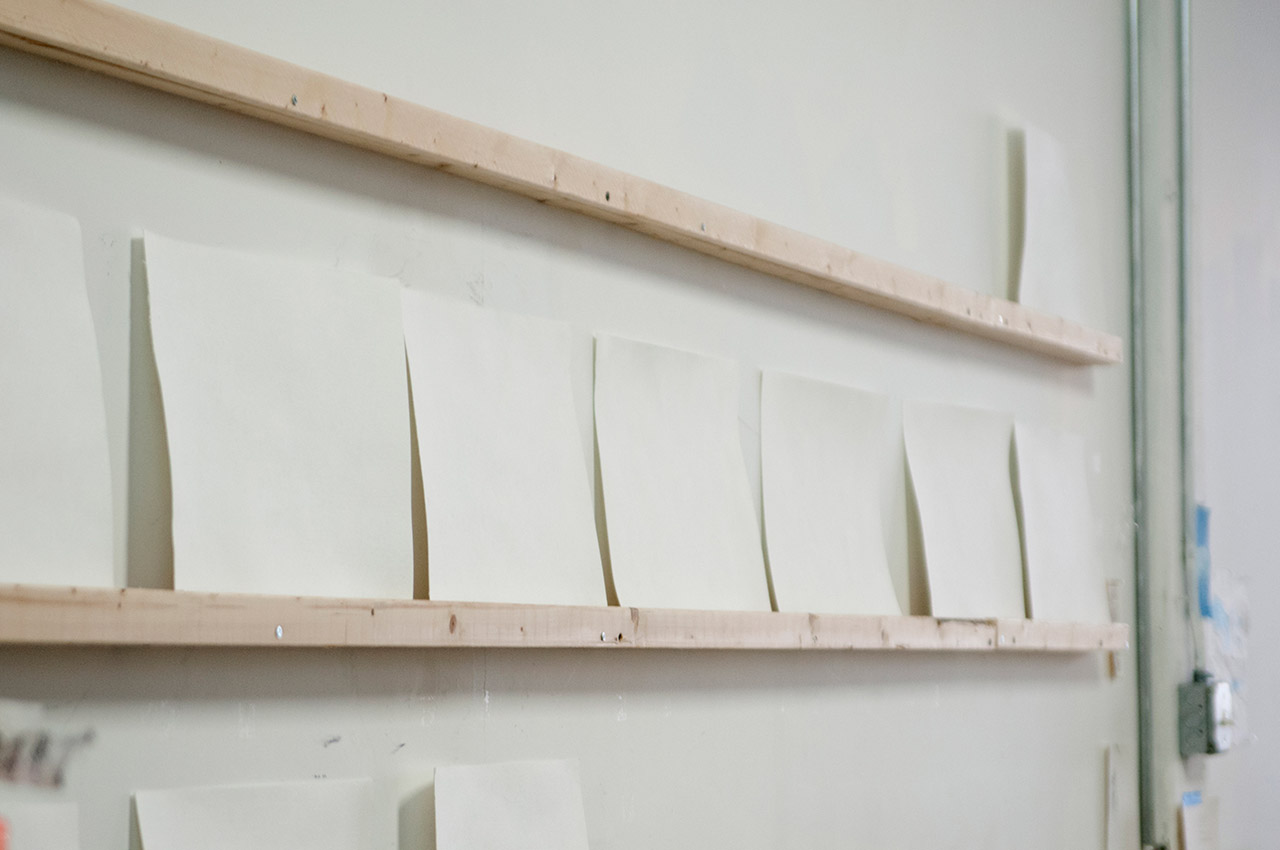 What kinds of thought patterns does that give you being inundated with art all the time?
It makes me a lot more careful and a lot more decisive and intentional. I feel that it really clarifies my intention because I know what I’m drawn to, and I know what I hate. I feel like my taste in artwork has grown a lot in the past couple of years because I am always thinking about it.

Will you explain your series “Eleven Days as a Landscape Painter?”
At ACRE a couple of years ago I made these works outside my studio. I would mix all of this watercolor pigment and I would spray it onto wildflowers outside the studio and I would press the paper onto the wildflowers so they made these automatic paintings. There is one for each day of the residency. Then starting on the first day of the autumnal equinox to the winter solstice I erased one per week with a brush, water, and paper towel. Reverse painting it really. I erased them all, so now they exist as this document of a period of time and of the lifespan of the wildflowers. As the season passed, they died. 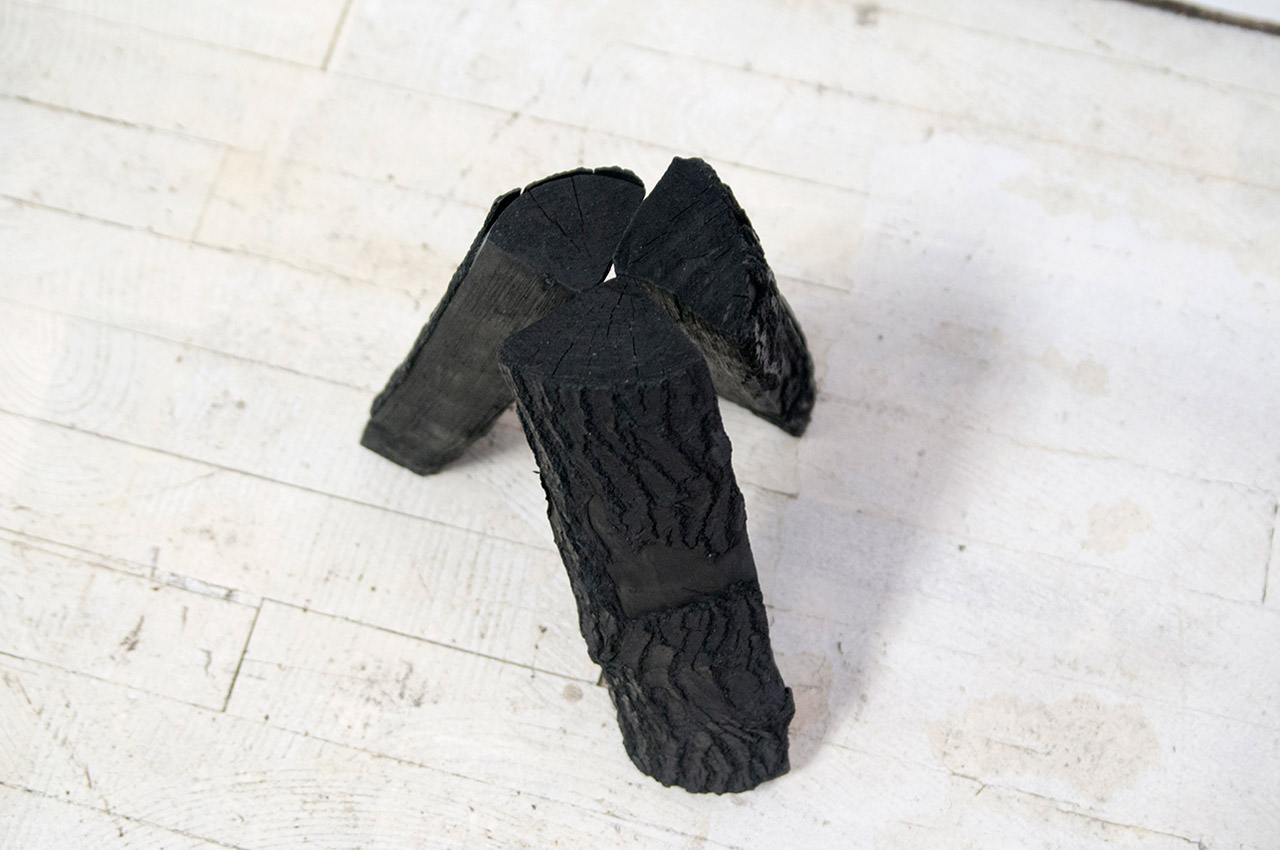 How do you connect the ephemeral with the present?
By a simple manipulation of materials. “Cairn” does that in a lot of ways. It was a part of the show I did at Johalla Projects in June. They are meteorites bought from eBay. A cairn is a marker on a path or a memorial monument made of rocks piled together. In the context of the show, or even out, I wanted to talk about the way that outer space is constantly, to some degree, falling to the earth. So these represent the cosmos and instead of reaching outside of ourselves, of our world, that outside is coming to us. The complication with them is that they are bought from eBay, they are certified by some meteorite expert, which could be a lie. These could be bullshit, but in order to believe that this is from outer space, that these things came form nowhere, you have to allow yourself to trust this eBay person. That these are real comets, pieces of interstellar matter. It is suspending your disbelief. It is a marker for that desire for something we can’t touch, to have outer space.

What other elements that you can’t quite grasp fuel your wonder in your work?
Time. That was the crux of the exhibition, “Arrangement for Endlessness.” It was basically setting up the scenario that if you choose to believe it, a pole and a couple of mirrors extend through the earth in two directions and skewer the planet. It creates this illusion that inspires that wonder. It opens the gallery space up to eternity. It exits in two places. Here in Chicago, in the gallery, and then on the other side of the world exactly is the middle of the Indian Ocean. I dyed a piece of fabric to match the Google satellite map color of that point in the Indian Ocean. Then that was dipped in saltwater that matched the salinity of the ocean then blown by a fan to have the fabric undulate. That would drop saltwater onto the floor, and salt crystals would form. It made this mock ocean material.

Do you often use technological resources in your work?
Not a lot. I guess really that piece was the first time that I really leaned on the Internet for something—for data. It is definitely a possible source for anything. It is an interesting way to braid information into work and to let things be informed by some solid data that could be a lie. 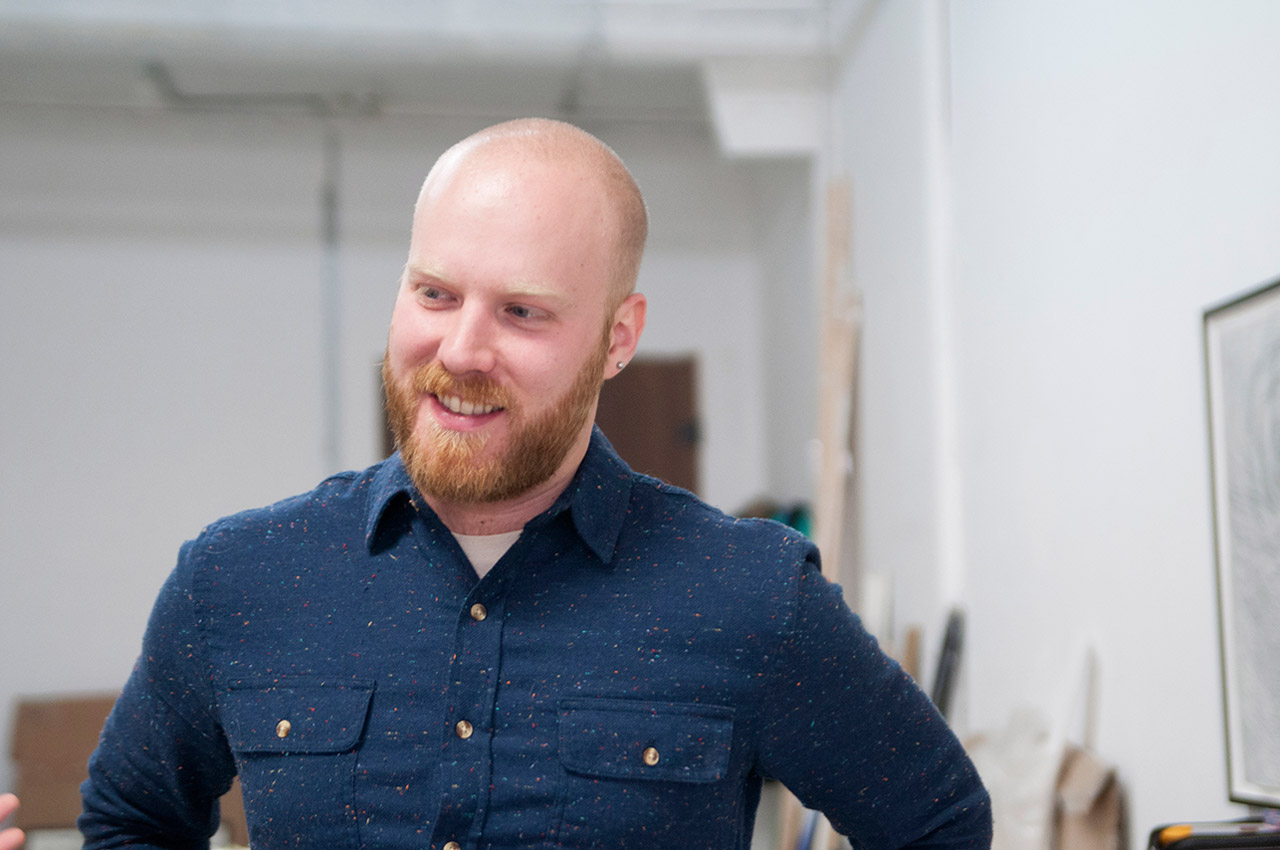 Do you still take photographs?
Rarely. I am really pleased to have set down the camera because it imposes an interface that is blocking this. Instead of talking to you, I am photographing you. Instead of photographing some fake logs, I am making them. I would much rather have an indexical experience with materials, with objects, with everything around me than to photograph it. It creates a distance that became really uncomfortable with me, and I think that is why I moved away from photography. It was blocking something. It was blocking what I was trying to say.

Do you think about your environmental impact while creating your work?
No, not a lot. I try to stay removed. I try to keep myself out of the work, keep my hand out of it. The materials I use are very simple and common. Nothing really toxic—except resin.

Do you feel like your work is more conceptually driven than aesthetically driven?
Exactly. It almost doesn’t matter what the work looks like. I am getting really comfortable with the idea of making stuff that is not pretty—like those spit piles. They are kind of ugly but that is OK because the concept is what holds it together.