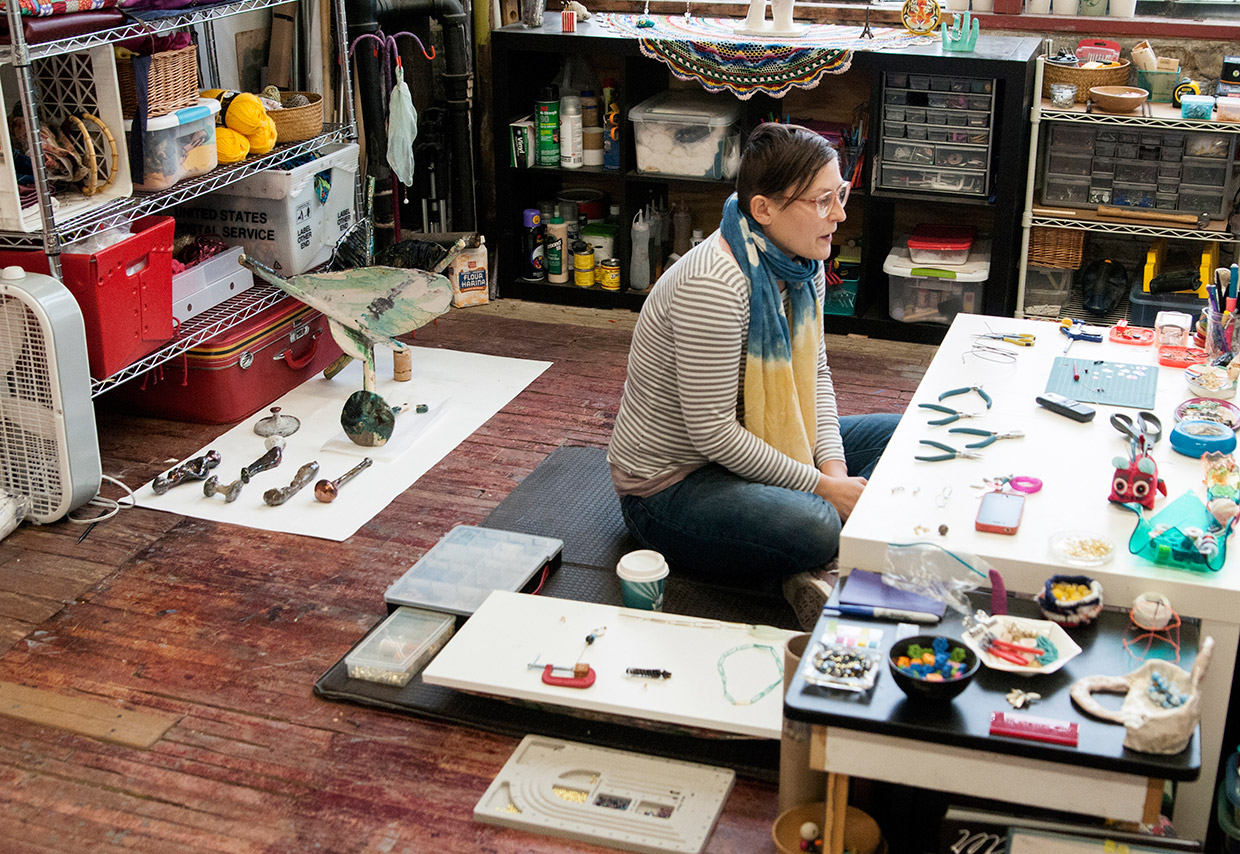 Karolina currently works out of a second floor studio in Garfield Park, but her beadwork, weavings, and sculptures exist somewhere in the 1990s. With influences ranging from Led Zeppelin to horror films, Karolina seeks to expose the drama that lies behind her taut textiles.

I\W: It looks like your studio space is set up like a shrine or offering.
KG: Someone called it my zen crafting station. I can’t work at a normal-sized table—I always have to be cross-legged on the floor. I am queen of not getting up, rolling, and reaching. 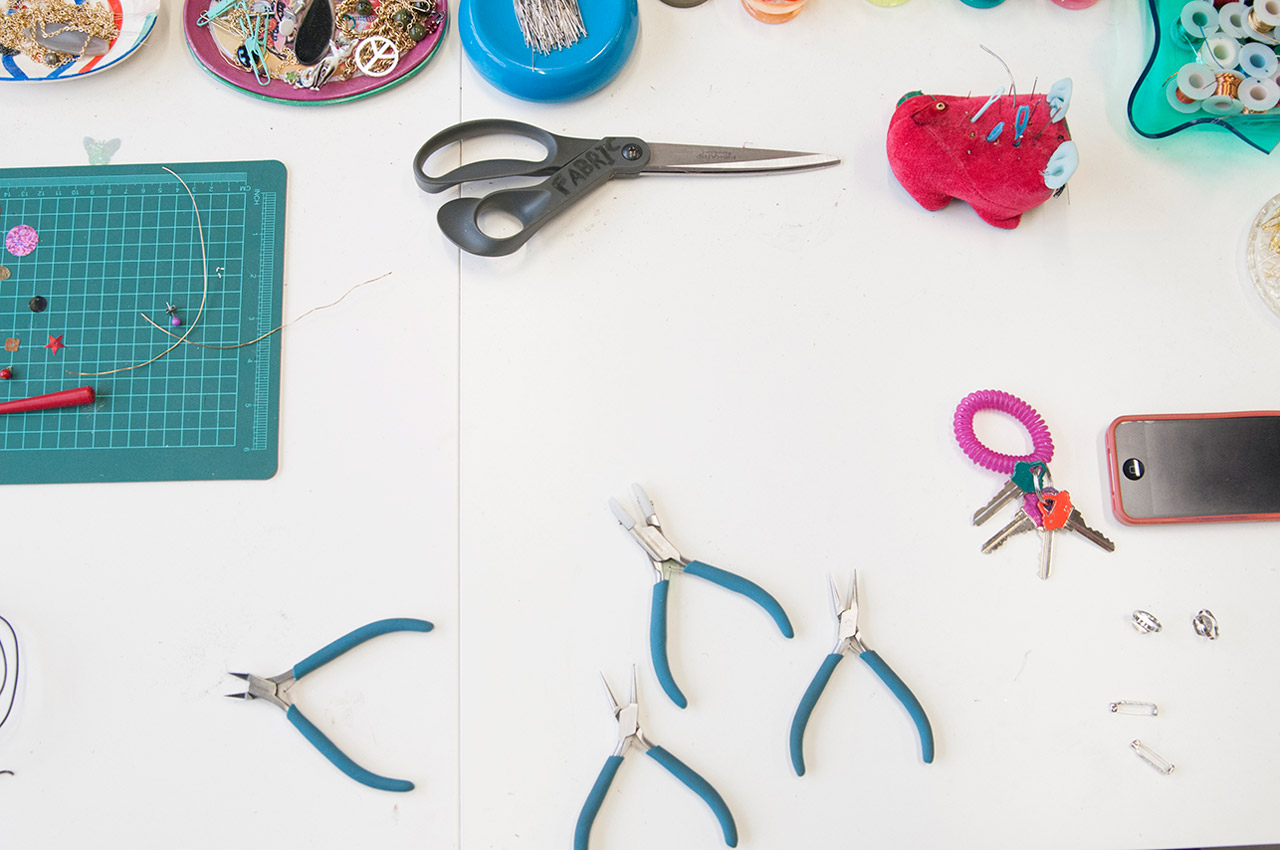 Why do you feel inspired to create drama in your pieces, and how do you achieve this?
I wasn’t born in the states. I was born in Poland, but I came over at a very young age—I was four. I didn’t speak the language, but we had a television and it was basically my babysitter. Both of my parents would leave me for about an hour and a half during the day when their shifts overlapped, and I had to wait by myself with the TV for my brother to come home. He was a maniac, insane—an older brother. So it was this calm before the storm of him coming home. My dad would turn on cartoons, and I would turn to MTV. It was all drama. It was early to mid-80s, MTV was really young. They were getting away with a lot of strange content that just wouldn’t be aired today. It was almost completely improvised with the VJs. I was really struck by how I was able to understand the videos without understanding the language. The music added drama and a sense of timing. I am not much of a movie watcher, but I love shorts, videos, and things like this. So I think it comes from that. Just trying to use a material culture and edit and splice it together in a way that creates a narrative, and times itself out in the way a video would.

In which stage of your artistic practice did you begin to work with textiles?
I think I was always very interested in it, and it was always around. My mom always had weavings—these narrative tapestry weavings of people in carriages going across landscapes, and still life vases with flowers in them. It was always around, but I wasn’t aware of it as a conceptual art form at all. I knew I wanted to go to art school, but I really didn’t know how to draw well. There was a point I remember when I had a drawing assignment for homework and I just didn’t want to do it, I hated it. But I would craft shit like crazy. I would make my own clothes and I would put things together and I would make collages and anything that was more tactile. Haptic activity was really attractive to me. I ended up going to undergrad in Philadelphia. I went to the Fiber and Materials Studies senior thesis exhibition and I was like done. Got it. Understood. 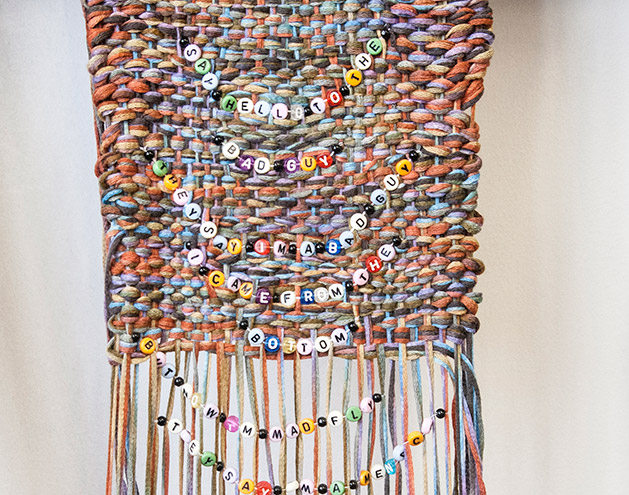 How long have you been in this particular studio for?
This summer was a year, so maybe a year and six months? A big selling point of this studio is that when I walked in, the view out the back window is really similar to the back cover of Led Zeppelin IV. I immediately moved into making this whole body of work completely about Jimmy Page. 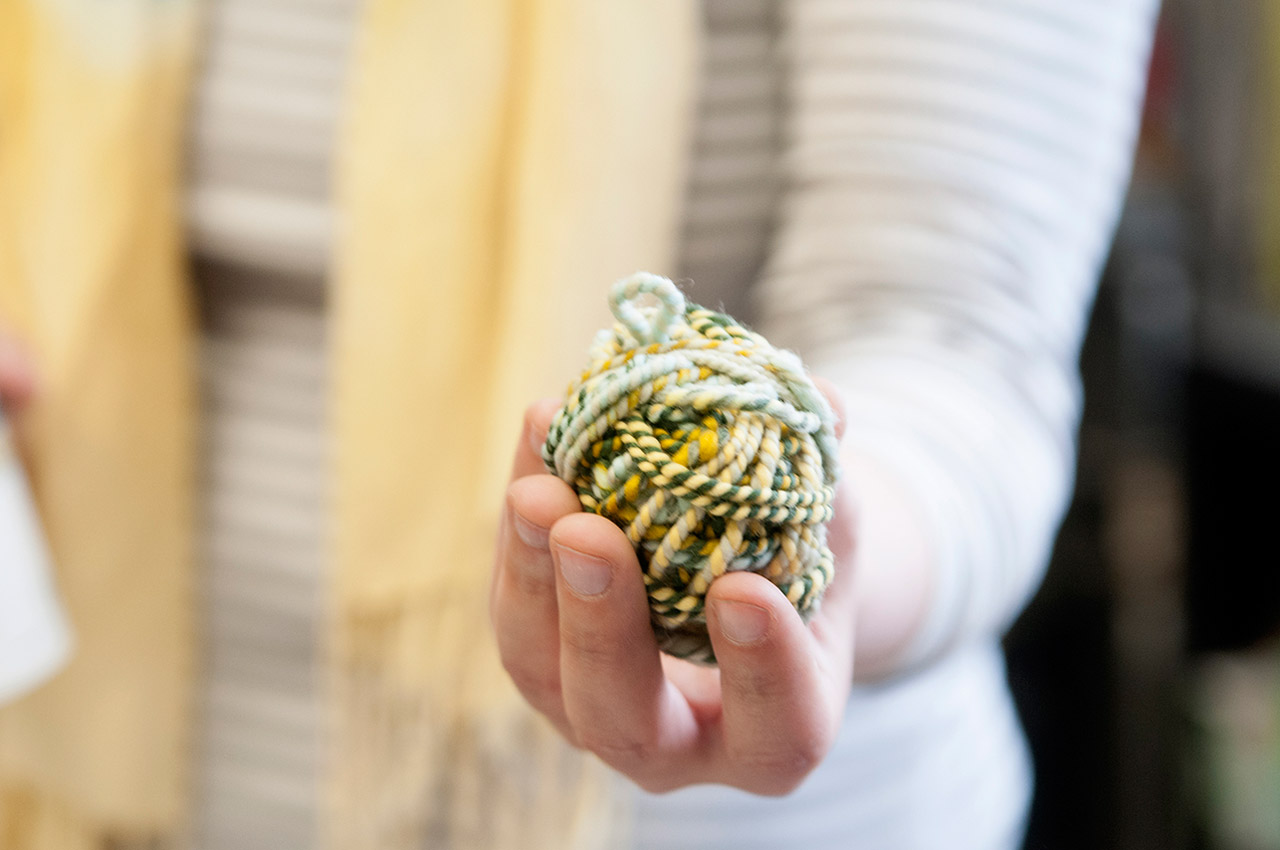 What do the hands, arms, and eyes symbolize within your pieces?
They are bad jokes. Because they are coming out of the walls, it is such a cheap trick and I really like those, from that ’70s culture of production values. Things look like they are coming out of the wall—they obviously are not coming out of the wall—but there is something about that particular trick that I think invites a really easy suspension of disbelief. It also comes from watching a lot of horror movies and having things come through the wall. And then this idea of having the textile be a covering for the body, so that when you hang it on the wall the wall becomes a body and the potential for a person to be hiding behind there is kind of terrifying. It’s warm and it’s comfortable, but it’s also a big broad thing covering up something else.

Does having your work on the wall subvert the invitation for the artwork to be a veil?
I kind of like thinking about it as this curtain or this rug over a portal, and then whatever is in there is silly and ridiculous but really earnest. A lot of the time the hands are offering things in this earnest way. I came about making them because I was working with these knit tubes a lot and when you handle them with your hands it’s best. You get to compress them, or let them flow through your fingers. Hands are a really perfect armature for them. And I was trying to get all sorts of hooks and dowels situations, but I realized I should just be making copies of my hands. I am really into long view. I like the way things time out in a piece, but I like to see the trajectory of somebody’s practice. I imagine, I started casting them when I was 30, and when I’m 60 my hands will look completely different. So there will be this body of work that always has my hands in it. People call what I make handwork so there are stupid puny jokes happening in my practice, and then there are also jokes about formal sculptural faux pas. Then there is this very sincere part of my work that just wants to get that perfect handling of the textiles. 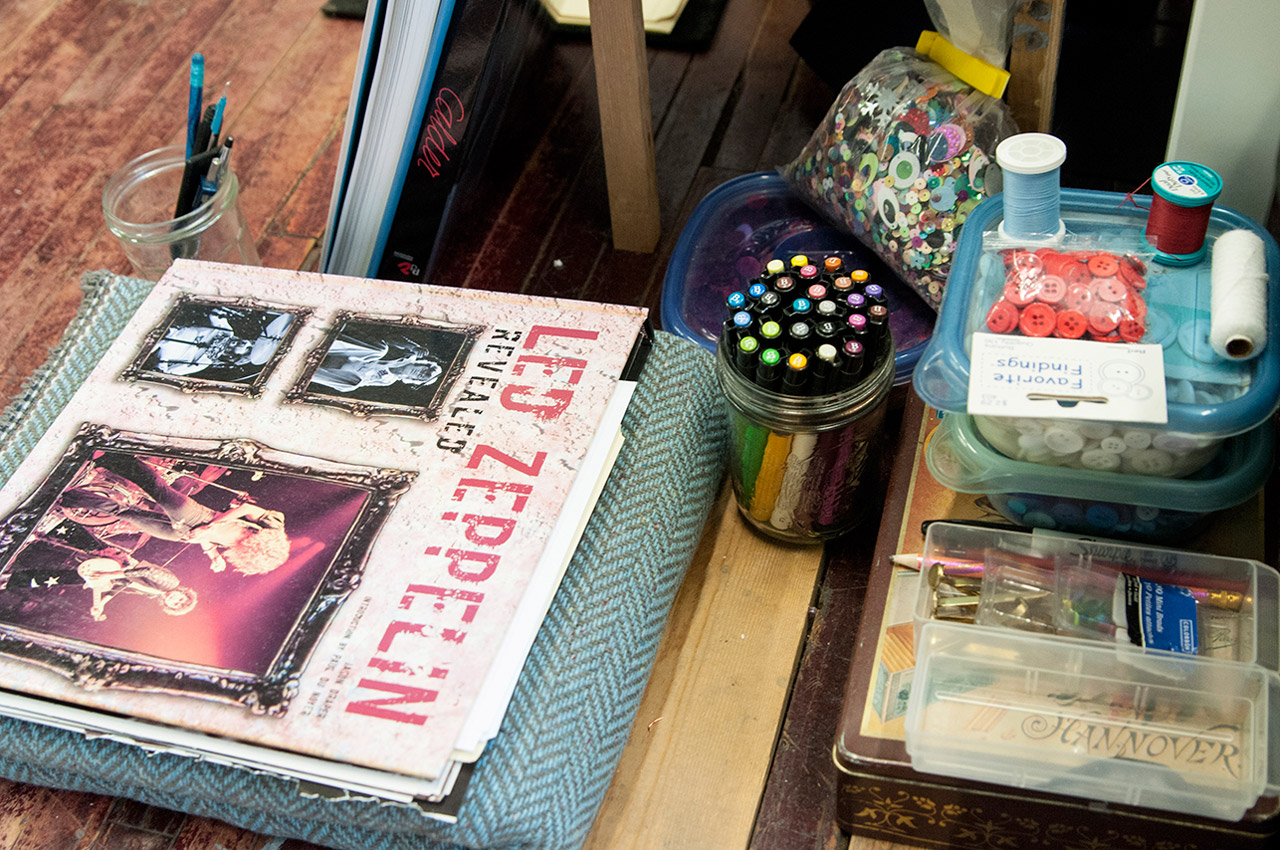 What is the process of creating the hands for your pieces?
There’s a bunch of small buckets, and these hold two hands each. The process is, depending on how many I cast, I find something to watch or listen to for awhile, then I mix up alginate and I have about ten minutes to get comfortable and it starts to turn into a rubber. Once it’s rubber, you can wiggle your hands out of it. When you are casting one hand or one arm, you are pretty fine. You can drink, do whatever you want, talk on the phone. But when you are casting two—you are really stuck. You never have to go to the bathroom until you’re stuck. You are never thirsty until you are stuck. No one ever knocks on the door until you are stuck. Each cast, once it’s filled with plaster and the hands are removed, you have to tear the cast apart. I never have the same gesture, it’s always different. Basically you pour plaster into the holes and then I usually sink screws in. I usually know what I’m going to do with them, whether I’m going to screw them into the wall or leave them on the floor.

People call what I make handwork so there are stupid puny jokes happening in my practice, and then there are also jokes about formal sculptural faux pas. Then there is this very sincere part of my work that just wants to get that perfect handling of the textiles. 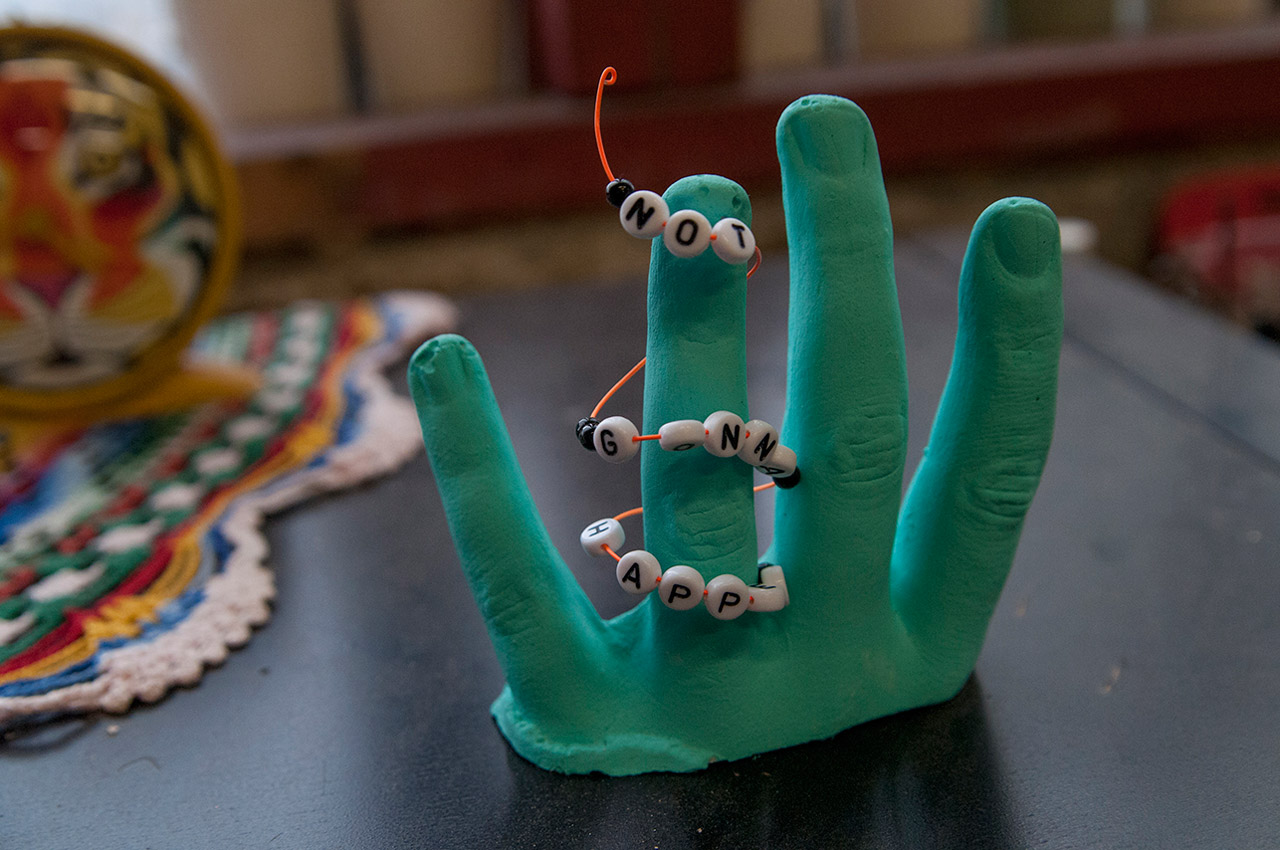 What is the reasoning behind your taut, pelt-like hanging of your pieces?
It goes back to the textile being a body. Being a curtain, or a stage, or a backdrop for something. There’s a lot of times that I am seeing textiles forced to do something that they wouldn’t do. I made the body and then I see what the weight is, and see what the pattern is once you stretch it. When you do polka dots and you stretch them, the stretched areas pull the yarn tight and the polka dots fade. So there are really great things that happen visually and formally when you just treat the fabric in ways that it responds naturally. So stretching is one of those things, suspending is another.

Do you consider your pieces to create performance without body?
Definitely. When I first got to grad school I wanted to do the opposite of what I was doing, I wanted to scale up. I had a studio for the first time that wasn’t just a sewing box. I was moving so much that I had this committed mobile studio. I am really into mobility. I think that is another one of my attractions to textiles. Once I got a studio, I started using cheap-ish materials—paper, cardboard. I always had people peeping in and I needed time, so I built a house out of cardboard in my studio that I would hide in. I spent so much time in it, that I started to feel a bit like a hermit and I really liked this hermit narrative. At that particular time I ended up taking on that role. I shaved my head and I started making the exterior world that I would be shielding myself from or interacting with. It felt really performative. When I was outside of my house I felt very exposed. It was suggested that maybe I should try performing a little bit, which is scary. I make jokes with objects but I don’t make jokes in front of people and perform. I tried it, but I was forced to try it.

I still feel like I am thinking about the same things I was thinking about when I was putting the performances together, I am just using coded objects—things that have inherent meaning. I am also working them into constructing an additional meaning and an additional narrative into each piece. 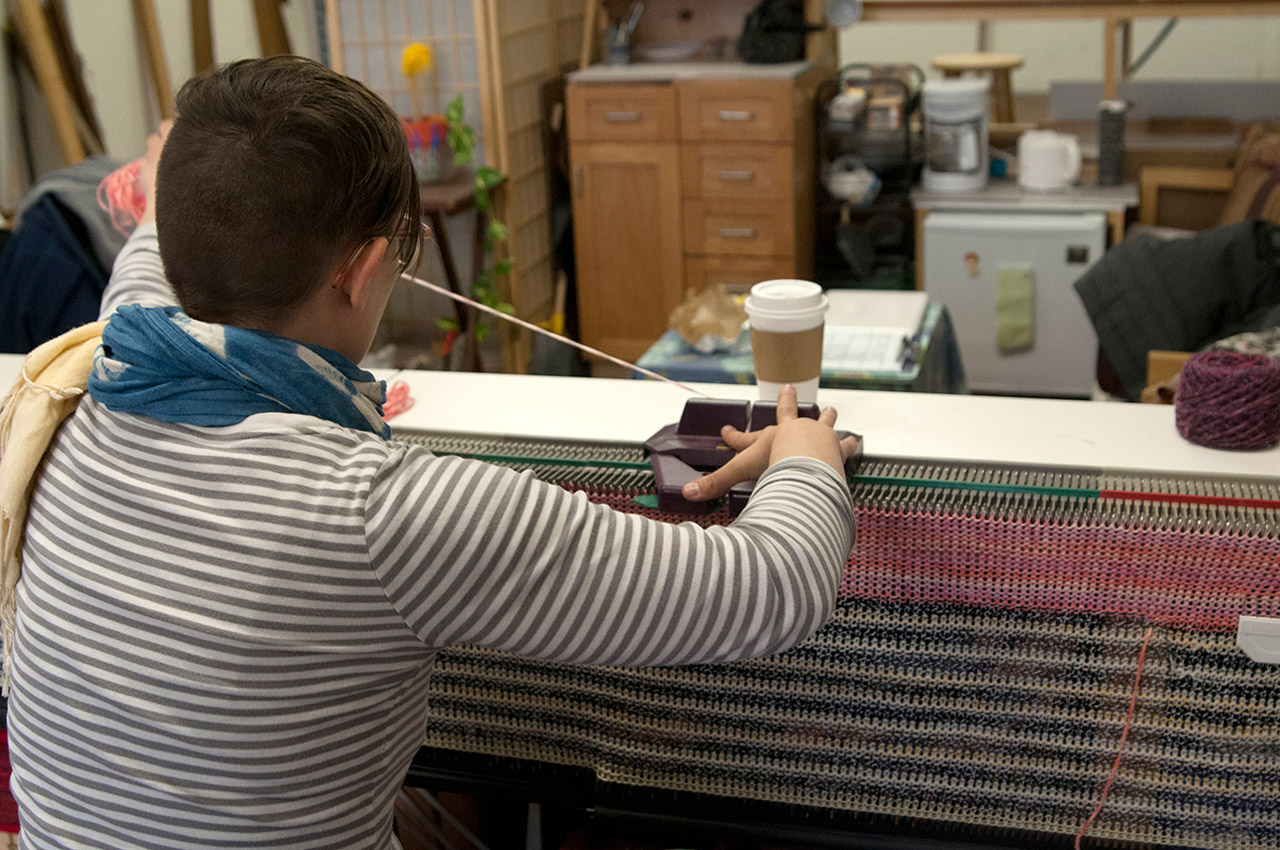 In what ways is craft considered faux pas?
When you have a contemporary art audience, it all pretty much is faux pas. So you can be really cheeky and kind of rude.

I like creating that attraction/repulsion. Like, ‘Oh that’s felt? Does she know??’ People that know me are like ‘Yeah, yeah that’s funny.’ But people that don’t are like, ‘You can’t do that. Why is she doing that?’ It’s just too fun. I can’t behave enough not to be engaged with those processes.

What has kept you in Chicago?
Chicago is great. It is the perfect place to make art. I became very aware that there are two very different craft worlds going on. I am sure there are many more than two. It is actually a very nuanced field. There are schisms between. It is not a very fluid discipline. In Chicago, it is perfect. There is a criticality to the discourse, just like there was in Philly. But there is cheap space just like there was in Portland. A lot of people talk about finding their intellectual home and I feel that way about Chicago more than any other place that I have lived.