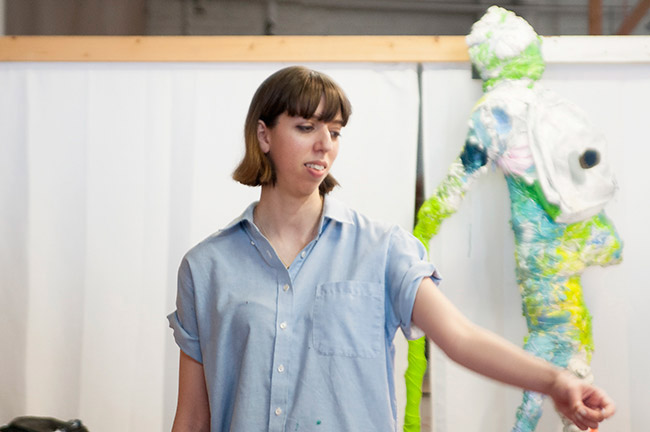 Kate’s studio is large and open, objects and paintings clinging to the walls and floor in an array of completion. Often requested to make larger sculptural objects for shows, Kate places her own items inside, giving personal objects a newly enshrined existence.

I\W: How do the exercise ball paintings you have been working on fit into your practice?
KR: I will be working on a sculpture or a painting and then come back to one of the bouncy balls in-between. I like to have weird experiments going while I’m working on other things. At a recent show I had one of the balls just rolling around the gallery. I thought people would pick it up and play with it, but people were really respectful of the object. The bouncy balls work well with their existing circular forms, which I also appreciate with these basket pieces I have been working on. I started doing these last fall when I was at a residency at Ox-Bow. We would go to all of these thrift stores in the middle of nowhere, and I would find baskets for $.99. I started collecting those and doing these weird paintings on them and incorporating fabric. I collect a lot of scraps of fabric and people also donate a lot to me. I had a pretty big collection before a studio fire in 2012 where I lost a lot of my collection and work.

How did the studio fire influence your practice?
It was crazy because I had to completely start all over, which affected my practice big time. Currently I am working on a remake of something that I made before the fire, when the piece was lost. It isn’t necessarily painful working on it, just kind of weird because I have had to put it behind me. I have to go back to work on this piece with a completely different frame of mind than I was in back then, but it is also fun. I have never remade anything. So far it’s better than the first one. 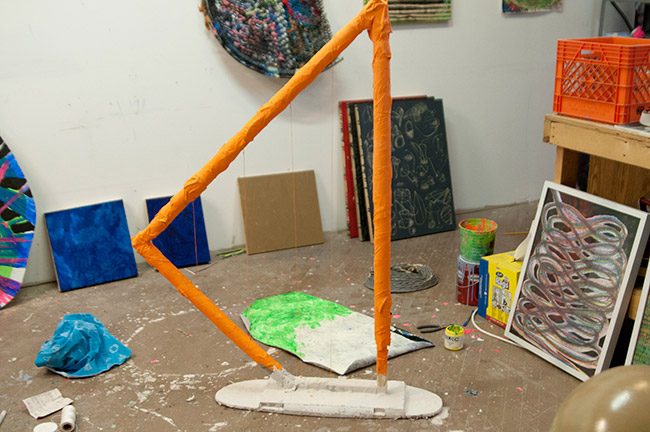 Was there a theme that appeared in your work after the fire?
I have shifted from thinking about objects, to making sculptures that became more about life or something like that. My practice has started to focus more on drawing and more on actual paintings. When I lost the studio all I could do was draw for awhile at home, so I started focusing heavily on drawings. I was always making paintings, but whenever people would ask me to do a show, they would ask for a sculpture. Before I was doing making more objects—like giant tennis rackets. I was creating more physical objects. The walking man sculpture “Hero” was the first sculpture I made after that. It got more figurative and more abstract. 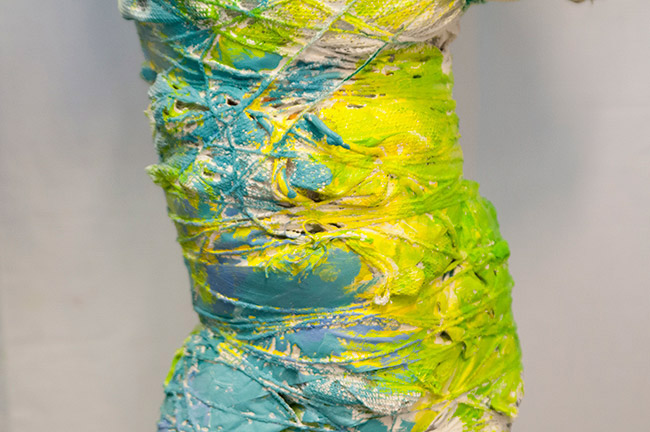 How do you incorporate your personal objects within your sculptures to preserve them?
“Hero” has a backpack of mine that I actually kind of miss now. Even when I was young I was interested in found objects and material and journaling—a way of preserving things of mine. It is cool to incorporate objects into the sculptures because it is a suction for all of the stuff I don’t necessarily want to get rid of. The items can be transformed into something else. A lot of fabric also goes into the sculptures, items from when I will go thrifting and get all of these amazing things, but realize they are totally ill-fitting. I have a real fascination with fabric and material and I love getting to paint that and see a texture or cool print show through.

What do the tight strings of your sculptural objects represent?
They are really playful, but also dark and grungy, and I like that about them. They have a sort of aggression too. There is something meditative about binding the sculptures. It is like a maypole—I just continuously walk around them while wrapping them. They feel more performative. It is more interesting to build up a form that way—it lets surprises happen. 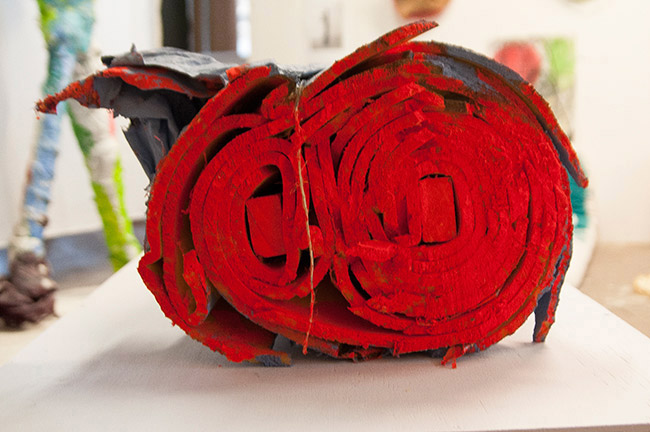 Explain your piece, “They Have To Cut Out Part Of My Heart And Rebuilt It With New Valves And Shit?”
The title is from this tweet that Fred Cole of Dead Moon had tweeted because he had to go in for emergency open heart surgery. That was his public statement about it. Originally this piece was upright and was a lover’s sculpture with two figures. I made the sculpture at Ox-Bow, and because it was the heaviest sculpture I have ever made, it was starting to lean and I needed to fix it. Hearing about him needing to do this serious surgery, it was like I had to do this surgery on the sculpture too. It ended up being a surgical table in a way that I carved into. I have been doing carvings for awhile on wooden panels, so it was kind of cool to do a carving mixed into a sculpture.

How do you usually create the carve paintings?
Pretty much I just prep a surface and I use a Dremel. It is really fun to make these because it is like doodling. I could do it all day. It is also bizarre to sweep a painting. I really like painting on wood, I don’t do canvas much anymore. Wood is a much more comforting material for me as opposed to canvas. Canvas is too much pressure and history. With wood it feels more like labor. With canvas I get stressed out. 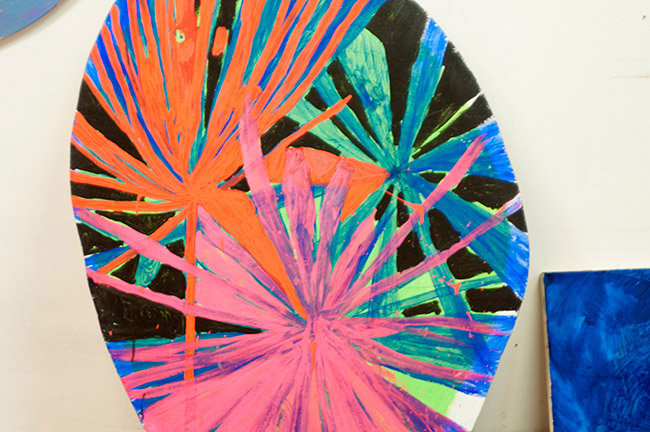 Do you go though color palettes in cycles?
I will be doing this really fluorescent, bright stuff and then I will ask myself if it is becoming a crutch, and then I have to do a lot of really dark stuff. A good way to sum up how I work is a little bit of everything and trying to be democratic about painting, sculpture, lights, darks, figurative, abstraction. I prep a bunch of surfaces and then work on those and then work on a sculpture. 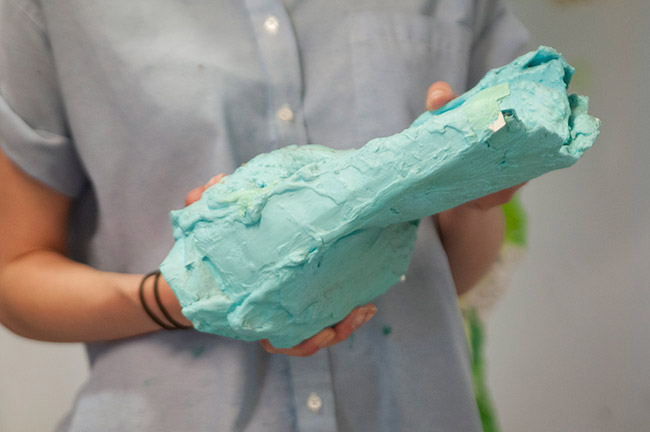 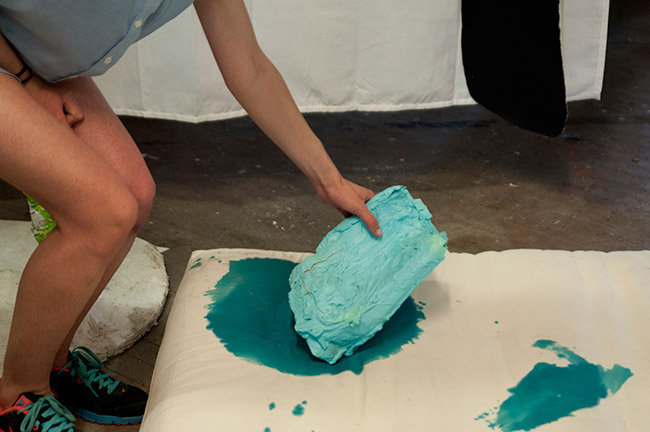 Can you explain your futon piece?
This was a funny one, it’s called Garden Scene. I found this futon mattress in the alley by my house, and it was weirdly clean and wrapped up. It was fun to use it as this painting surface, and then I decided that something else needed to happen. I had a few drawings and added them to the piece. It was fun as an installation, incorporating a bunch of objects in one thing instead of trying to just make the mattress work. This object on the corner is one of the few things that wasn’t destroyed in the fire. It is a cereal box that I was filing with plaster, and it started to get saggy and I think it originally was going to be this perfect mold of a cereal box, and then it became way more interesting. It was kind of cool that it was one of the few things that was preserved. I like reusing things too. I am not afraid to move things around or incorporate new things into old work.

Can you explain the process of your thickly-painted sculptures?
I love goopy and messy—that’s what I love about painting in general. After the fire I didn’t have paint anymore, and I was drawing a lot. I started to really miss painting. José Lerma taught me this trick where you can mix acrylic paint and tiling caulk together and it creates an almost frosting. You can use that to get more goopiness. I also have this expandable foam stuff that you can mix with oil paint for texture too.