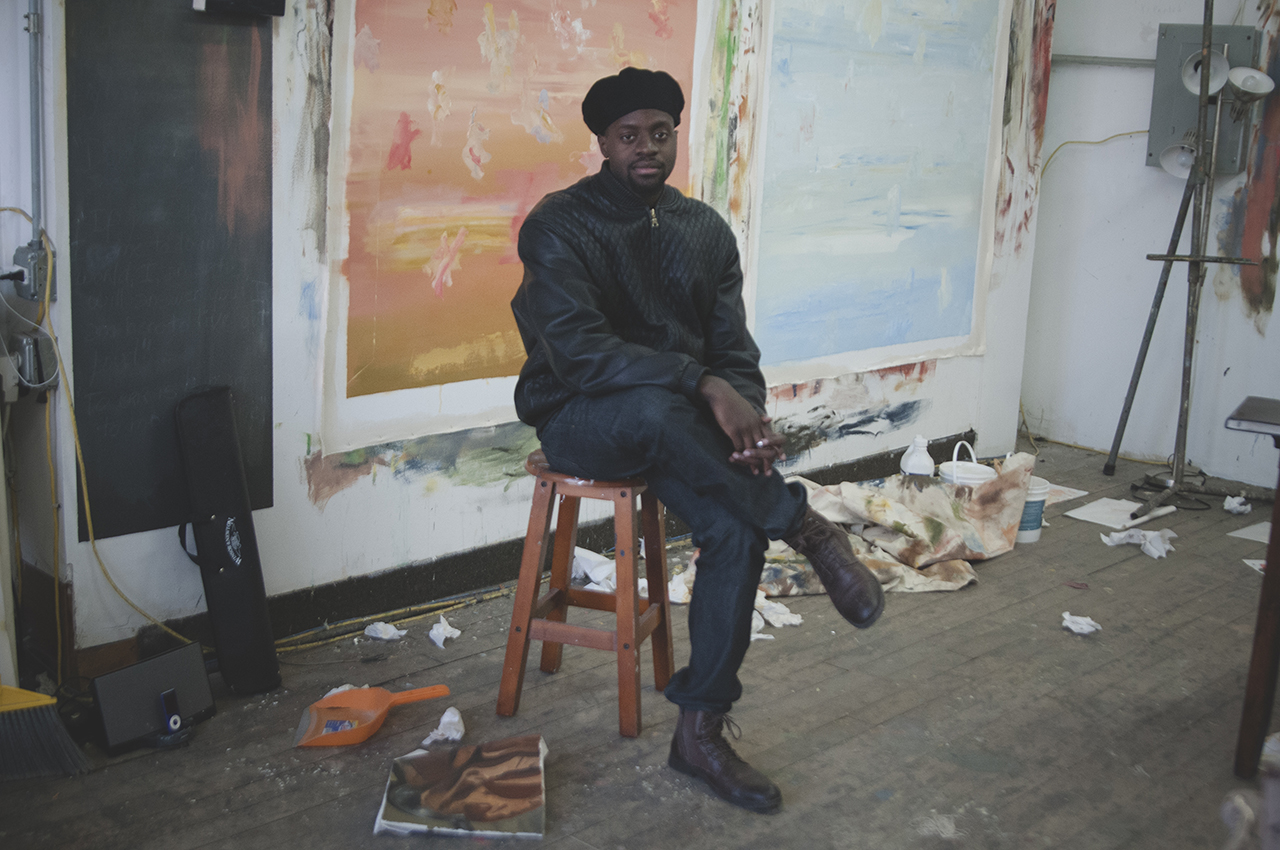 Consciously leaving the details of himself and present worries at the door, Kenrick uses his studio as a way to play with the inner matter of his subconscious, folding deep memories and scattered inspiration into his work. Simply applying materials to canvas without plan, Kenrick chooses to analyze images only after their creation, often circumventing intention and relying completely on a meditative flow.

I\W: Can you talk about the pictorial language you have developed in your paintings?
KM: When I am painting it is like meditation, so in that sense I channel a lot of ideas, thoughts, and excitements that might be subliminal. For example, in my latest painting there are a lot of references to classical painting, but then there is also this animated or cartoonish language that evolves. I think my contemporaries are starting to see that a lot, that is how we grew up. That illustrated pictorial language is embedded in our visual language as artists. Animation tends to represent what is happening to us internally in an interesting way. When a character blows up or screams out and you see vibrations coming out of his mouth, there are certain things within that language that can really communicate emotions that perhaps words couldn’t do. The same potential is in classical painting. It is able to communicate certain things that are very profound and mysterious. Putting those two languages together wasn’t a conscious decision. I was just in the moment and following my excitement. 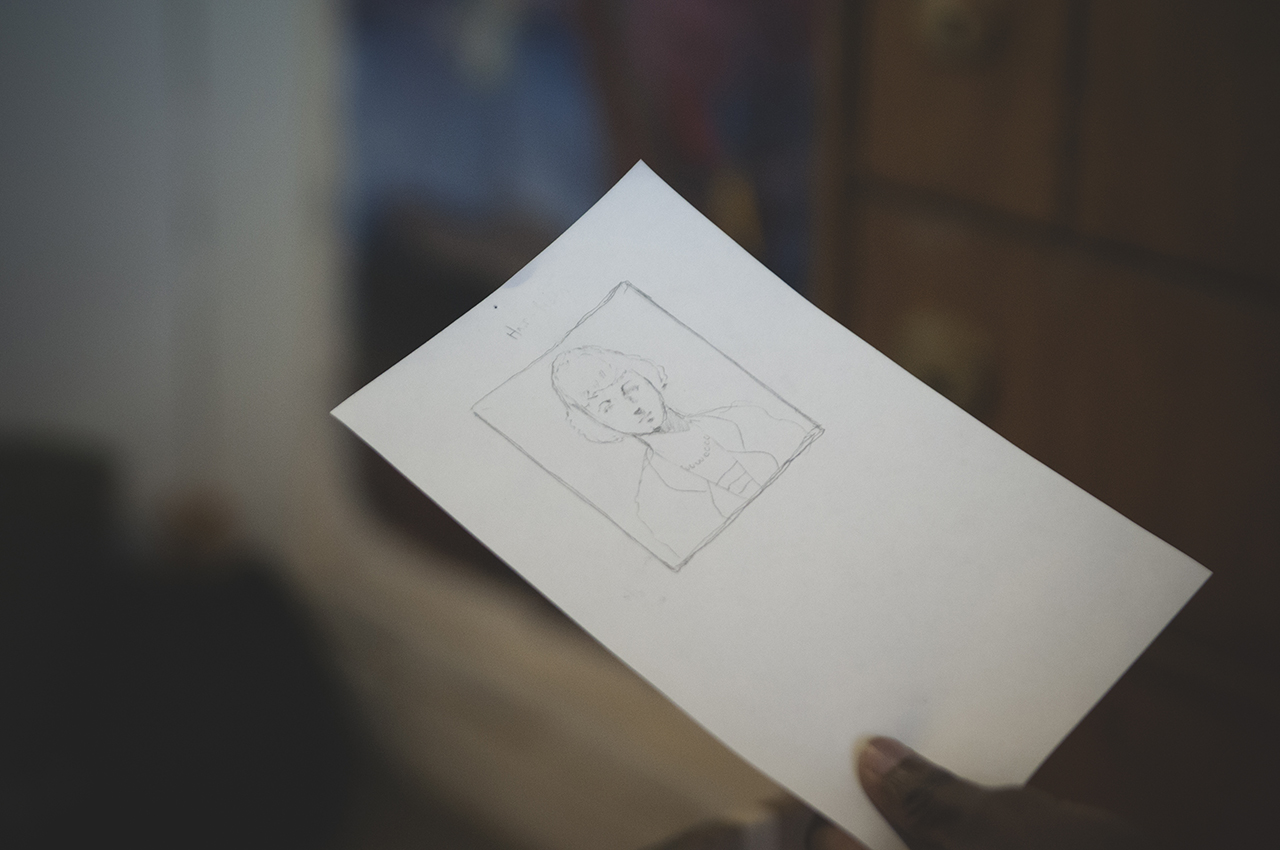 Who is one inspiration for your practice that is not necessarily a visual artist?
Lately I have thought a lot about Larry Clark and his work. When I first watched “Kids” I was blown away. The themes from that film seemed to relate to the concepts that were coming out of my paintings at the time. I watched more of his work and realized his films essentially are all about freedom, which is exciting. Clark’s films are usually about teenagers who live life by totally disregarding laws, rules, expectations, and consequences. I believe that if I want to find truth and beauty, I must also exist the same way within the studio. I have to file everything away about myself including boundaries, worries, age, race, etc. and just allow myself to do what is fun. In my life at the time my peers were going off and making life altering decisions and I started to wonder what were governing those decisions. What kind of laws were they following and what kind of laws do they hold themselves to? What fascinates me are individuals who are courageous enough to live their lives free. 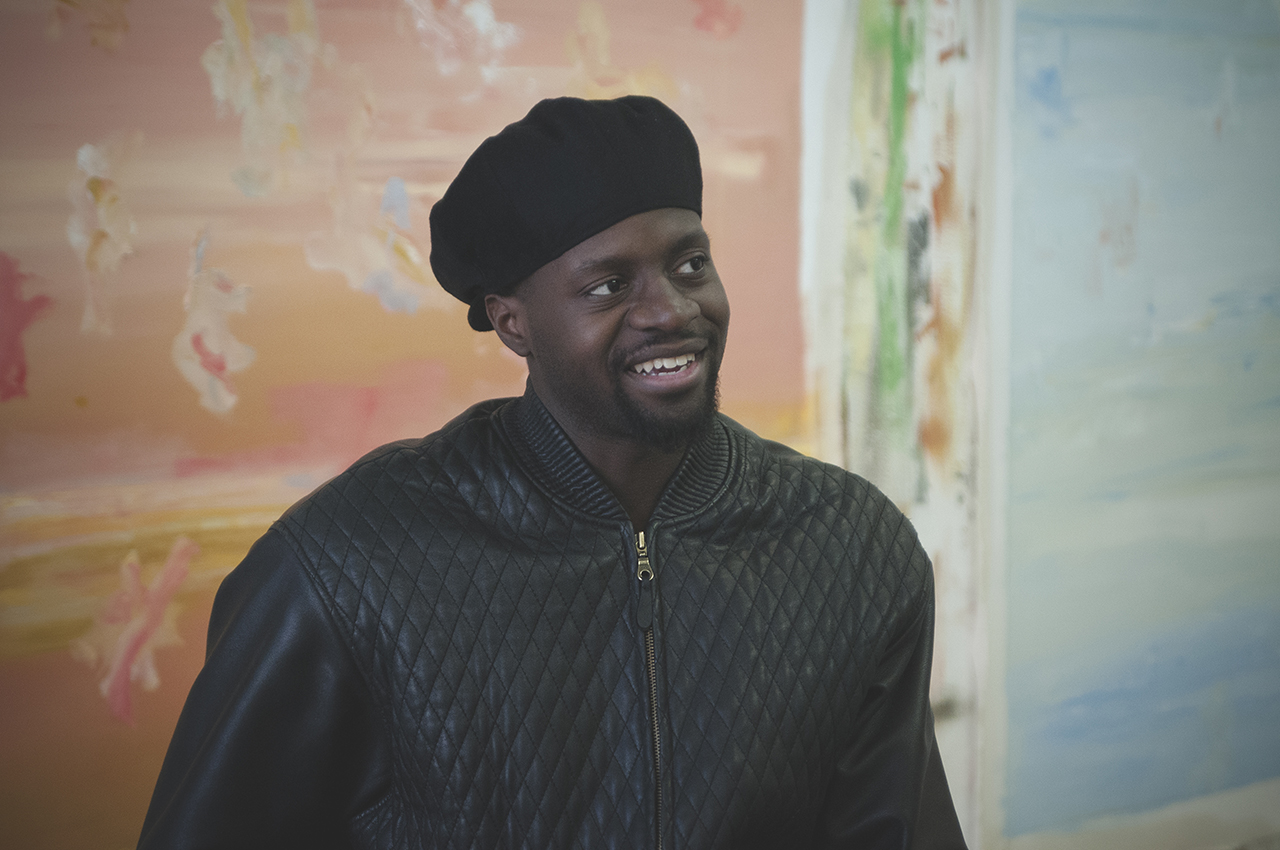 Do you aim to put aesthetics before politics or content within your paintings?
I believe that form and content are inseparable. What brings me into the studio is a desire to explore something that is exciting to me in the present moment. It could be as simple as seeing a shadow fleet outside, or a girl twirling her hair on the bus. Whatever it is I need a gesture that brings me towards the work, and while I am working I am not concerned about thinking logically or analytically because that holds me back from the process. I like to produce the painting, and then think about it later. Once I am finished I can talk about it. While I am making it I can’t give an explanation, it is a journey. If I know how the image is going to come out, I don’t see the point of producing it. I need to surprise myself.

Can you speak towards your physical process and how it tends to involve a high degree of spontaneity?
My most recent work is a formal response to my previous painting, which consisted of a specific arrangement of figures in space. Painting in that way is like being a film or theatre director. You have to keep in mind a lot of details. These newer pieces are a desire to just place things on the canvas and see what feels right. I had a different plan for these paintings, but as I was making them I was so happy to put paint down on canvas without pursuing specific form or space. I think that I was telling myself to not think about presentation and just migrate beyond constructs. 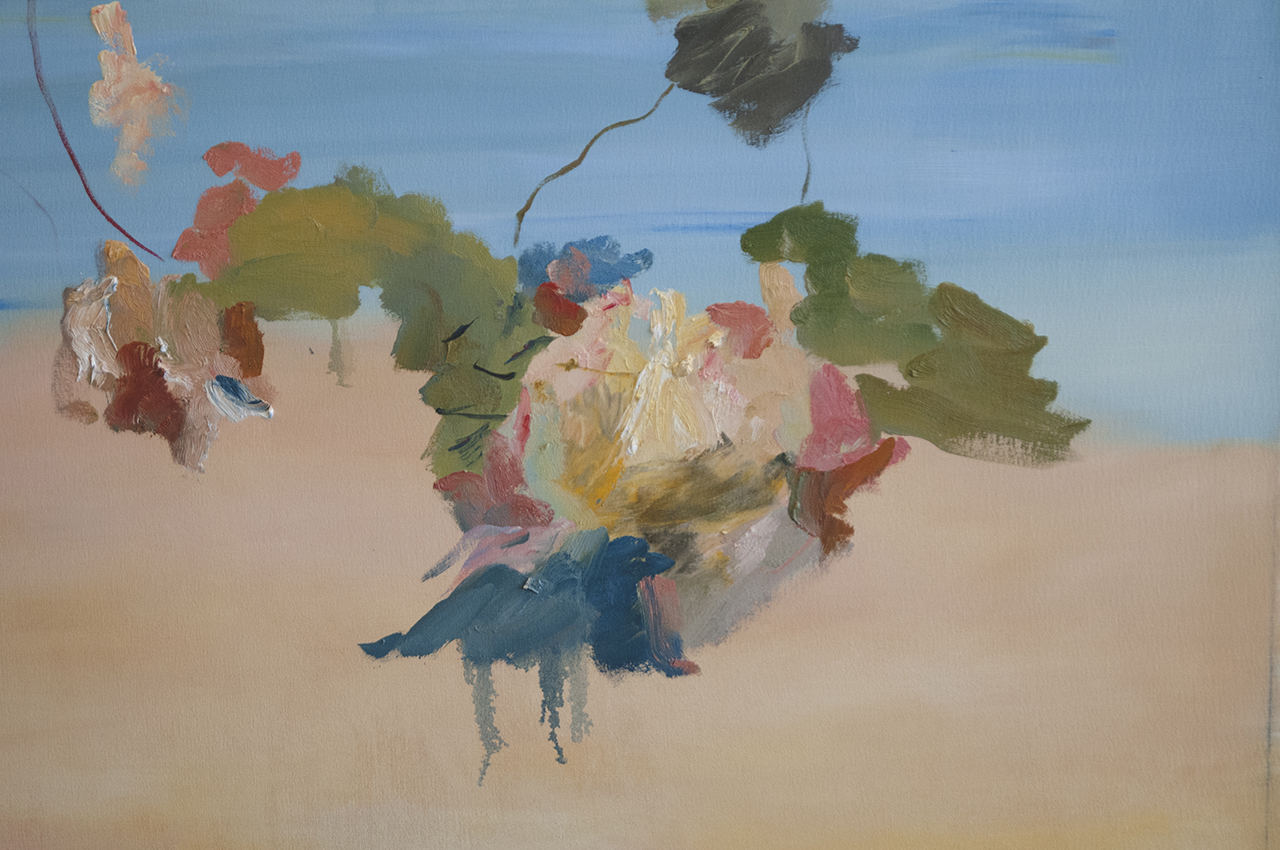 In a lot of your previous works you have very realistic faces combined with faces that are completely blurred. Can you speak to why you choose to blur these faces out?
I just thought it looked cool. I am a pretty simple guy. I don’t think I am satisfied when it is one or the other. There is a certain feeling you get when you know a work is missing a certain ingredient. I think during that time having that play with nonrepresentational marks in a very constructed, realistic image, that was cool to me at the time and was exciting. Trying to figure out a way to make them different, but also have them work together. 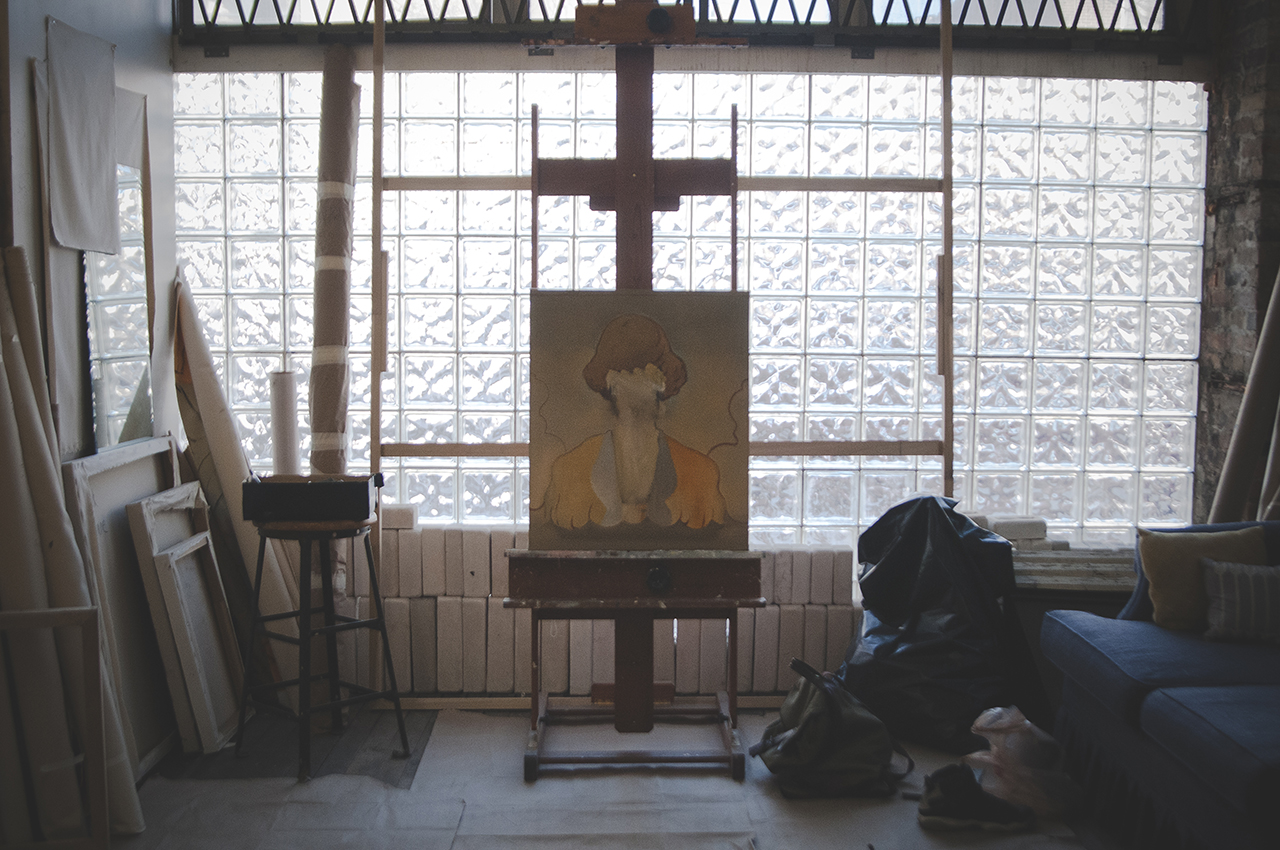 Some of your earlier work had a very post-apocalyptic quality. Was that a way to introduce a cinematic feel to your work?
That whole imagery was the byproduct of the journey. It wasn’t premeditated. There was something that resonated with me when that imagery began appearing in my work, therefore I kept incorporating and developing it. There was something about that imagery that deeply affected me. 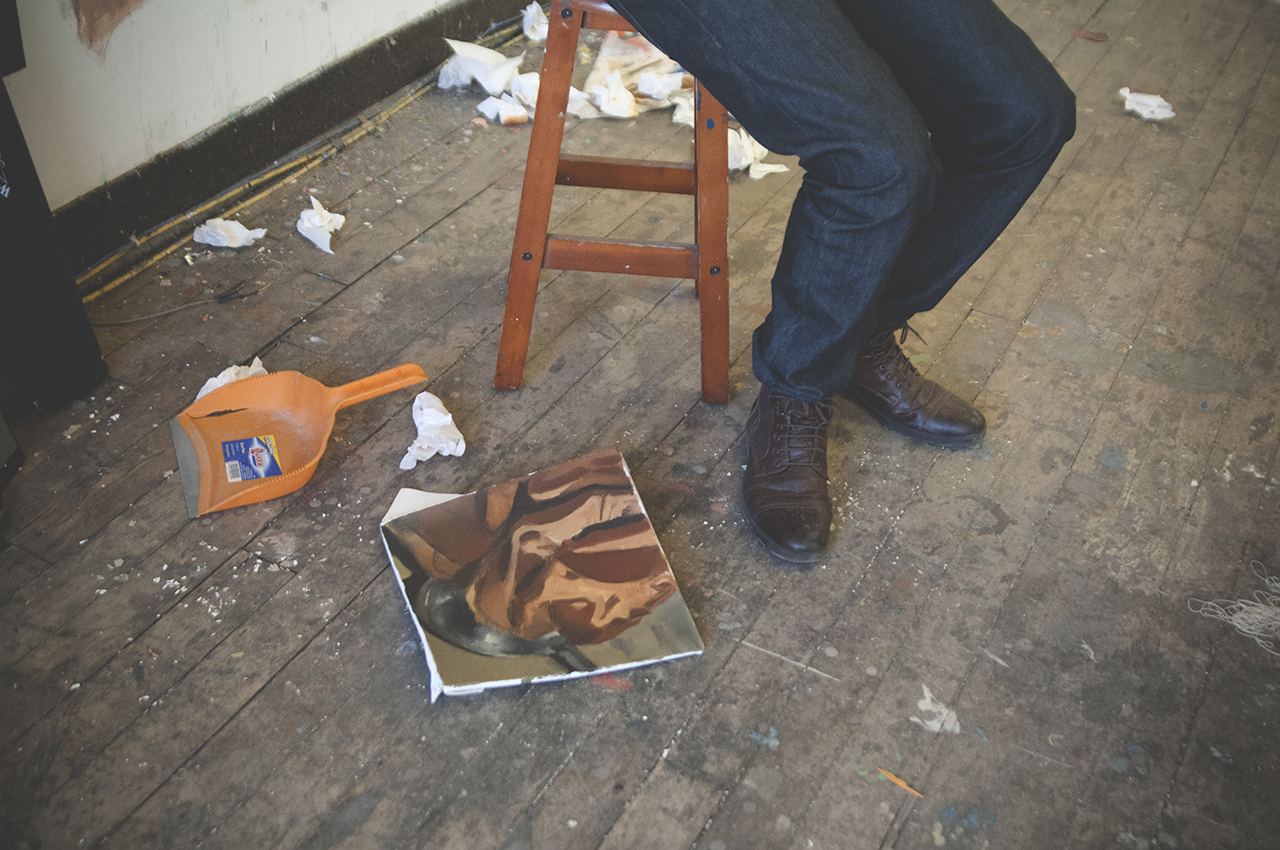 Do you ever use your own history in your work?
I would say so. In each work I create I can never separate myself from it. There are always things coming into the painting. I have often incorporated a varsity jacket into my paintings. The jacket I think, is an unconscious response to my older brother. When I was young he always wore a Yankees varsity jacket and I thought it was the coolest. When I was in fifth grade I had the chance to buy a jacket of my own. I couldn’t find the Yankees jacket but found and bought a Michigan jacket instead. Those kind of experiences go right into the work. 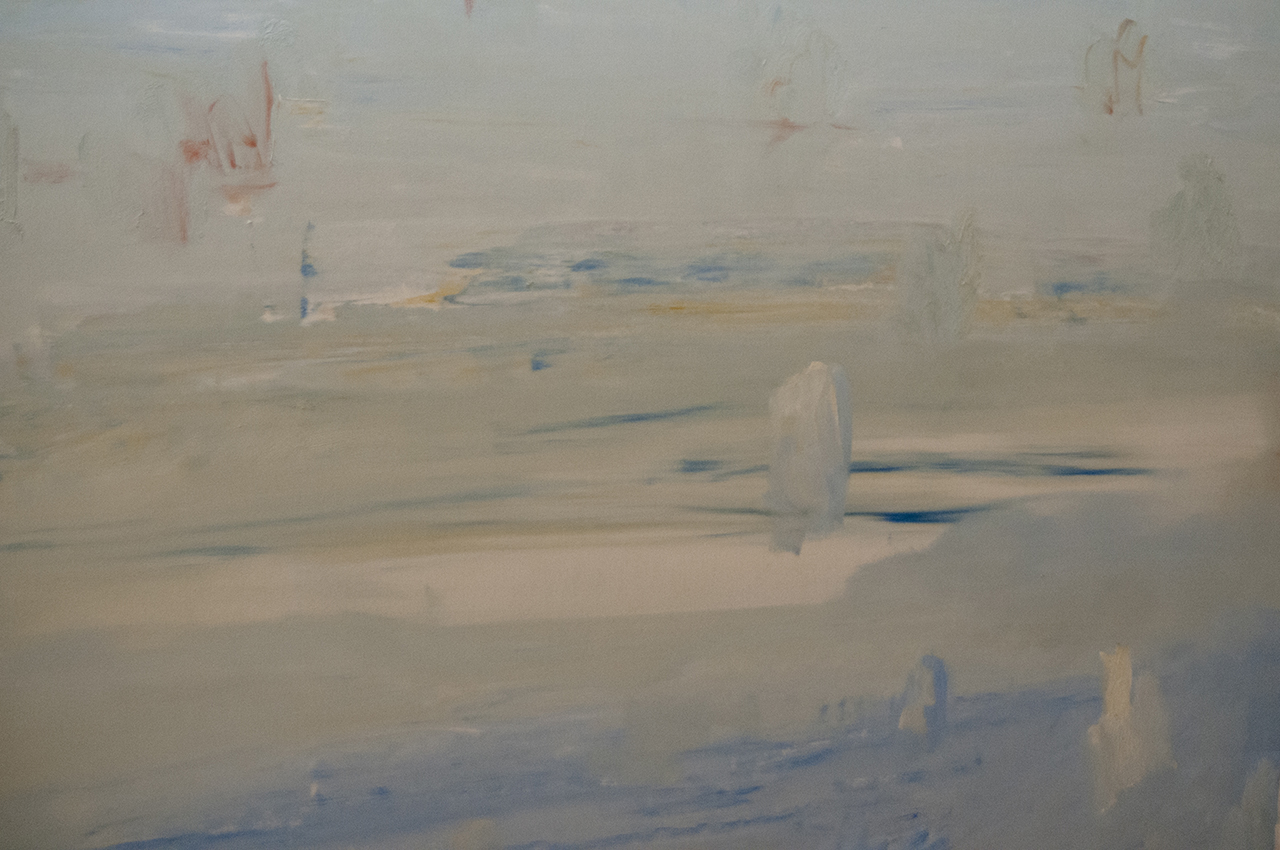