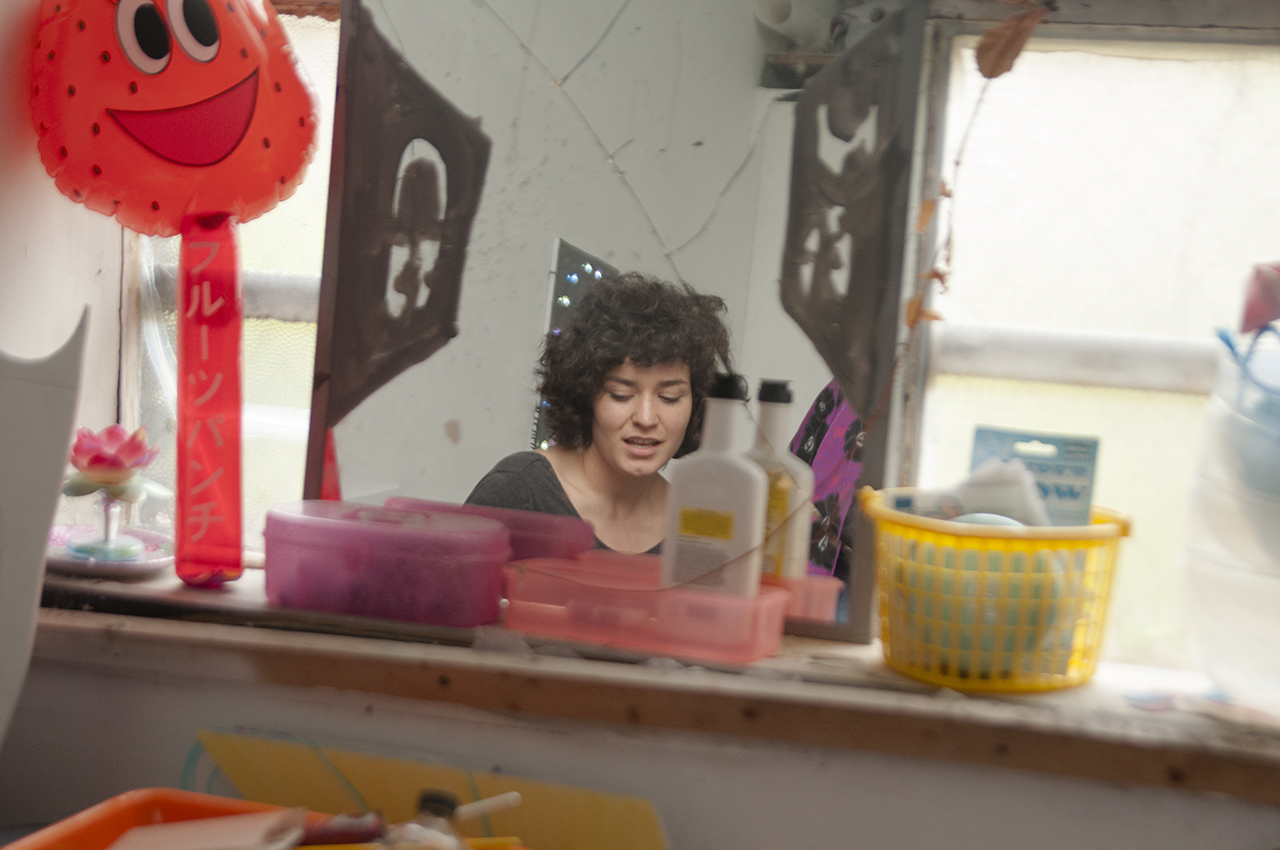 Smattered with objects Maddie has stolen from various chain retail locations, her studio exists as a gathering place for her girly aesthetic. Gold flowers and doodled hearts cover her foamcore pieces, works not focused on precise production but rather how that lack of perfection is perceived. Often incorporating correspondence into projects, Maddie explores others’ value systems— whether institutional or tied to one’s obsession with frivolous accessories.

I\W: Can you explain the concept behind the emails you wrote to institutions with a sexually ambiguous name for your show Jamaica Sweethearts at Julius Caesar?
MR: I guess the idea came from a part of my job at Contemporary Art Daily which is managing these online databases of venues. I am looking at institutional websites pretty often and updating their listings on our site with whatever shows and artists they represent. I was already compiling and looking at this information, and I thought that I could start to take out little bits of it for my own research. I have been interested in the fact that more women get their MFAs, but there are less of them booking institutional shows. What is the reason for this? I started compiling this material and it is important to say that it is not something that pisses me off. It is a conversation about the value of artwork and the value of the artist that I think is really interesting. How do these spaces account for these issues is really important to me. The answer that was the most complete, because a lot of institutions just ignored me, was from a place called the Power Station in Dallas. They are a nonprofit organization, so they have another level of responsibility to account for these kinds of issues. The response explained that they were at the whim of the artists and that being located in Texas makes booking more complicated. They put out requests and it just sort of just happens that more males are booked. 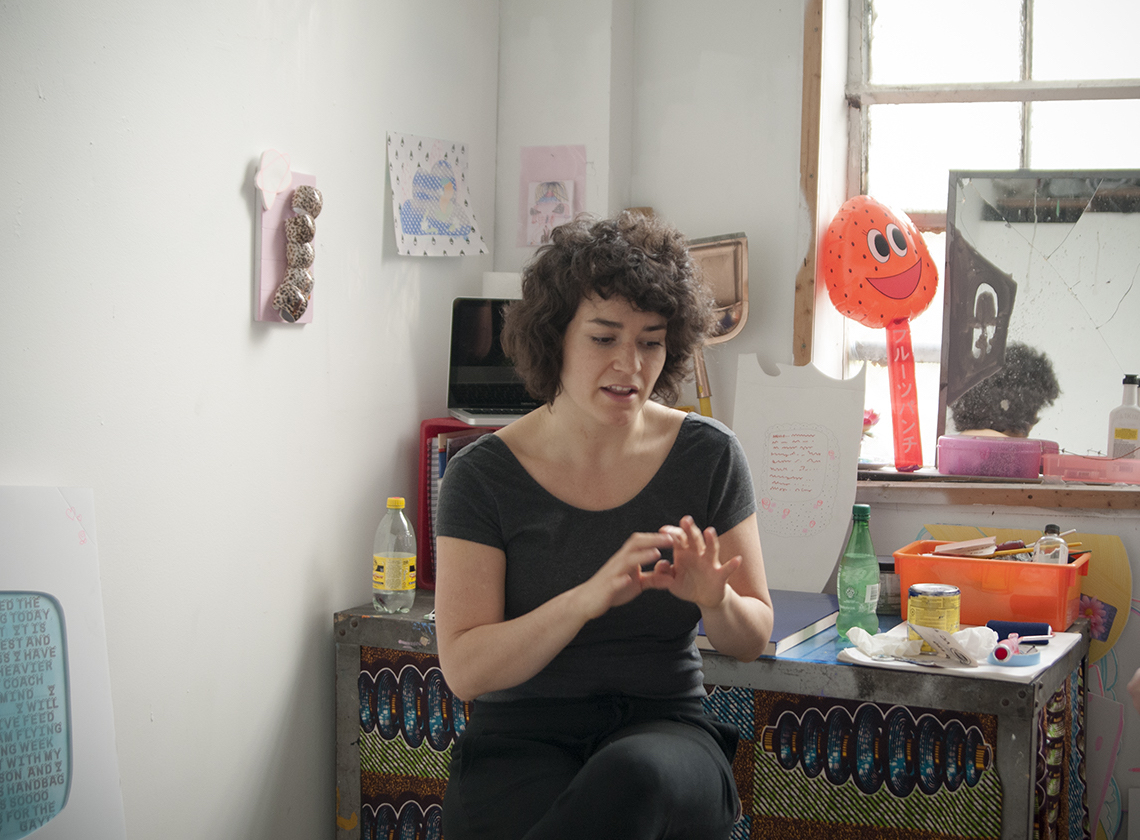 Was your intention to be satirical with your email requests and questions?
I think I tried to make it diplomatic. I didn’t want people to feel as if I was trying to pull something over on them, or that I was legitimately angry. I would almost say I had a very realistic tone. Casey Goodman is the name I used for this project, specifically because it’s a gender ambiguous name. I state they are an artist who is going to be running a space in Chicago and sees the fact that Casey Goodman will be showing more men than women as an inevitability. That was delivered very matter-of-factly. My questions were wondering if this fact was something that this institution had been criticized for, and do they think I will be criticized for them as well. There has been a range of engagement for the emails I have sent. The responses are usually that it just happens this way and we are not trying to do it intentionally. I believe it, I don’t think anyone is intentionally doing that, but I don’t know how to correct it, or what the answer is. 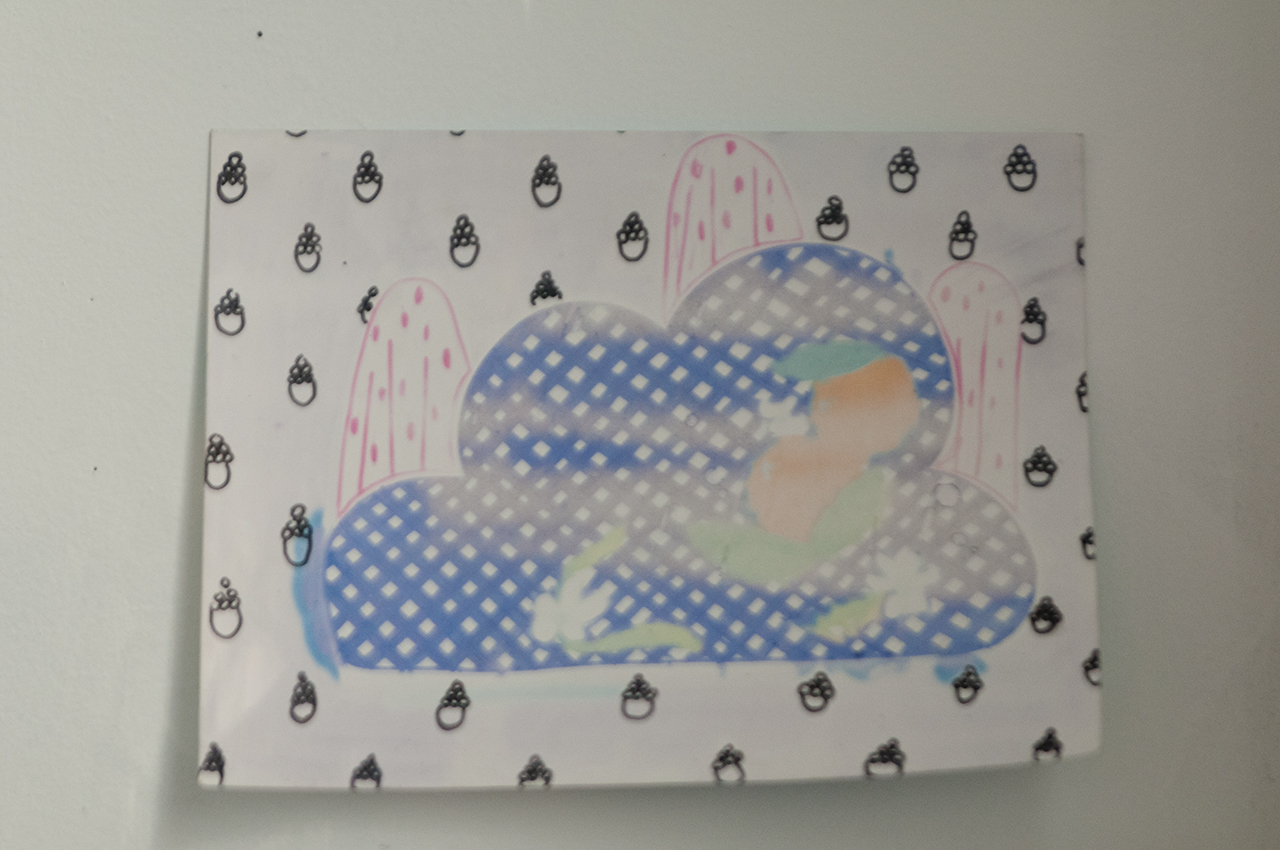 How did those emails interact with the visual work that you had displayed at Julius Caesar?
These conversations of how people negotiate power and value in artwork is really important to me. It’s a natural extension of the work I was showing at Julius Caesar. That show had a collection of paintings and posters and it is a really obvious value system. An oil painting would be worth more than a poster, but I try really intentionally to put the more important, personal parts of my practice into the poster as opposed to the painting. The oil paintings were purely embellished. There was no subject matter, they were just about embellishment as subject. They had flowers and hearts. That was a basic idea behind the objects in the space, and then I also cut the gallery in half with these foam core sheets and blocked off the light from above. I am interested in how important legible documentation is now, and that fake ceiling made it impossible to take good pictures of my work. The pictures are clear, but they are not this fetishized super white image. The signifiers for importance being placed on legible documentation and something that looks cared for, those are things that I am naturally not good at—so I embrace them. I don’t like taking good pictures. I don’t like having to take care of the materials I buy, and at a certain point in school I was criticized for this a lot. I was really shocked by this because I thought that I really did care. If I can wield that feeling of how it affects people, then that is totally what I want to do. 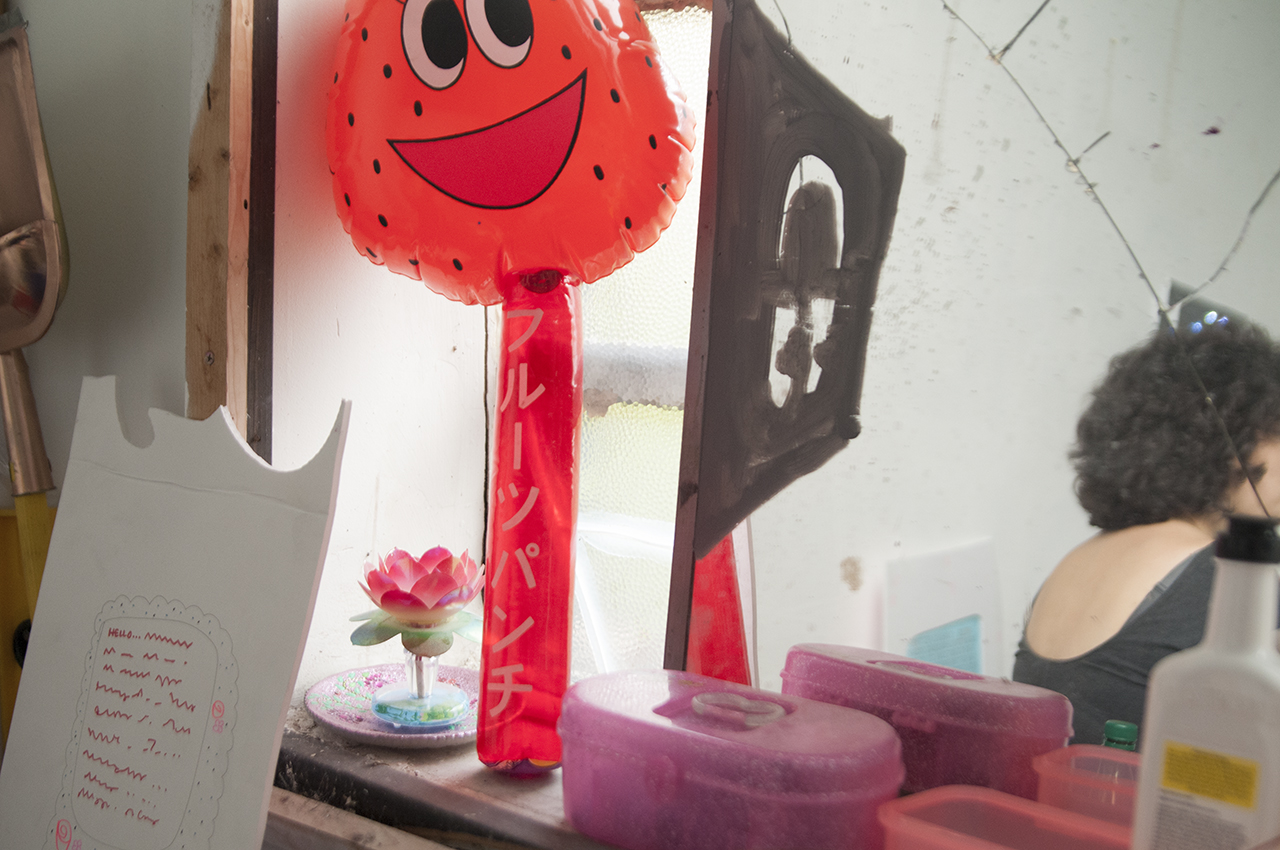 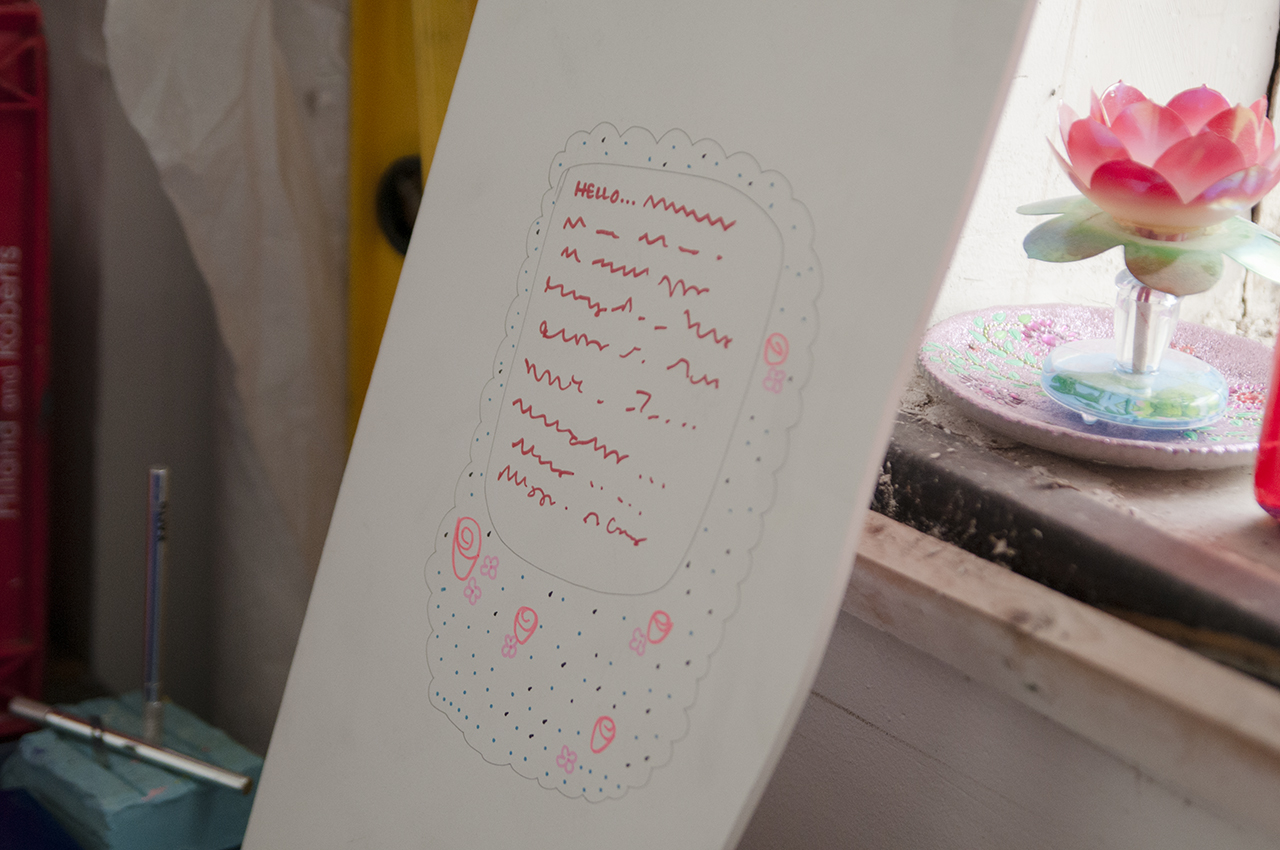 What materials are you drawn to if your interest is not necessarily keeping them in perfect condition?
Foamcore is something I have been really obsessed with for a long time. Another one of the rules I made for myself while I was in school is that I didn’t want to learn how to use a new machine or not be able to carry something I’ve made, so this foamcore let’s me do that. I can make it easily and carry it with me. It is also really sensitive. Part of the reason that some of my foamcore is all bent up is because I bought some and it didn’t fit in my car and I was really frustrated, so I just shoved it in. I have been on this tip lately where I just want to reuse all the foamcore I have bought over the years. I like that part of it. It has this history. That might not be completely obvious to the viewer, but I try to put these little things back on the foamcore to make it known that it is cared for—little glittery hearts and roses. 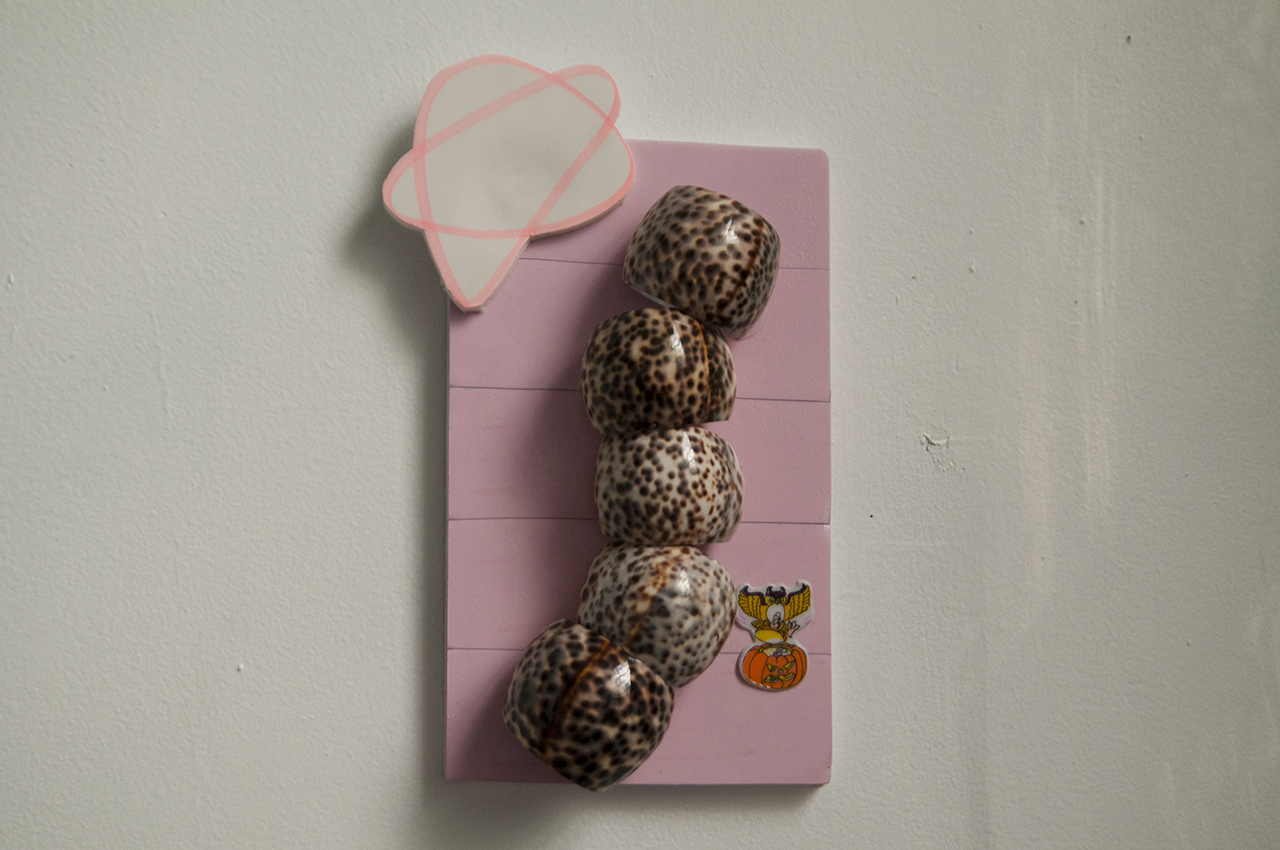 What is your draw to an ultra-girly aesthetic?
This stereotypical, girly aesthetic is something that naturally people don’t take as seriously, and so if I can embrace being naive and perform that to a certain extent, I think that is a really radical thing to do. This imagery of flowers and Disney characters are the things that were fed to me when I was a child, so I also genuinely think they are beautiful. It is a part of what I want to look at naturally. The work that I am making now is probably closest to the things that I was doodling in high school. 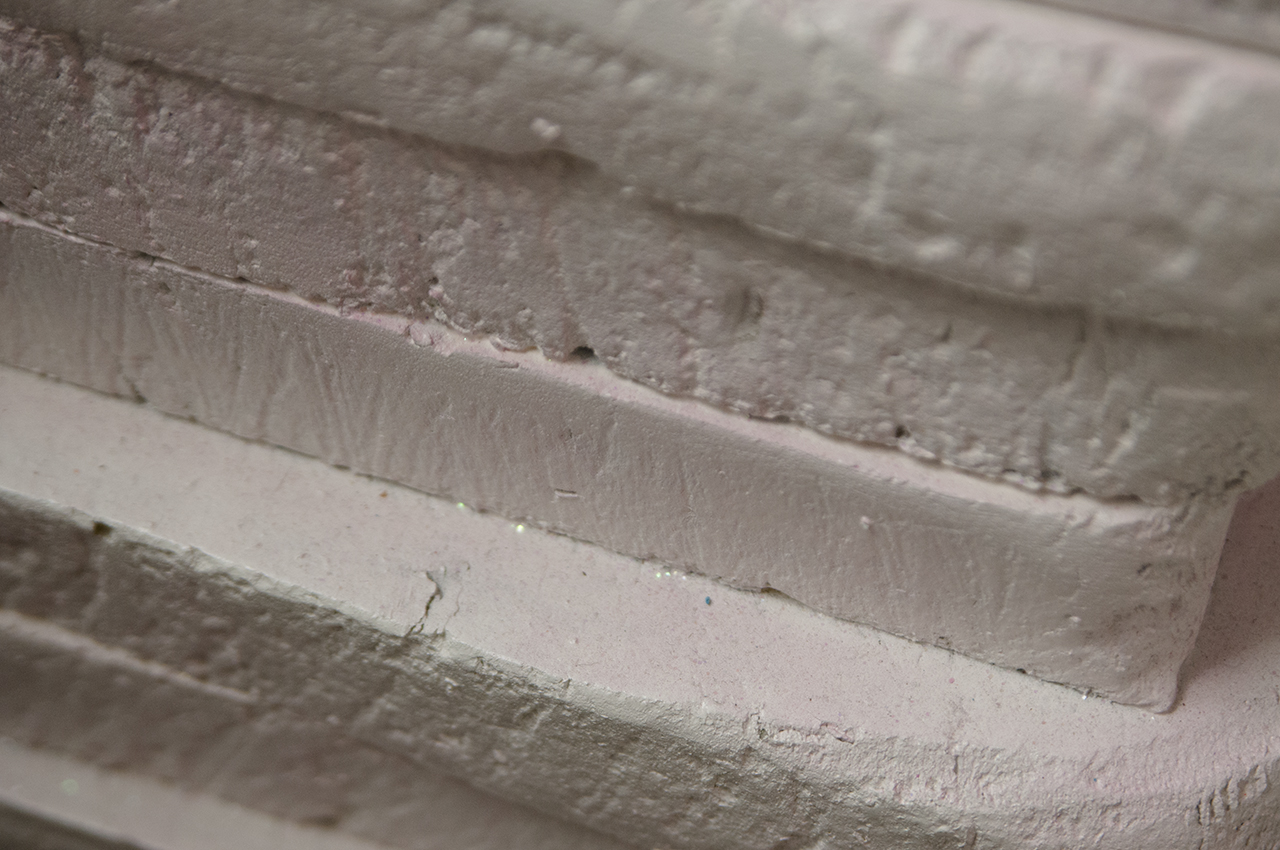 How is your latest project incorporating this aesthetic?
I have two pieces or displays that are holding objects that I have shoplifted. I am shoplifting from Forever21 and Claire’s exclusively. I think of these two places as hotbeds for young women building their identity, and often they are selling these intense, huge ideologies through accessories— things that are frivolous. I have been taking a lot of “YOLO” themed items. If you really think about it, it’s a pretty intense, huge concept. At Claire’s specifically there was this whole corner that was branded with YOLO merchandise and then across from it was a bunch of accessories with the infinity symbol. Standing between those two concepts where everything was like $5.99 was a really surreal experience. These are the places that you come to build your identity, and this is what you have to choose from. Forever21 is kind of the same thing, just thinking of the name itself. You register it at some point but then find an object that is cute and forget about it.

What is one object that you have found that really speaks to this bizarre accessory objectification?
I really like phone cases because they are this form of a protest to the utilitarian object. You buy this phone case that is supposed to represent your identity, but it somehow makes your phone less usable—it doesn’t fit in your pocket anymore. The iPhone case, you think that it is a moment of expressing your individuality but at the same time there are a million of this same phone case in the world. I have my eye on this one phone case that I want and I am going to try and take as many of them as I can find. 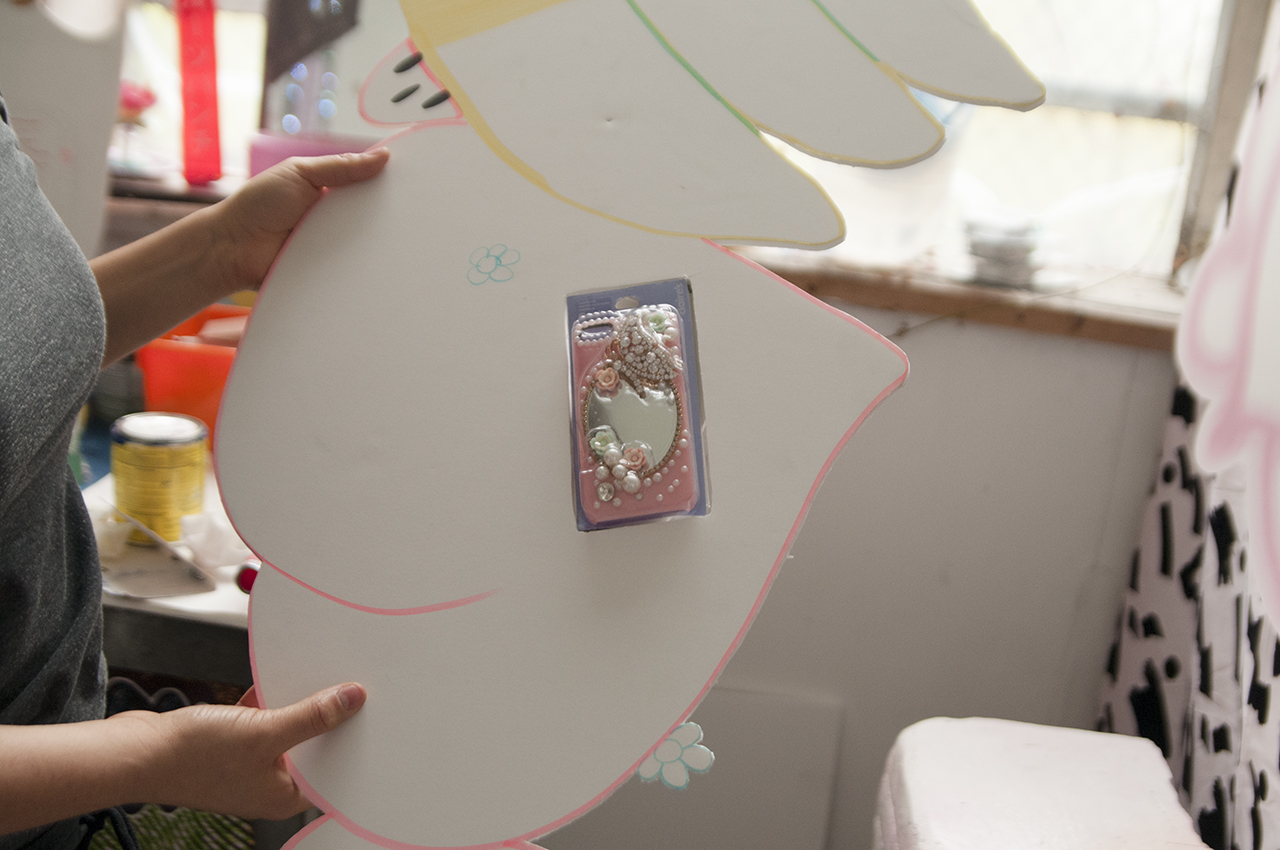 Did you shoplift when you were in high school?
I did one time. I think I did one sort of peer pressure situation where it wasn’t really fun and I didn’t care. I am interested in that role of not stealing something because you need it, but stealing it because you want it, you identify as it. 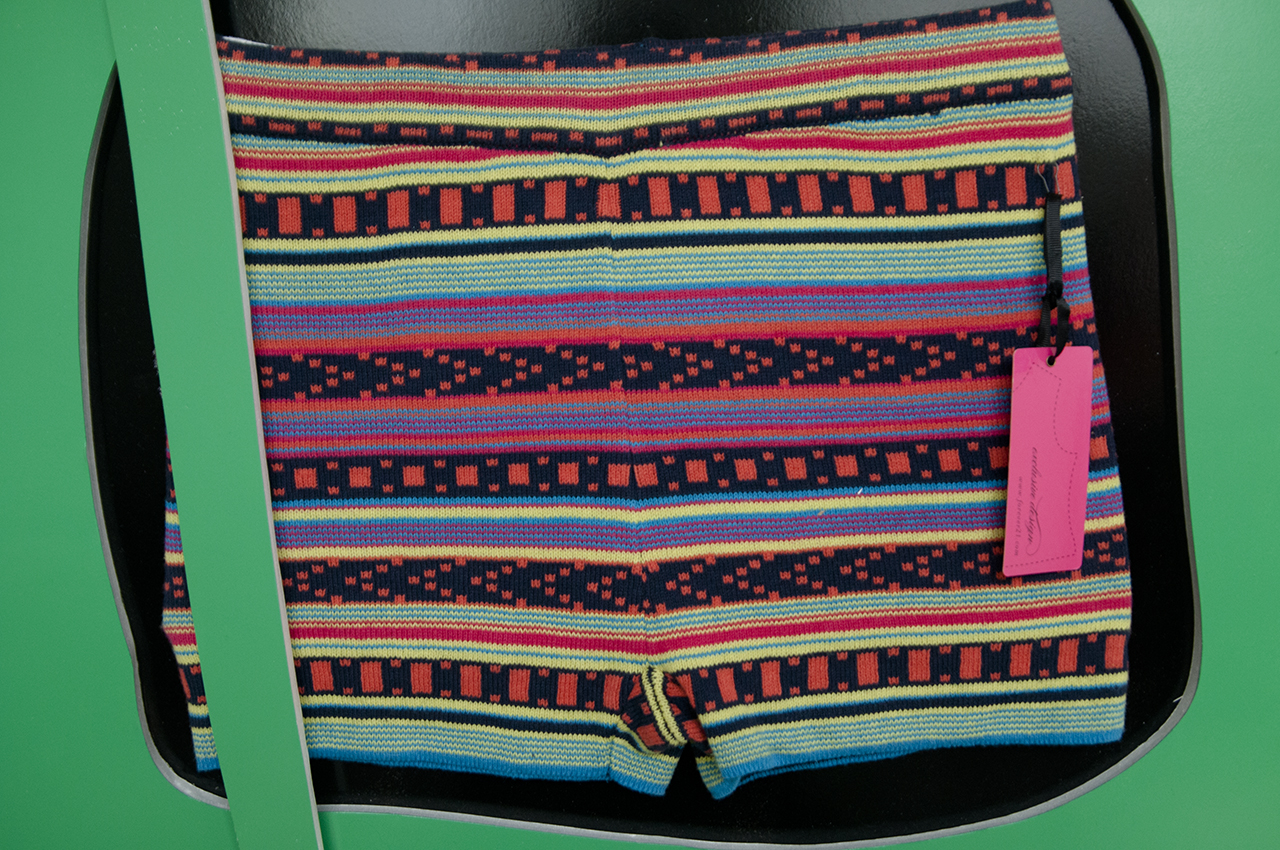 You work reminds me of a Tavi Gevinson inspired Tumblr aesthetic. Is this purposeful in your work? Do you seek influence from this online teen girl culture?
I honestly don’t know what you are referencing. I am on Tumblr, but I don’t really pay attention. I think it is just another extension of defining your identity and instead of your bedroom, it is your Tumblr page. I think it is important that I have some distance from this aesthetic. My house doesn’t necessarily look like my practice, my bedroom doesn’t necessarily look like what I create. I guess it did when I was younger, but I am less interested in it being something that I am all the time, but can turn on and off for effect. “Perform” is what I would like to say about my work when I come to the studio.

Will you explain where the text within your text-based works comes from?
Lately I have been selling some accessories on eBay. It sprouted out of this correspondence project I was having with the institutions. I was gifted a Goyard, a French leather handbag company that is super expensive, by my grandmother. She bought me a fake one without knowing it. I loved it, but it was too fancy for me and I don’t use it so I thought I would see if anybody wanted it. I had been posting it on eBay, sometimes as a fake and sometimes as an authentic and recording the conversations that I am having with these women. All of them want to know if it is authentic or not. I take the opportunity to ask why that might be something important to them. The tone is really diplomatic and I am not trying to push them to be angry, I am just genuinely curious. I haven’t fully chosen the parts that I think are the most important yet, which is why I made a teaser poster just talking about the conversations. I thought that could be just as good and as important for now.