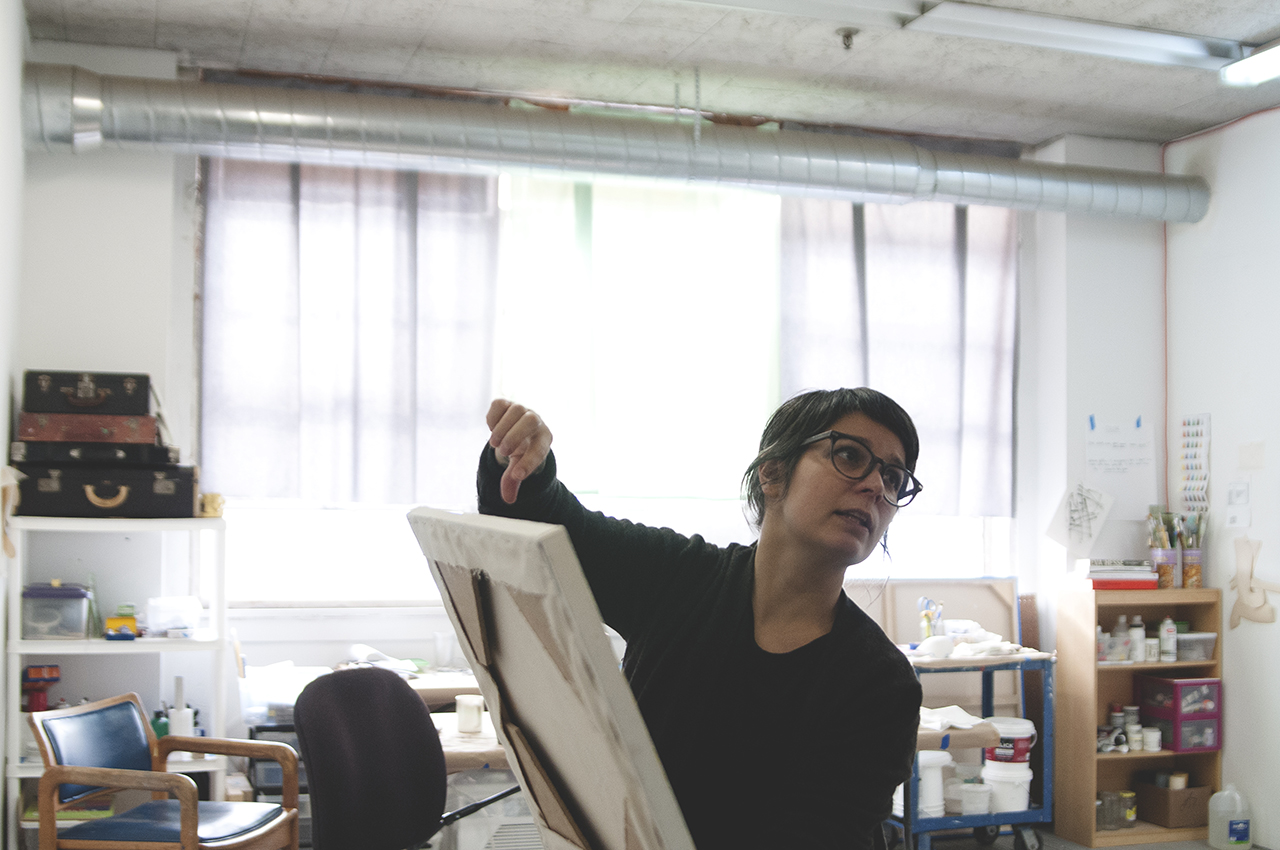 Magalie has had a relationship with a hat-like shape for the past several years of her practice, painting the shape over and over again to create a systematic style to her work. Previously concentrating on detailed ballpoint drawings, Magalie has opened up her practice to embrace color— not settling on a final palette until several layers are built up upon the canvas.

I\W: Can you explain the motivation behind your hat series and what you gained by holding onto that particular shape for so long?
It started in grad school, I was doing sketches from old furniture, mostly chairs, and the hat shape came from an old butterfly chair. The final sketch looked more like a hat than a chair. I was reading a lot about repetition in art, and I thought maybe I should focus on one thing and see how it would develop, as opposed to every painting having different imagery and not knowing what each needed. I like to work within systems, and this system was simple: one shape, one size, and repeating it over and over again. I would repeat the shape, but the painting would change every time. The idea was to focus on the subtleties and changes. I would write every day about what was happening with the shape. It became this sort of character in my studio. It became a presence, almost like a pet shape. I would ask myself how is it changing? Is it a portrait of this shape? What are its different moods? The more I worked with it, the more it felt like it was really enhancing the paintings by getting to know this one thing more and more. 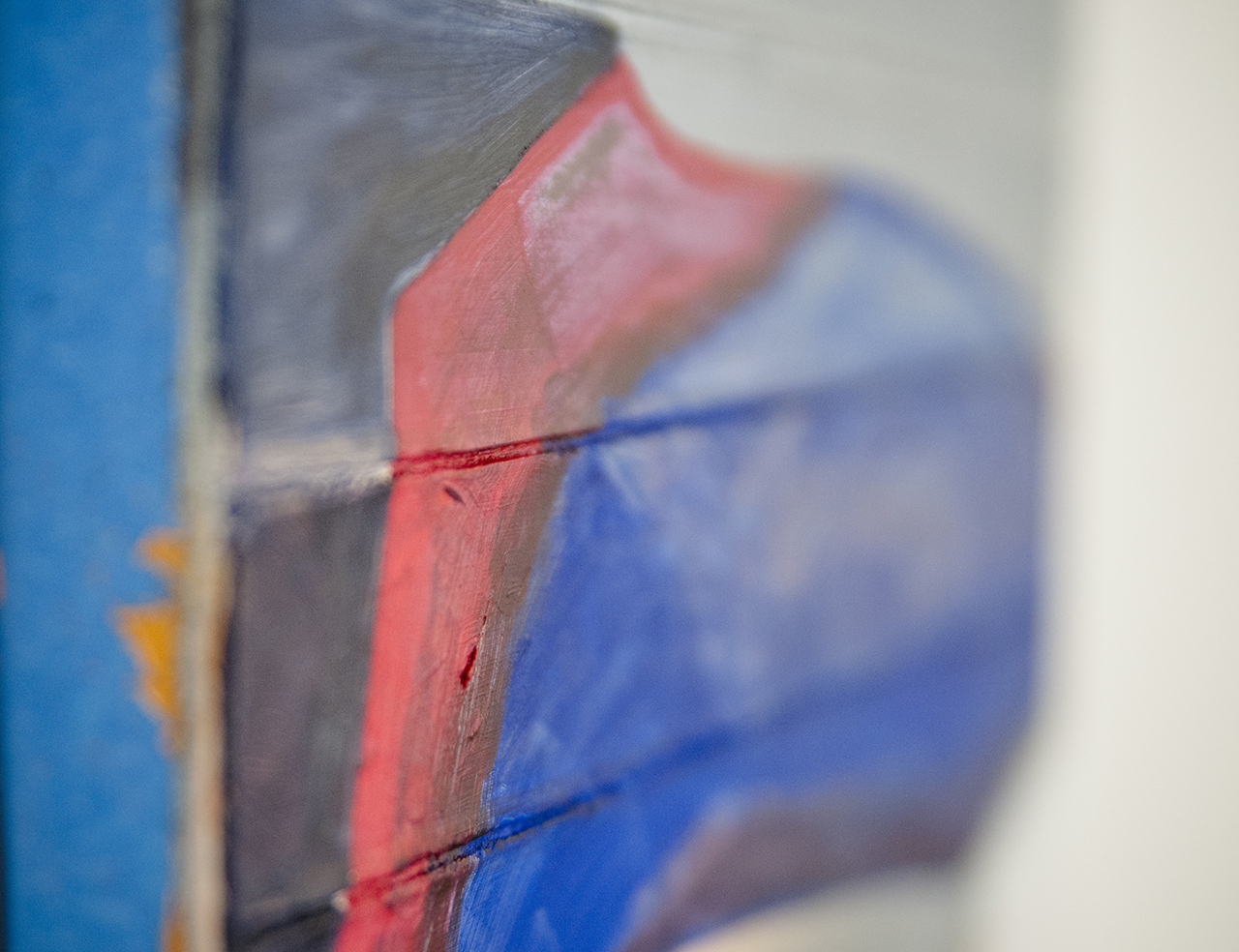 Were you viewing repetition as restriction?
Yes, in a boundary sense. With painting there are so many decisions you can make. Before I was painting I was doing works on paper with ballpoint for years. There were decisions in terms of narrative, but once they were made I would just follow through with the ballpoint application, and there wasn’t much else that would happen. When I started painting I got kind of crazy with all the different directions I could go in. It became so overwhelming that it would make me just turn around in circles. Having restrictions, especially with size, made it so I could order the right kind of stretcher and just get going. Within the limitation there is still freedom, but there is a starting point. 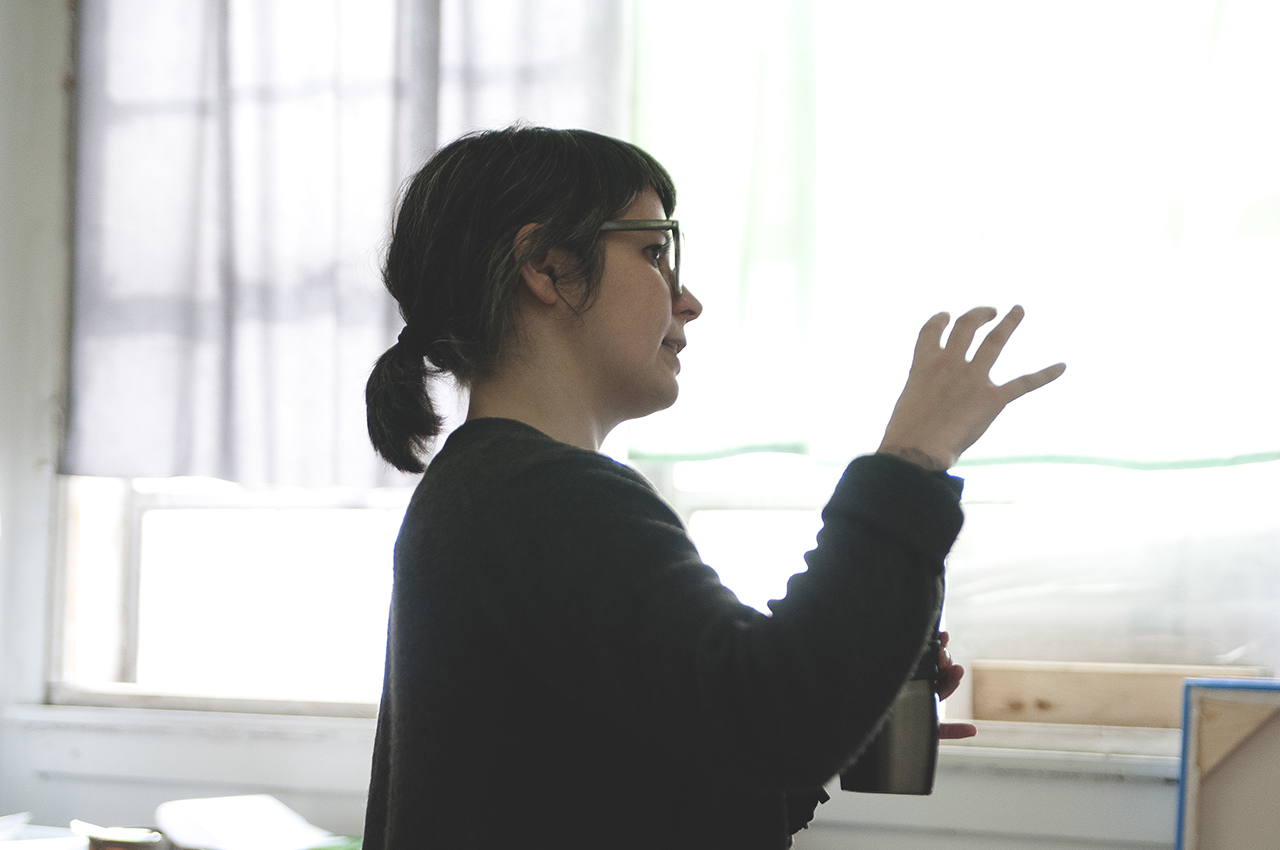 Do those restrictions allow you to focus more on color and developing intricate palettes?
Color, shape, and paint application, yes. It seems like the more I repeat something, the more and less attached I am to it at the same time. All of my paintings are very shape-oriented. When I draw a shape for the first time, I don’t know what it really looks like, and I get kind of nervous about it. What is it? What does it need? If I only do it once, it feels kind of stiff. With repetition, I become less attached to the original drawing and I can discover a lot more with it.

My paintings can get so tight, and until I do something that breaks that tightness and gets some air moving again, it just doesn’t finish. It is very nerve-racking. The more paintings I work on at the same time, the least attached I am to them and the more daring they can be.

How did the original hat paintings transition into what you are doing now?
The newer works are from the same shape, but I have begun to paint over the old paintings. I flip the canvas, I see other shapes, but it is still the original form. When I had the show at Corbett vs.Dempsey, those were older paintings that I painted over. Since I did that, everything has opened up. I still have the hat, but now I have begun to cut it up and dissect it. The shape itself is getting modified. I can change the orientation, and look closer into the shapes that are happening on the outside of it. I noticed at the beginning of my painting life that I was very worried about contour lines. I am so into the form that I couldn’t go over its contour while painting, I was bound by the shape. It was almost a joke to me how afraid I was. In the new work, I am making a point to have carved lines into the surface that I have to paint over.

How are you moving forward with a new color scheme for each new painting?
I have no idea. I really like to see the history of a painting, its layers. Sometimes I discover an interesting color scheme at the beginning of a painting, but then I continue to build it and try out many colors. When I start, I can’t have an idea of color because it has to be built. I am working with 11 or more paintings at a time. If I mix a color for a specific painting, I might look around and realize it is actually needed on an opposing painting. It is a very intuitive visual process. Working on this many paintings is my ideal, and is possible only when there is not a deadline. 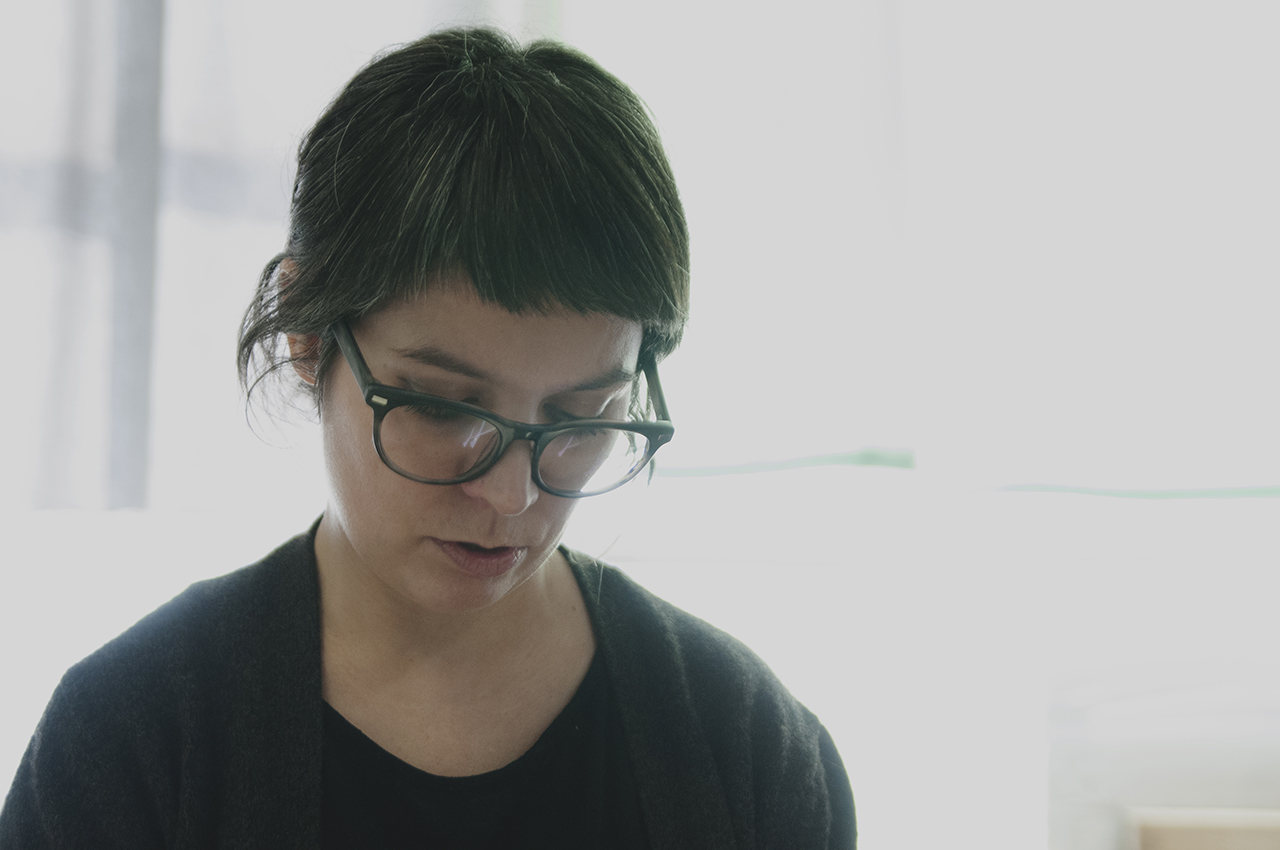 I’ve read that you describe your shapes as human surrogates, how do they act in this way?
They look like organs. The original shape people would say looks like a clover, or a uterus, or of course people see penises everywhere. So it was the way the shape looked like something bodily, but also the way the shape became a character for me. It became a companion to me. I had this weird sentimental relationship to it. My relationship to the shape became somewhat similar to a relationship I would have with a friend. I would be mad at it when it was doing something I didn’t want. It became such a personalized relationship. When you are alone at the studio a lot, that becomes the relationship you have—with the work. 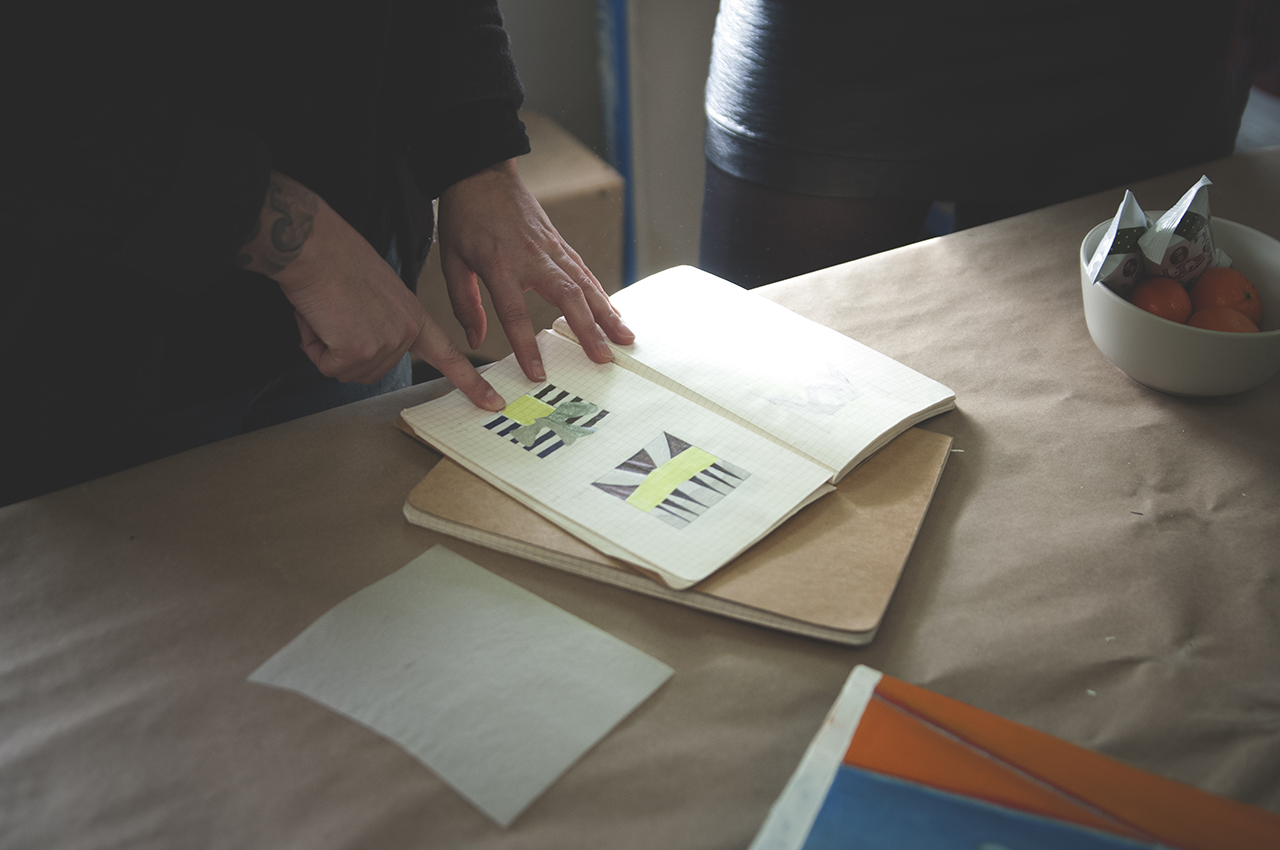 Did you notice what feelings you were experiencing towards the shape when paintings would become more or less attractive to you?
When I get angry at it, it gets better. That happened to me with a painting a couple of years ago. It was a painting called “Agnes” and I had worked on it for awhile without any preconceived composition. I got angry because it wasn’t going anywhere, and I don’t get angry very often. I took the biggest brush I had with black paint and swiped it across the painting and it literally finished it. It was so beautiful and it was such a surprise to me. My paintings can get so tight, and until I do something that breaks that tightness and gets some air moving again, it just doesn’t finish. It is very nerve-racking. The more paintings I work on at the same time, the least attached I am to them and the more daring they can be.