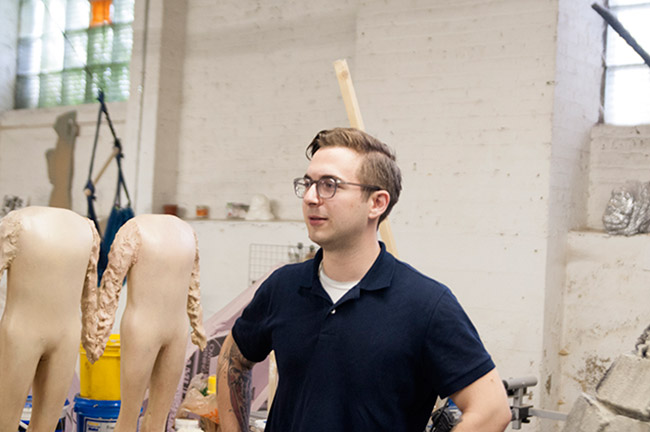 Max shares a studio with several other artists, his own space located directly within the center. His sculptures stand erect around his workspace, a small army protecting his casting process inside. As a replicator for the Field Museum, Max allows his job to largely influence the materials and processes he uses within his private practice.

I\W: What is the draw of casting parts of your own body to place into sculptures?
MG: I like to make little aspects of my sculptures hyperreal, like my piece “Stranger Danger.” By including a small hand, it makes the piece a sculpture of a costume almost. It’s stationary, and the hand creates a secondary invisible sculpture of a figure. It is just supposed to exist as this figure. It’s fun in a photograph to make something look like it is a miniature, but in reality it is actually gigantic. 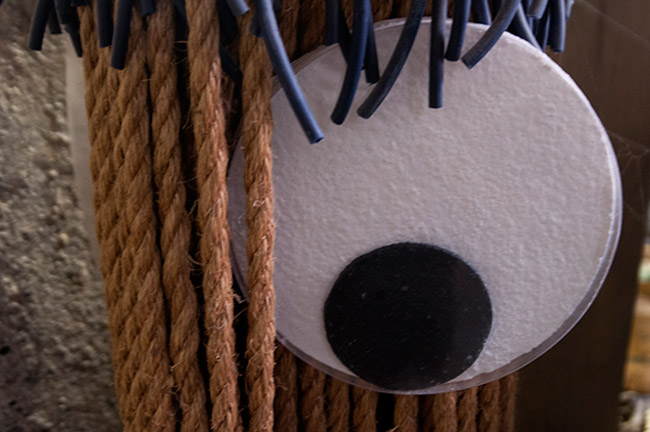 Most of your tones within your work are very muted, mostly grays and peachy flesh tones. Why do you choose to stick to such a natural, muted palette?
In my piece “Matthew” there are earth tones and human tones, especially because he looks like he is going in and out of being a human. I really like to photograph my piece “Joseph” because he is almost the color of a black and white photograph, so when you take a color photo it confuses the eye and transforms it. I think about a lot of these objects as images, and I think that is where it comes from. It flattens them out, and gives them less origin point if they have less detail. I like the flat, solid colors because then it appears as that color all the way through, and not as if it was made out of something else. “Matthew” was also an inspiration from the male and female bathroom symbols, an isotype. If I were to bring these flattened images into reality, how would I make them and what would they look like? I wanted to make my own. 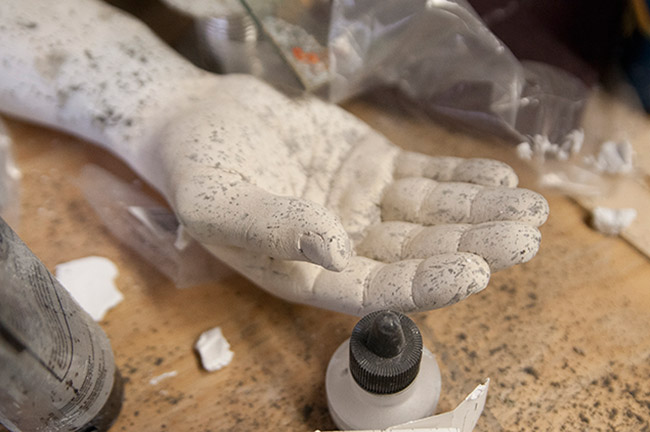 Did you model Matthew’s face off of anyone in particular?
No, I didn’t. It kind of came out looking a lot like my good friend Matthew. It was actually eerie how much it ended up looking like him. I like the name Matthew too, just because it is just Matt and I didn’t want to just call it ‘isotype’ or something like that. It was just a basic, ambiguous face, but it came out looking just like my friend. 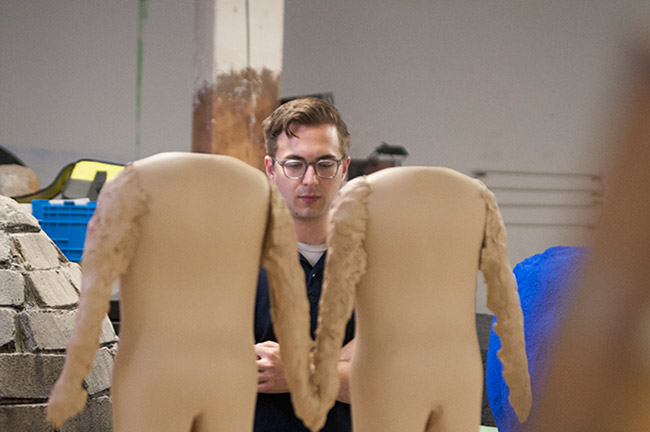 Did you choose the names Matthew and Joseph because of their biblical reference?
Yes—starting with Joseph. In Jewish folklore there is this story of the Golem. A rabbi creates a being out of mud and dirt to protect the Jewish people in a time of need. Its name was Joseph, and he was brought to life and then destroyed by the rabbi. I like the name because it is biblical, but it is also ‘Joe’ which is like nothing almost. This figure is pretty grand and amazing, but originally Joseph’s form was from a small clay figure that I made. I 3D-scanned the object and then blew it up to be 6 feet tall. It is cool because it is something a child could make, but blowing it up that big made those marks in the clay too big for a human hand. It creates a third object—the hand of God making it.

I\W: How does your job as a museum replicator inform your personal practice?
Lately I have had to make two of every object, which is unique because I was making duplicates of a show. It was interesting to make two identical objects by hand, and I am currently channeling that into a twin sculpture. The biggest thing at the museum is creating objects that are convincing. That is the main thing that has informed my practice. I like making things that appear much heavier than they actually are, or creating things that look like they have been naturally weathered by earth. That is something I have to do a lot at work that I really enjoy. It makes it seem like my practice is almost making found objects. 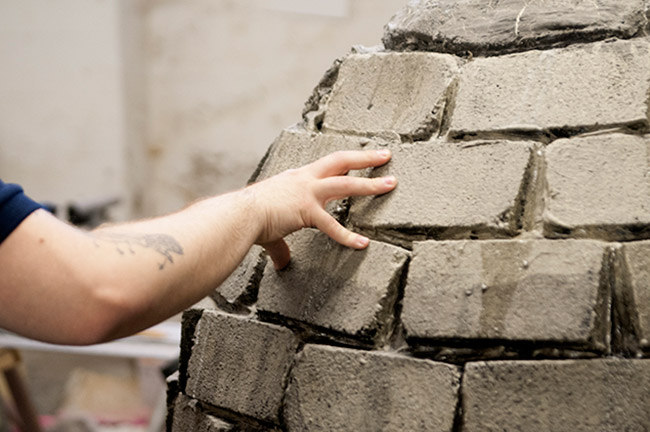 A lot of the objects I make are based off of convincing the audience that I am a different kind of artist, or this invisible artist. If I was an artist that created something based on just reading about art my entire life instead of experiencing it, what would that look like?

What is an object you have created to look as if it has been naturally weathered?
I love monuments and statues, so I started a piece with me thinking about the Statue of Liberty and how amazing it is as a sculpture. I wanted to create my own Statue of Liberty with a personal filter. “Tired July” is tall and heavy, and is something that I wanted to create that looks like it has been outside for a long time and I just so happened to drag it back inside to present to people. The sculpture is a distillation of main points of what the Statue of Liberty looks like.

Why are you interested in having the objects you create appear as outsider art?
A lot of the objects I make are based off of convincing the audience that I am a different kind of artist, or this invisible artist. If I was an artist that created something based on just reading about art my entire life instead of experiencing it, what would that look like? I like the idea of messing with the viewer a little bit. They don’t know who I am actually as a person, and they just see these objects I make. How can I change who they think I actually am? One piece I started awhile ago that I want to get back to making is an object that I engraved all of this Japanese text onto. I have no feelings towards Japanese culture, but how can I convince the viewer that I am Japanese, or I have a connection to the culture? 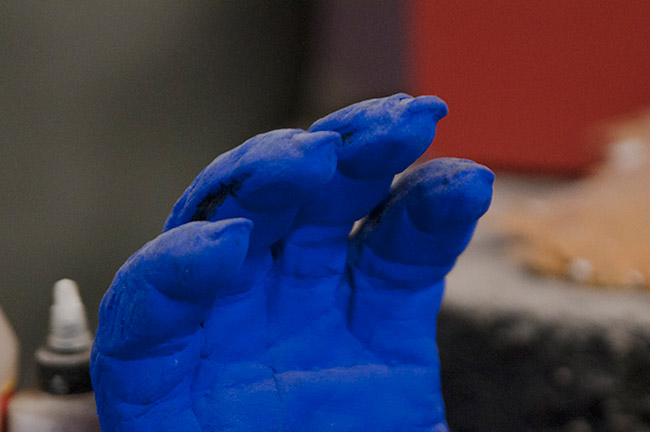