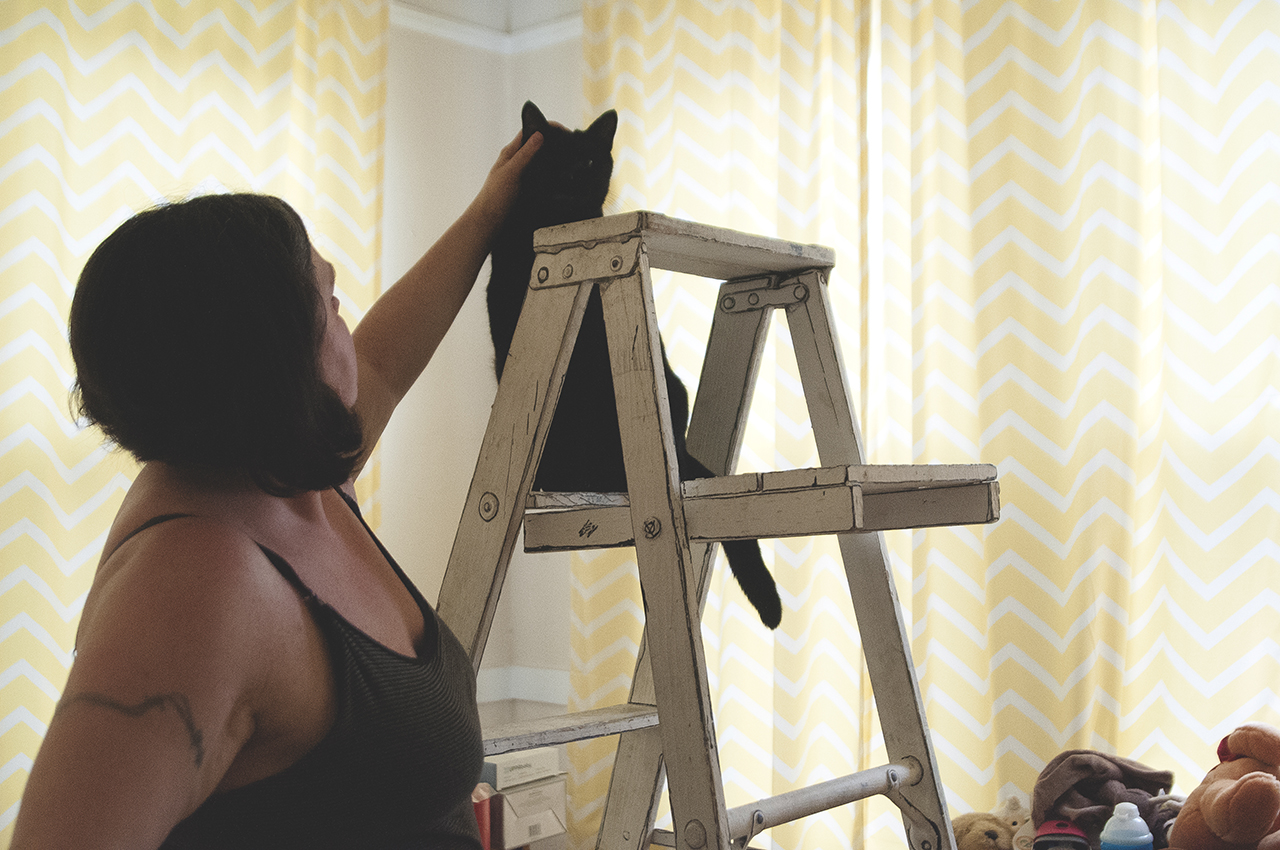 Located within her home, Meg’s studio travels to any room that fits her current need, covering an upstairs wall with details from her upcoming film while filling another with suitcases that carry the rubble of past works. After optioning the rights to James Agee’s 1947 script “The Tramp’s New World,” Meg has begun to explore the new roles the project has provided, creating performance through her position as director, and becoming comfortable within the new territory laid out as filmmaker.

I\W: Can you talk about why you decided to start Clutch Gallery?
MD: I came back to Chicago from Brooklyn in 2009, and I was supposed to open an art space because that’s what Chicagoans do, especially from my generation. So I opened a space in my space, a purse. I bought a wooden purse on eBay for $5, sanded it down, and put the walls in. That started Clutch Gallery, a 25-square-inch white cube located in the heart of my purse. When I carried it, my wallet and keys and cellphone were placed in the sides and the artwork was placed in the middle. I used it every day as my purse and an extension of my performance practice. Carrying Clutch helped me figure out how people in Chicago interacted, not just in the art world but everywhere. If I bought coffee, I opened my purse, and there a show was. After two years, I felt done—carrying Clutch started to feel like more like a Sisyphean task instead of Herculean one. The purse hadn’t broken yet, and you don’t throw out a good accessory unless it breaks. So I started lending it out, because that is what you do with good accessories. Now, other curators curate and carry it. I don’t have rules that they need to carry it wherever they go, or that they shouldn’t do this or they shouldn’t do that; they don’t need to do what I did, as they have different sorts of practices. Now I consider it a tool for others to use instead of an extension of my own projects. Once Clutch is done, when it breaks, I will gather everyone’s documentation up and do a 7” x 7” catalog to show all of the shows in their 5” x 5” life-size scale. I am excited to have a gallery that you could make a catalog that was actually to scale. 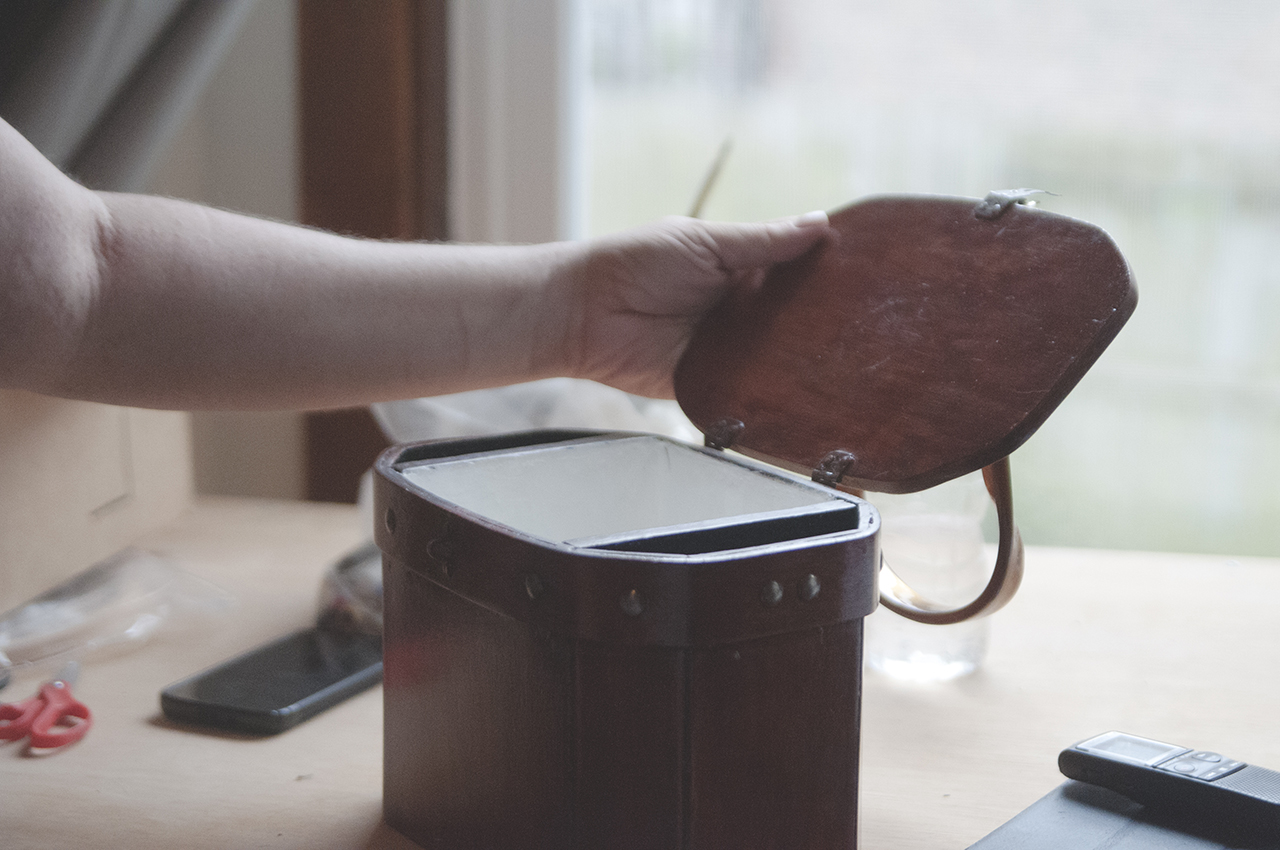 How do you consider yourself a performance artist with a studio practice?
The idea that a studio practice should function alongside a performative practice doesn’t seem alien to me. The fact that objects and space should be created and met within a practice seems very, very natural. A lot of people don’t know how to talk about performance work. It is talked about in relationship to theater often or as if performers just went to a space and did that thing or with that section of public. That is not how I see it. If you can’t talk about it in terms of composition, movement, and concept, it doesn’t work. Performance art came out of visual practice; it was an extension of visual composition into action and movement. I think the traditional media has always been there for performance in both the genesis and the documentation of it, so really I am just treading its material history. 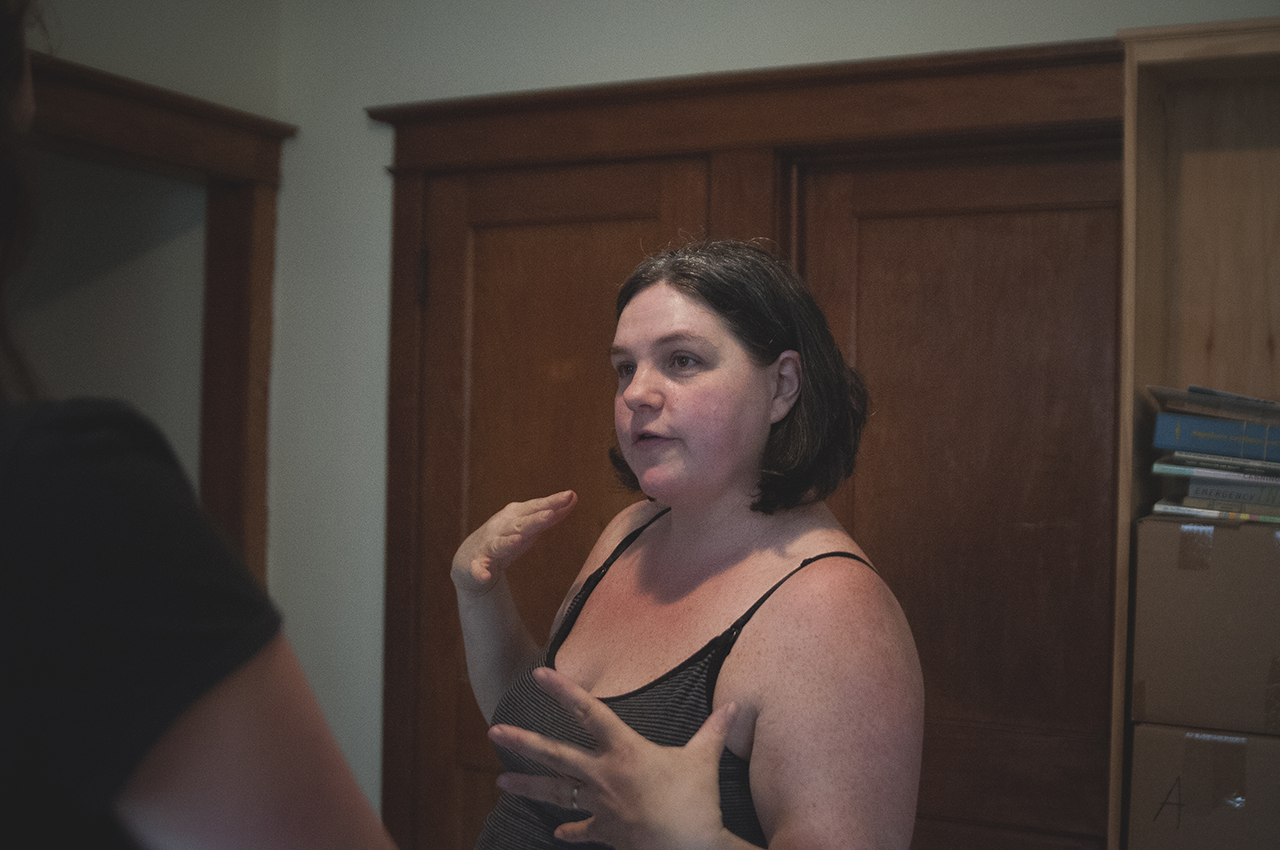 How have suitcases found their way into several of your projects?
The suitcases were really just used to carry things to one performance, “Everyone is a Bathing Beauty,” but things started to push in and pull out from various projects, and I found I wanted to use them again.

There are objects and materials that I like. These things constantly find their way into my practice—suitcases, mustaches, bubbles, bubble wrap, ladders, and Tyvek suits. Those things seem to run in and out of my process, and they have since I started focusing on how performance and documentation intersect. For a time I thought my work was about comedy, and once I realized it wasn’t and that I just really liked to research comedy, I let go and allowed myself to like things and reuse them. In that way I found suitcases really useful. The suitcases in my studio are from two pieces, “Rider Negotiation” and “Produced by Hole for Shaking Hands.” The latter was a from a piece I did at Slow that was literally a hole cut in the wall and people could shake hands through it. I was invited back the following year and removed all of the drywall off the stud structure except where the hole was and packed it in suitcases. During the run of the show I performed “Rider Negotiation,” which was just bringing the cases home. I now see “Rider Negotiation” as carrying weird objects between two places. Someday I will do another “Rider Negotiation” and put this wall back up someplace, and it will be a completely ridiculous wall because it will have been so mangled that it will need to have plywood underneath to be able to hang anything on it. But for right now the suitcases sit there in my studio…until they don’t. 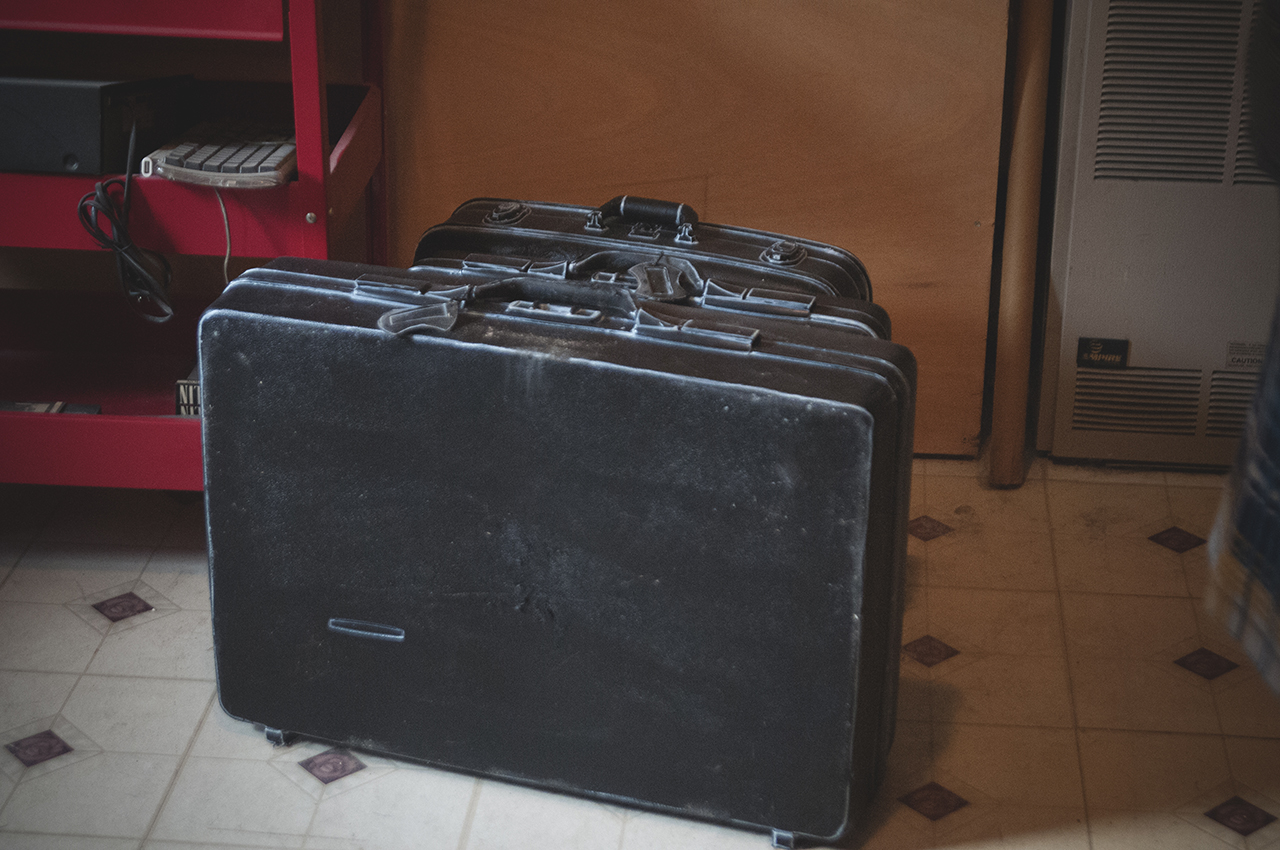 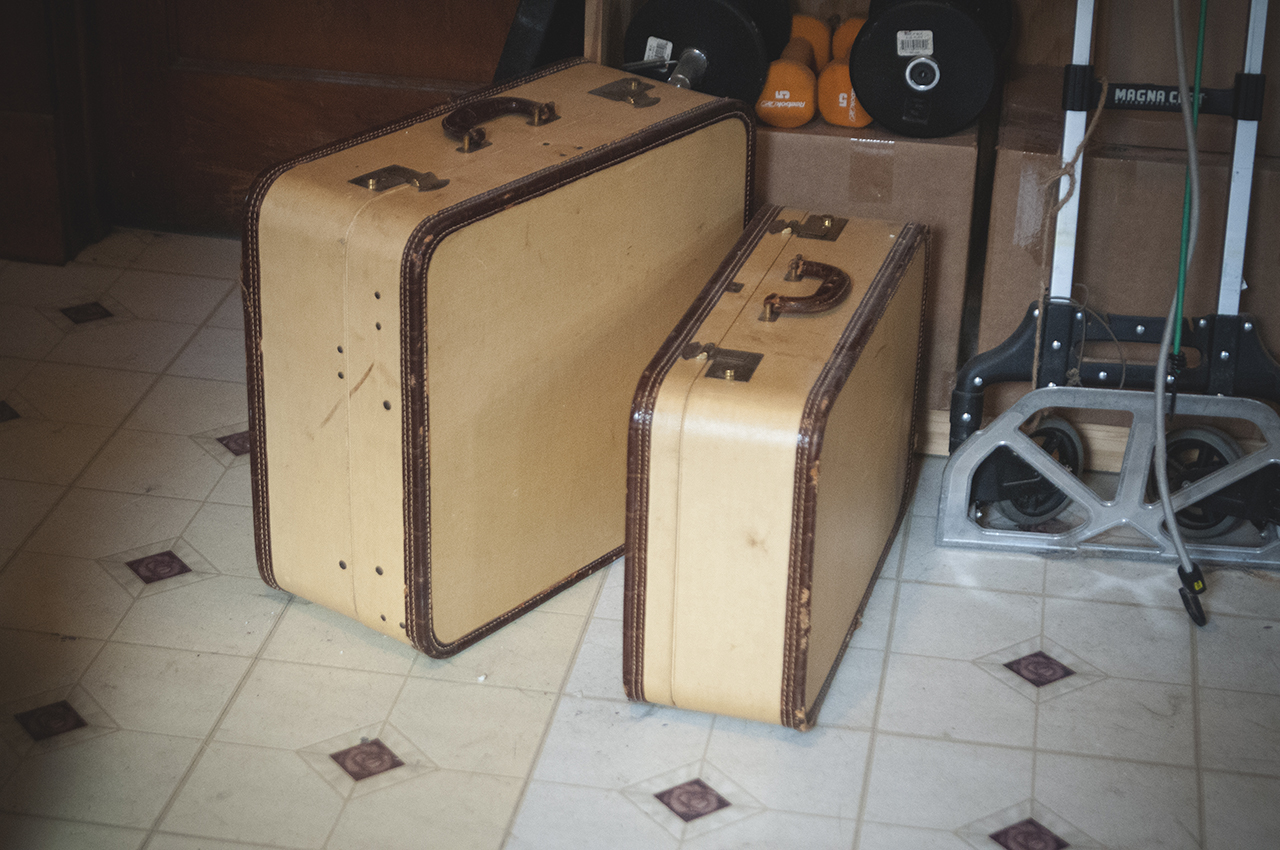 What other objects have you smashed and re-formed?
I did a fundraiser for my Tramp project where for $5 people could get on a ladder and smash a plate to make rubble. I swept all of the rubble into a suitcase, and now I have rubble for my film—I need rubble in the post-apocalyptic world. The suitcases holding the rubble will get painted black and white like the other suitcases or the ladders. The flattening of an object with black and white creates a weird materiality—making something look like a cartoon. There’s also a joy I get from making it too. 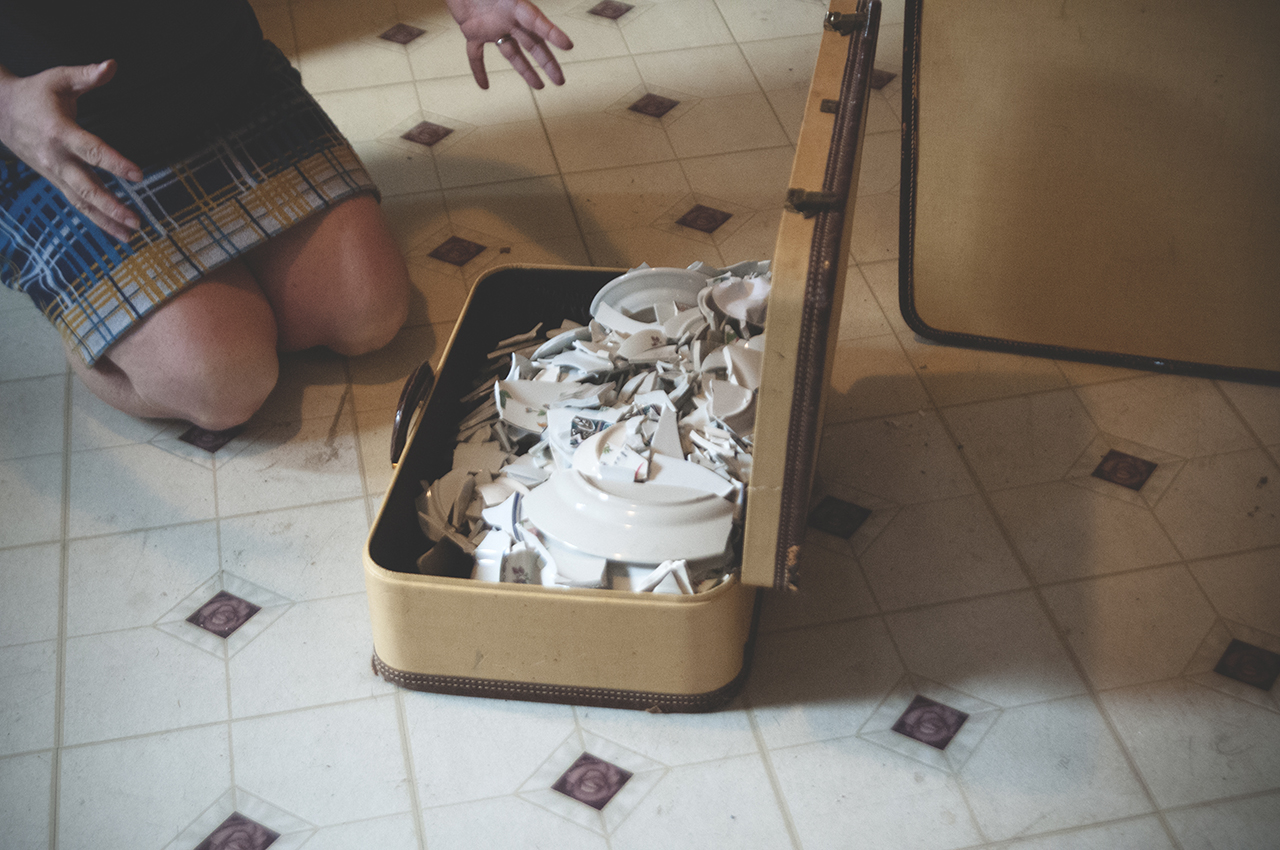 This prompted me to decide to break all of my sets for the Tramp project down into suitcases, so all of the sets will be a pile of suitcases that can be set up, and then I can complete more Rider Negotiations. Bringing them from place to place.

How do your projects function on their own and also as a larger idea? Both your show at Slow and the SUB-MISSION existed on their own, as well as created work for your Tramp Project.
Both of the exhibitions at the SUB-MISSION and Slow were a part of the Tramp Project. For this project I have optioned and am adapting “The Tramp’s New World,” a script that was written for Charlie Chaplin’s Tramp character by James Agee in 1947. Essentially I have been breaking the screenplay up into a series of performances, exhibitions, and installations that are or are related to the making of the film. At the end of this process I will have a short feature silent film that I would like to screen to multiple audiences while an experimental band plays a live score; the live score is then edited into the films, which are then rescreened to a new audience…

The narrative is amazing: It’s a post-apocalyptic romp where a super-atomic bomb is dropped, leaving seemingly just one survivor, the Tramp. As the picture unfolds, it is clear that others have survived and are coalescing around two separate and completely different communities—the Tramp’s community, which is rebuilding a community by hand, and the community of scientists who created the technology for the bomb and who restore their technology and mechanized existence.

At the SUB-MISSION I made some of the credits for the project by documenting a papier-mache mushroom cloud created from a paper city I installed on the walls. The piece was created over the run of the 5-week exhibition and documented as it grew.

I have been creating stop-animation storyboards for the work since 2013 so I understand how all the parts should come together. At Slow, I exhibited “Supercomputer,” which consisted of all the storyboard animations that I created to map out how to make this project, displayed on 16 old monitors; this installation will later be re-installed in the film in the scientists’ underground lab as a part of the lab’s massive computer that tells the scientists what to do. Look out in the fall for a ton of performances in and around Chicago relating to this project. 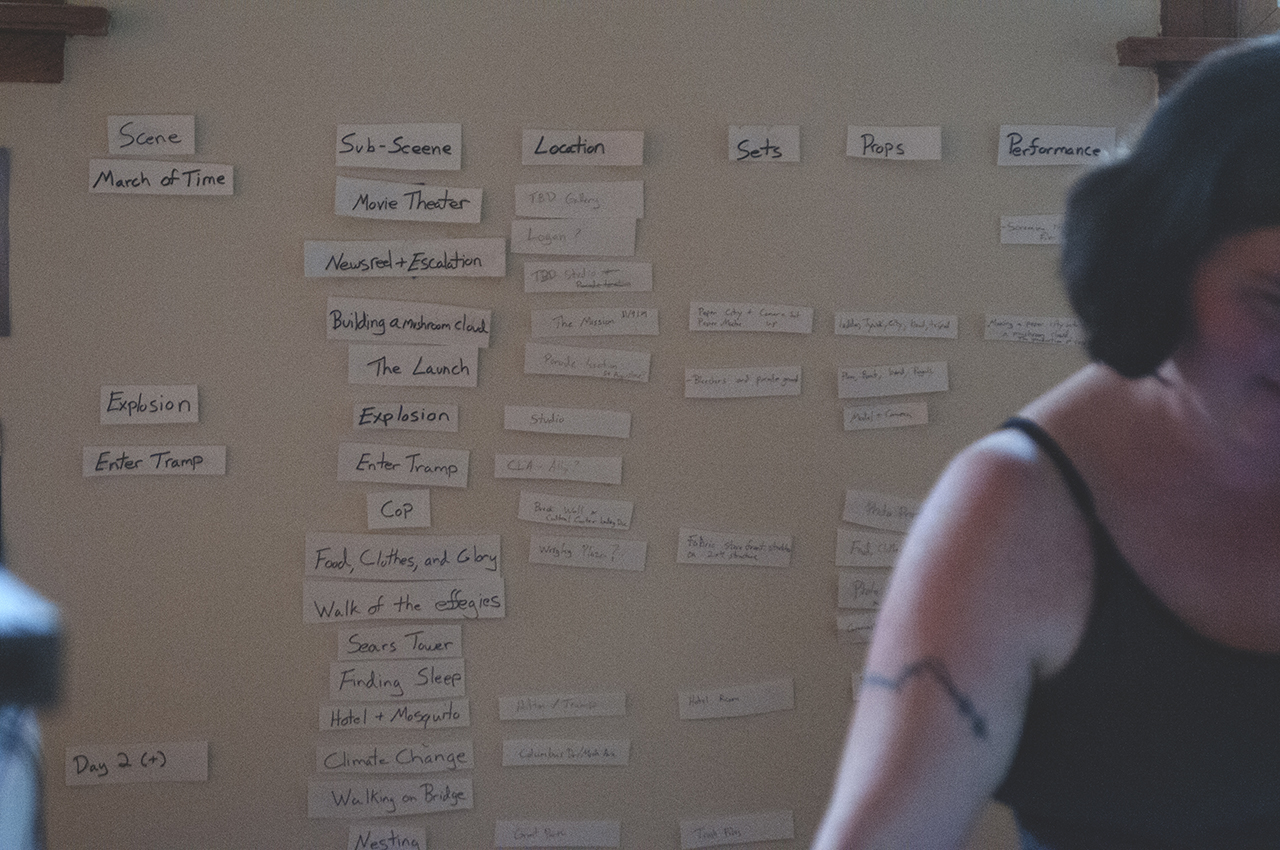 I\W: Can you speak about the sets you are building for the film?
Most of the sets I am building take advantage of the black-and-white cartoon process I use for my ladders and suitcases. I have what I call an analog Excel spreadsheet that’s taped to my wall. It contains the scenes, sub-scenes, locations, sets, and props. I have a few scenes I need to make models for, like the explosion of the atomic bomb. I need to blow up the city of Chicago, and I don’t think I can do that any other way than with a model. So I am going to build models in suitcases so that when open, they actually function as their own stands for shooting, and when closed, they are just suitcases. Last summer I also exhibited “Prototypes of the Tramp’s community” at Terrain so I could get a sense of the look and feel of that set. 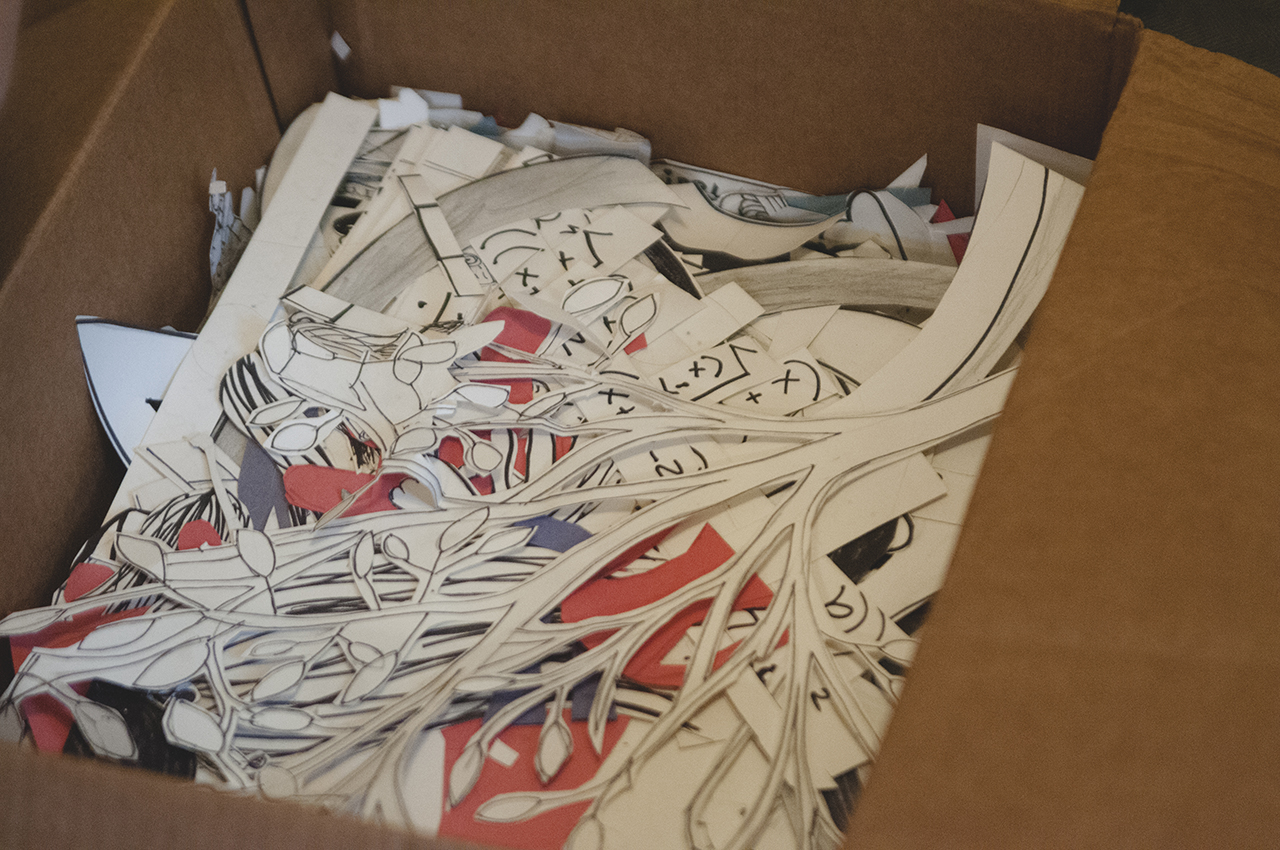 I am really interested in performance as the shooting of the film, director as performer, people as medium, and prop as object. It is a process more than an outcome, although I want to like the outcome too.

Are you worried about the cohesive quality of the film, or is that part of the styling for the project?
I am absolutely not worried about the cohesiveness in relation to the performances. The performances are not going to be cohesive and maybe not make any sense in the order that they are performed. I am still working on the black-and-white motif for the sets, although the documentation will be in color. My hand will be present through the film and performances; they will look very handmade, and that will help with the cohesion. It won’t be cohesive in the way that things are classically cohesive. I am not so worried about true performance documentation; a lot may be altered from the time it is shot to the time it is presented as the film. I am really interested in performance as the shooting of the film, director as performer, people as medium, and prop as object. It is a process more than an outcome, although I want to like the outcome too. This is also an exercise in my knowing I am not a filmmaker and how that plays out in making a film through my process. 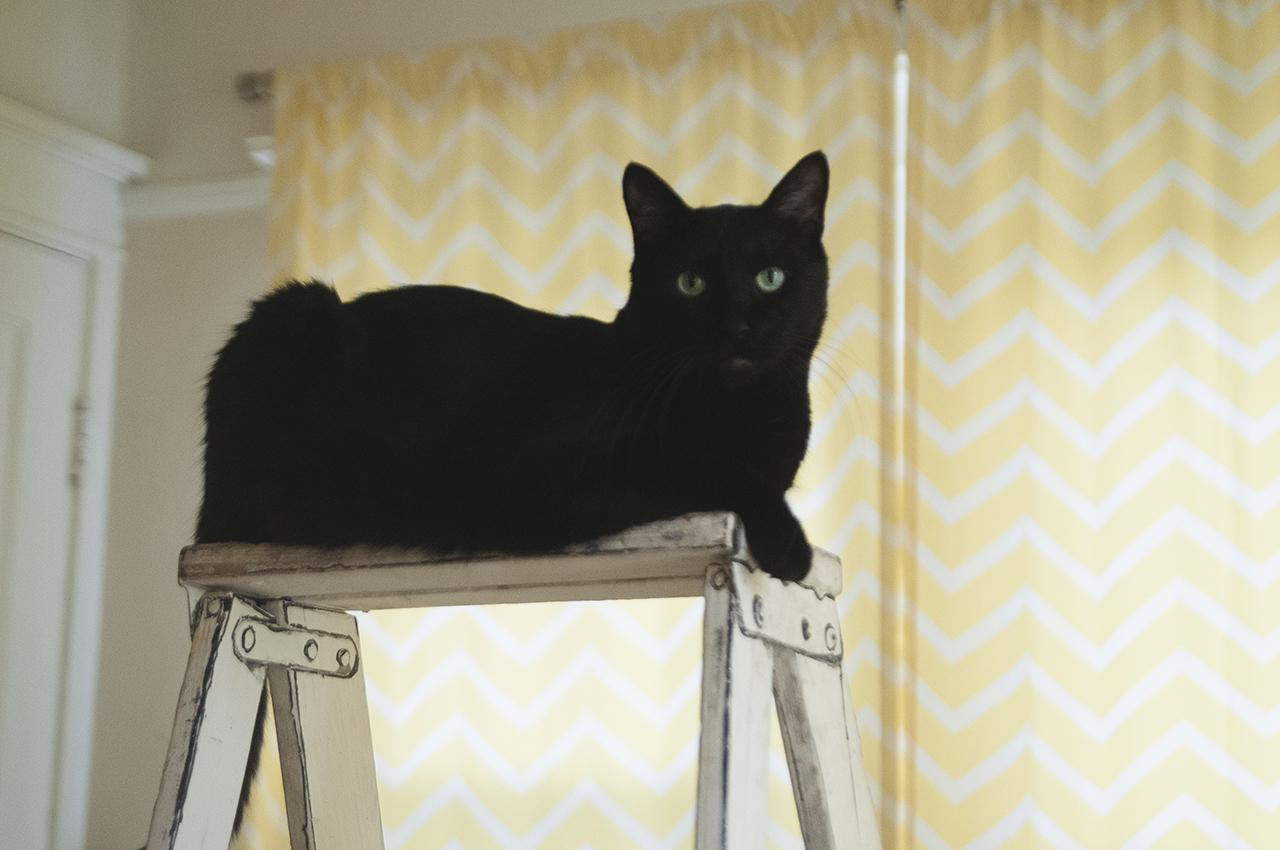