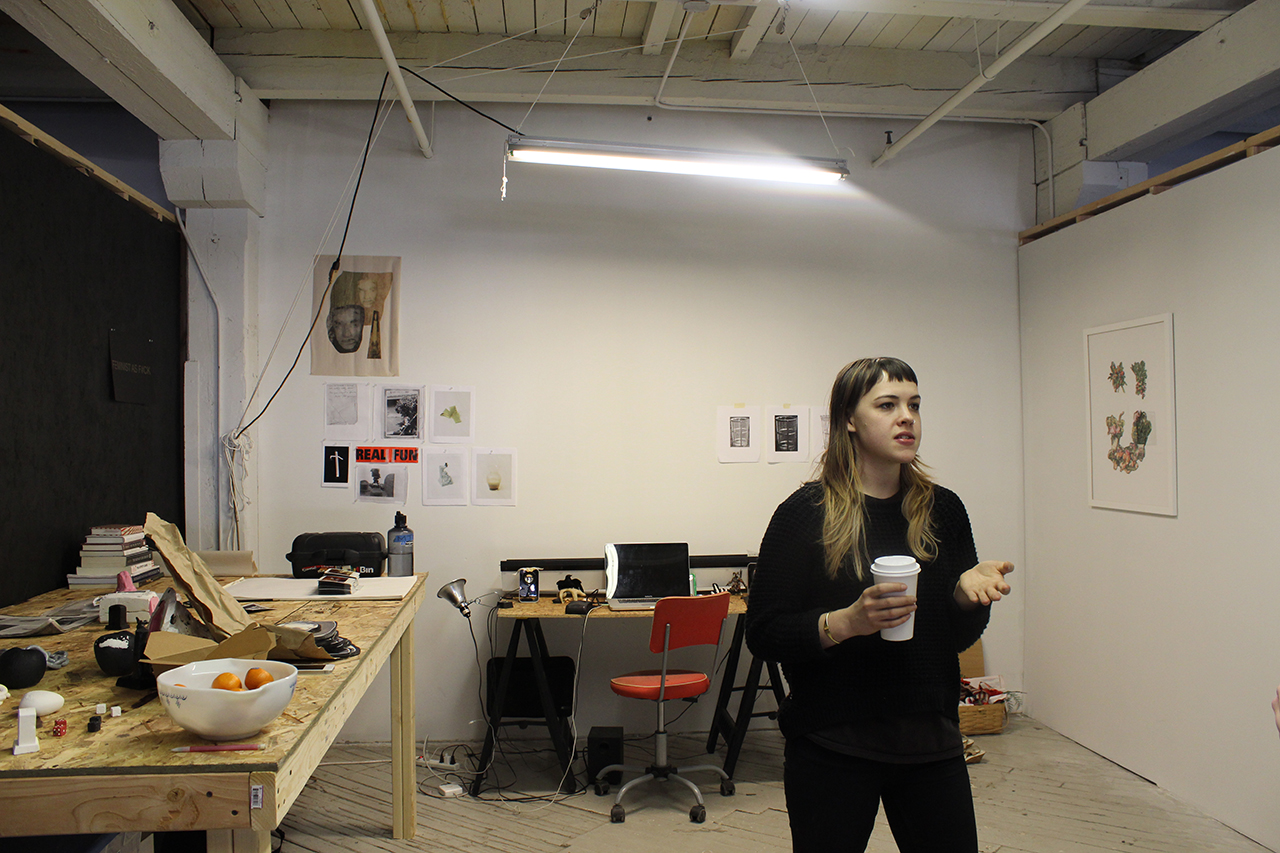 Meg recently graduated from Columbia College Chicago and moved into a minimalistic studio she shares with three others in Pilsen. Picking through cemetery refuse, Meg satiates her necromantic obsessions while dually finding inspiration for her digital and film photography.

I\W: When did you first see that you needed to expand your practice beyond just making photographs?
MN: I think when I was in college there was a certain point when I realized I was always trying to make my work more tactile. I was trying to find ways where I could physically mediate with the image, and even when I would try and make sculptures, they would always have some photographic tangent. I would manipulate photographs into a shape or make a mobile. I think I’ve always been a tactile person. Working with other materials directly became an option—the ability to learn something new. I don’t know that anyone stops doing that. I feel like I am in a place where I am trying to learn as much as I can. Right now I am especially interested in casting processes and mild woodworking. This is my first studio detached from school so I don’t have those resources anymore.

What sort of casts have you been making?
I have been working mostly with plaster, resins, silicon and alginate. Just really basic stuff, and trying to tackle one form at a time. I got really interested in making casts when I started working on this project Black Sun, which was making a visual index of objects and place, and pointing to memory that referred to my necromantic impulses. From traversing cemeteries, to working in my former studio (which was in the basement of a funeral home), to finding everyday objects. I started to culminate this index of works that ranged from digital and visually fabricated to a pair of dice and very small gestures. I wanted to remove an object one step from reality. I wanted to kill that object, and replace it with the casted object. Literally fill it with a charged sentiment or emotion about how I saw or imagined it to begin with. 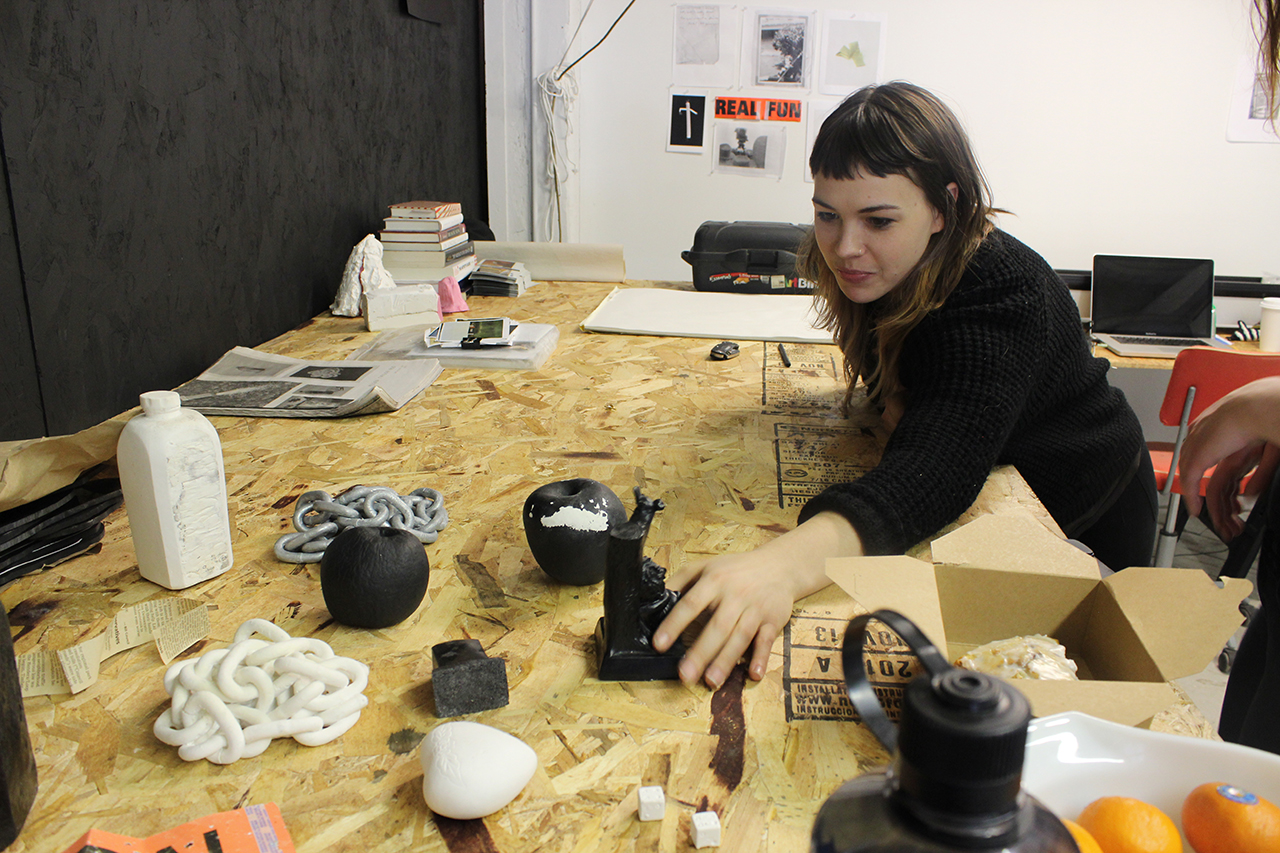 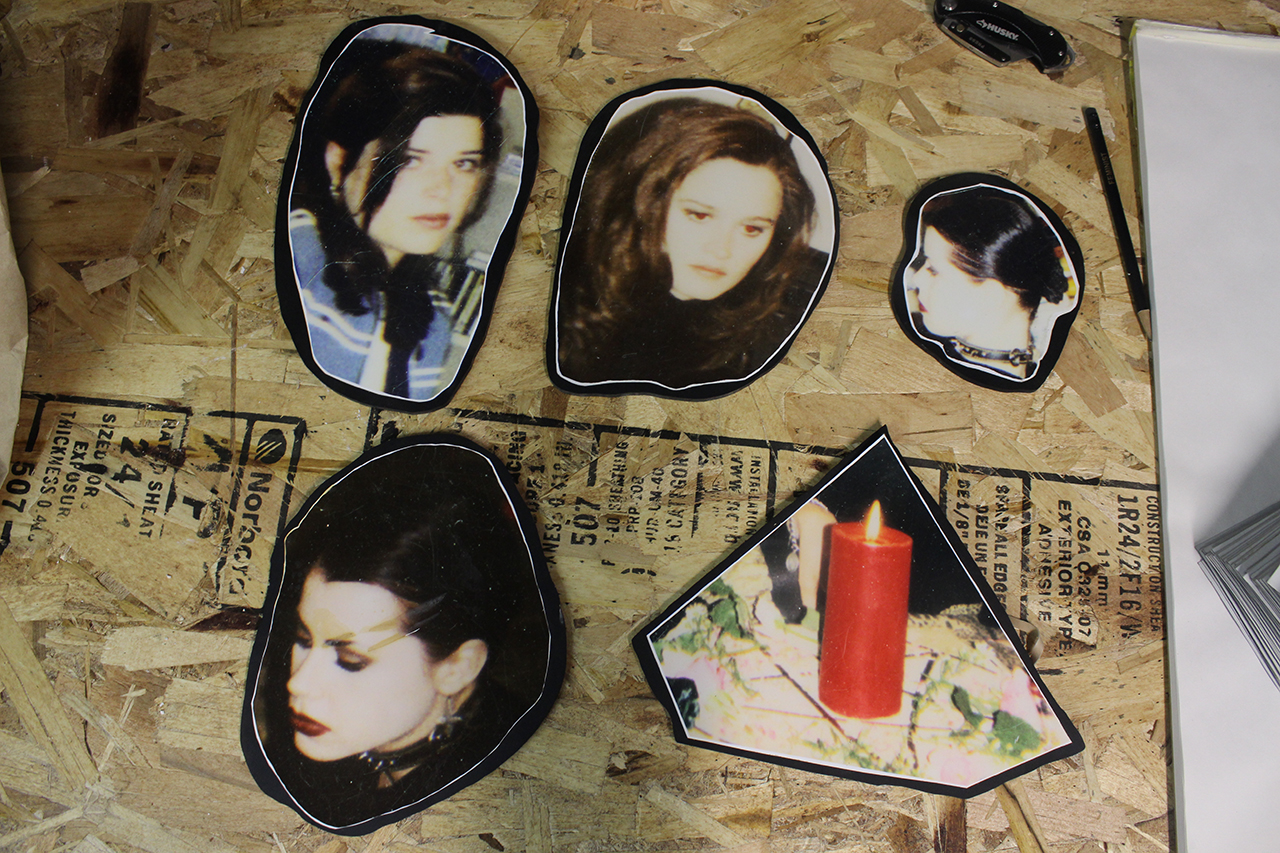 Explain your attraction to the movie “The Craft?”
The Craft was a really important movie for me. My sister went to college when I was eight, and one day she let me pick an R movie which was a really big deal. Something about seeing a movie where women were these heroes, but also evil and good. Good and evil in this character of the witch was really interesting to me. I continue to look at this movie as some subliminal message for what I turned into or something. It was a weirdly informative movie.

I have these polaroids that were used for the movie as well. One of my neighbors was this really eccentric art dude and he would sell furniture he found in the alley on Logan Boulevard. I was floored by finding them. He wanted to throw away so many of them. At the time I was trying to make work about kitsch. I was working on these photographs of Halloween decorations and trying to make these classic Southern Living, very commercial photographs of people’s nice homes but there were death objects out front. That was kind of a failed project, so at the time finding these was amazing. It spoke to this witchy-kitsch that I was working on. 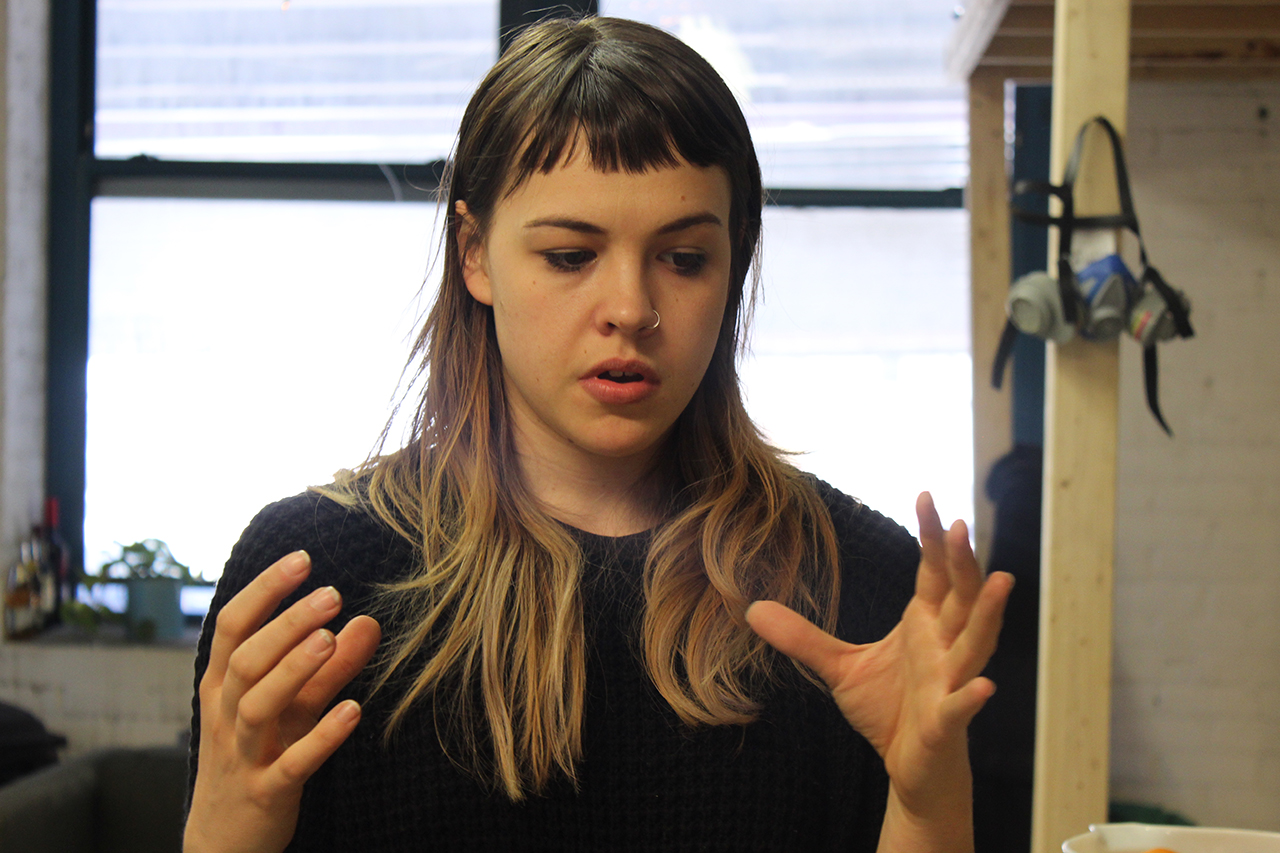 How have you incorporated the polaroids into your work?
I started scanning these photographs, and then was making these really quick digital collages. Very simple, fast gestures which I liked because they had this immediacy and I was wanting to just throw a bunch of shit out and make it cheap. I was printing on a lot of newsprint. I wanted to make a lot of things that were crassly made, but easy on the eyes. I eventually made this mobile. I would take the characters’ heads and I called this piece “Hail to the Guardians of the Watchtower.” There was a mirrored black side on the back. Like the collages, I wanted the faces to be really quick. I didn’t want to photoshop them, I liked the graininess of them. I wanted to amplify their distortions. It became evident that they had been repurposed. I didn’t want to talk to the movie as much as I wanted to talk about the characters—they were symbolically decapitated.

I realized I was always trying to make my work more tactile. I was trying to find ways where I could physically mediate with the image, and even when I would try and make sculptures, they would always have some photographic tangent. 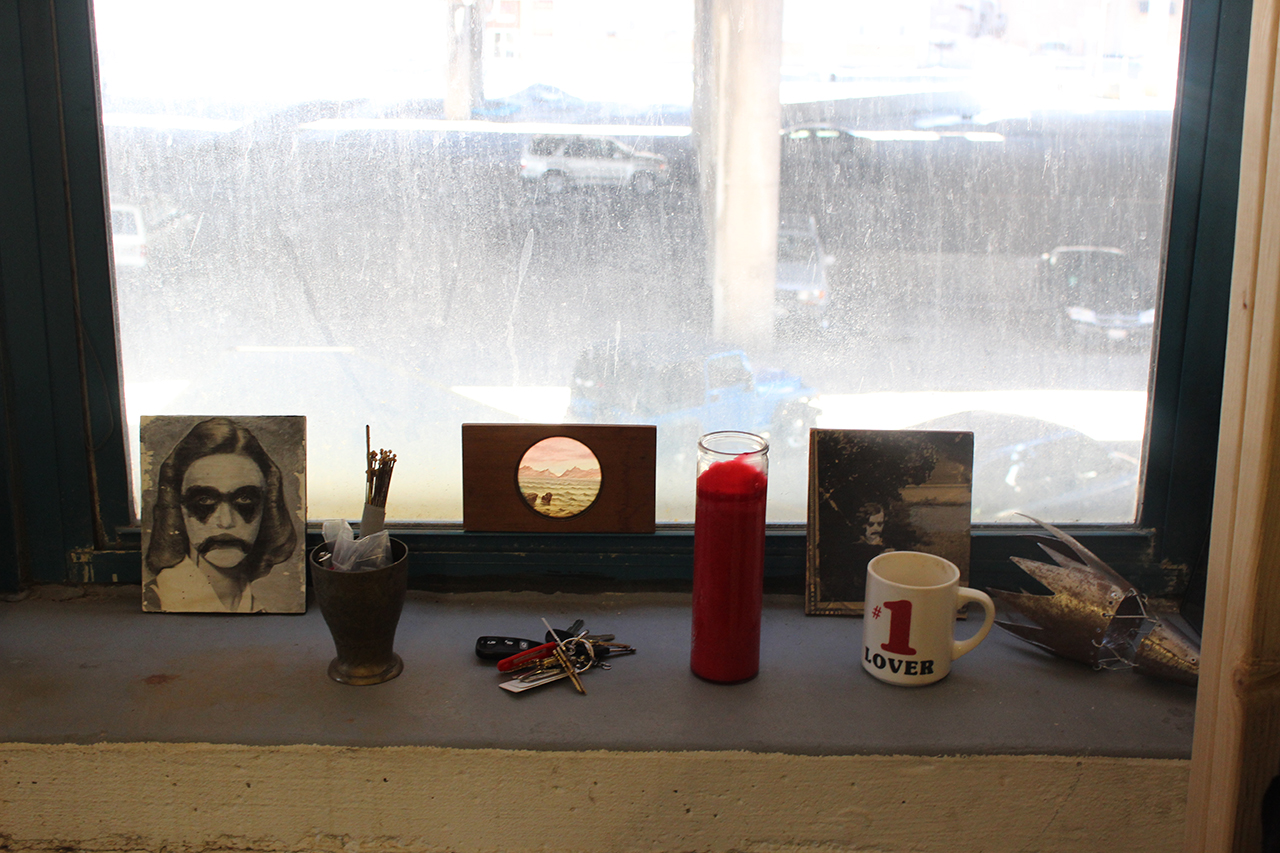 Did you feel a struggle when you stepped outside the bounds of photography and into performance?
Kind of. I feel like when you base so much of your work on one discipline or you spend so much time investing in one discipline, when you you jump to another one there is this level of uncertainty and fear. There is a regimen in photography, there are steps. Going to something like performance that is so loose, there is nothing that could tie conceptually what the boundaries of performance are.

Do you have a specific idea for an experimental film you want to produce?
I have been wanting to make this video that is based on a daydream I had. It’s surreal, but I was awake. I think at the time I had envisioned the film, I realized that I still have a fear of death, no matter how much my work focuses on it. A lot of my dreams are about running from death or escaping death somehow. I was laying in a cabin, staring at the window at the twilight at this very beautiful tree that was lit by the moon. I have a hypnic jerk, the convulsion you have before you fall asleep—which is because of stress. In this dream I started thinking about how this shutter is the thing that is keeping me from death. Sleep has always been an analogy for death. This film is going to be three long takes of just a beautiful forest at night, really long dolly-tracked shots. This sort of sublime, meditative visual where the narrative is illustrated by the sound. I think more so I am interested in the pairing of sound in video in the way that it creates such a visceral experience for the viewer. I have always loved how film and sound can do that. Photographs on the wall can’t do that. There is a certain amount of visceral experience that you could experience if you could be in my perspective when I am making these works, but that is really hard. You have to find somebody really empathetic. Find someone who is really compassionate, someone that is really looking for that moment. Film puts you in that moment. I like the idea that sound can take you further than the visual. 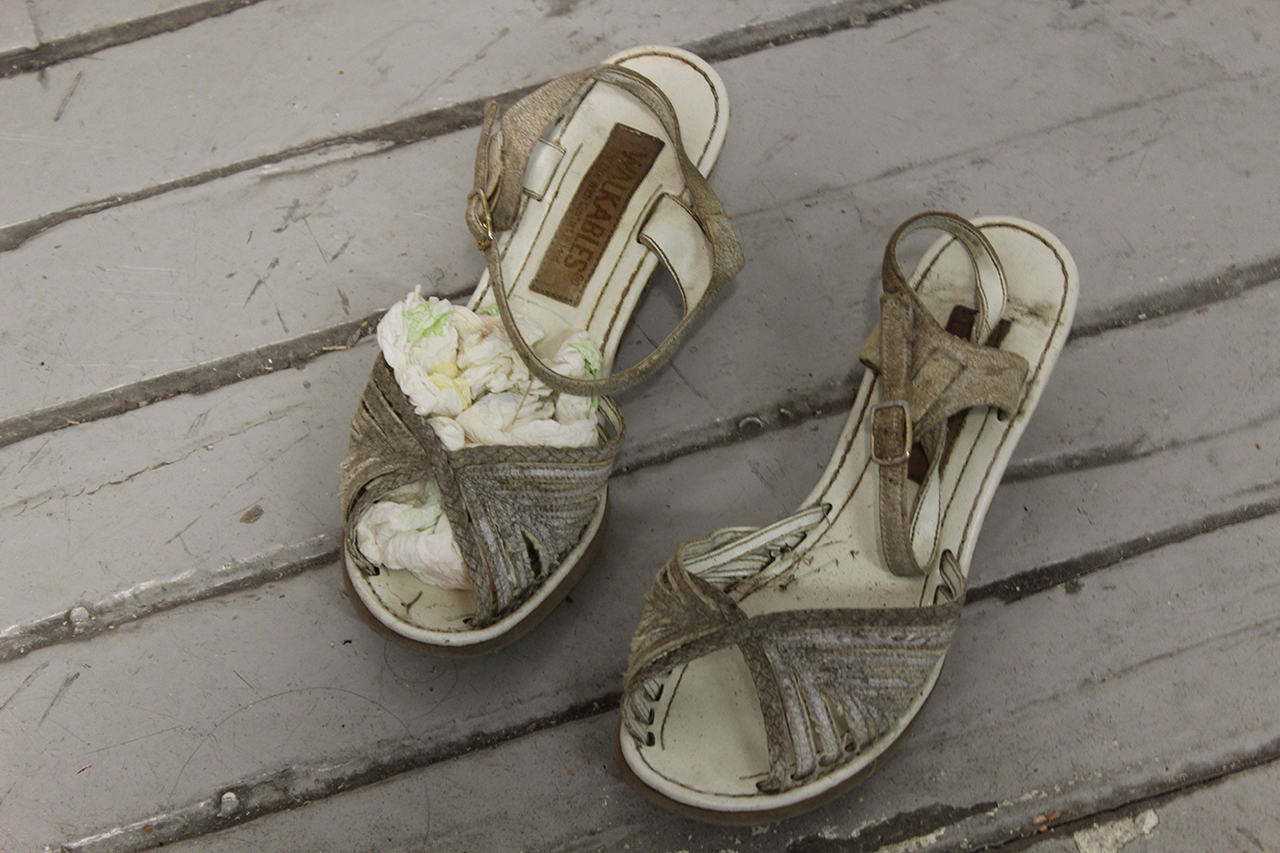 Do you shoot more with film or digitally? Do you have a preference either way?
Not really. I really like the look of film, which kind of feels like a cop out. I do really like grain. I have been making photographs since I was 14, so anything that will bring me back to that nostalgia and the tactile nature of working with that stuff. So much of my process is shooting film, scanning it, then printing it digitally. A lot of that is just a financial navigation. It’s weird to be in a place where you’re medium is guided by technology. Technology changes so fast that you are always trying to keep up with it.

Where do you gather a lot of your source material?
I find the weirdest shit in cemetery trash cans. I have been thinking about our refuse. I am starting to think about cemeteries and funerals as it parallels with capitalism. The way that we can analyze trash and as a broad way analyze culture. It is a curated cultural refuse. You find the cliched objects like booze and drug bags, and even lottery tickets in a way are cliched. You also find dead flowers and completely destroyed American flags. They get torn a part from these giant lawn mowers. I always feel weird about working with this type of imagery, like it is a little too direct or something. I just hold on to it until I feel comfortable. 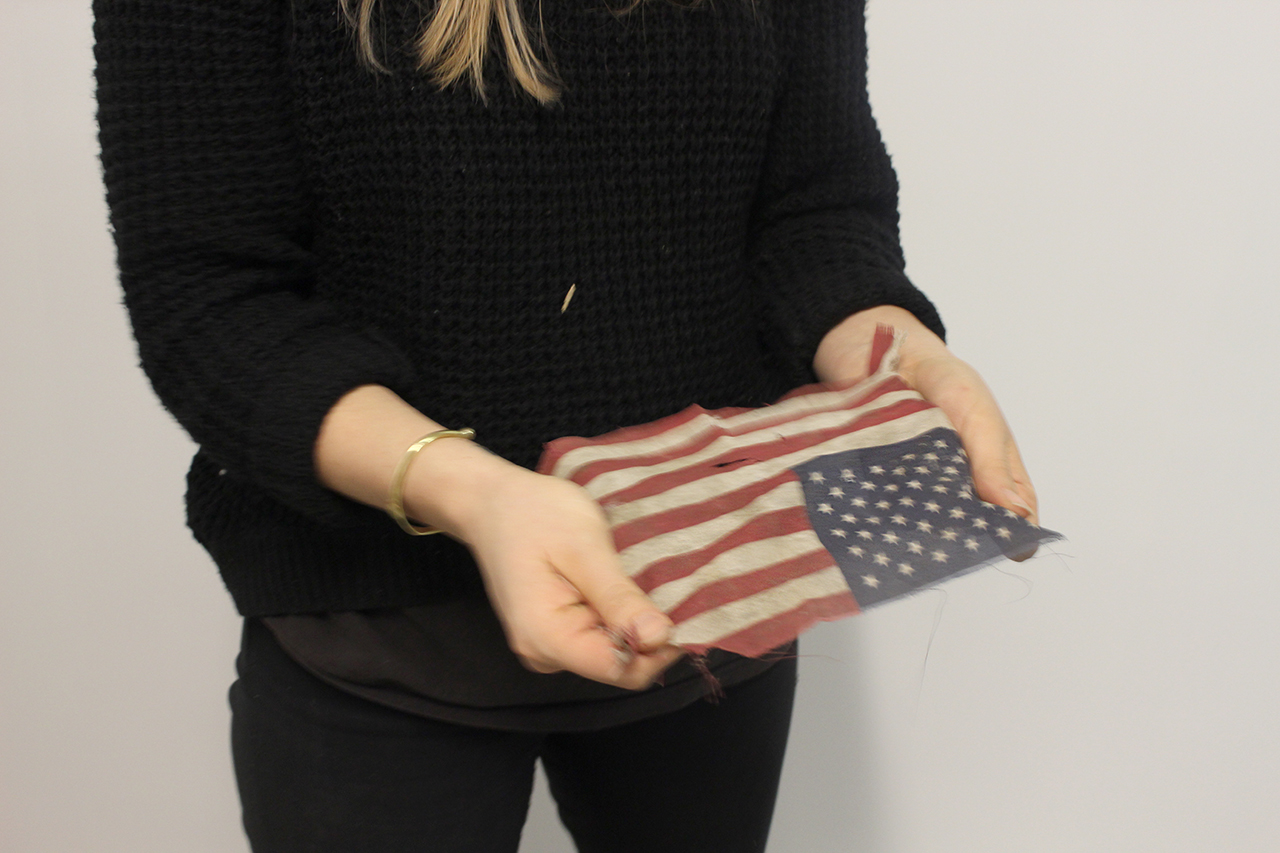 Which cemeteries do you most often visit?
I mostly look through ones in Chicago. I used to have a car, so trying to get to some of them are a little more difficult. There are some that I don’t like to go to, just because they are so old that there really isn’t any sign of life in them, like Graceland Cemetery. Those tombs are amazing, the architecture of them and the different styles and periods of them. I have always been interested in what has guided these styles and tastes throughout history. I try to visit places where there are still plots available and I often see the same people. There would be a man that was camped out facing a hill, and he would be there for hours. I love being at cemeteries. It just makes me feel really good, like I am in my element. As a kid we would be on a family trip and we would see a cemetery and I would marvel at the miniature city.