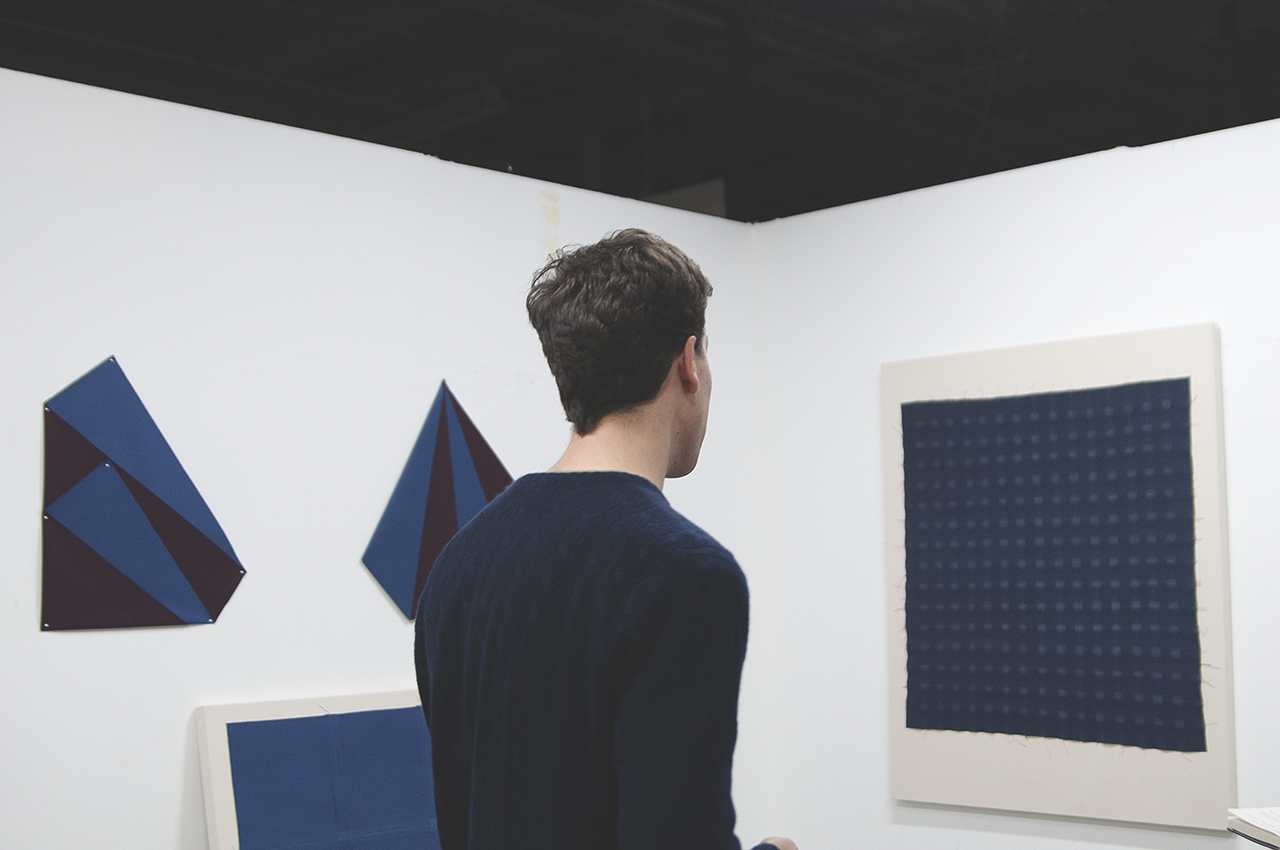 Transitioning between several mediums, Michael applies the same method of parameters and permutations to both his sound-based and visual pieces. Applying an attentive eye to the studio allows Michael to transfer the same practice to real life, in turn bringing small, everyday inspirations from the street back to his drawings and textile works.

I\W: How do your visual pieces connect to your audio work?
MM: A lot of the sound work is related to weaving and other textile systems, some of them are really accumulative, and some of them involve parameters and permutations. Sometimes I want to play with materials, and sometimes I want to stop getting my hands dirty and work on the computer. I will work on a project for a while, then I need a reprieve from it. I don’t know music theory at all and I don’t know how to play an instrument, so if I am going to make a sound piece, I want a certain number of decisions to be made for me, and then I will see what’s possible with what’s left. I am of the persuasion that the things one learns in their studio are transferrable skills to the rest of the world, or to how we are in the world. If that is the case then we should be able to take a way of working in one medium and transfer it to another and learn something across that. 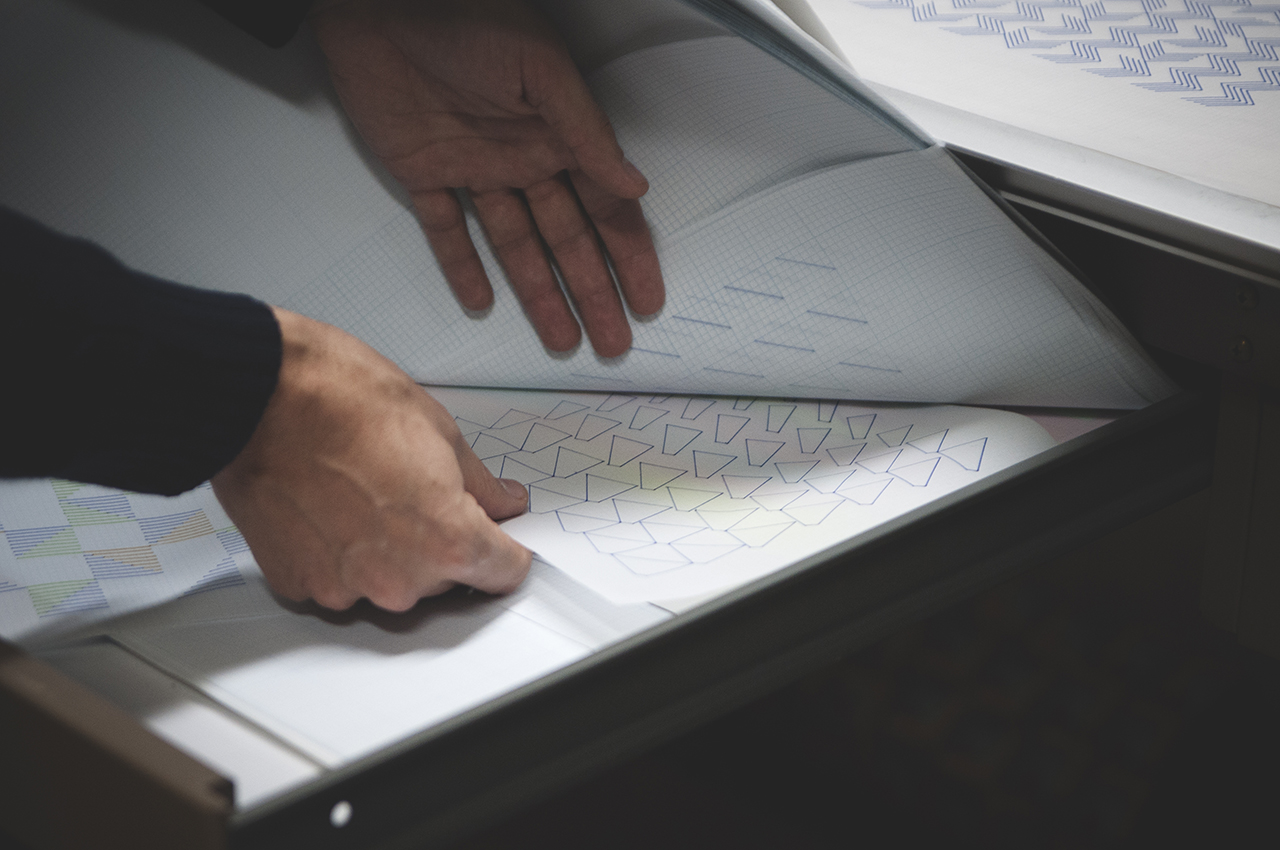 How are you discovering the note patterns that you input into your computer for each sound piece?
One of my pieces recently at Roots & Culture just took all seven notes of the C major scale and arranged them in every combination they could be played in. That piece takes around two and half hours to play out. My goal is to sit down and do the work to figure out all the permutations and then have them all in one place. They are similar to the process of weaving in the sense that design and execution are separate phases. In weaving you have to make an elaborate drawing, or draft, to decide what the outcome is going to be. You then set up the loom and sit down to weave the thing and that is just straight labor. It is a rhythm, both on the loom and your body. You are no longer making choices along the way, you already made them ahead of time—you’ve established the rules, and have to follow them all the way through. In order to not repeat yourself you have to stay conscious of what you have done and where you are going. It is not meditative or intuitive, it’s an exercise in concentration. 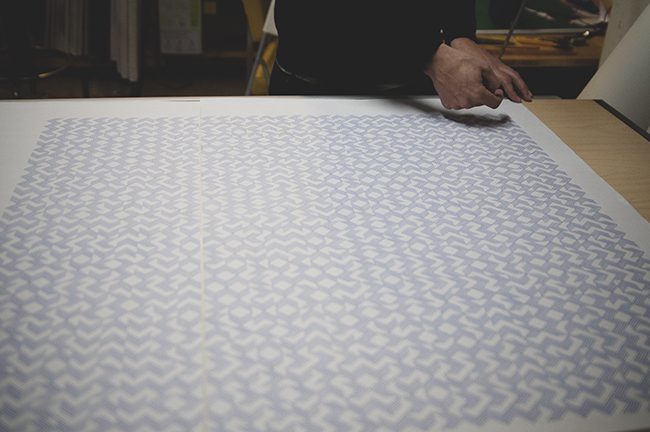 Can you tell me about the “Quadratic Studies” piece you sold as a part of the Threewalls CSA program?
I created a series of drawings of four-sided figures and then translated them into sound. The four points of the figures were each a unique set of relations that I translated into four note chords. It was a way to see what a drawing might sound like, and the piece included a drawing and a lathe-cut record. To make the record, we had to play the sound piece and drop the needle, which inscribed the sound onto a plexiglass plate in real time–creating an interesting dialogue between digital and analog. The sound file I gave the maker was lo-fi to begin with, and when translated onto the plexiglass it made the sound quality even worse. The record took this precise, clear drawing that uses practically no material and translated it into sound, a medium that seems to have even less materiality. But because it is on this really shitty record, you can’t escape the needle dragging on the surface. You are so aware of it being this really material thing. It is blown out and grainy. There are parts where that fuzz overwhelms the sound and dominates the piece. 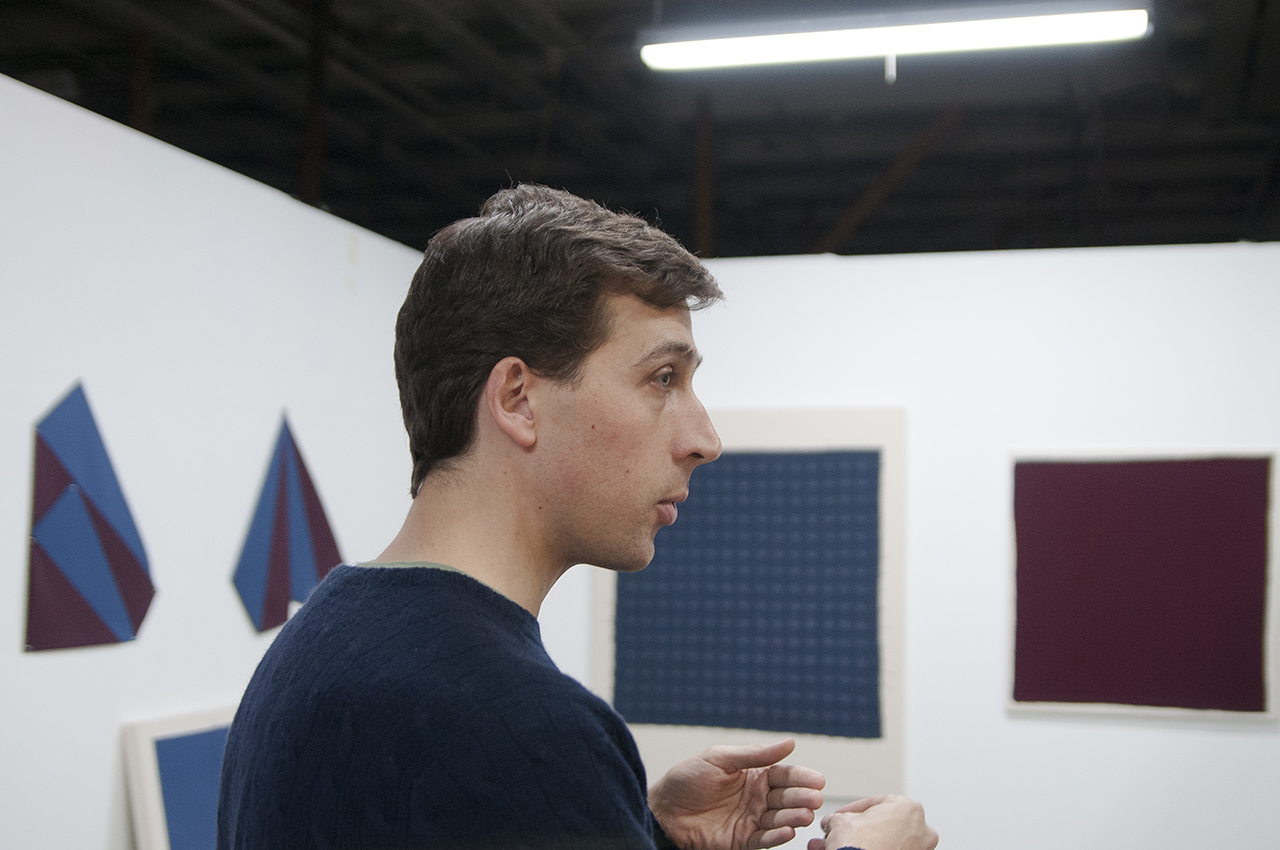 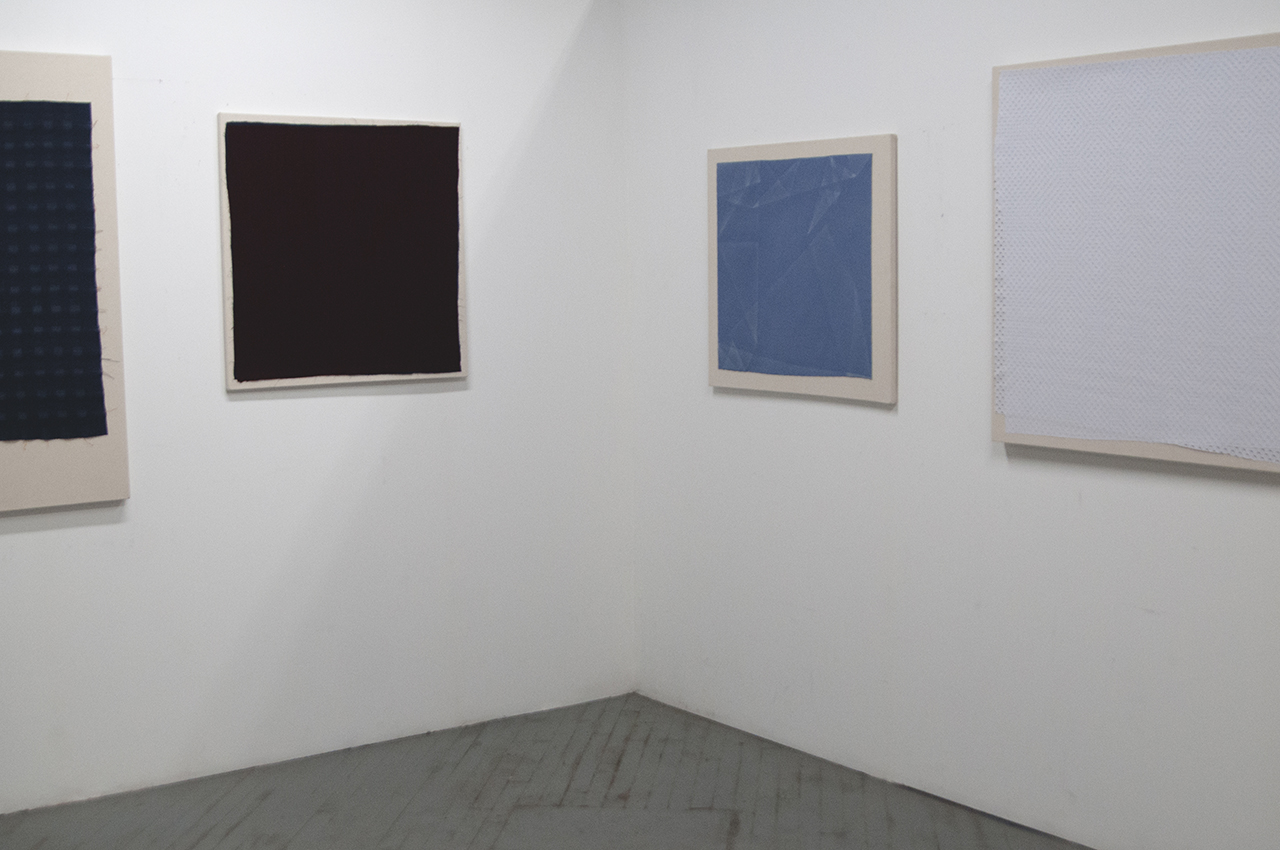 Have you thought about trying to translate a piece of music into a drawing?
Woah.

Are you working on your drawings simultaneously with your material-based work?
I was drawing lots of influence from quilts to get basic shapes that I could manipulate and transform because they are great examples of how to tessellate a plane and how to fit shapes together to make a continuous surface. I could take these building blocks and do other things with them. They could be designs for some pretty great drawings, but then as I began to digest this material, I became increasingly interested in the physical construction of quilts. The more recent works that were at Devening Projects began to pull apart the constituent processes of quilting–such as cutting, piecing, pressing, stitching, etcetera–and re-combine them in ways that prioritize their visuality.

What is your purpose of leaving the frayed edges on your pieces?
Part of what I think I’m doing is acknowledging materials and what they do. I could make them perfectly clean and precise edges, but that would turn them into paper or paint or another material. It would ignore the fact that they are cloth.

Why do you tend to focus on dark colors of a similar palette like navy blues and burgundies?
Color is nearly always secondary; in other words, I primarily use color to clarify structural aspects of the work, to reveal how something is made. Some of my pieces are created out of fabric I just had laying around, not specifically chosen for each piece. During a studio visit, a friend said that I used a very generous palette. She suggested that the colors left a lot of space for the viewer, and were not pushy in their presentation. I thought that was a nice relationship to have with your viewer, to give them space and not beat them over the head with an aspect of your work. In some ways I don’t want to get too fussy with color choices.

Is there a central focus to your drawings, material-based works, and sound pieces?
Each one is surely coming from their own set of concerns. I sometimes don’t think I am very observant in the world, but I try to be in the studio, if that makes sense. I am trying to develop skills to be more acutely aware, and I think art is a great place to do that. I am good friends with Jessica Labatte and her work consistently makes me look at the world in new and fresh ways. She was producing all of these constructed still lives out of the detritus she found on the street, making me more aware of those materials and more observant in general. This is part of the reason I have been working with cloth lately. It is one of the oldest technologies and still one of the most ubiquitous. I am looking for small quotidian moments like the pattern of a jacket, the seam, fold, or drape of a shirt to inform what I do in the studio. Maybe there is a way to be very attentive to simple things in the studio in the hope that it translates to how I engage the rest of the world. 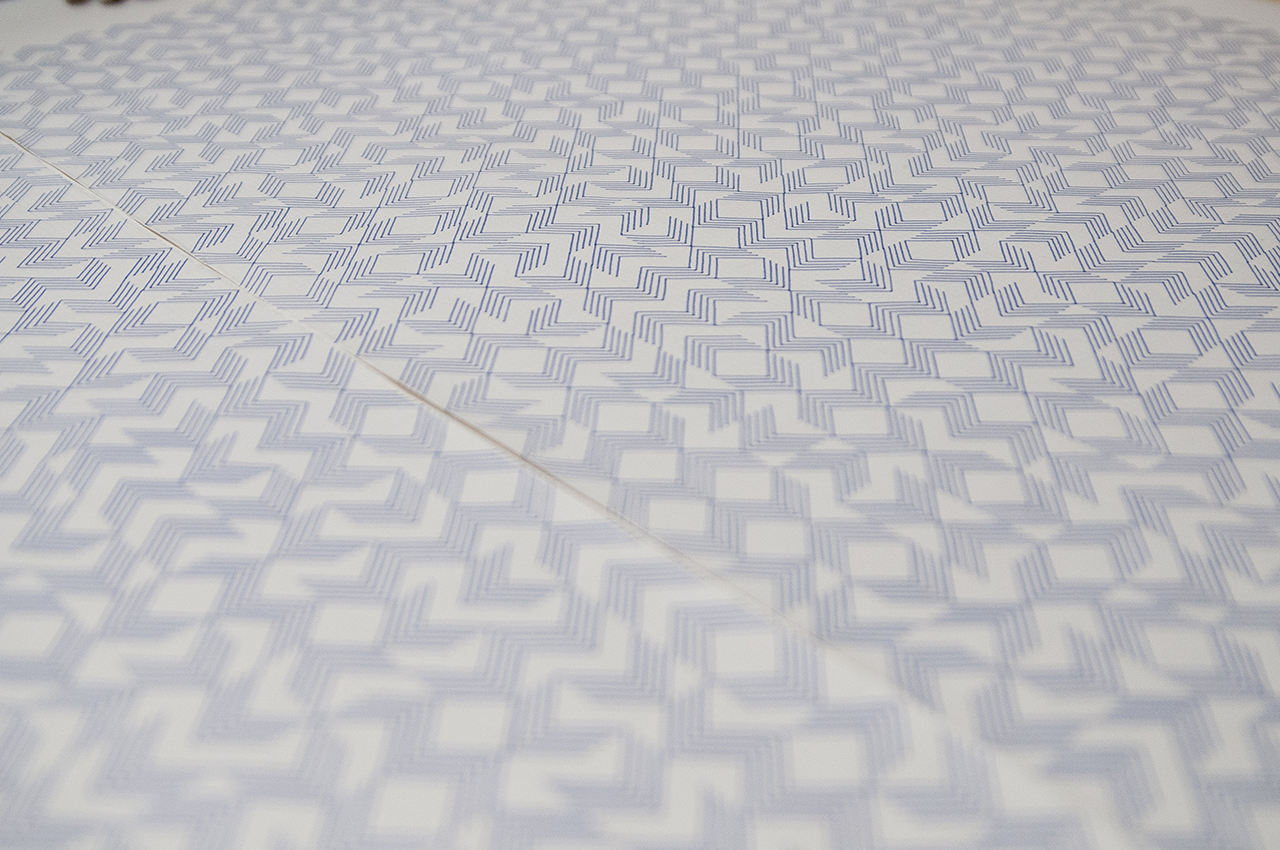