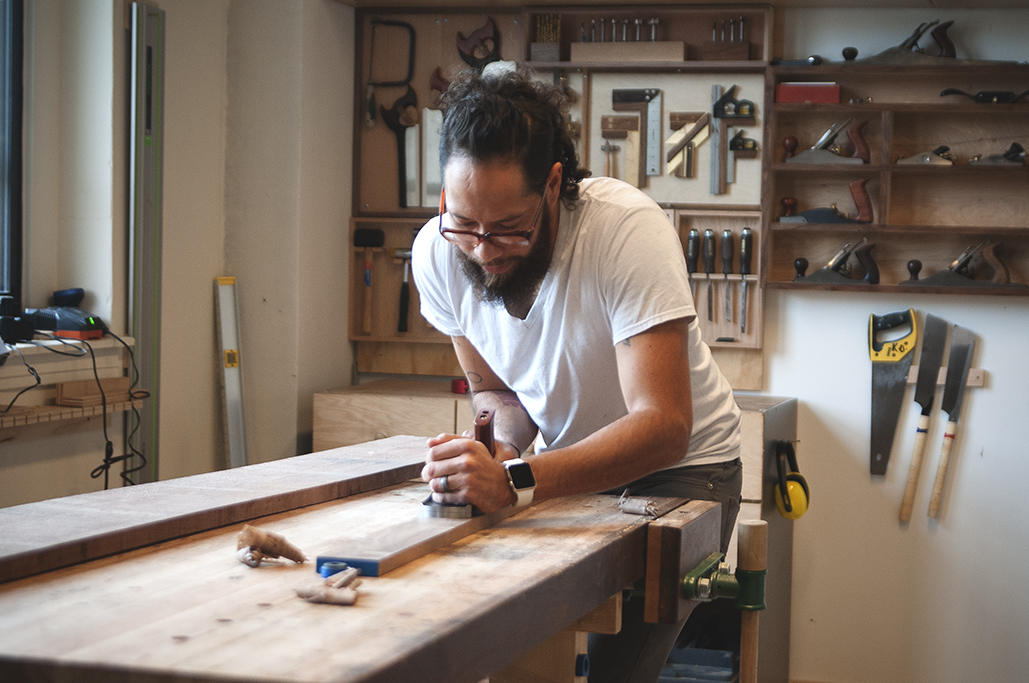 Nate’s work observes his family lineage, detailing the fissures found in his grandmother’s stories about his great-grandfather. Excavating these familial histories connects his practice to the gaps found in larger, related histories, presenting these connections as immersive installations that utilize sound, absence of light, and sculpture to project a narrative void. In his sculpture and performance he often obscures fact, forcing the audience to experience these stories through his own murky translation.

I\W: Your works on paper have previously been based on your father’s ideas and drawings. More recently you have reached further back in your lineage, referencing stories that surround your great-grandfather. Can you talk about how that familial pivot has influenced your work?
NY: I was thinking about horse racing and my great-grandfather before I even started this other work that surrounds the ideas of my father. I knew there was something that could potentially become a body of work, but I had no clue how to approach that until recently. I was remembering stories that my grandmother told me about her father, and decided to use my memories to create a text that describes my own recounting of her recollections. I use this text as a performance that describes black jockeys, migration, a Freemason ring of my great-grandfather’s that helped him escape from jail, and other familial stories told to me by my grandmother. I’ve performed it as a lecture at the Depaul Museum of Art, as a well as during my recent exhibitions at Monique Meloche Gallery and the Richmond Visual Arts Center. 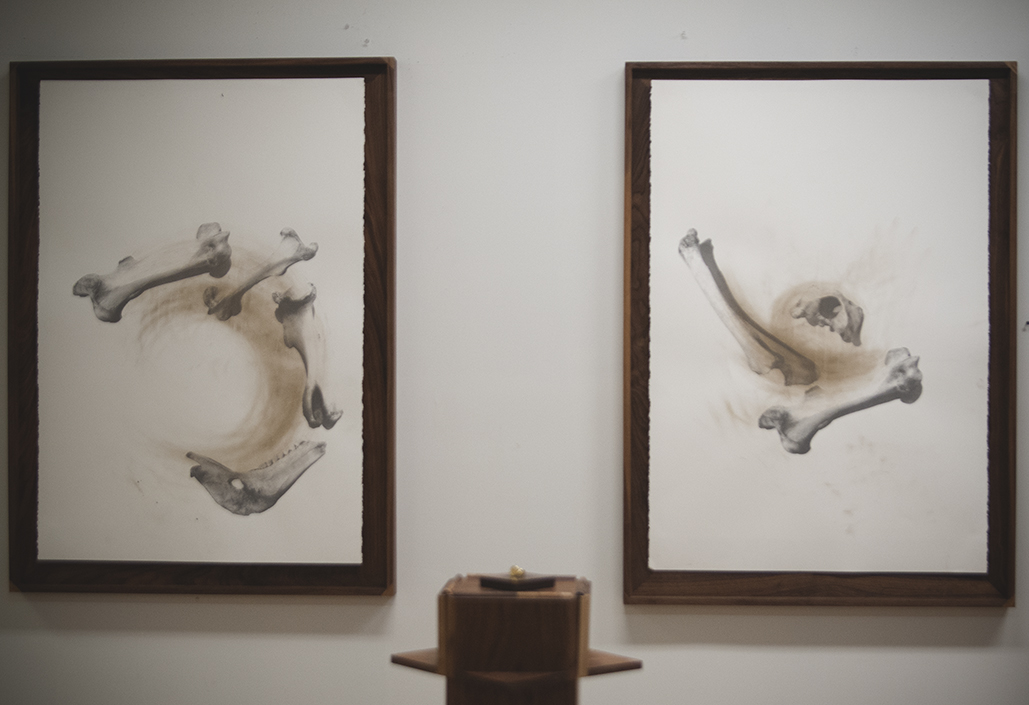 What are some some of the main points that join these narratives?
One of the main overlap points for me is the idea of a void. My grandmother didn’t know much about my great-grandfather because he left the south under some sort of duress. She thinks that he changed his name when he arrived in the north, and that he might have had another family in his previous identity. I wanted to think about that space. I wanted to think about the void of my great-grandfather’s identity between him leaving (an identity) and arriving (a new identity). He had a name, and then he had another name, but between those titles there might have been a nothing. It was was like this non-existent space that he traveled through. I had always thought of the previous body of work as having to do with empty spaces that had the potential to carry meaning. The diagrams devoid of text were like vehicles for the projection of something specific, so my work is always about that kind of potential in absence. 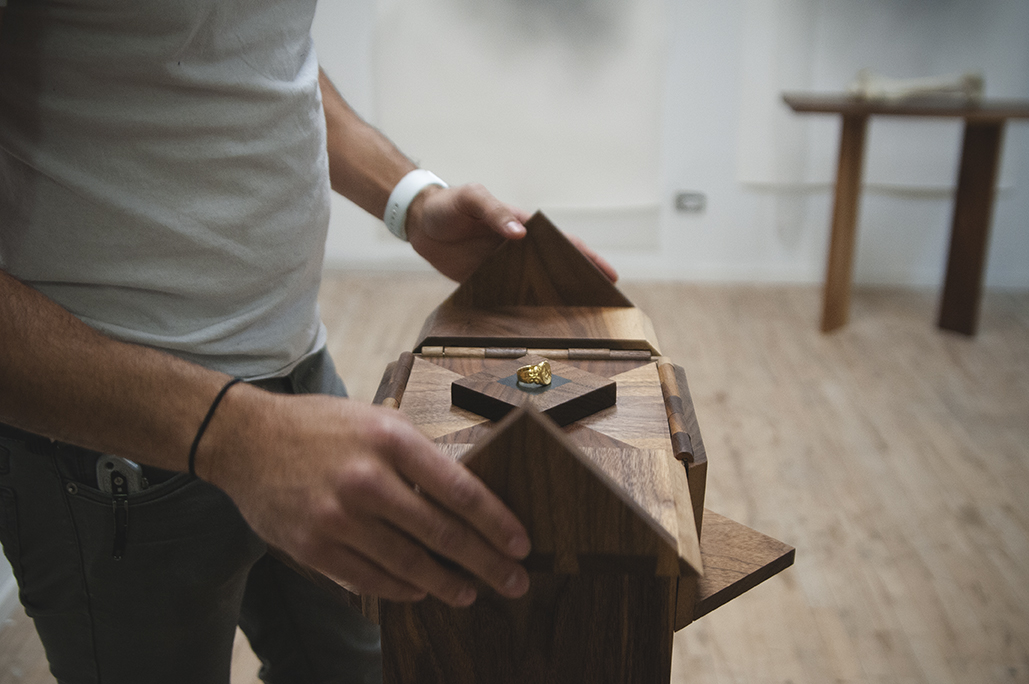 How has observing that void influenced recent installations/exhibitions?
My exhibition (re)collection at the Visual Arts Center of Richmond, Virginia was a good pivot point for me into some newer work. I took one of the three rooms in the gallery and blacked it out completely. I covered the walls and ceiling with black fabric to seal out the light. In the space you couldn’t even see your hand in front of your face, but you could hear a sound. The sound was rattling and dropping horse bones. When you heard the bones hit the ground, a tight spotlight flashed on, illuminating a random scattering of bones on the floor. There were several collections of bones randomly around the room and each flash would illuminate one of these. You only actually saw the bones for a split second. What you saw for a longer period of time was the after image. The sound also moved through the room directing you toward the event of the light. It was an easy event to miss, nonetheless, since it happened so fast.  I wanted there to be the possibility that the viewer didn’t really see the objects, not in its entirety at least. Intentionally I wanted them to experience the absence that is present in the work. 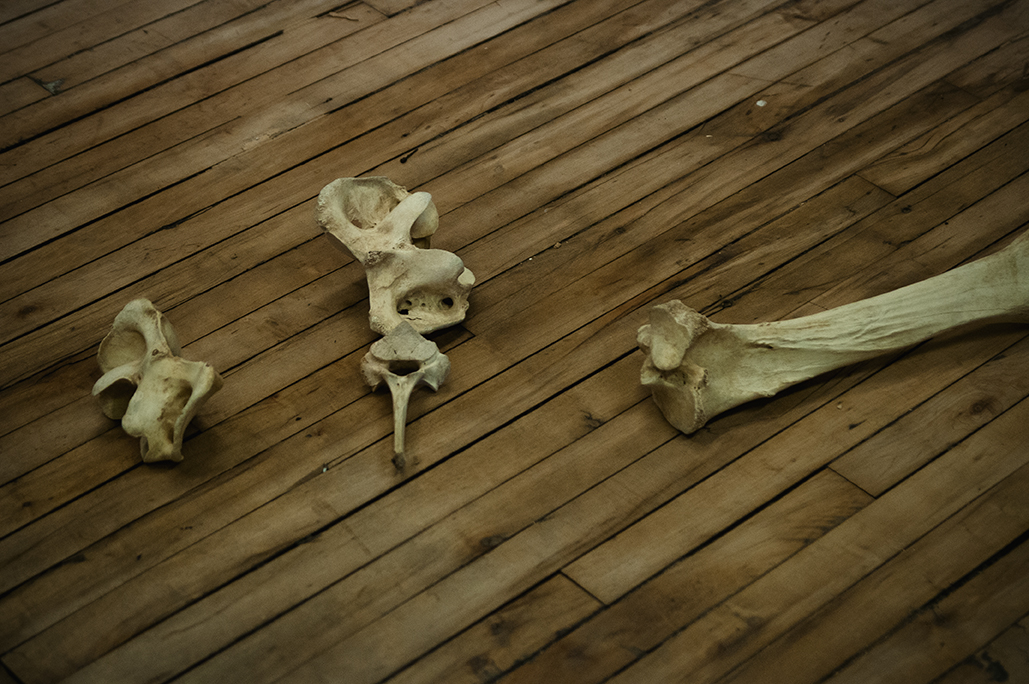 Can you explain the origin of the bones and how they tie into the narrative of your great-grandfather?
I kind of prefer to answer that question by not answering it sometimes. Part of the reason for that is because it actually gets answered in the work. That being said, I do have multiple ways of addressing that question when it comes up. One answer is just that I found them. They are part of a larger narrative which includes a story about my great-grandfather’s migration from the south to the north in the early 1900s. They are horse bones, and the horse was the vehicle that carried him on his journey. Other times when I’m asked where the bones come from, I answer that I dug them up. Which is also true without getting into the details. I think that’s enough about that for now… 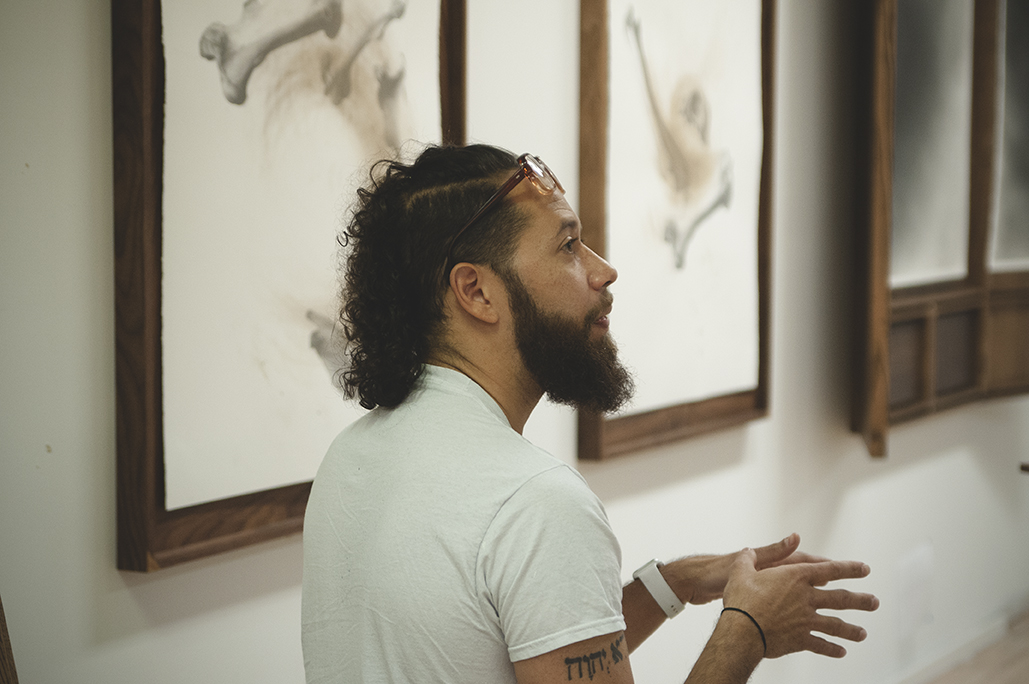 Why are many of your new gestural drawings created from dirt?
When I was in Richmond for (re)collection, I wanted to make some images of the bones as a first attempt to articulate them. I wanted to mimic this gesture of cleromancy or casting. As I was exploring the city, I struck up conversation with local people to try and learn about its history. This story struck me: In the early 1900s the city was building a train tunnel to go through the hill so they didn’t have to go all the way around the city. This was a train that was going from further south all the way to Ohio. While working, the tunnel collapsed in the hill and the workers were stuck down there. Depending on who I talked to, some people said there were three or four workers who were trapped who were all black men. Other people told me there was an entire train car (which was the segregated black train car) was stuck in the tunnel. The city couldn’t get the people (either workers or train riders) out, so they sealed the tunnel. It became a grave.

To create the drawings for my exhibition, I went to the site of the tunnel and collected dirt to make the drawings. It made sense to me also in thinking about my great-grandfather because of that void, that loss of identity between two names and places. These were most likely people coming from further south to the north, essentially in a similar process of disappearing. 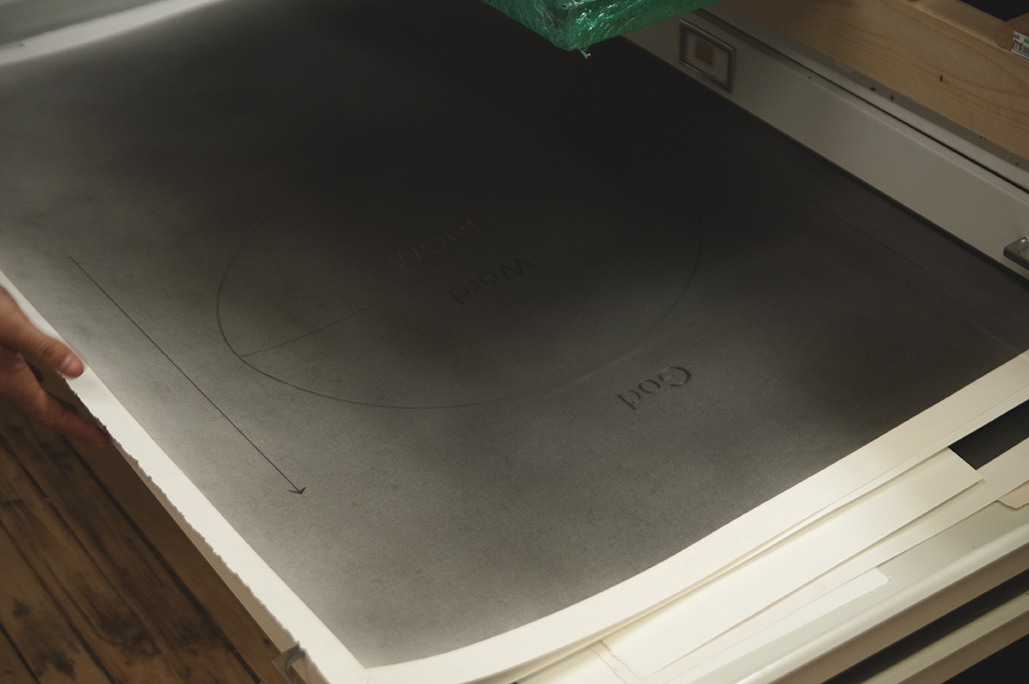 Why did you choose to create such hyperrealistic depictions of the bones when you had been previously been drawing such abstract, atmospheric drawings?
I had been sitting with the bones for awhile, and at first the drawing was just a way to exercise and think. Then I realized that maybe the drawing was another way to create a certain amount of removal of access to the image, just through my own representation. The drawings are not the actual bones, they are my representation translated through my body,memory, and sight. 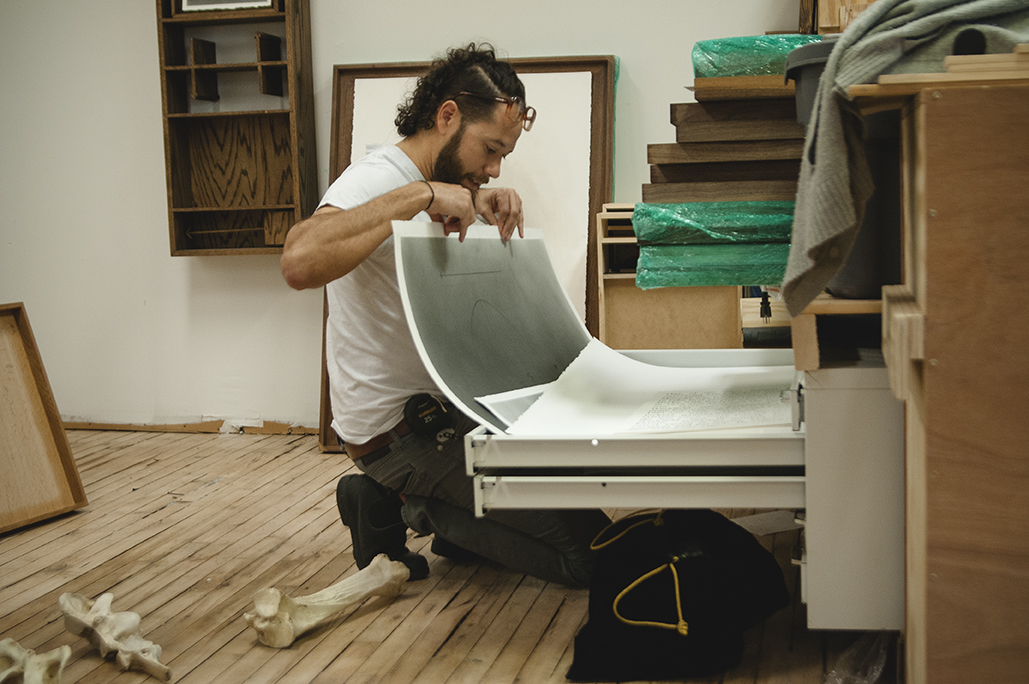 Why did you decide to incorporate text in recent drawings?
I thought that in order to understand what I was really trying to get to, there needed to be some context. For example, the mason ring I made without the context of the story about my great-grandfather, is just a ring. It has masonry imbedded as a cultural narrative, which is something important to the work as it pertains to secret society or mysteriousness, but there is a part of it that is actually related to my memory of understanding someone else’s memory (my grandmother recalling the story of her father) of someone else’s memory (my great-grandfather’s memory of the event). All of this might throw doubt on the factuality of the narrative and let us think about how we understand translation. I wanted to slowly create that context. I wanted to give it and withhold it at the same time. So some of that text is my handwriting. Handwriting is always so personal that it can be difficult to read. It is small, so you have to get real close. The other text is printed on a piece of glass that is reflective and then it is given a matte black coat, so it is black on black. Because the text is actually the part that is reflective, it makes it difficult to read. All of these things are to slow down the reading and create a consciousness of the act of meaning making.

I always thought that the drawings needed something to give them body. But, at a certain point I made some frames that didn’t even have paper. I just started engraving everything I wanted to see directly into the wood.

I am curious about the woodwork. I feel like these drawings could exist on their own, but you create such elaborate frames to place the work inside.
It is a weird thing that happened over time. I became a lot less invested in the drawing, and became much more invested in the frame as a sculptural object. The material (wood) for the “frames” (red oak) was at first a reference to an object which was a church pew. I wanted them to feel a little bit like church. Then there was a moment where I decided to actually go further back to the triptych painting. It’s a different kind of church reference than the other, but to me the weight of the object also carried an authority. And then even in some of the more recent ones, the drawings happen right in the wood. It is hard for me to make paper stand on its own or have that authoritative weight. I always thought that the drawings needed something to give them body. But, at a certain point I made some frames that didn’t even have paper. I just started engraving everything I wanted to see directly into the wood. 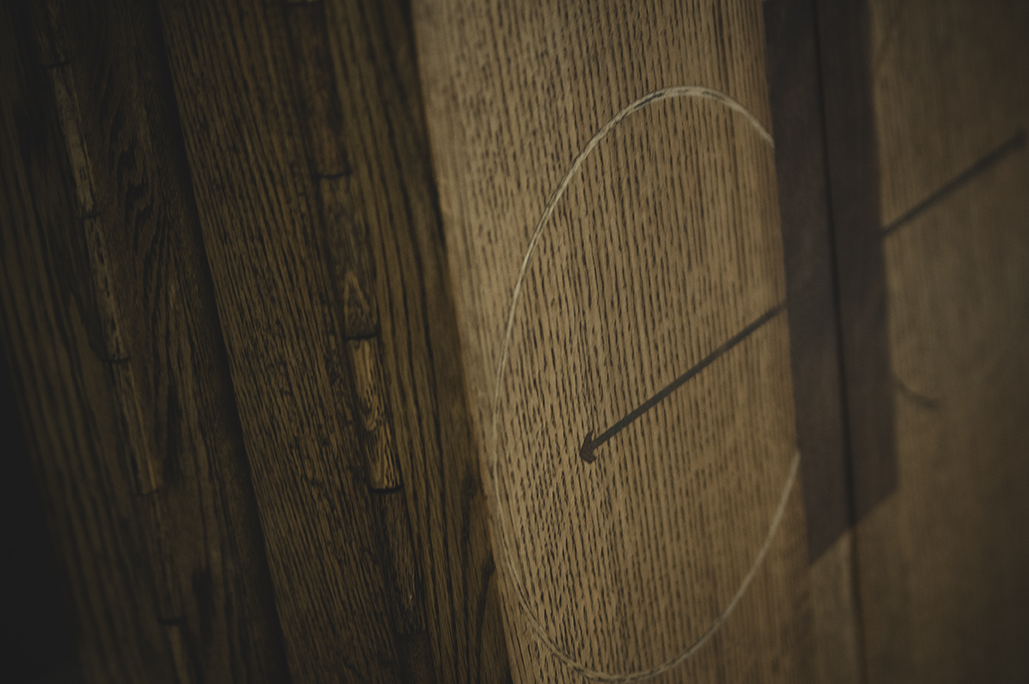 What other projects are you focused on in your studio?
Right now I’m working on holograms. In the works you see the bones, but only a faint representation of them. It kind of looks like the bones are floating in space. I’m thinking about adding a sound element to these, and trying to get them to be less static objects. I think I’ve only skimmed the surface of this new body of work, and I’m excited to iterate. That being said, some days I just wanna indulge in the labor of furniture making.