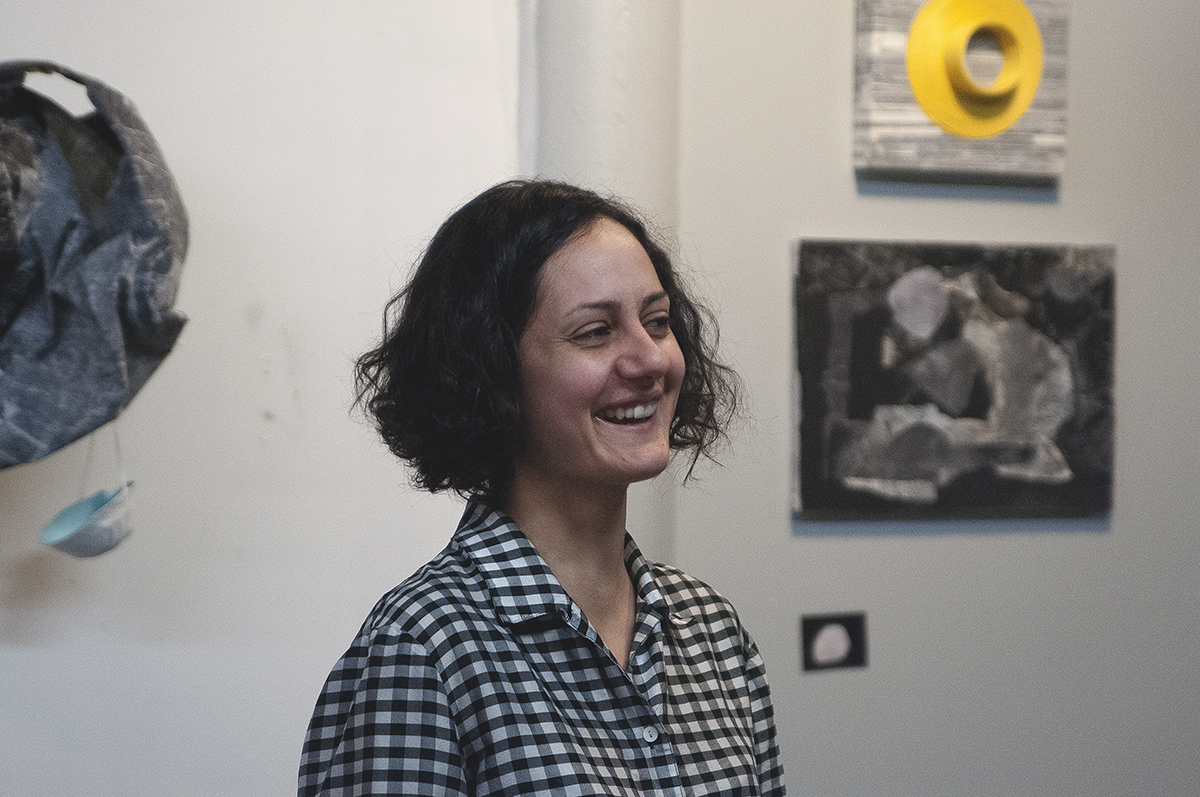 Nazafarin has always been interested in the horizon and what lays just beyond its perceived edge. After exploring the subject conceptually with painting, she has moved her interest to sculpture, exploring horizon and landscape physically through her work with paper maché molds. Her hollow works reveal deep interiors that she imagines could be lived in and used, rather than just serve as objects to be observed. Nazafarin develops these interiors just as much as the sculptures’ exterior surfaces, using the inner cavity to think about both the inner body and core of the earth.

How does your work with discarded objects examine ways of looking?
I didn’t have a studio for about six months when I first moved to Hyde Park, so I had to work at home. I became interested in working with what was available, particularly in my recycling bin. The idea of taking something that was meant to be functional and useful and then doing something to it, transforming it in a way, was attractive. For example, I wrapped many everyday objects like wine bottles, jars, or food containers with cotton strings, first individually, then in groups. Wrapping the objects with a continuous string was similar to a careful scanning of the form and the material, and of course it was also about abstraction and removal of the object from its initial context. I also go for a lot of walks, and am interested in looking for the kinds of things people leave behind, like trash. I would bring materials to the studio from the streets and work with them. Collecting objects requires an intentional looking and an engagement with the environment. Later, I started casting these objects in paper maché, and then assembling them to create larger forms. 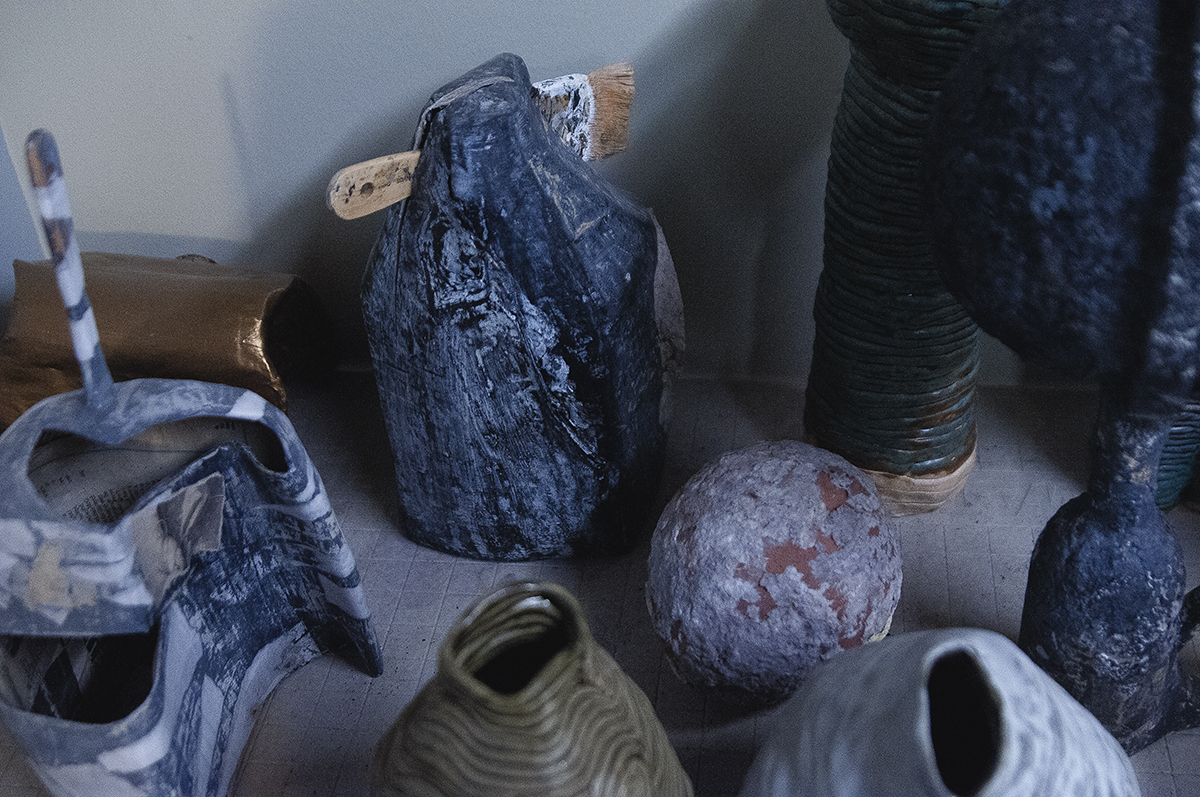 How are you focusing on the empty space that is created through these paper maché casts?
I like to think like a potter (I am an amateur potter). You form the clay, but the object is about the empty space inside—the space that is supposed to hold the water in a jug. So, my work is about the interior spaces of my objects and sculptures, which are often inaccessible. I also make paintings, and painting is about creating (the illusion of) space on a surface. My paintings emphasize the conflicts and interactions between flatness and depth. When I started working with sculpture, I immediately learned that it was about the physical space, which was new and exciting to me. The interior spaces of the sculptures were mysterious because I didn’t know them. They didn’t exist on flat canvases. My attitude towards creating depth and space in painting was conceptual and not physical. So, I knew I wanted to work in sculpture to focus on the space inside.

What does the exploration of cutting apart these vessels reveal?
The paper maché vessels started with this idea that I had to capture the shape of air, which was supposed to be humorous too. I was flying from Iran to the US and we had some very bad turbulence and I found myself grabbing the air in order to hold on to something in case we go down. It was scary. But then that got me thinking about how to capture or formalize the air in a way that wasn’t like Duchamp’s Paris air. I wanted to find my own way of doing it. When I came back to the studio I had these plastic shopping bags and I inflated them with my breath and began to cover them with paper maché and made some molds. Then those grew and became the sculptures that I am working on now. I cut them open and collage them to generate new forms. Maybe one reason is that I like to work with fragments, then put them together to create something unexpected or new. The process of making and working with my hands is very important to me. It’s similar to the thinking process. I don’t plan out the exact shape, but allow the objects to naturally progress as I work on them. I always go back to older pieces and cut them or change them to something new. And the objects reveal that history, labor, and touch on their surface. 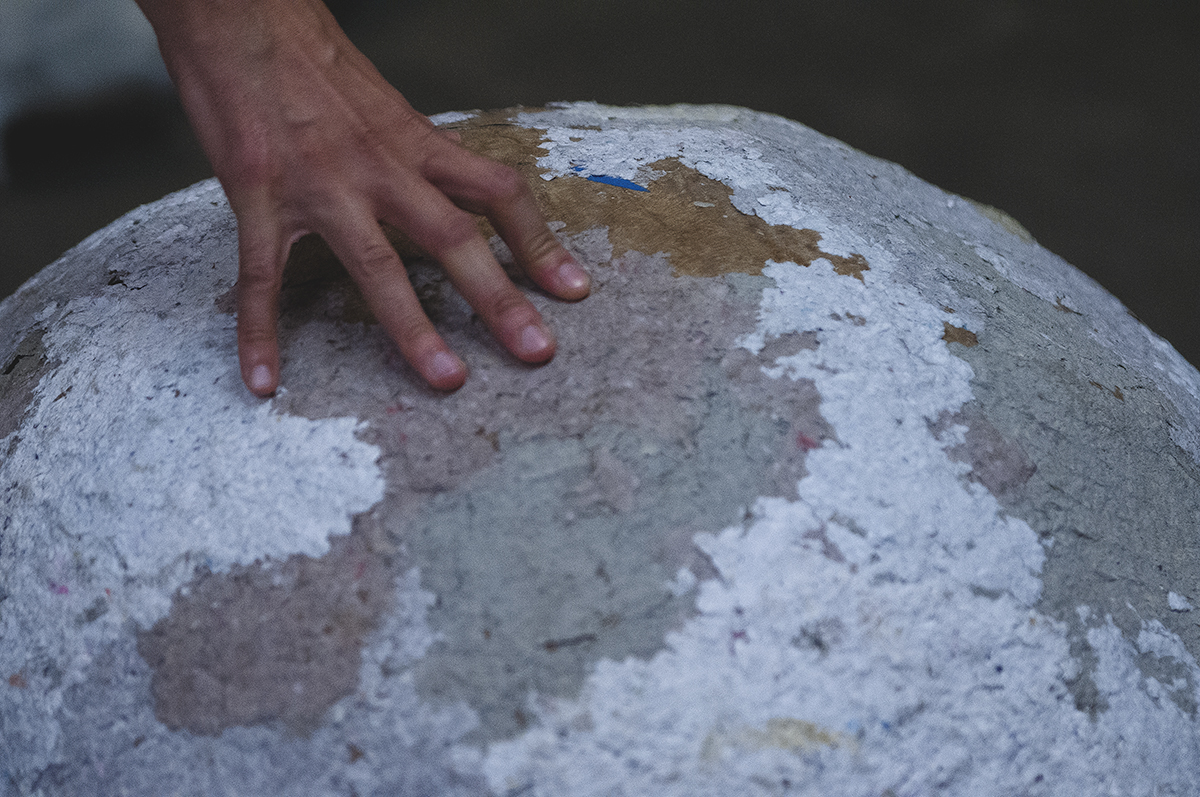 Was part of the concept of these pieces to focus on the air inside being your own breath?
It was. With the interior spaces I think about the inner space of the body, the space inside the lungs, and also the inner landscape of the earth. I visited a cave over the winter and these wall pieces that I’m working on now come from that experience. We had to crawl under the rocks and it was 15-20 minutes of very claustrophobic experience. Then we got to a dome that was so beautiful. It was very open and very dark. Being there was an amazing experience—in the absolute darkness and absolute silence. I was always interested in openings in the earth, in what they had to reveal, and how they had influenced humans’ perception of shelter, interiority, and homemaking. I like to compare the cave to the studio, and while in the cave I thought about those Paleolithic painters and how they worked or lived in these places. What they dreamed of. Not all artists work alone, but some do. I work alone and I like being alone in the studio. Both the studio and the cave are places to rest. They are shelters, and their scale relates to our bodies.

The process of making and working with my hands is very important to me. It’s similar to the thinking process. I don’t plan out the exact shape, but allow the objects to naturally progress as I work on them.

How does the sculpture you were pushing through Washington Square Park, as a part of your project Temporary Public Art, relate to the rest of your work?
There are no openings on that sculpture, but it is a continuation of the vessels. It is hollow inside but much larger than other objects that I made. When it was done, it immediately looked like an object with a lot of potential for movement. That’s why I took it out of the studio and started rolling it on the streets and carrying it through different spaces in my neighborhood. 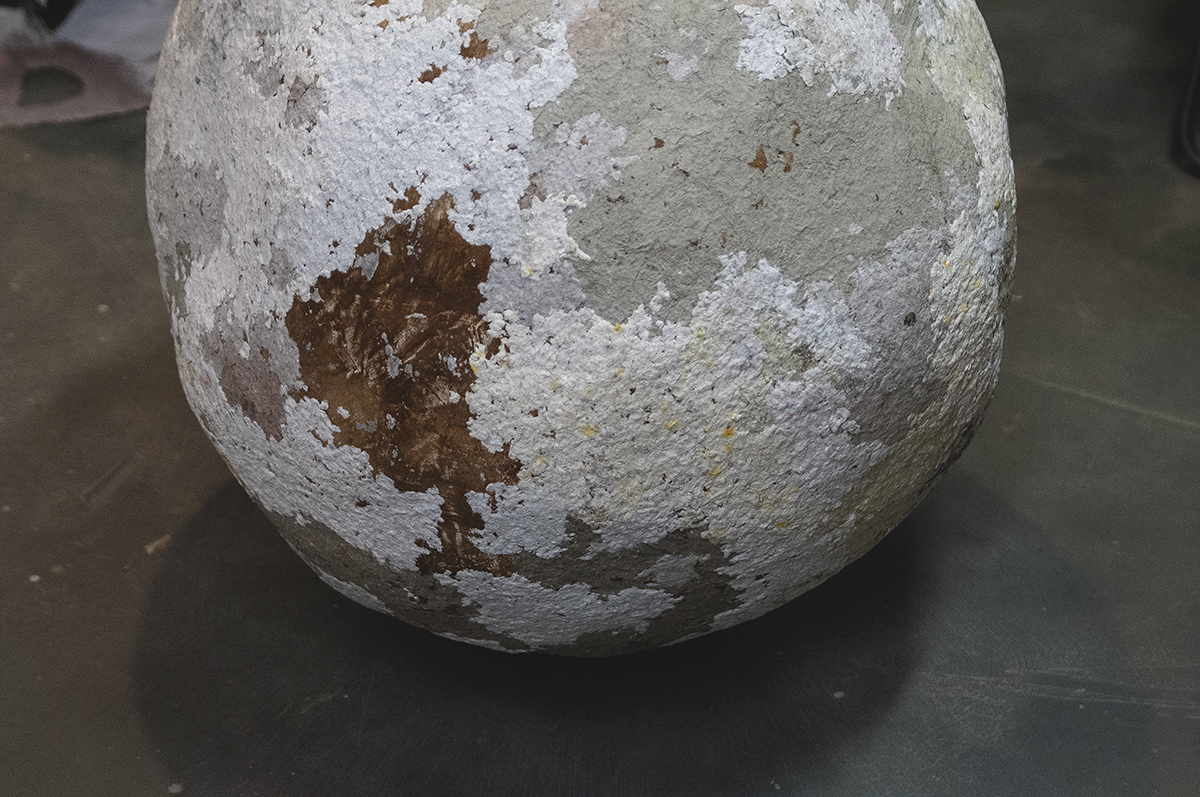 Because it is not completely round, it seems to have a mind of its own, stopping and starting seemingly at its own will.
Yes, and it is a playful object. I took these larger “social” sculptures out of my studio when I was at the Arts Incubator at Washington Park. I was interested in interacting with the objects in the public spaces of the park in order to activate them. I asked strangers to help me to carry the big boulder-like sculptures across the street and then across the park. And since I was doing something that you don’t see people do that often, which is carrying an awkwardly shaped huge thing in the middle of the street, people were curious and interested in talking to me and helping me. I wanted to use the object as a vehicle to get people to walk with me from one side of the park to the other, which are very different neighborhoods. When participants would lift the object they’d realized it wasn’t heavy and that I really didn’t need their help so then they would start asking questions and we would talk. It was during the election campaigns, and that prompted a constant conversation—typically about Trump, climate change, and the presidential debates. 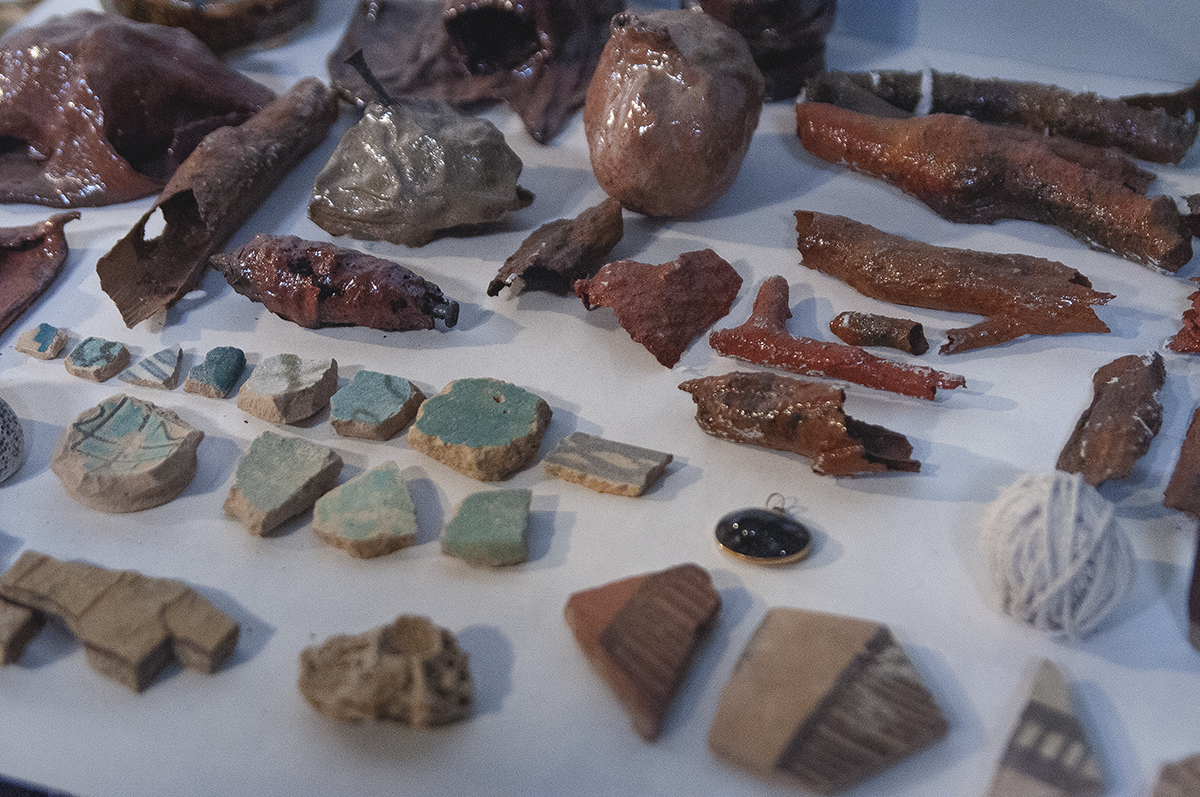 How does this tie in to interests you have about objects collecting memory through their use and markings?
You can see the emphasis on texture in most of my work. I think surfaces of the objects are similar to the skin of the body. My friend Laura Letinsky talks about scars on the body as markers of memory, maybe memories of crashes or cuts, not pleasant memories but these traces are the history of our bodies. My objects are also rich with traces of what they’ve been through and how they’ve been made. The objects that left the studio reveal the history of their contacts with hard surfaces of the asphalt in their cracks. They’ve also collected residues from the streets. Same with the discarded objects that we already discussed, they are also residues or traces of daily life— markers of history, personal or found. 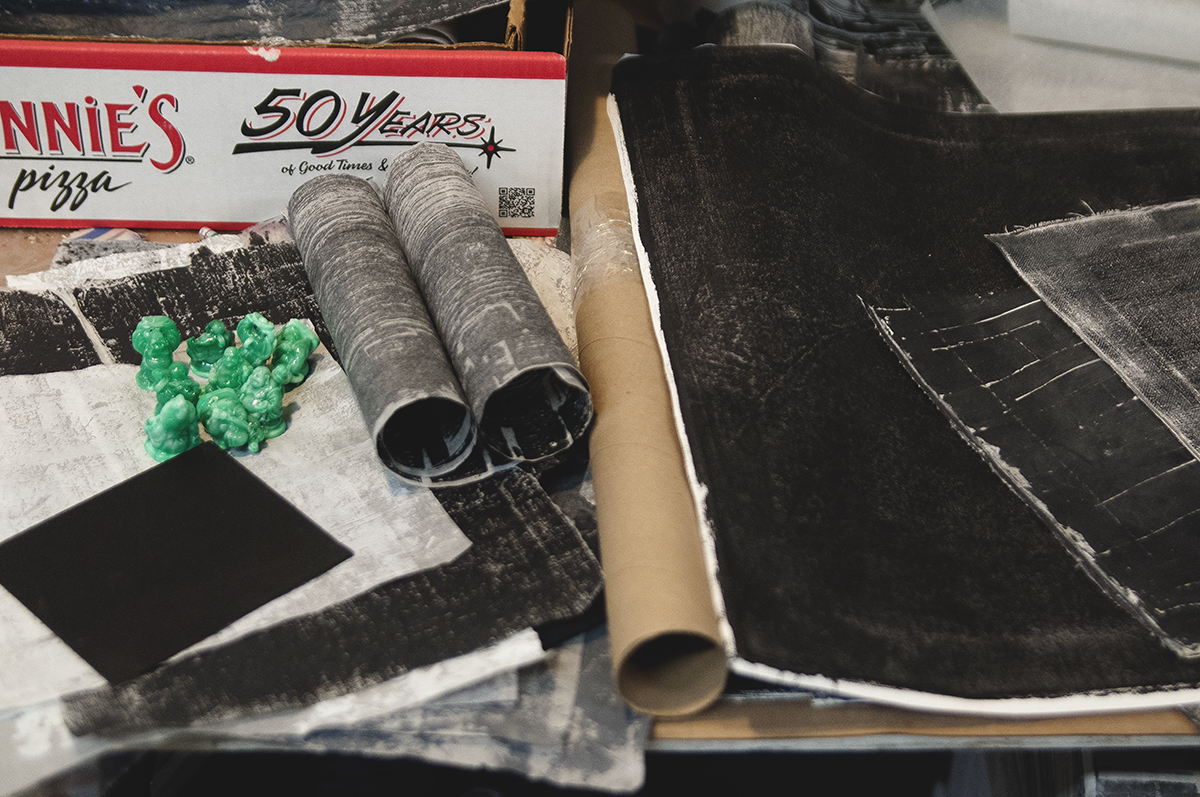 Are you collecting both manmade and natural objects? How are they being combined in your work?
I don’t like to hold one over the other. I go for whatever attracts me, but rock-collecting is in my family. In family trips to the outdoors, my mom liked to collect things, typically rocks or pieces of pottery. She would make inventories for them. Everytime I visit now she has something for me with a small piece of paper that says where it comes from. I share that nostalgia for places that I’ve been. Recently, I’ve been collecting and using these small resin Buddha statues in my work. There is a souvenir shop by the train station, and every time I walk by, I pick up a Buddha or something else. I started collecting them because I was referencing David Hammon’s piece, Praying to Safety, that was at the MCA.

Can you talk about how working in 2D transitioned into sculpture for you?
There were many different reasons involved in that transition. One important one was that I wanted to work with something that I could hold in my hands and something that would take up space. I stopped painting to make sculptures and then after a few years returned to it because I missed the frame of painting, as well as its intimacy and immediacy.

How do you go about adding texture and pigment to your paper maché sculptures after they are formed?
Let me start with the forms. The forms all come from casting objects in the studio. In a way, they come from the physical reality that I am surrounded with and that is very important. When I’m close to be done with the form, I paint it to be able to see it better and then if needed, I cut or add to it. Besides painting the surfaces, I use paper pulps, and also collage my drawings onto them. The whole process is very intuitive and is not particularly a linear one. There are is lot of back and forth involved. 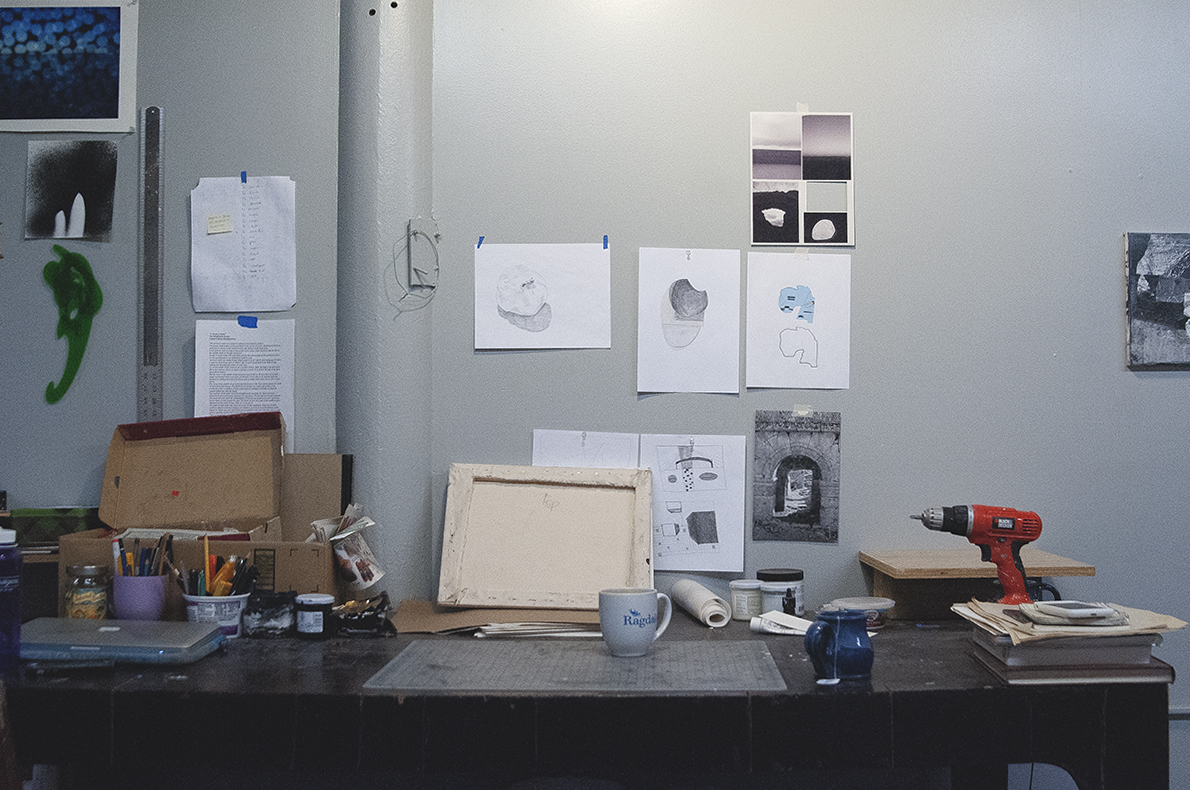 How do your newest sculptures express landscape?
Landscape is the space for lived experience and I’m thinking about it in relationship to my work since I did the project in the park. I consider my sculptures as places that could be lived in. The holes and the openings on the objects invite the viewer to look into them and I want that engagement with the object versus just looking at them. The sculptures have an internal horizon line that is not accessible, but is imaginable. I like the horizon line because it touches both the land and the sky. It is the limit of what you can see, but just the beginning for everything else. I grew up surrounded by the mountains. My window faced the mountains and I always had this desire to know what lay behind them. I am still interested in that. I am moving to Tucson which is surrounded by the mountains and I am curious to know how that is going to come back to my practice.