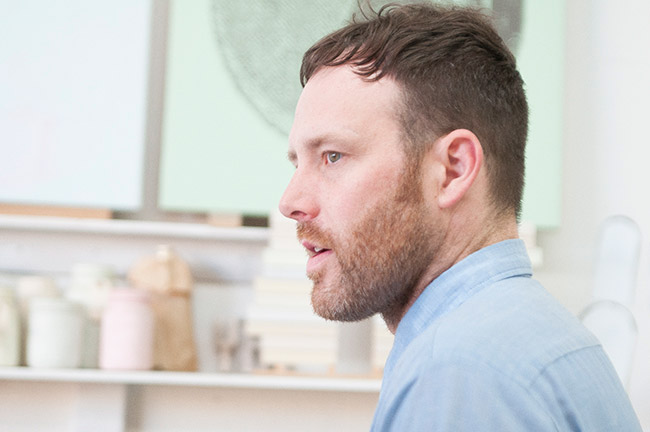 Paul’s studio is filled with the remains of years of sifting through the city for discarded objects, pieces dually considered memory-laden and easily forgotten. Stacked high in blue tubs, the findings are organized as neatly as the many molds for his castings, delicate drawings grace the side of each to distinguish which casting is their match. Through collections Paul has explored the throwaways of Chicago’s inhabitants, creating narrative exhibitions he purposefully leaves incomplete.

I\W: Can you explain your obsession with packaging, both commercially and culturally?
PE: The Newport packages and drug bags I have collected are both forms of packaging, but I think my interest in them is more about the fact that these were the things that were left behind. They are the throwaway part of the process. Collecting the Newport packs came after the drug bags, so I think after working on that for awhile I realized the Newport packs were almost more ubiquitous than the drug bags. That became more of a research-based project, so I can speak to those more in terms of why they are in certain places. I have about 1,500 packs that I collected. At first when I describe these projects to people it sounds like I am trying to find a needle in a haystack, but my interest lies in the fact that they are all so available.

Are you most interested in the anonymity of what you collect (especially in association to the Newport cigarette packages)?
Definitely that, and also thinking about how they have become a kind of symbolic liter. It has something to do with people identifying with the menthol cigarette, the history of that. I think in general my interest in this as a project and an exhibit was because it was very suggestive in different ways. I was doing casual research about ethnicity and smoking menthols. 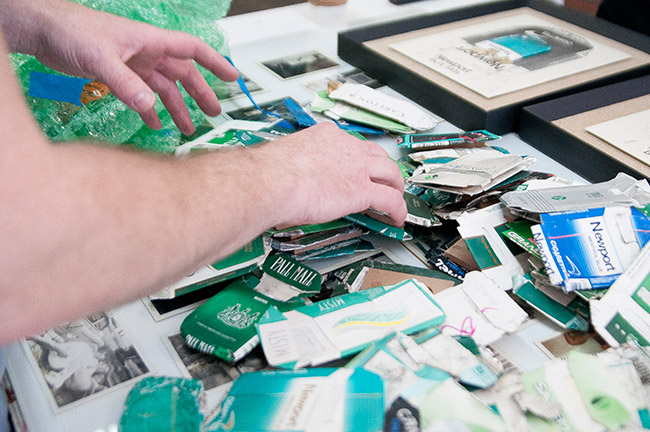 Are your assemblages purely aesthetic to you?
I am definitely interested in associations that are too strong and overwhelming for you to not have them on your mind— the way they look anthropomorphic, or take on some sort of figurative character. Even if I am not that comfortable with the associations, they are there anyway. In a larger sense I am not interested in an insular studio practice in the way that maybe a lot of painters are fueled by looking at other paintings and the canon of art history. I would be an idiot to say that I am not enmeshed or affected by that, but I am more interested or fueled by artists in the past that have used the studio as a place to gather the things they find or are influenced by, then figure out how to make physical decisions about them.

How do you incorporate faux-finishing into your work?
Some of my work, because it has been sitting around for so long, has dust on it anyways—which I really wish I could figure out how to recreate. There are faux-finishing kits to get rust to happen, which allow me to use real rust, but it has more of the feel of painting when I create it. Through experimentation I have figured out tricks to make weird things happen by not using the faux-finishing kits according to the instructions, or throwing in an unexpected substance. I have used caulk which is originally white, but by putting some ammonia on it, it turns blue. A lot of times I save this step to closer when I am going to show the work because the stress or phrenetic energy of getting this stuff done lets things happen more easily. I don’t think they are completely convincing as far as the faux-finishing. I think if you really spend time looking at them you will realize that they are cast objects, and that there is some trickery going on. I am not interested in taking it to that level where it fools the eye. I want it to be just convincing enough that you are unsure about it being an original form or a casting, asking yourself what is the actual authenticity of the object.

Your last show placed your objects back into their found environment, the warehouse. Was that a way to bring attention to their original place?
That is hard to answer because in some ways I don’t know if that was the right environment for my objects because they already look like they come from a place like that. I guess I want to look at the documentation, the environment almost seemed too fitting for them. The motivation to use the space was more about finding a place that wasn’t an official gallery or an institutional space and having it not be a white cube. I felt really comfortable about the motivation, but I am still trying to figure out how some of the casted objects worked there. 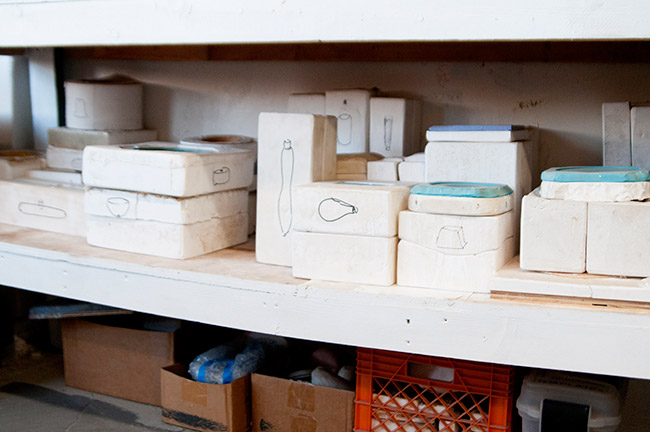 Can you explain the motivation behind your jar castings?
The jars were a part of a project that was a collaboration with Rachel Ettling called Recipes for Mold & Sun. It was based on a farmhouse near ACRE that we broke into. There was this stereotypical cellar with all of these canned goods which ranged from the late 60s to 80s. We found pickles, tomatoes, and a really nasty one that contained chicken. 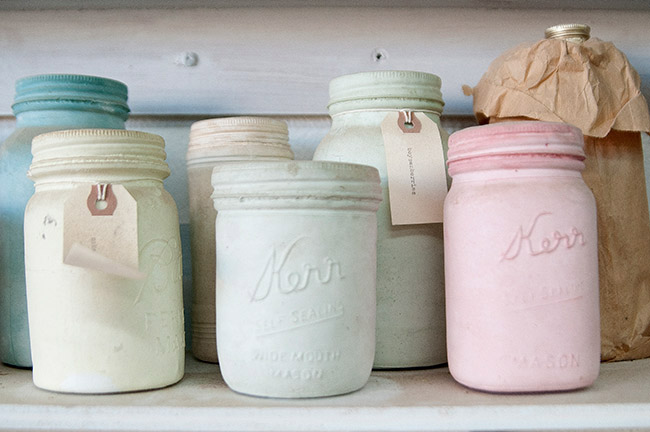 By casting the jars were you attempting to preserve them a step further?
We displayed them on tables, the real jars mixed with the castings. I think it was more of the phenomenon of seeing them in this very pretty form that invited you to touch it versus this totally differentiated ecosystem that had formed within. We were interested in the history of that whole area which developed a large counterculture because people moved there to do seasonal labor picking apples, and then some of them stuck around because land was so cheap. It was in the vein of the Newport Room where we were mining and trailing on some kind of narrative. It was probably frustratingly incomplete for audience members—but that is what we wanted. The house was positioned in this area that was very idyllic—there was a lagoon behind it and it seemed like it was a really great farmhouse. We were doing research in Madison looking at local newspapers and we found a photograph of the actual house that we broke into being moved down the road. It wasn’t even the original location of the house. The project overall was kind of about coming to stereotypical conclusions about things, and then through research and being curious enough, having those disproven. 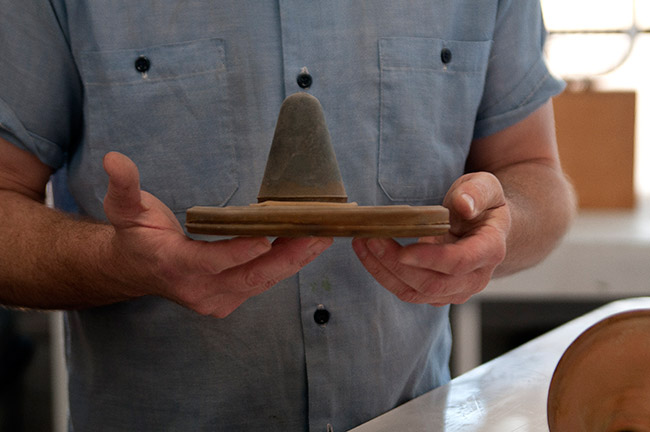 You also had a show displaying a collection you found outside of a medical facility. Can you explain the work in this show, West Plaza?
That show was based on reference photographs that were taken by an orthodontist, all people who had jaw alignment issues. If you zoom in on the subjects’ pupils you could see the doctor with his white coat and old box camera. I liked them because when I first describe the project to people they imagine the photographs all containing people with their mouths open, but they just look like mugshots. That whole show was based on this one collection I found all in one day. There was all these other things like dental tools that I ended up making castings of and displaying as well. 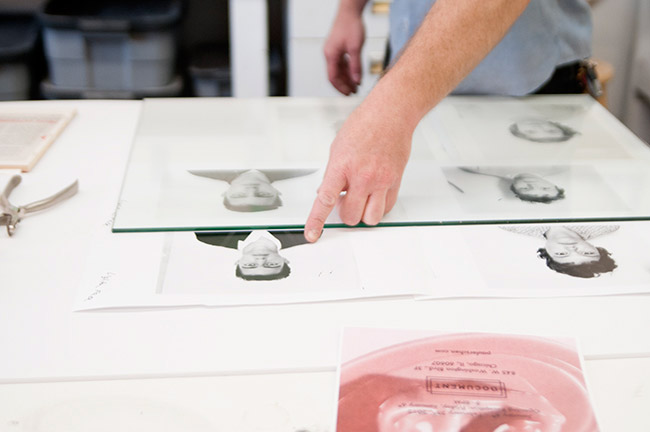 How does it make you feel to bring attention to these faces that would have otherwise been thrown away and discarded?
I romanticize the idea of anonymity, and on one level I feel that there is an indulgent selfishness involved in scanning these photographs and printing them nicely. Then I also feel like their anonymity is almost completely retained. All of the names were included with the photographs when I found them, and I am sure I could have tracked them down or found out more about them. People ask why I don’t push some of my work further into a research area. I don’t want to make a complete narrative, I have no interest in that. I usually leave things frustratingly vague. What bothers me about that approach is that it can come off as not being thorough, like I didn’t work hard enough on it. I could see that changing, but that’s where my work is right now.

I am not interested in taking it to that level where it fools the eye. I want it to be just convincing enough that you are unsure about it being an original form or a casting, asking yourself what is the actual authenticity of the object.

Will you talk about your brick pieces you have been making recently?
I really like the idea that through fairly modest materials I can mimic a much larger industrial technique, like masonry for example. I am also interested in the scale games that go on with these other objects. These are at 1/2 scale. I am interested in being able to create this technical formula of making something that can reference something really specifically in the built environment. This piece is based off of an actual bricked-in doorway off of a specific building. I think it gets into that idea of anonymity. The pieces I am making certainly aren’t based on iconic forms of architecture, they are these buildings that could be gone tomorrow and no one would even know or care. It is a little form of documentation. 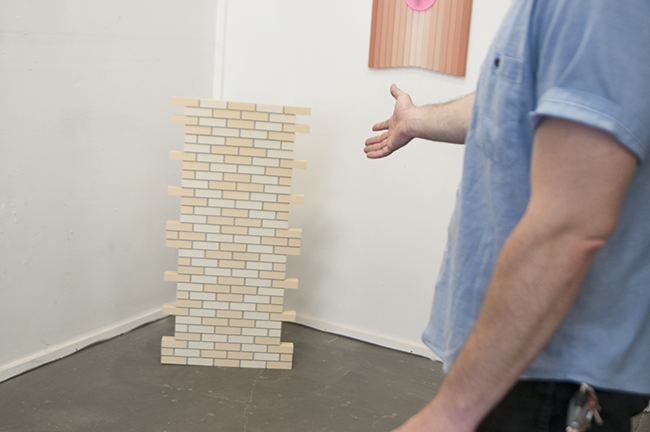