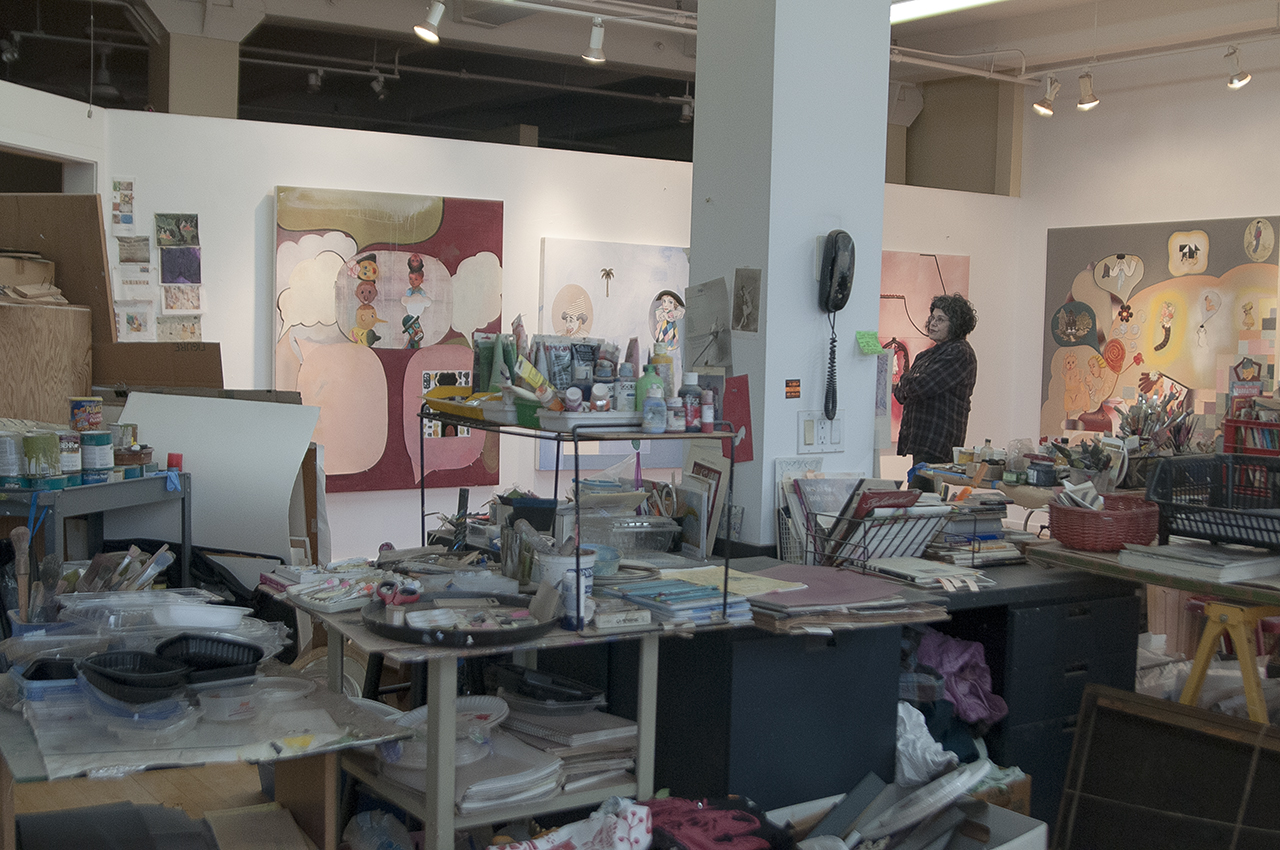 I\W: Do you source your images beforehand, or once you get a sense of the background of a piece you are working on?
PB: I just try to figure it out. I have a piece I am working on now that is in such an ungainly state and I keep trying, and push things that aren’t working. I will carry it through until I can’t take it anymore and then I might cut the painting up. However I haven’t been cutting up work much lately. I source from warehouse paintings, which I have been doing since 1991 when I went to a flea market and there were about 20 clowns, all the same. They were all beautiful and I had seen an artist that had made a frame of paintings, so in the beginning, I thought that’s it. That’s what I am going to do. Before I had been cutting up my own paintings. I have bins and portfolios throughout my studio with various paintings in them, waiting for fragments to be used. I never allow others’ paintings to exist within my own without doing something to them. Sometimes I will leave the original signature in the cut up painting. I am not pretending that they are my own. I’ll also use pieces from felt calendars, party places, a child’s book, and kitschy pieces from Michael’s. I am not sourcing these all at the same time. It’s sort of Duchampian. It’s like I have a divining rod in terms of what I will use. In the past, I used much more collaging in my paintings, but I’ve decided lately that I need to paint more and collage less. I have felt that collaging might have begun to hold me back in terms of more painterly moves, however they have been wonderful mentors. I used to be a very painterly painter. It’s my past and I am not necessarily excited to go back there, but I don’t want to totally reject it either. The collage work still helps fuel my ideas, whatever those ideas are in how I begin a painting. 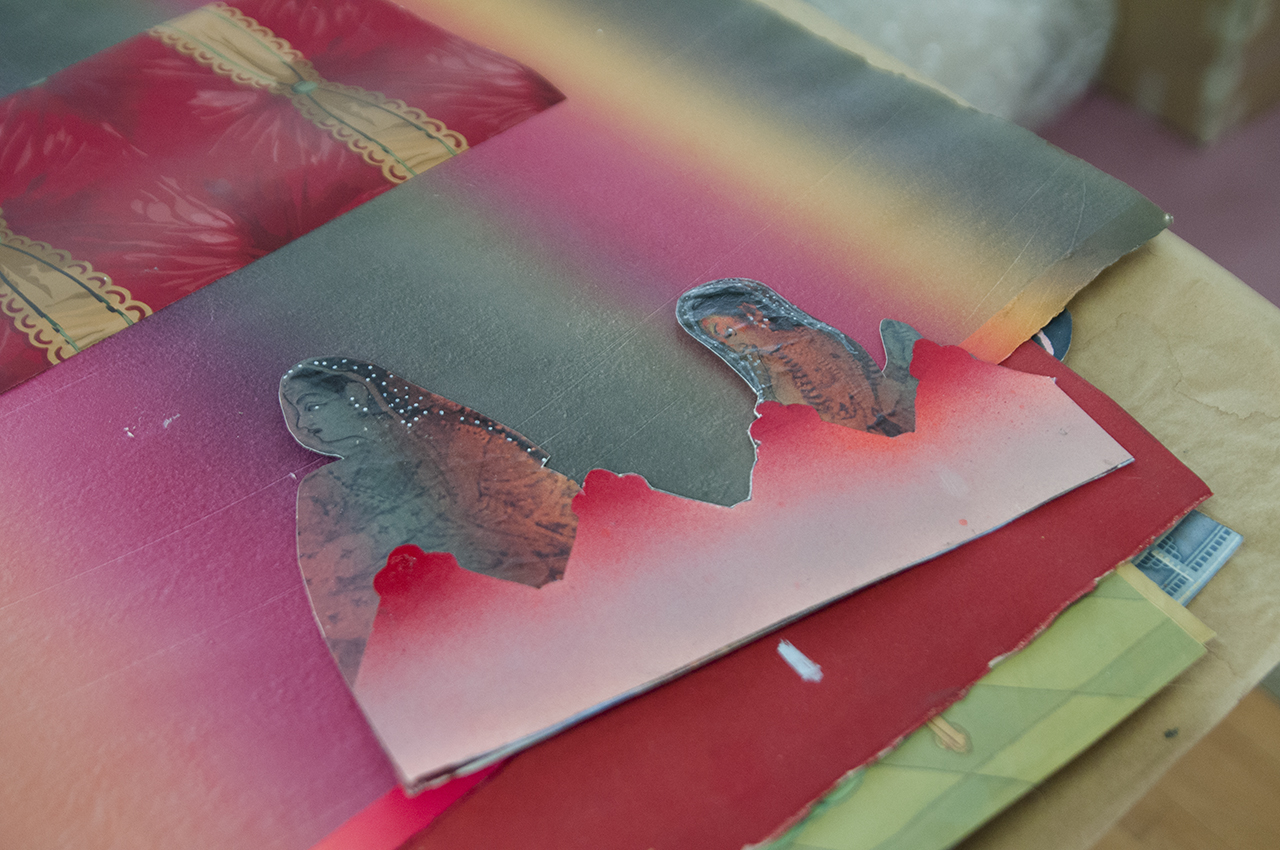 Do you have any studio habits?
All day long I listen to public radio. No music, just public radio. I love it so much because it educates me all day long and I am hearing about things, people, ideas and I think that’s a little bit what this work is about. It’s about being human, it’s about fragments of information. When Post-Modernism came into being that opened up a huge door for me as I think it did for a lot of people, especially painters. I can work completely abstractly but I wouldn’t be able to stay with that. 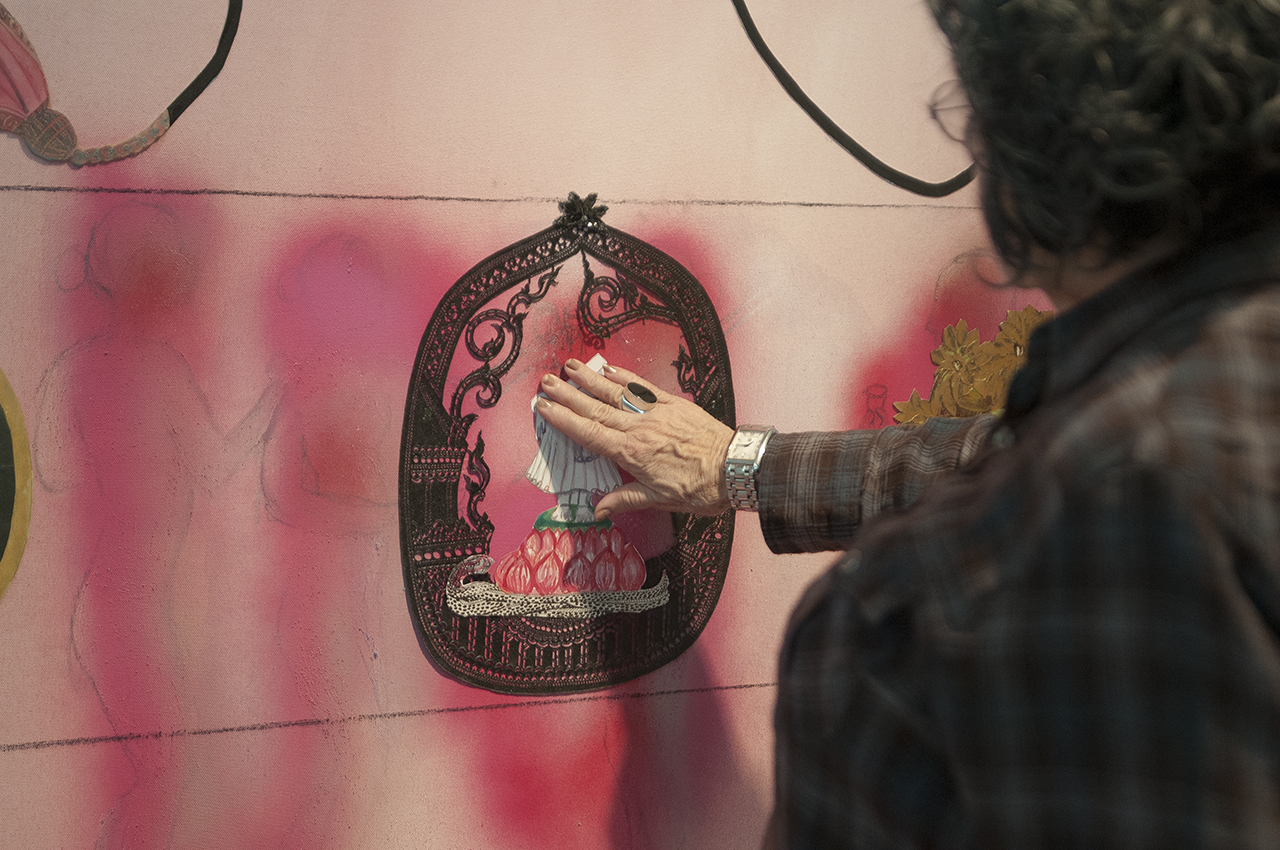 What were some of the influences for the sexual subject matter in your work?
I think it is about being human, and also my dad was very robust growing up. Our house was filled with naked figurines, and paintings, and nude figured ash trays. There was also a lot of oriental aspects to our house and there was kitsch. He was the decorator and sometimes it would go awry. I think I absorbed it all. One time I even found Swedish nudist colony magazines in his closet. Then he purchased these fantastic books called Eros by the guy that published Screw magazine. They were exquisite. They had a somewhat sexual bent, but the pages were beautifully designed and had beautiful illustrations. My dad, when things were not going well at home would go to the drugstore, have a malt, and look at girlie magazines (the vernacular at that time). I believe his interests are where I have pulled some of the eroticized aspects that have influenced my own visual thinking. I feel like that is what gives the work a particular twist. However, I have had odd comments on it, rude comments about my paintings. Sometimes people will say my work is dirty or ask if I suffered abuse as a child and I get very upset about that. I am not sourcing images from internet pornography. My paintings are gentle, playful and actually quite sweet. I like to make some shapes as ornery and badass as possible. It’s necessary. That’s life. I have also looked a lot at 1000 Arabian Nights, the Kama Sutra, and Chinese erotic art. My work moves culturally. Sometimes my images will be embellished with Indian/Persian imagery. When I lecture about my paintings, I talk about Orientalism. It’s a real word used in art history, it’s there and I am going to keep using it. I guess it is just my philosophy that the world is ambiguous, the world is troubled, the world is beautiful, people are great, people are not, words are dangerous, and sometimes they are not. I am hearing it all and maybe it’s why I cherish public radio.

I used to be a very painterly painter. It’s my past and I am not necessarily excited to go back there, but I don’t want to totally reject it either. The collage work still helps fuel my ideas, whatever those ideas are in how I begin a painting. 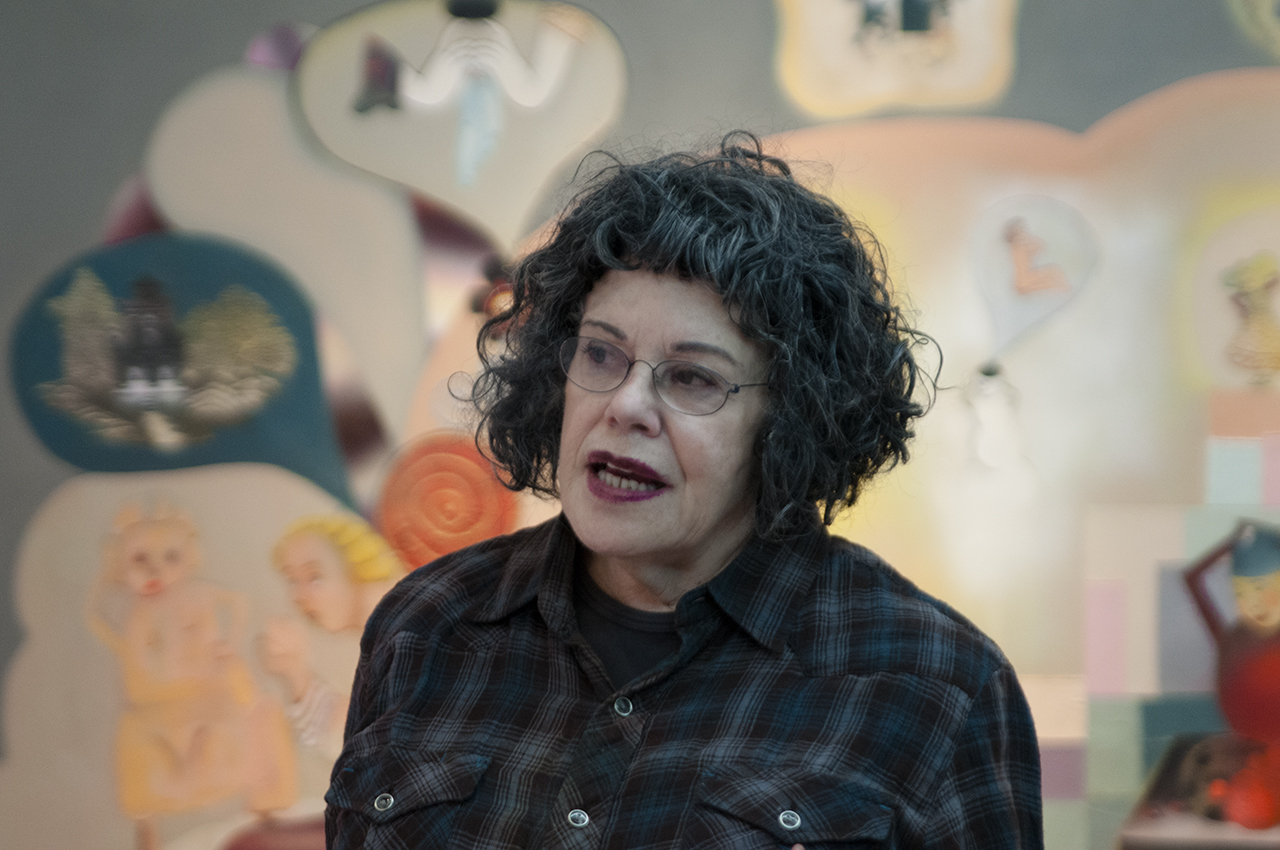 Where does narrative come into your pieces?
Sometimes I have made art about making art, but usually the narrative (if there really is one) I have to figure out and often it’s the title that helps finish it. I have lists of titles I have been collecting. so when I read a book, I will usually get some great titles. I just read “She’s Come Undone” by Wally Lamb and I wrote down quite a few things from that. 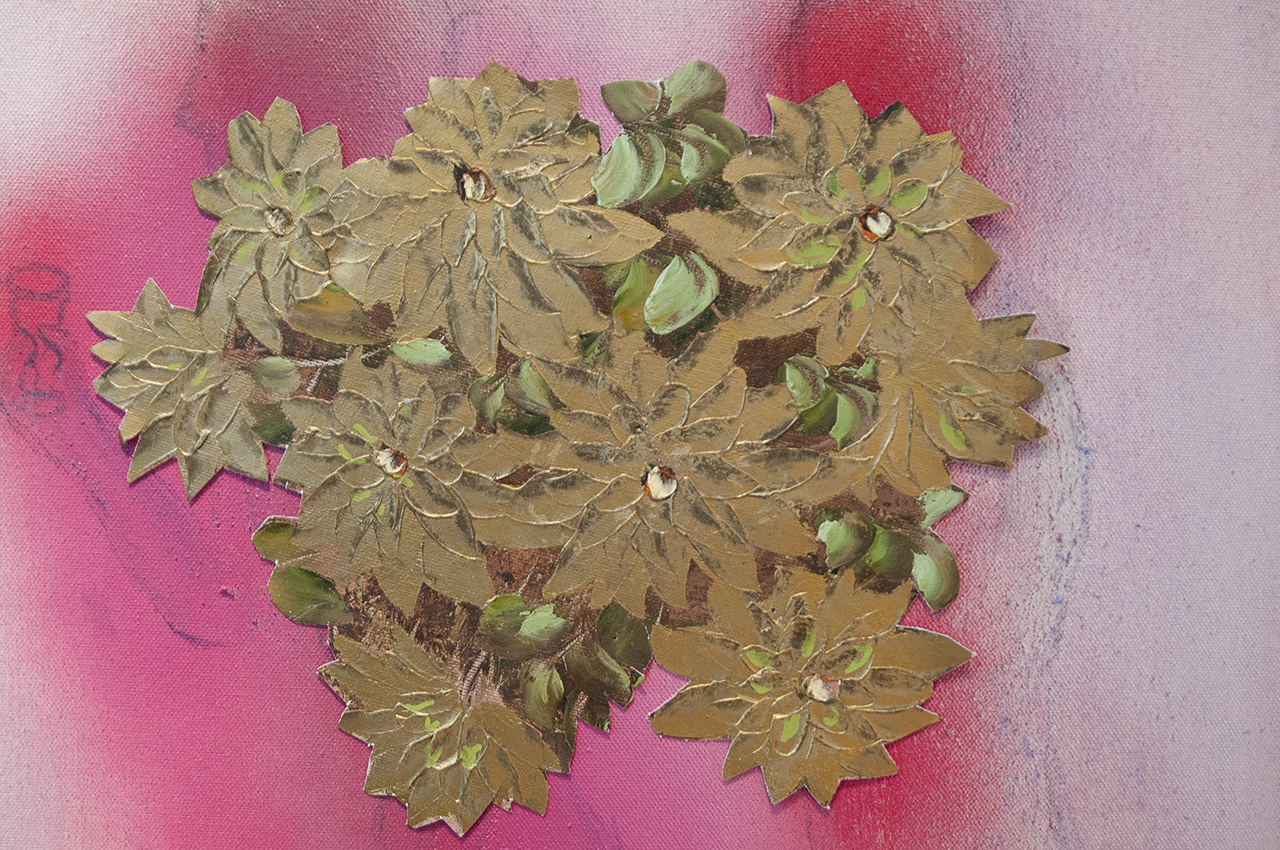 Do you approach narrative differently when you are creating a work on paper?
No, well maybe a little. After I am done with the paintings that are presently on the wall in my studio, I am going to start to make large scale drawings again—4×6 ‘or 4×8’. I am also going to do some object making. I feel that painting is really in an uneasy state at the moment. Maybe not as interesting as sculpture is now. I do have an interest in sculpture, but I am not a sculptor. I think I don’t have to struggle so hard with drawing as I do with painting. I do a lot of tracing as well when I am working with paper which I am not apt to do as much when working with canvas. That might be the difference. To be honest, everything I start is in a rather befuddled state, a mystery, and unpleasant. Even after all these years it’s horrible. I have no idea what to do. I have always said that I am a contaminator of conceptual thinking. I view my work as abstracted narratives. They are really as much about abstraction, there is usually not really a story. 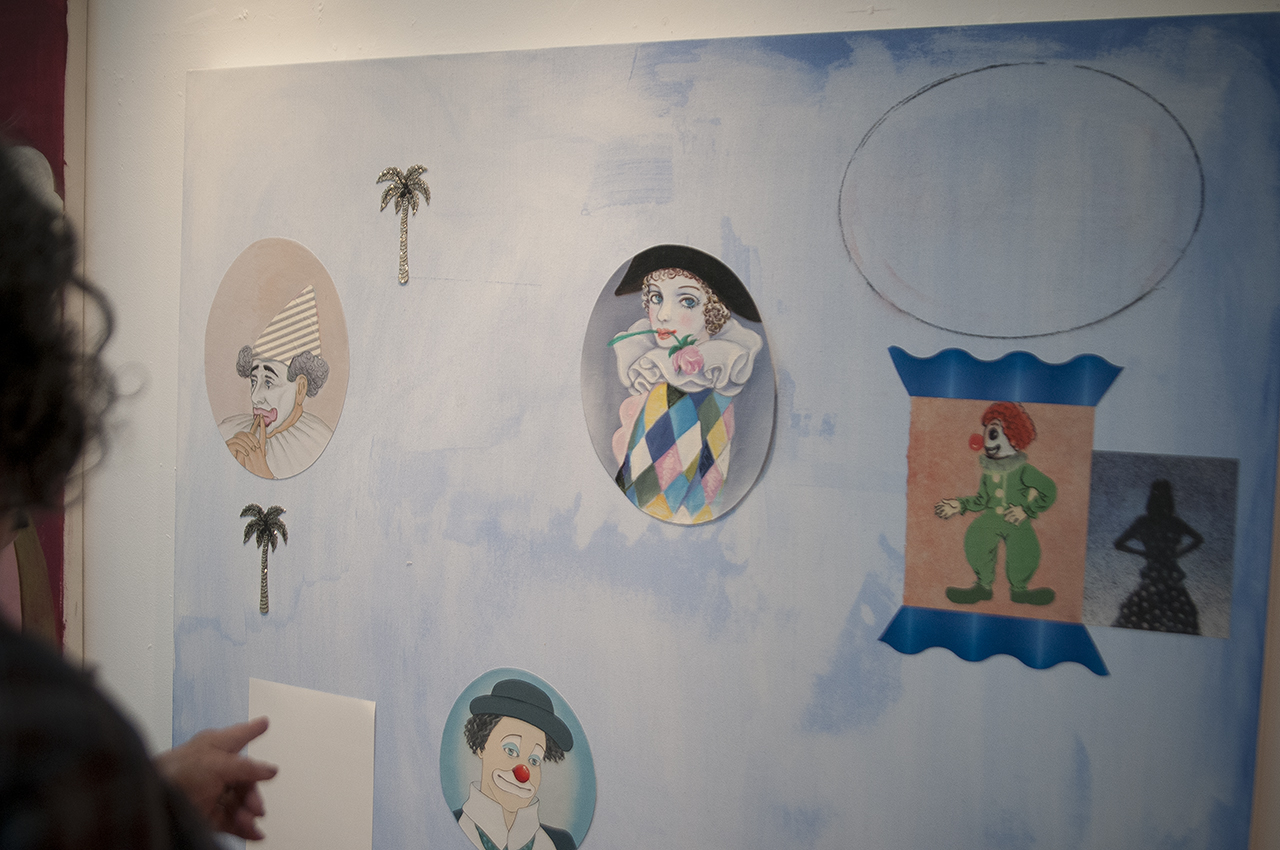 Do you relate the act of painting to your subject matter?
I think my relationship to painting is all I know and basically all I am interested in. But I am not interested particularly in classical painting or hardass tightwad abstraction. I will look at it, sometimes I like it, but usually I find it generic and I am just not interested in it. But I am interested in eccentrically conceived abstraction. I am interested in painters that keep pushing the envelope. My relationship to painting, I don’t mean to sound arrogant, but I feel like I am contributing something to painting whether other people think so or not. That is the problem I have. I don’t know if anybody else thinks that or not. I feel I am still fresh, still figuring things out and it is still difficult and it is still a challenge. I am a confirmed and cursed humanist, that’s all I can say… the work deals with the good, the bad, and the wayward. That is why I say that my work deals with “love and kisses in a troubled world.” Fairytale trails about love that started with Adam and Eve! 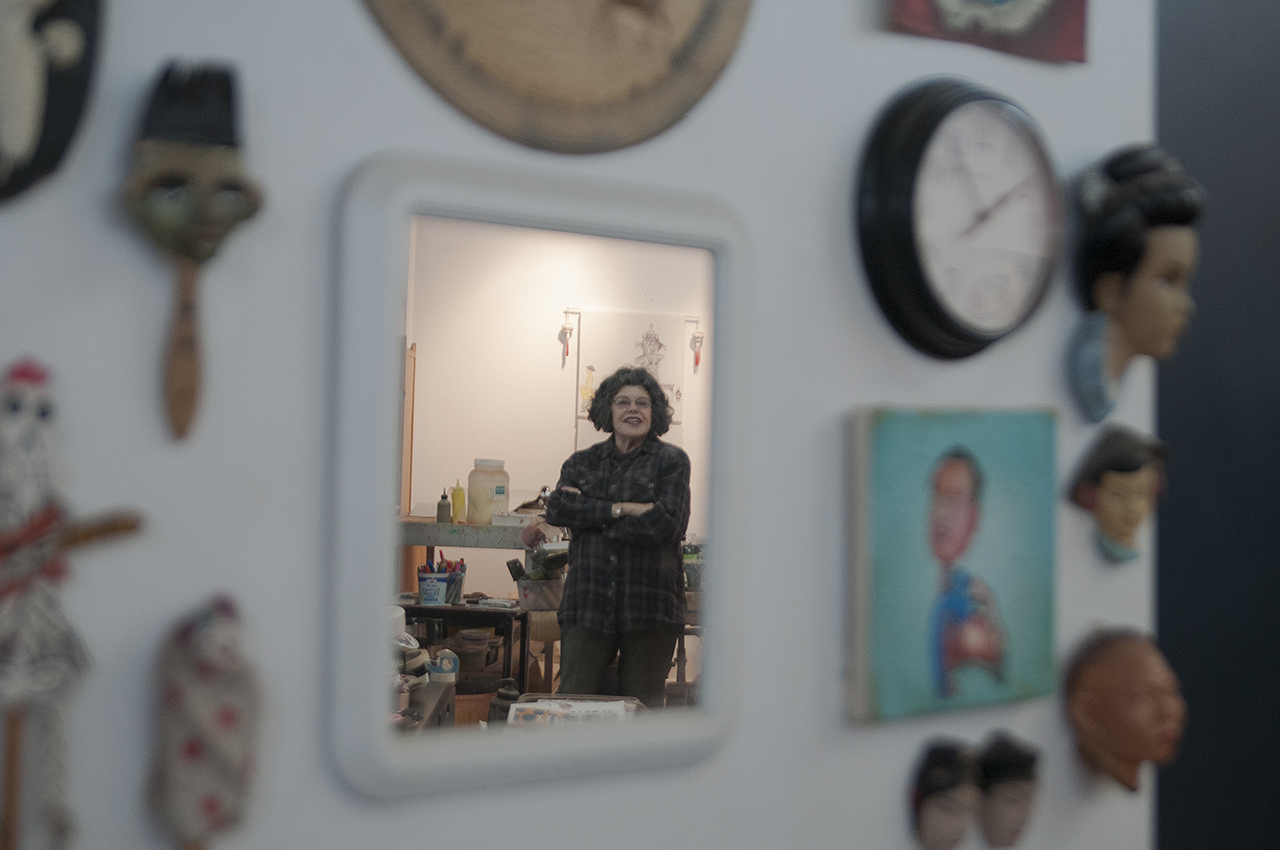