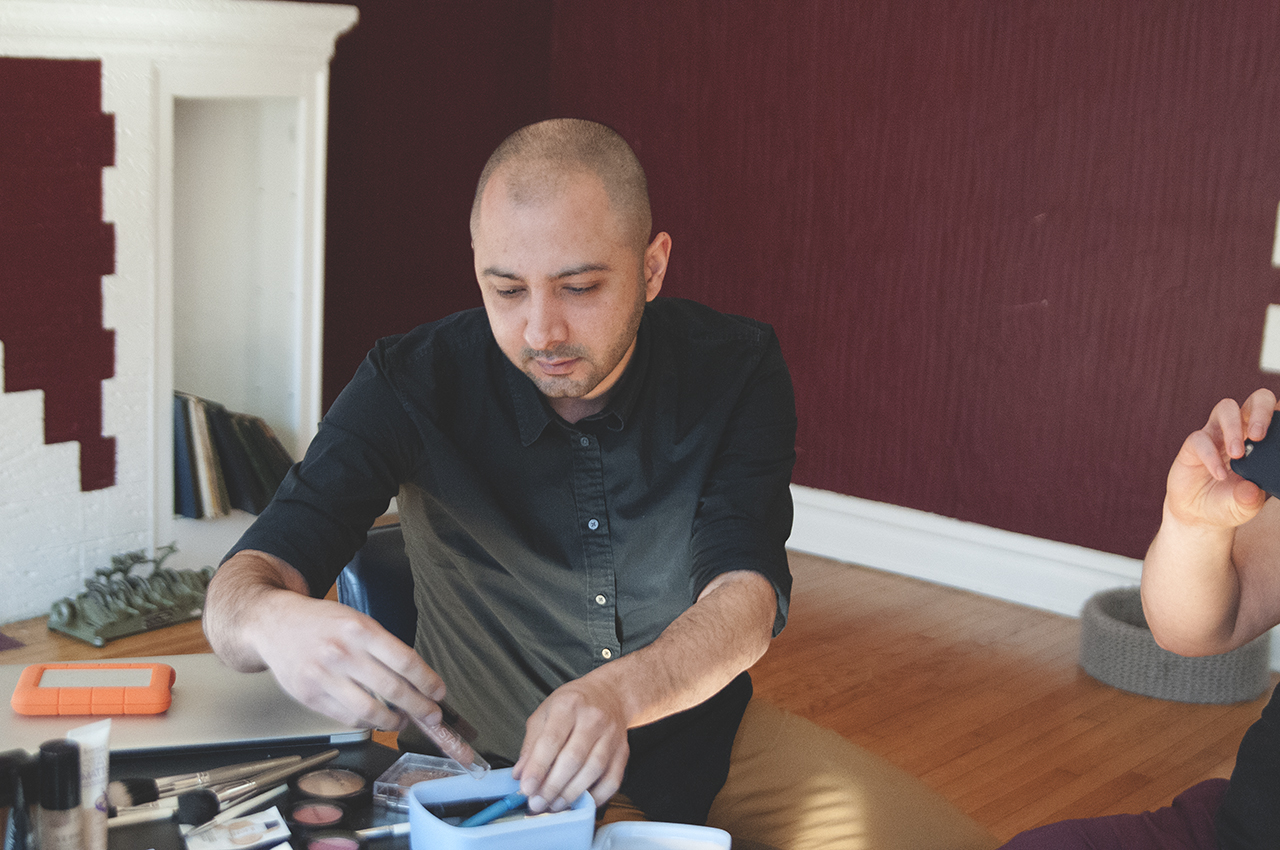 INSIDE\WITHIN and Danny Volk sit down with Rambod Vala to learn how he tricked his way into grad school, why depression lies at the root of his practice, and get him to admit his go-to karaoke song.

Rambod Vala: Danny are you ready to be made up?

INSIDE\WITHIN: How did you end up working in graphic design?
RV: Wow, it is extremely difficult to apply makeup and try to talk at the same time, so I am going to try my hardest. When I was about twenty, all I would do was sit in front of my computer and play with Microsoft Paint. I would make collages for hours and hours. At one point, my cousin was at our house and saw what I was doing and thought I might be interested in graphic design. I started learning, took some courses, then sent a portfolio of myself Photoshopped into different landscapes to several firms in Tehran. Of course they rejected me. I didn’t know I had to take it to a level of education, I just thought graphic design came intuitively. I began taking more classes and went to university, and that is how I started the whole thing. That paint program was like my therapist and guide.

I\W: How did you make the transition from studying visual communication to fine art?
RV: My challenge when I was applying for schools in the US was how could I, as a person that was doing graphic design and had no art portfolio, apply to art schools? To start from scratch it would have taken years to produce a new portfolio. What I did was see how I could be more acceptable as an applicant to schools. Coming from Iran and working with political issues seemed to be the key to admission. I made a whole portfolio in two weeks that consisted of 10 images and 3 videos. After three years of applying with the same portfolio, I got into Northwestern. 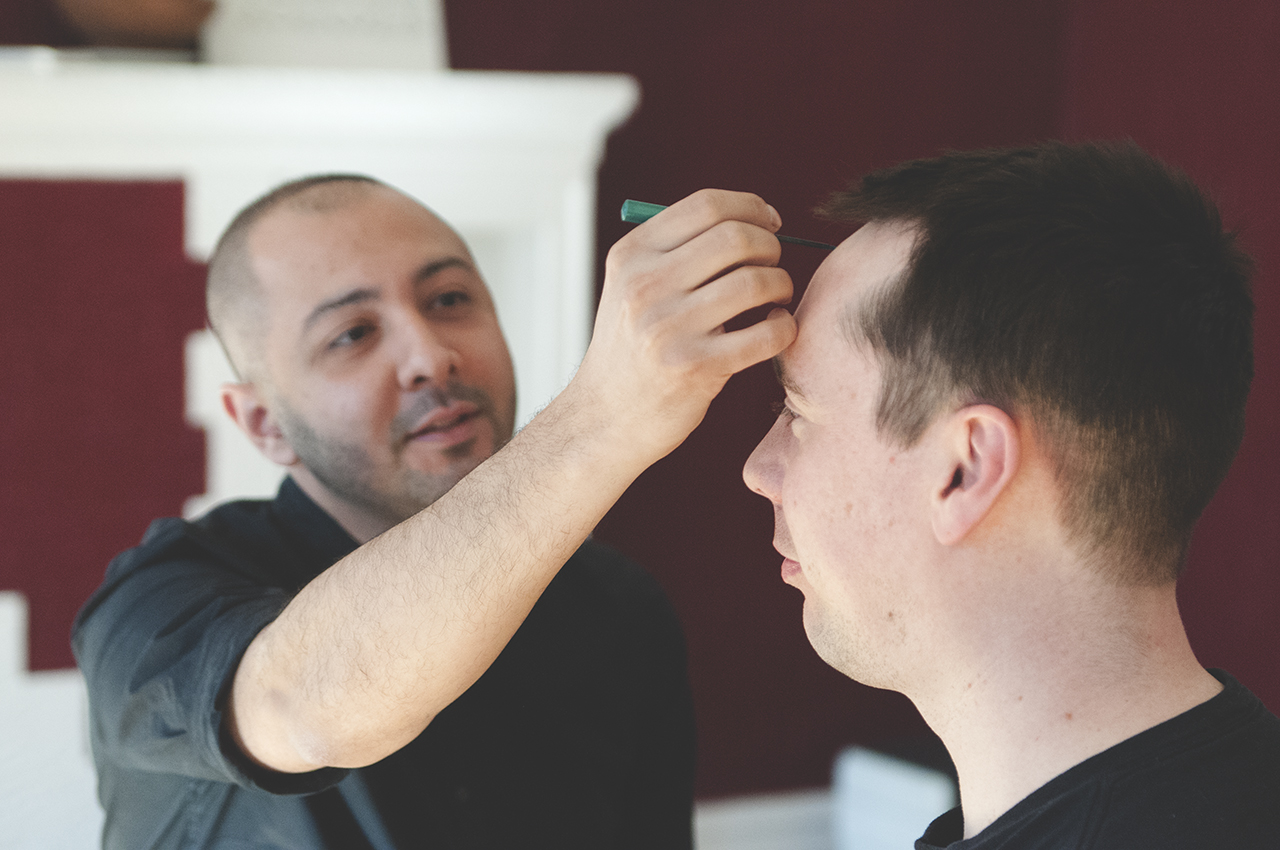 I\W: What similar themes are you investigating with both your fine art practice and graphic design work?
RV: Let us imagine two cliffs standing in front of each other, separated by an abyss, a great gap. And let’s further assume that each cliff represents a polarity: each cliff is the antithesis of the other. The first thought that comes to mind is reaching the other side by a bridge. This bridge, however, does not necessarily become the object of understanding simply because it connects the two. It is rather an object of curiosity, a pathway for more discoveries. And discoveries are, of course, full of misunderstanding. This misunderstanding becomes that abstract object of art that can be interpreted infinitely, and the bridge is that misleading conduit for misinterpretation.

But if we dismantle the idea of the bridge and never intend to have one, the existence of the gap becomes the basis for a concrete rather than abstract understanding. Instead of the simple act of crossing over and with it the illusion of the mutual connection, let’s consider a collapse as a demonstration of the existence of a gap. A gap out of which one may generate production, develop lines of flight, new possibilities for engaging with alterity. It all unfolds within this gap or in-between-ness. The struggle to produce, rather than arrive at an understanding, is at the cornerstone of my art practice.

As a graphic designer, I am provided with content that does not require my allegiance or belief. As an artist I function both as the designer and the content provider. I may be bridging these fields or may have collapsed them, but what is certain is that the gap is filled with images, objects, and voice as form. Texts, theories, and stories compose the content. Both have eroded and tumbled down from the cliffs. So long story short, I don’t think I am looking for similar themes with Design and Art. I am using design to create the form of my art. In my videos there are elements designed and formed to match the content of each piece. 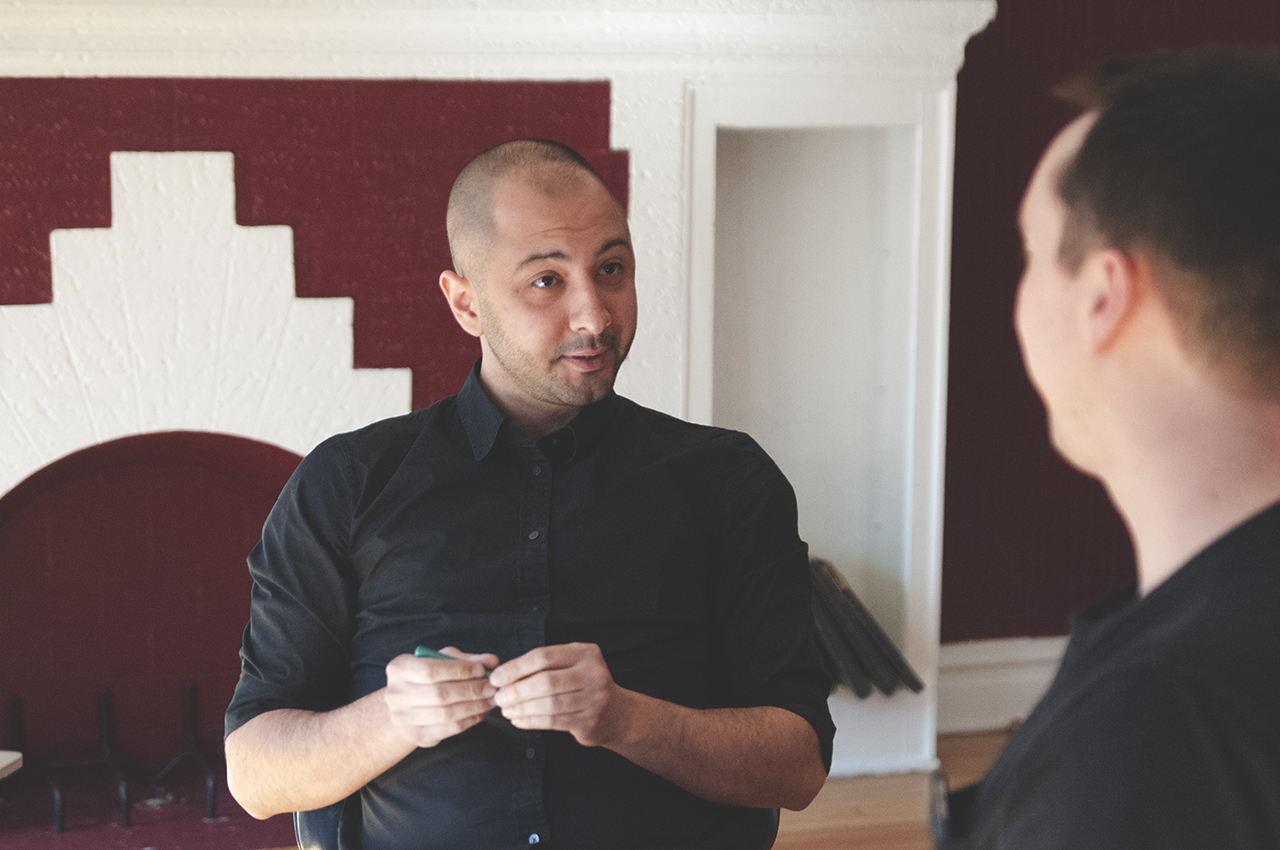 I\W: What is the reaction you hope the audience has for your films?
RV: It is almost expected, perhaps, that I, as a migrant artist, should make work related to my nationality, because the name of the nation will immediately conjure up a spectrum of mixed-up emotions in the audience. They will be partially curious, politically engaged, touched, and convinced that the traces of this facet of my identity has enriched both my practice and the host institution’s diversity. However, the excitement and curiosity of such understanding is not the type of engagement my films calls for.

I was actually advised not to make work related to my identity as an Iranian during the first quarter of school at Northwestern University. The faculty believed that the worst thing they could do was pat me on the shoulder and tell me to keep doing what I was doing. They could tell that I was using my exotic identity as a crutch and as a false motive for producing works of art, I guess.

Right after that critique, I started rethinking the whole practice and decided to work on personal narratives. The main concern was the production itself. I was looking for a type of production which could not be labeled as this or that. And of course, I am still searching.

I\W: What sort of narratives are you focusing on currently in your films?
RV: Each project has its own narrative, and mostly it is a mixture of some themes such as love, identity, immigration, forgery, labor, vulnerability and institutional criticism, to name a few.

At the moment I am working on a project based on the relationship between depression, immigration, and exhibition of wound as a work of art which is an expanded version of my video installation Shahed. It all starts with depression and how depression becomes the motive for replacement and immigration. And all that is often a traumatic experience which might become the main source for art creation. And then the institutional interest in such creations. The narrative starts with a biographical story about my authentic family name. My grandfather was an officer providing food for Shah’s palace in Tehran. His job title was “Afsar Dokan.” Afsar means Officer and Dokan means Store in Farsi. As a result of the rapid modernization in Iran in the early 20th century, citizens were attending the office of registrar in order to be given an official last name. Mostly ordinary citizens were given names related to their jobs. My grandfather’s last name would have been Store Officer if the registrar had not misspelled K in Dokan with G. Due to that mistake for a whole century the name of my family has been Afsordegan which means Depressed. Depression for decades now runs in our family, even though almost all the family members have changed their last names to different ones, including my father. My grandfather passed away some years ago. He left nothing behind except depression.

It is almost expected, perhaps, that I, as a migrant artist, should make work related to my nationality, because the name of the nation will immediately conjure up a spectrum of mixed-up emotions in the audience. They will be partially curious, politically engaged, touched, and convinced that the traces of this facet of my identity has enriched both my practice and the host institution’s diversity. However, the excitement and curiosity of such understanding is not the type of engagement my films calls for.

MUwDV: What would you say is more important than art to you?
RV: Cinema, which itself is a form art, but not as exclusive as “art.”

MUwDV: OK let’s step even further back. What is more important than cinema?
RV: Survival. 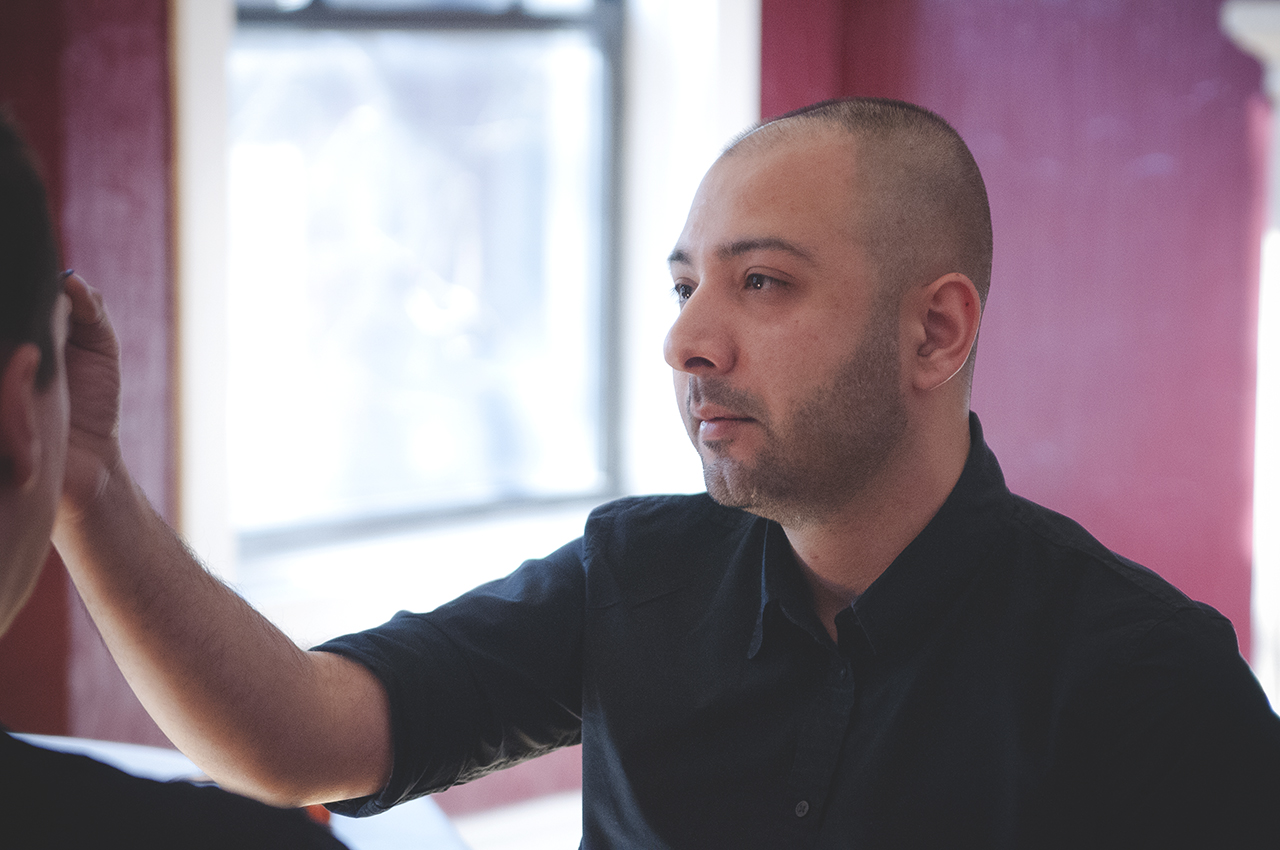 MUwDV: I feel like in a lot of your work you talk about love and romance. I’m surprised love wasn’t your answer.
RV: My work is an attempt to graft the aforementioned cliffs into each other through the character of a migrant and an imposter. The videos are all structured as love stories and poetic narratives that unfold between territories and people who can neither stay nor are able to leave. Stuck on either side by a crag, they are constantly pushed and pulled, attracted and repelled by their mass, as they try to negotiate a position, identity or fidelity.

It always starts and ends with love. But love is mysterious and infinite. What is more important to me is how to survive and maintain in order to be in love and work about love.

I figured out that everything I was trying wasn’t quite working because it wasn’t associated with my concerns. I don’t come from a traditional studio practice, so I can’t just sit in the studio with materials and start making something work and have a commitment to object making. That might be the best way of survival in art but I don’t associate with it. I cannot simply function that way. My work is not produced in a studio. It all unfolds outside of a studio. Everything that happens goes on in my laptop. My studio is measured in terabytes rather than square meters. I am interested in stories, karaoke, and chains of events. With this type of work I should be concerned with survival.

MUwDV: Can we pry and ask about your karaoke go-to?
RV: Under The Bridge by Red Hot Chili Peppers