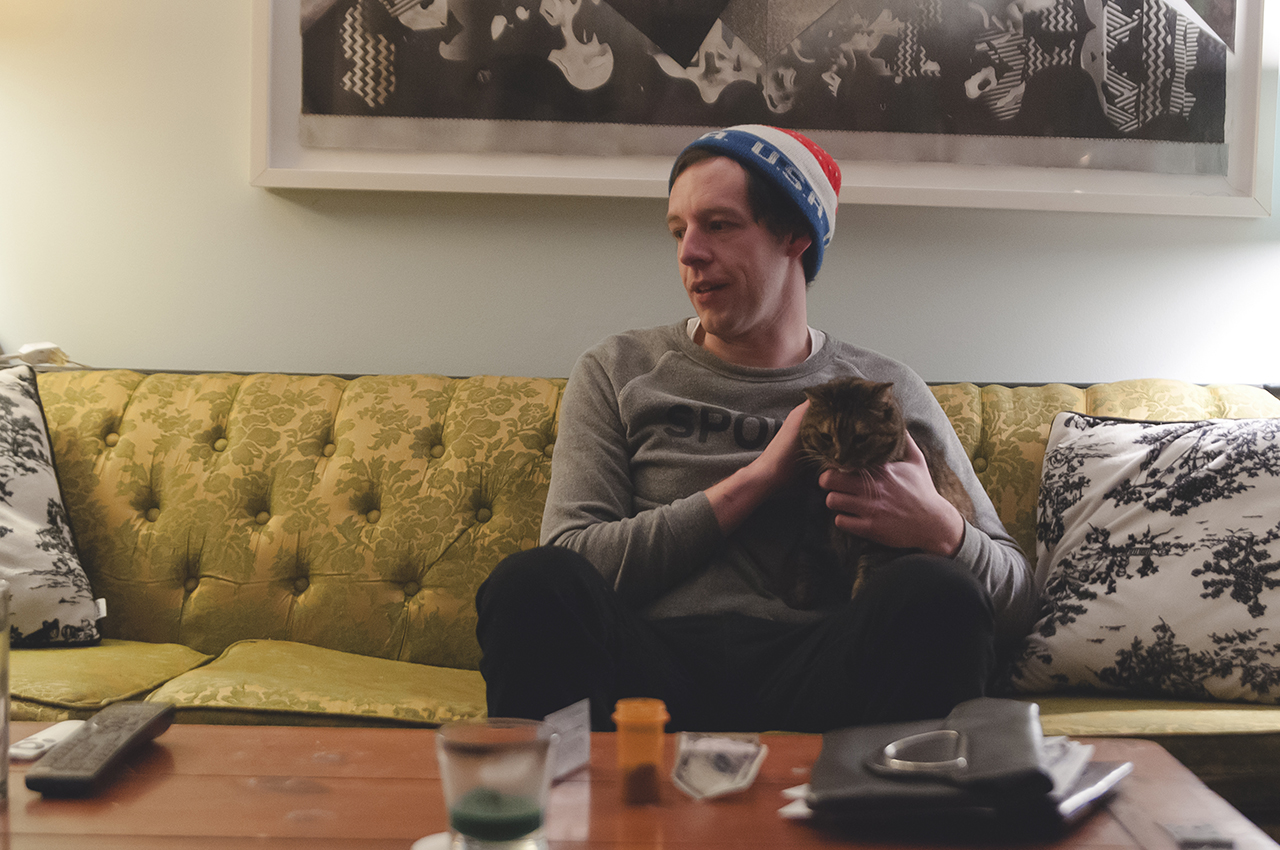 Ryan’s detailed drawings incorporate graphite, rubbings, and personal histories obscured through cartoon figures and geometric explosions. Suburban life is just one of his many influences, as he attempts to twist mundane activities into graphic fantasies. Ryan also curates massive exhibitions, his latest show bringing together over 100 works from artists across the country.

I\W: What is the main purpose behind your multi-city exhibition, Ducks?
RTC: Years ago Scott Speh at Western Exhibition offered me a curatorial opportunity for the show Power of Selection, and I decided to make it really inclusive. I also tried to stress bringing art to Chicago that wasn’t being shown here. I wanted to show friends from the Bay Area or New York that I thought were making really great work and I stood by what they do, but hadn’t had coverage in Chicago. After that I did a two-part show called Where my Cones At? that was all black and white artwork, including artists who worked in black and white or oppositely were prone to a lot of color. That show was a similar idea, just as many people as I could wrangle up. Ducks, well I have a thing for ducks. I always have, they are silly. I see a lot more of them now since I have moved out to the suburbs. I noticed a lot of artists I like such as Eddie Martinez and Joey Pensato were using ducks in their work, and I have in the past as well. It is not conceptual at all. None of it is deep or thoughtful, there are topics that influence it of course, but I am definitely prone to liking silly things. It was a random subject matter to throw out and see how many people we could get to make a piece about ducks. I did it in Brooklyn with 99 or 101 artists, and I just added another 100+ people to the show for it’s LA iteration. What is most important about the show is the social atmosphere. A lot of the participating artists are students, mid-career people, and there are handful of heavy hitters that don’t even need to do this. I am a notoriously good networker, so I can get big names and little names. At the Brooklyn opening, a lot of Chicagoans and New York artists came out, a lot of people get to meet each other in real life. 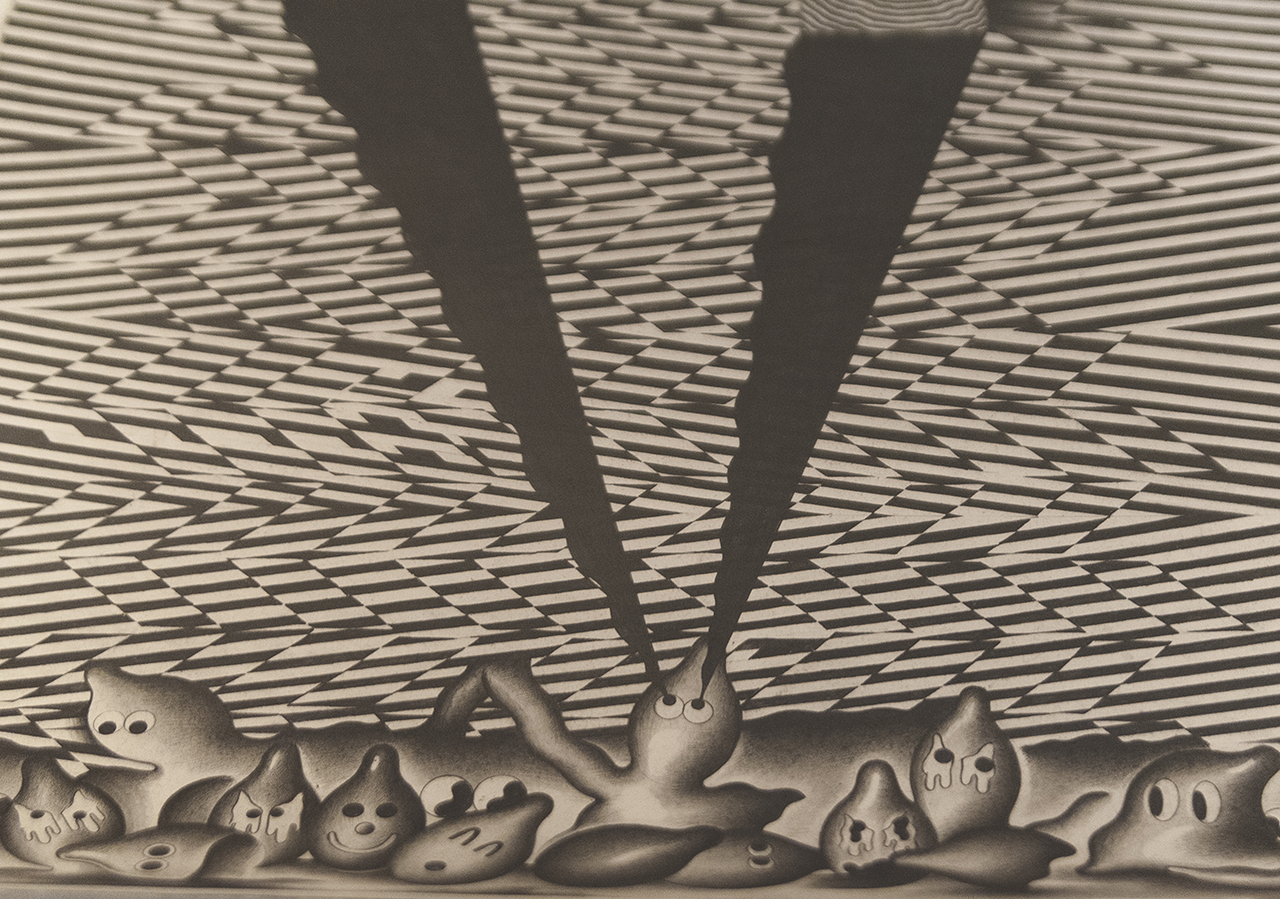 Do you feel like inclusivity needs to be more prevalent in the art world?
I think so, maybe not “needs” to be more prevalent. I imagine it would make the art world a lot cooler than it is right now. You go to fairs or after parties and you clearly see power structures and tiers of people. It’s stupid. The art world is stupid. Ideally that would be good, but I don’t know how that would turn out if it happened, and it never will I don’t think. 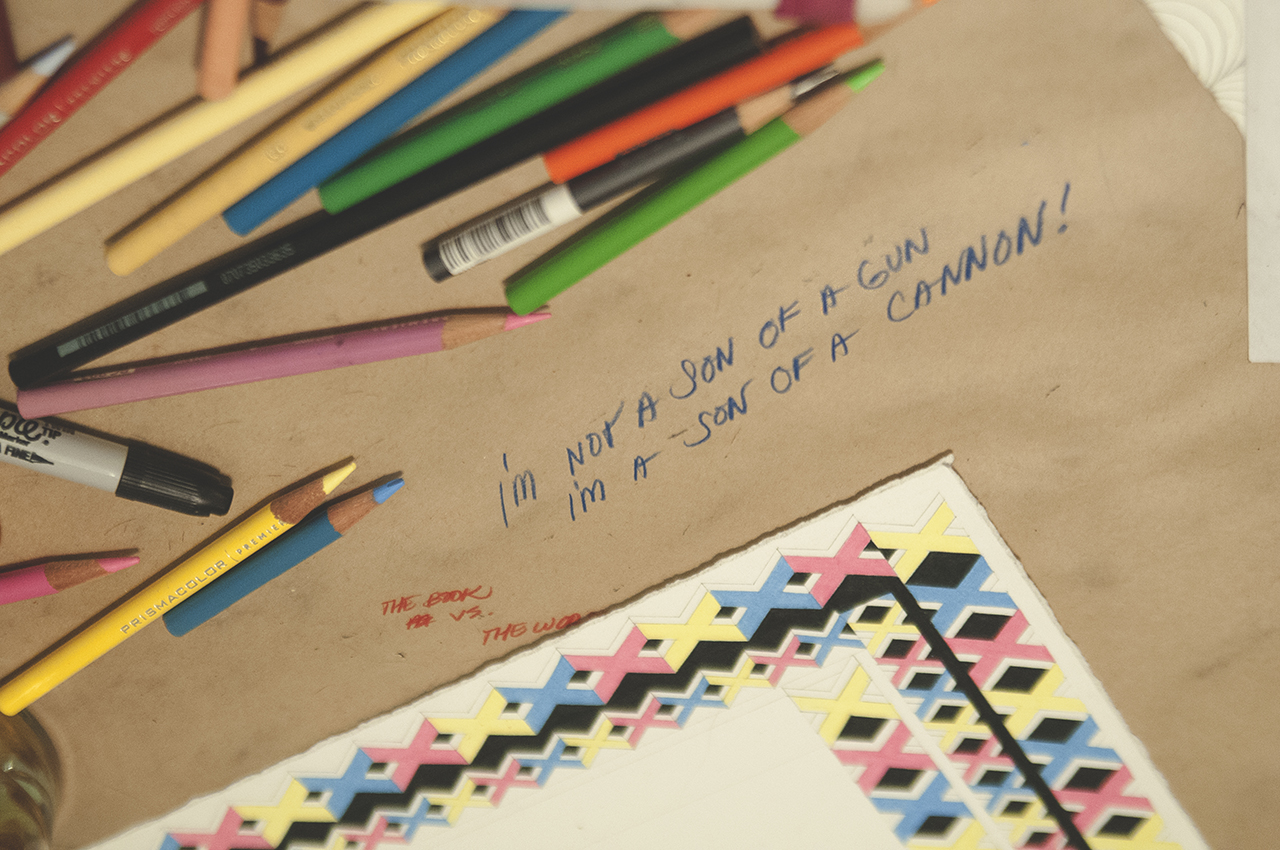 Is the genesis of your drawings mostly these little odd notes you write down for yourself?
Yeah, absolutely. They are all over. There are scraps of notes everywhere. Like: “I’m not a son of a gun, I’m a son of a cannon.” That’s something I heard in a song the other day. I am all for stealing as much as possible as long as the source is grade A. That happens a ton, and also I lose a lot of them and some will come back to me and that’s a good way to figure out if they are actually important, if they keep coming back. A lot of things I steal will just become unattractive after sitting on them for a bit. I steal a lot of things from all kinds of sources like movies and cartoons, music, sometimes just ideas my girlfriend Marcie and I will generate in a discussion or with other friends of mine. The goal is to produce an image that stands up to the caliber of the source. 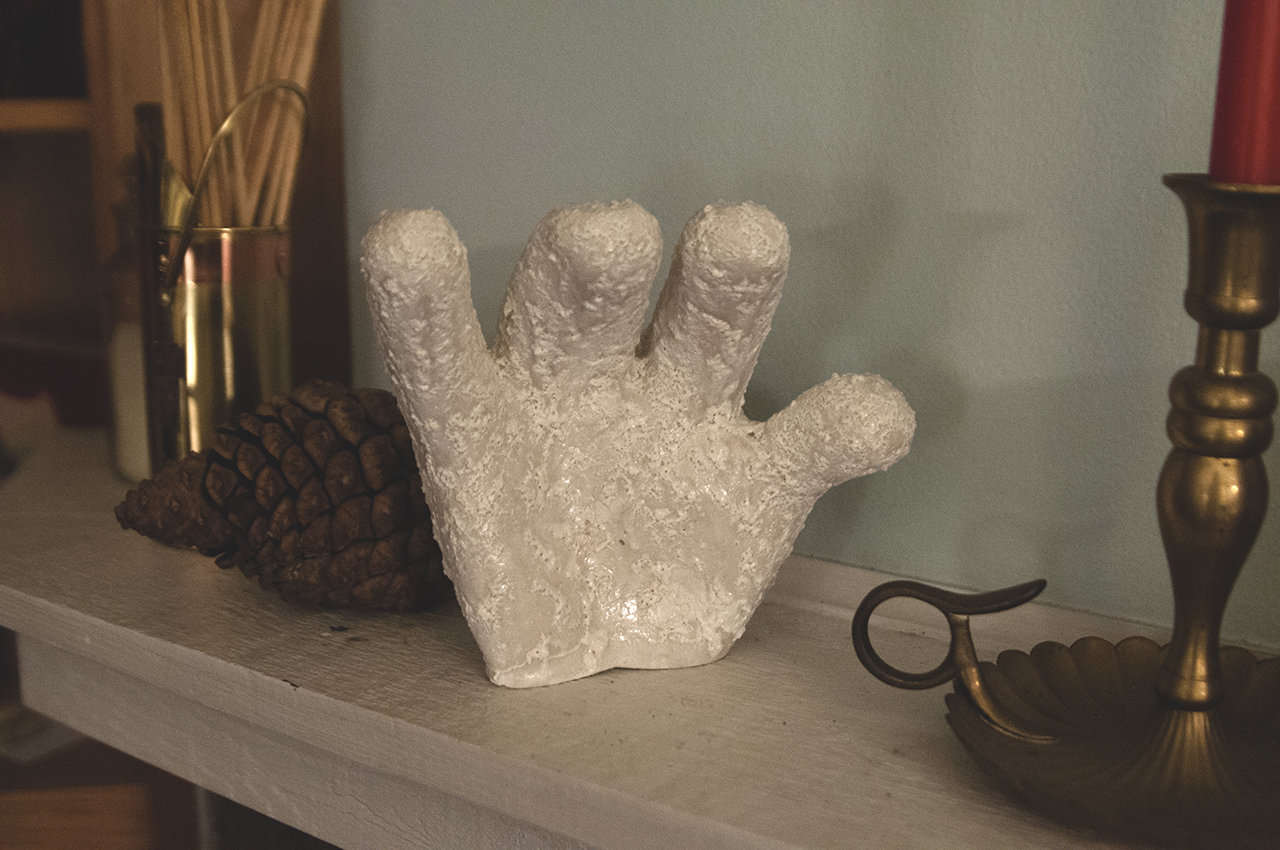 Do you feel like your goal is attempting to craft those small phrases into narratives within your work?
It varies. Generally I will try to make it more of a narrative image. I bounce around a lot. A lot of my older work, or more well-known work, is instances in my life that I thought were funny, or little anecdotes that are personal. I wouldn’t try to spell them out too hard for people because I believe the best art has some element of mystery for the viewer. They don’t give a shit about some night I had with some people they don’t know. So yeah, experience + obscurity + goofy phrase/title = good drawing (hopefully). It’s one of many goals.

Do you think your personal narratives, because of your interest and obsession with cartoons, makes sense for you to add those cartoons in as character substitutes?
That’s tricky. I was actually thinking of this after an interview I just had, a lot of the stuff I am doing right now isn’t this whole cartoon thing anymore. I am starting to experiment and wander into different places. I don’t have any major solo shows coming up this year, it is just a handful of group shows, so I am starting to screw around a bit. For the longest time that is what was happening. Just latching these stories into this cartoon language I was developing. Generally it is my own appropriation of stuff I am in love with. I will still do things like that in the future, but right now it is really up in the air. But yeah, it always seemed like the obvious move to make. I hate drawing people realistically, I prefer wiggly, bug-eyed versions of them. 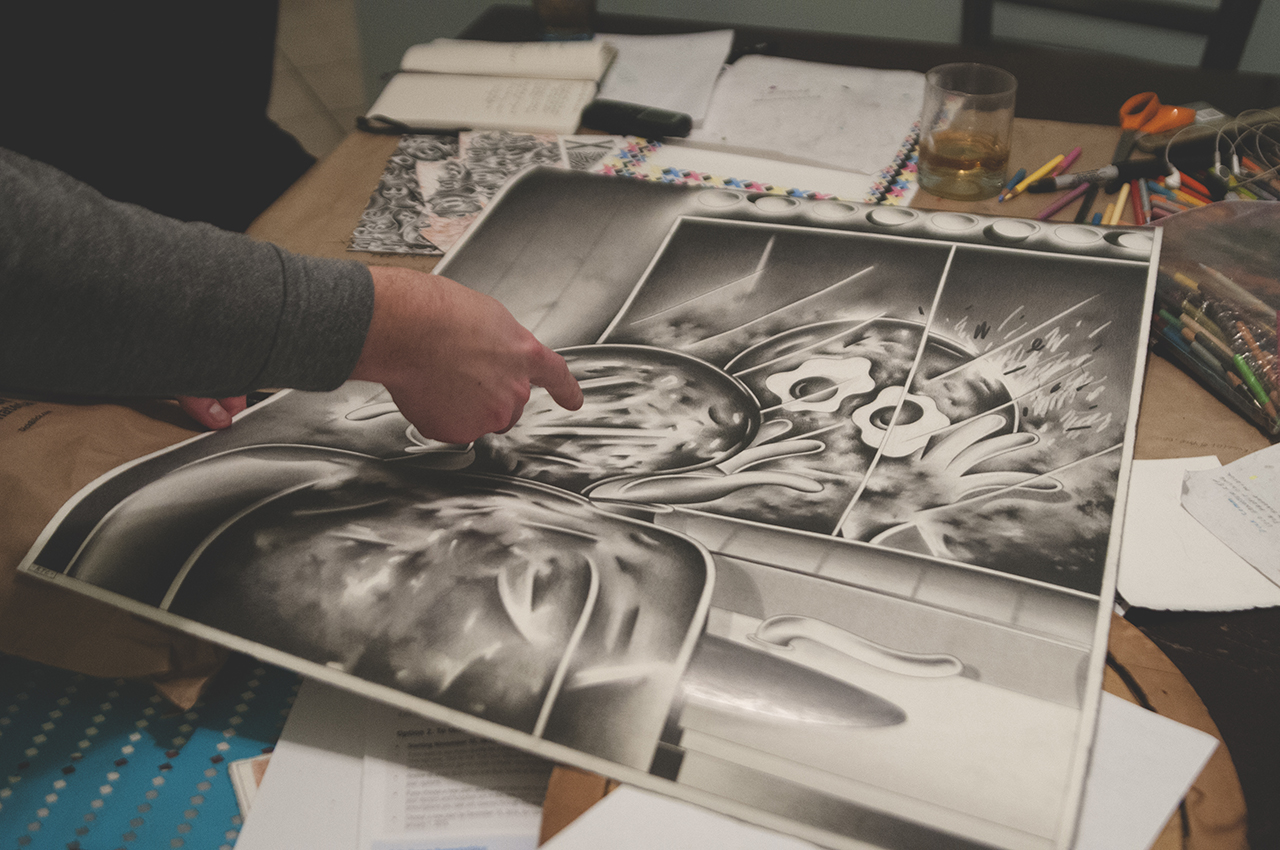 Why are you drawn to the suburban life influences that creep into your drawings?
I have never spent any time living in an urban environment—I have basically lived in the suburbs my entire life. In my older ages I spend time in cities now, but I think suburban life is more interesting to me. In the city you have this mish-mosh of cultures and so many things going on. To me it becomes difficult to observe exactly what is going on as opposed to the suburbs where I spent most of my formative years. It is a lot easier to pinpoint exactly what is going on. It is this middle ground that is not urban or rural, you get assaulted with a lot of this cookie-cutter housing and people fitting this type of look. You see the same exact thing repeated each mile. On the imagery side of things, I do a lot of drawings of houses or picket fences and brick walls, and cutting the grass—just really mundane things like that. I think the pattern comes back into that. I am not making drawings about Blockbuster Video and Subway being on every block, but that pattern was always evident to me. As well as the housing structures, a new neighborhood was always the same pattern. None of the work is totally about the suburbs, it is just another element that I am drawing from. It is a tool for me to use, the same as abstraction and cartoons. It is part of my palette. I have all of these different things that I can borrow from that I am interested in. 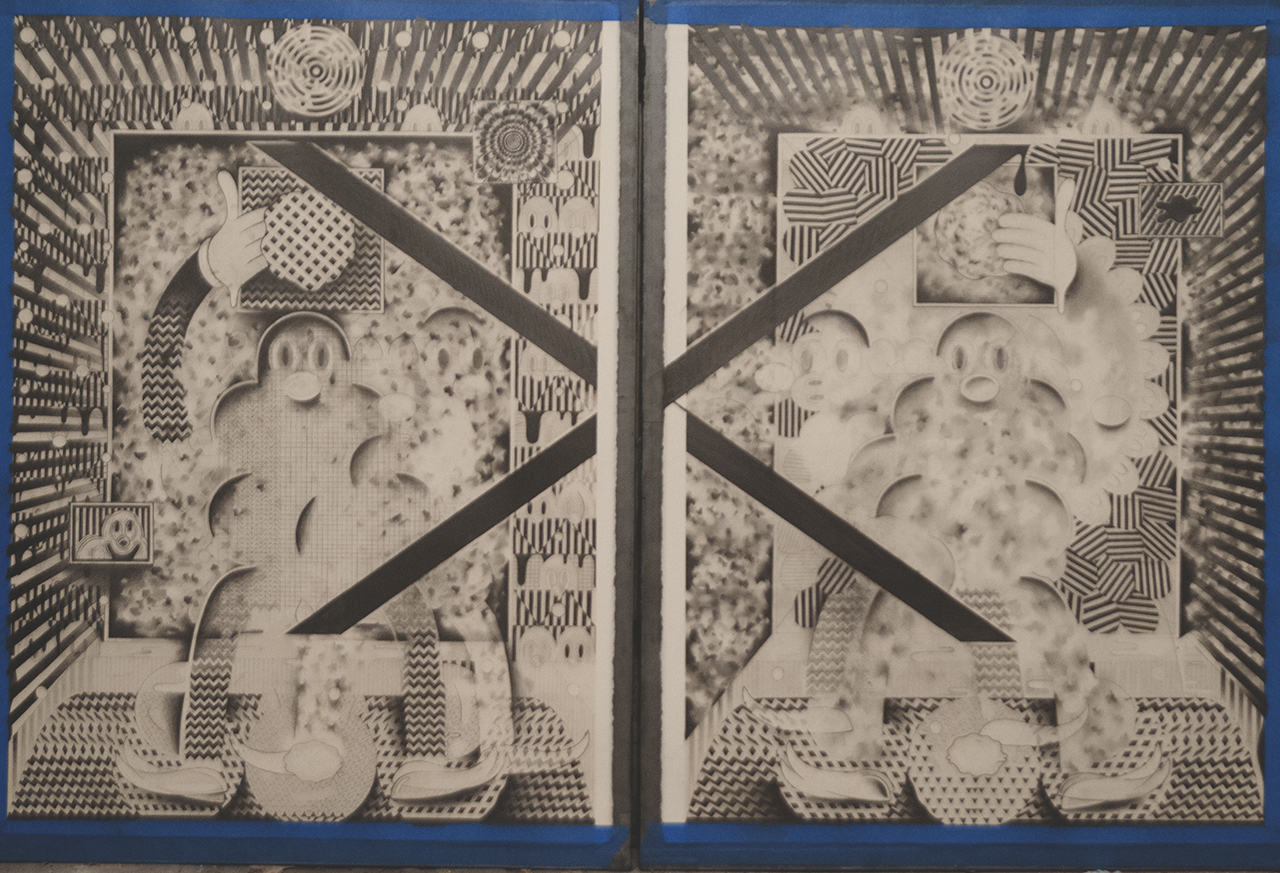 Do you feel like your sculptures are 3D realizations of objects that you have drawn in your previous works?
The hands are definitely, but I haven’t traveled too far into the realm of sculpture. I made a handful of these foam sculptures with goofy little faces on them at this museum show in Raleigh, and I’d say they definitely had the same feel as characters from the drawings. I have lots of ideas for sculpture that I need to tackle, it’s just a matter of time before I execute them. Ideally, yeah, I’d like them and the drawings to have a cohesive feel. 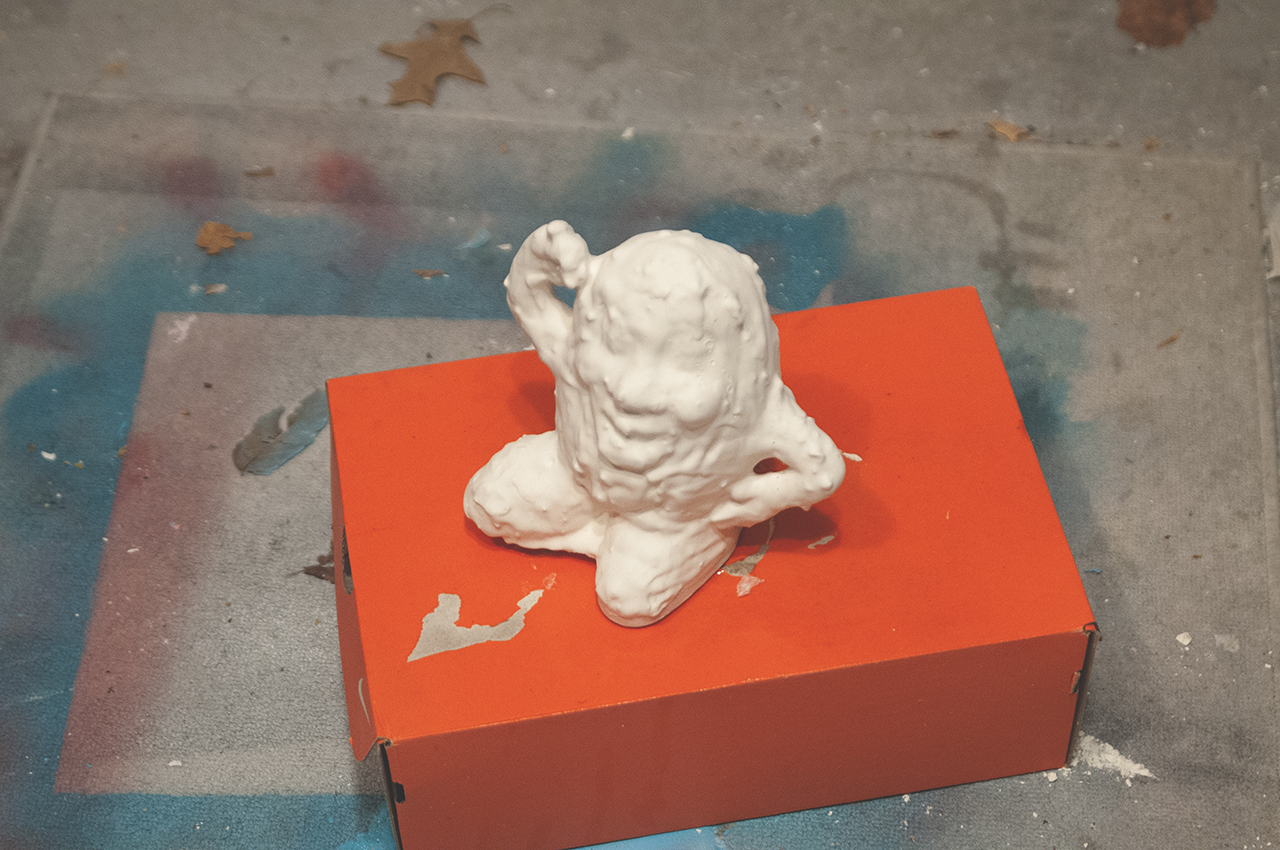