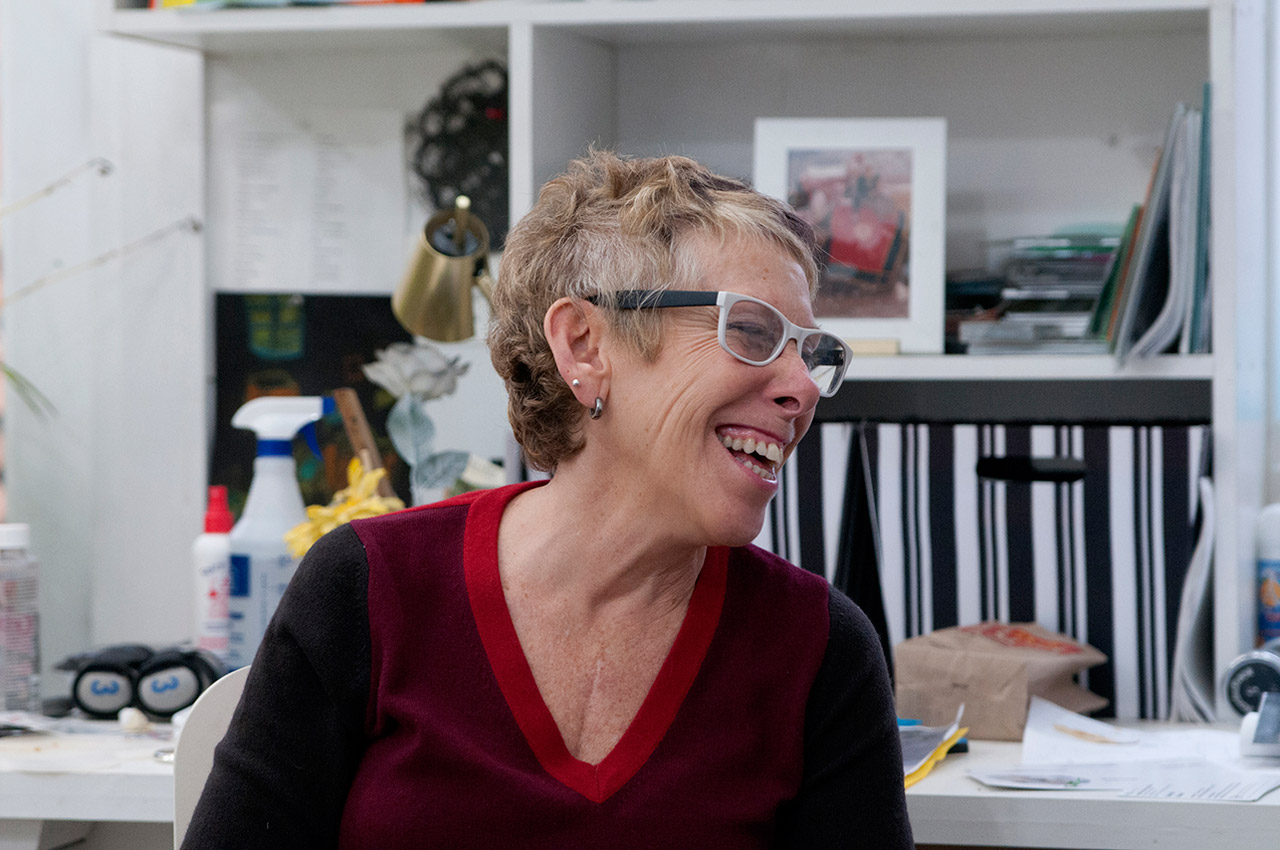 Surrounded by an extensive library, dog Alice, and endless cans of spray foam—Sabina creates sculptures from her studio just steps away from her home and exhibition space, Terrain.

I\W: What does the incorporation of plant life in your sculptural work symbolize?
Nothing, I’m not using plants symbolically. I want to make objects that have multiple functions, like holding a plant, books, or lighting up a room. They are meant to be decorative and disturbing at the same time. They are intimate objects that need a job and the jobs they need to have are household jobs. I think it’s funny to make elaborate planters or lamps that are also paintings and sculptures, but there is also something frightening about my objects—they could start growing on their own and go out of control. 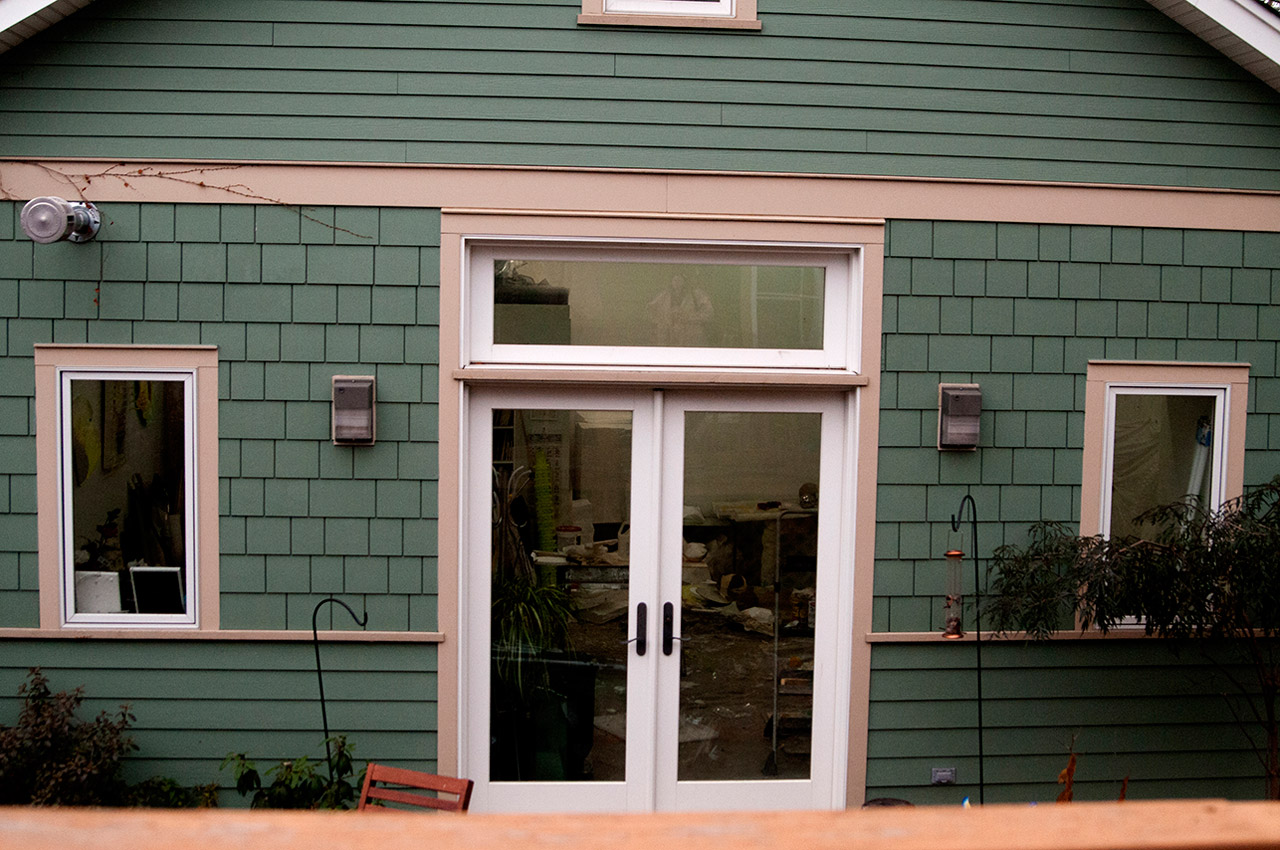 Your work often combines things that shouldn’t be fused together. What is your reasoning behind this?
I have a really specific language in my work, so the things that I do fuse together are very carefully chosen. It’s not as surrealist as that. For instance the spray foam that I have been using a lot of lately—it’s supposed to be inside your wall. It’s not supposed to see the light of day. It crumbles, it falls a part. I like the idea that it is outside the wall, and not only that but it has multiple functions too. It also becomes a line and a gesture and then becomes a surface to be painted on. It has multiple things that it does all at once. It’s only a material like that—a liminal in-between material—that could do something like that. It’s not a real thing. 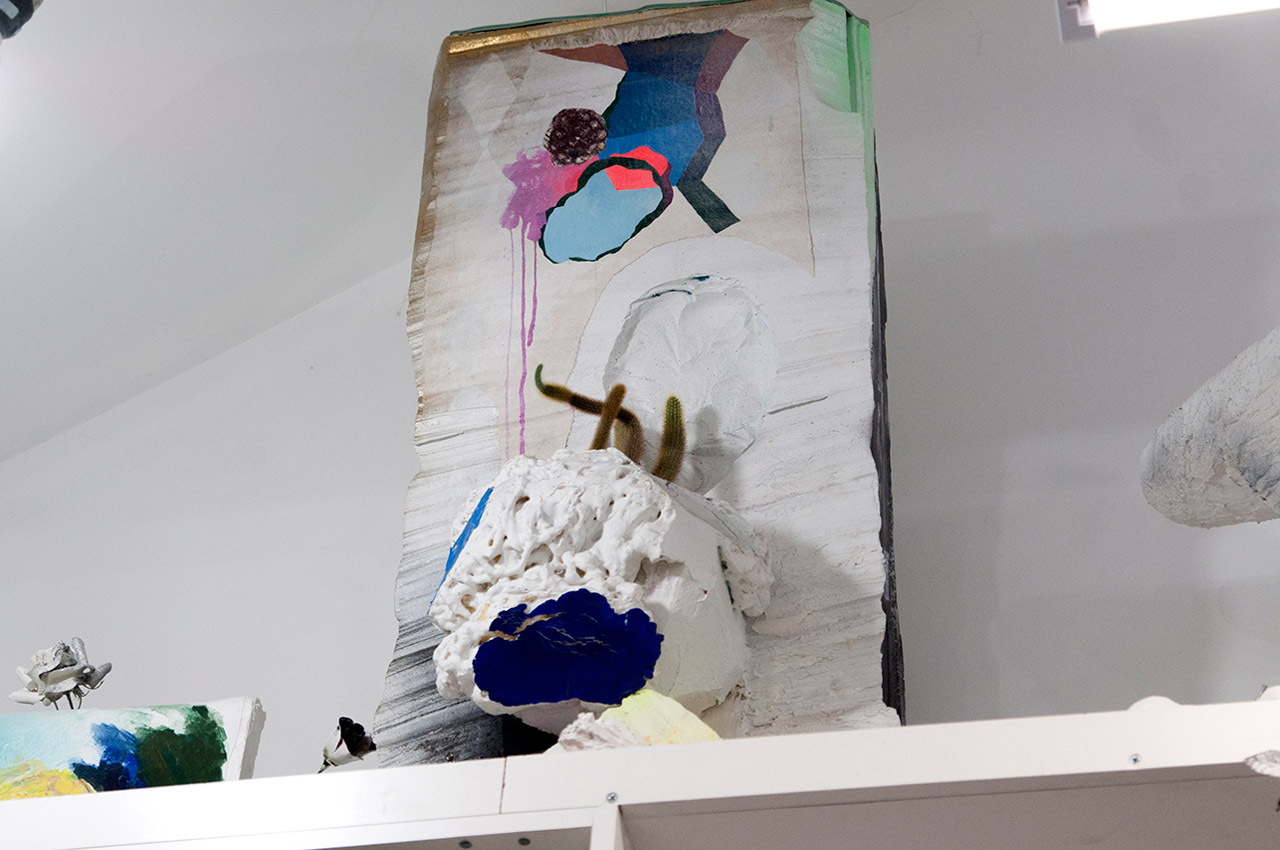 How did you become inspired to begin working with spray foam?
I made my first styrofoam sculpture for a project at Wot-It-Is, a home gallery operated by Tom Burtonwood and Holly Holmes. A video was projected onto a foam sculpture. Michelle Grabner saw it and liked it and asked me to make something for her project, The Poor Farm. I ended up making a big pond/ fountain out of styrofoam—it looks like a snowcapped mountain. You can sit on the edge of it and relax while the waterfall is spritzing. All the sections of styrofoam had to be glued together and I found that spray foam is a perfect adhesive. I had never made anything like the fountain before and I put it together intuitively. I had 8x5x4 foot blocks of foam and carved it with a hot tool. The spray foam fascinates me – it’s a liminal in-between kind of material. It’s nature is fugitive. I love the way it works as a glue, part of the armature, a form itself, while evoking so many references to home and craft.

What is at the core of each of your recent sculptures?
Since the mid 90s I’ve been playing with the idea of vulgarity, and using things that are in direct argument with the tenants of good taste. Craft and hardware store aesthetics embody a connection to the everyday that becomes transformed into fantastical configurations. I want to make monsters.

I want to make objects that have multiple functions, like holding a plant, books, or lighting up a room. They are meant to be decorative and disturbing at the same time.

Do you spray paint your sculptures?
Because spray foam disintegrates with light, it has to be covered. I’ve been painting the entire object heavily with white exterior paint to seal it from the light and make a gesso-ed surface. Then I use spray paint, oil, gouache and flashe, but, yes, lots and lots of spray paint. Some times I use burlap or canvas and attach it to the foam and sometimes I use gold leaf. My materials list could read “made-from-everything-found-at-Michael’s-art-supply-store.”

What is the value in site-specific work in relation to painting?
I found it exciting and challenging to paint during a period (’80s and ’90s) that focused heavily on photography, video, and installation, but at one point I remember traveling in Berlin and as I went to numerous galleries it became obvious that photography, video, and installation were now as academic as traditional painting and sculpture were considered to be. That realization gave me permission to play with those mediums and explore their relationship to painting.

I really liked the idea of using a two dimensional work, a painting, to generate spacial relationships. I don’t use found objects in my installations. I make constructions that I use as elements in a space. Initially, I was thinking of how the whiteness of walls embodied an idea of pure structure and how embellishment is seen as a corrupting element. So, I would begin an installation by picking a painting I had made and painting the walls of the space the same colors—using the painting to generate the color and forms that populate the space.

My goal was to make a space that felt like the inside of a painting. Eventually my access to spaces to transform became limited, so I started to make white (ish) objects that are paintings and furniture and sculpture all at once, hoping that they interact with the whiteness of most walls and make the rooms they were in site specific installations.

I started thinking of the whiteness of the walls—that is the standard. What if I made objects that became part of an installation. So instead of the walls changing to meet the art, the art would be merging into the space no matter what. The walls in places are usually white, and you can work off of that. 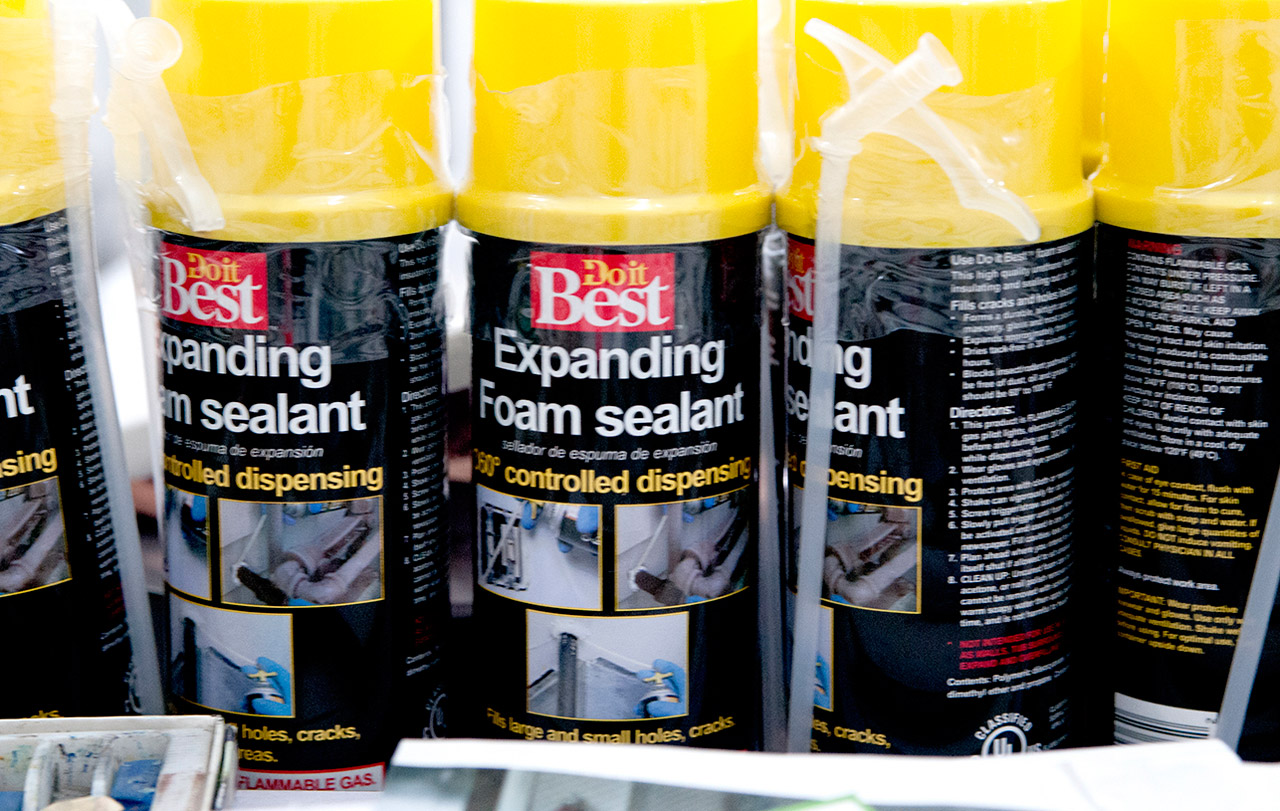 When you curate a show, how do you separate your own aesthetic interests from the show, or is that necessarily needed?
After running an alternative space called Jetwave with friends in San Francisco while I was in graduate school, I co-curated my first independent exhibition with artist Linda Besemer in 1992. We used a phrase from Tender Buttons, a set of poems by Gertrude Stein, as a curatorial inspiration, something that did merge with my own aesthetic interests. Usually a show I curate directly or indirectly engages issues I believe to be important, of course, but sometimes those issues diverge from my own artistic explorations. For example I recently curated an exhibition for the Art + Design Gallery at Columbia College Chicago called Construction (s) that focused on fellow faculty artists who make work addressing the construction of identity. It featured Dawould Bey, Myra Greene, Tau Huang, Wenhua Tsao, Melissa Potter and Fo Wilson. I’m interested in all the issues around identity, but my own work never directly addresses them. 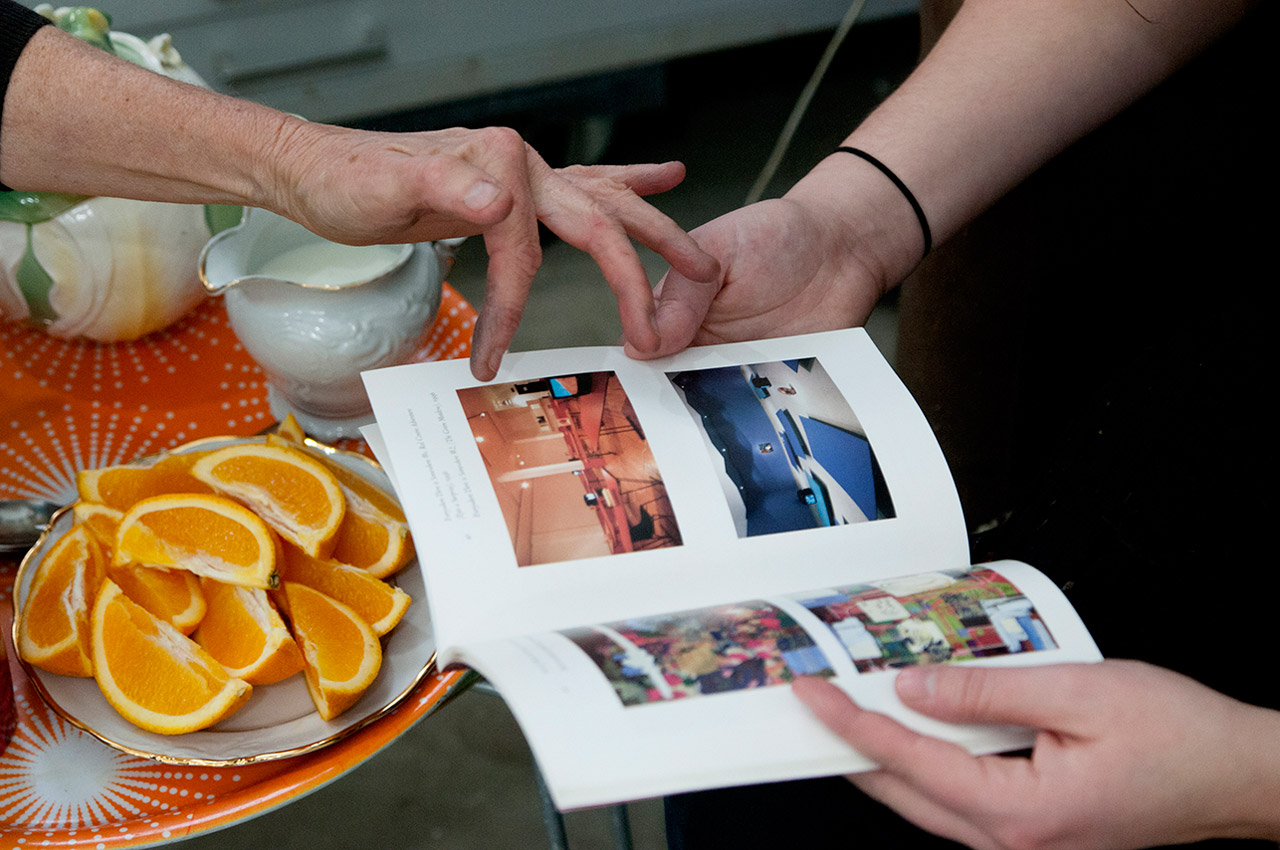 I was really proud of the exhibition Because the Night titled after the Patty Smith song. I sought work from a range of artists that engaged various notions of the night, either metaphorically or physically. For the catalogue I asked them to pick a poem they loved that had to do with the night, or darkness. They picked an amazing variety of things-song lyrics, poems, and bits of fiction. It was a very beautiful show held at the Guggenheim Gallery at Chapman University in Orange County, CA.

What limits must artists adhere to when exhibiting at Terrain?
The artists are asked not to block the windows or porch because we just get too depressed without access to light as the inside of the house is very dark. Other than that almost anything goes. Objects get screwed to the shingles of the house or bulge out of the porch to the yard—one artist, J.C. Steinbrunner, inserted ten working mailboxes into the front yard and the post office collaborated by delivering letters to each box. 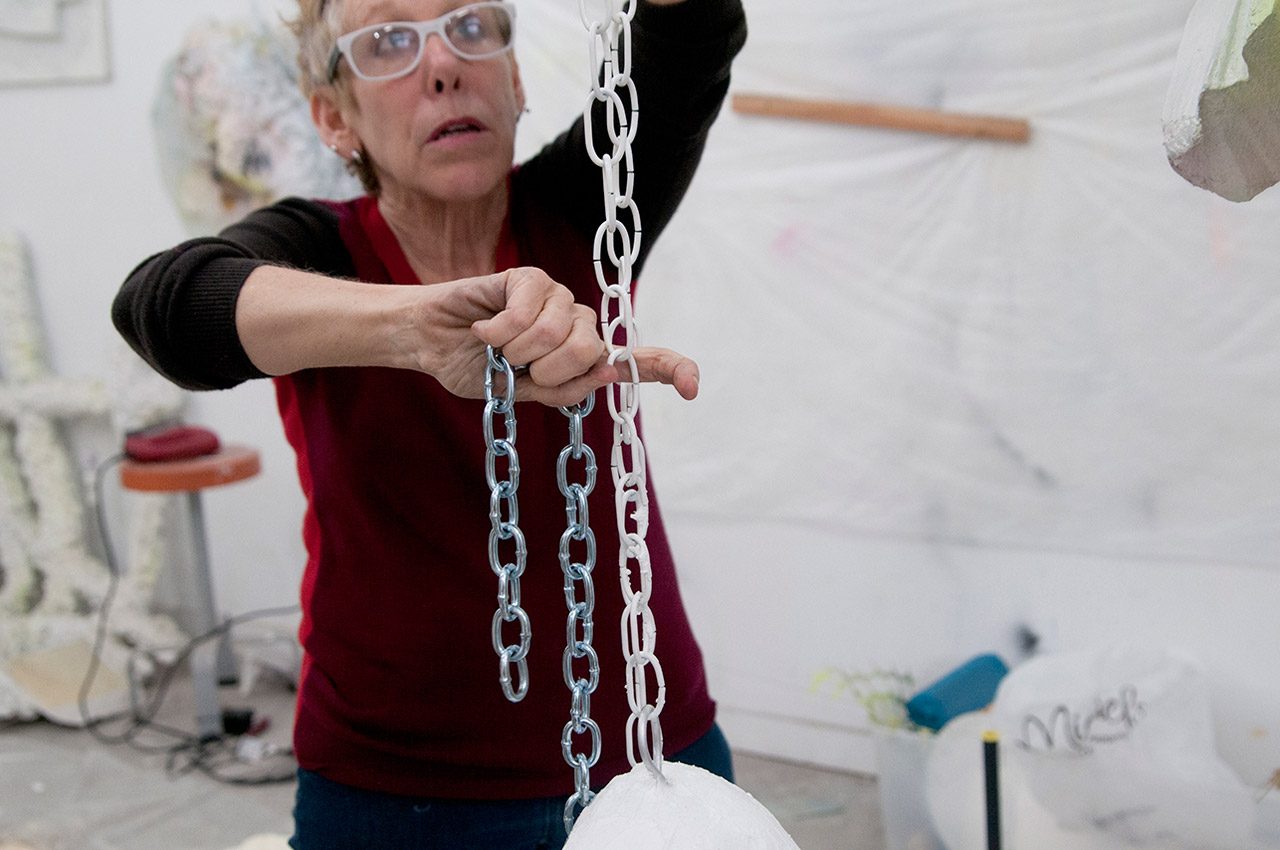 Children aren’t the typical audience for art, but since you are directly across from a school, they are kind of forced to be. How does this influence the art?
When I invite someone to do a piece at Terrain, I make sure the artists understand the context. In some cases, Terrain is the first experience a neighborhood child will have with an artwork, so I‘m happy when a project inspires curiosity and amazement. 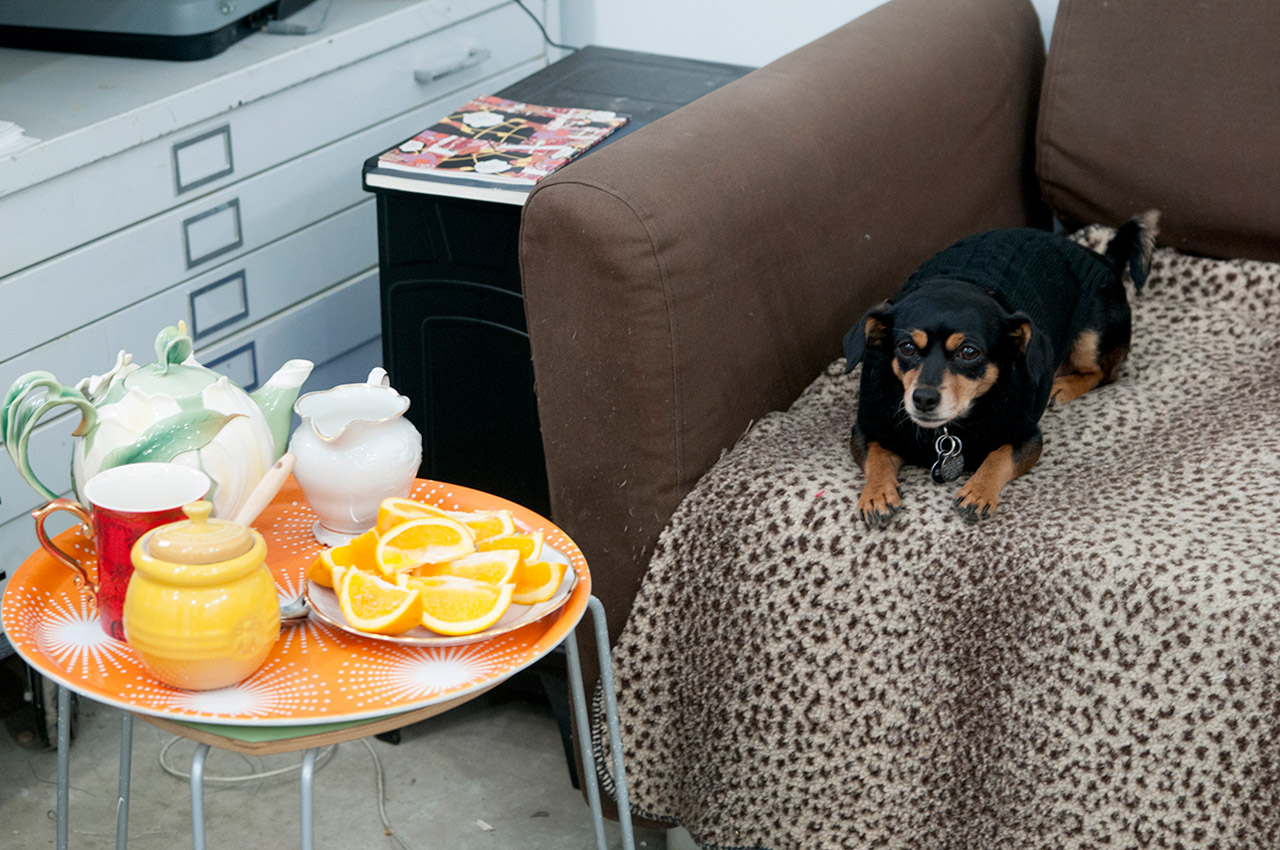 I do ask artists to avoid overtly sexual content and focus on critiquing suburban conventions, playing off of the neighborhood environment or architecture of the house. A mom down the street told me that her child burst into tears and refused to walk by the house because of one installation, and another said that her kid had to walk by everyday to check on what was at the “funny house.”