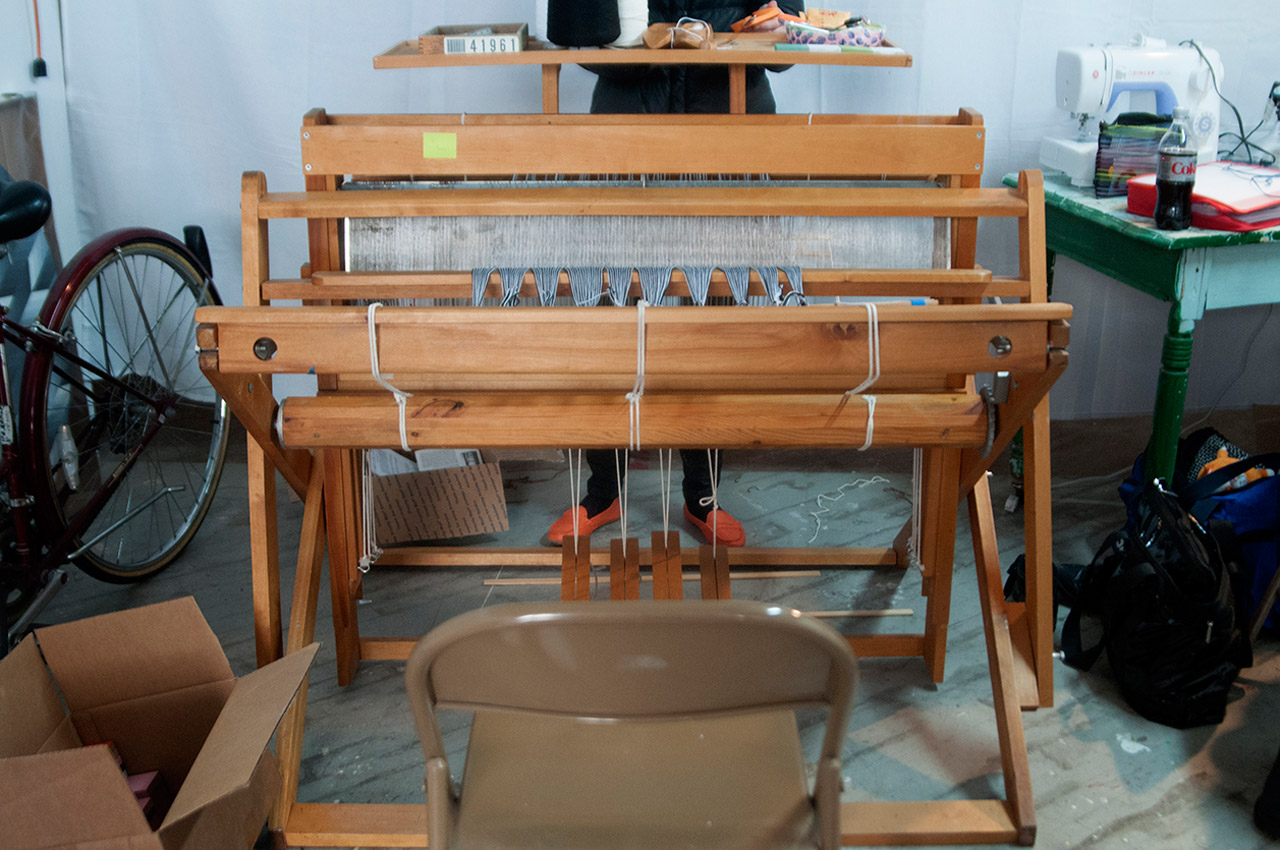 Samantha has traditionally created weavings and paintings out of her West Loop studio, but has recently moved her practice to incorporate small, unfixed tiles. The tiles remain separate, coming together to create site-specific patterns originally inspired by the weavings that she still creates on her in-studio loom.

I\W: Did you handmake each individual tile?
SB: Yes, they are all handmade tiles. I have made around 8,000 of them. They started off as being just an enlargement of a weaving which is based on a grid and a series of squares. That idea became less important, them being a weaving, and now I am thinking of them as more of a handmade floor sample or prototype. Right now they are sculptures, but potentially I would make an entire floor with them.

How long does it take you to make each tile?
I can make a whole set of tiles (an 8×8 foot square), paint them and set them up in about four or five days—which isn’t much time. It took me an entire month to do the first one, and then it took me one more month to do six. There are six or eight sets of these tiles, and then I can rearrange or reconfigure them based on a type of patterning. There is a relationship to the pixel and there is this relationship to data and data imagining. There is a clear reference to Carl Andre sculptures too. All of those things coming together and the idea of this individual thing being a physical piece of data or a bit. They are pieces of language. 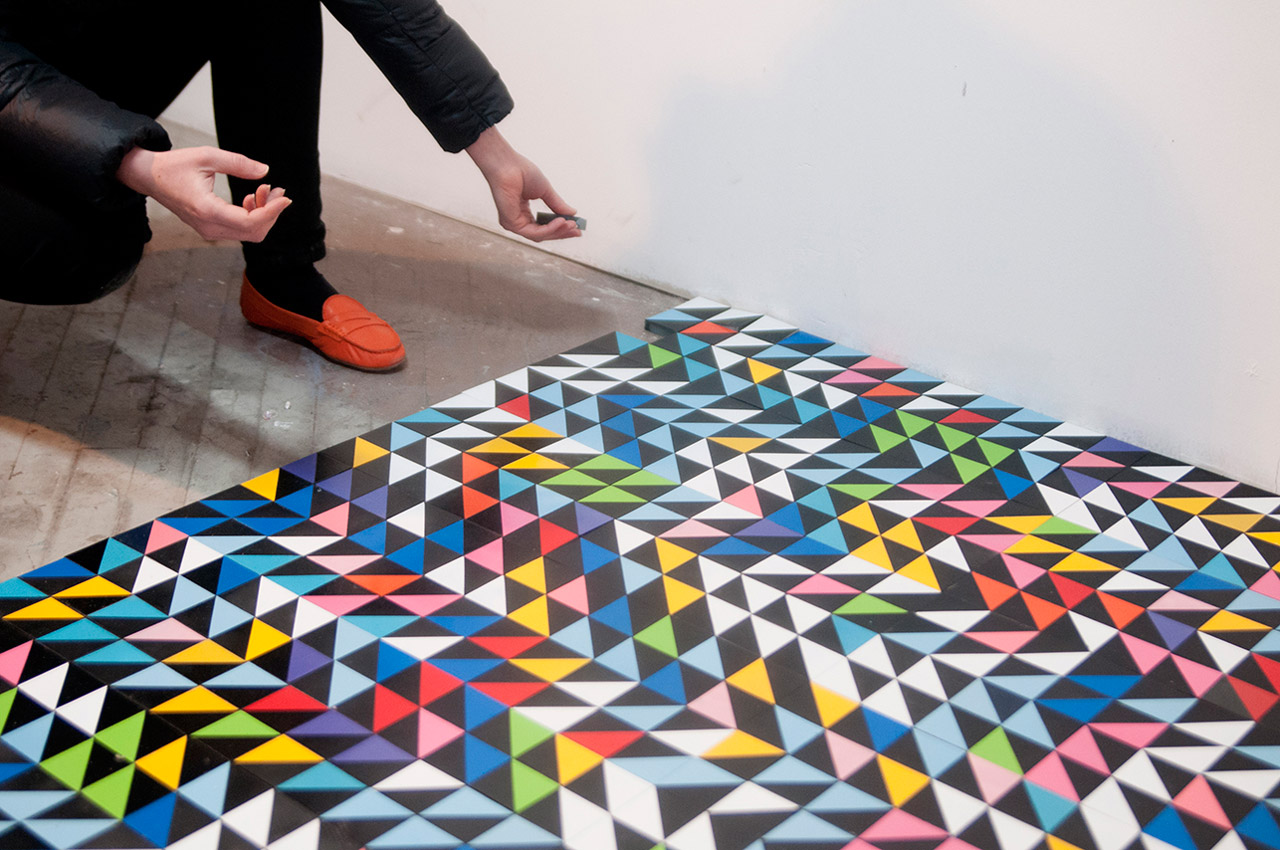 The craft aspect of the tiles was also really important to me. I could just go and buy prefabricated tiles, but I wanted them to be made out of art supplies and be in this neutral place where they are not necessarily bathroom tiles. I like the idea of play. I was using weave drafts to make some, which was basically following a set of instructions to lay them out on the floor. We had an open studio day where the public came and walked through the studios, and I had some laying on the floor. These kids were just playing with them and making some really cool patterns. I didn’t ask them to play with them, it was just intuitive for them to pick them up and start arranging them. I was also looking at quilting which is much different than weaving. Weaving is very fixed, but quilting is much more pictorial. It is following less rules. I realized I could just let go and be more free form. 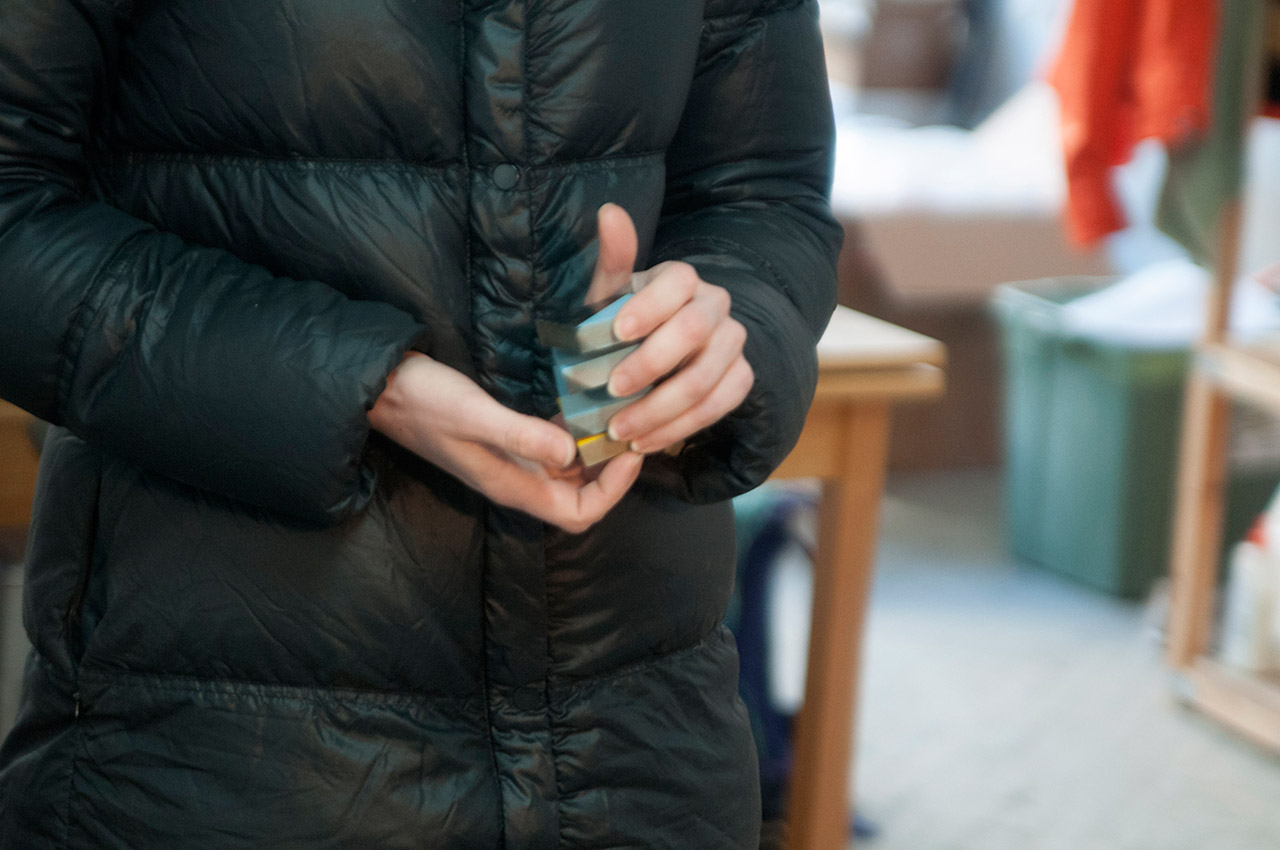 Since your tiles would be considered endless arrangements, how would you title them when you showed them, or would you?
I think I would like to because I would probably want to give it a direction in terms of how to locate it. I haven’t necessarily decided on what that would be. Right now it is something around flooring prototype 1 – 6, or flooring sample. I think floor prototype and then the number. I think a title that would suggest arrangement, or show how they aren’t fixed. Something that would suggest that it is this set, but arrangement number four. That might be something a little unnecessarily nerdy, but it implies that it is one possibility from the fourth time that it has been arranged. A lot of time when I show them together people ask if they are glued. It’s not just the end result that is important to me, but the way they can be taken a part and put together. This also has to do with site specificity in terms of exhibiting them.

When you are painting on your weavings you don’t use tape, but you utilized tape to create straight lines on your tiles. How is it going from free form to a stricter painting style?
It is just a different thing. With the tiles I am trying to design a method that is going to be as fast as possible. I like the crispness of the hard edge on the tiles. In the paintings, it is an important decision I am making not to do taped paintings. It changes the look of them in a way that is important to me. 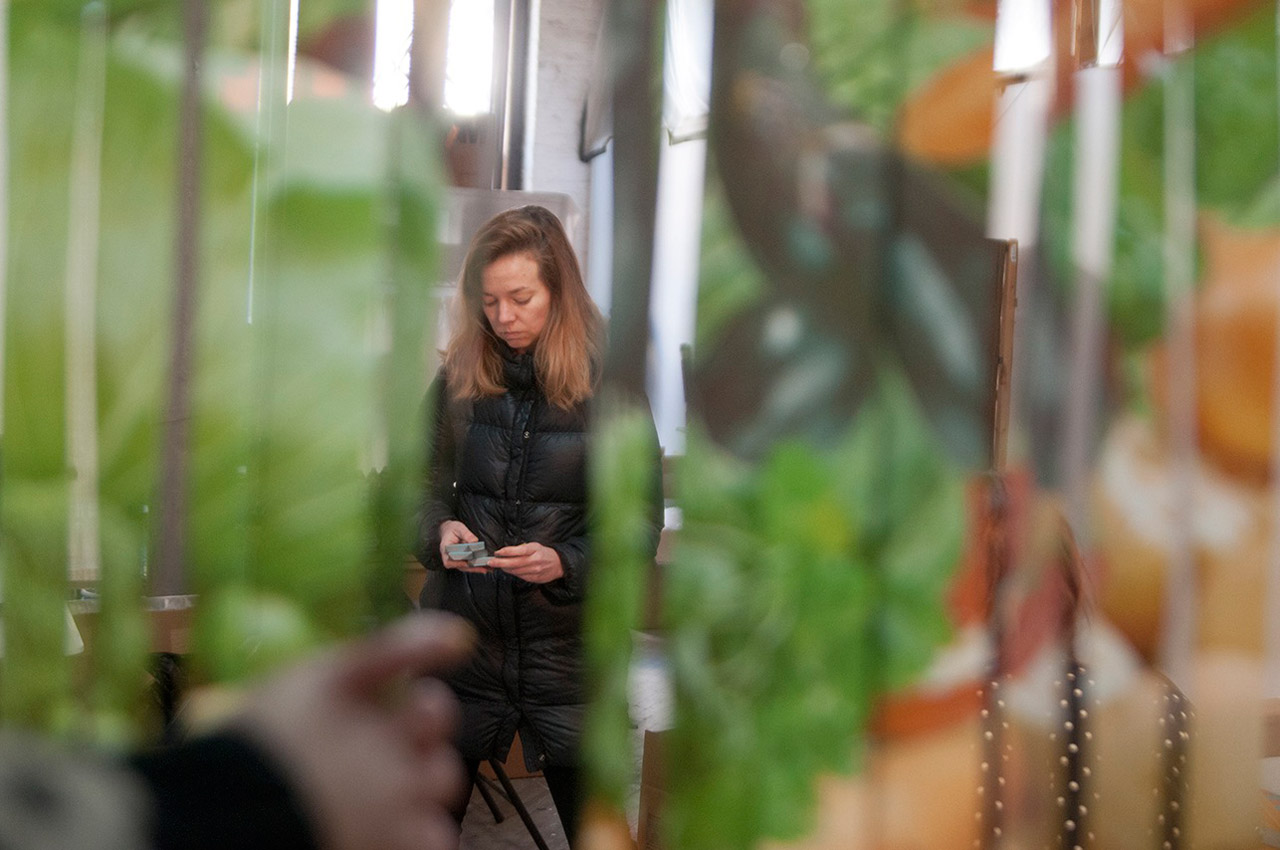 Can you tell me about you loom?
I have a four harness loom. It is what a beginner weaver would use, but I kind of like that because I like the simpler stuff. Some of the complexity is able to come through in my painting. It doesn’t need to be as technically fancy to do what I need it to do. 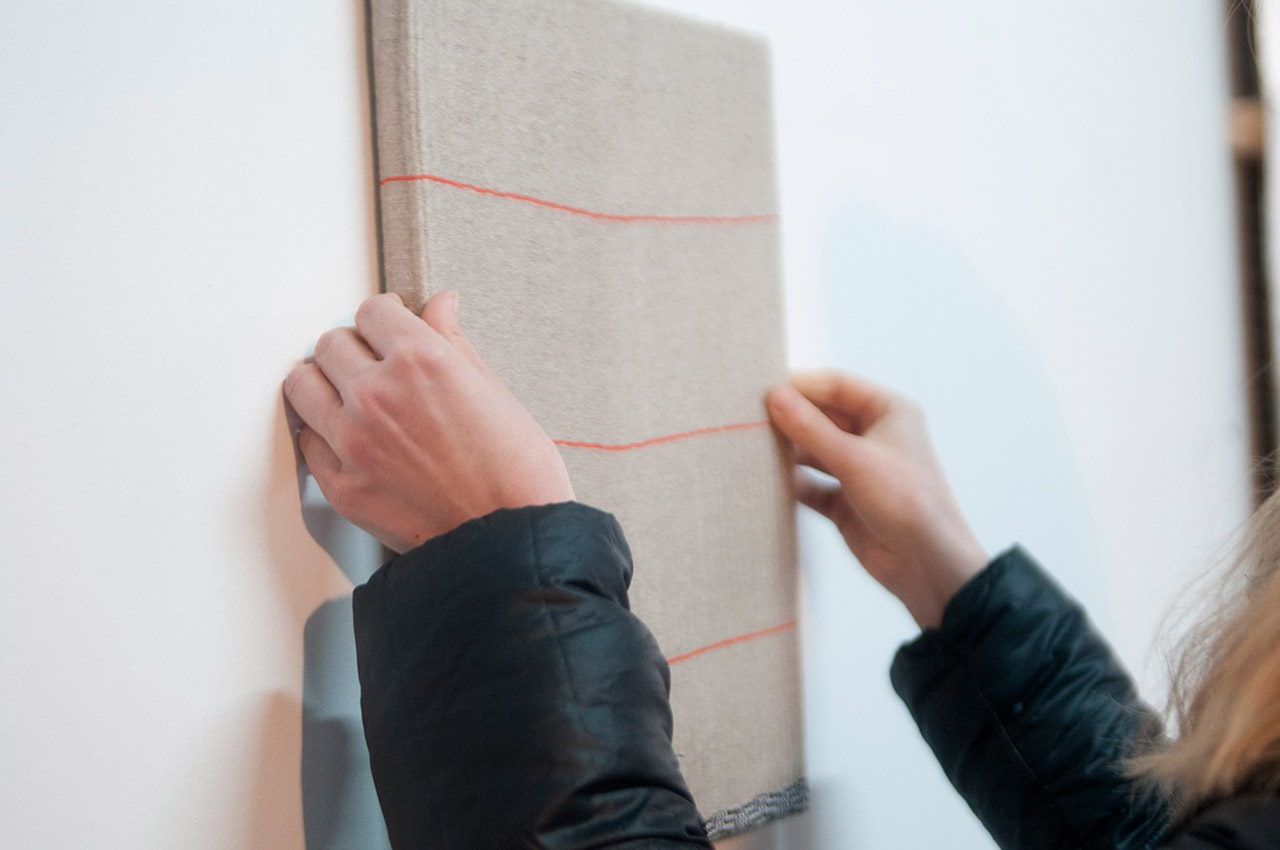 How have your pieces developed the qualities of optical illusion?
Optically the first works I did that had that effect were accidental, but I can’t say they were completely accidental because I was definitely into Bridget Reilly and James Turrell. There are different types of optical illusions. There is Op—black and white vibrating—and then there is also pattern recognition that is more cerebral. The first ones that I was making I wanted the painted surface to merge with the woven surface. I was thinking that if the contrast was as high as possible—which would be black and white—then your eye would see the contrast between the black and the white before it would see the contrast between the painted surface and the woven surface. I went that way, and they ended up being more complex to look at as a secondary surprise.

Do you feel like each of your works is vibrating on the same wavelength as each other?
I think they might be on different vibrations. Some of the works that I am doing now aren’t really as optically charged. I don’t think the opting is my primary focus. It’s something that I am totally into, but it wasn’t the drive for beginning this work. I am interested in it—it is one way of working—but it’s not everything. 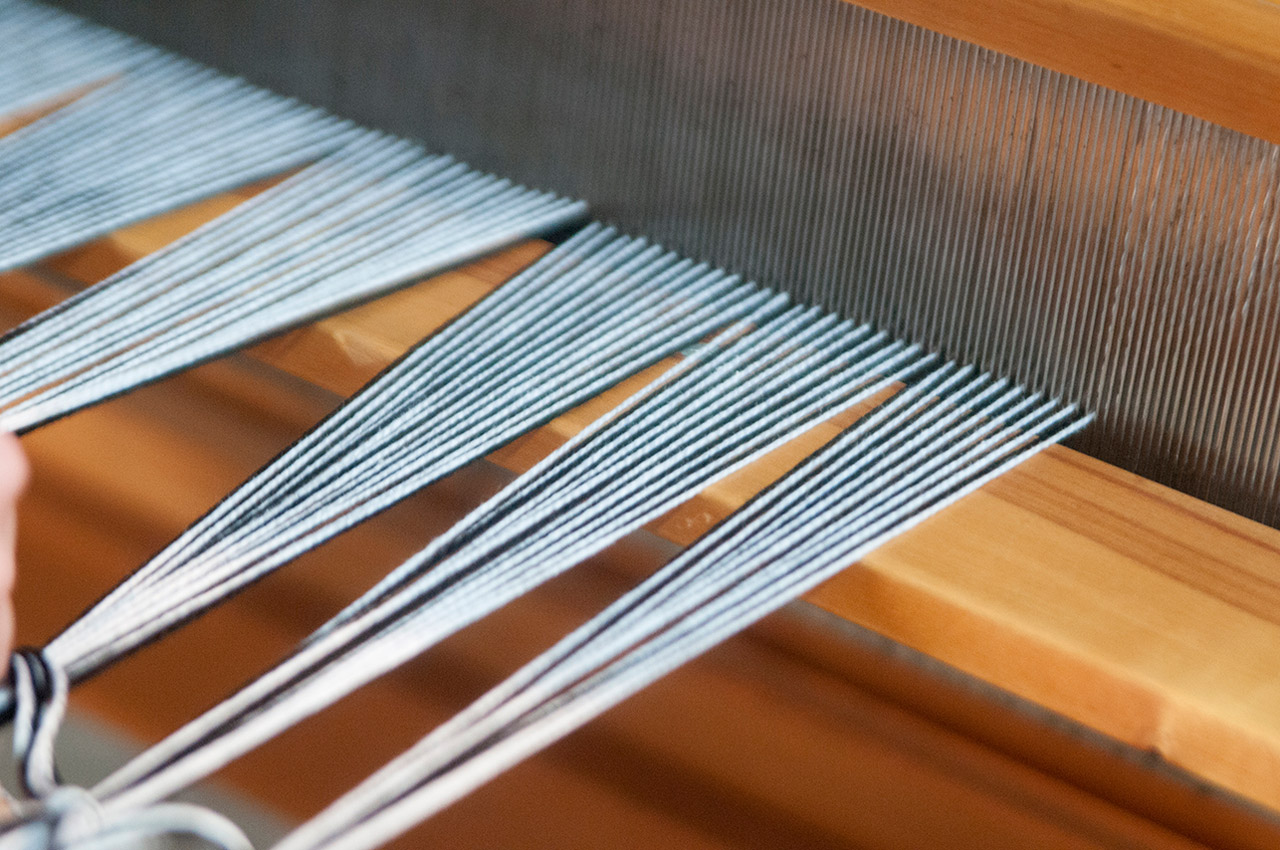 Initially the painting was coming in as something to interact with the weaving. The weaving couldn’t do what I wanted it to because of the limitations of the loom. Then the painting was stepping into play to make it more complex, or further what the picture is. They were both equally important in the creating of those works.