Sofia Leiby's Nostalgia for the Future 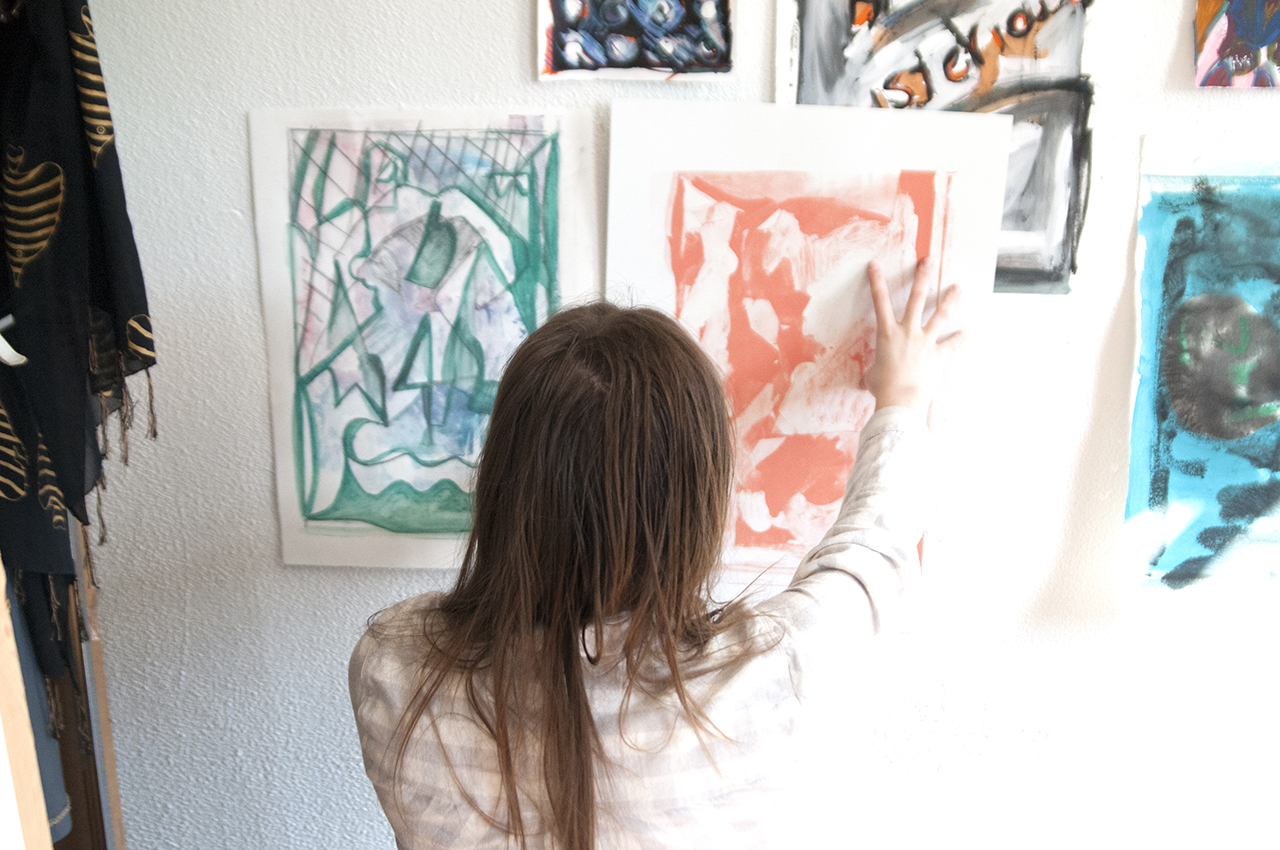 Sofia’s studio is within her Logan Square home, just beyond a make-shift wall that physically separates her studio from her bed. Casually entering and exiting the room’s divide, Sofia focuses on her painting practice which has increasingly begun to lean toward the personal.

I\W: Do you think your mindset has changed about your work now that you are in a studio that is not simply dedicated to your practice, but exists within your home?
SL: I think so, yeah. When I first got a home studio my friend said that it was going to kill my studio practice. I feel like it hasn’t killed it but I don’t go in and spend big chunks of time. I am going in an out, and feeling things gestate over time. I will go do dishes and then come back, and then go do something else and then come back. I feel like that is helpful, but I also miss the dedicated time. Weird stuff happens when you are trapped in a warehouse on the West Side with nowhere to go.

Do you ever feel like those monotonous household activities inspire your practice?
The process becomes homogenized. I will organize my clothes for awhile, then go paint. It makes painting not seem like such a special thing to do when they are so close to one another. But another thing I didn’t expect is the pressure to paint is intense when it is in your house. It is right there. When I would go to a studio, I would work for five hours straight two days a week. A lot of studio artists get in the studio every day, and I just kind of peek in. 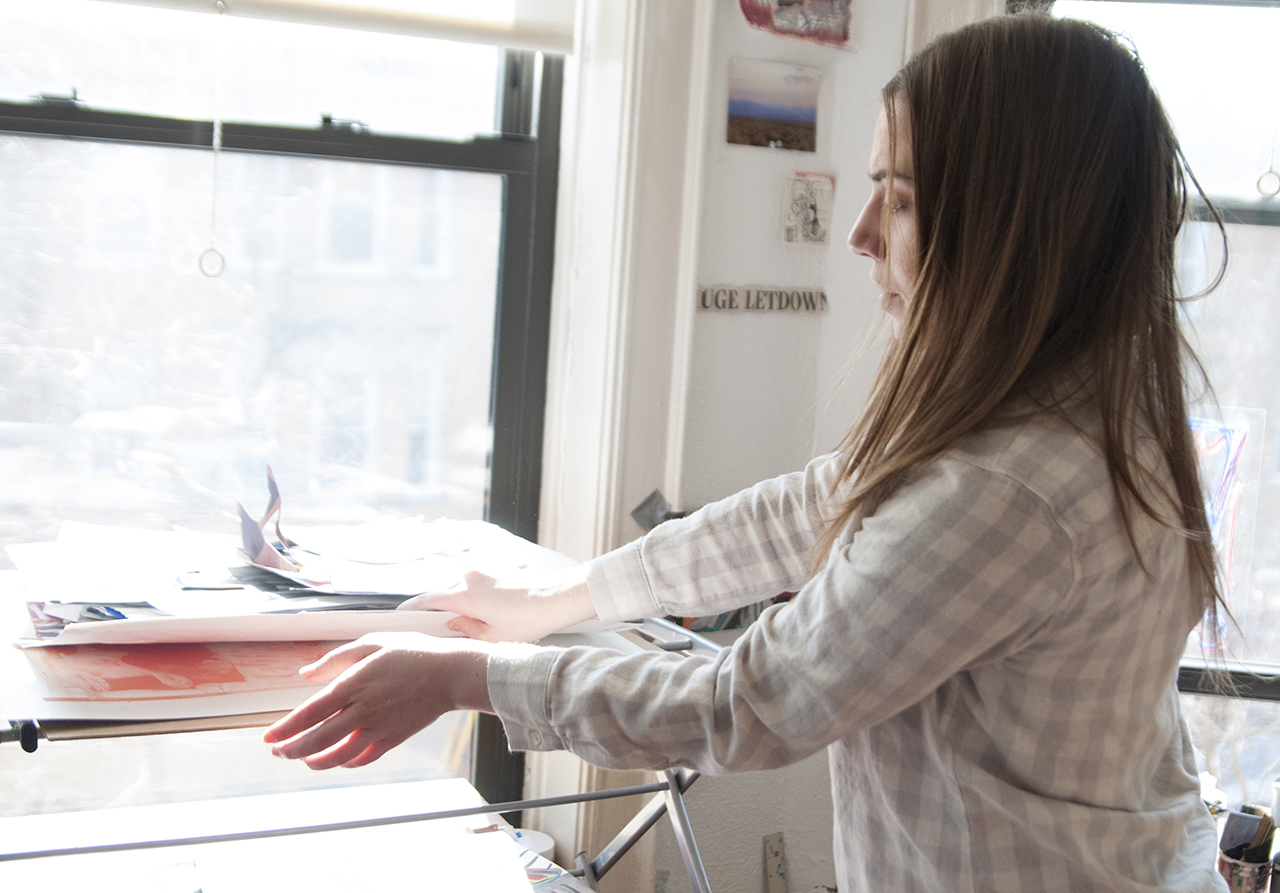 Will you tell us the concept behind your recent show, The Drama of Leisure?
I had been making these paintings and trying to think of them pragmatically in relationship to the things I was reading and also the fact that I was working full time. I decided I wanted to be really honest about my process. I am painting in this methodical way where I am painting from other paintings, from other paintings, from other paintings. It’s like I have a narrative that I am participating in— but I was feeling like it almost isn’t about that. The work is more about the way that you spend time, the way that painting can help you mark time. Having it at home played into that especially because it became another domestic activity in a way. I read a lot about art and painting and I also write criticism, so it started to drive me really crazy after awhile that I couldn’t turn off the critical brain. I decided I was just going to play and have fun and move stuff around. Having to morally justify that became my impetus. 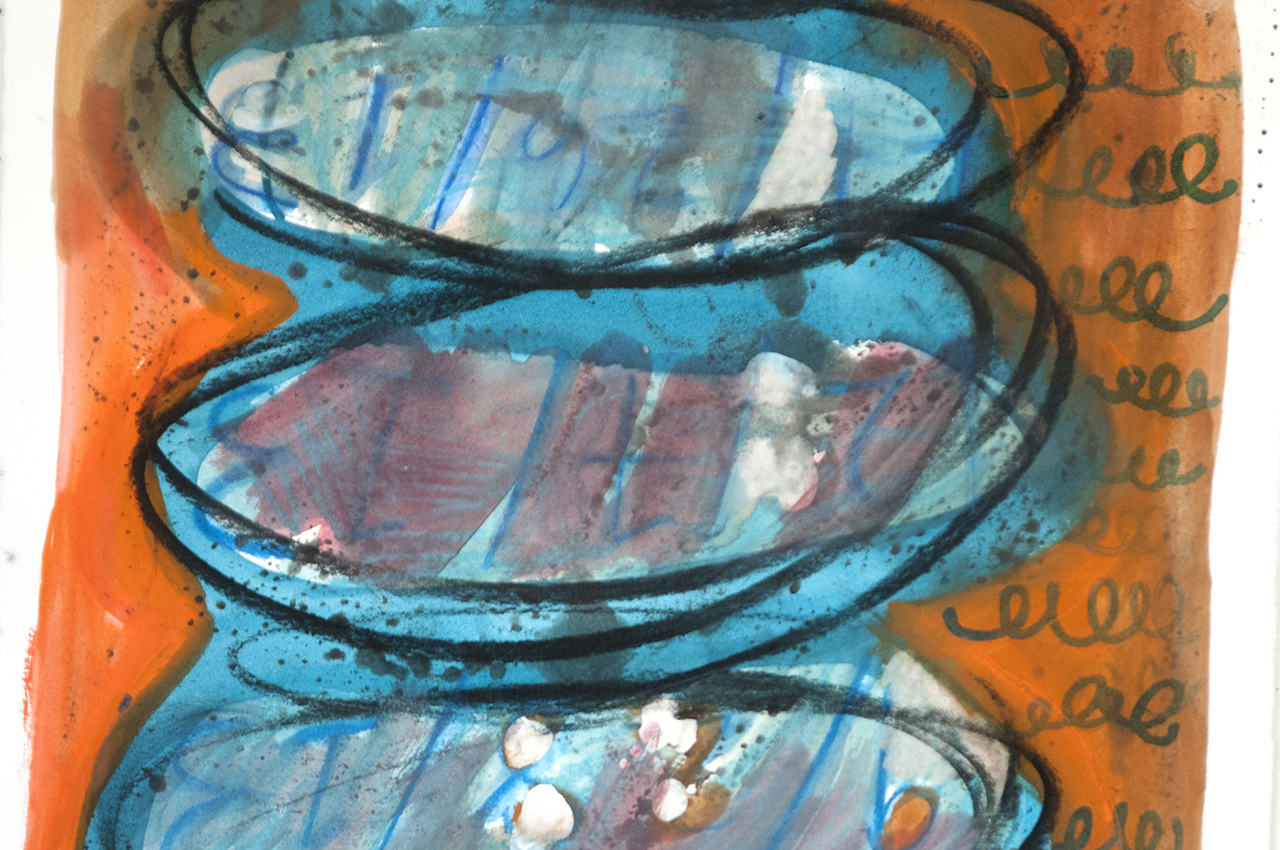 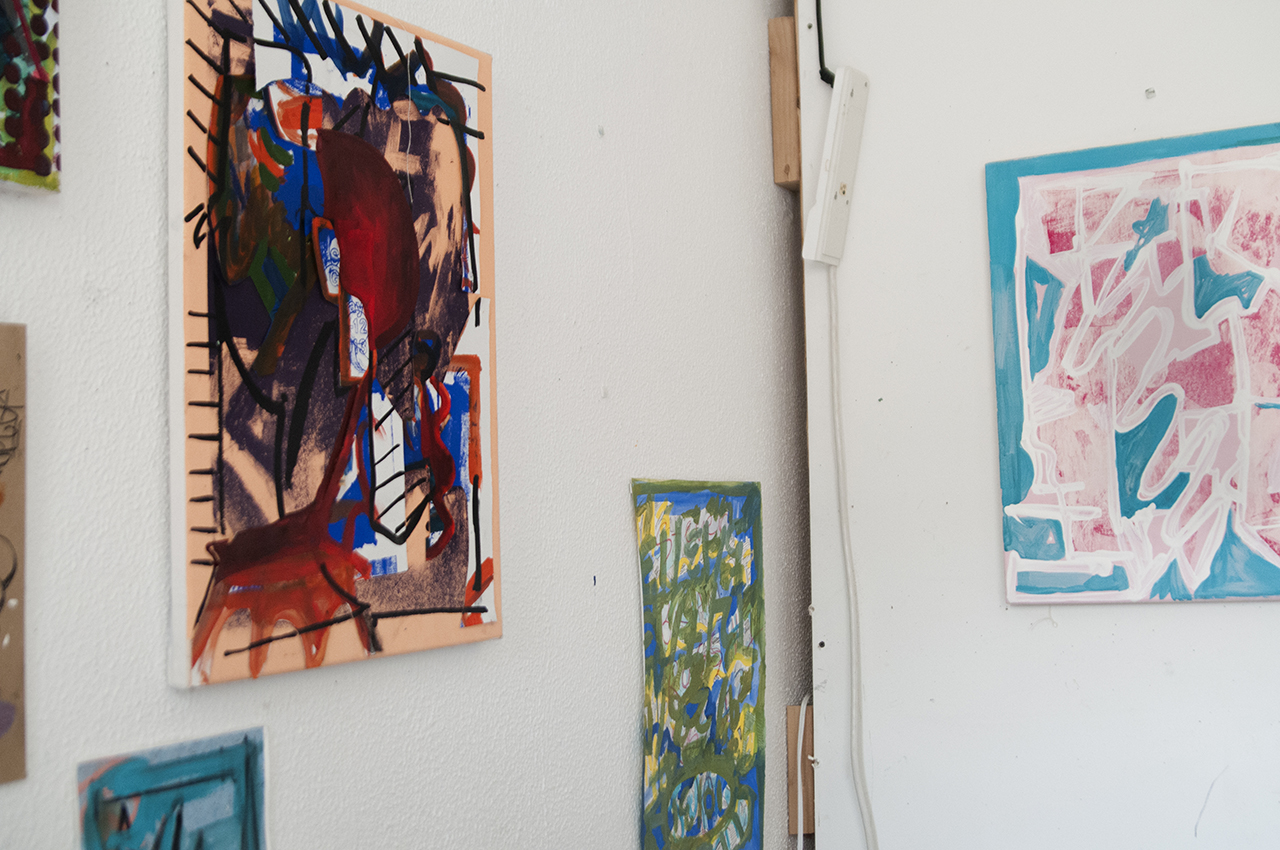 Do you allocate your daily commute time for something specific?
I used to try. I would try to read a book, or sketch, or take notes, but then that became a pressure too. I have to let myself not be creative sometimes. I should just be able to zone out and have those pure moments. I feel like that doesn’t happen very often.

How did you segue your printmaking practice into painting?
I think that happened in school. I was in printmaking and they would get really mad at me for not making real prints, or making an edition of a print. I didn’t see the need to make 50 of one thing unless I had a reason to do it. I was really frustrated with them, and they told me I took up too much space because I would always have all of these scraps with me. As soon as I brought a screen print into painting class, they loved it.

What is different about the way you approach a piece of paper versus canvas?
Canvas just always felt so weighty for me—it was just too serious. I wanted to make more stuff on paper. I feel like sometimes you just have to make paintings, and you can’t frame everything. I felt like the The Drama of Leisure had a lot of work that was pretty flat. It was one layer or two layers. I want to be more painterly and start integrating the layers a little more. I am starting to be a little messier. 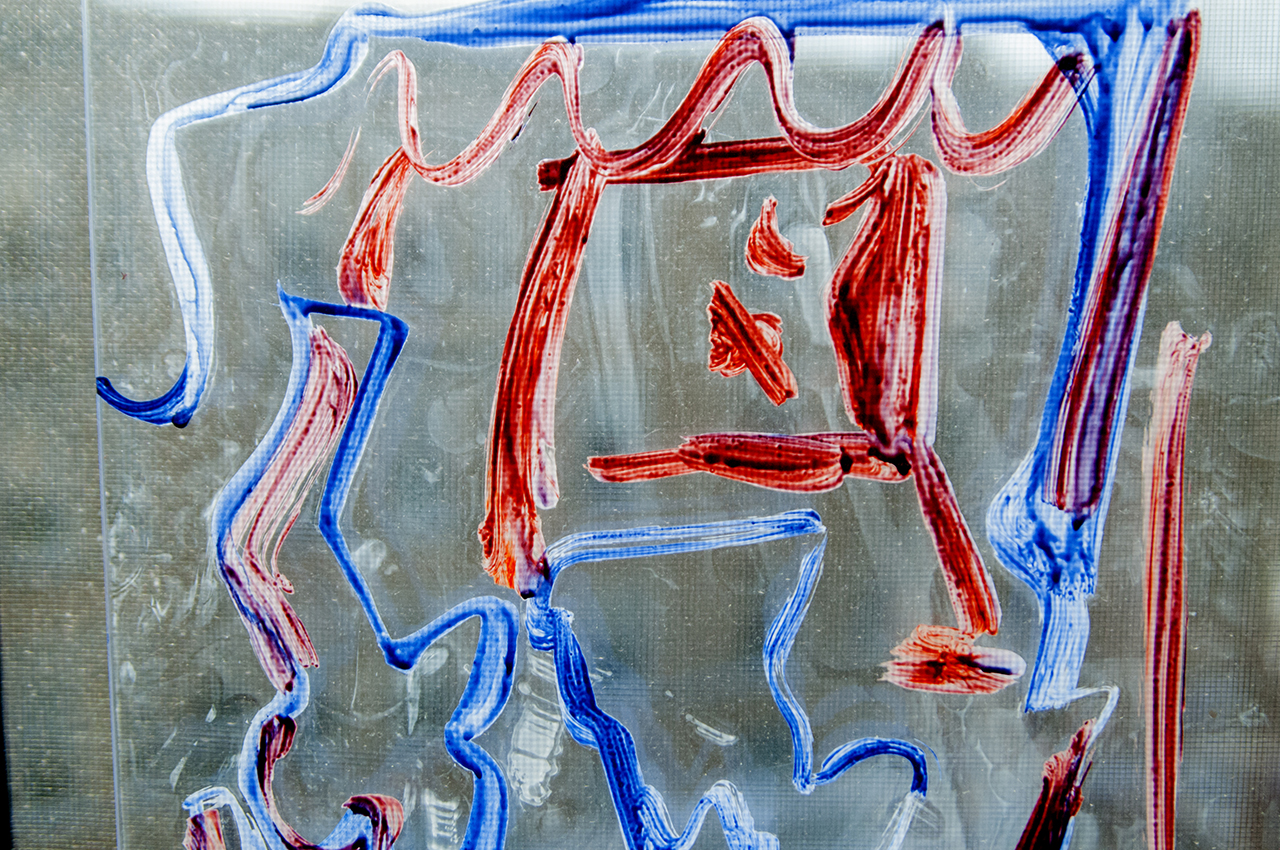 Will you explain the process of taking pictures of your paintings throughout their various stages?
I take one and then either photograph or draw it, and then start another painting based on that drawing. It’s kind of like playing telephone with myself. Why I really liked the chance to have a solo show is that I feel like everything works in relationship to one another. You can really start to see where the images start to change as they move through the pieces, and there is this kind of thread that you can see moving through all of them. In a group show it is hard to see the lineage.

So each piece you make has an element from the piece that was created before it?
Most of the time, yeah. The way that I confronted abstraction was that I couldn’t just come to a blank canvas. I have been really obsessed with this question of what the difference between a painter-painter and a conceptual painter is. Everyone tells me that it is not a binary, and those aren’t divisions that exist, but they totally do. People say that I am talking in this conceptual way about the fractalization of time and labor and the way it is divided up, but then you have these paintings that are more about painting—how do you bridge that gap? It is frustrating to me because where do they intersect? Is it such a binary? I am not a person that has an idea and executes it on canvas. I feel like that would be a conceptual painting kind of approach.

What hole do you feel your website Chicago Artist Writers is filling in Chicago?
Jason Lazarus and I were going to a lot of small galleries in Chicago that would have shows that were only up for a day. They were always so good, and nobody ever reviewed them. We would have these great conversations at the gallery or at the bar later and they wouldn’t go beyond that. Artists have a lot to say, and they are at a privileged position to talk about alternative, experimental arts activities. 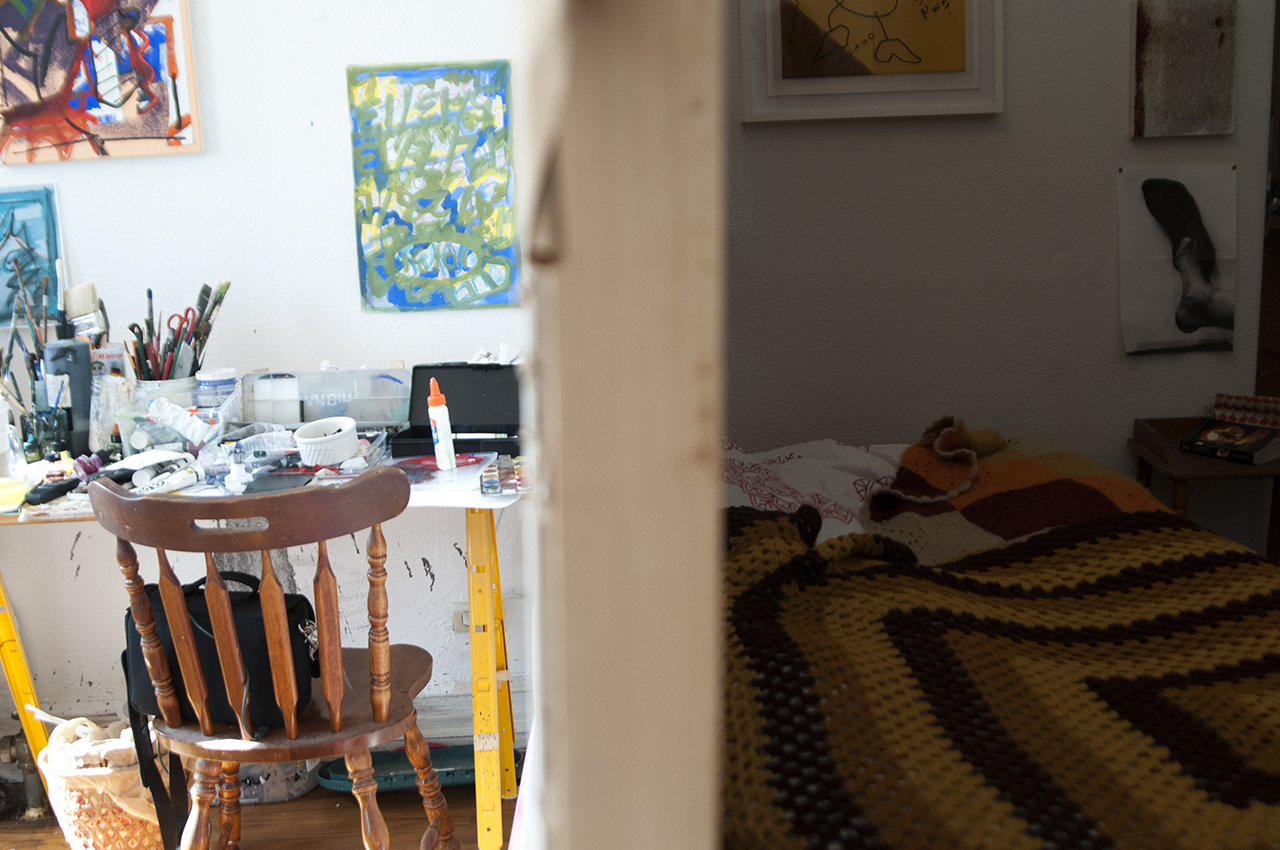 How did you come up with your twitter name (@metanostalgia)? It’s brilliant.
I feel like I am always looking back on myself and immediately turning everything I do into a moment to be remembered, and then if you are remembering about when you were nostalgic about something, then it becomes meta-nostalgic. You are being nostalgic about when you were being nostalgic. I am interested in nostalgia, and I made a couple of pieces about it a couple of years ago. I was fascinated by what makes a person nostalgic, because I feel that the reasons are not so easy to pin down. I always am thinking about the future when I am thinking about the past.