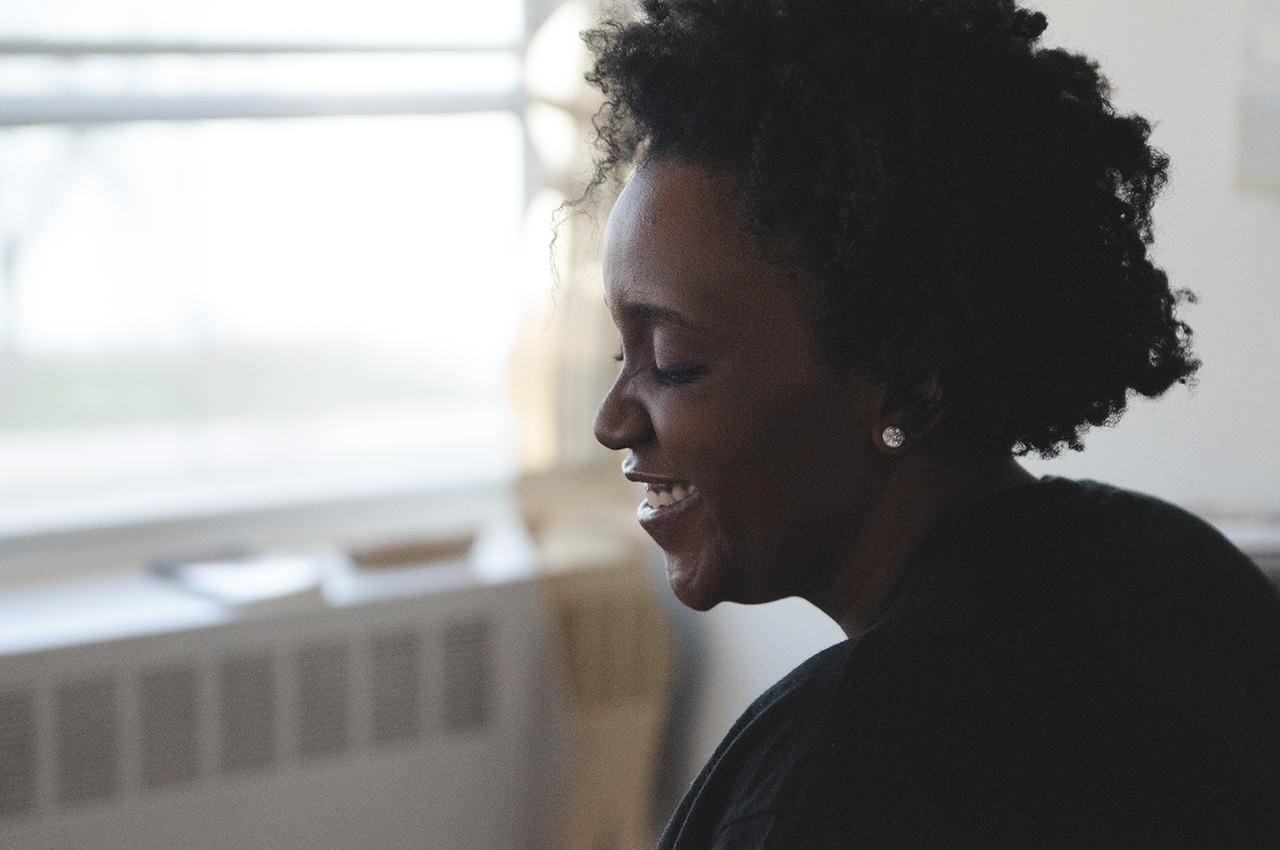 INSIDE\WITHIN and Danny Volk sit down with Stephanie Graham to discuss navigating church camp, slaying misogyny as the goddess Oya, and how she broadcasts all of the above on social media.

Stephanie Graham: Danny, are you ready to be made up?

INSIDE\WITHIN: How do you translate your lived experiences (as well as your friends’) through your practice’s lens?
SG: I recreate what has happened to them in my own way. From photos of an actual scene, to taking a more documentary approach on video. It’s pretty simple. Because I was introduced to art through photography, anything visual intrigues me. Creating photographs is at the base of my practice. With my project So This One Guy, I interviewed women from all walks of life, incomes, race, and locations as a way to collect a diverse group of personal narratives. I think it’s important that we understand that we are all different in some ways, but at the same time we are the same. Hearing the many stories from So This One Guy reminds me of when I was young and would go to church camp. There would be a mix of girls from my school—the popular girl, the goth girl, dorky girl, etc. The camp counselor would ask a few social and familial questions like “Are you close to your parents?” Everyone would bond over their answers because both their parents were divorced, or because their father left, or some other answer. There’s a similar goal with So This One Guy. It’s for young women to know that regardless of who you are, you are almost guaranteed to interact and sadly date a really wack dude.

I\W: Can you talk about your layered role in the Fella Project? What was it like playing the director, photographer, and both subjects?
SG: The Fella Project is an artwork about my own experiences. It only made sense that I put myself in the work and make it stronger by creating it from my own point of view. I’m sure if you asked these dudes I featured about the same situations they would see it in a different way, in fact I know they would. It is easier for the audience to see the real version if I am the one translating it— it is my story. I have the emotions and the backstory and can easily play it out. It’s also fun hearing people interpret the stories. From their interpretations I get to have many of my own memories triggered.

I\W: Does your day job as a set decorating coordinator on Chicago PD have any influence on your art practice?
SG: Not entirely. I view Chicago PD and my artist practice as two different things. I am fortunate to have a position on a successful TV show as after all my degree is in film. It’s great that I work in a field in which I studied, and it makes my folks happy as well since they assisted a great deal in the funding of my education. If there is any overlap of my day job and my art practice it’s the vendors that we work with for the show. The same man that cut mirrors to make shelving for us was the same man that cut my Golden Kids piece. I think it’s cool that I can give them work on different levels. It’s nice to be loyal.

It is easier for the audience to see the real version if I am the one translating it— it is my story. I have the emotions and the backstory and can easily play it out. It’s also fun hearing people interpret the stories. From their interpretations I get to have many of my own memories triggered.

I\W: Can you talk a bit more about your Golden Kids project that was installed at the Terrain Biennial?
SG: That was one of my first projects that wasn’t a photo or video. My video piece Konnor was in a screening series titled Line of Sight which played during an exhibition called “Dark Fiber” by artists Marissa Lee Benedict and David Rueter at the Chicago Artist Coalition. The curator, Cecilia Vargas, attended the screening and approached me about working together in the future, and a little bit later contacted me about making work for the Terrain Biennial. I was like SAY WHAT?!! I was surprised, excited, and scared because I had never worked in sculpture or installation before. At the same time as I was thinking about what to make, I had been thinking about this Flying Lotus music video directed by Hiro Murai called Never Catch Me which was a music video about two kids who wake up at their own funeral and start dancing around. There were so many young people losing their lives from gun violence and it got me thinking about what heaven might be for a young person. So my sculptures are children who have lost their lives, but they have left a part of themselves to still play and interact with those they left behind. The figures are displayed in playful positions, giving them an eternal way to play after death. The figures are produced out of gold mirror so you can see yourself, make faces in the mirror, take pictures, etc. I’m not sure how I would have been able to translate my photographic skills into sculpture, but this project showed me that there are so many ways to translate an image. My friends Lorenzo Powell and Tramell Winchester helped share their design and construction abilities with me, and it wouldn’t have been as successful without their help.

I\W: Can you talk about how you developed the project #NewGlobalMatriarchy?
SG: Maya Mackrandilal is a transdisciplinary artist and she has this project called Bedtime Stories of White Supremacy where she plays the hindu goddess Lakshmi, sharing new and old stories of goddesses slaying misogyny, racism, and basic white boy fuckery. I thought it was cool how she would play this character. We decided to make up that Lakshmi had a best friend. My character, Oya, is just as powerful as Lakshmi, they see themselves as equals. They are not in competition, they don’t secretly hate each other. This work became the #NewGlobalMatriarchy and Lakshmi and Oya come to Chicago pissed off at Rahm and senseless killings. The goddesses are disruptive and hold protests. Maya and I presented this work in our exhibition “Batten Down the Hatches” curated by Jason Pallas at the CAC. The work was of paparazzi photos of the goddesses as well as statues of the goddesses’ wardrobe. Maya and I will continue to collaborate together and our next project is creating a essay for Jessica Caponigro‘s Feminist Advice from the City of Broad Shoulders book project. I’ve never written an essay before, but writing is a part of Maya’s practice. 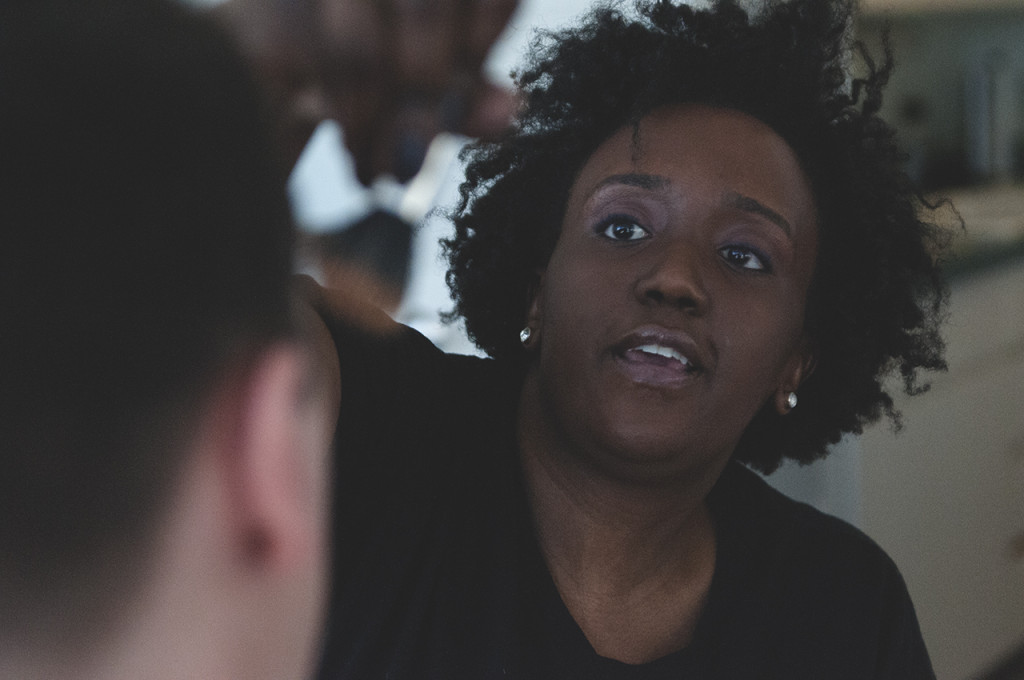 MUwDV: I am interested in you being an artist that is also into blogging, and Snapchat. Is that an intentional part of what you do?
SG: Hmmm intentional? I am interested in engagement, so I think me being involved on various social media channels makes sense because it’s an easy access point into conversations I’m interested in. I believe social media is an integral part of a promotion and a marketing strategy to get eyes on my work. You have to put yourself out there in order for people to take an interest in what you are doing, and all the social media channels allow that to happen if you are willing to put the time into them. I share myself via social media, not just my art. My intent with all of that stuff is to just have fun, talk, and share my point of view in whatever is topical at that moment.

I\W: Does your interest in social media have any ties to your interest in photography? Is it mainly about promoting yourself and work?
SG: I think because I am a curious person that loves to know people’s stories, social media, and my photography tie together. I’ve seen social media create really great opportunities and awareness around what people are doing. For me though it really is about connecting with people. So whether I am sharing smoothie recipes, talking about collaborating with someone I met through Instagram, or asking a style blogger where she got her jeans, what I love about social media is it gives you access to people you wouldn’t have access to.