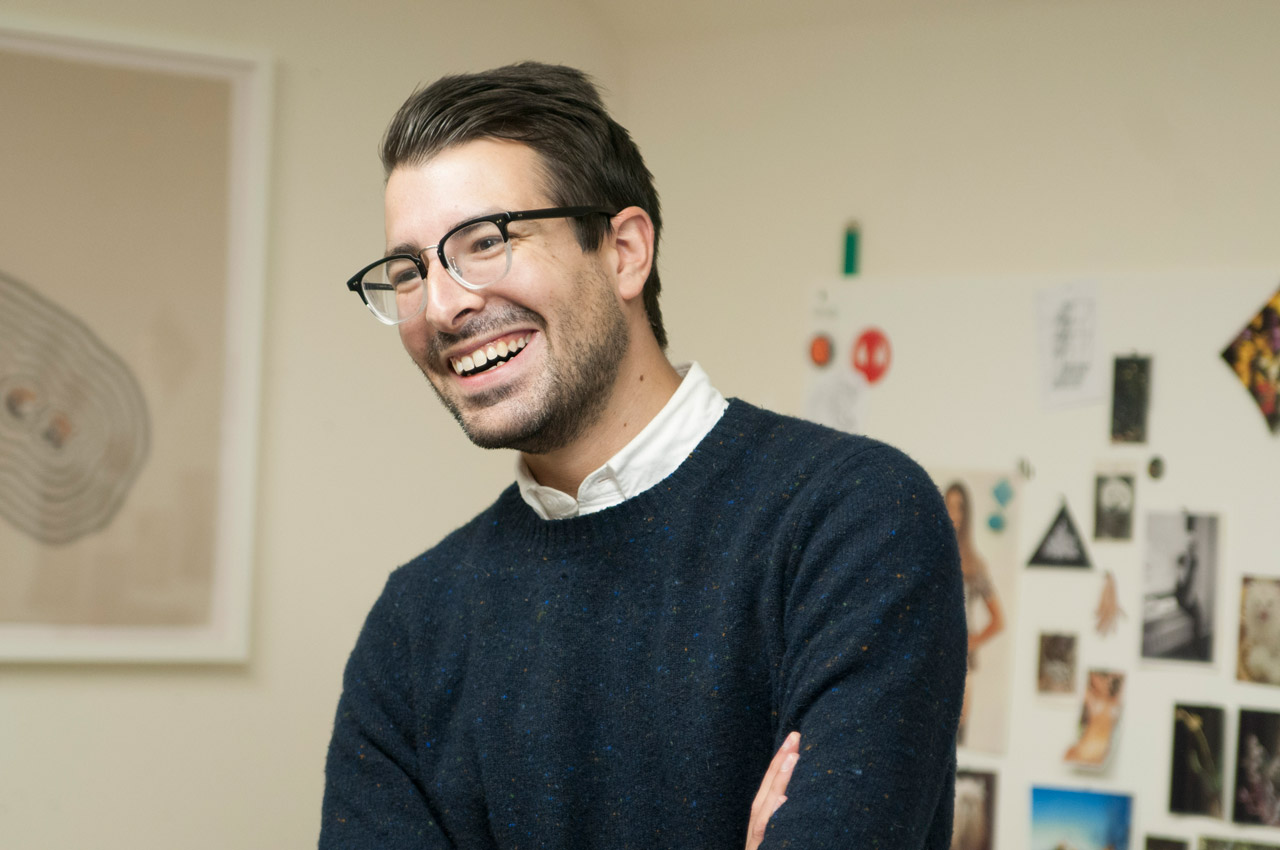 Stephen Eichhorn’s studio is on the second floor of his home in Ukrainian Village. Upstairs Stephen crafts collages that feature cacti, and sometimes cats. Downstairs Stephen’s home features both.

I\W: What was your original artistic focus?
SE: I went to school originally for drawing, and then I did a lot of sculpture. But I didn’t do any sort of collage work until a year out from school. I was just messing around in the studio and I was like ‘Oh! I should be taking this seriously.’ I have kind of been honing that ever since, which has been about six or seven years.

Do you feel like your collage work is what people have responded to the most?
I guess so. That’s what I’ve kind of become known for is the collage work for sure. The collage work has grown as a result of looking for source material. I will find some great images and put them aside until it’s time to start working on that in the studio. For awhile it was a lot of dense foliage-based stuff and that kind of led into orchids. I was obsessed with orchids. At one point there were these cat collages that were kind of a weird joke in the studio. I was making this serious work, and then I would make these stupid cat collages. That led to sourcing cactus imagery for those. I’m not really sure what’s next. I’ve been messing around with the backgrounds, fades, and stuff like that. 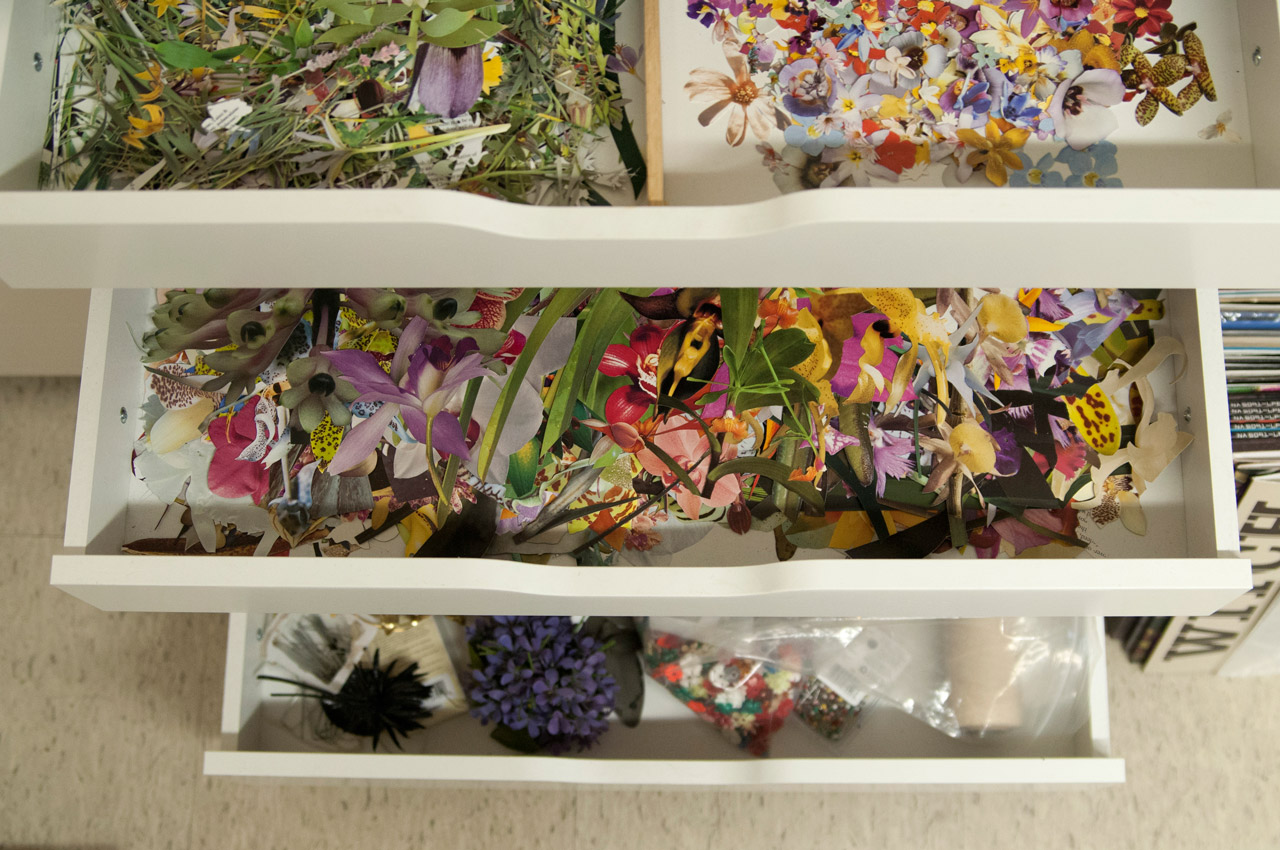 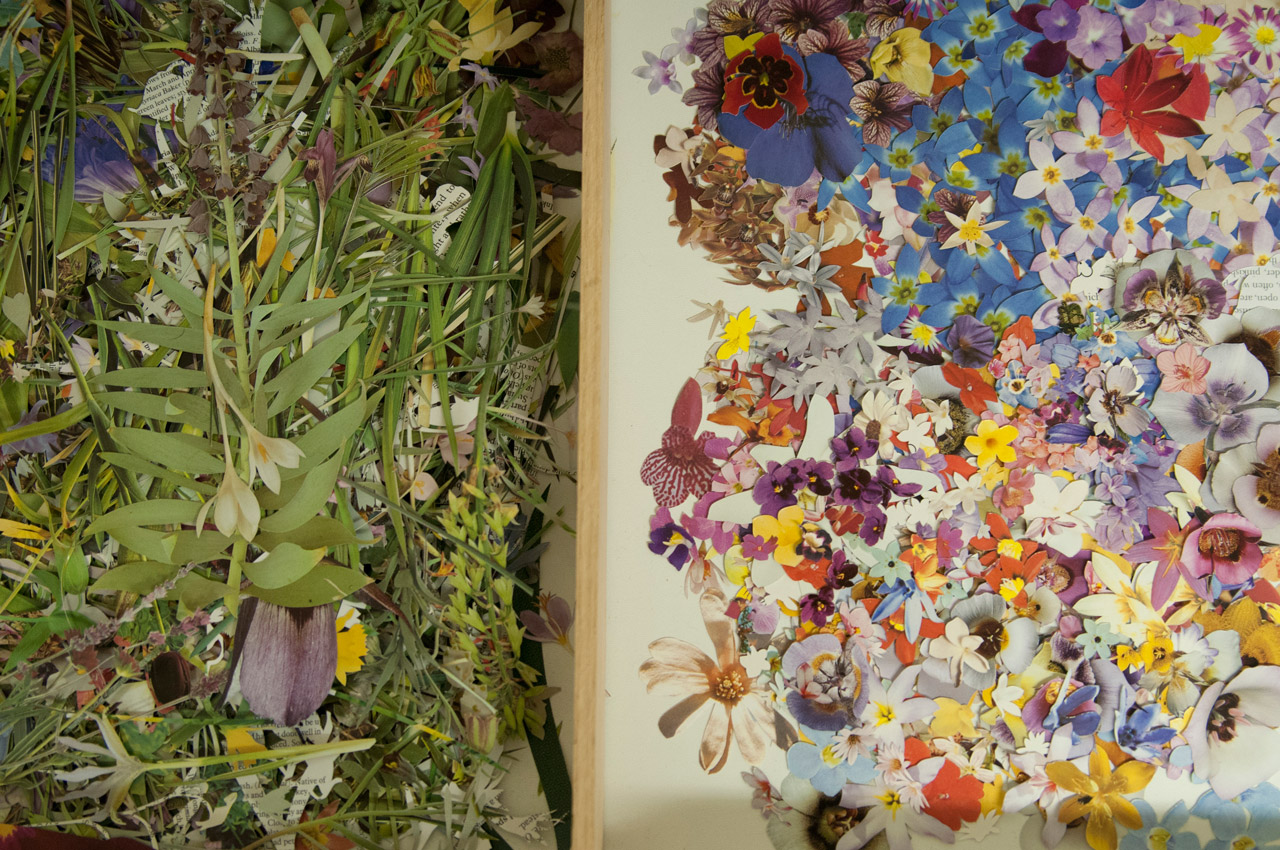 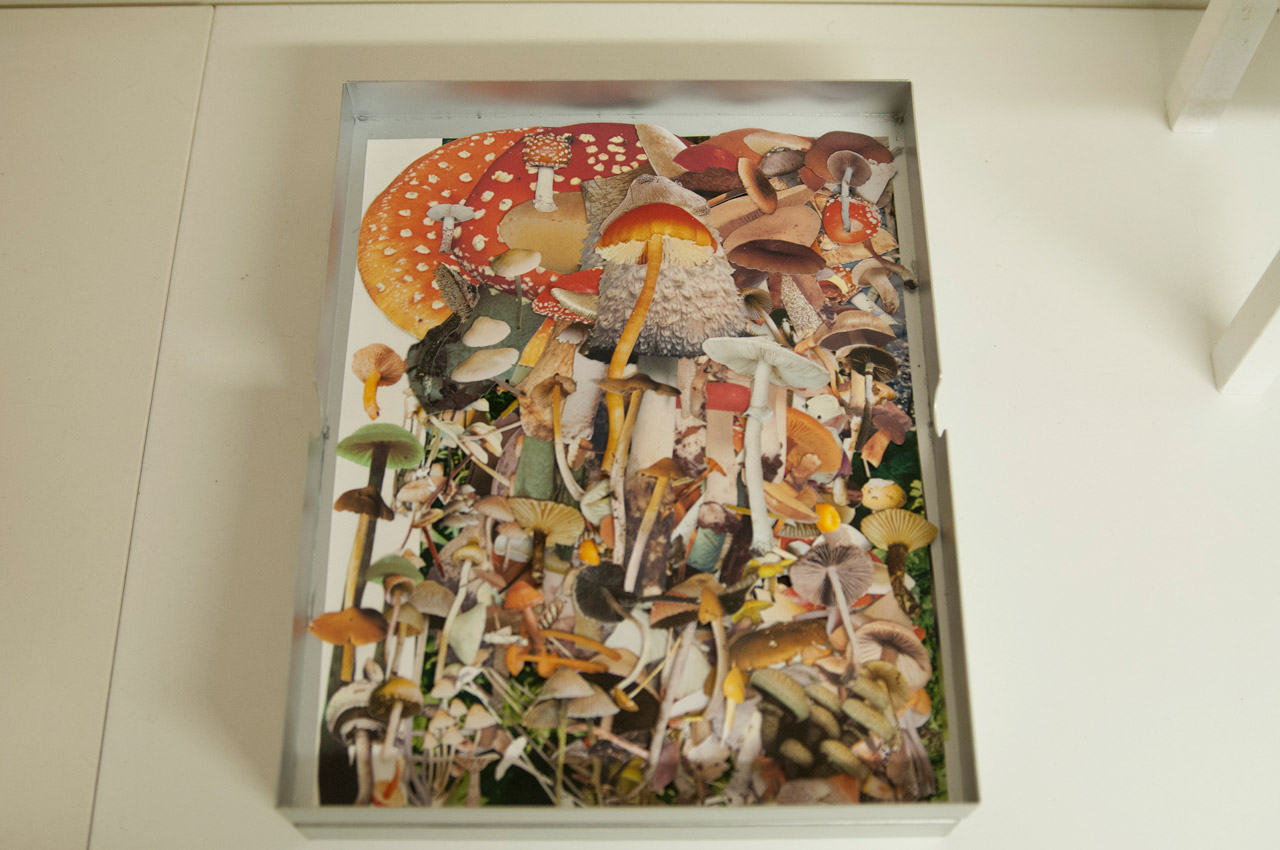 How do you spend most of your time in the studio?
I look at each collage piece as a component to something larger, and so that’s where most of any sort of studio time is spent—cutting stuff out. And those are just blocks where I feel like doing this, or I found perfect source imagery. That will be 8-12 hours a day of just—cutting. That usually only lasts a couple of weeks and either it’s: ‘Oh! I want to make this piece,’ which is usually a response to a couple of pieces that I have cut out, or they will just go in a drawer. When I’m up here [in the studio] actually making the pieces, I’ll do it kind of in one sitting. Another 8-12 hours of studio time is devoted to one piece, and then I’ll come back to it maybe in the next couple of days, but once it’s done, it’s done.

How do you view curation in collage? What sort of inspiration do you have for that curation process?
That kind of goes all over the place. I end up watching a ton of movies when I’m cutting stuff out, and especially as a timekeeper. There is quite a bit of cinema that ends up creeping in really subtle ways. I also end up listening to a lot of metal and a lot of really drony stuff. I’ve been really into African Funk lately. Some of that ends up creeping into my work as well because of this visceral response to what my sonic environment is. Also conversations I have with fashion designers and collaborations have lead to other things.

How do you keep such a steady hand for 8 hours…while listening to metal?
It’s really meditative. It’s super relaxing to me for some reason. The one thing, in terms of cutting stuff out for collage, is getting far more detail-oriented with it, so it’s not so chunky. In collage, I love some of that, but I’ve learned that’s not my style. I get a very different type of satisfaction from cutting something out to where it looks totally photoshopped. That’s the tricky thing of mediating this work. I haven’t had a website for a long time because I’ve had work shot and reshot to make sure it looks right, because otherwise it would just look like a weird digital file that I uploaded. You loose scale in that digital translation.

What do you use as adhesive in your collages?
Spray photo mount for the big panels, anything larger, and then for the smaller stuff it’s this German adhesive that’s used in bookbinding. It’s crazy archival and really strong.

What’s your defense of collage work?
I appreciate the fact that when you look at some of my work it doesn’t look like collage, but then when you are up on it, there is that moment of noticing that it is all actually layered and hand-cut. There is my hand present, but that’s not so overbearing. There’s not, or I hope there’s not, an ego present. In terms of using found imagery, which can get exceedingly tricky, that’s where I try to reduce them down to almost this stock component. It ends up going through several rounds of being cut and being removed from its context. It would be hard to track some of these images back to their original source.

Where do you get most of your images?
From a lot of books, orchid books, cacti books—at one point I was using these photo wallpaper pieces to get really large palm fronds. Everything is original from its source. In terms of any found stuff, it still gets reduced down to an image plate and mediated…getting away from relying on the nostalgia of the image to make it good. 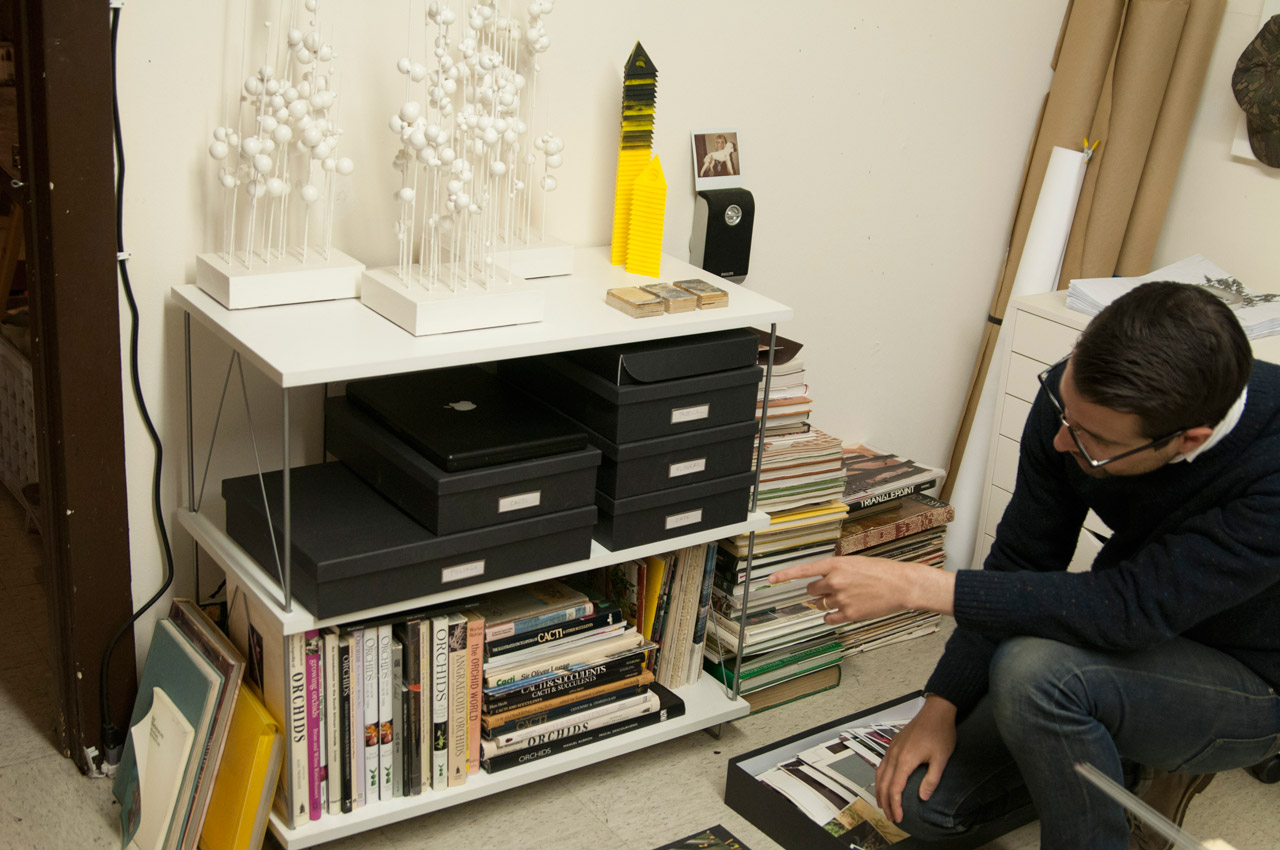 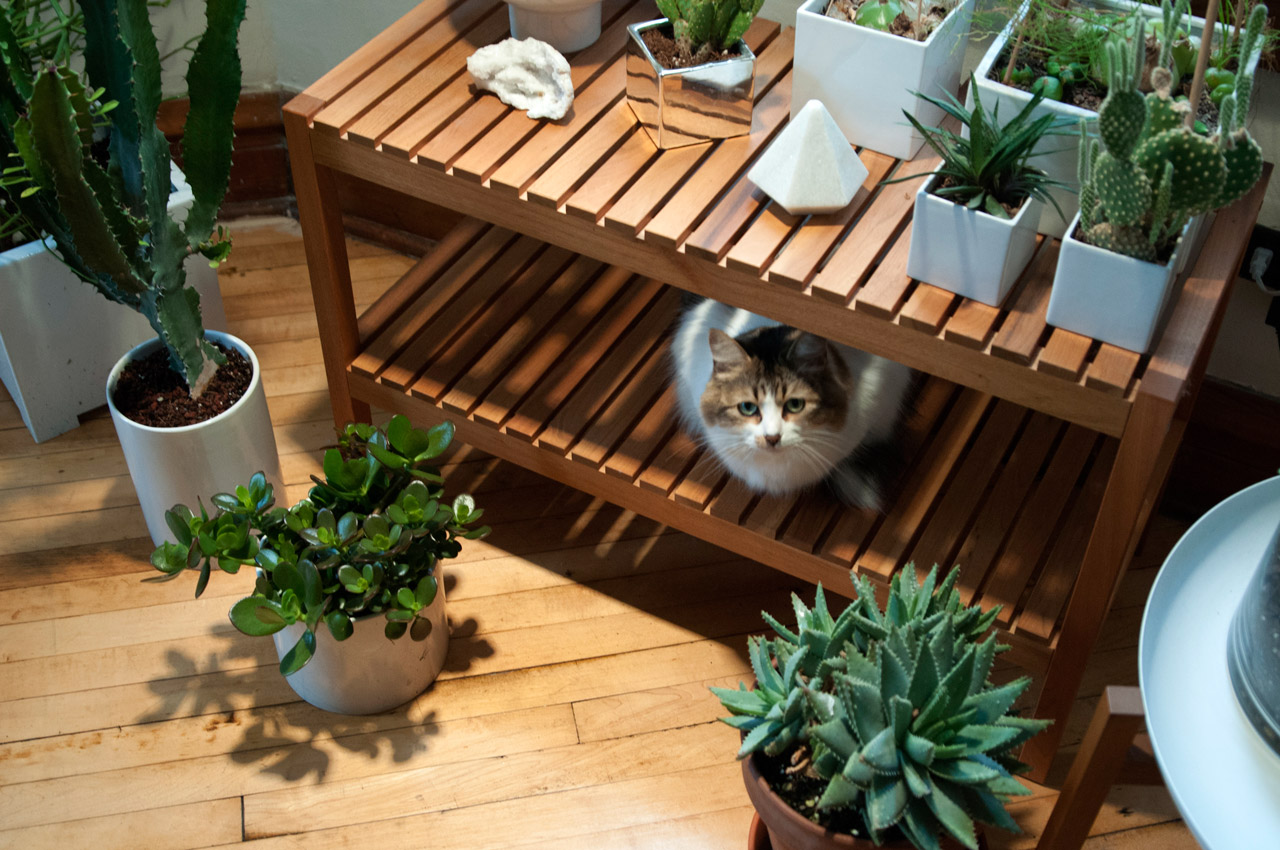 Your work is now up in the Damen Blue Line Station. How do you think people interact with your work in such a transitory environment?
Some of that work I think of as being really meditative. Especially the orbs, which I can get kind of lost in while making. An interesting predicament to be in is to think about how this stuff exists in this very transitional realm, but it also might be this nice break. There is really no space to hang out with that work—which I kind of like. I like it being this ephemeral experience. It is just there, especially if you use that stop regularly. It was also a nice way of testing out some newer work that was in the studio. The texture on the orbs is that really crappy granite spray, but then I sand it down where the collage is going to be and lay it on there.

Did they approach you about that? Or how did you get involved?
That was through Johalla Projects, Tyler Blackwell approached me about it. The gallery I had been working with, Ebersmoore closed in the spring. All I basically had to do was hand off imagery in terms of, ‘This is what I like, what do you guys think?’ From there it was just proofing. They have sponsors set up and then CTA installed everything.

I appreciate the fact that when you look at some of my work it doesn’t look like collage, but then when you are up on it, there is that moment of noticing that it is all actually layered and hand-cut. There is my hand present, but that’s not so overbearing. There’s not, or I hope there’s not, an ego present.

We were driving to close on our house recently and I was like ‘Let’s drive by the Damen stop, they have been saying for weeks that this stuff is going to go up.’ They were in the midst of working on it, and I jumped out of the car and I got a photo of them hanging the work and kind of being awkward. 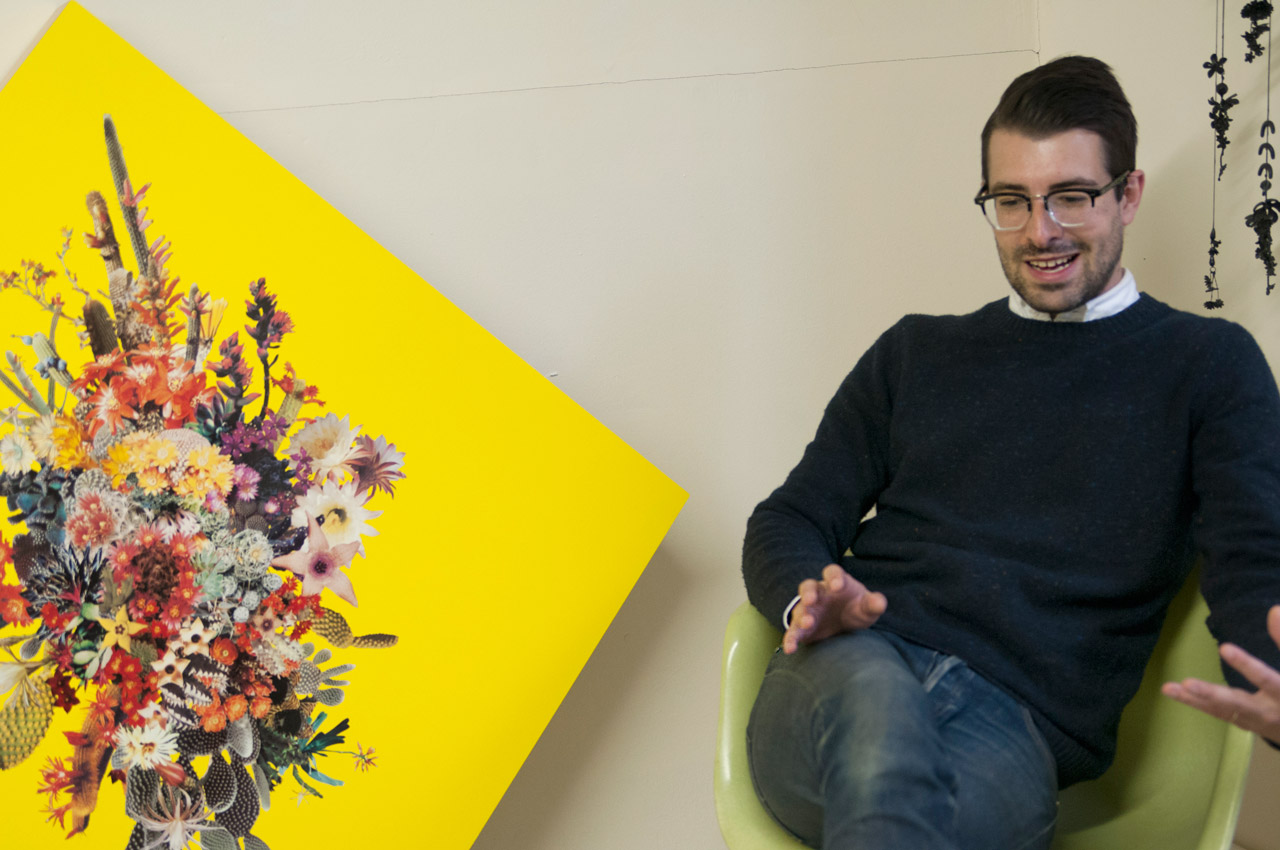 How were you first attracted to art as a kid?
I did that typical boy thing of drawing the expansive wars within wars within wars within wars. I ended up getting really fascinated with toys and where toys came from. When I was in 7th or 8th grade, around the time of mechanical drawing in school, I ended up working for this toy place in Cincinnati, Ohio. I was this unpaid intern kid for a summer or two. I ended up doing stuff with them and they definitely pushed me in terms of craft. It was that meditative over and over, practice makes perfect kind of self-teaching, but with guidance. That kind of solidified any sort of art stuff for me. 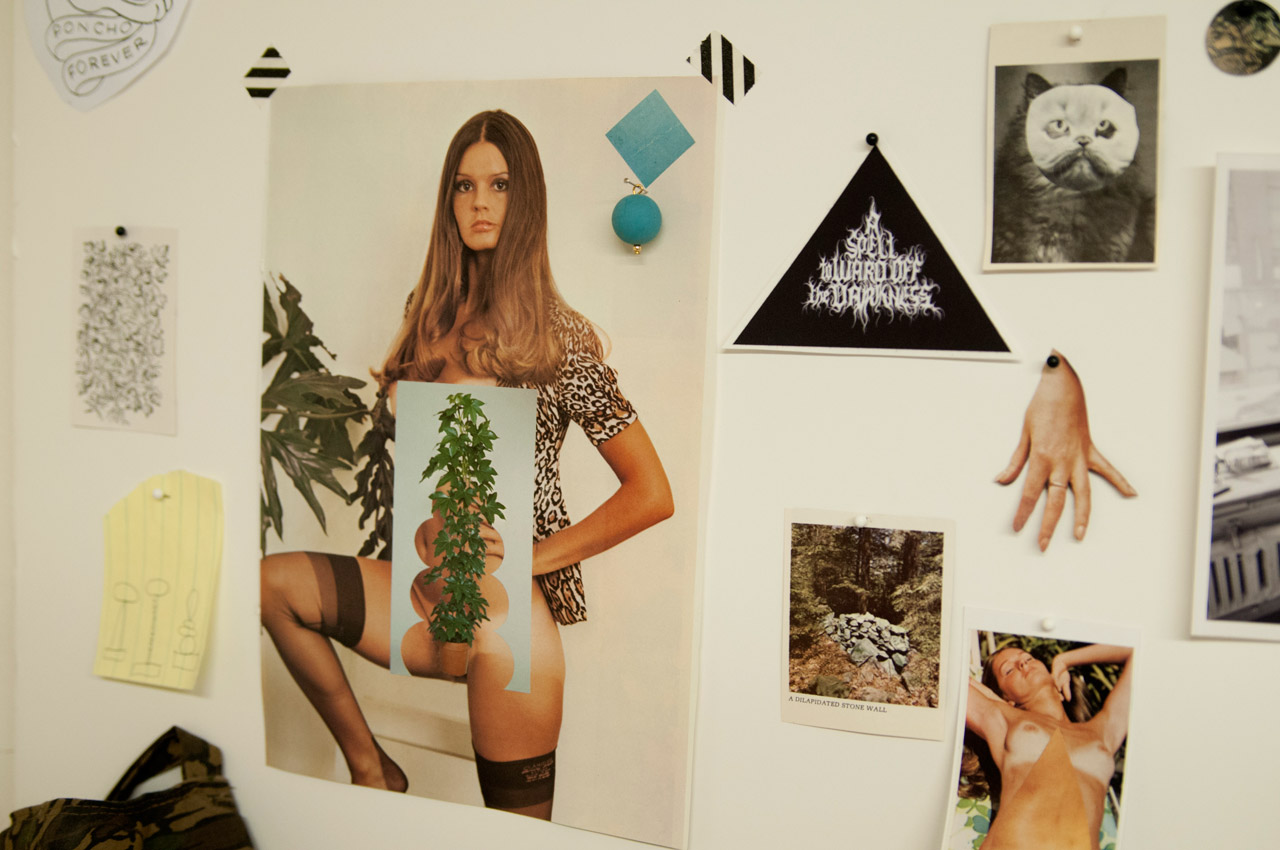 Are you working on any collaborations right now?
There is this linens line called Unison and we are doing a whole line of fabric coming up. It’s table linens and some pillows and stuff like that. It’s again collage work that’s been scanned, and I think they worked with Marimekko, so their approach is kind of this old school screen printing way. They are shooting their catalogue, so I was getting to see all of the stuff in real life. Stuff like that that is kind of this whole other facet of studio life that I didn’t really imagine I would be doing. 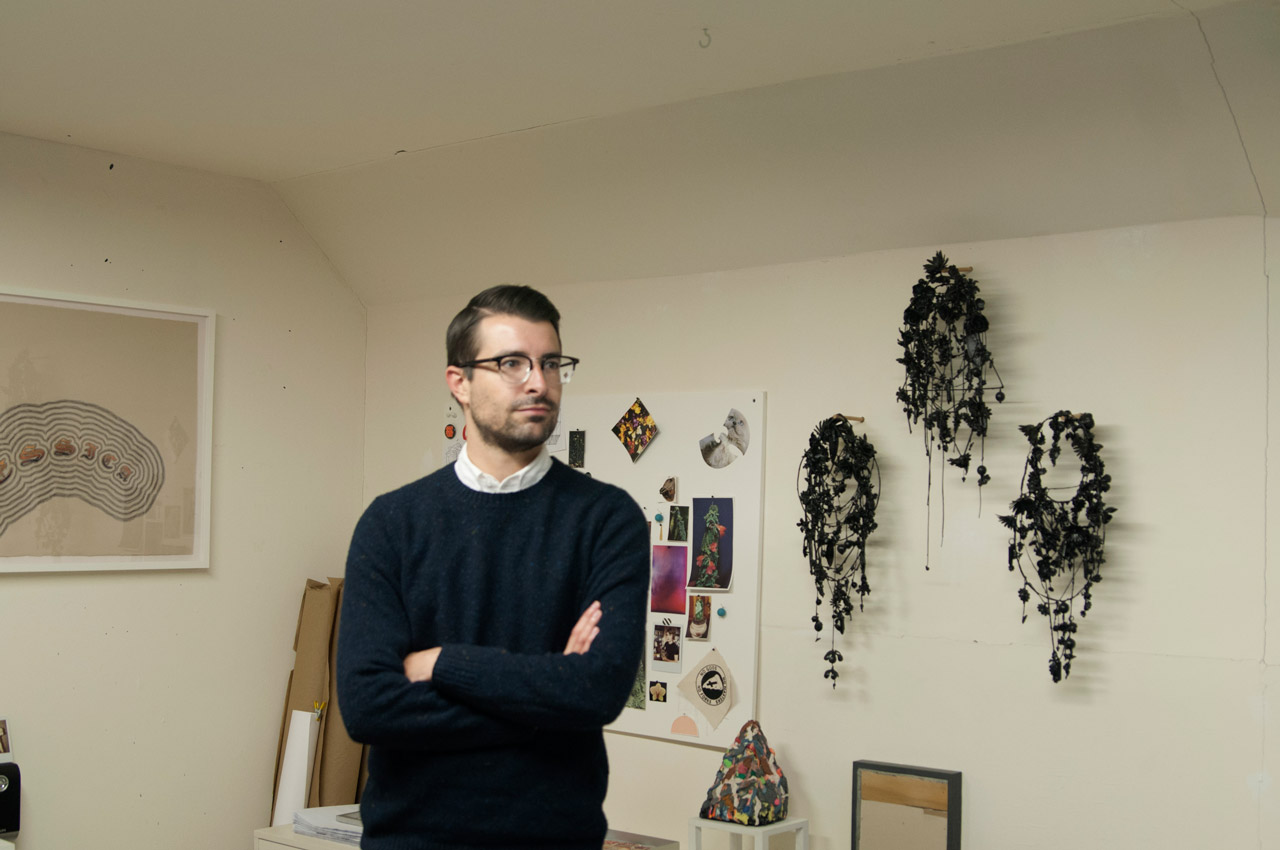