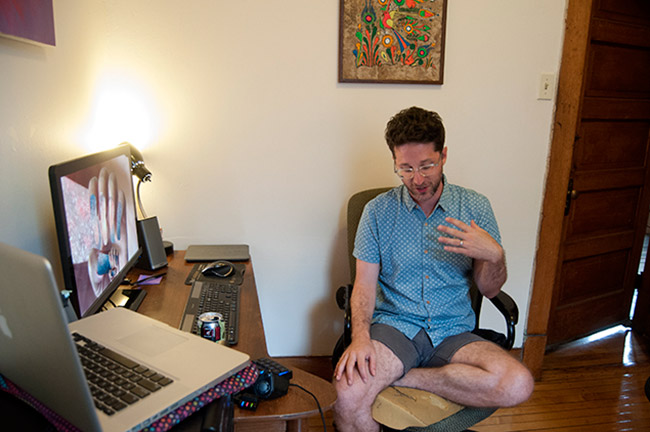 Tony’s work flashes, pulsates, and confuses, whether in person at one of his performances, or while watching a video of his on screen. Influenced by music like krautrock, Tony creates looping videos that seem to stretch time, placing you inside a moment for far longer than you feel comfortable. With a studio located both inside and on the back porch of his Pilsen home, Tony has space to edit his psychedelic video creations as well as build his recent triangular, cubed, and circular disco balls.

I\W: How did you make “Special Lady Time” so seamless?
TB: It’s like that recursive loop, which is something that people have been doing for a long time and I had always wanted to create. This one had a lot of elements to it that made it easier to pull off. To make the loop seamless you want to make the original image disappear on the horizon line in the middle. It makes it 100 times easier to make it smooth. To get the illusion that it is starting really big and then going really small you have to make the scale parabolic. If you make it linear, it will be really big for a while, then all of a sudden zip into being really tiny—which makes it jerky. That little bit of math makes it feel natural. I put footage from the new Cosmos as the background for the nails. Their universe simulation footage is such hot shit. The loop is pleasurable, even though it is the same thing over and over. There is something really therapeutic, or certainly psychedelic about it.

What is your obsession with loops?
There are loops in almost everything that I have done in the last few years. I had originally started out as a kid making comedy videos and recreations of Cops. It was very manageable, you get to have good guys, bad guys, whatever. I always had this traditional relationship to time in movies in that way, but then also had this love of hip hop and sampling and minimal psychedelic krautrock—German psychedelic music that has repetitious beats. All of the music I seem to like has a lot of repetitive elements, so I think the thing that resonated with me was this groove you could catch if the loop was good enough. I have always approached it where the starting point was wanting to find my own groove to focus on, and then use that as a building block to construct a narrative or tell some other idea. The other thing I like about loops is the ability to pull time. I don’t really like to slow things down, but I like to make things last longer than they should. 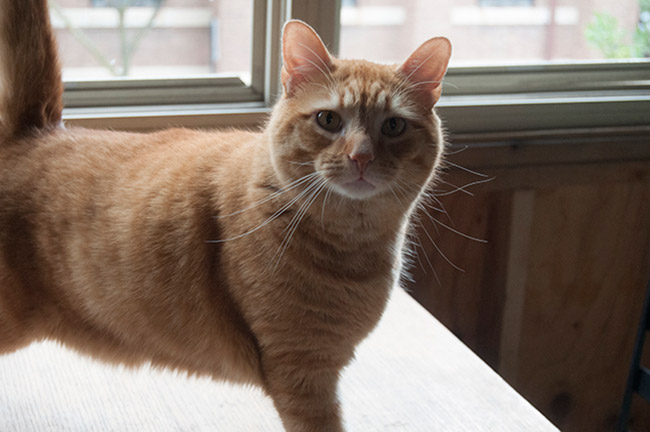 What was the process behind your piece “Gurney Halleck Shreds?”
That is me wanting to make a piece longer, and also make a joke. I like to tell jokes, and I like to have a sense of humor in my work. The movie is notoriously terrible, but I don’t hate it like some people do. The clip I used was a deleted scene in the extended version that is even more agonizingly long than the one seen in the film. There is this rule called the 180-degree rule where you have an axis down the scene and if you are shooting conversations you can cross that line, but you have to show the audience you crossed it. If all of a sudden I cut to being on the other side, the audience is confused and it breaks the illusion. In that scene I flip one shot every time, so when it cuts back to them, they are on the other side of the room. Because of the ambiguity of that one cut, it lets me break that rule or make that rule malleable. It can go forever. 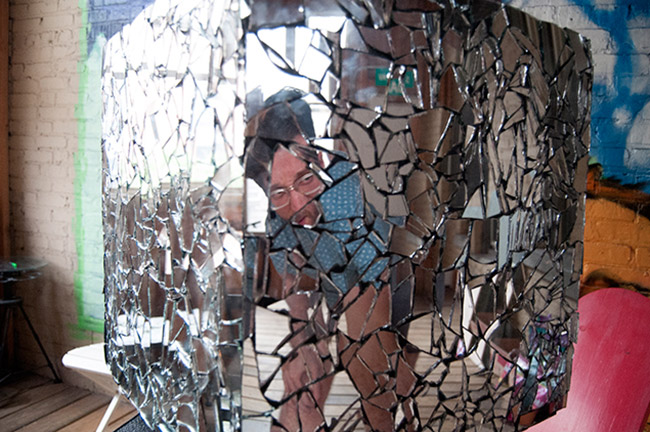 Is appropriating clips from movies your way of forcing collaborations?
Not always. I made two pieces that were forced collaborations. I really love music, and music is a part of my practice, but I can’t play it. I like to mess around and have been doing it for 15 years, but I still can’t play anything. I have no ear to play with people, and I am too nervous. I still have a big music influence and and want to participate in it, so what I did was co-opted things from my childhood that made me interested in that stuff in the first place. Those are the forced collaborations. I did one with Eddie Van Halen. This piece, “Eruption,” has all of the stuff with loops that I am interested in—finding something that I like and then making it last longer or using it as a building block to build something else. This also relies on a visual trick that if you take a loop and each time you loop it if you invert it and make one a negative, you can create the illusion of continuous movement. You can make a bicycle look like it is going down the street for forever because the flash will trick your eye into thinking that is happening. My subject matter comes out of fandom, or real love for this subject. I love rock and roll, I love science fiction. Eddie is showing me all the things he can do with a guitar in that video and I am showing off all of the things I can do with an edit.

How do your installations and performances mock what you do digitally?
I am really interested in flicker. I have always really loved it. I don’t know if my parents put a strobe light in my crib or something, but I really love flashing lights. That also is a big element of structural film, and what I was originally interested in when I started to make art and movies or whatever. What I started to find is there were moments in my movies where I wanted to be able to use flicker and then start to tell a story with it, or us it in a way that wasn’t a materialist use. I wanted to use it in a way that shows how it functions physically for people, but it can also be used as a narrative tool, or a way to completely shift cinematic space into another zone. You can get people to feel like they are in a certain comfort zone because you are hitting them with editing styles or tropes that they are used to, and then drop a bomb and really shift a reality for them. In the performance stuff I am much more interested in pure physical experience. In a movie theatre you never quite know what the context is going to be. Is this going to be the ideal screening? Is it a dark room? Is it a room with white walls? If you are doing strobing stuff it makes a huge difference. When you are live you can control the space, and I feel like that is when it is my time to really create a more physical thing. I am there, I can see what the audience is doing and I can modulate what I am doing and make them really flip out.

What aspects of video have you tweaked to enhance your performances?
I became more aware of what you could do with computer programing and live video stuff and I figured out that I could just make software that would allow the audience to feel what was happening—just by turning a dial. That is why I push the more raw psychedelic stuff into live zone because I can control it live now. That also points to that relationship I have with live music. Here is my way of getting an audience to have an experience that I can guide. I wrote this software that has gone through many iterations now, and is really the backbone of many of my installation and performance works. You tell the program rules, and you give it values, and you can play it like a synthesizer. I did a performance at Brandon Alvendia‘s Storefront that had a weed pipe and these solo cups, because minimalism is always so serious. I love the serious shit, but I also have a sense of humor. I think a lot of that pleasure isn’t too different from the pleasure that people get when they get fucked up, so that performance was having it all. 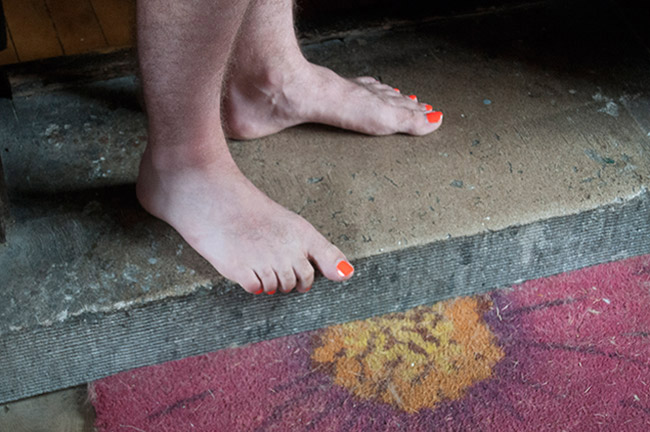